Actually, I’m not even sure whether it’s a town or a village. Santillana del Mar (30 km from Santander, the capital of Cantabria) is most often mentioned as a town, while on the other hand it is included in the Club of the most beautiful villages in Spain. It was also described as the most beautiful village by the famous French writer Jean-Paul Sartre in his philosophical novel The Nausea from 1938.

Even with the name itself, it’s not quite easy. Santillana del Mar is said to be a town of three lies. According to its name, this town should be holy (santo), flat (llana) and by the sea (del mar). But it’s not flat – you’ll understand when you walk its streets. By the sea? The sea is a few miles away, and I think the only holy person is St Juliana – we will hear more about her later.

Not only Sartre loved this place; in non-pandemic years, it is said to be visited by crowds of foreign and domestic tourists who go here on trips by car or bus from their seaside resorts. Therefore, a visit to Santillana is recommended early in the morning or late afternoon, when most tourists have returned to their hotels. The car must be parked in the parking lot, entry to the center is allowed only for residents and for guests in hotels with a garage. 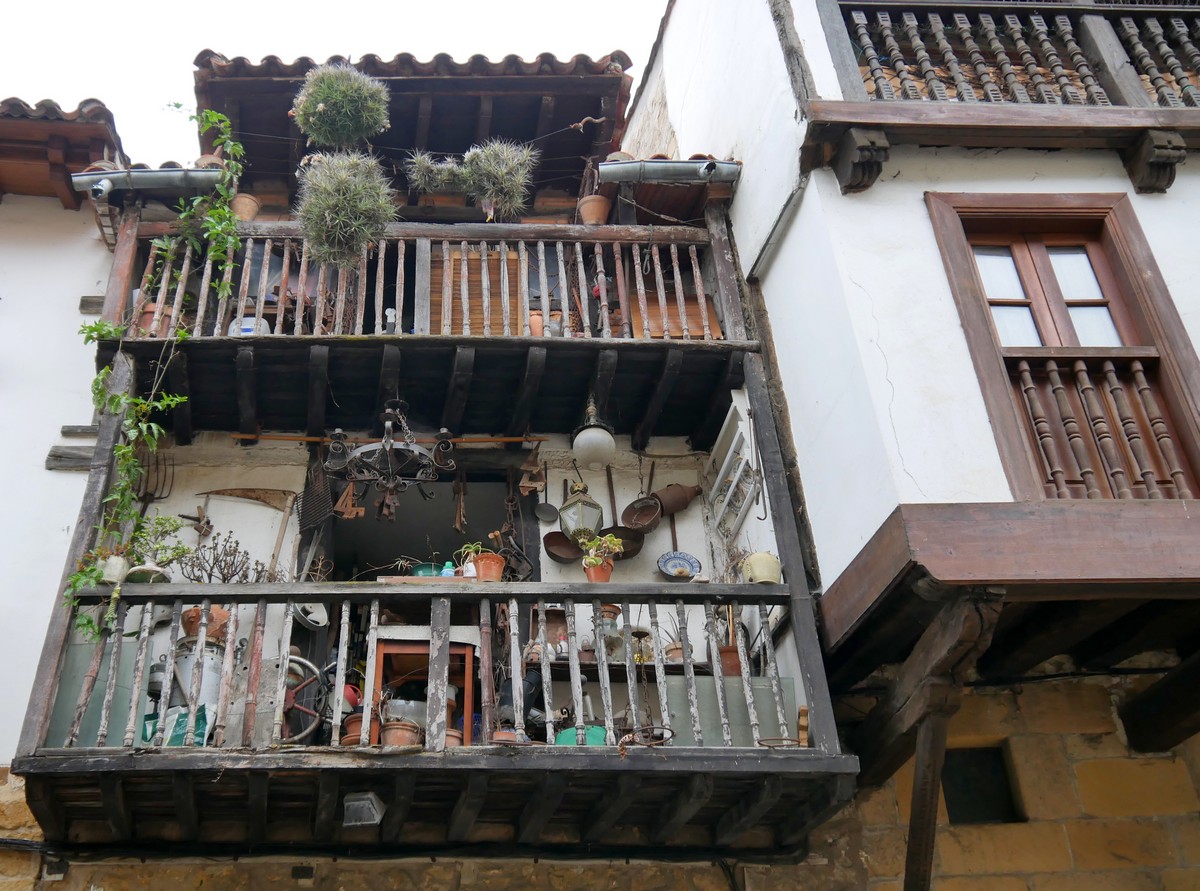 We arrived here in the morning, it was raining lightly again, the town was empty. Raindrops sprinkled not only the abandoned playground but also the place where adults play skittles. A popular sport throughout Cantabria is widespread in four variants: bolo palmo, pasabolo losa, pasabolo tablón and bolo pasiego. Both the skittles and the balls are made of wood. Unfortunately, I can’t tell you more about the game, as no one was playing it in the rain. 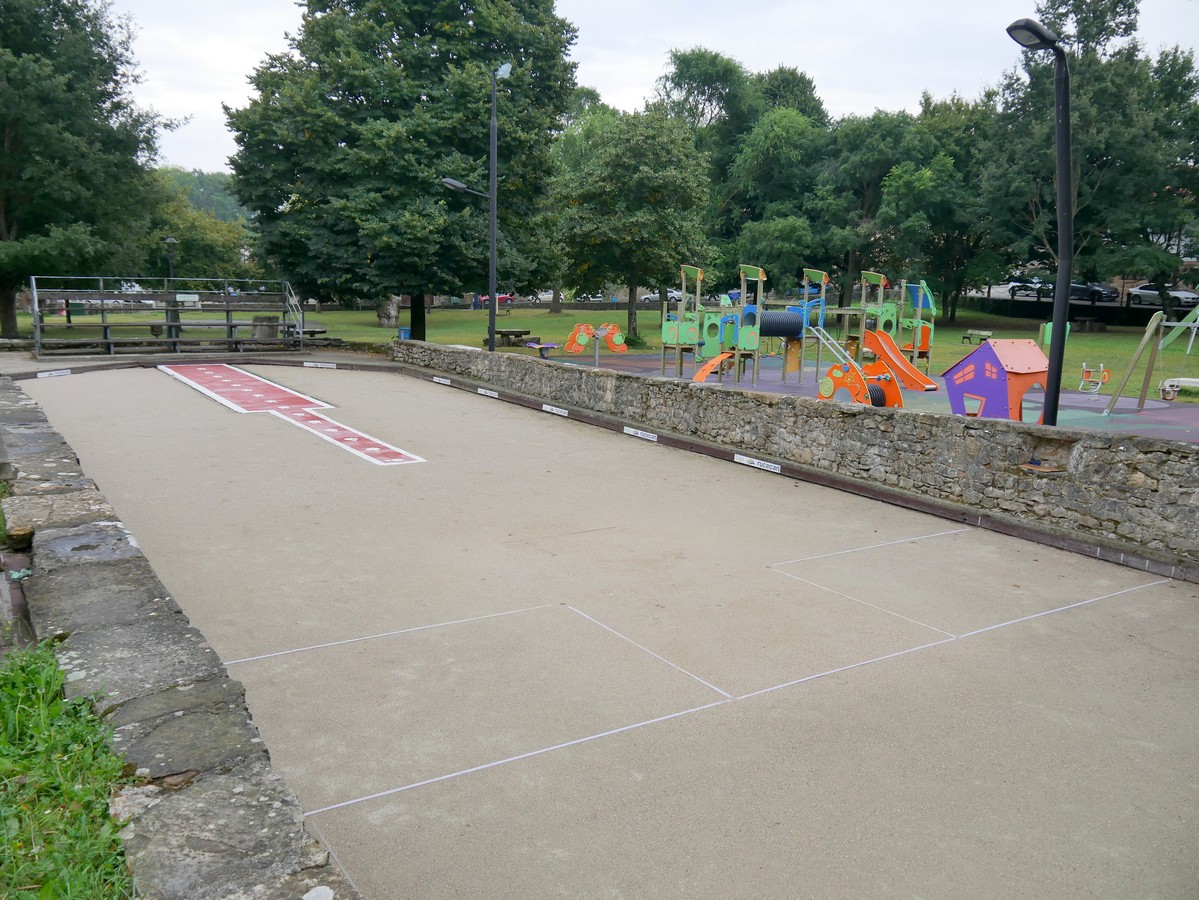 However, the main attraction for which so many tourists come to Santillana are not skittles, but a walk through the cobbled streets with old stone houses. The way they look today is just like when Jean-Paul Sartre walked here, but they looked like this even long before him, in the Middle Ages. The historic center of Santillana is one of the best-preserved medieval places in Cantabria, in fact, the town resembles a living museum. 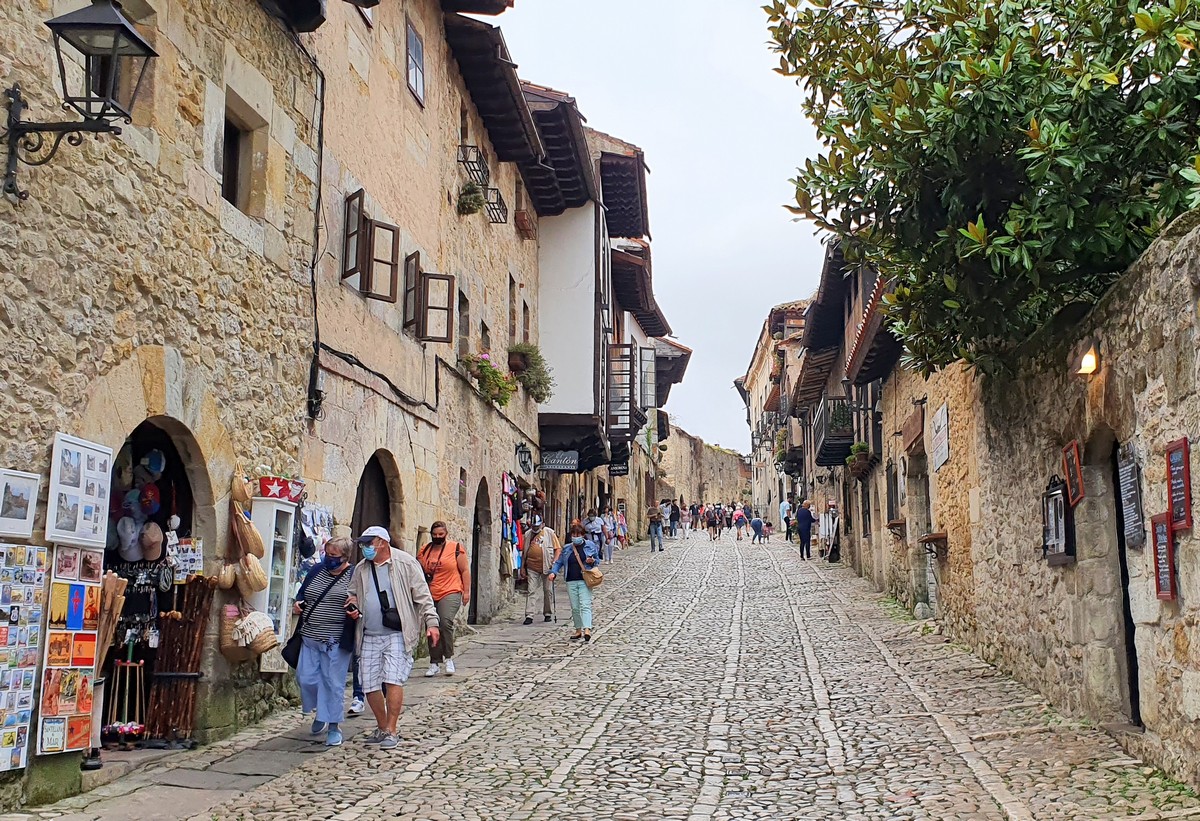 The most beautiful streets are Calle San Juan Infante and Calle Cantón (I recommend comfortable shoes, no high heels!). They are lined with old medieval stone houses with wooden balconies. Some houses were built of bricks, some are painted white. Pictures will tell you more… 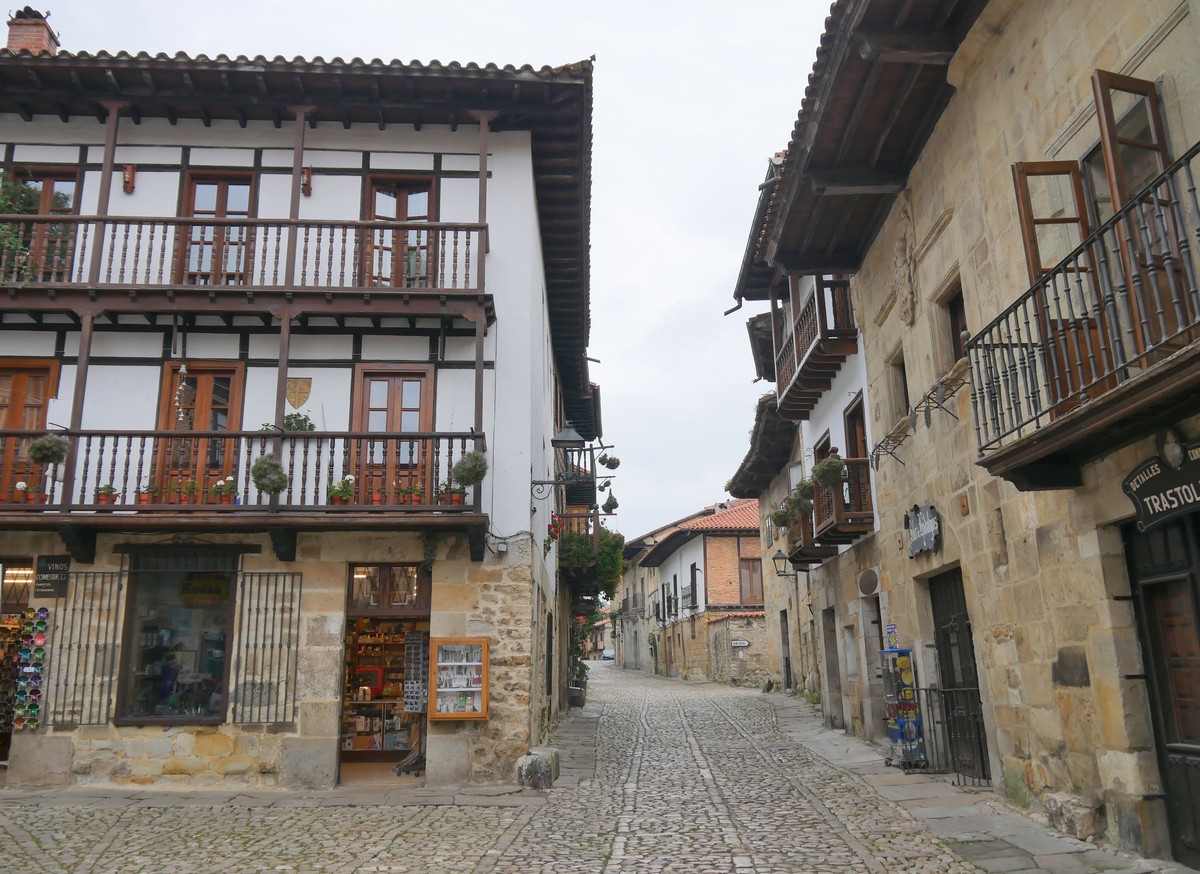 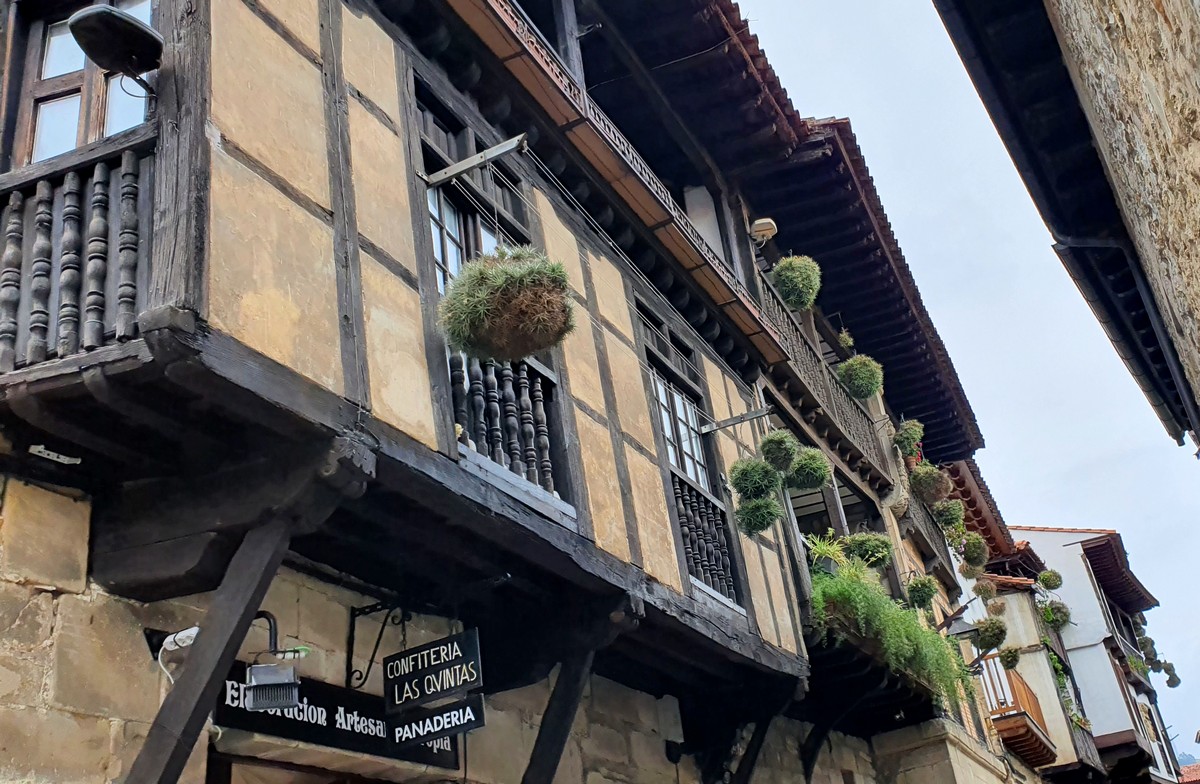 What fascinated me were the large green balls that hung from many balconies – air plants (tillandsia) that collect all the nutrients from the humidity. They even sell them here, but I was not sure whether they would survive on our balcony in Vienna… 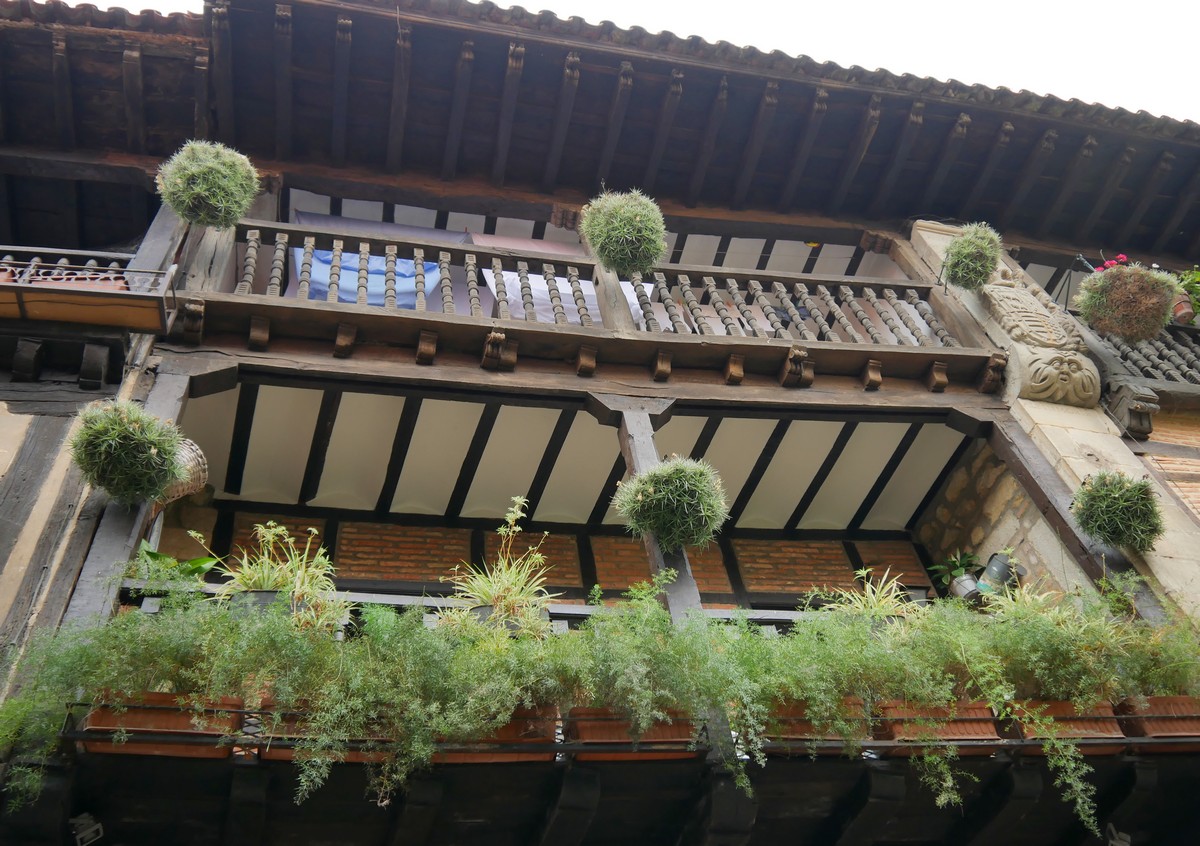 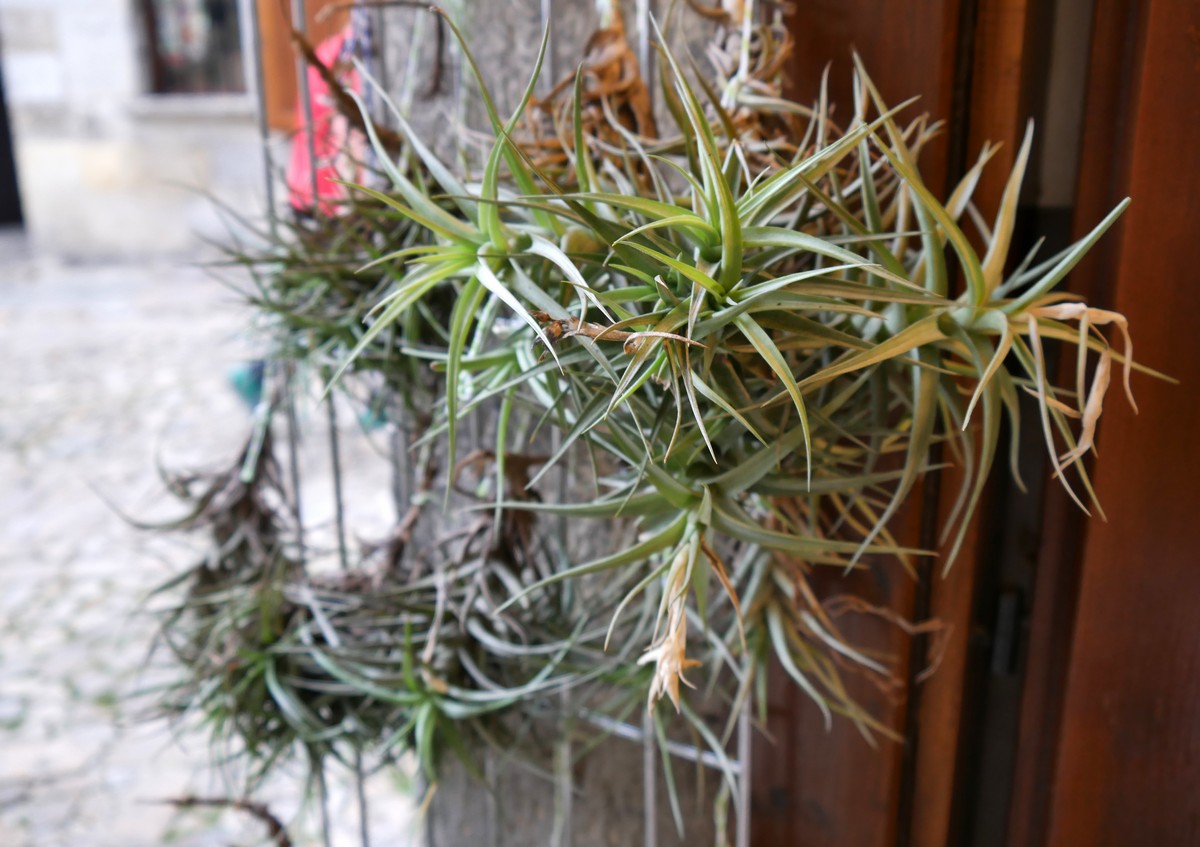 The local people used to make their living from mining or cattle breeding. Knowing they had nothing to lose, they left their homes and set out to the New World, especially Mexico, to try their luck. Some succeeded, returned rich, and wanted to show off their wealth. Therefore, they ordered shields to be made on the facades of their houses. The bigger the better. 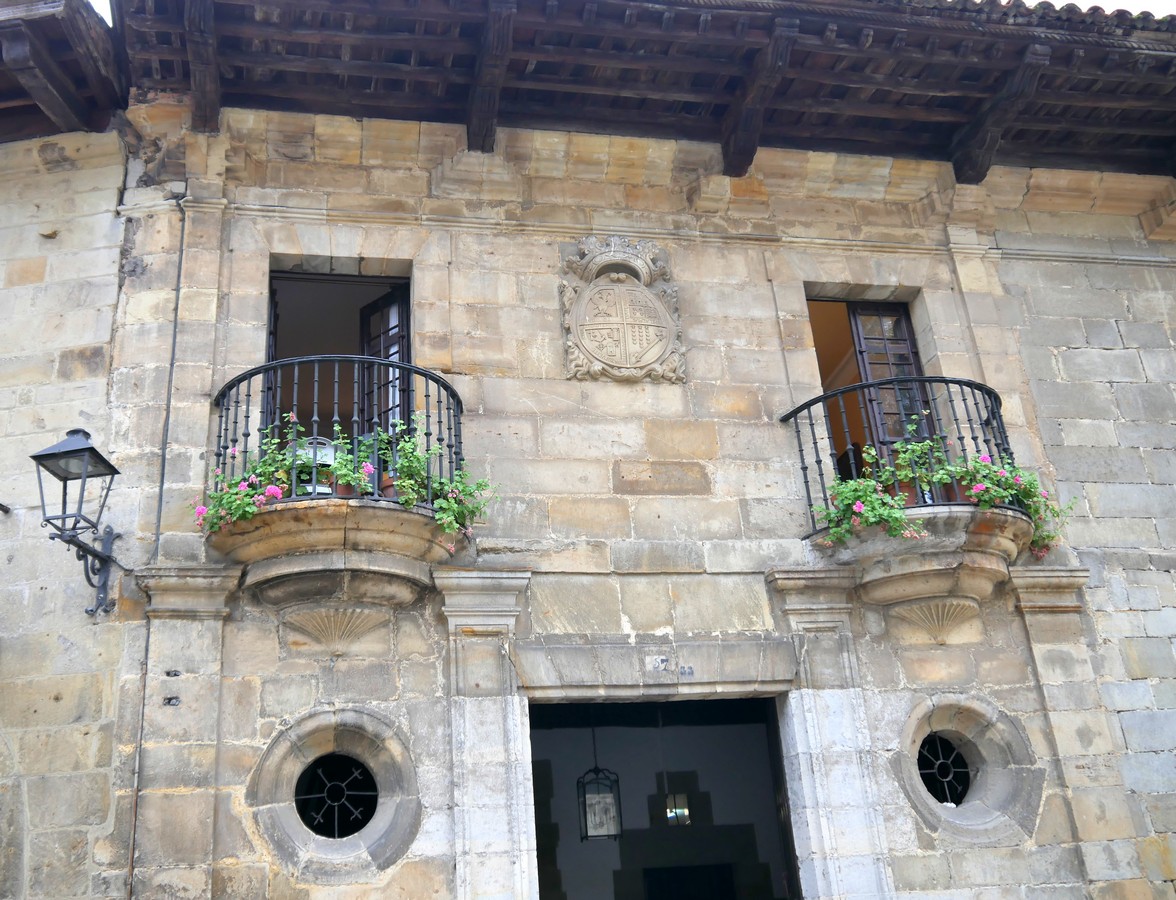 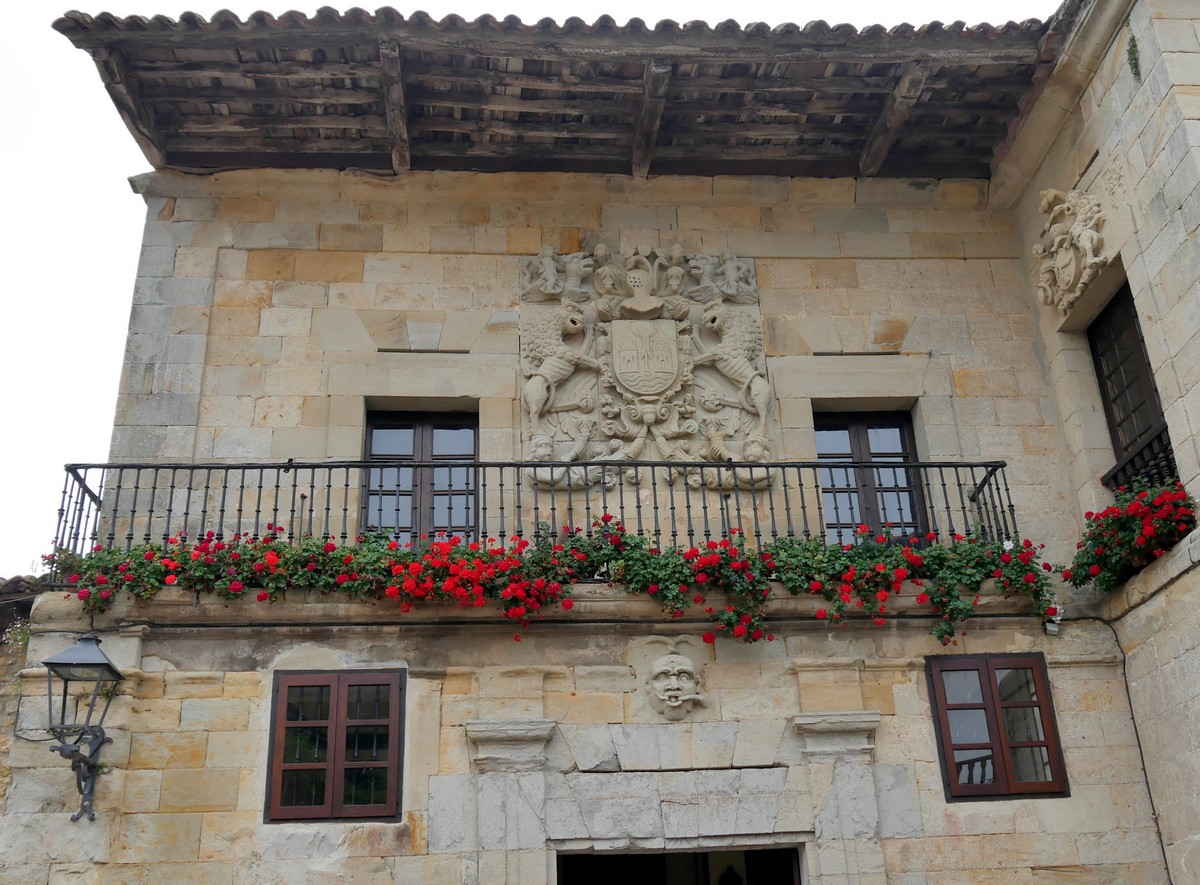 Other important buildings in the town are the two Gothic towers – Torre del Merino from the 14th and Torre de Don Borja from the 15th century, which currently houses a cultural center.

Today, some houses are small hotels with 10 – 20 rooms, in the others, there are shops selling souvenirs and various local specialties. Directly on the street, a 16th-century water reservoir has been preserved from the past, where local women used to go to wash. Even cows came here to drink at that time when they freely roamed the streets of Santillana.

You should definitely make a stop at the house Casa Quevedo, where “grandma’s breakfast“ is offered – a glass of milk (1 €) and a cake (1 €). These are specialties typical of Cantabria – bizcocho – a sponge cake, sobao – a butter cake flavored with anise liqueur, and quesada – a cake with a pudding consistency flavored with lemon zest and cinnamon. 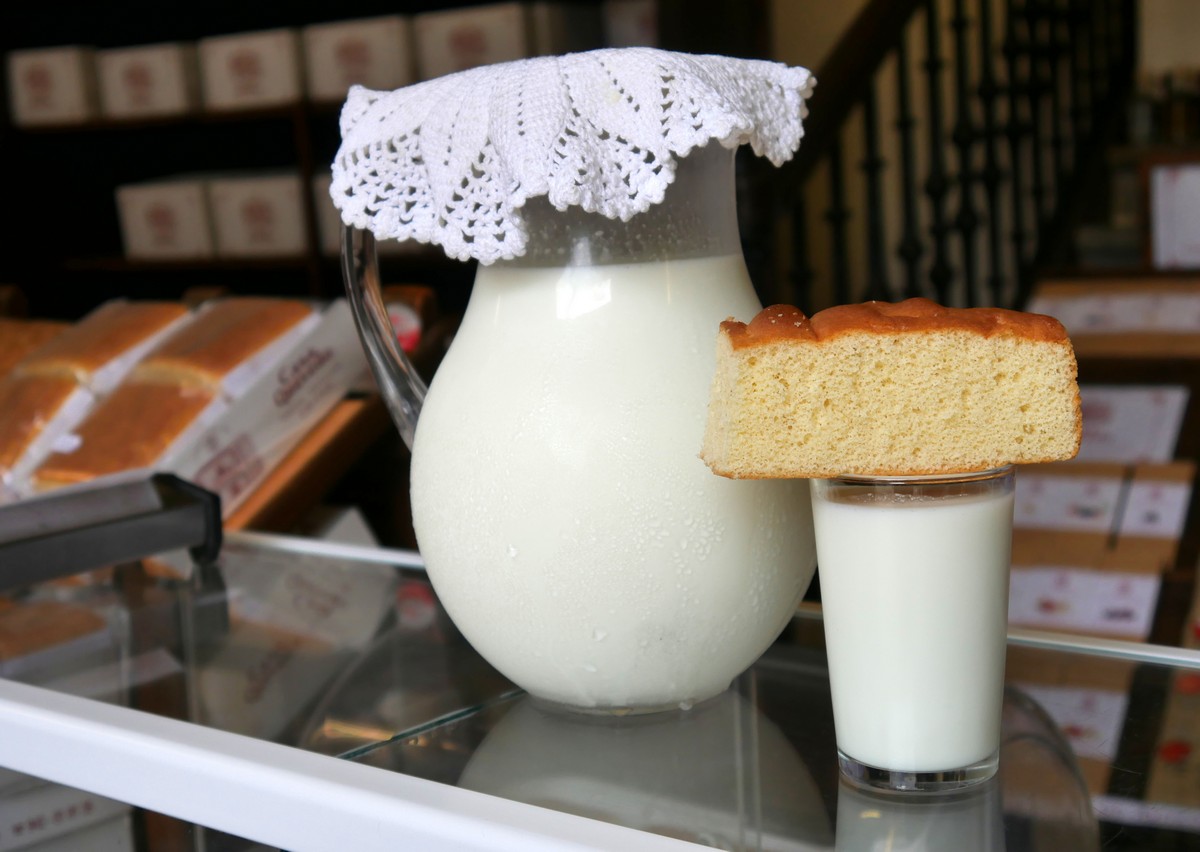 Antonio served us. The dairy was founded by his mother-in-law in 1950, mainly for tourists who stopped here on the way to the Altamira Cave. She had collected all the glasses from her kitchen, each one was different, and offered fresh cow’s milk. On the first day, she did not sell anything, the next day, two glasses; the neighbors were mocking her… However, Mrs Maria Luisa did not give up, which was good because the family shop still works today. It houses also a small museum – in addition to various milk jugs and milking aids, you can see a knight in full armor. I had more questions, but we did not want to impede, as a queue had already formed behind us. Well, it is difficult to resist an offer that takes you back to your childhood… 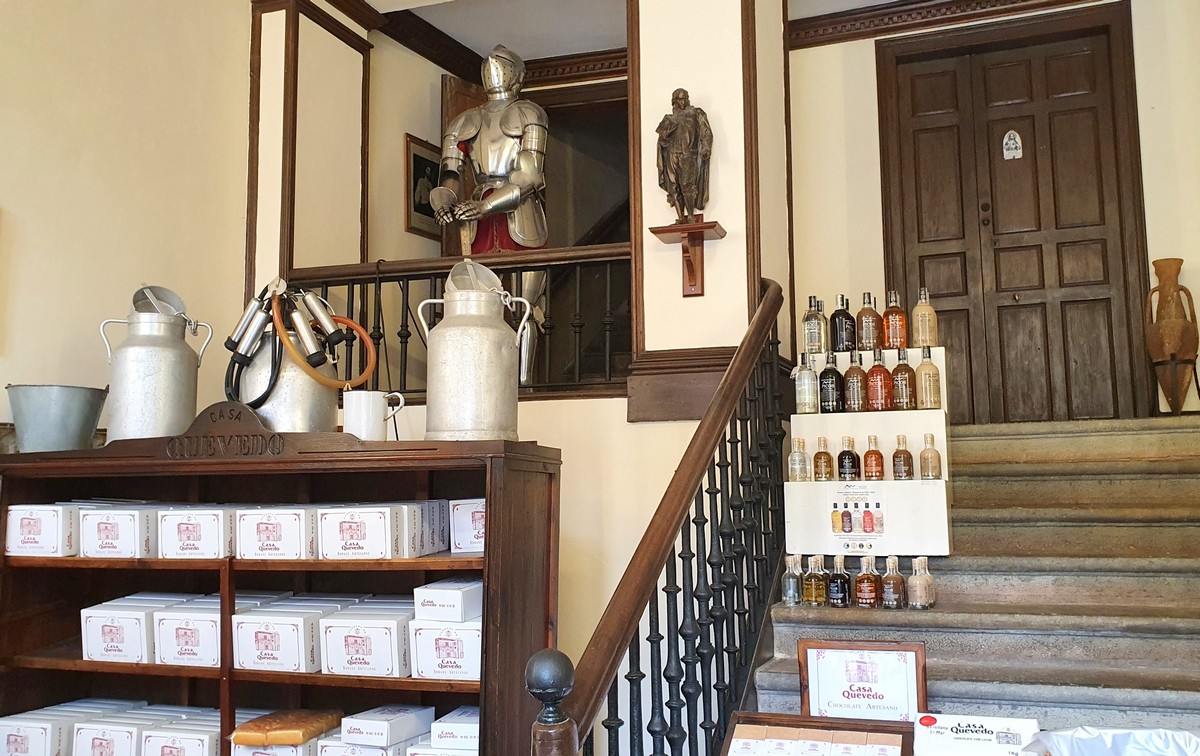 During the walk, a huge building with a square tower appeared at the end of the street. The builders were looking for a flat place for the construction of the church, but they did not know that it was also shallow, so some years later, the tower started to lean a bit. 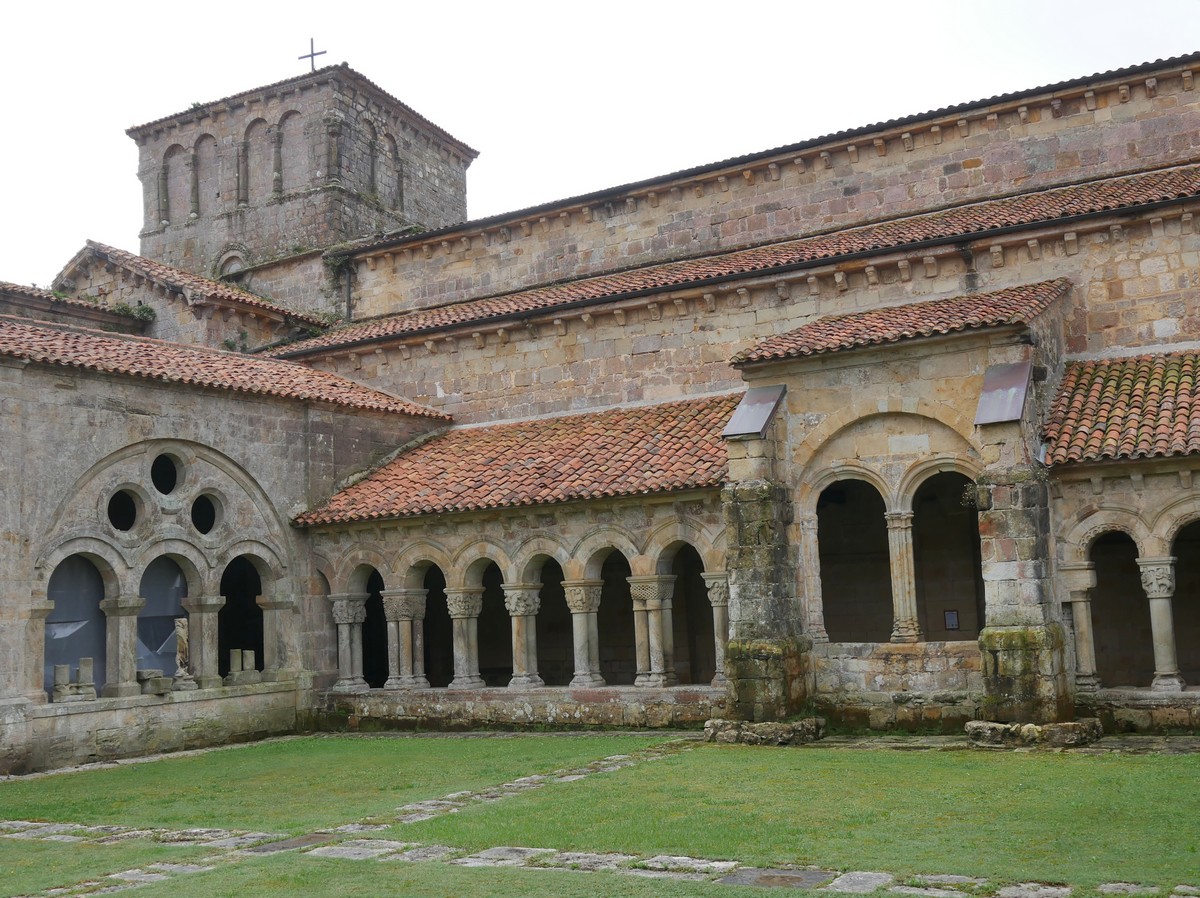 The tower is part of the Collegiate Church of St. Juliana, which is one of the most important Romanesque sacral buildings in Cantabria. In the 8th century, a group of monks settled in this then uninhabited area and built a small simple hermitage, where they took care of the relics of St. Juliana. This saint was born in Nicomedia (now Turkey). As a child, she was engaged to Eleusius, one of the emperor’s advisers. However, she secretly accepted baptism, did not want to marry the pagan Eleusius and even in front of her father she refused to renounce her faith, for which she was tortured and beheaded.

The Kingdom of Asturias supported the repopulation of the area and contributed to the establishment of a monastery headed by an abbot. Thanks to several royal privileges and donations, houses began to be built around the monastery, thus creating a town that took its name from the aforementioned saint – Santa Juliana – Santillana.

The construction of the church began in the 12th century. Already then, pilgrims stopped here on their way to Santiago de Compostela to worship the holy relics. Today, Santillana is one of the stops on the northern route of the Way of St. James (Camino del Norte), so even here, you will find yellow signs pointing to Santiago. 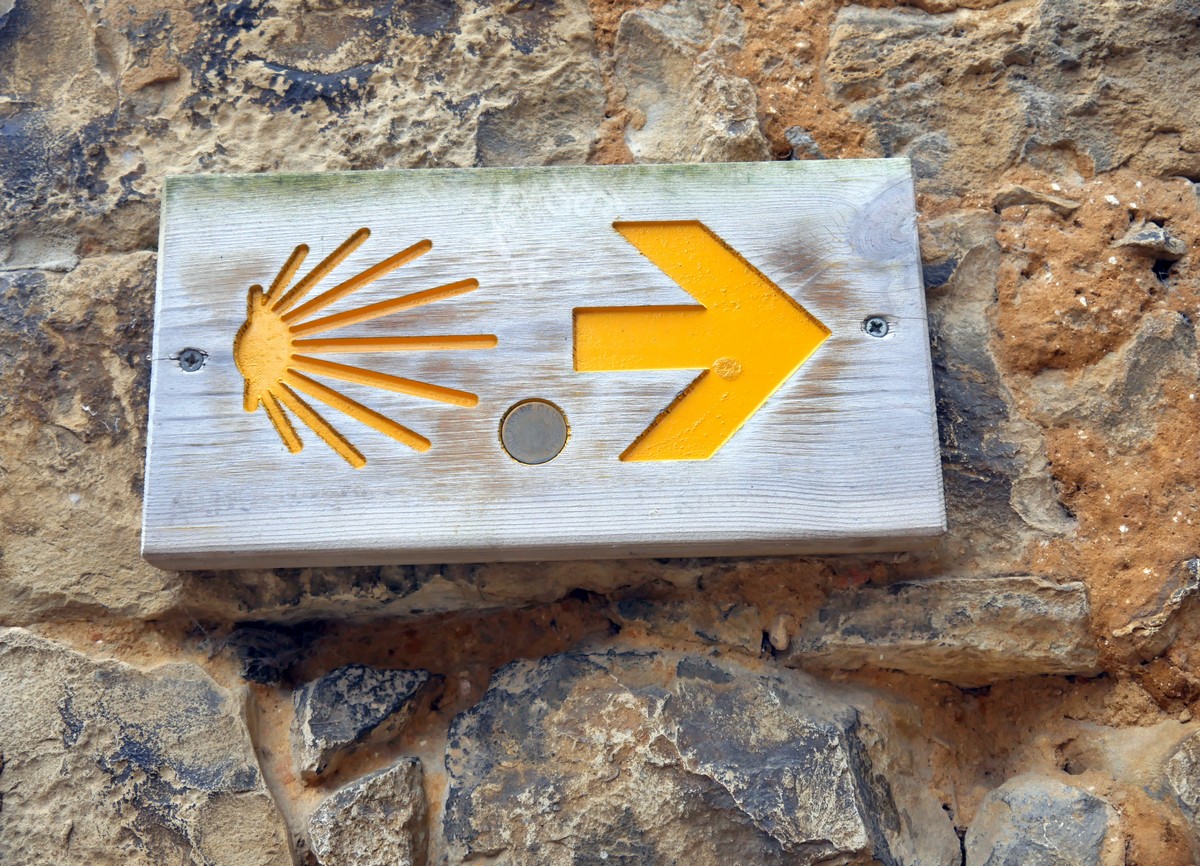 The front of the church opens onto a wide terrace, bordered by a low stone wall. There is also an iron net, which prevents the cows that had walked here in the past from entering. It is guarded by two lions, already in a rather dilapidated state. Remains of the figures of saints or apostles can be seen on the portal and above the entrance in the niche, there is St. Juliana with a palm of martyrdom in one hand, while in the other she holds a winged devil on a chain. 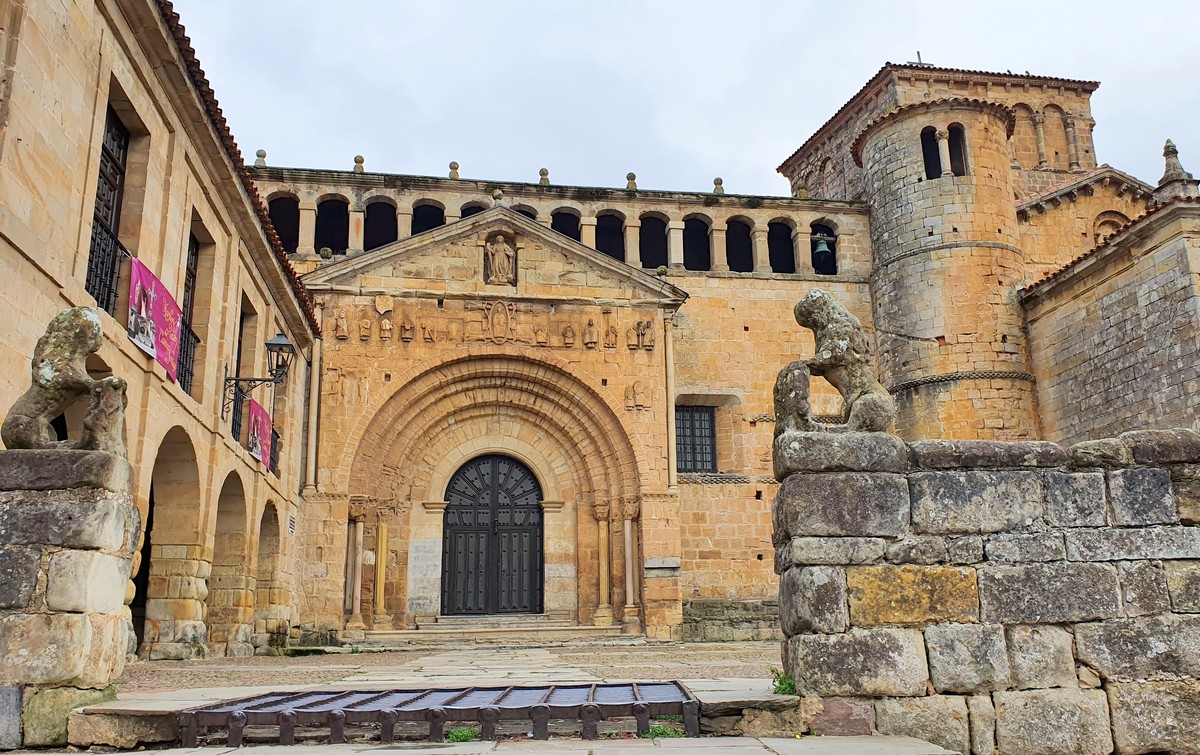 Inside the church, I was fascinated by the main altar and the Baroque organ from 1719. 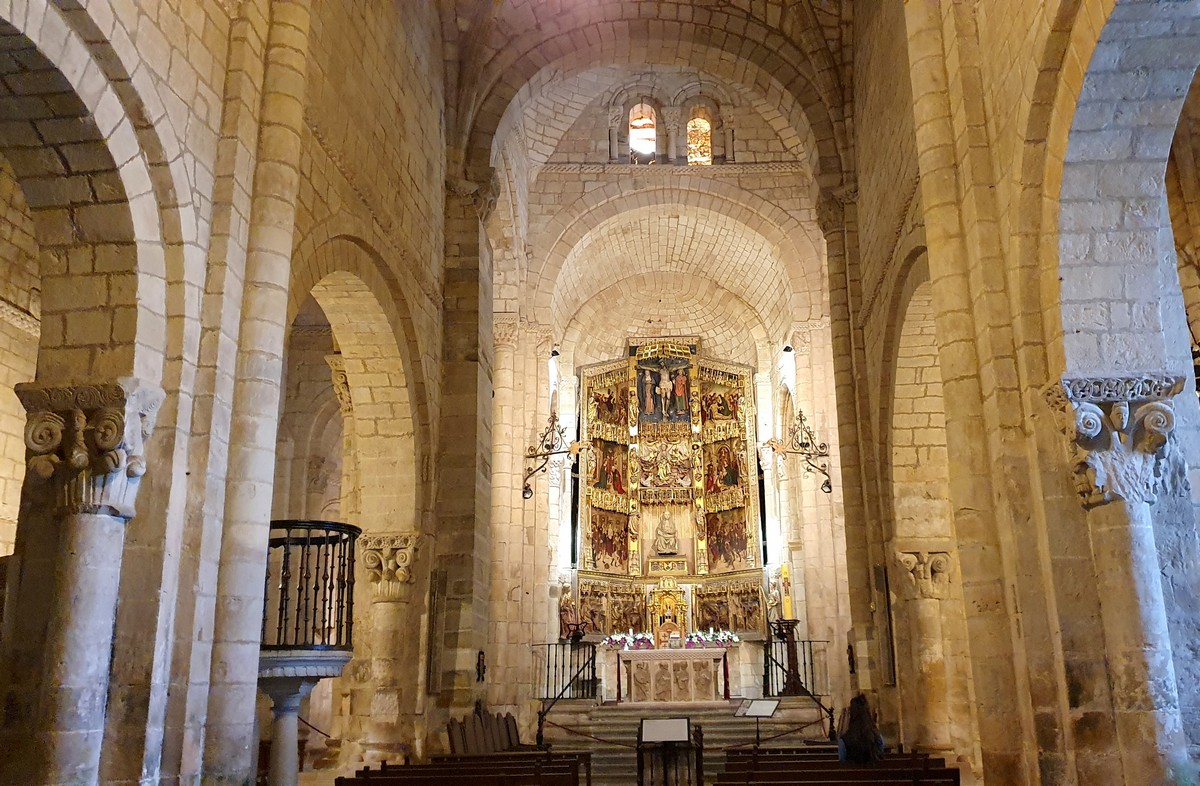 However, the most interesting part for me was the Cloister. The columns have interesting capitals. Some are decorated with geometric or plant motifs, very densely intertwined. Nevertheless, most remarkable are the capitals which depict various biblical stories, the eternal struggle between good and evil, the need for repentance and forgiveness.

If you decide to spend more time in Santillana, you can also visit:

Museum of Torture – a collection of tools for torture and the death penalty from various parts of Europe from the 15th – 19th centuries. By the way, according to legend, St. Juliana was not only flogged, but the despised fiancé allegedly burned her face with a glowing piece of iron, saying mockingly, “Now go and look at your beauty in the mirror!” Juliana replied, “At the resurrection, there will be no burns or wounds, only the soul.” More info about the museum: Museo de la Tortura 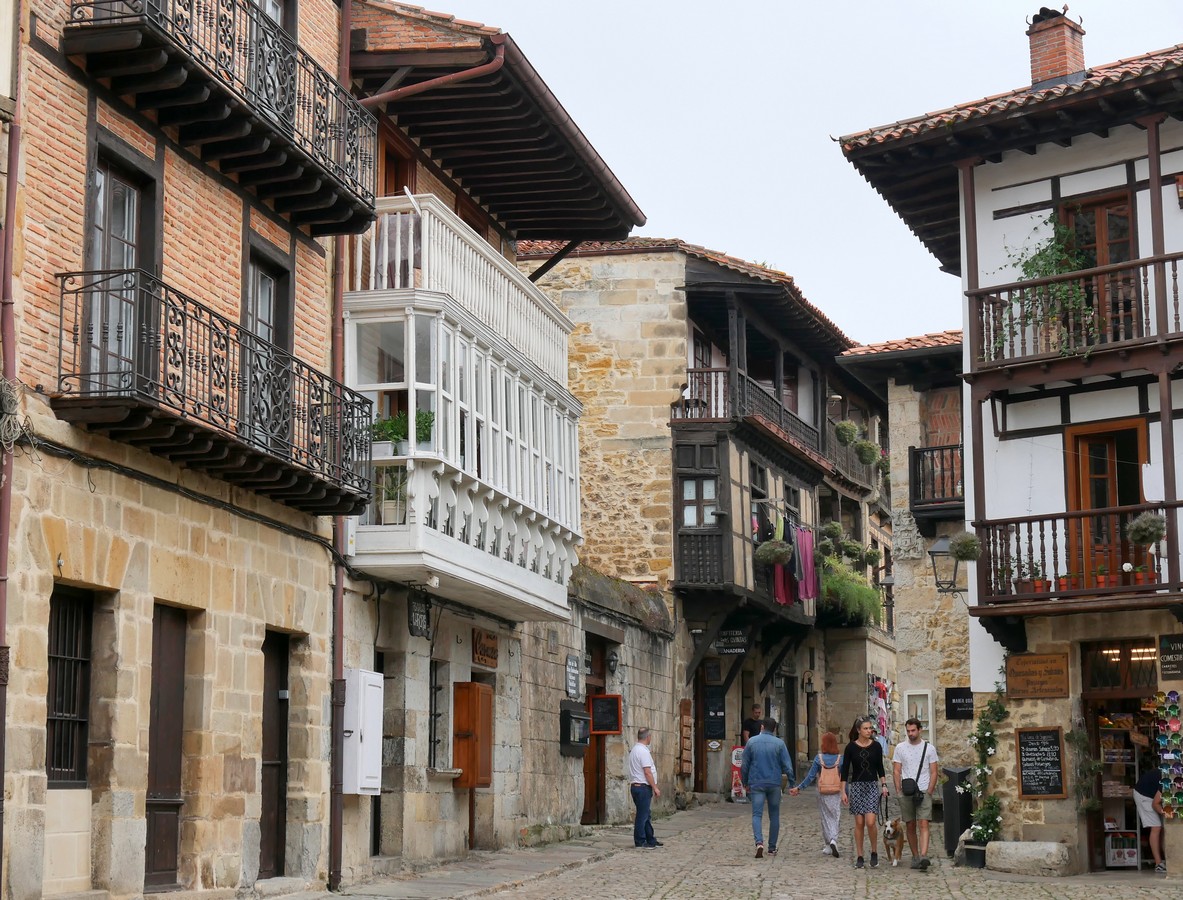 Jesus Otero Museum – dedicated to the sculptor who was born in Santillana. More info: here 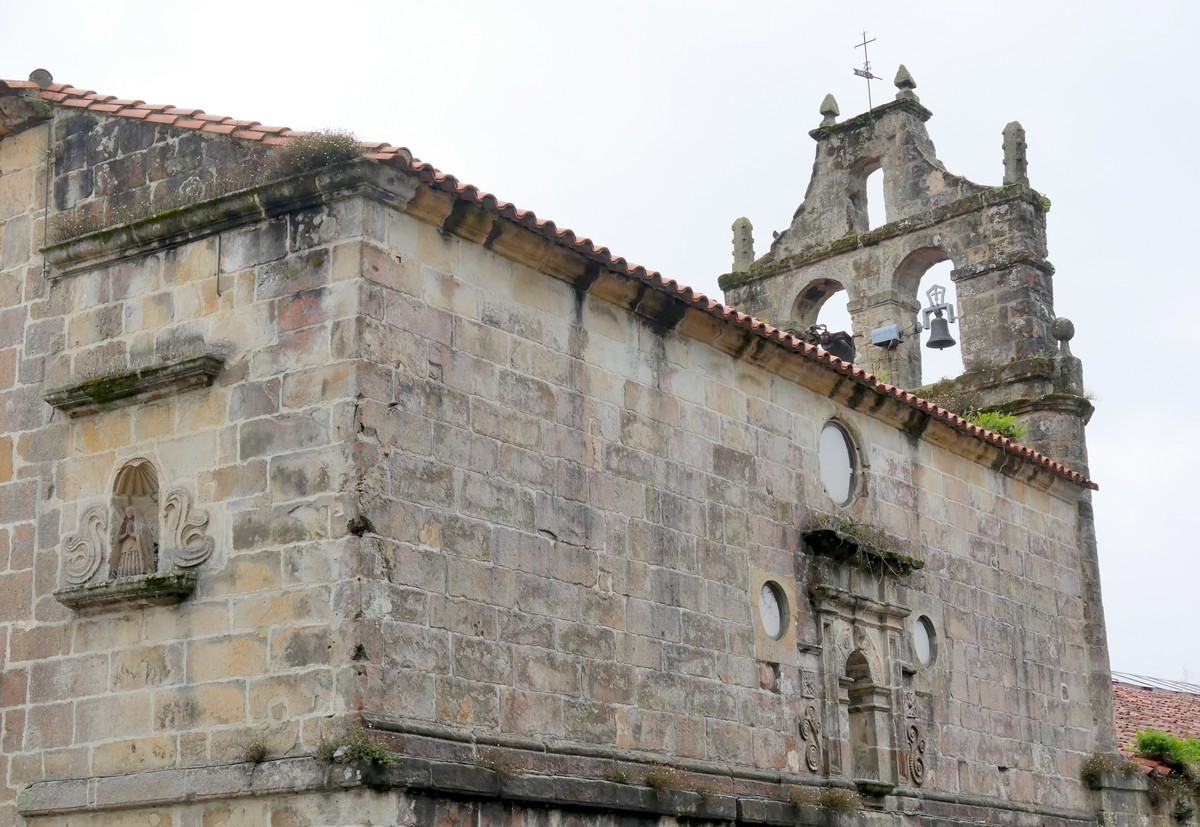 Next to the museum, there is the Convent of the Poor Clares, one of the four closed monasteries in Cantabria. According to tradition, brides bring a dozen eggs here with a request that the nuns pray for nice weather without rain on the day of their wedding. I finally know the reason why it was raining all day at mine!

Just 2 km south of Santillana, there is the Altamira Cave – the “Sistine Chapel of the Paleolithic”, which is definitely a must-visit, even if only its faithful replica is accessible. You can read more in my article: Altamira 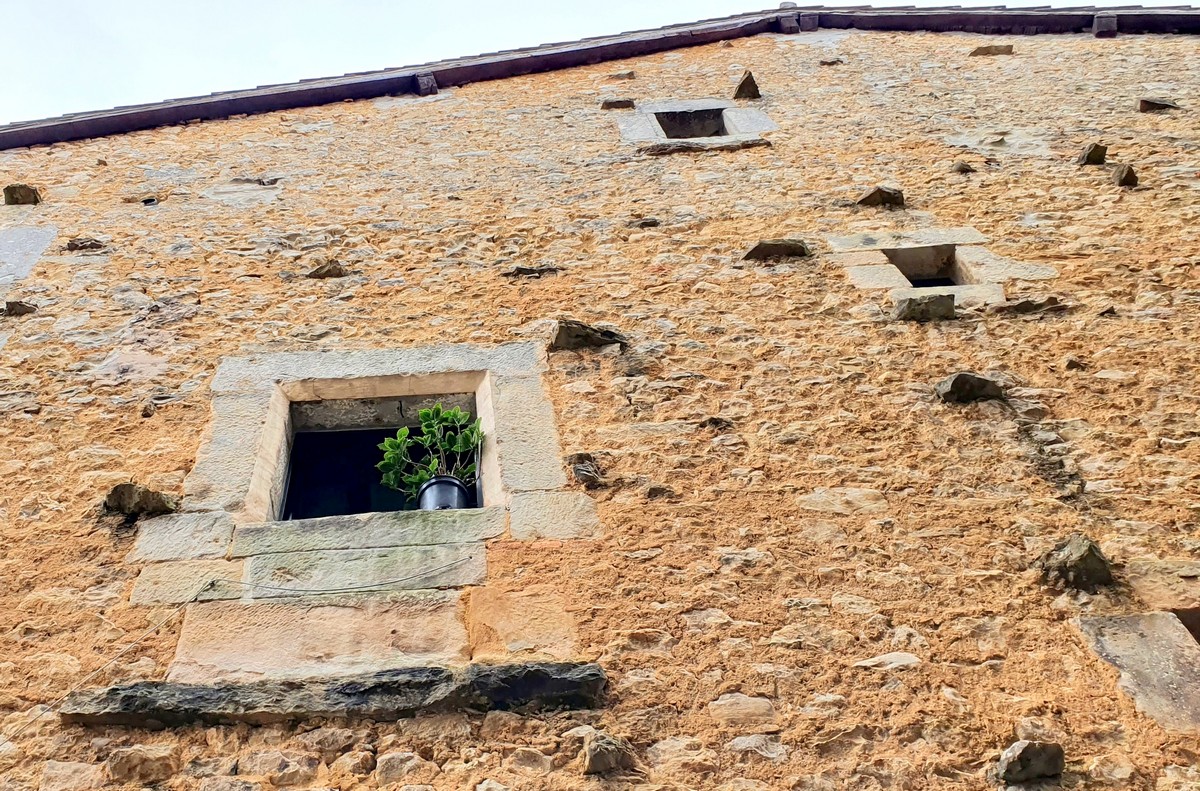 More information about Cantabria can be found at: TURESPANA and Fundación Camino Lebaniego

9 Tips for Your Perfect Day in Santander 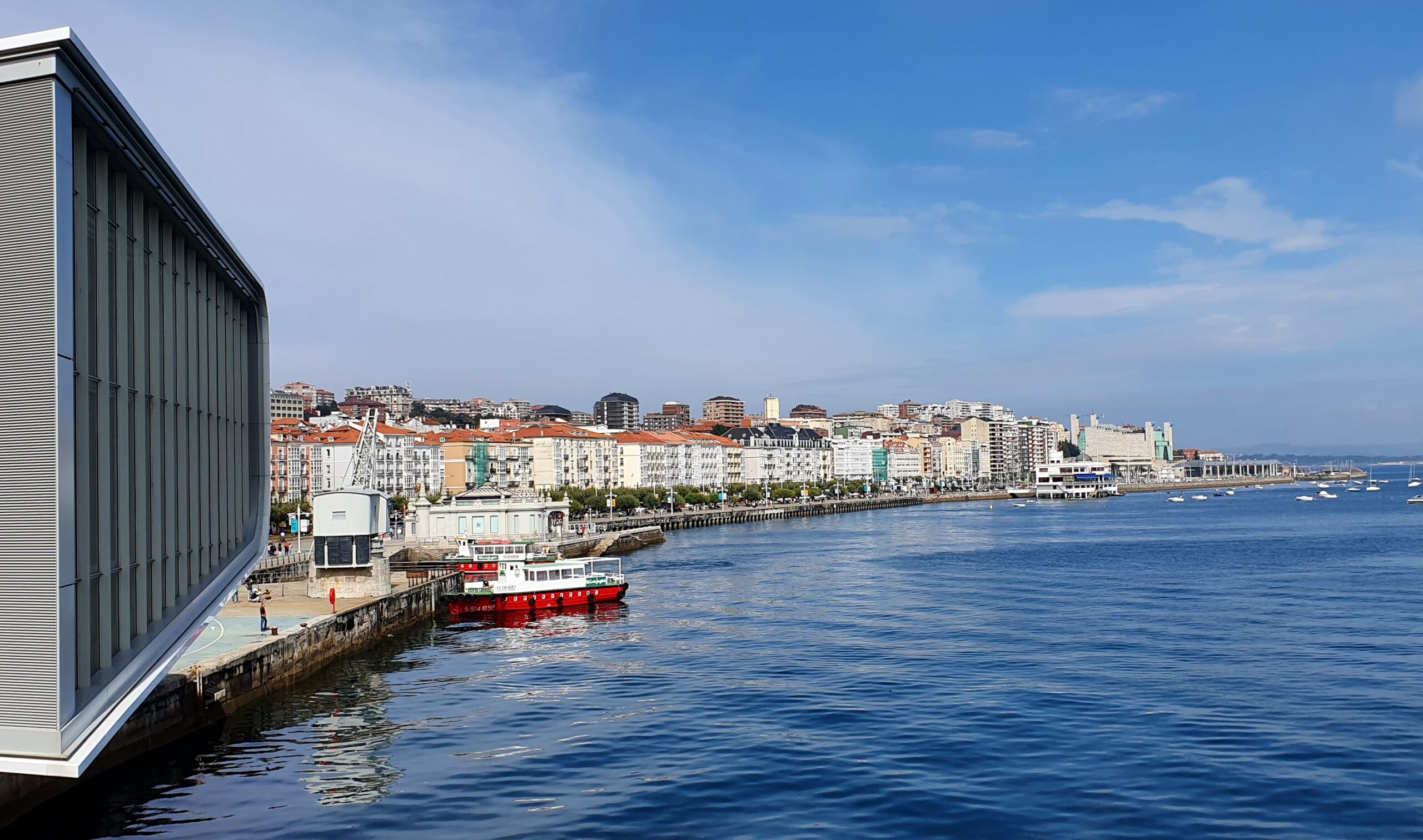 9 Tips for Your Perfect Day in Santander 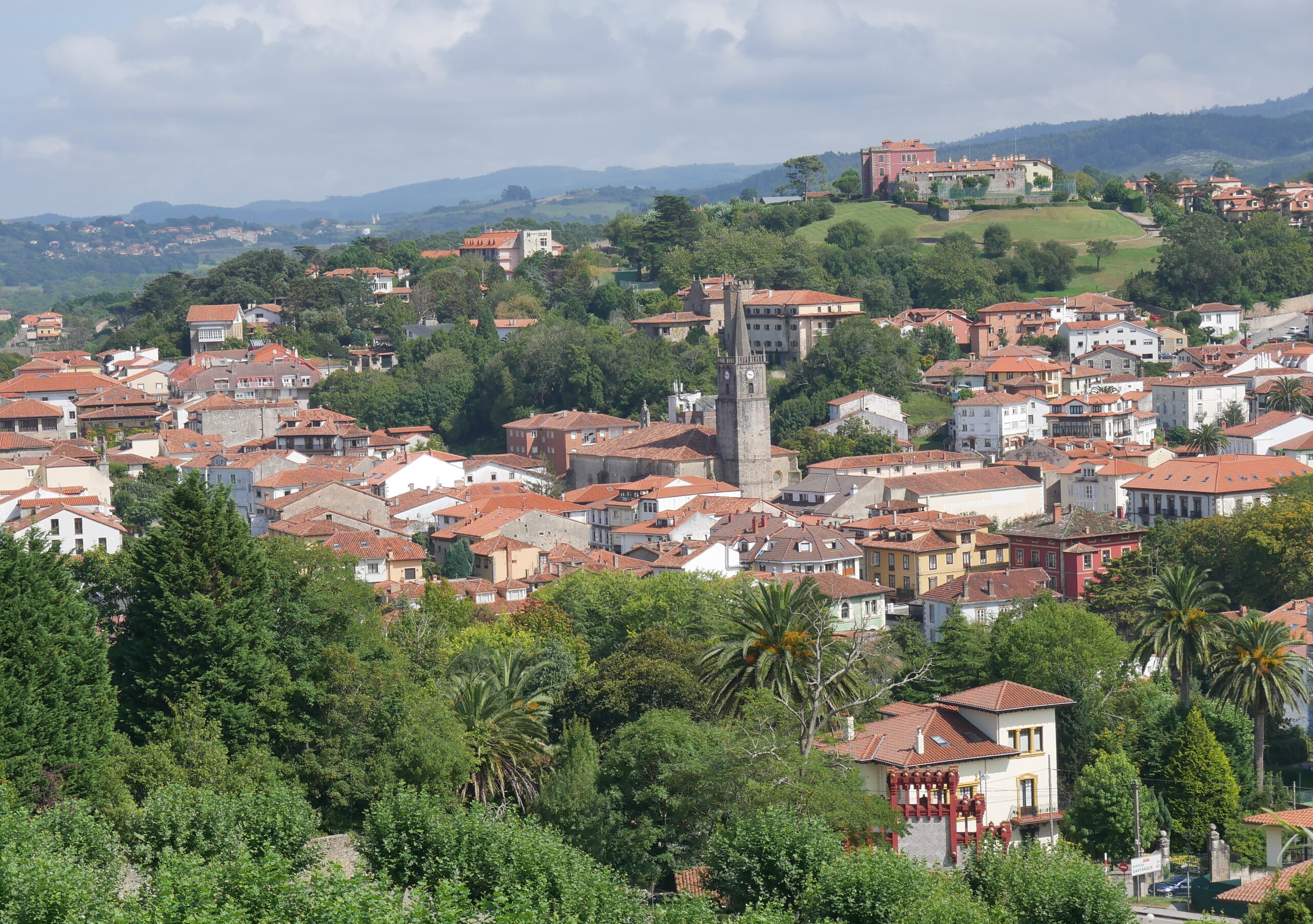