by Ingrid
in EVENTS
0

While preparing my article about Slovak Easter Eggs where I also mentioned the batik technique I received an interesting invitation for a workshop organized by the Embassy of Indonesia and the University of Applied Art in Vienna. It was a batik workshop!

It is a very old technique – used in Ancient Egypt, Turkey, India, China, Japan or West Africa – but we cannot track down the precise origin of batik. But none of those countries developed batik to its present art form as on the island of Java in Indonesia. Even the word batik is thought to be derived from the Javanese word „ambatik“ ( meaning a cloth with little dots) or „tritik“ which actually describes the process for dyeing. 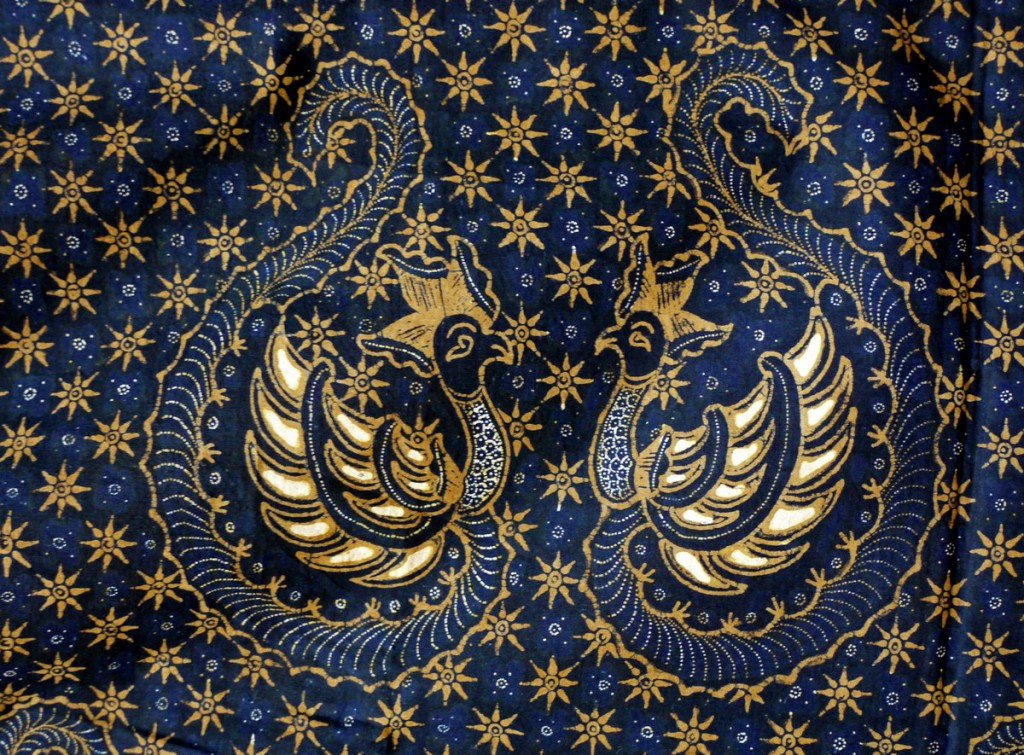 For people in Indonesia batik is a part of their life. They are dressed in batik clothes whether they are sad or happy, young or old. Batik accompanies them at their birth, at the initiation (the first menstruation), at the wedding (the used patterns show what the new couple is wishing for their marriage) and also at the death. In 2009 the Indonesian batik was inscribed on the UNESCO’s list of the Intangible Cultural Heritage. 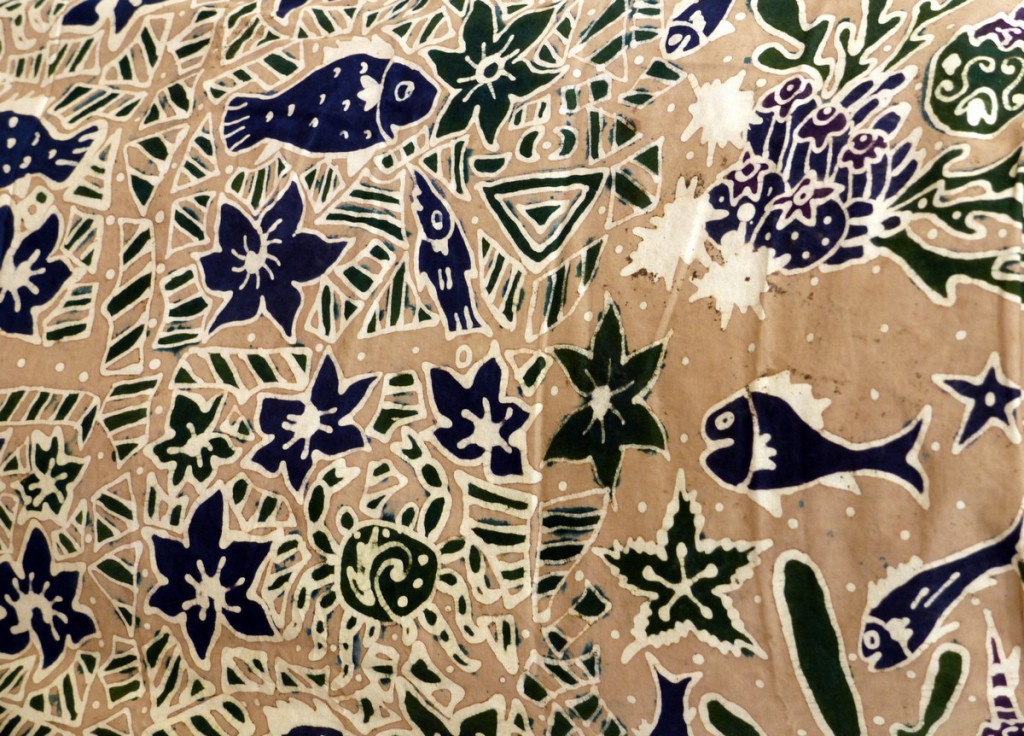 At the beginning of the workshop we were shown different designs. There are thousands of traditional patterns, some of them are associated with specific religious ceremonies. Some were reserved for the Sultan, his family or their attendants only (parang, kawung). Traditional batik designs utilize patterns handed down over generations. We could choose from several designs. 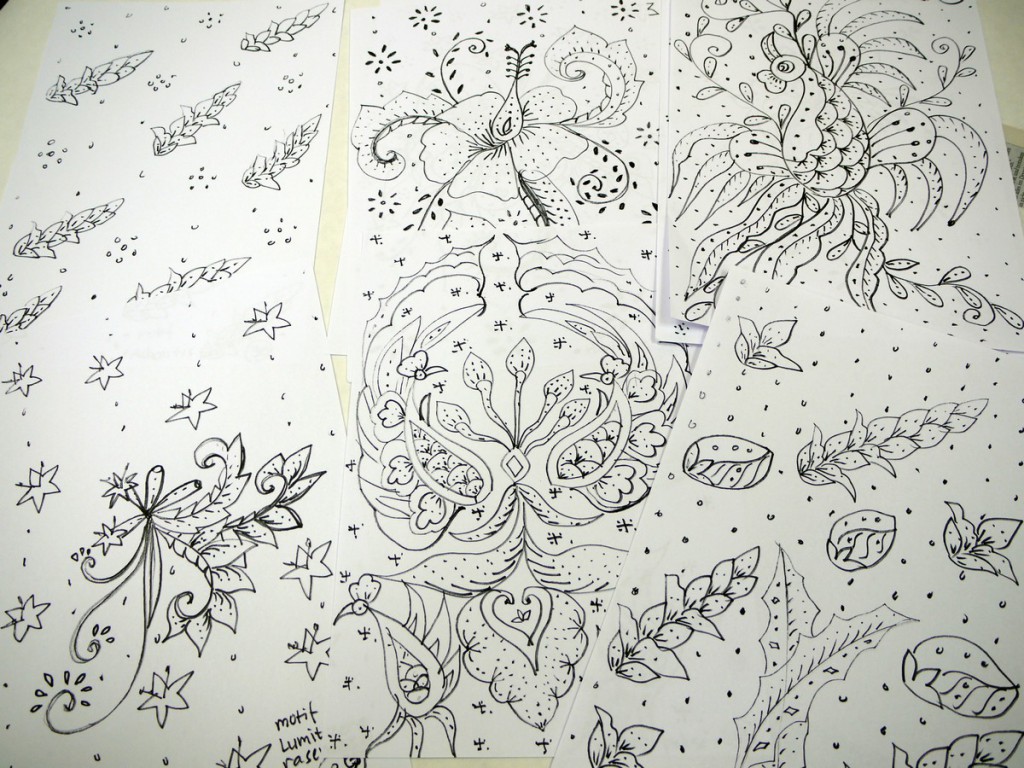 First we had to outline the chosen pattern with a pencil on the cloth. 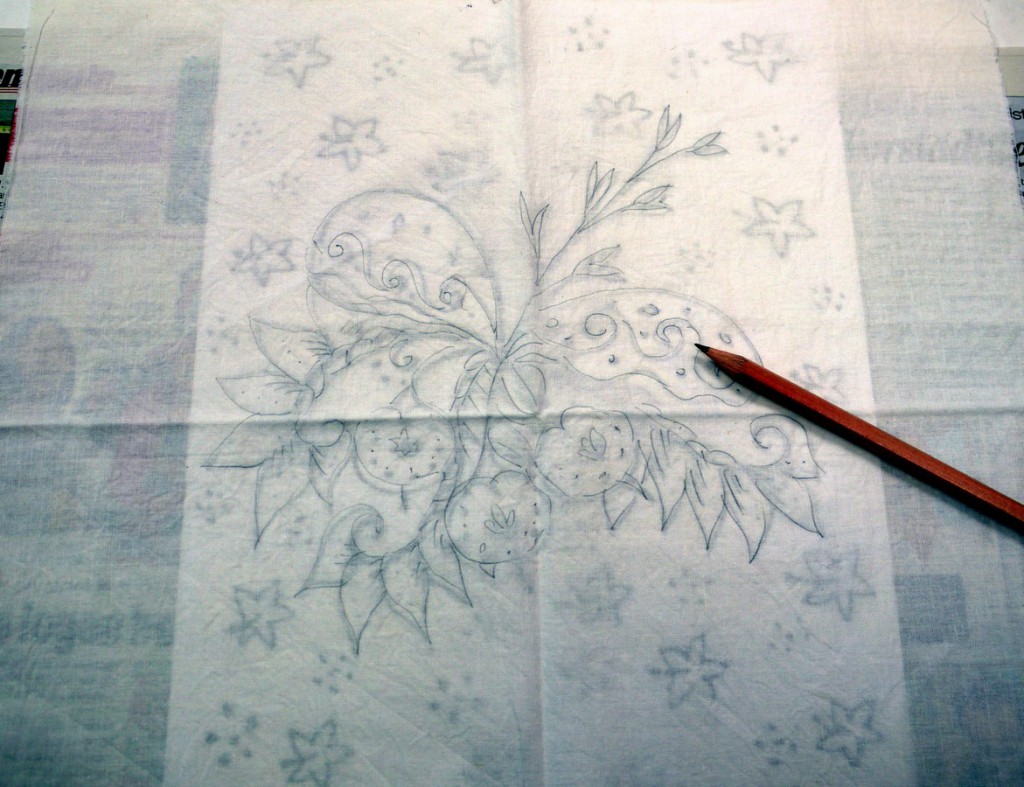 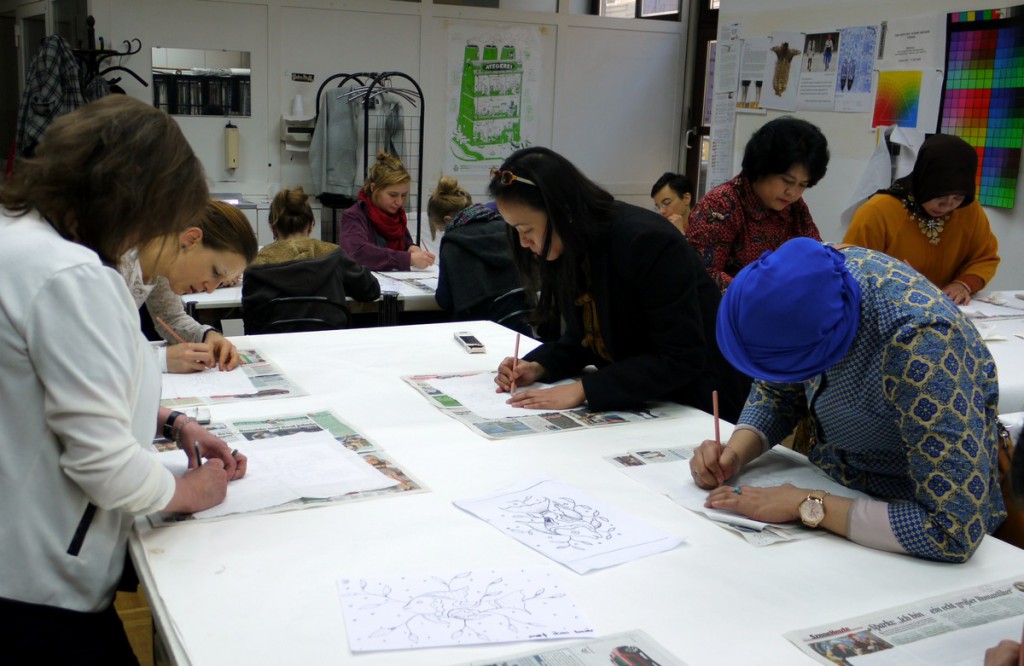 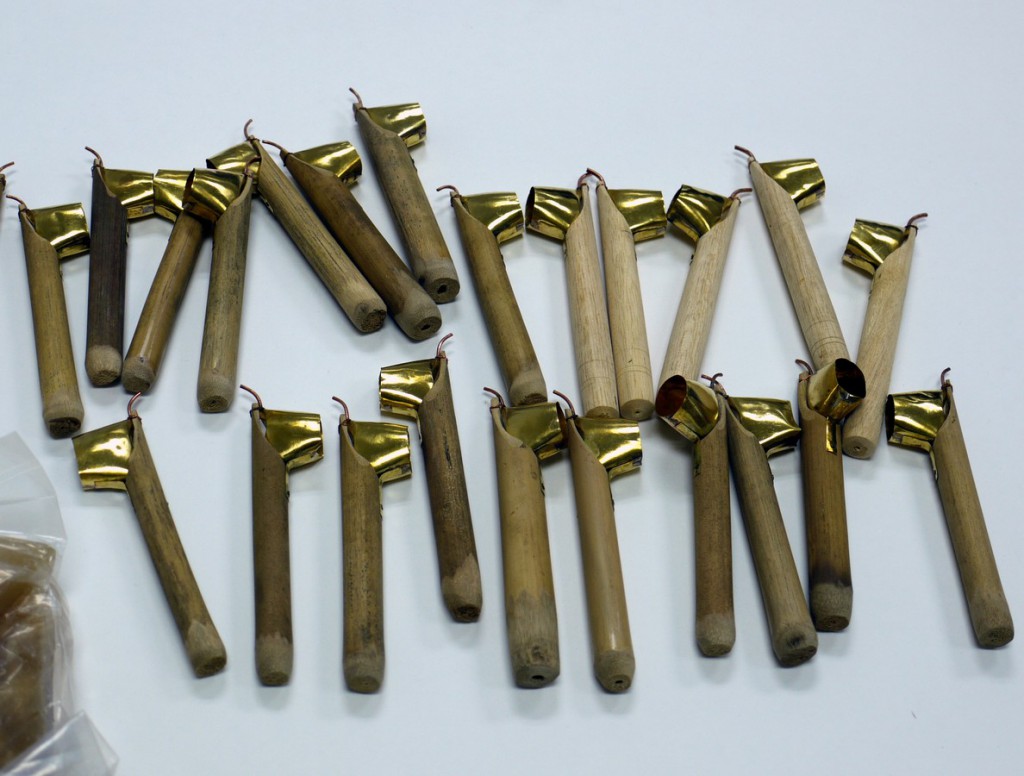 The tools used for batik are very simple. The canting, believed to be a purely Javanese invention, is a small copper container with a small thin spout connected to a short bamboo handle. The container is filled with melted wax. 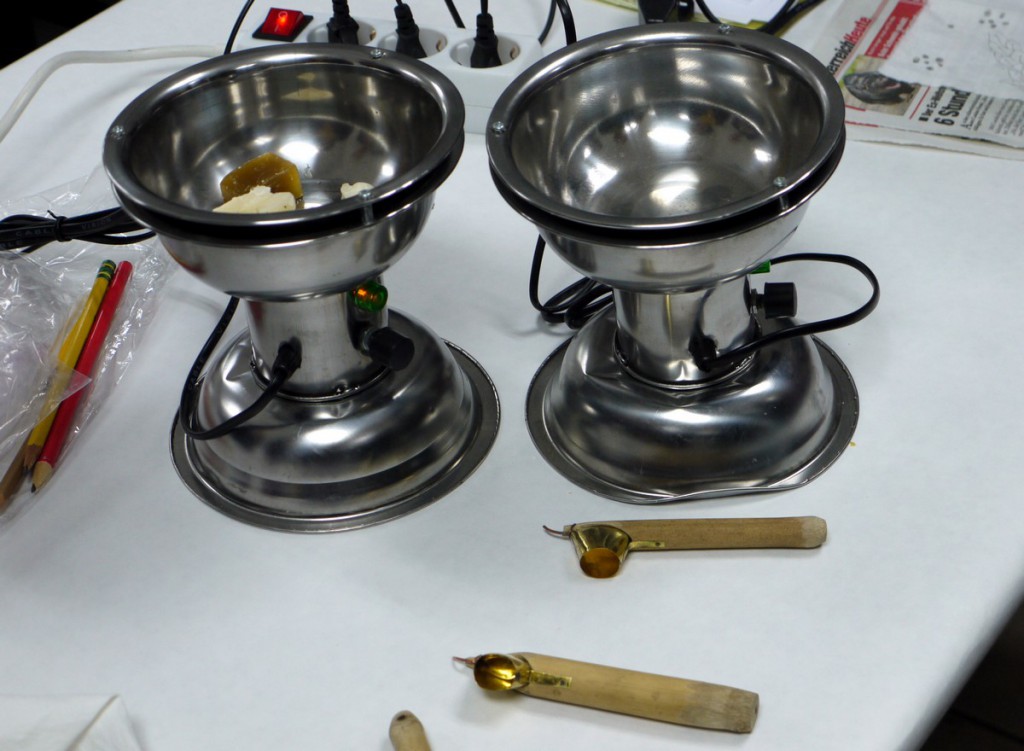 Wajan is a special container for melting wax. Different kinds and qualities of wax are used in batik. Mostly it is a mixture of beeswax and paraffin, resins can be added. Although it takes time you have to wait until the wax is completely liquid. Then you have to dip the canting into the wax, fill the bowl of the canting and draw the pattern as this lady does. 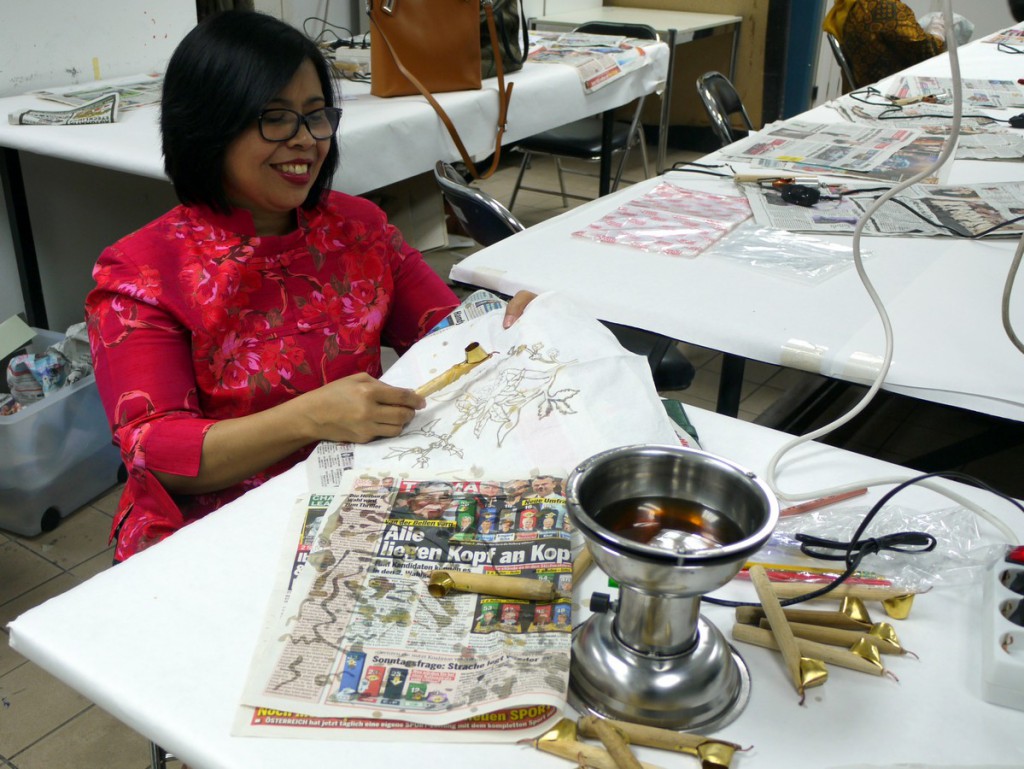 Lulut Sri Yuliani, the lady who taught us batik, brought also electric wax-pens! It was easier to work with such a pen but from time to time the wax was too liquid and drawing got a little bit out of control. 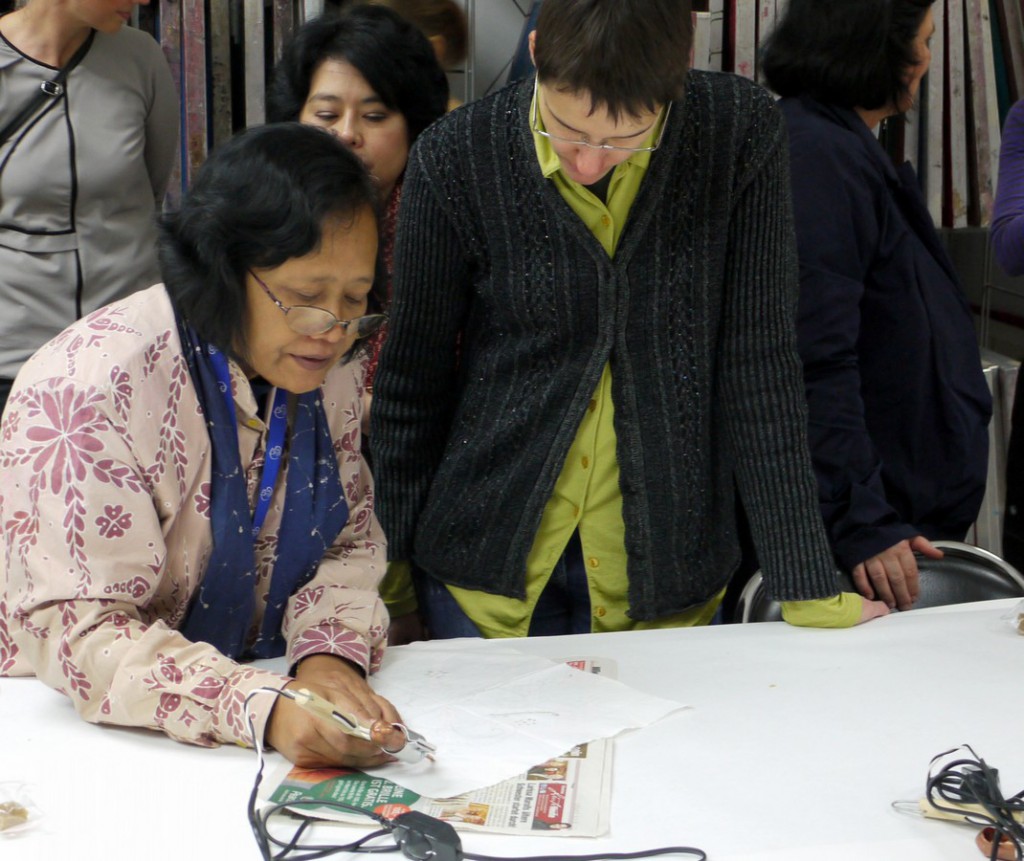 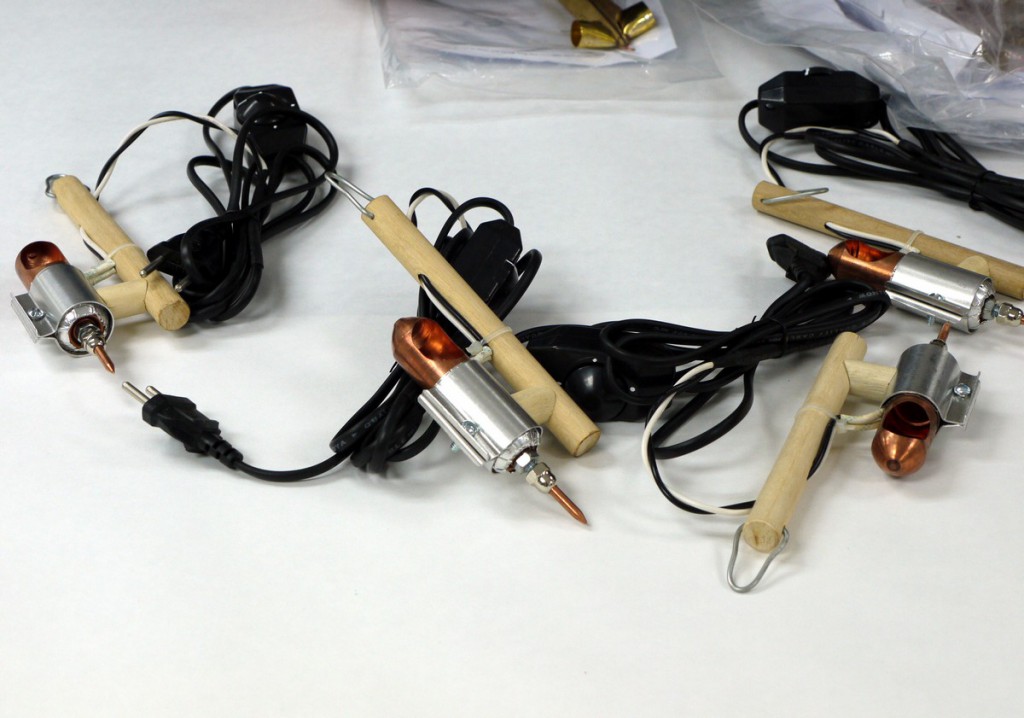 Anyway, we tried our best and patiently drew all lines of the sketched picture with wax. 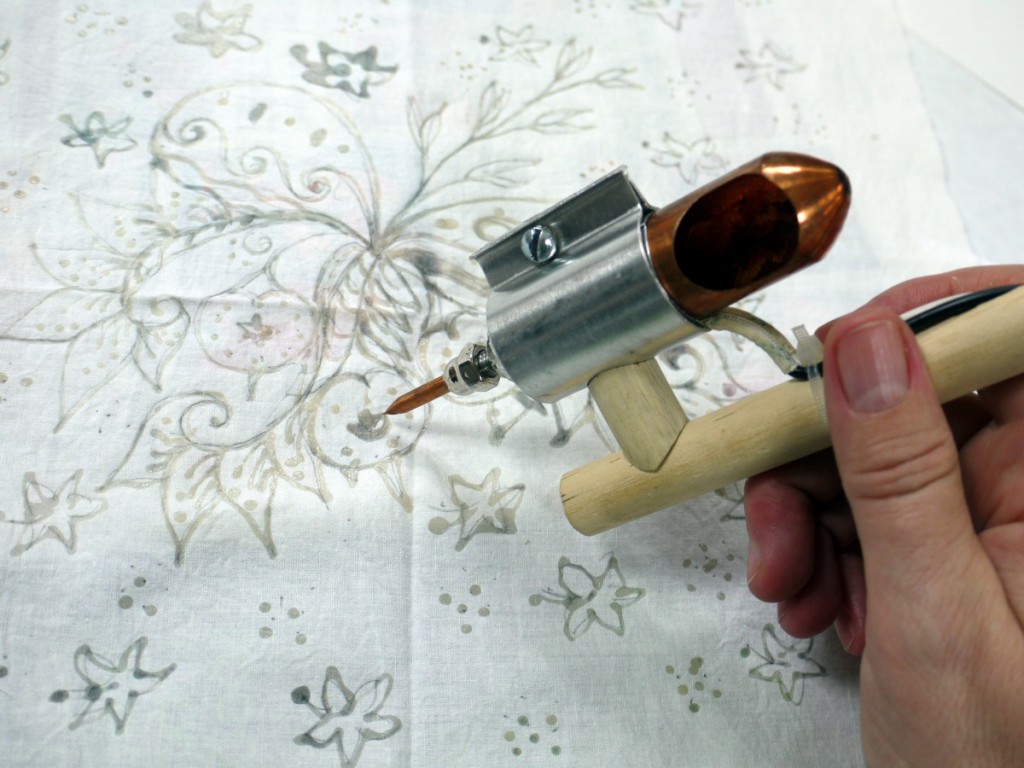 When the picture was finished we soaked the fabric with provided colours. The principle of batik actually is that selected areas of the cloths are blocked out by drawing hot wax over them, the cloth is then dyed – the parts covered in wax resist the dye and remain the original colour. I chose the violet colour.

Drying took long time, we tried to use hairdryers. Because it took so much time I decided not to draw any other patterns, I just removed the wax and the violet picture was finished.

We were also shown very large pieces of batik fabrics and the Indonesian ladies explained us how to wear them. Using one or two such pieces they skillfully tied trousers from them, a skirt or different types of dresses – fastened on one shoulder or passed around the waist and tied on the back etc. Well, you could see at first glance which ladies in our group came from Indonesia – all of them were wearing a batik jacket.

After we had finished the workshop we were invited to the lunch. 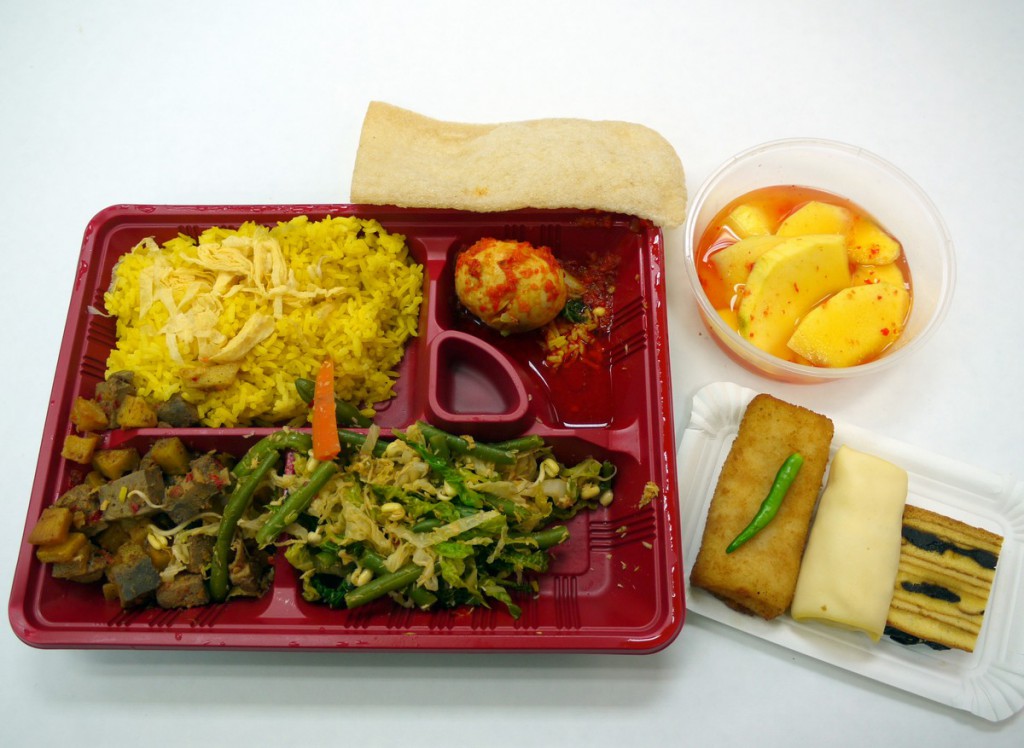 First there was some Indonesian finger food, a small green chilli pepper was smiling at me on one of them. I like spicy dishes but it was really hot! Anyway, I managed to eat it. Then we received a plate with yellow rice, beef liver, green salad and a cooked egg with red sauce. The egg was even hotter than the chilli but because there were the other things it was not so difficult to eat it. I like mango so I was looking forward to the compote which was served as dessert. Although there was some suspicious red powder on it I risked eating it. After all, the Indonesian lady sitting next to me told me that her mother had used to prepare this compote for them in the afternoon when they came home from the school. You cannot imagine how hot the mango was! I have never eaten anything more spicy! My oral cavity turned into a cave of fire. I am sure if somebody would put some wax into my mouth it would melt immediately and we could continue our workshop! 🙂

Brussels – 9 Art Nouveau Buildings that are Worth Seeing, Even if Only from the Outside
Tags: artbatikfabricIndonesian batikUNESCOworkshop
Previous Post 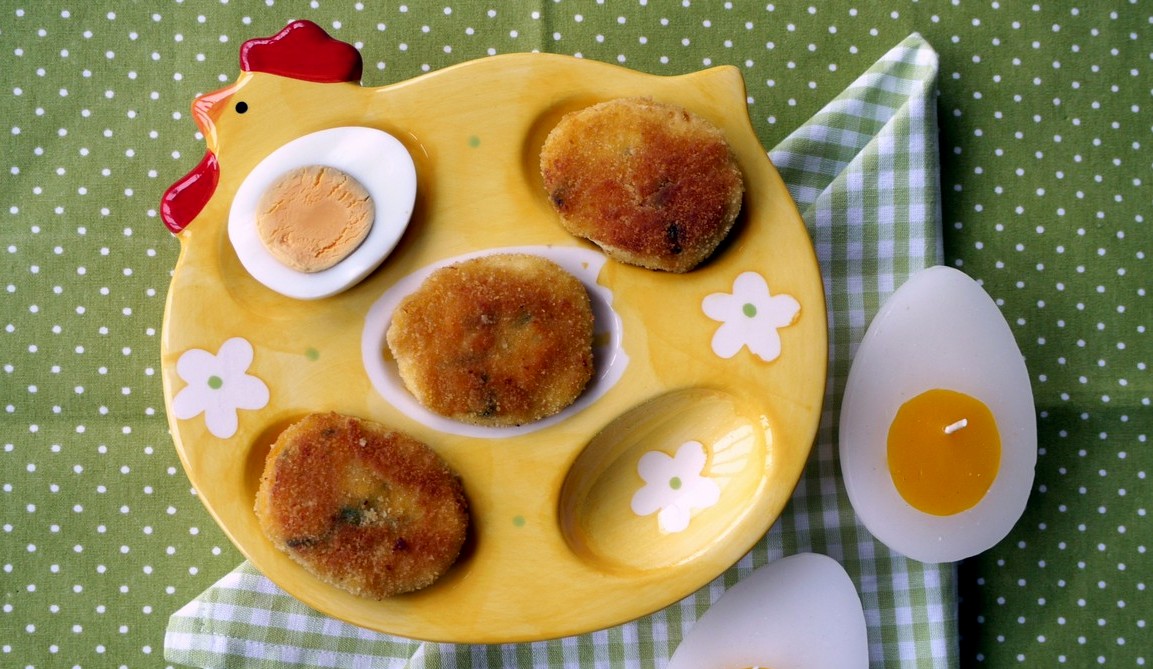 About the Spring
Fried Eggs 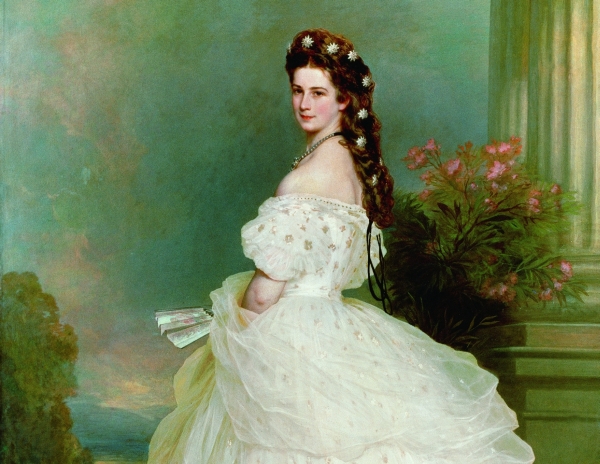 Sisi's Stars – The Famous Jewel of the Famous Empress