Christmas was approaching. At the city market, carp were trembling in a big tub. Similar to other families in Czechoslovakia at that time, we too could not imagine Christmas without carp…

In the past, a strict fast was observed during the Advent period – the meat was not allowed, but you could eat fish. The fish is an important Christian symbol, already for the first Christians, it was a sign to identify themselves. Since the most economically important European fish is the carp, which has been artificially bred for more than 2000 years, this fish has also found its place on the Christmas Eve dinner table. 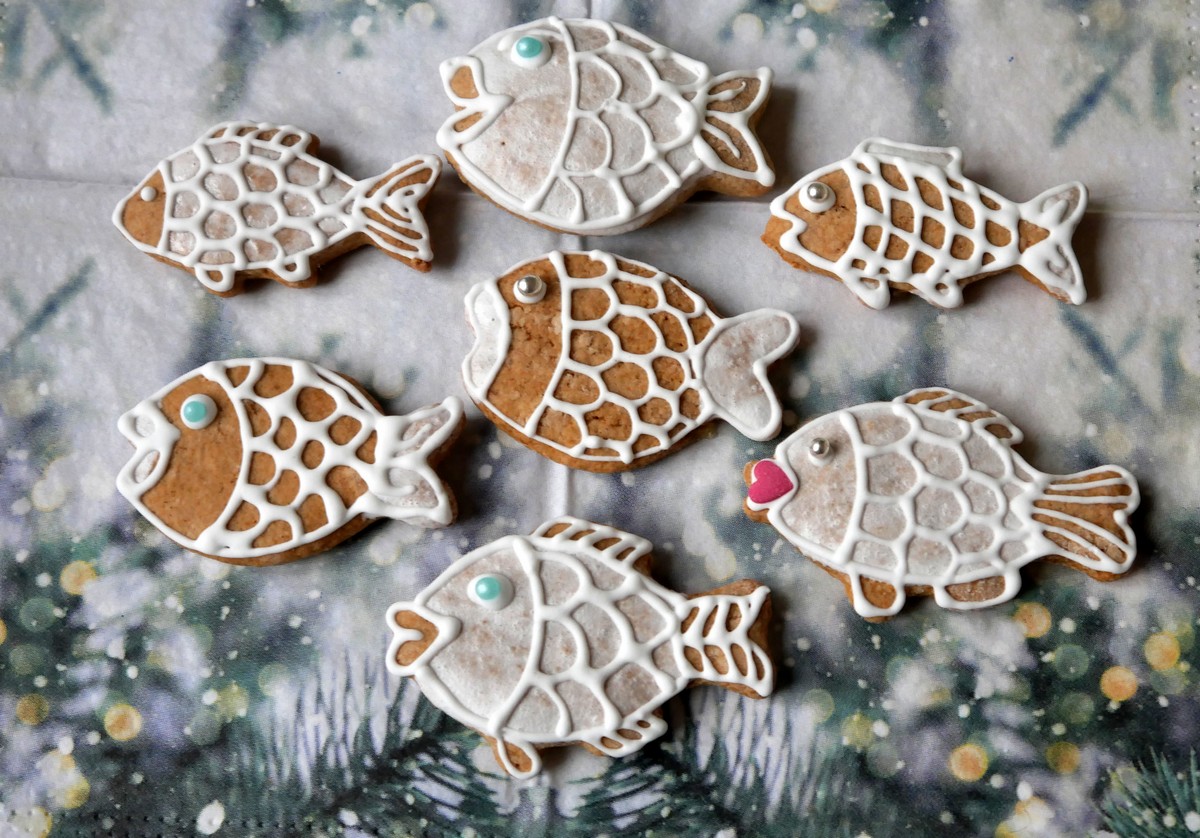 Our mother used to bring a live carp from the market. That’s how it was done then. We filled the bathtub with water and threw the carp into it. So we adopted a new family member for a few days – it was actually the only pet I had as a child. And what about that we couldn’t use the bathtub? That didn’t matter, because at that time we only bathed once a week anyway. Instead, we went to the bathroom to watch the carp swim from one edge of the bathtub to the other, glaring at us with its carp eyes and charmingly opening its small mouth. Sometimes a strange sound came from the bathroom (we had to leave the door open so that the carp could get air) when the carp (from joy?) splashed in the water.

When newspapers, a rag, a meat mallet and a knife appeared in the kitchen the day before Christmas, it was clear that the carp would not live to see the next morning. I heard that some families felt sorry for the carp, they would become fond of it and couldn’t kill it, so they would decide to throw it in a river or lake instead. I personally did not know any such family. It is said that the carp will not survive such a re-shock. That’s why I’m rather of the opinion that it’s actually a privilege for the carp if it can end up on the festive Christmas Eve dinner table around which the whole family gathers, enjoying the special charm of Christmas and the festive tasty food. 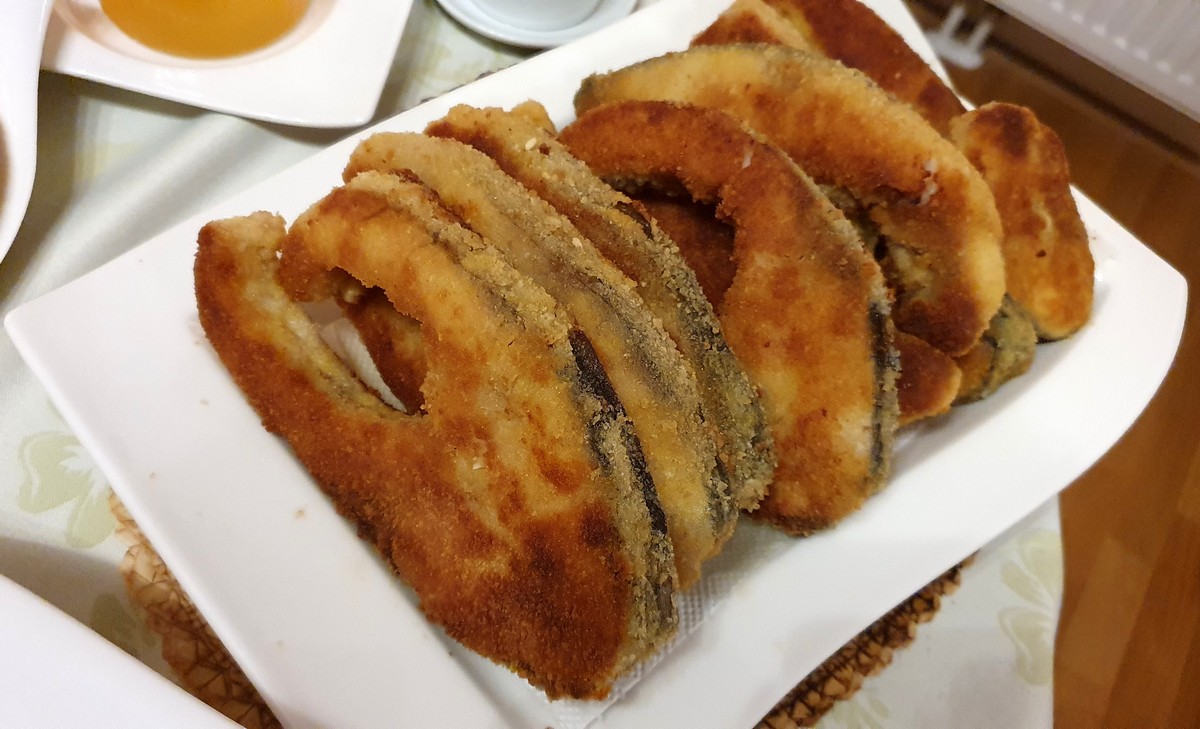 In our family, we always had sauerkraut soup for Christmas. We only used carp meat, cut in the shape of horseshoes, coated in flour, egg and breadcrumbs and then fried until golden. We used to throw the fish heads away. One day, however, our best friends offered us their traditional Christmas fish soup. Since then, we don’t throw away the heads, we even buy some additional ones, and for Christmas, we cook soup according to Dushan’s recipe:

heads and insides from 3 large carp

Clean the carp thoroughly. Separate the heads so that about 4 cm of meat remains behind the gills and remove the gills and eyes. Throw away the intestines and bile and clean the other insides. (For the main course: cut the meat into the shape of horseshoes and leave it soaked in milk for several hours to eliminate the fish smell.)

In one pan, turn glassy one finely chopped onion in the oil, add roe, salt and roast for approx. 10 minutes. If you don’t like the roes, you can leave them out of the recipe. 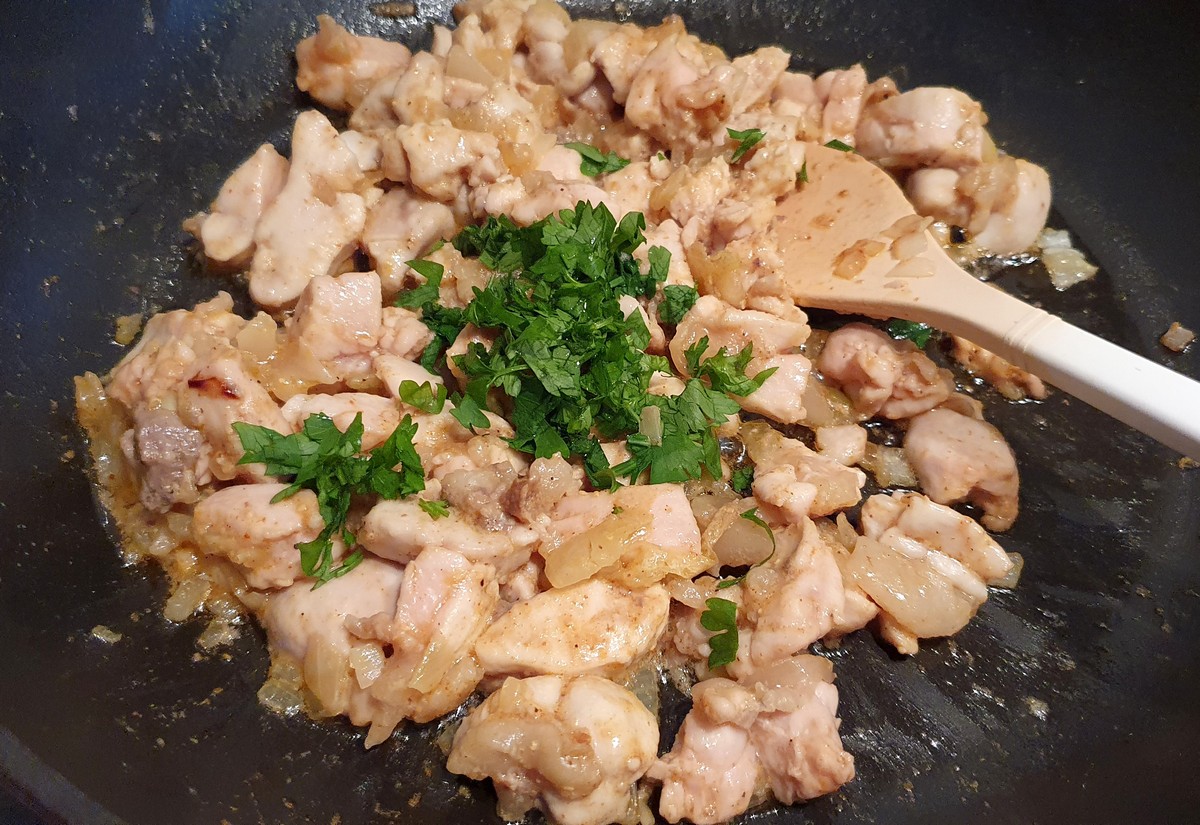 Put all the heads, one whole onion and salt in a large pot, pour 1.5 l of water and cook covered for 45-60 minutes. After the heads have cooled down, remove the bones and other hard parts from them and take out the cooked meat (you will be surprised how much meat there is and especially around the cheeks, the meat is very tasty). 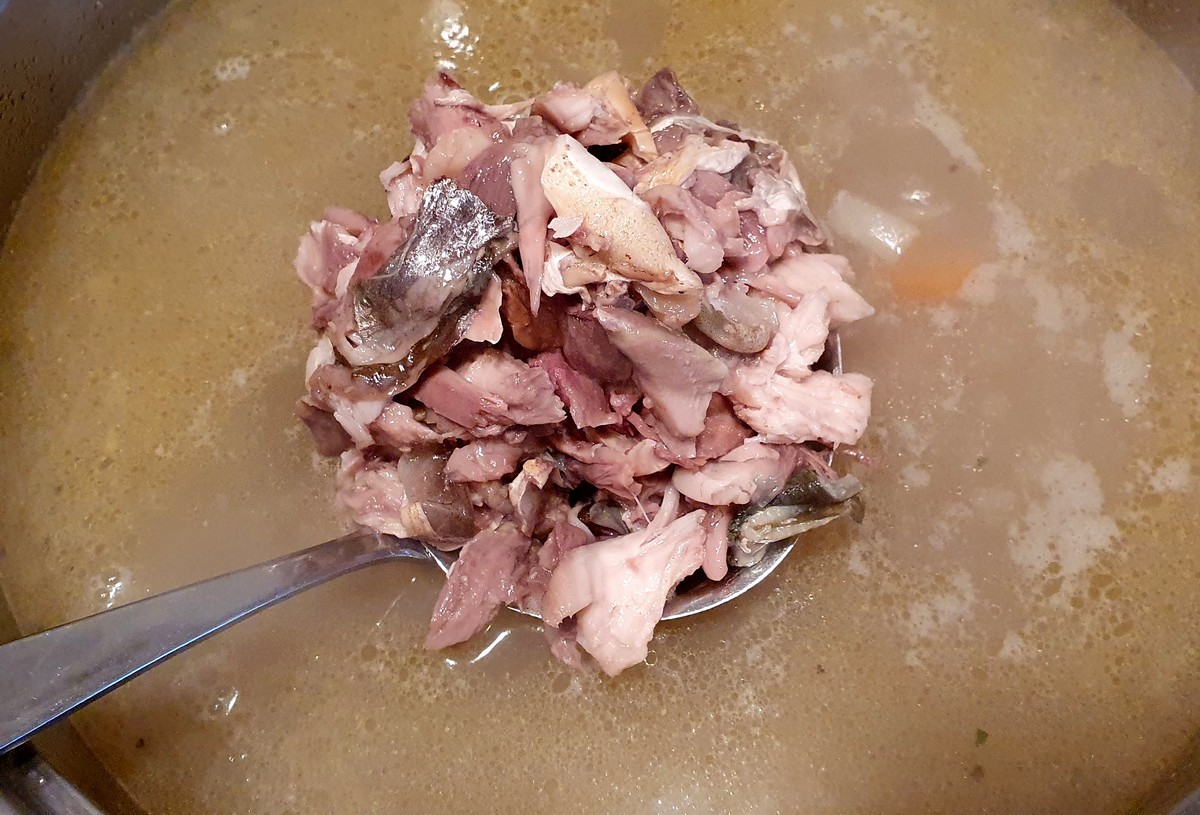 In the largest pot, let the last finely chopped onion become glazed in the oil, add all the root vegetables cut into rounds or strips, add a little water and simmer covered for 30 minutes. When the vegetables are soft, add the strained broth from the heads through a sieve, cook for a while and finally add the fried insides, roe and boiled meat from the heads to the soup. 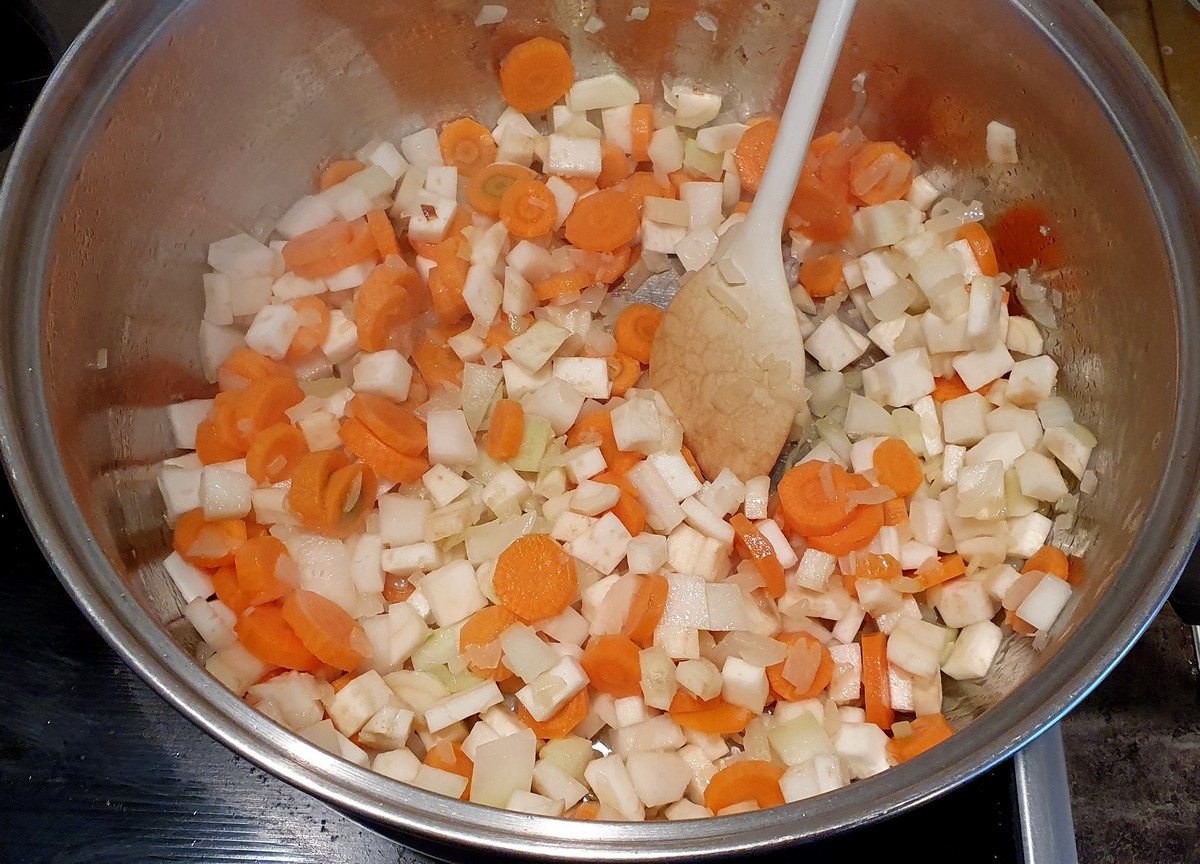 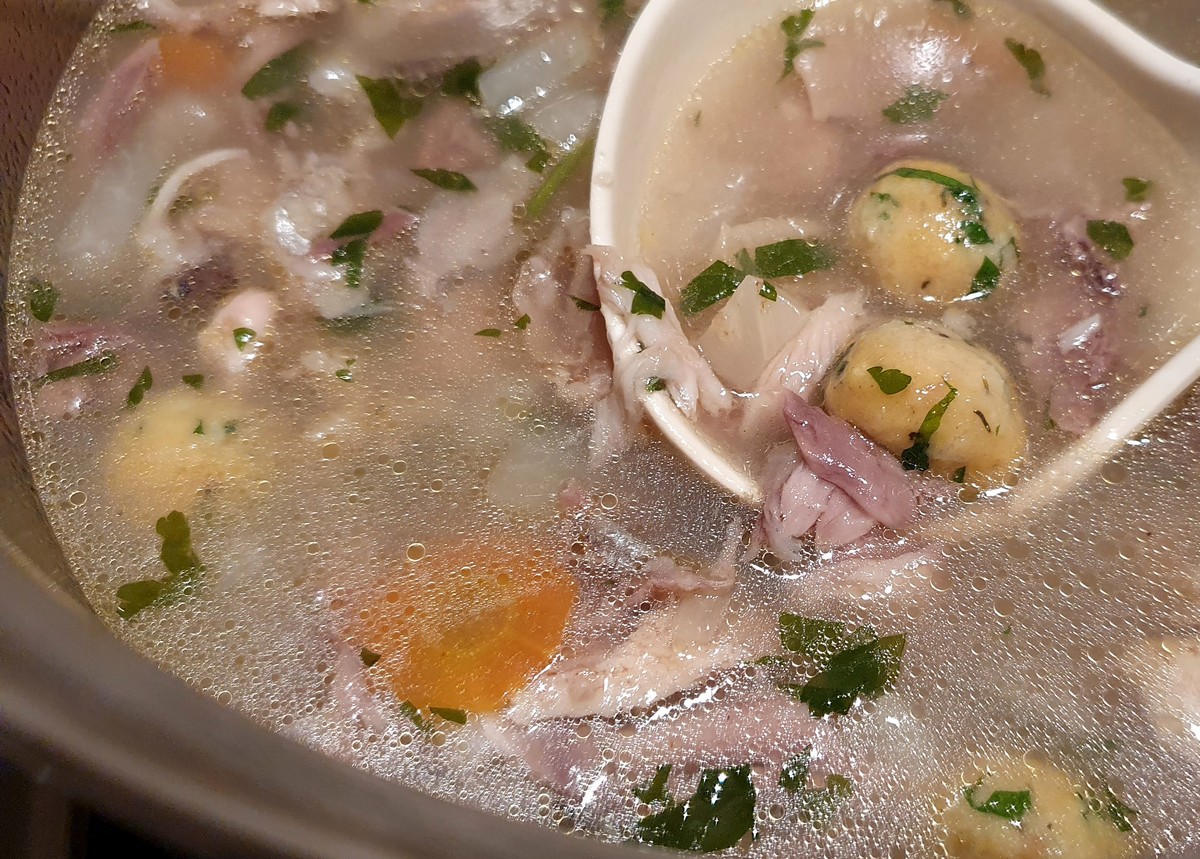 Season the finished soup with salt, red pepper, whole black and white pepper and parsley. The soup should be thick enough.

Balls: Add salt, marjoram, parsley and enough breadcrumbs to the beaten egg to get a dough from which you can form small balls, which you cook in separate water and add to the finished soup. 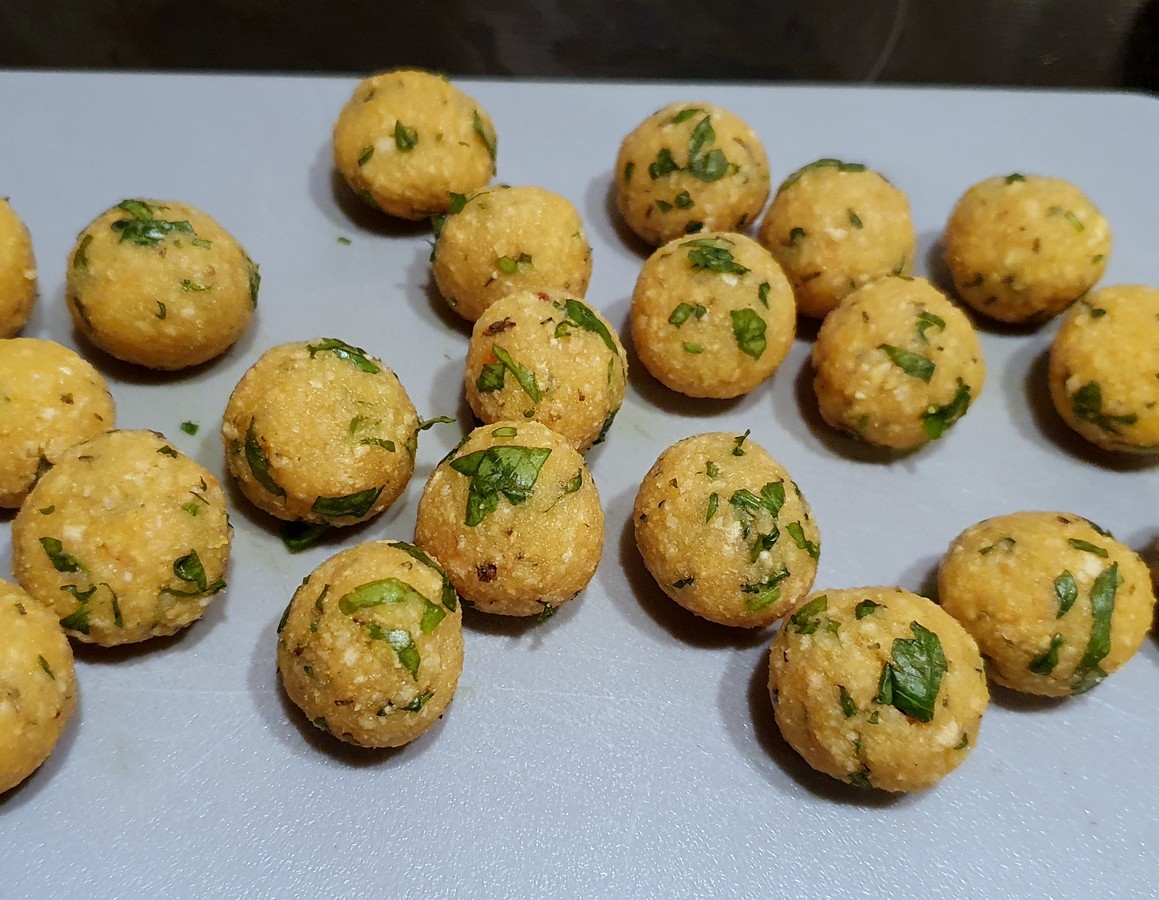 In Slovak families, sauerkraut or fish soup is usually cooked for Christmas. In our family, we also observe other traditions and customs. We place coins and a carp scale under the tablecloth (but you can also put it under a plate or in your wallet and believe that it will bring luck and prosperity). And we always put one extra plate on the Christmas table.

We start the Christmas Eve dinner (December 24) with oblatky – thin wafers – with honey and garlic. By the way, Dushan’s wife Janka bakes that kind of (very tasty) wafer. 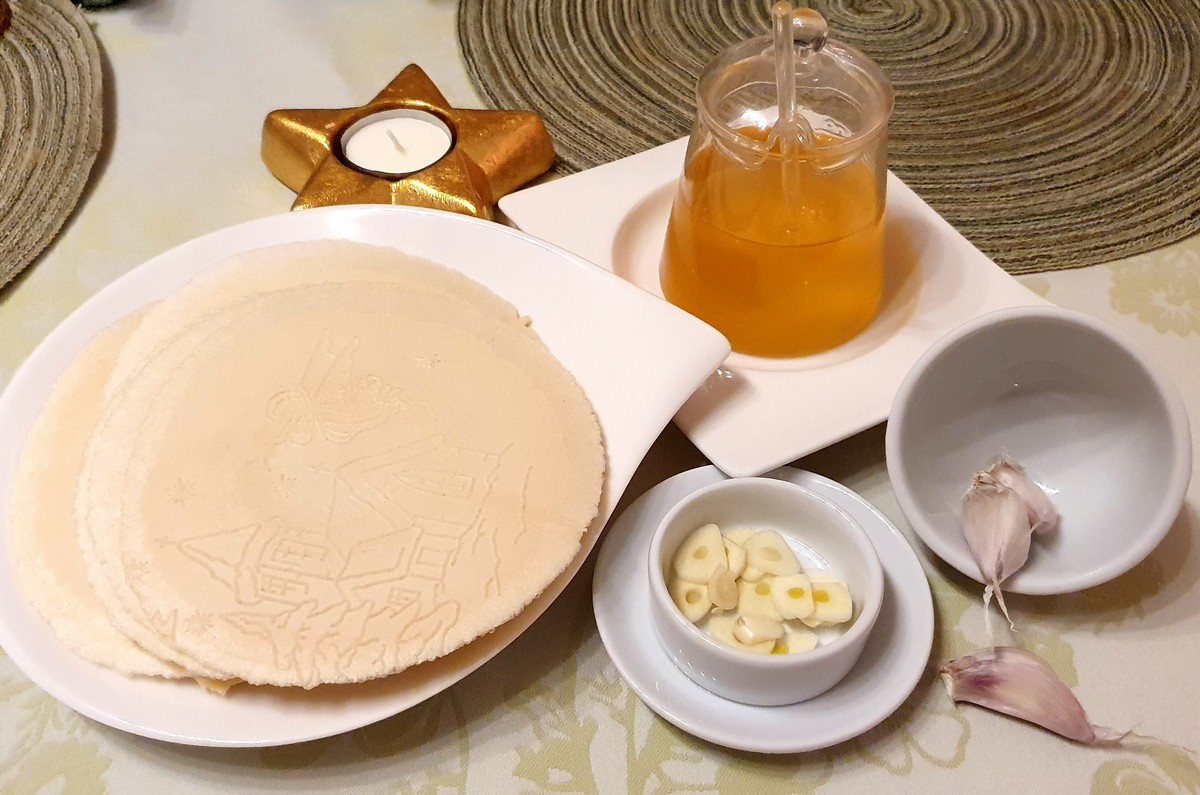 This is followed by carp soup. The carp itself is then served fried with potato salad. 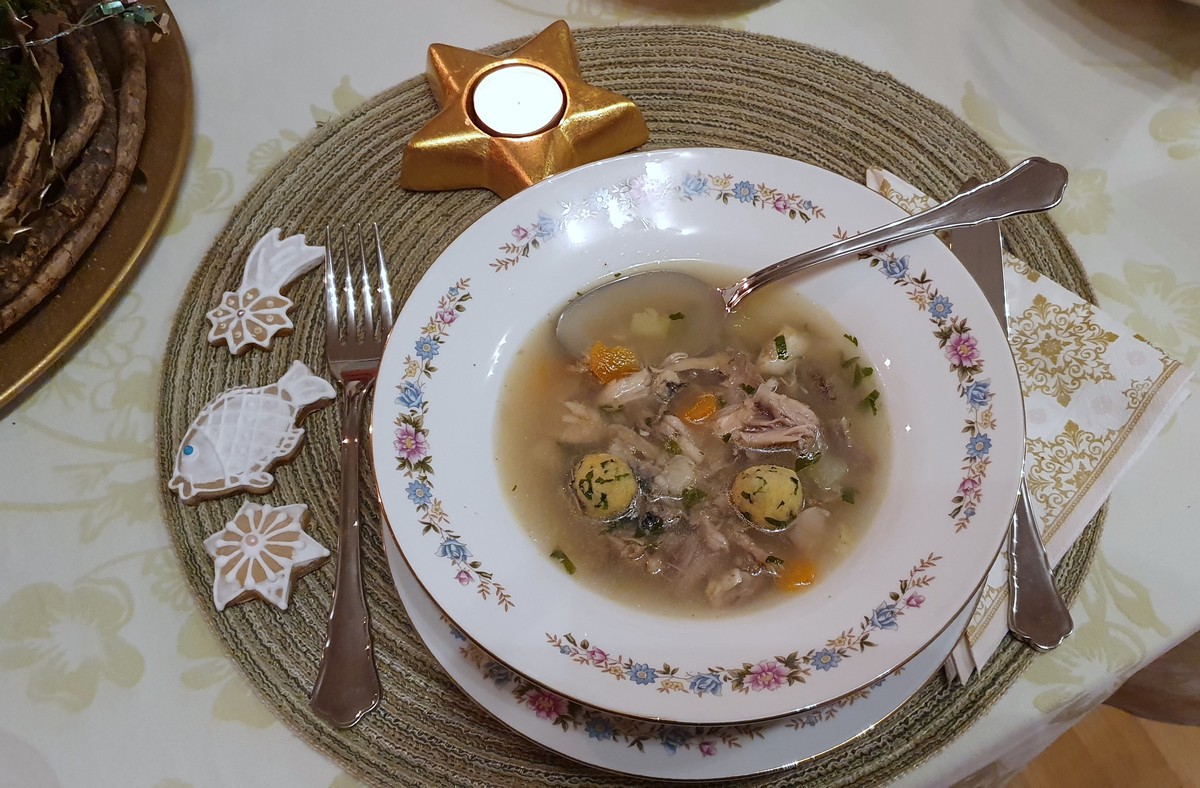 And so we have soup on the table according to Dushan’s recipe, wafers made by Janka, salad prepared according to my mother’s recipe and Christmas cookies like my grandmother used to bake. As if all those relatives and friends were here for Christmas with us, because that’s what the extra plate is about… 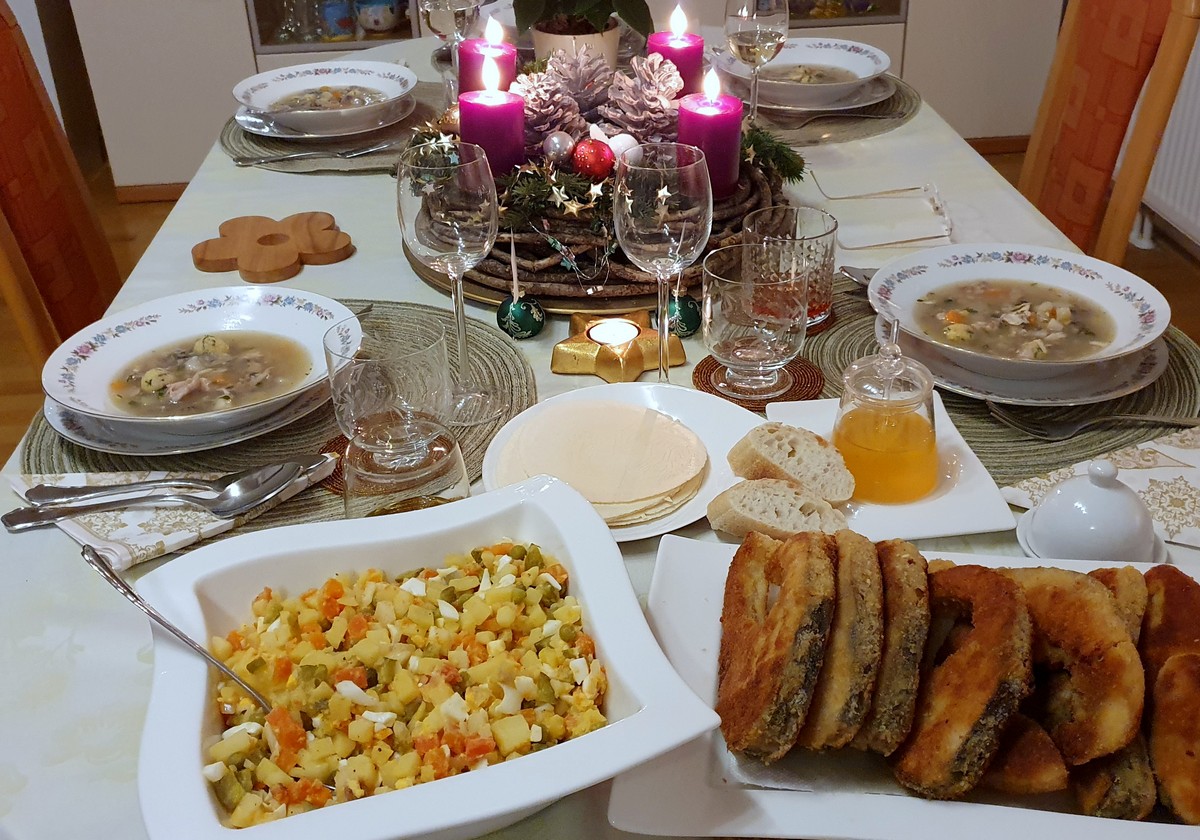 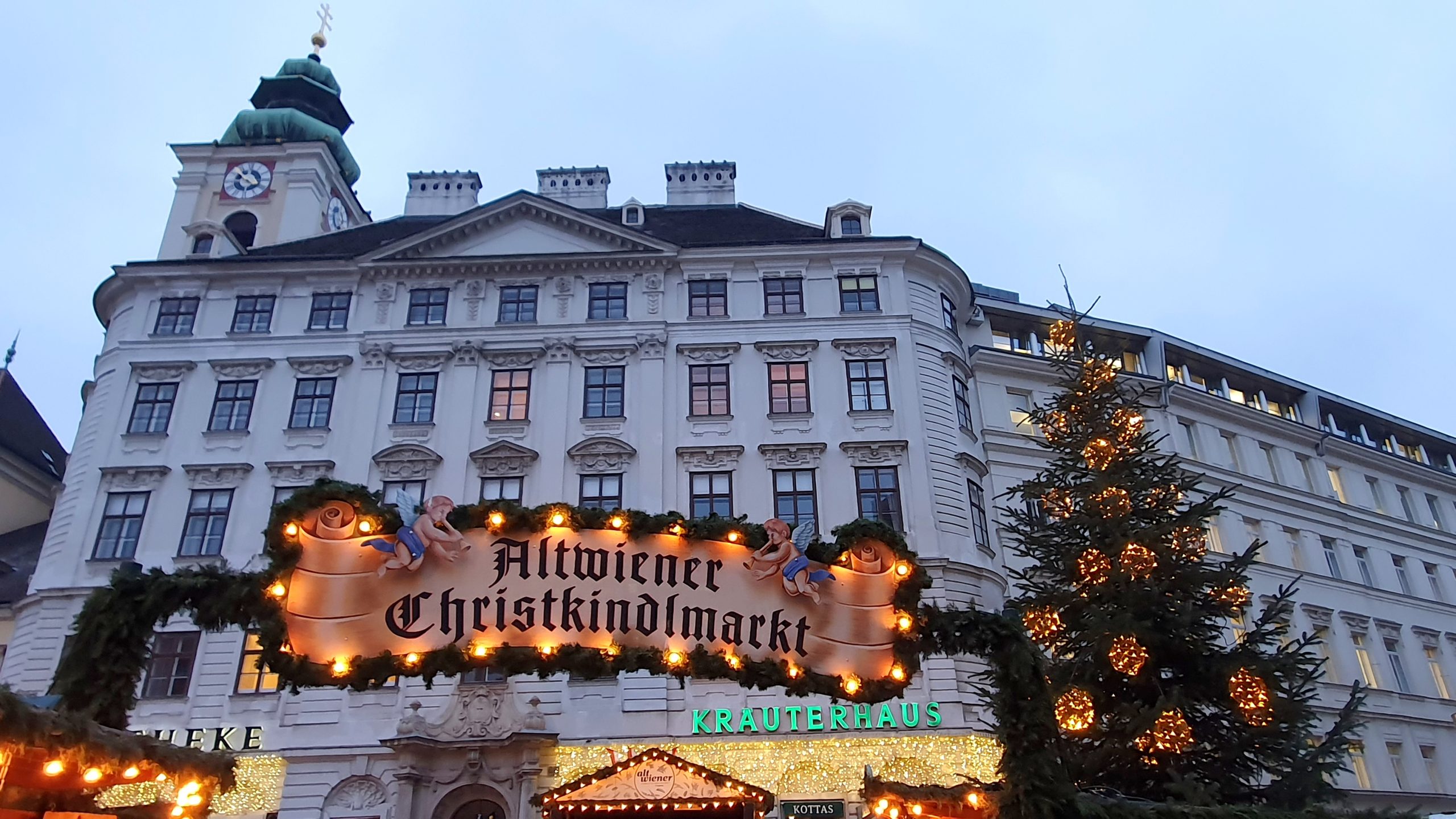 From the History of Christmas Markets – Interesting Bits about Vienna 14 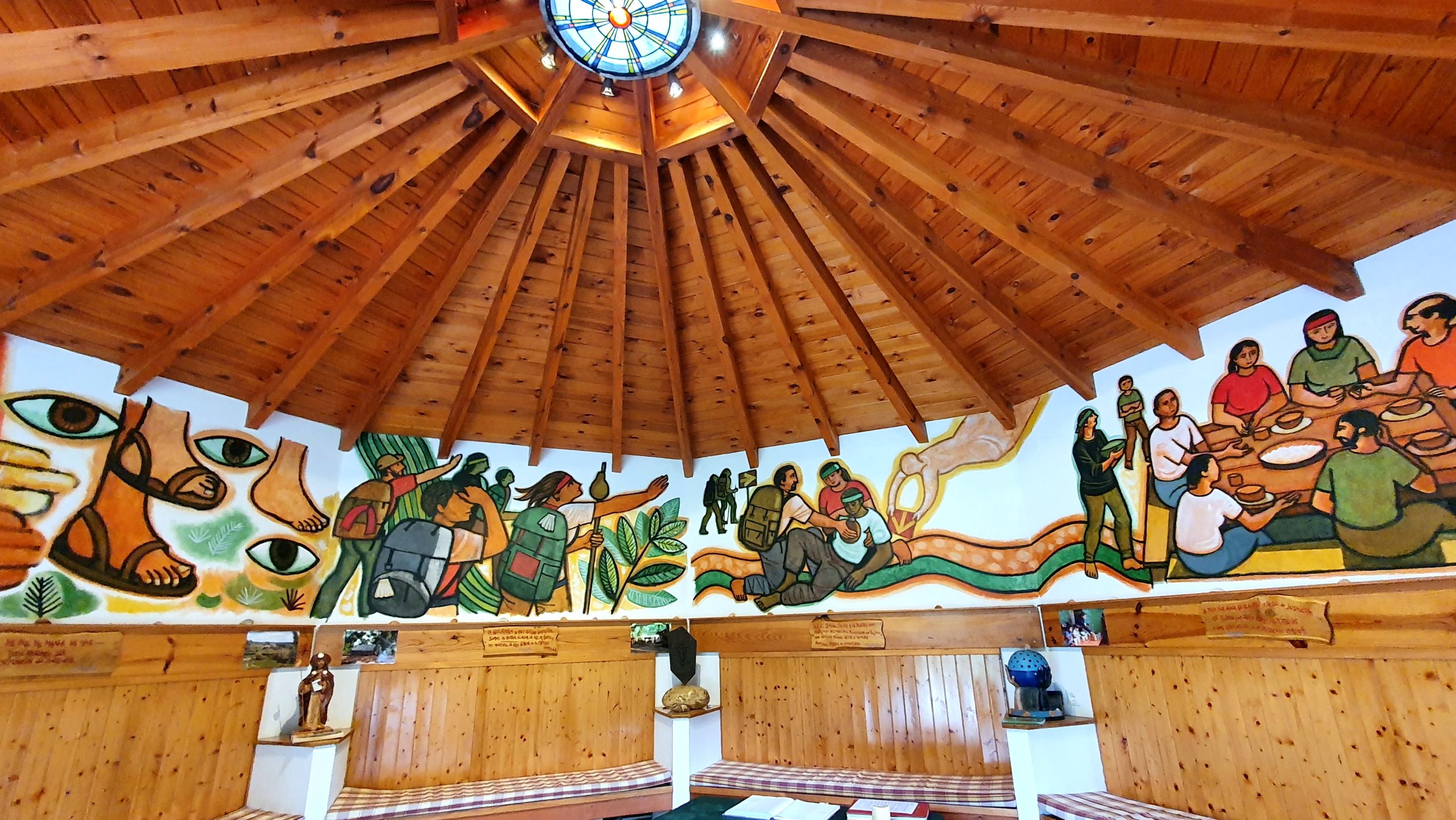