by Ingrid
in Bulgaria, EVENTS, TRAVEL
0

Plovdiv – as the first city in Bulgaria – received the title of the European Capital of Culture (together with Matera in Italy). The local company Studio Punkt created a new logo for this year-long event. For sure, we will see the logo which consists of 7 arcs more frequently this year. I like it very much. Although it is very simple, it represents many meanings and symbols. Actually, everything Plovdiv is proud of: the rich history of the city hidden in 7 archaeological layers, the most important sights – the ancient theater and Roman stadium, the vaults of the churches and roofs of the houses in the Old Town, 7 hills, but also the waves of the Maritsa river which flows through the city or the 7 different cultures which meet on this territory… Some even say that the logo looks like the letter P of the Cyrillic alphabet: P like Plovdiv… 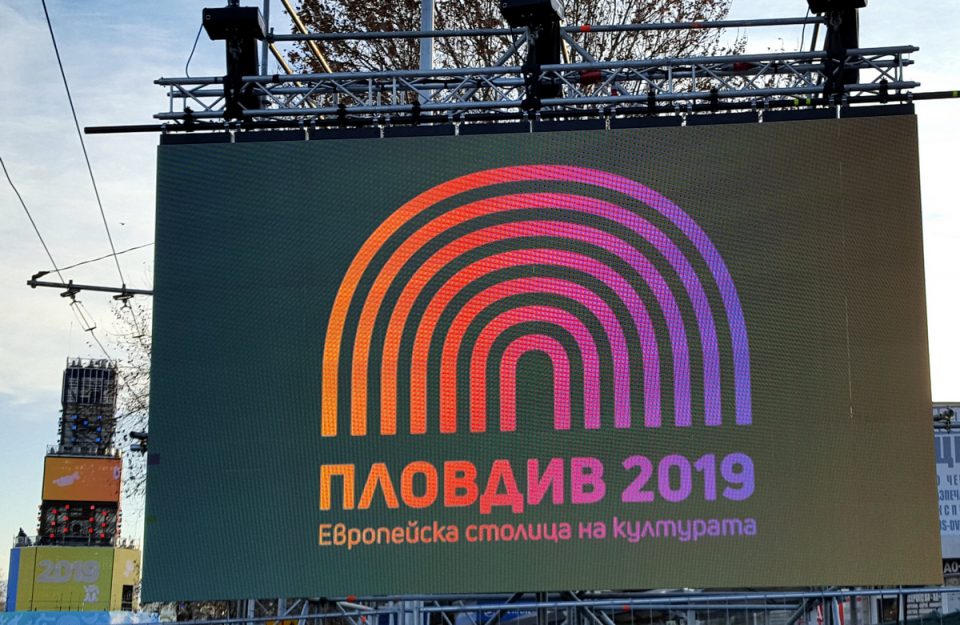 About 300 events will take place during 2019 – not only in Plovdiv but also in the other cities which ran for the same title: Sofia, Varna and Veliko Tarnovo. 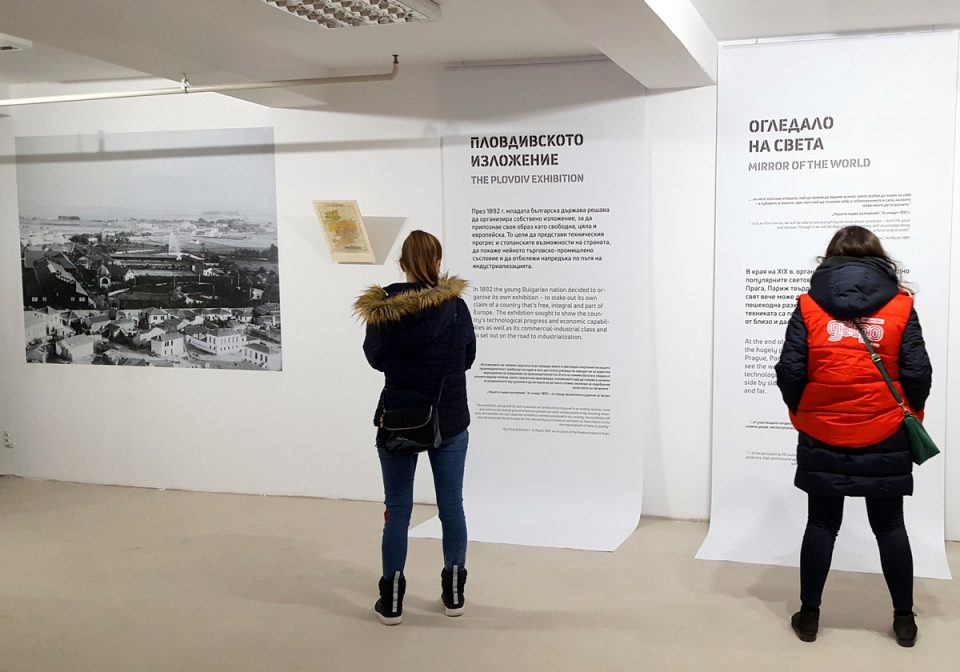 The very first event is the exhibition “Smoke. Tobacco stories.” opened on January 11th, 2019. I was a little bit taken aback by the fact that in the present day, when many countries adopt an antismoking campaign, the organizers of this event in Plovdiv took tobacco for the main object of the exhibition. However, as the curator Vessela Nozharova told me, the city should be grateful to this controversial agricultural product for its progress. Whether we nonsmokers like it or not, the history of the city is connected also to the history of tobacco. Although Ms Nozharova has never smoked, she was always fascinated with this phenomenon full of contradictions – as a poison on one side and a pleasure on the other side, a source of both wealth and misery, the means to both subsistence and health damages… 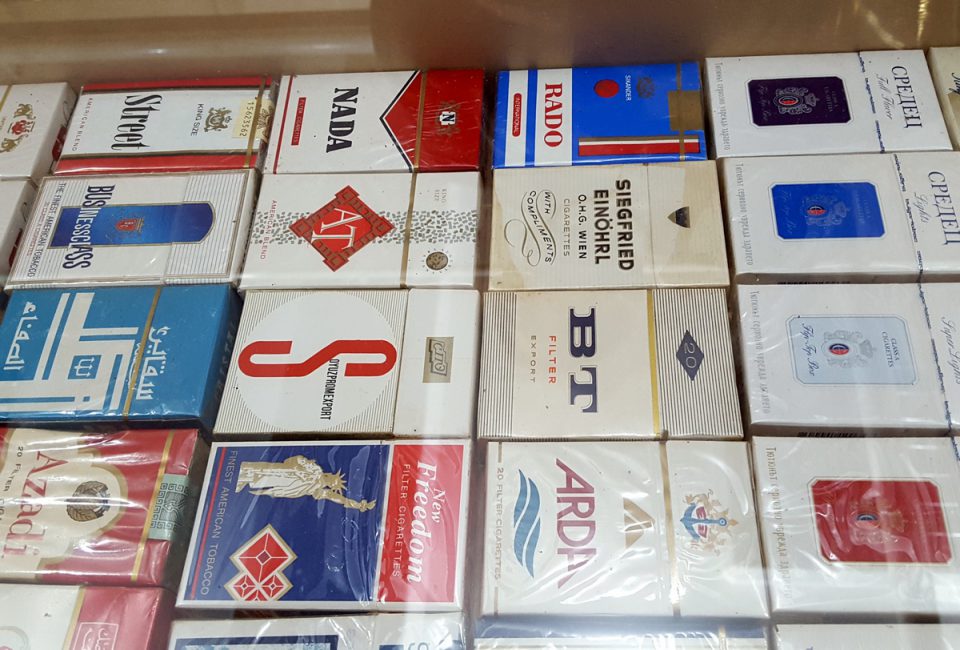 Without tobacco, Plovdiv wouldn’t be the city which it is today. It was formed not only by the people who used to work in the tobacco industry but also by the owners of tobacco factories and rich traders who built their beautiful houses and warehouses here. Soon, the city gained its European character, the transport was developing and new institutions were built – theaters, cinemas and also coffee houses where writers, artists and other intellectuals used to gather to discuss politics, art and affairs of their times in the heavy curtain of tobacco smoke. Even the third most read Bulgarian novel written by Dimitar Dimov is named “Tobacco”. 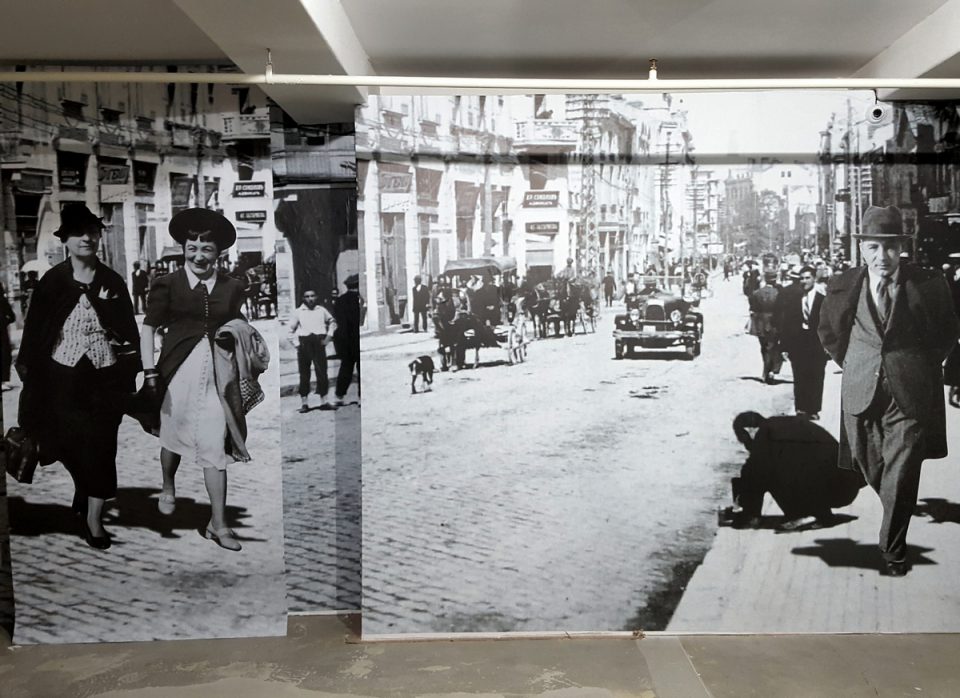 The exhibition is located in four rooms in one of the former tobacco stores which was completely renovated for this event. It will be open until March 30th, 2019. After that, other cultural events will take place here. I just hope that the city will manage to renovate other similar buildings in this area as well.

During the opening weekend, on the occasion of the 30th anniversary of the fall of the Berlin Wall, also the open-air exhibition “Art Liberty – From the Berlin Wall to Street Art” was opened. Until April, you can see several original fragments, mostly from the eastern side of the wall, painted by famous international representatives of the street art. 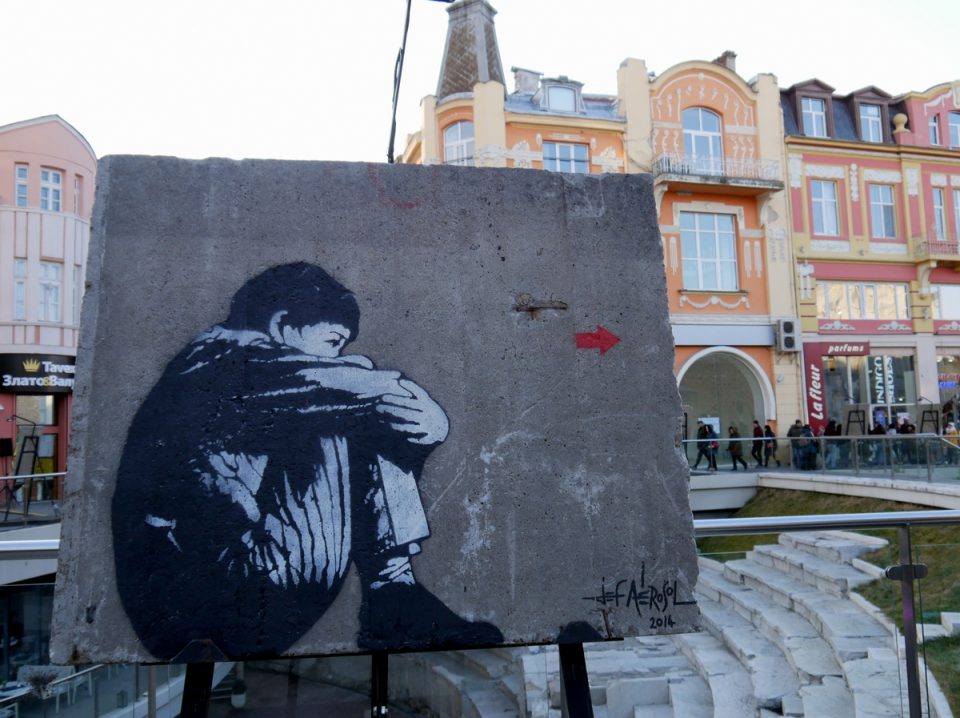 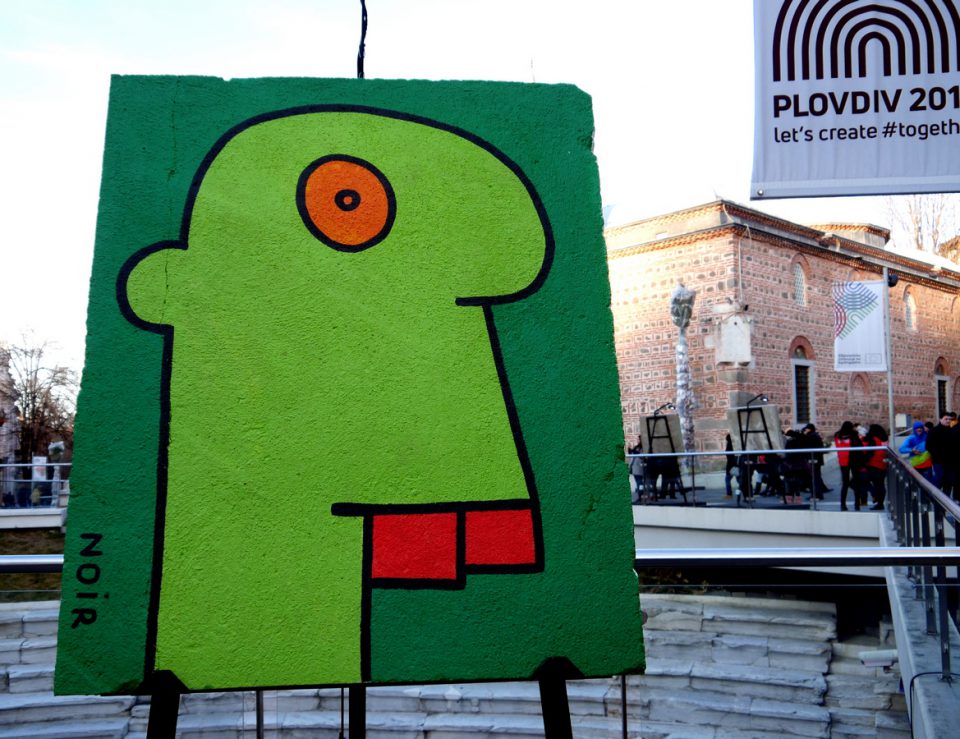 Two concrete pieces are much bigger, they are 3 m high and originally were parts of the western side of the wall. There are portraits of three pop icons painted on them – David Bowie and Iggy Pop by the street art artist Jeff Aérosol and Lou Reed painted by Jimmy C. 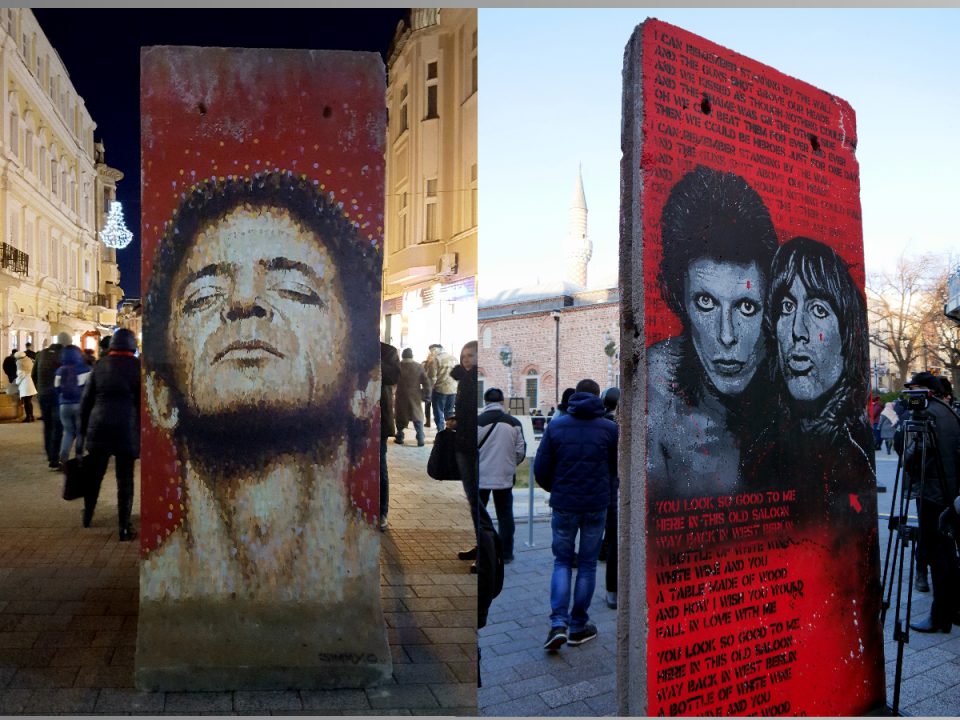 I remember how surprised I was some years ago when I arrived in Sofia and saw a taxi – Trabant. Later on, driving the long way to Bulgaria, we used to count the Trabant and Wartburg automobiles. The numbers between those two used to be pretty equal, but with every year there were less and less of those cars. Nowadays, you can see a Trabant on the Bulgarian streets only rarely. Maybe that’s why three Trabant automobiles – as parts of the exhibitions – attract everybody’s attention. They are painted funnily in bright colours by famous street art artists: Thierry Noir, Christophe Emmanuel Bouche and Kiddy Citny. Almost everybody stopped at one of those symbols of the former Eastern Block to take a selfie. 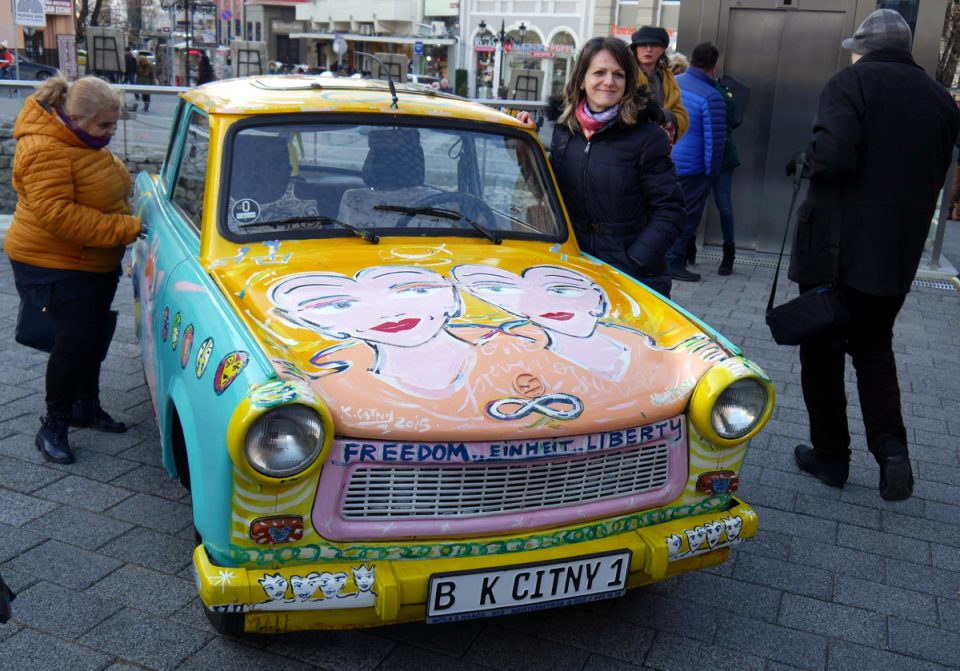 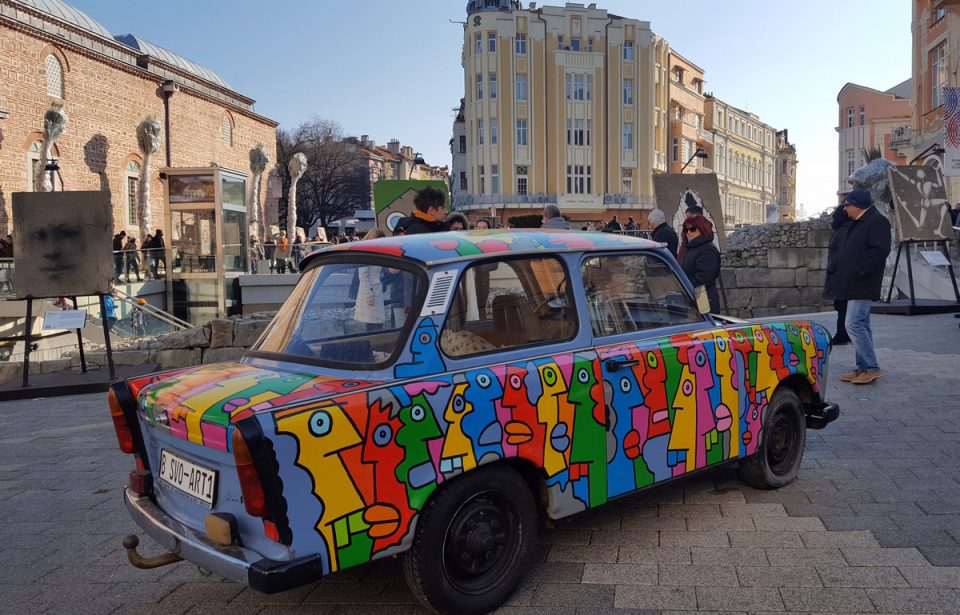 Some people say that the logo of Plovdiv as the European Capital of Culture reminds of the rainbow as well. And that was also the name of the opening ceremony: We Are All Colors. About 1,500 participants presented their performances to tens of thousands of spectators on the 30 m high tower specially built for this occasion on one of the most important avenues of the city. The opening show was a combination of music, dance and lights under the motto #together. At one moment, this word appeared on the screens in different languages including my mother language (Slovak).

I was fascinated by the performance of 200 kukeri – people elaborately costumed and with wooden masks on their faces. They had also smaller and bigger bells attached to their belts, actually lots of bells… Their rhythmic sound was really impressive and I am sure they managed to scare away all evil spirits. What a pity that I was not closer to them to see the interesting costumes and masks better! 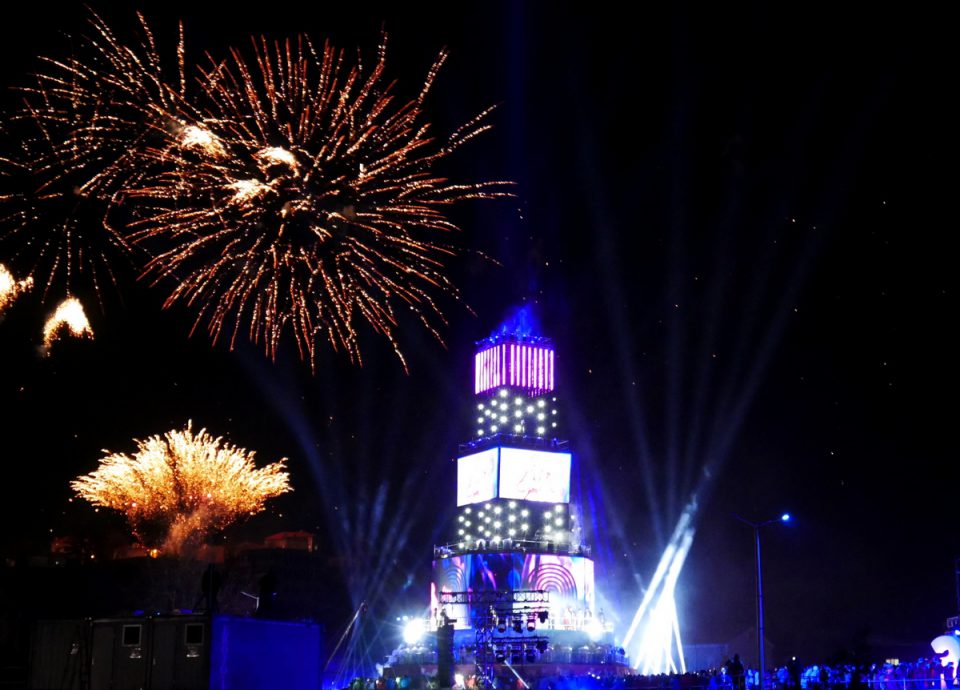 The highlight of the opening ceremony was the firework accompanied by the song “Izlel je Delyo hajdutin” (Delyo has become a hajduk – freedom fighter) performed by the Bulgarian folk music singer Valya Balkanska. It is not an ordinary song. It is part of the Voyager Golden Record – the music collections sent to space in 1977 for some other intelligent civilization… The tones of the song shot in the air together with flashing lights brought a new message. The title of the European Capital of Culture gives to Plovdiv – and also to Bulgaria – a chance to change its image, to become more visible on the world map and to attract more visitors to see the unique historic sights and experience attractive cultural events.

If you plan to visit Bulgaria, Plovdiv should be definitely on your list! More articles about this interesting city: Bulgaria 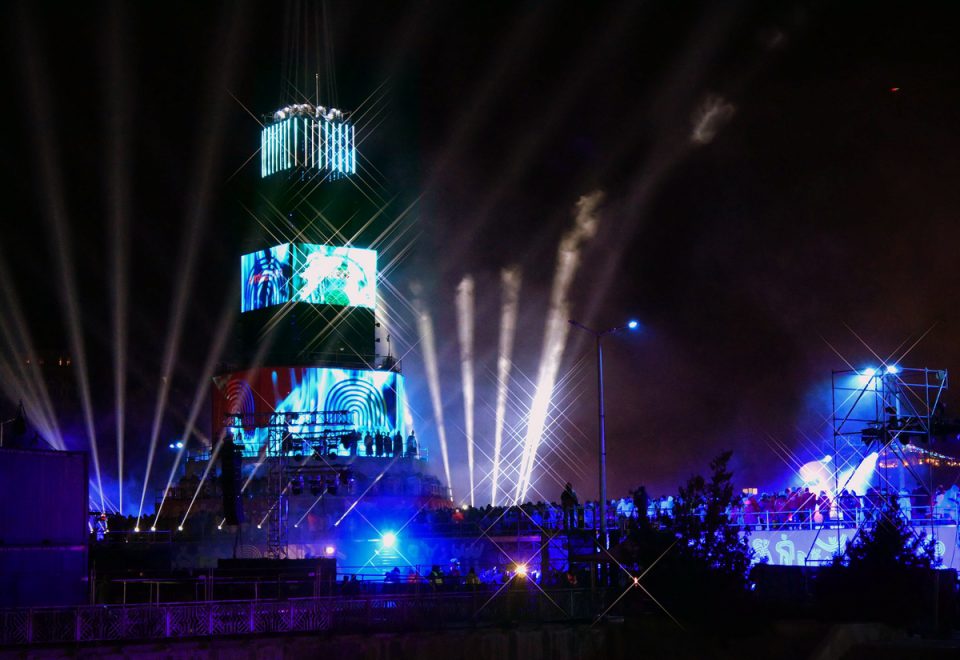 My big thanks to the foundation http://plovdiv2019.eu/en for inviting me to the opening ceremony. 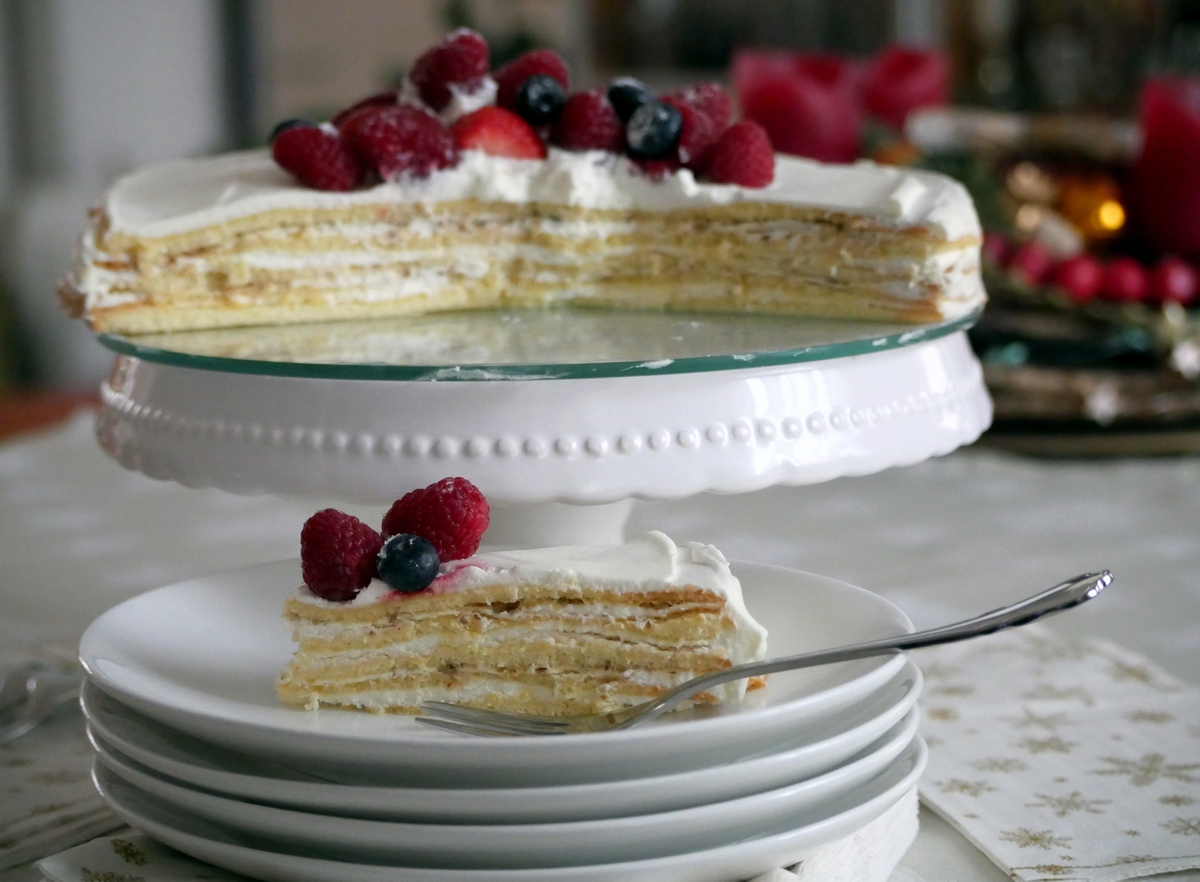 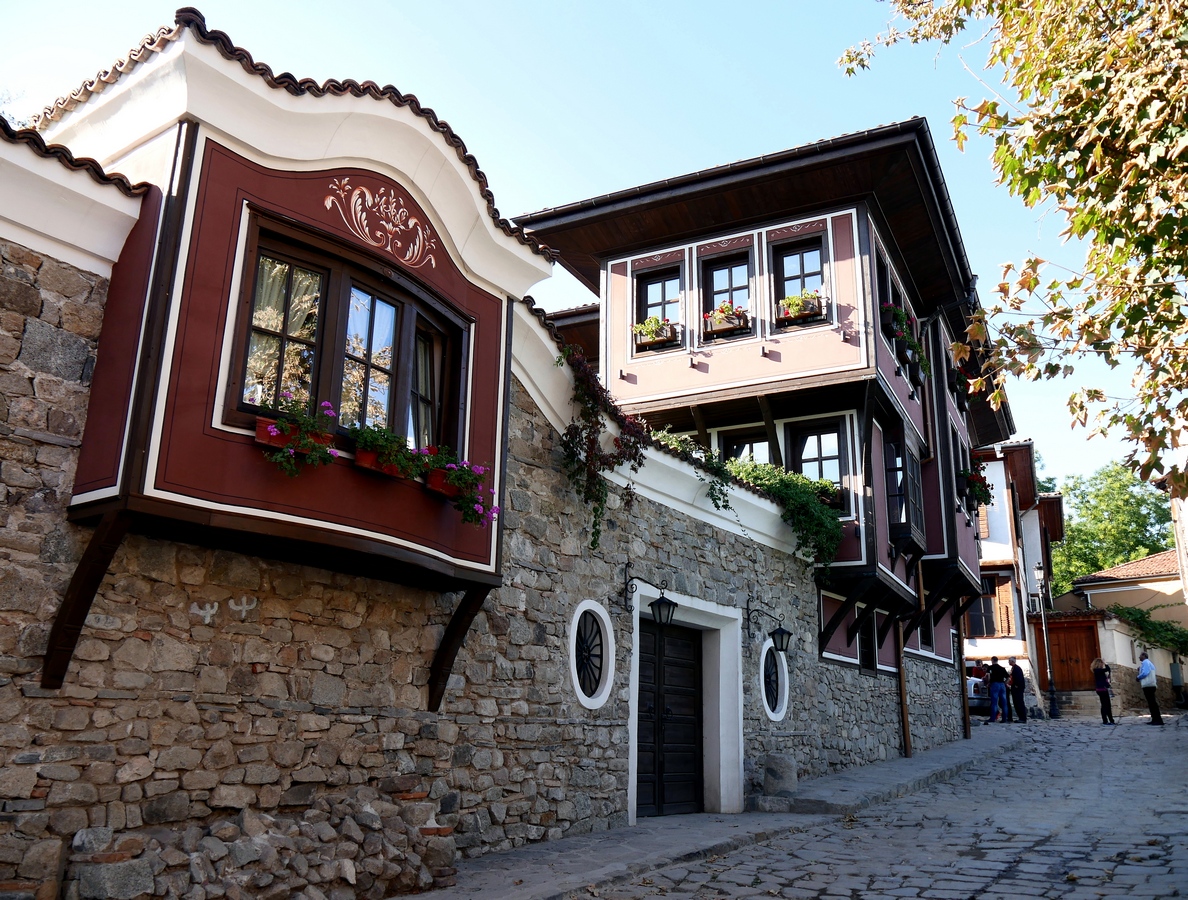