Did you know that Plovdiv belongs to the ten oldest continuously inhabited cities in the world? It is even older than Rome. Discovered objects of everyday life show that the ancient Thracians established their settlement here in the 4th millennium BC. During its long history, the city changed its name several times. Many nations and armies invaded this place – Persians, Greeks, Celts, Romans, Goths, Huns, Bulgars, Slavs, Crusaders and Turks. 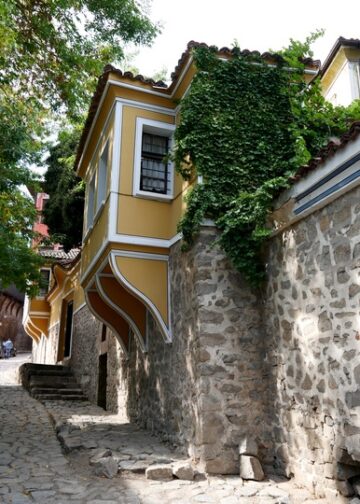 Thracians called their settlement Eumolpia. In 342 BC, it was conquered by Philip II of Macedon who named it after himself – Philippopolis. Romans preferred the name Trimontium which means Three Hills, although originally, the city was – like Rome – situated on seven hills. For 500 long years, Bulgaria was under Ottoman rule, the city was called Filibe in those times. Plovdiv was liberated by the Russian army in 1878 and became the capital of Eastern Rumelia which joined Bulgaria in 1885. 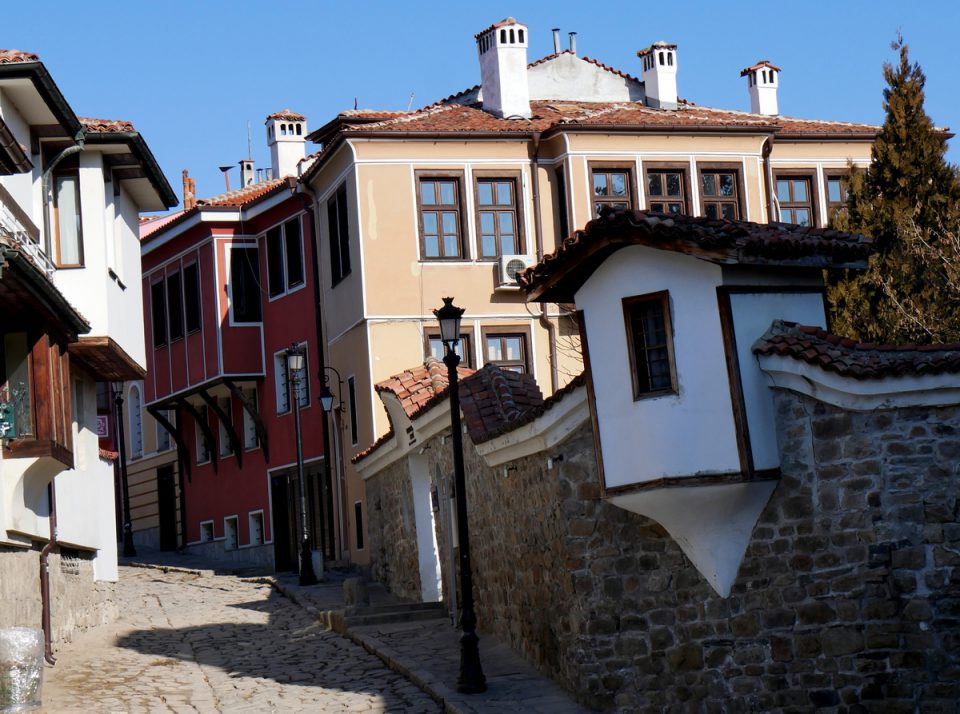 The Old Town in Plovdiv is an architectural reserve. A walk through its cobblestone tortuous small streets reveals not only picturesque places but also the historical microworld of the different stages of the development of this city – from the ancient times through the Middle Ages until the period of the national revival. 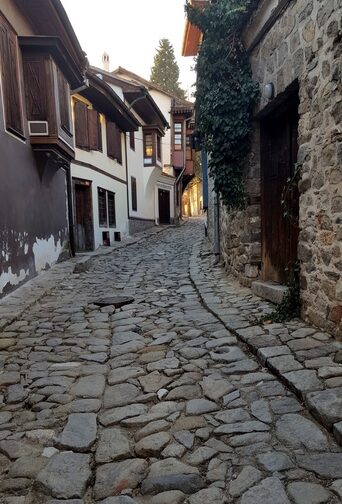 You should wear comfortable shoes for this walk, put off stress and slow down. It may be very hot here in summer, even so, you can enjoy ivy climbing on the stone walls, bunches of ripening grapes, pumpkins looking like bottles or a pleasant smell of roses. 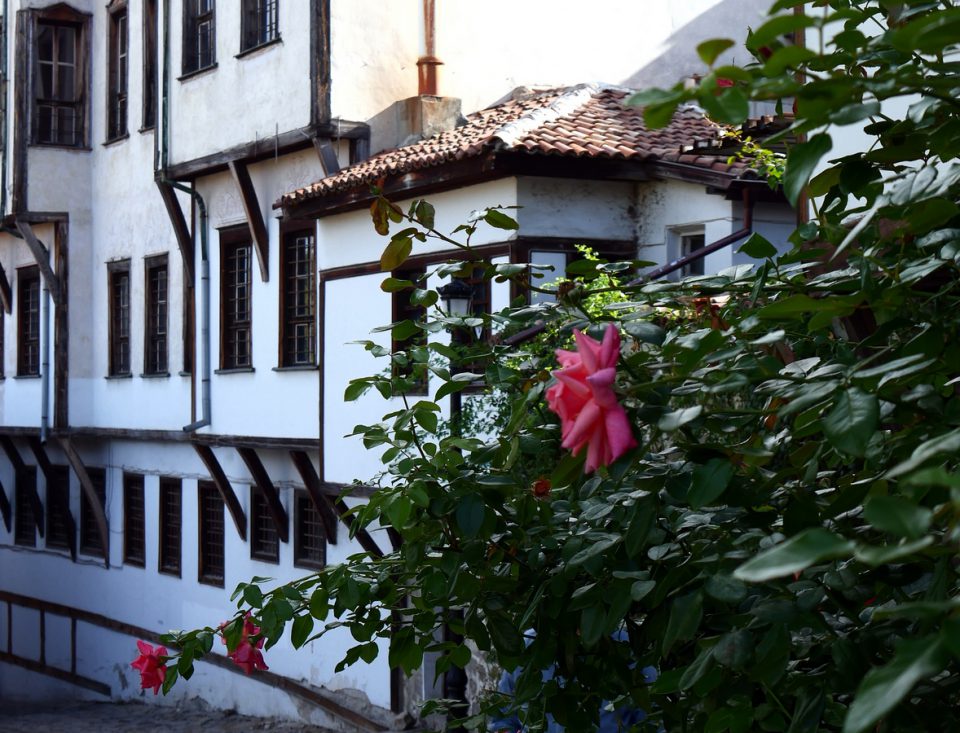 You can get lost in the narrow streets, but there are signs with the street names and also direction signs both in Bulgarian and English. 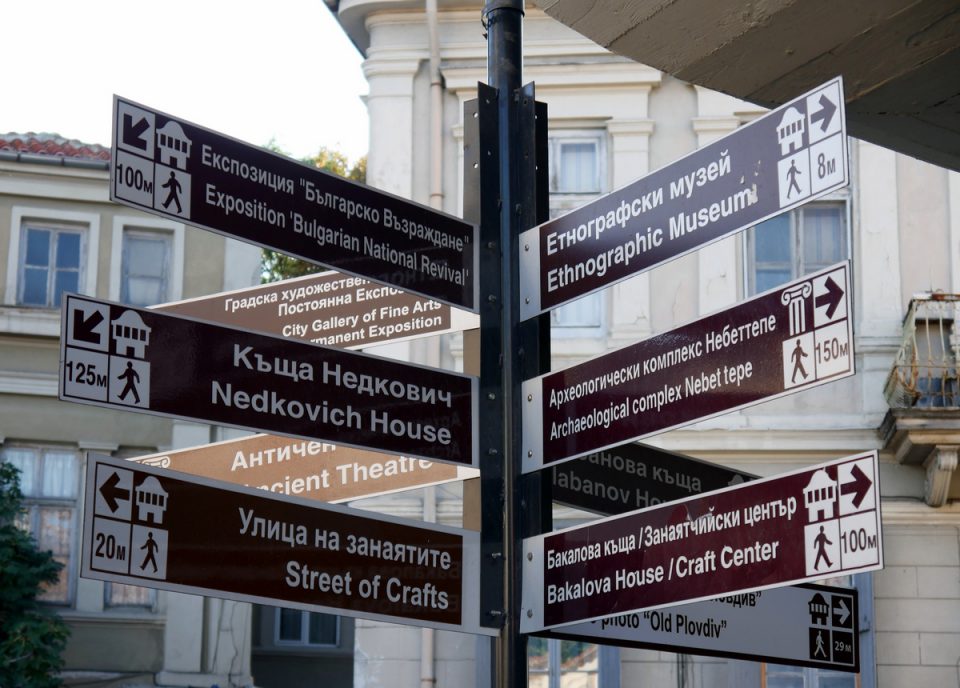 Nebet Tepe (The hill of the guards) is one of the three hills of Trimontium, a cult center where Thracians practised their sacred rites long before they had built their residence here. The sun burns mercilessly in summer or the wind can be very strong here but the view of the city and other hills is worth the effort. 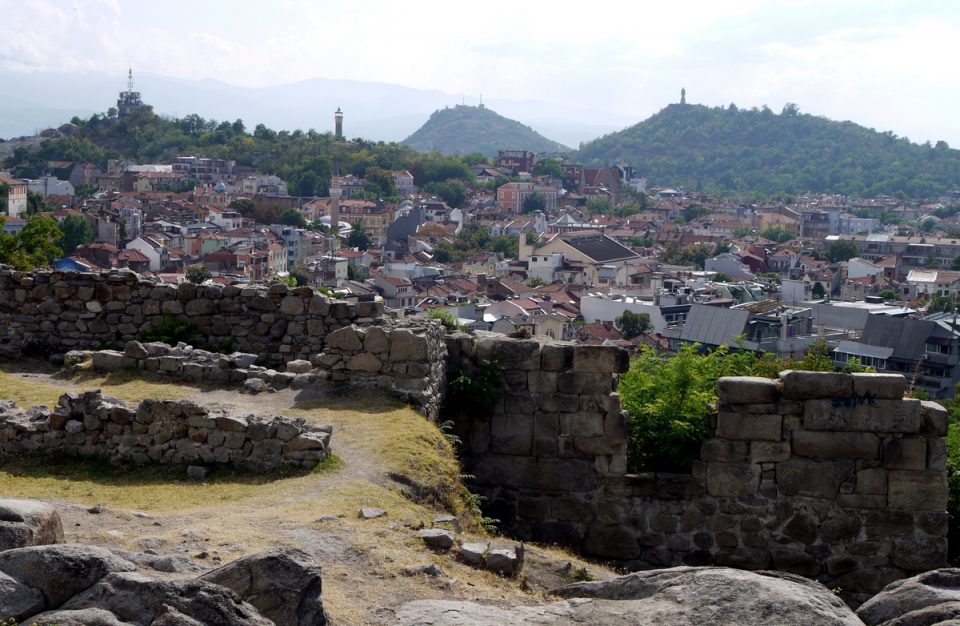 The huge syenite blocks are remains of the massive walls surrounding a temple and palace, two water reservoirs, parts of the fortress, towers and other buildings. If you want to know more about the Thracians, you can read our article: In the Footsteps of the Ancient Thracians 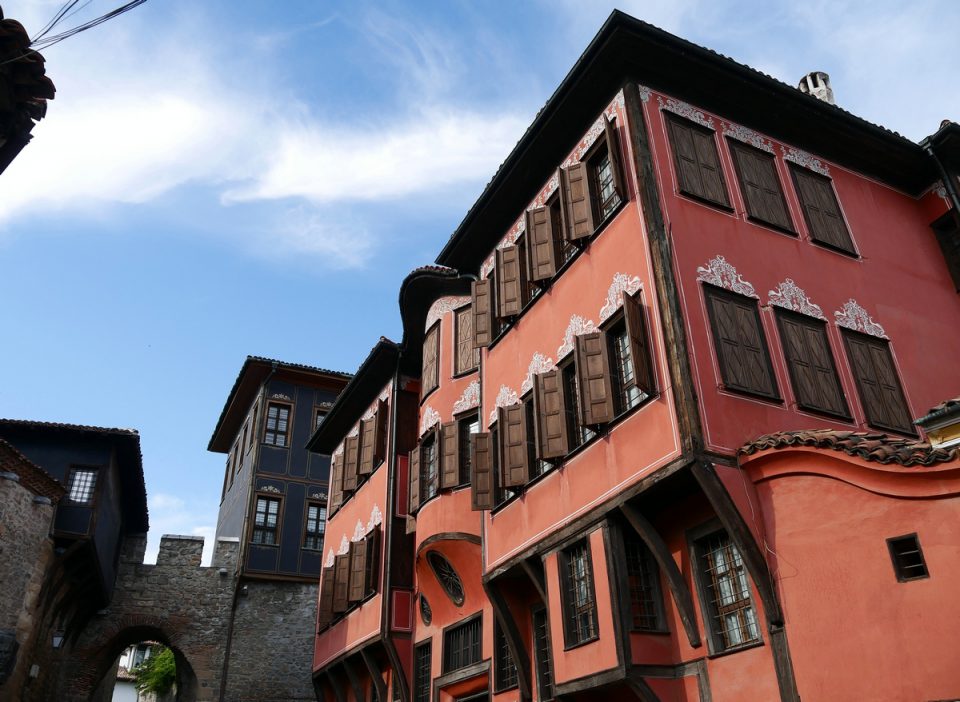 Hisar Kapia is a medieval gate from the 11th century, once a part of the fortification system of the town. After the Ottoman invasion, the gate lost its significance. Rich traders and merchants started to build their luxurious houses and warehouses on the ruins of the old stone walls around the gate. 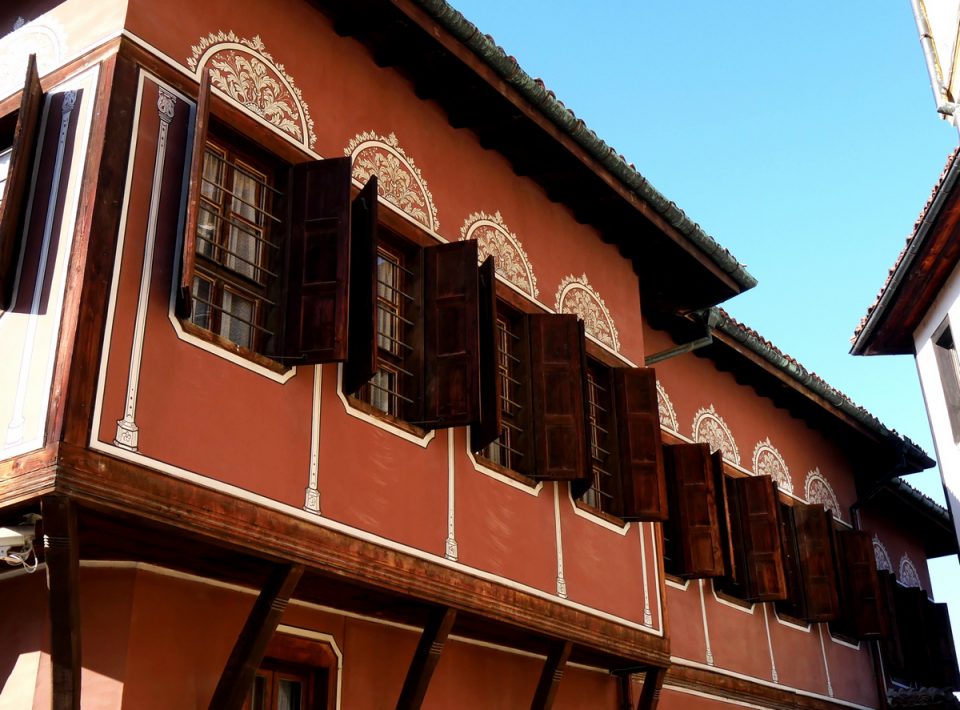 The houses have a peculiar form, they become larger on the upper floors which makes the living space bigger. The facades of the houses shine in bright colours, they are painted with ornaments which combine Baroque and folk elements. The windows have wooden shutters and balconies and oriels stick out from the walls into the narrow street, usually supported by wooden columns. Some houses are so close to each other that neighbours could shake hands. 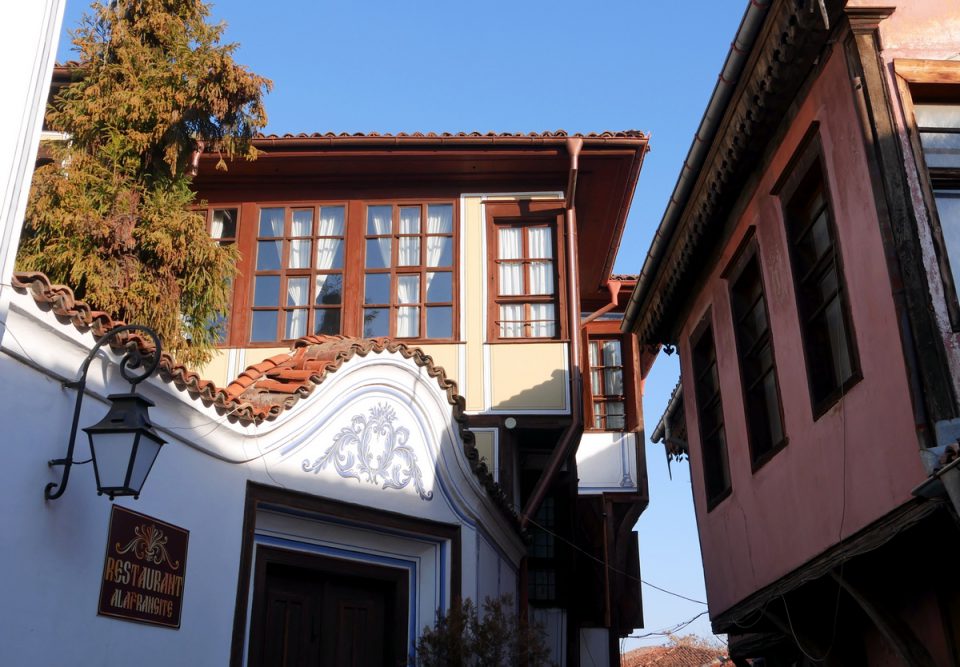 You can find one of the most beautiful small “balconies” near the Ethnographic Museum. It is said to have a strategical function but I find another explanation much more interesting. 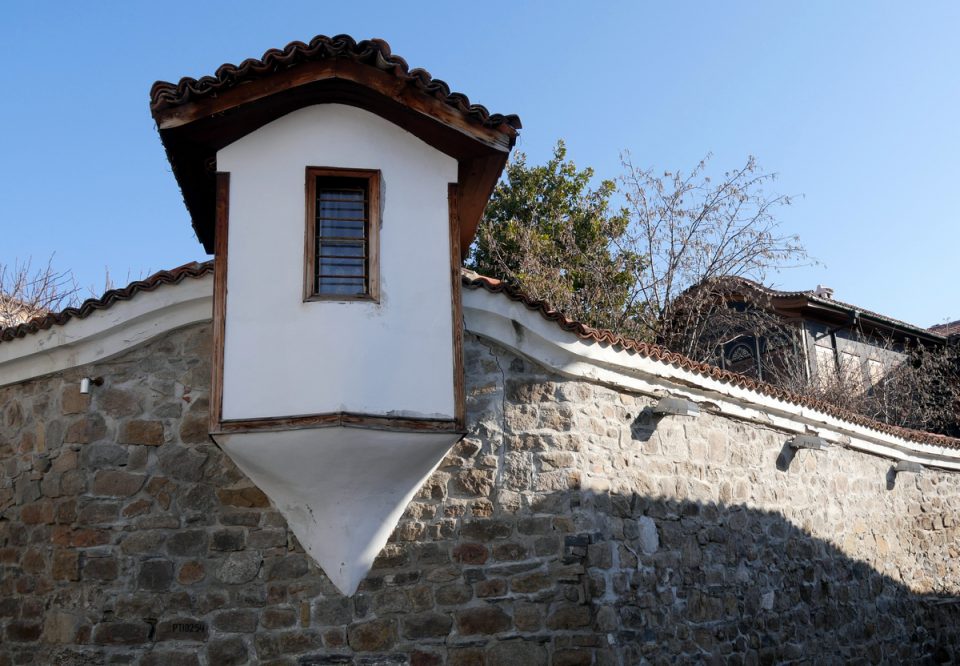 Once, it was impossible for women to go out alone, so they were sitting on those balconies watching what was going on in the streets and listening to the newest gossips. That is probably why this architectural element is called “kliukarnik” (gossip-corner). 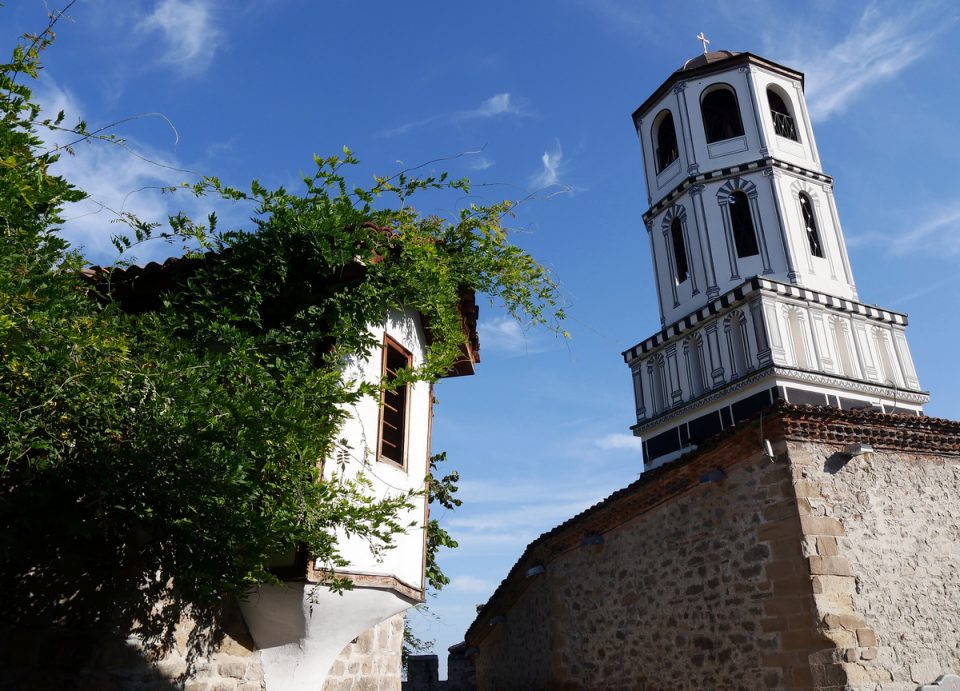 The streets of the Old Town are lined with about 200 houses. In the 17th century, Plovdiv became one of the most important economic centers between the West and the Ottoman empire. During that time, this new type of urban dwelling – “Plovdiv city house” started to be built. 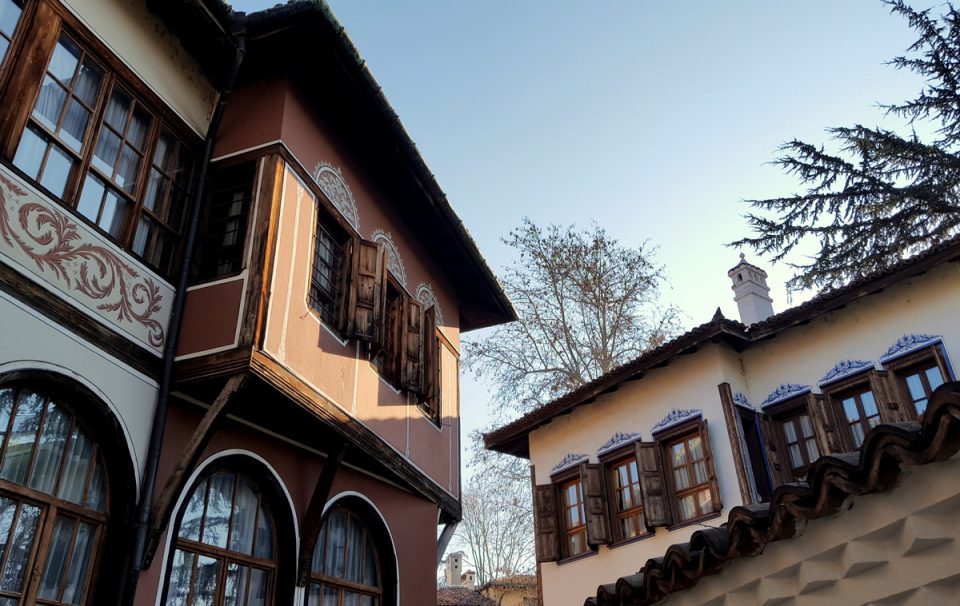 The 19th century brought the National Revival process into the city. Most prominent families became supporters of art, church renovation, the revival of the Bulgarian language, culture and literature. They built these houses which belong to the top architectural works in Bulgaria today. Some of these houses were transformed into museums with original equipment, the other ones are galleries. No wonder, since the spirit of the Old Town has always fascinated and inspired many Bulgarian painters, writers and poets.

Exploring the Old Town, you should definitely visit at least these two houses: Klianti and Balabanov. Alafranga is one of the typical elements in the houses. It is a French niche, a false window with painted open curtains most often showing a view of an idyllic garden with a fountain, trees and flowers…

I was fascinated by the grandiose staircases, interior windows which enable a look from a room directly at the central space near the staircase and especially by the ceilings. The unique ceiling in the Klianti house is richly carved and painted. There are even glass elements and gilt parts of woodcarving which add a special glint to it. The ceilings in the Balabanov house are not so lavishly embellished, nevertheless, they are also very nice and elegant. 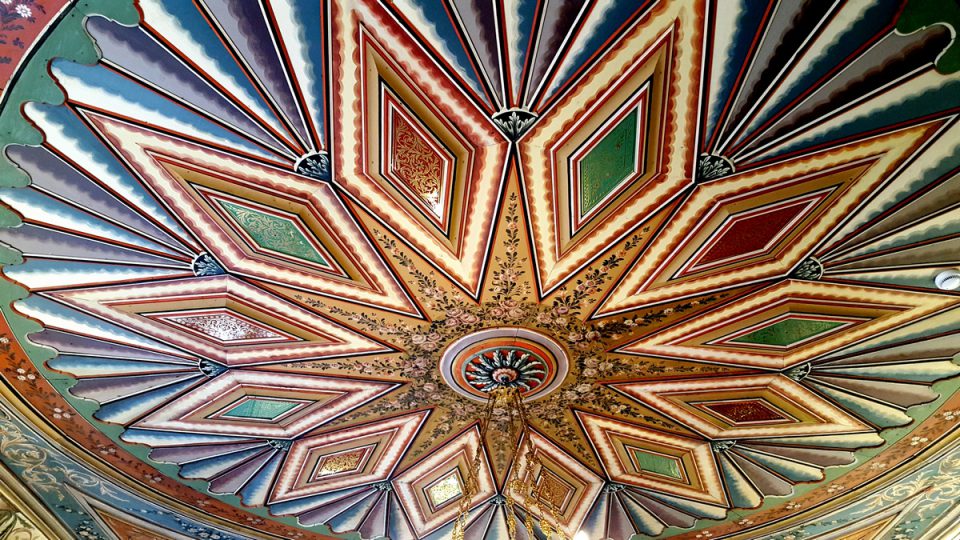 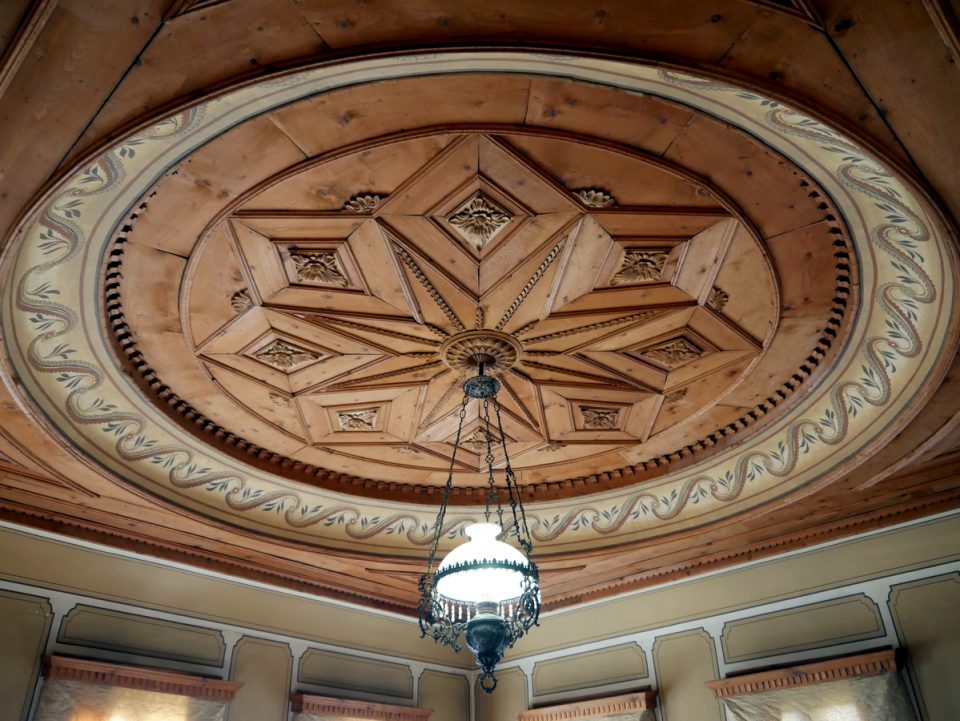 The most decorated room was used for business meetings, receptions and as a guest room. One of the most opulent rooms can be visited in the Klianti house. Look at the wall with a niche, incorporated shelves (some are hidden directly in the wall) and gorgeous paintings. You have to come very close to recognize some birds among the bunches of grapes, apples and garlands of roses… 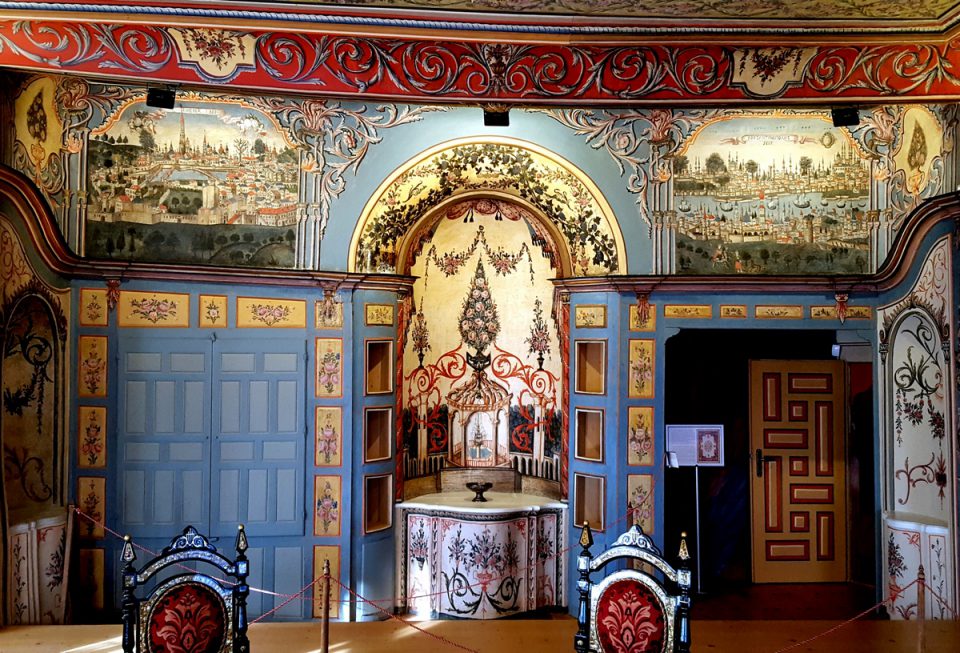 In the house of Dr Sotir Antoniadi, there used to be one of the best-equipped pharmacies in Plovdiv. Even if it is closed – as it happened during my last visit – have at least a quick look through the window. 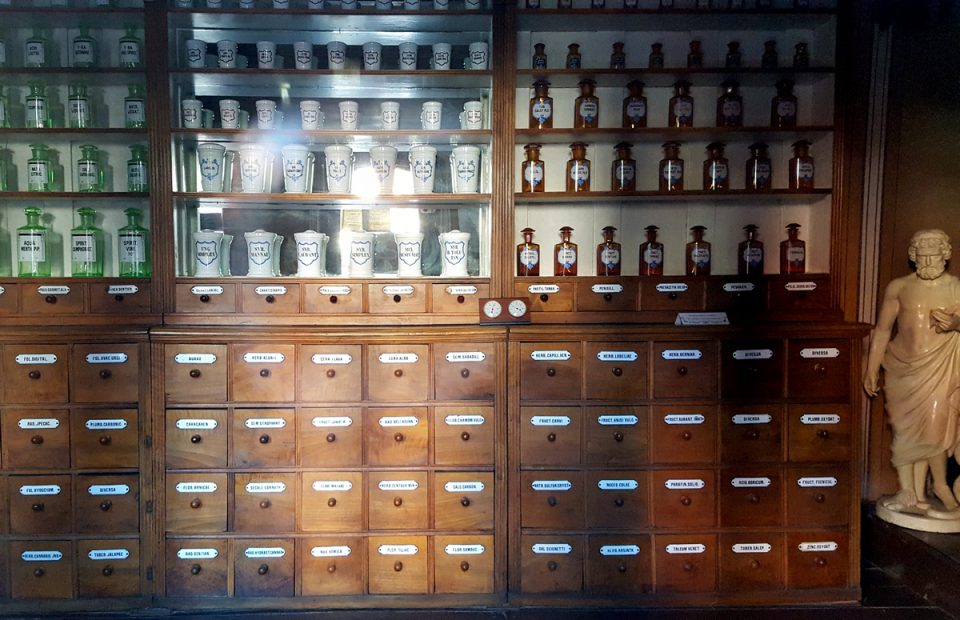 The biggest house was built in 1847 for the merchant Argir Kouyoumdjioglu. He left for Constantinople after Bulgaria was liberated from Ottoman rule. In the 20th century, a tobacco trader bought the house but he intended to demolish it and build a tobacco warehouse here. Thank God his plan was denied by the municipality. The house is a jewel, a highlight of the Baroque architecture in Bulgaria. 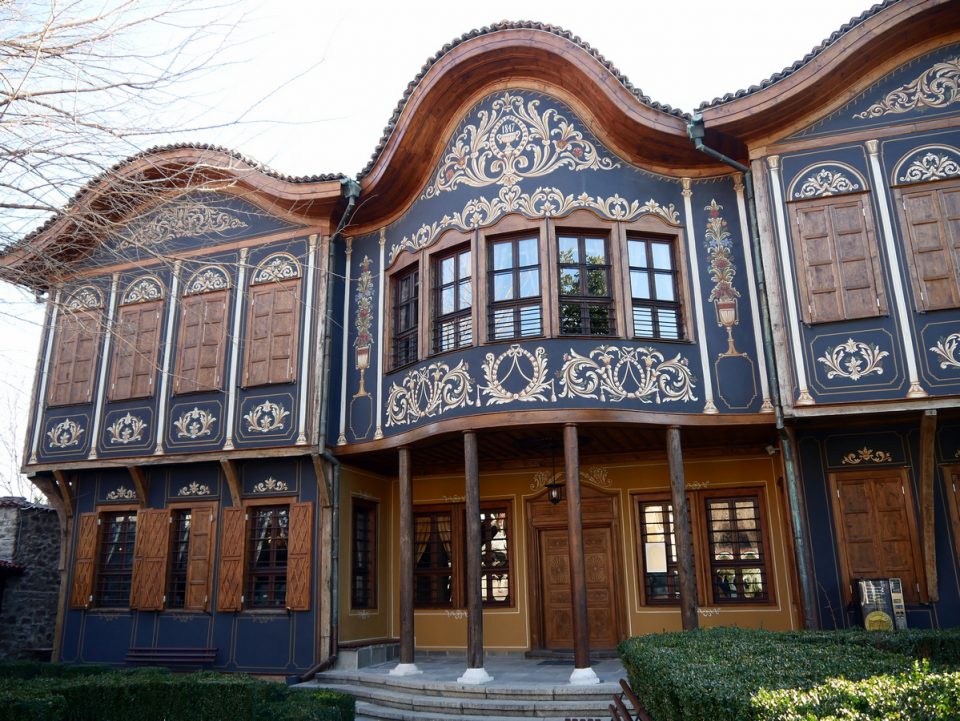 Every time I visit the Old Town in Plovdiv I make a short stop in the Bakalov house from the 18th century as well. There are small shops and workrooms inside. I speak a few words with the craftsmen and feast my eyes on beautiful things: woven tablecloths, felt shawls, jewels made of small beads, flowers, baskets and other objects of corn husk… 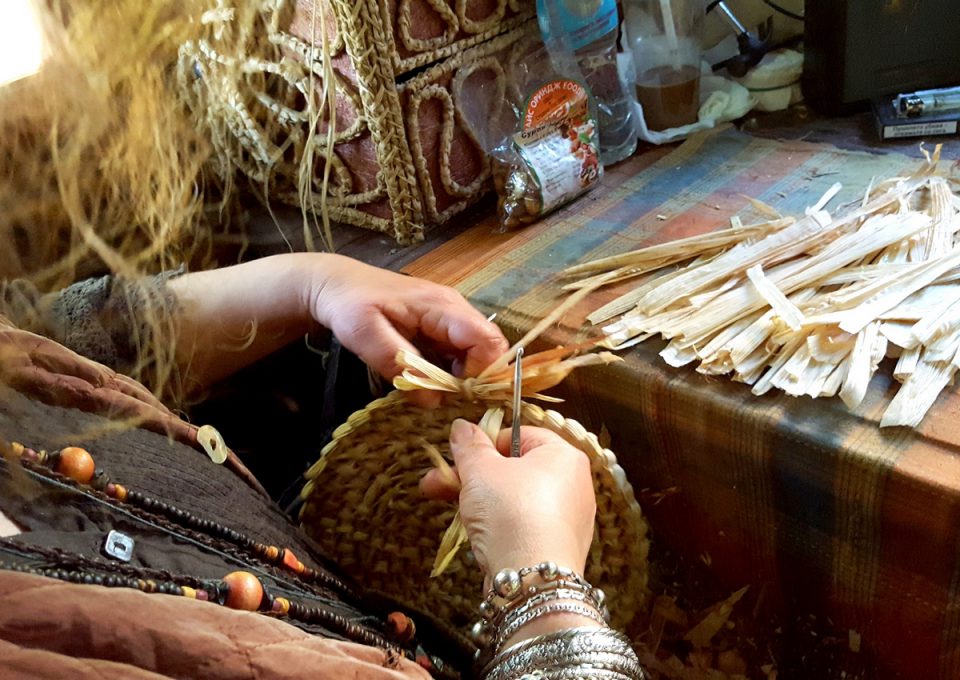 However, that is not everything! You can even find a Street of Crafts in the Old Town! Old crafts come to life in the renovated houses: a lady is painting typical dazzling patterns on pottery, pleasant smell of fresh bread or the clapping of a weaving loom are coming out another house, a blacksmith strikes a metal stick with a hammer and a maker of music instruments cheerfully blows a new whistle or taps on a huge drum… 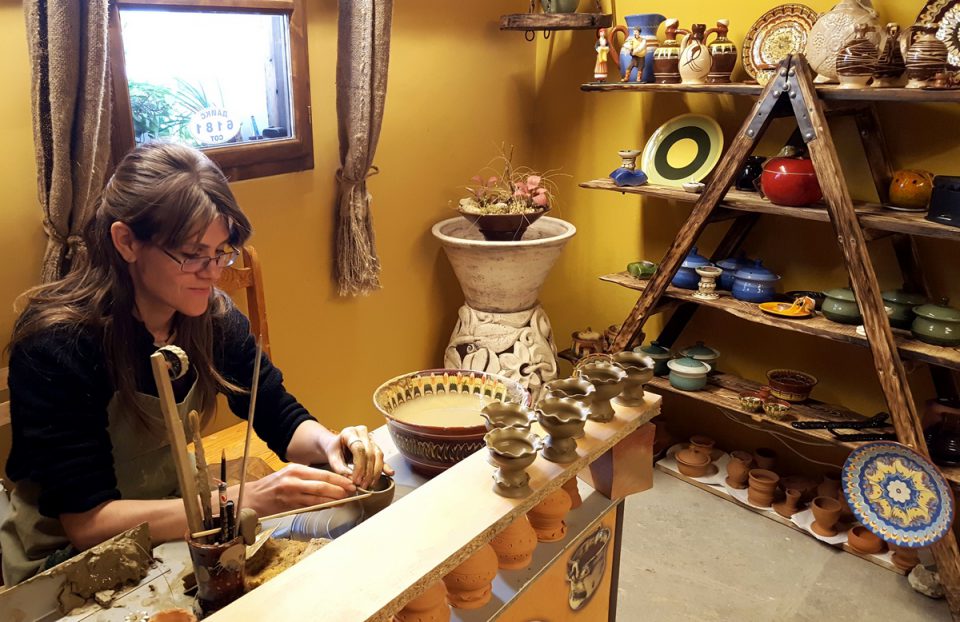 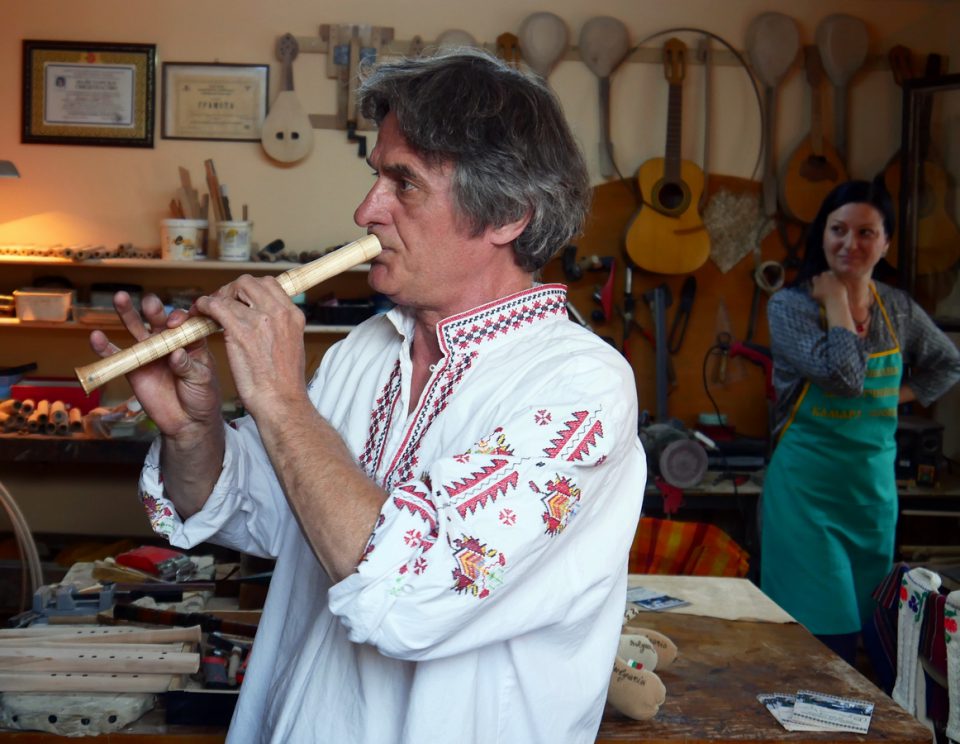 On the walls, there are hanging woven pictures, sheep bells and amazing colourful compositions made of laces which are used as decoration in Bulgarian national costumes. There are even those pumpkins that look like bottles. They are painted with typical figures of lelichki and chichkovci – aunts and uncles. It is really difficult to resist the temptation to buy some souvenirs here… 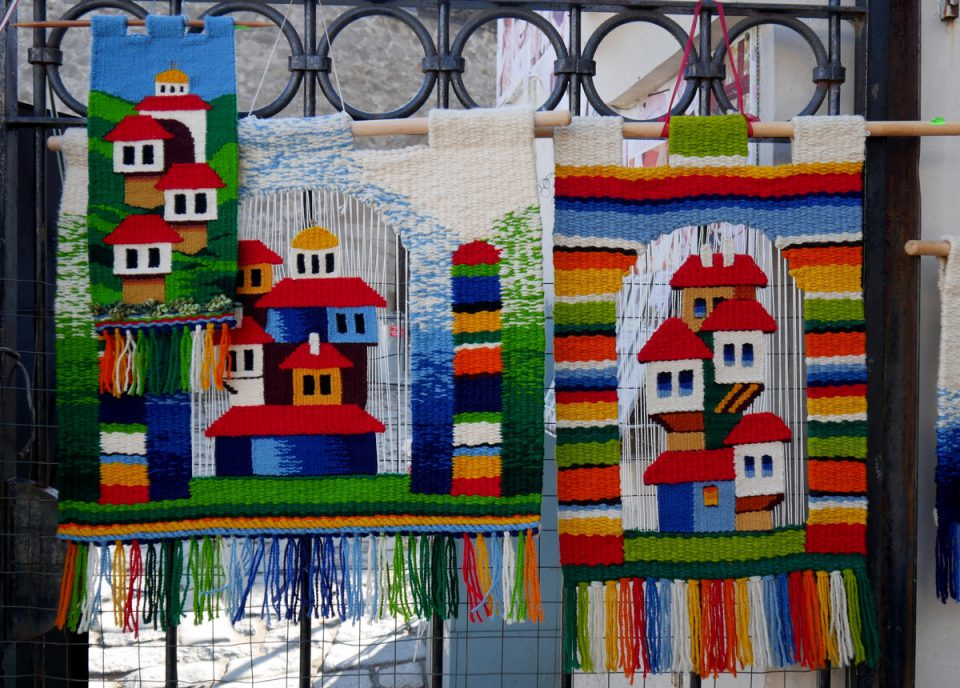 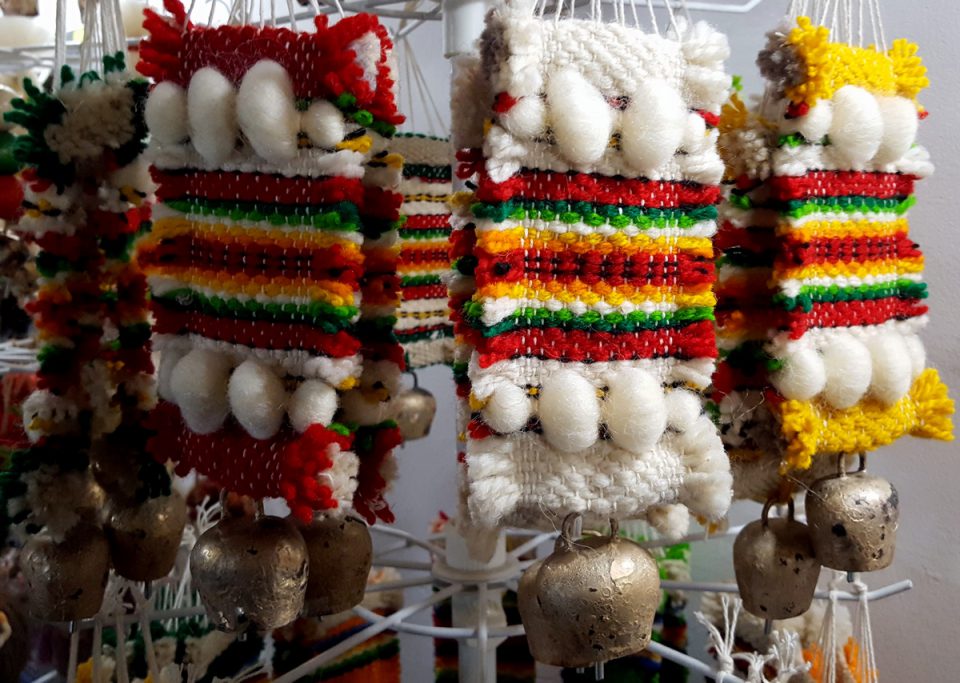 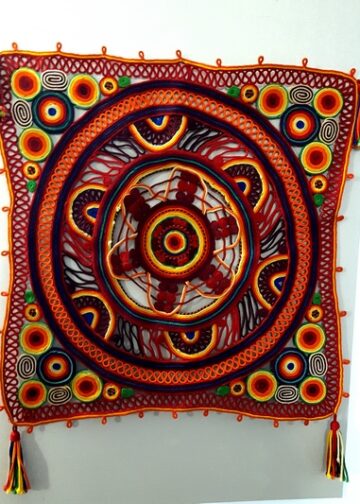 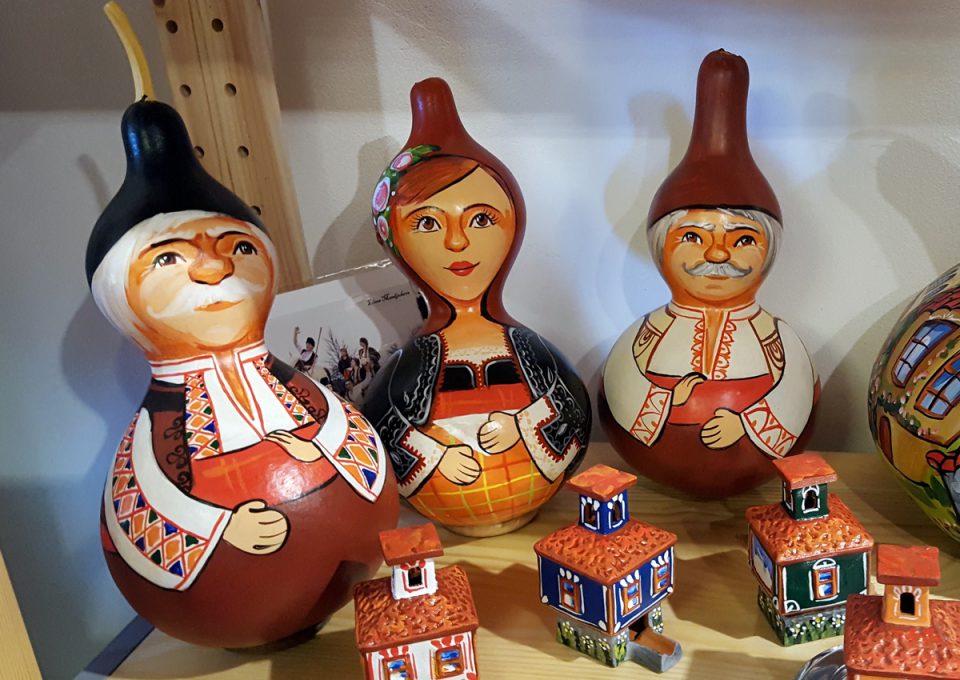 You might be already tired after the long walk. Besides the shops with traditional folk products, there are also antique shops in the Old Town offering not only antiques but also objects from the communist era. You can have a rest in gallery shops, coffee houses or restaurants and enjoy typical Bulgarian food and a gorgeous view in some of them as well. After that, we can continue our walk. Well, we haven‘t visited any churches yet! 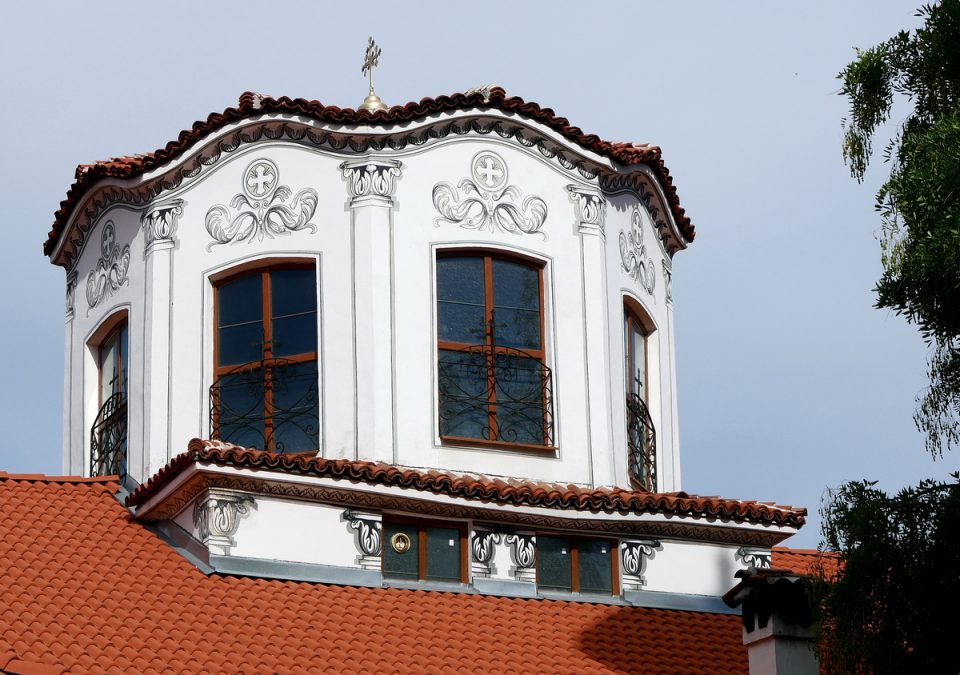 There are several churches in the Old Town. I would choose the Orthodox Church of St Constantine and St Helena, one of the oldest ones in the city. The original sanctuary from the beginning of the 4th century was built on the remains of an ancient pagan temple and was dedicated to Severianus and Memnos who were decapitated here together with other 38 early Christian Plovdiv’s martyrs for their faith. 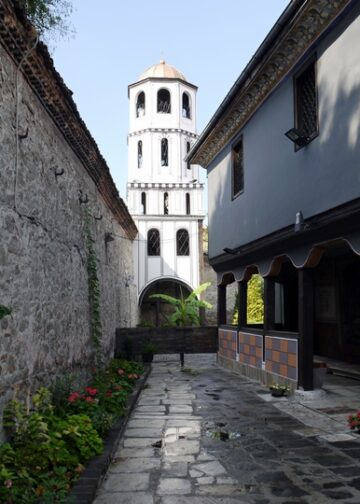 The church was destroyed and rebuilt several times. Its present look is from the 19th century. Every visitor is astonished by the magnificent icons and wall paintings made by the famous painter Zahari Zograf who lived and worked in Plovdiv during the National Revival period. 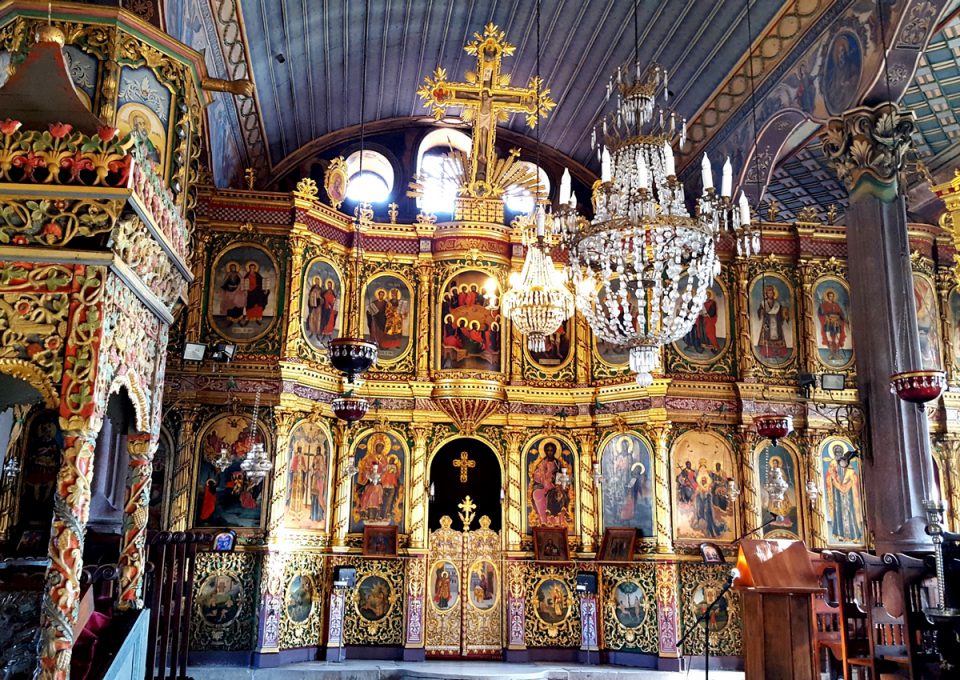 You should reserve at least half a day for the Old Town tour. I wanted to show you the most interesting sights. However, I am still keeping one as a final bonus after the long walk. It is the Roman theatre – a precious pearl that completes the uniqueness of this part of the city. It is possible you have seen it already, but you probably thought it was somewhere else, not in Plovdiv in Bulgaria. This ancient monument was chosen by a German chain of coffee retailers as a place for shooting its advertising shot. 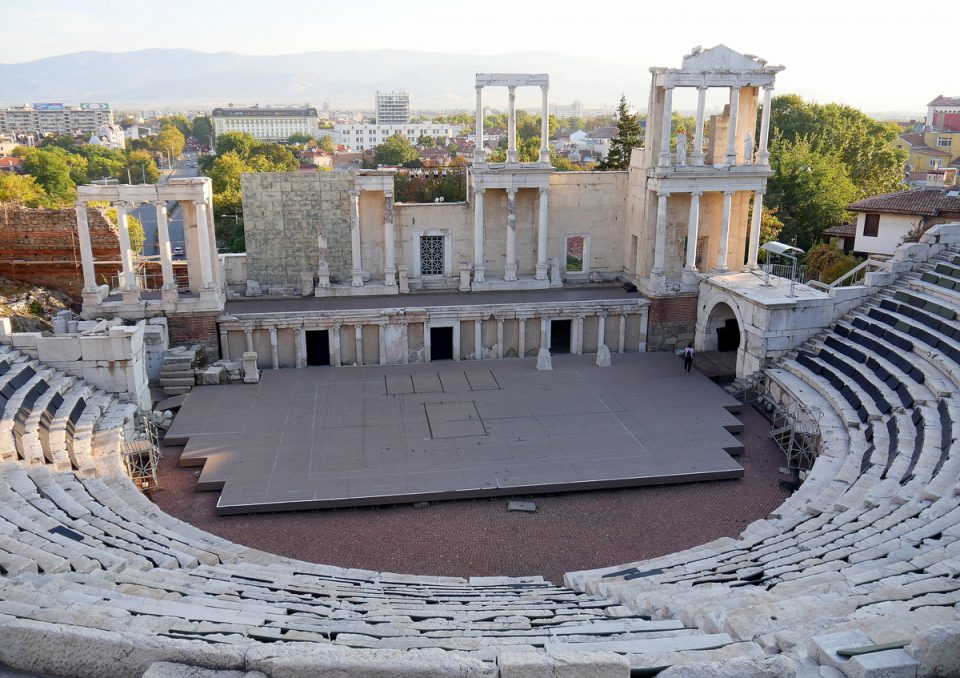 The amphitheater was built in the 90s of the 1st century AD during the reign of Emperor Domitian. It is perfectly adapted to the southern slope of Trimontium so that people could see not only the stage but also the panorama of the city and the Rhodope Mountains. There are 14 rows of marble seats in the low rank and 14 rows in the upper rank (only five of them have remained until today). About 7,000 citizens of the capital of the Province of Thrace of the Roman Empire used to sit here and watch hunting games or gladiatorial combats. The blood of the gladiators who had to fight well or died have been washed off by old rains and their fighting shouts were blown away. Nowadays, the amphitheater belongs to the best-preserved ancient theaters in the world. It can still accommodate about 3,000 people. A classical drama, opera or concert on the stage decorated with original ancient columns, reliefs and statues must be an unforgettable experience.

You can find more information about the Old Town here: visitplovdiv

In the Footsteps of the Ancient Thracians

A Man over the Roofs of the City – Interesting Bits about Vienna 12
Tags: architectureBulgariacity tourcraftscultureOld TownPlovdivsightsstreettips for visittravel
Previous Post 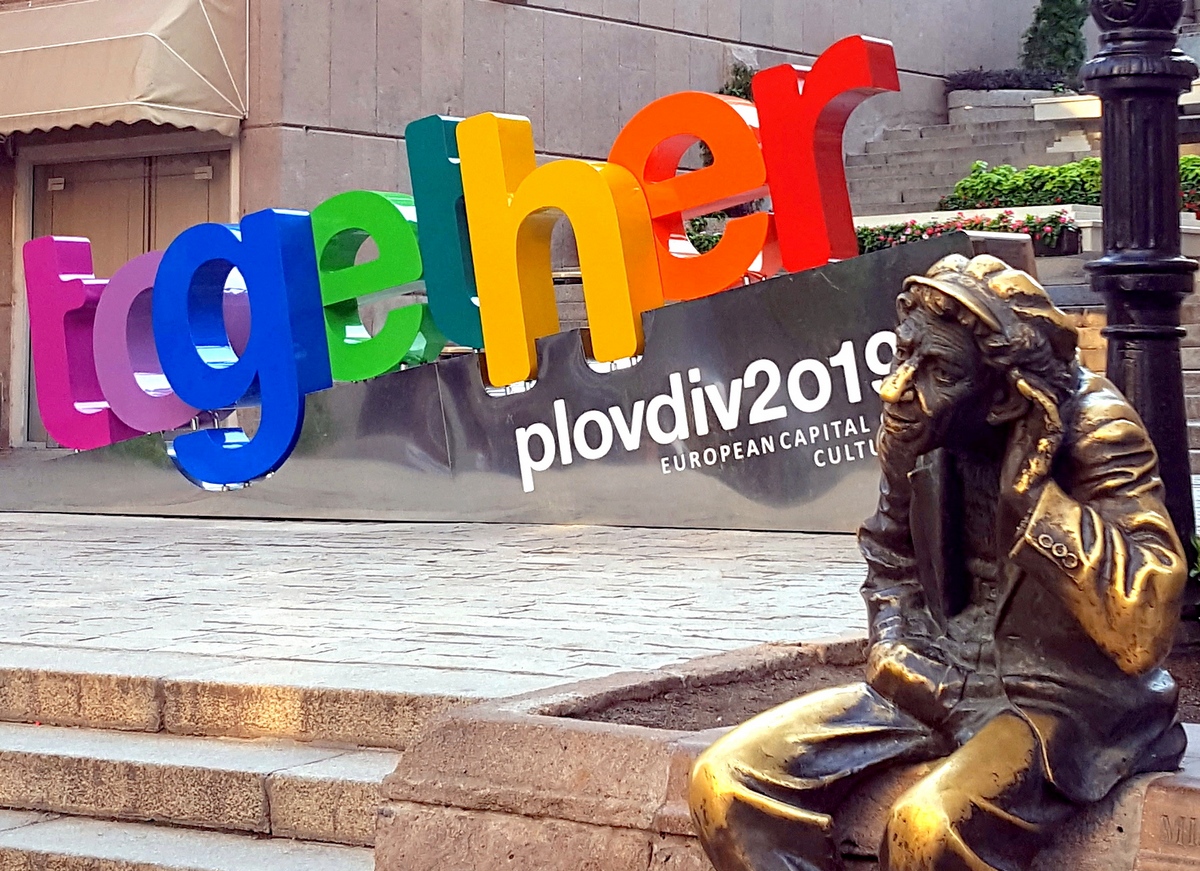 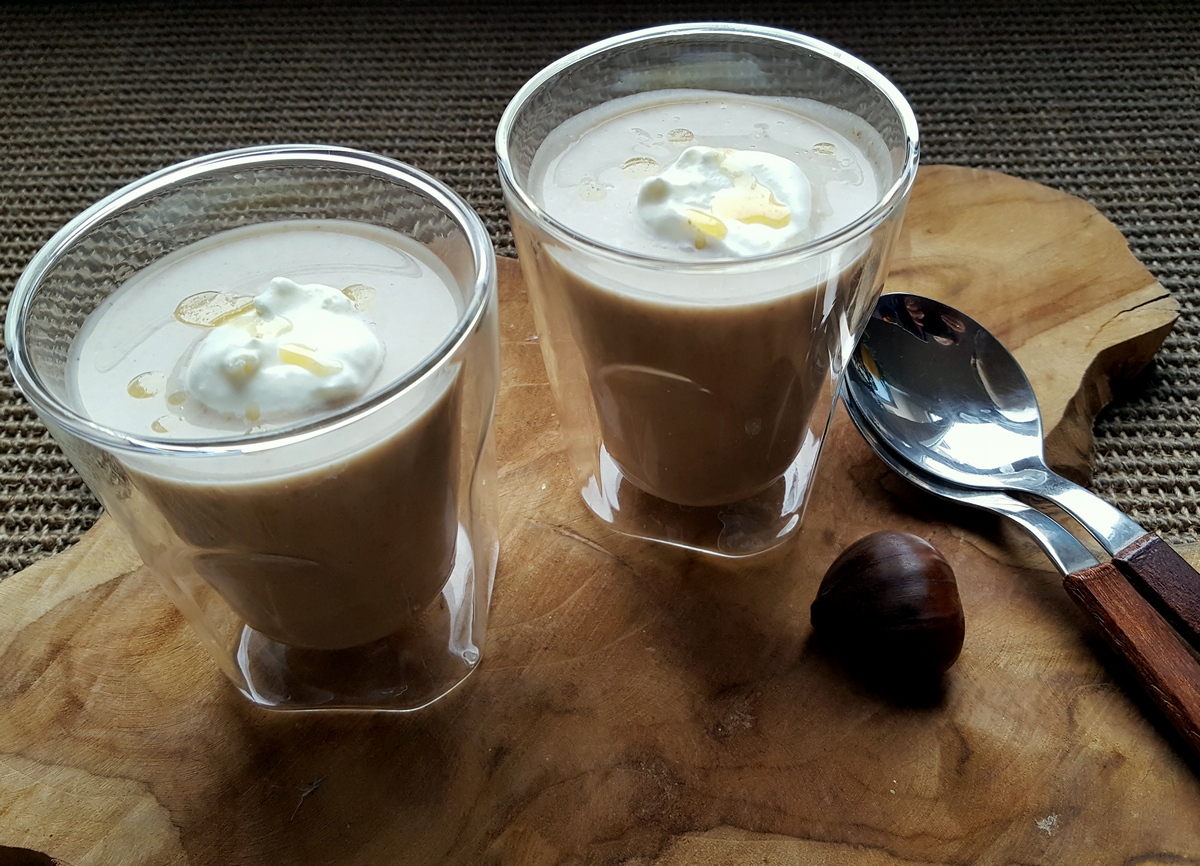