by Ingrid
in RECIPES WITH A STORY, Slovakia, SLOVAKIA-BRATISLAVA
0

Martin, whose day is celebrated on 11th of November, should bring not only the first snow but also a roasted goose on our plates. Why are geese actually associated with Martin?

Martin of Tours was born in 316 on the territory of Savaria (now Hungary). Even his name which comes from Mars, the Roman god of war, predestined him to become a soldier. As the son of a veteran officer, Martin was required to join the army at 15. Three years later, according to the legend, during a dark, freezing night he met a half-naked beggar who was asking him for alms. Martin had mercy on him but because he did not have any money he cut off half of his cloak and offered it to the beggar. Next night, he had an apparition and saw Christ in that half of his cloak which led him to the decision to devote his life to God. Even after he had become a bishop he lived very modestly. St. Martin died in 397 in Candes near Tours.

Well, and where are geese? According to one legend, he was so humble that he did not want to become bishop so that he hid in a barn full of geese, but their cackling gave him away. Another version says that geese were interrupting his preaching so they had to pay for that by being roasted. 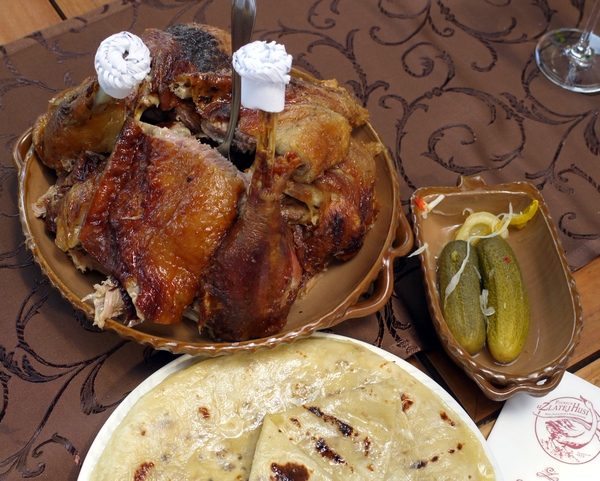 St. Martin is known as a patron of soldiers, horses and riders but also of wine growers and of course, of geese. He is mostly portrayed on horseback dividing his cloak with the beggar. The same way like on this picture from the St. Martin‘s Cathedral in Bratislava. The sculpture was created by Georg Rafael Donner in 1734. 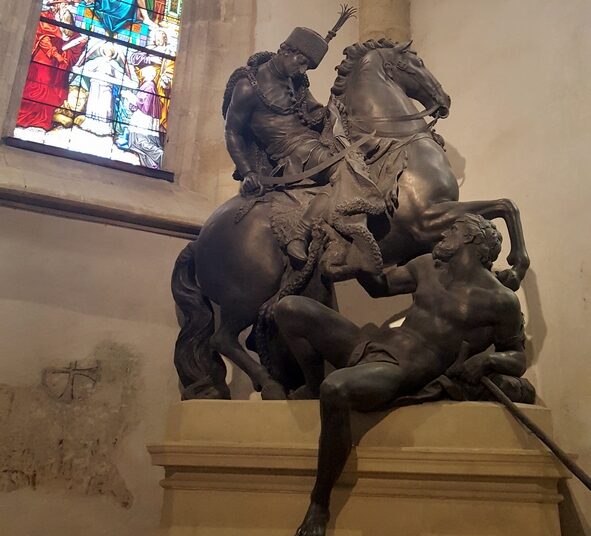 When we came to Austria I was surprised that the children here still participate in paper lantern processions. This tradition is still alive both in cities and villages. Often, a man dressed in a red cloak rides on a white horse in front of the procession. The children sing songs about St. Martin and about their lanterns.

Whether as an honour or a punishment, in Slovakia, Austria and some other countries, people should eat a roasted goose on the 11th of November – St. Martin‘s day. In Slovakia, it is mostly served with cabbage and potatoes pancakes which are called “lokshe”. 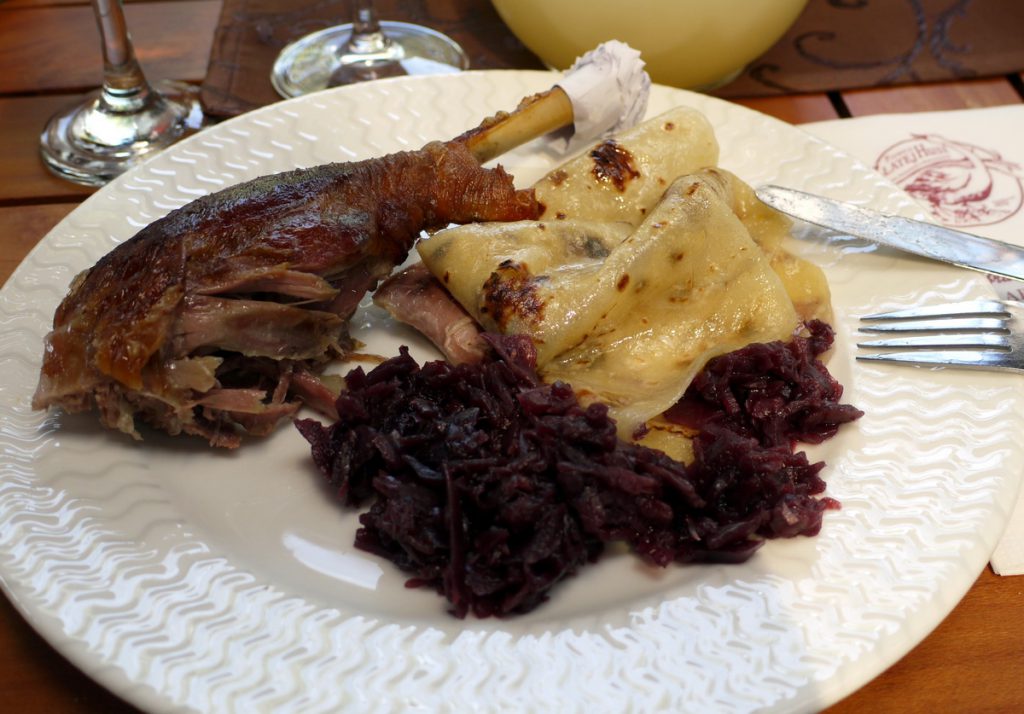 Cut the wings off (you can use the cut parts and offal for a soup). Sprinkle the goose with salt on the inside and outside. Then sprinkle the goose cavities with marjoram and put the apple inside. Place the goose breast side up on a roasting pan and without adding water (or just minimal water) roast the bird at 180 °C. After half an hour, when fat is released, turn the goose upside down. Sprinkle it with grill seasoning and continue to roast basting the bird with fat juice. Turn the goose at least two times more. Roast the goose for at least 3 hours (some say you should calculate 1 hour for every one kilo of the bird). Ten minutes before finishing the baking take away the fat. Drizzle the goose with honey or milk to get a nice crunchy skin. The roasting is finished when the skin starts to crack.

Grate the cabbage and salt it. Dice the onion. Melt fat in a pot, add sugar and let it caramelize. Add onion, mix it well, then add cabbage, caraway and salt. Add some water. Simmer first uncovered, then cover with a lid and simmer until cabbage is tender – ca 40 – 50 minutes.

Peel potatoes and boil them (you can boil also unpeeled potatoes), let them cool down and then crush them. Add salt, flour, baking powder and lard and work it into a soft dough. Divide the dough into 4 pieces. From each of them cut about 10 slices. Work quickly because the dough becomes softer. Roll every slice into a thin flat cake on a surface sprinkled with flour. Bake the pancakes on a dry, ungreased frying pan from both sides. If the rest of the flour is burning on the pan, wipe it off with a dry kitchen paper napkin. Grease baked pancakes gently with lard on one side. 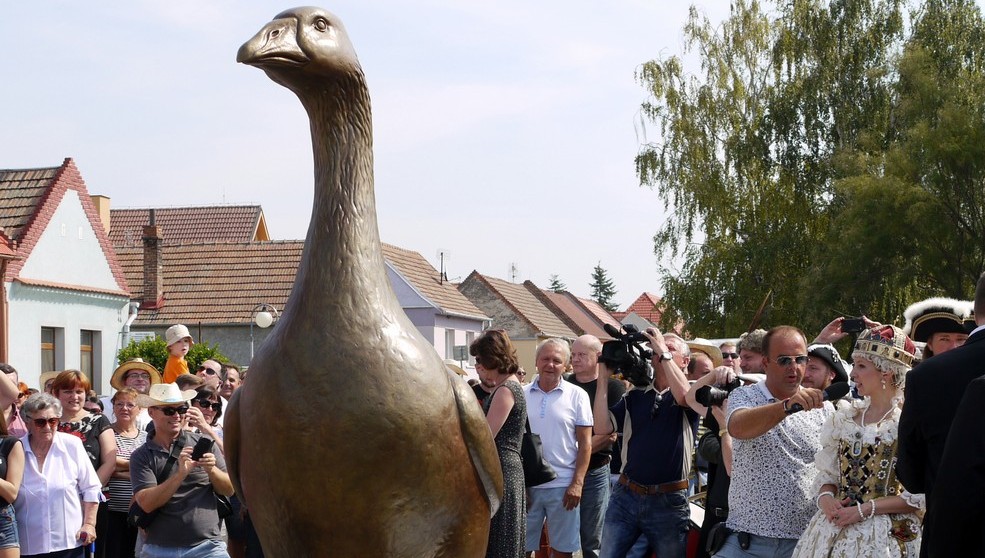 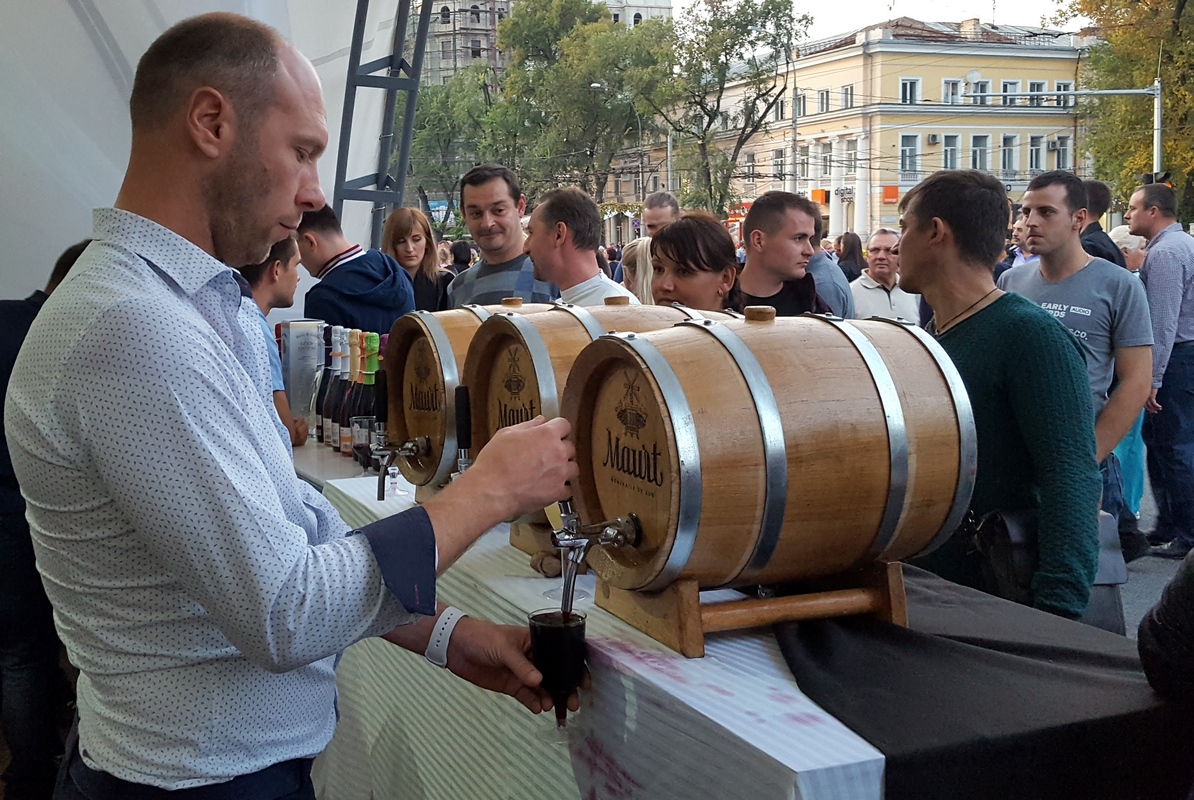