In the 14th century, the Ottomans came to Europe, and when they conquered Constantinople in 1453, they also ended the existence of the Byzantine Empire. In 1529, after the battle of Mohács in which the Hungarian King Louis II had died, they also wanted to seize Vienna. The siege was unsuccessful, the Ottomans, however, did not give up on their desire to conquer the city and break the power of the Habsburgs. The second attempt took place in 1683. Despite the huge predominance (almost 20:1), the Ottoman army with almost 138 thousand men and 300 cannons under the command of Grand Vizier Kara Mustafa did again not decide for a general attack, but for a siege. Their intention was to starve Vienna and thus achieve surrender without a fight. After two months, the situation in Vienna had become almost desperate, but John III Sobieski, King of Poland, arrived with his army to help. The decisive Battle of Vienna took place on September 12 at Kahlenberg and heralded the end of the Ottoman expansion into Central Europe. 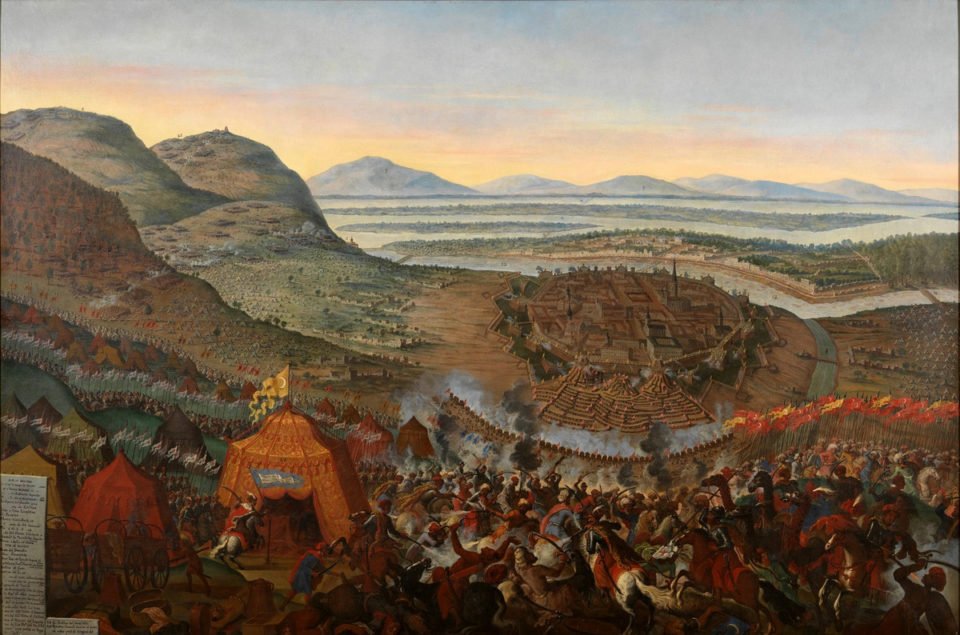 These historical events are depicted in several paintings in Vienna’s museums and galleries. When new buildings were built or renovated after World War II, it was popular to decorate their facades with various mosaics. On two houses in the city, you can find mosaics reminiscent of the mentioned Battle of Vienna.

(1) The mosaic in mauve and blue tones was created by Austrian painter Karl Drexler in 1963. It can be found in Vienna’s 8th district – Strozzigasse 12 (subway stop U3 Neubaugasse). 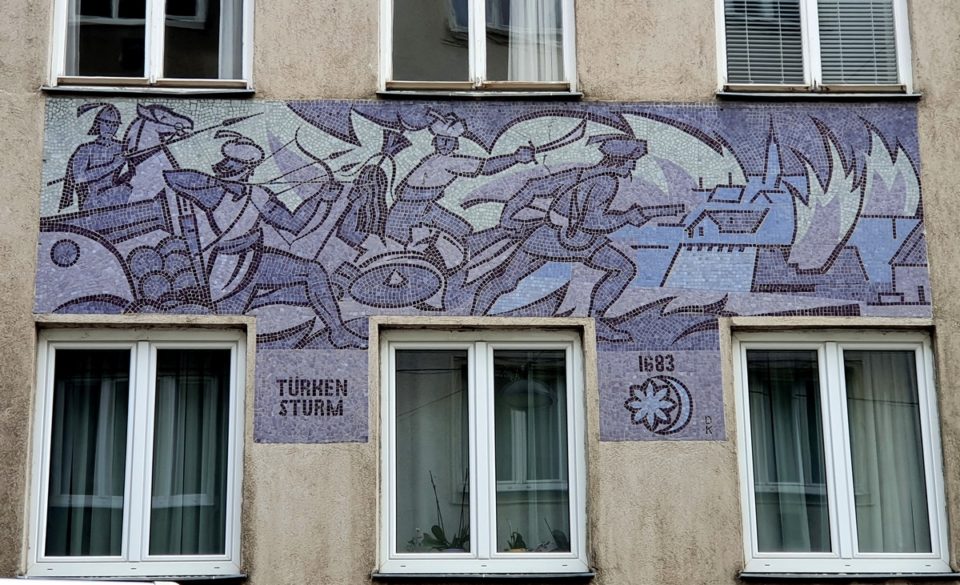 (2) Nearby, at a maximum of 10 minutes’ walk, is the second mosaic from 1955 – Neustiftgasse 43 (7th district). The German-Austrian painter and graphic artist Walter Behrens depicted Ottoman tents in the suburbs of Vienna and in the background, the burning city with St Stephen’s Cathedral. The Ottoman army was stationed around Vienna in 20,000 tents. The largest one on the mosaic is the tent of the Grand Vizier. By the way, the crushing defeat cost Kara Mustafa all his ranks and his life as well. At the order of the Sultan, he was executed by strangulation with a silk cord. 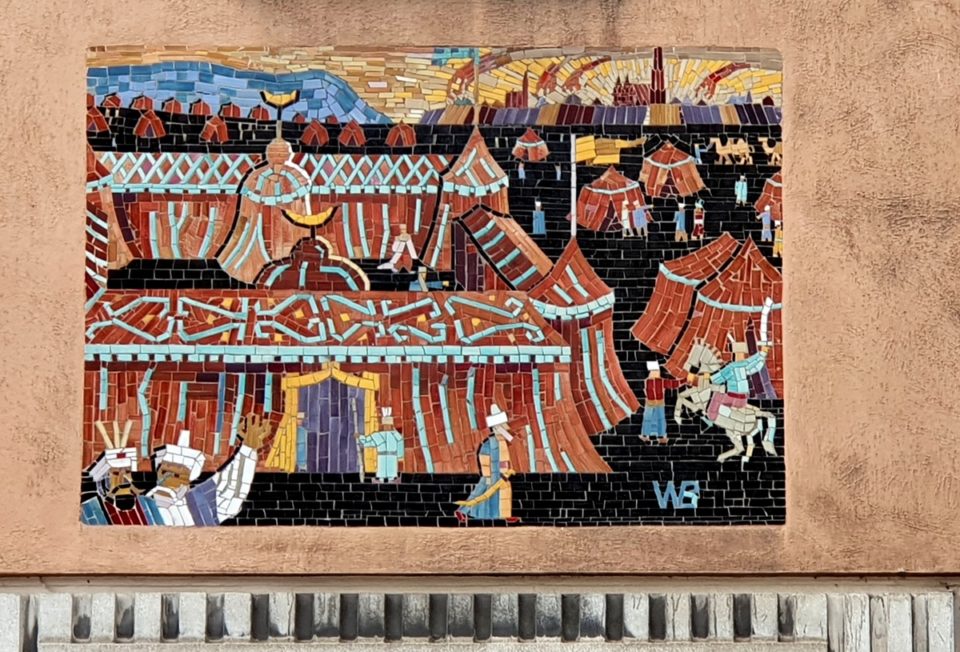 (3) A reminder of ancient history is also the statue of a Turkish rider with a curved saber in his hand – in the city center, on the house on Straugasse 1 (subway stop U3 Herrengasse). 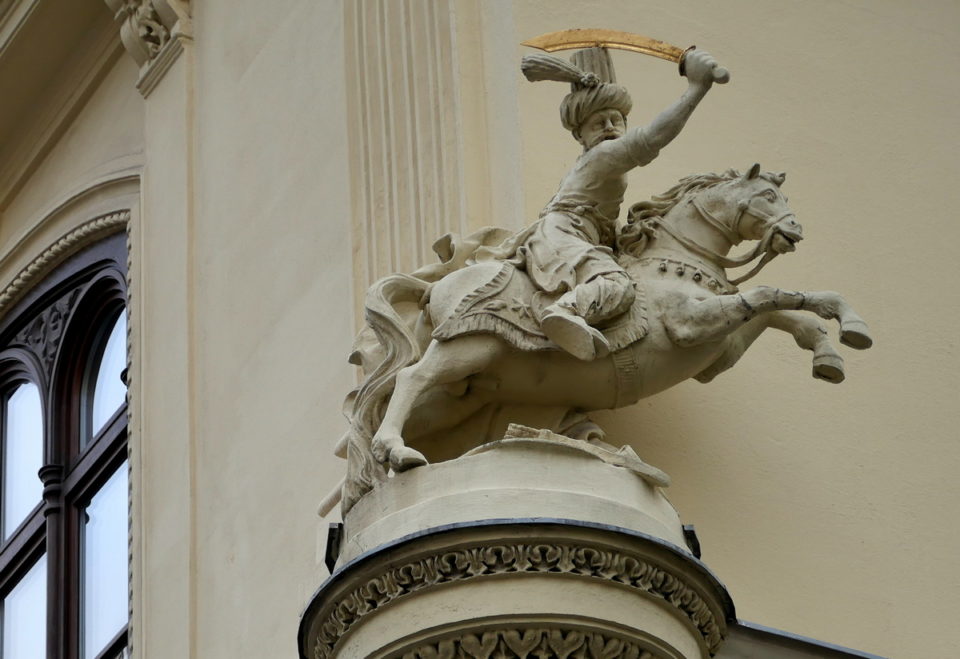 Stone balls from Ottoman cannons can be found in several places in Vienna as well.

(4) In 1963, three such balls were discovered during renovation work at the Greek restaurant Griechenbeisl – Fleischmarkt 11 / Griechengasse 9. It is not entirely clear whether they are from the first or second siege. The building was once part of the city walls, and therefore very often shelled. The balls are presented on a board at the entrance to the restaurant. 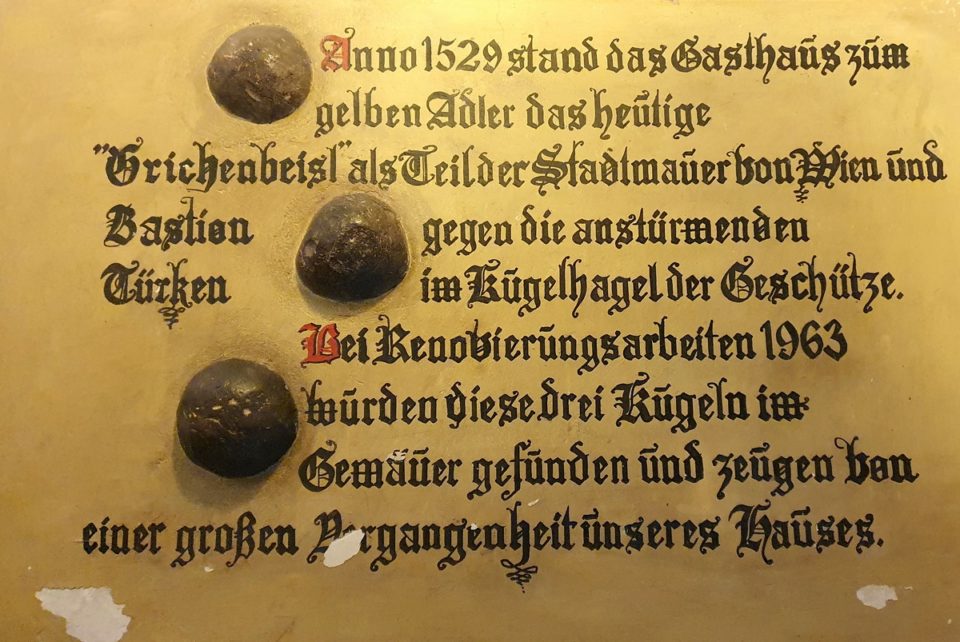 (5) At another address – Am Hof ​​11 – a gilded ball hangs on the house. During the fighting in 1683, it allegedly hit one of the five smaller houses that stood here at that time. It was an inn, its owner Michael Motz let gild the ball and after that, he renamed his inn “At the Golden Ball”. The pub was said to be very popular. 200 years later, the old house was demolished and a five-story palace was built in its place. The golden ball has remained until today… 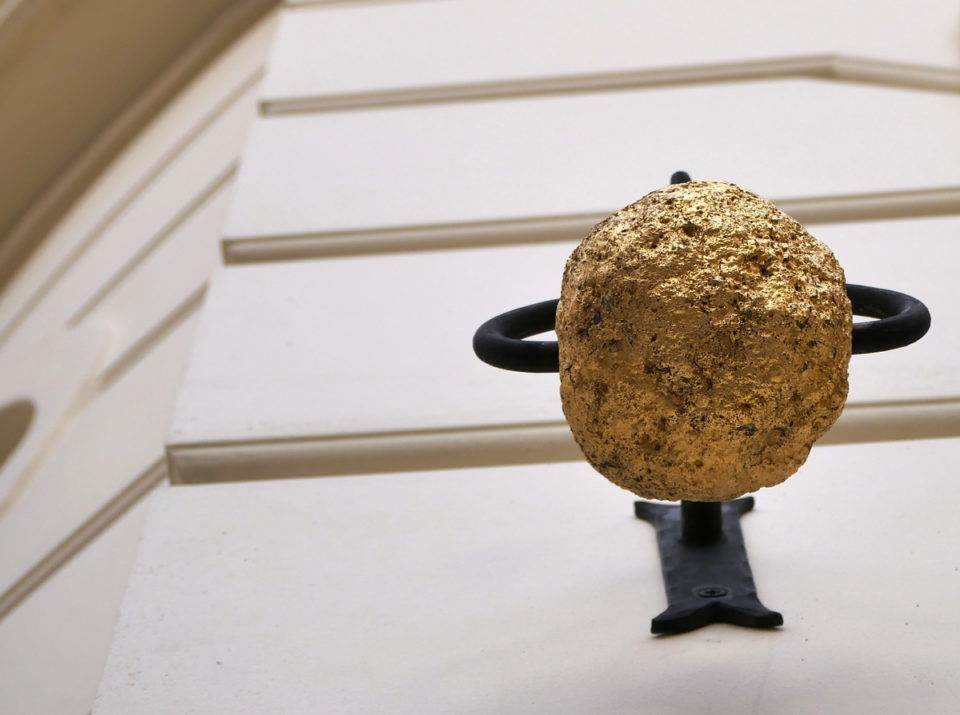 If you ever go there, you should also take a good look at the neighbouring building. On its roof, you will see four flags, three have their poles embellished with an arrow, while one pole has an Ottoman crescent. Three flags are unrolled, the fourth is rolled up, which symbolically shows that the Ottomans failed to conquer Vienna. 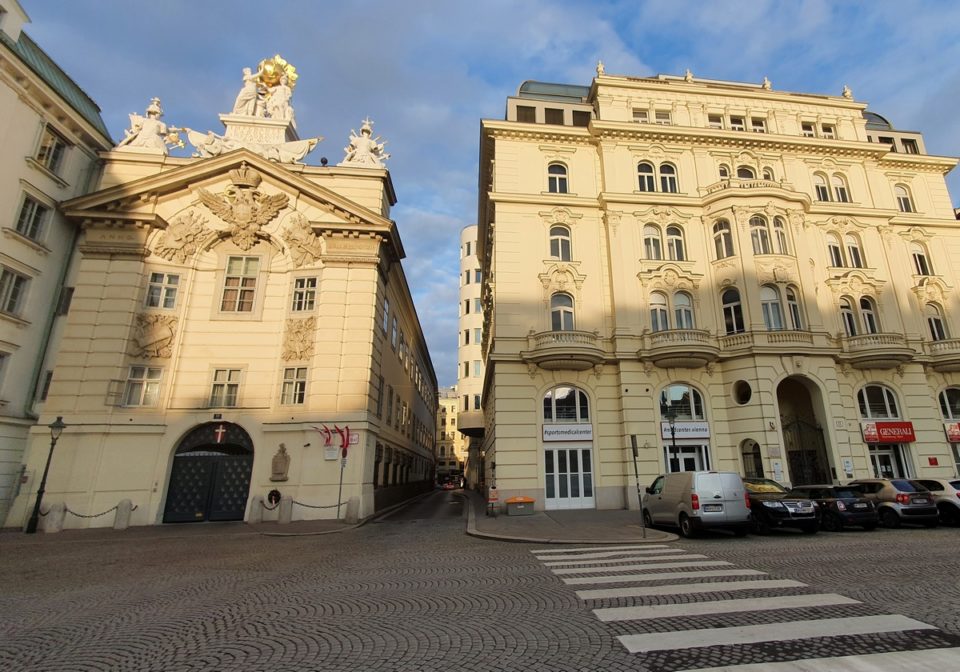 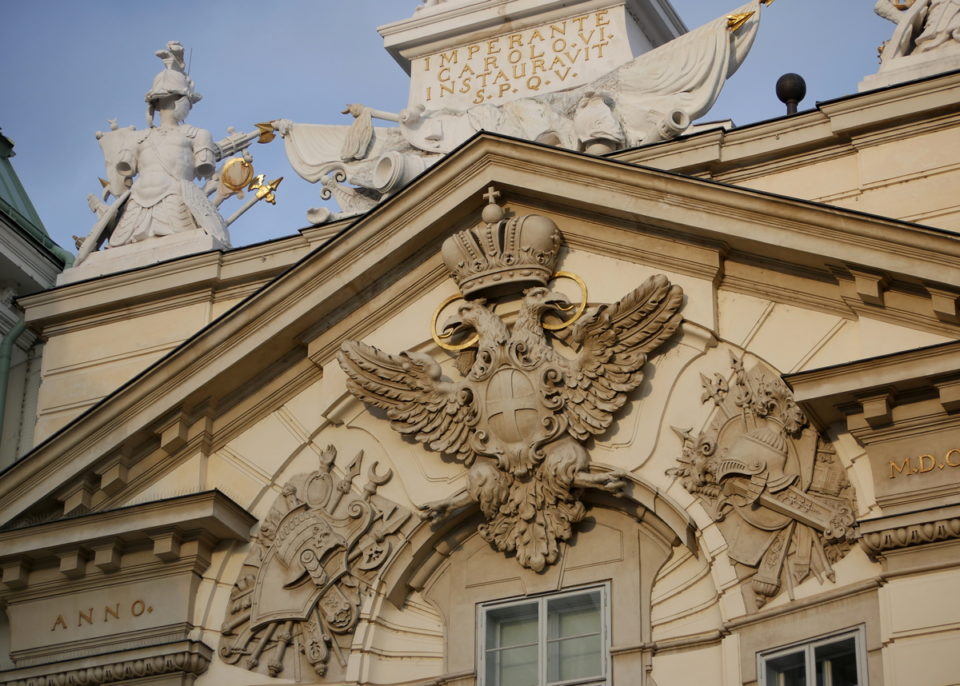 (6) On the façade of Vienna’s New City Court – Sterngasse 3 – there is another memory of Turkish artillery. The 40-kg-stone was shot at the city from a mortar on July 20, 1683. It is not only one of the heaviest “souvenirs”, but also one of the few authentic originals. 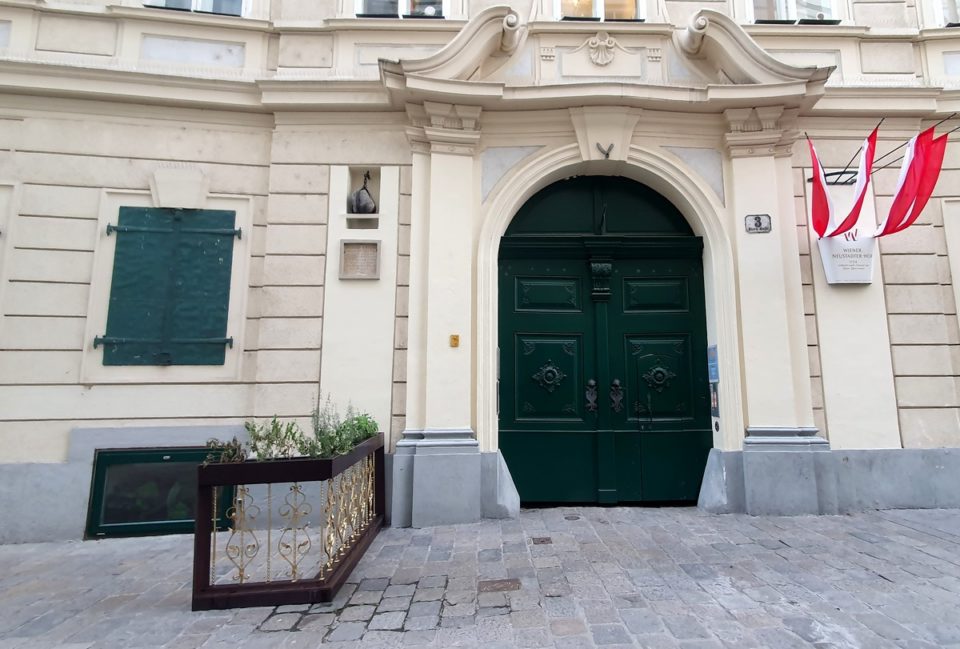 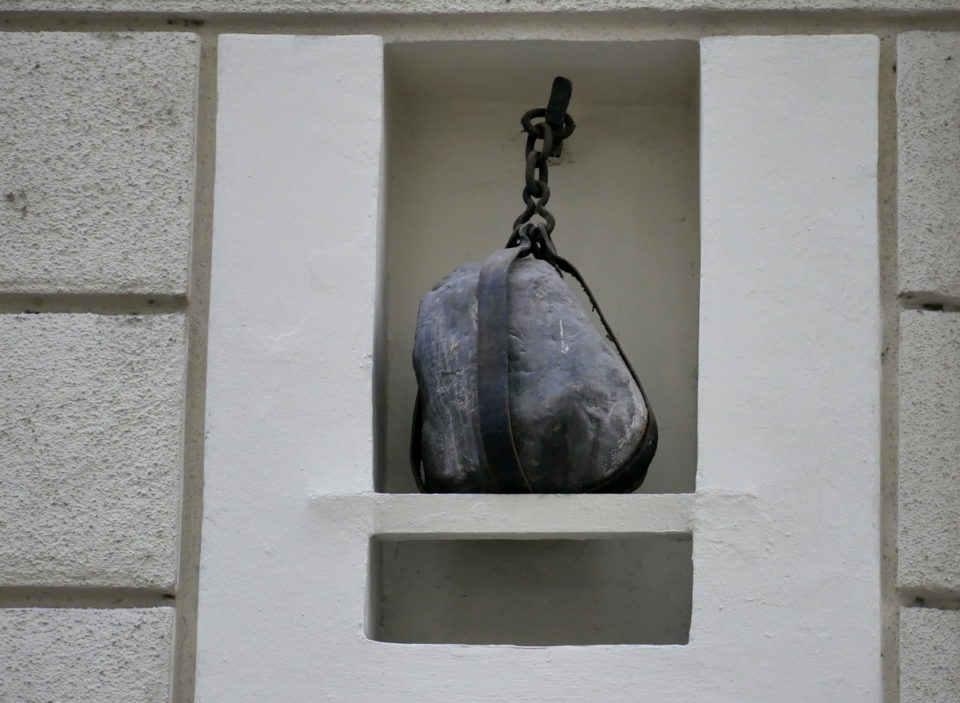 (7) You will discover another stone ball if you look very closely at the south tower of St Stephen’s Cathedral. The year 1683 is engraved there as well. The Viennese landmark was hit by more than 1000 stone balls during the second Ottoman siege. One ball was used to make a head of a Turk from it, which is located near the stone ball on the facade. Originally, there was also a derogatory inscription under it, but in August 2018, it was removed as politically incorrect. 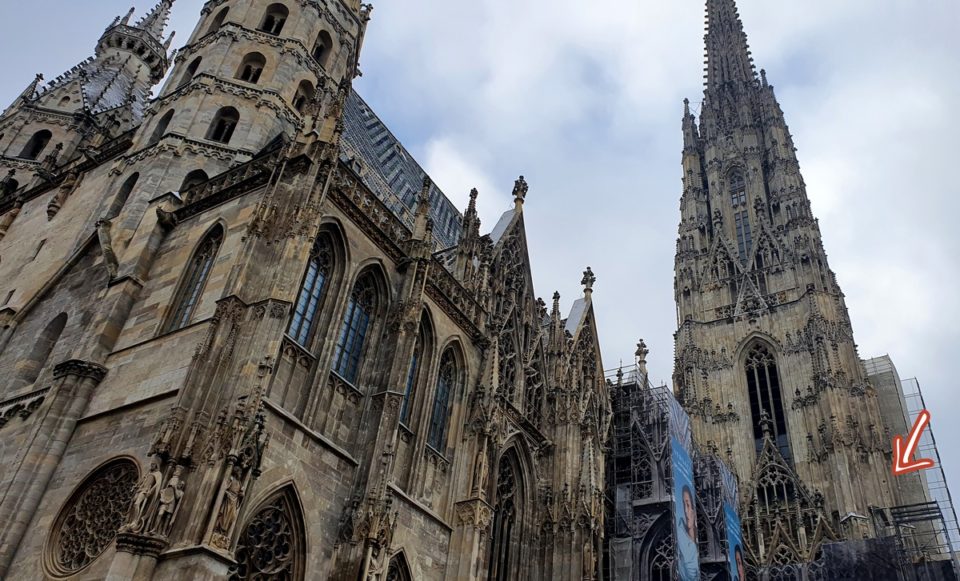 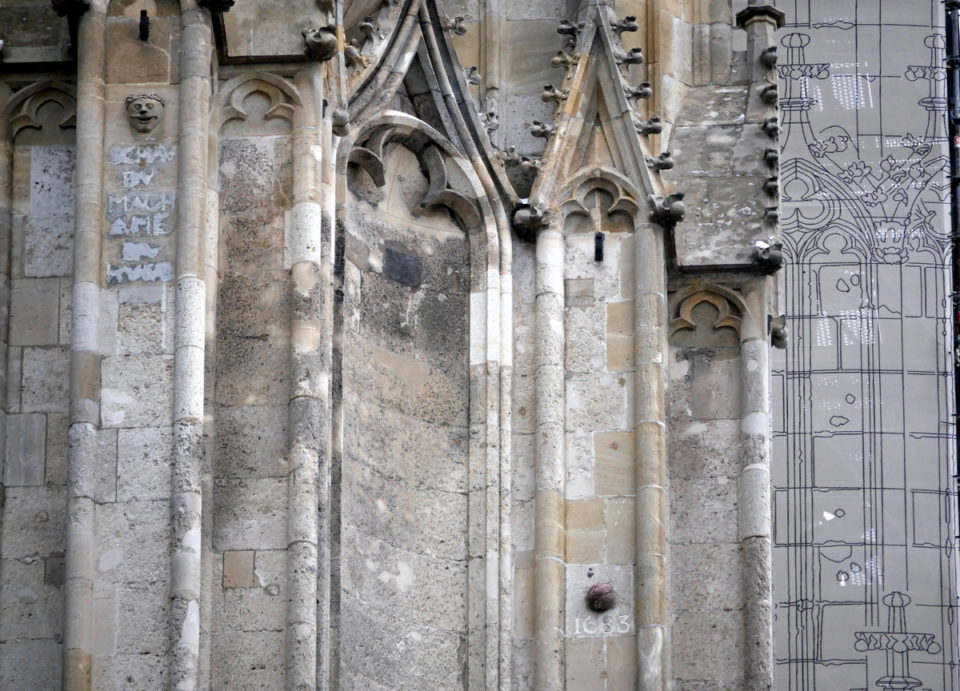 And by the way, the famous Pummerin Bell of the Cathedral – the second-largest free-hanging bell in Europe – was cast in 1711 from 180 cannons left by the Ottomans after the failed battle. The bell weighed over 18 tons. At the end of World War II, when the roof of the Cathedral took fire from the surrounding houses, the bell fell down and shattered. It was then re-cast from its fragments.

(8) The Minoritenkirche Church was less fortunate. One such cannon shot down its tower during the first siege. The tower was rebuilt, but it also fell victim to Ottoman artillery during the second siege. The Viennese then only levelled it, and since then, they call it “the Church with the Blasted Tower”. 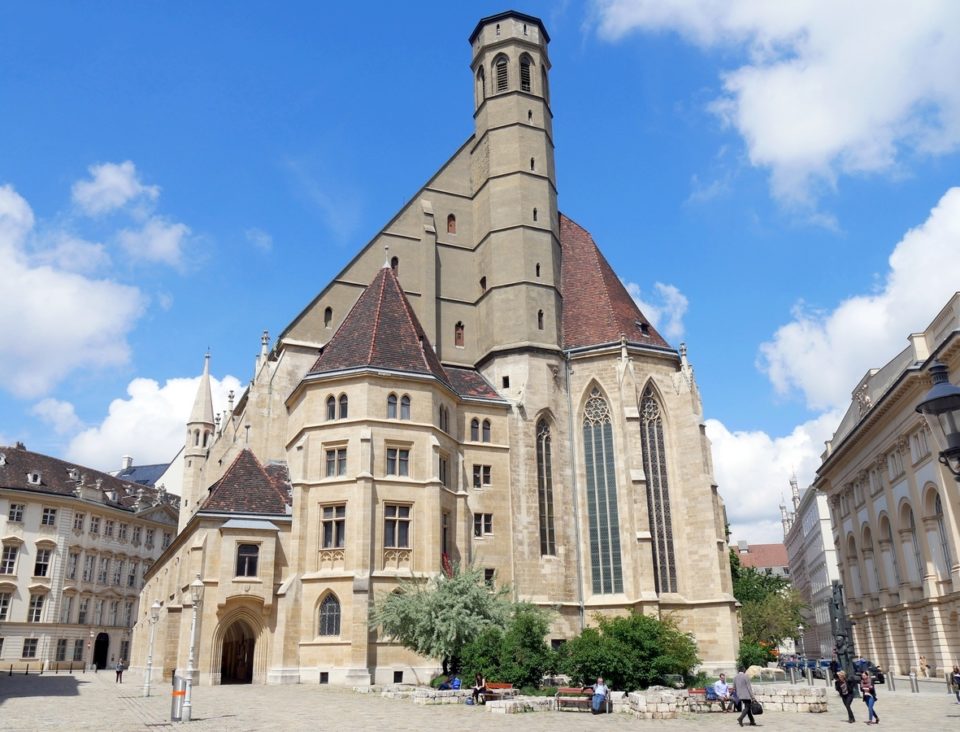 (9) Another ball, although just an imitation, is located at Landstrasser Hauptstrasse 40 (3rd district, subway stop U3 Rochusgasse) on a marble slab which was unveiled in 1983 when Vienna commemorated 300 years since the second siege when the house standing here at the time had also been destroyed. 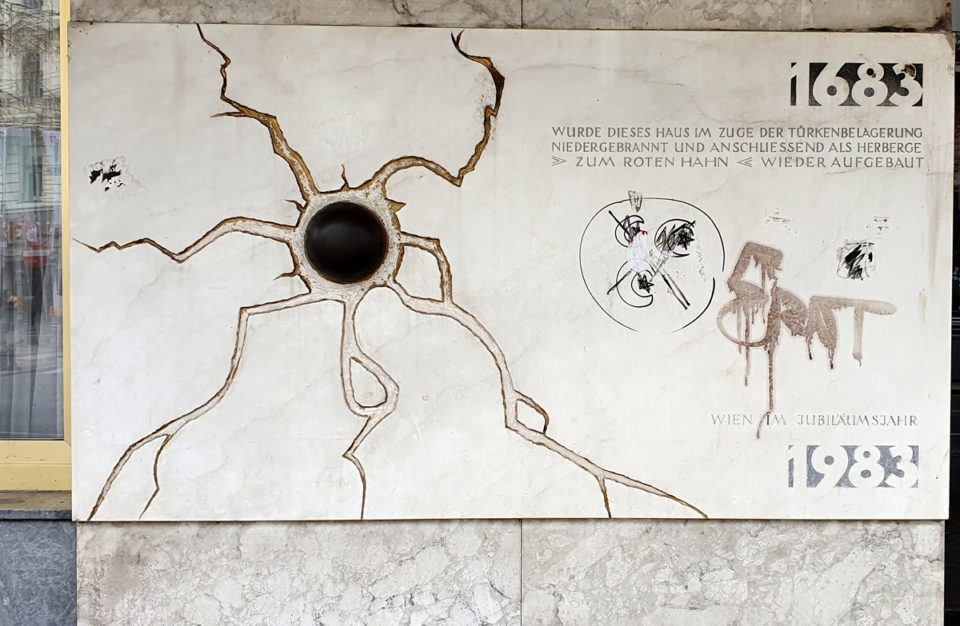 (10) Other stone witnesses to the tumultuous history are located outside the city center. One ball can be found at the corner of Linke Wienzeile 172 and Morizgasse 2 in the 6th district (subway stop U4 Margaretengürtel). The house was built in 1969 when the ball was placed here. However, after about 20 years, someone stole it. So an imitation was made, but it was stolen as well. For a while, the niche remained empty. When the European Football Championships took place in Vienna in 2008, a new idea was born – instead of a war relic, a replica of an official football was placed in the niche – in accordance with the motto: Better good games than bad wars. I do not know how long the ball remained there. At present (November 2020), there is another imitation of a stone ball. 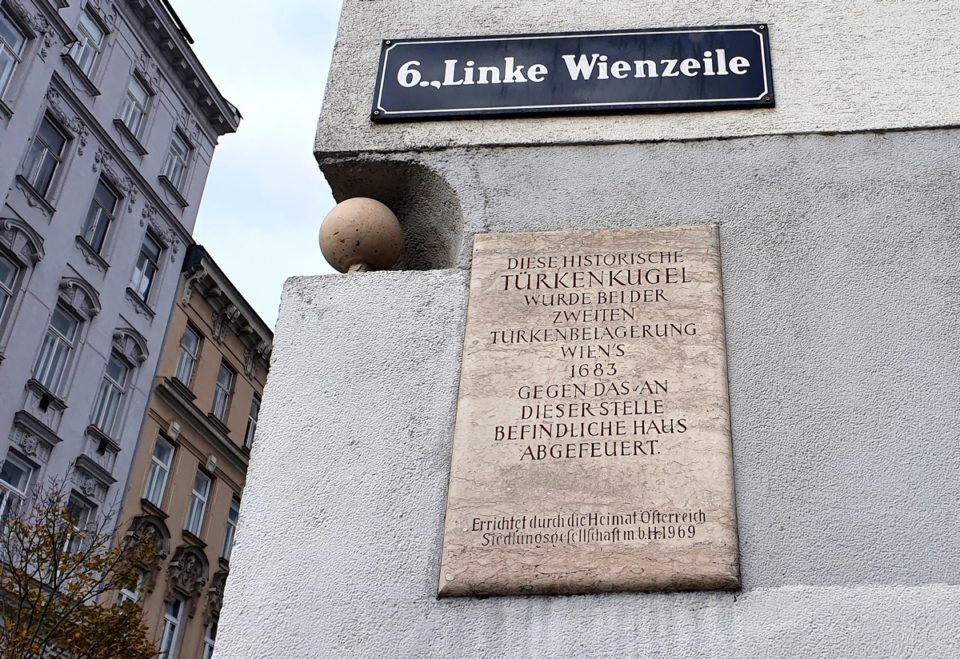 On the wall of the house on the side of Morizgasse street, there is also a relief with a Turkish gunner by Salzburg sculptor Alois Lidauer. The cannon is positioned so that the ball in the niche is in the trajectory of the projectile. 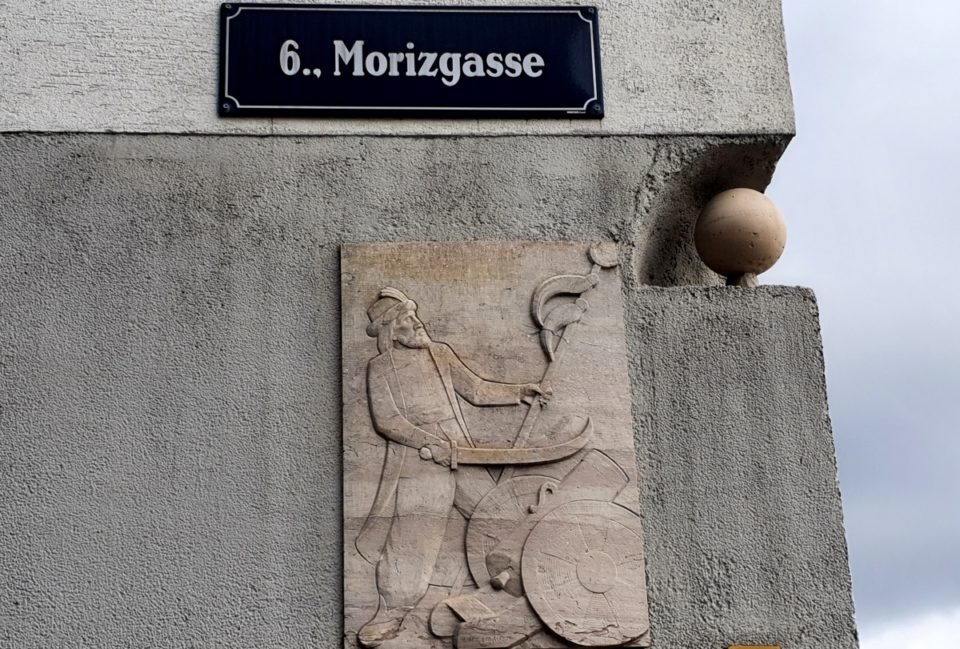 (11) The last stop on my journey looking for the round relics of the Turkish siege was the house at Sieveringer Hauptstrasse 99 in the 19th district (subway last stop U4 Heiligenstadt and bus 39A – Börnergasse). Right next to the sidewalk, stuck to the stone wall of the house, there are three large stone balls in different shades of gray. Their diameter is up to 40 cm. 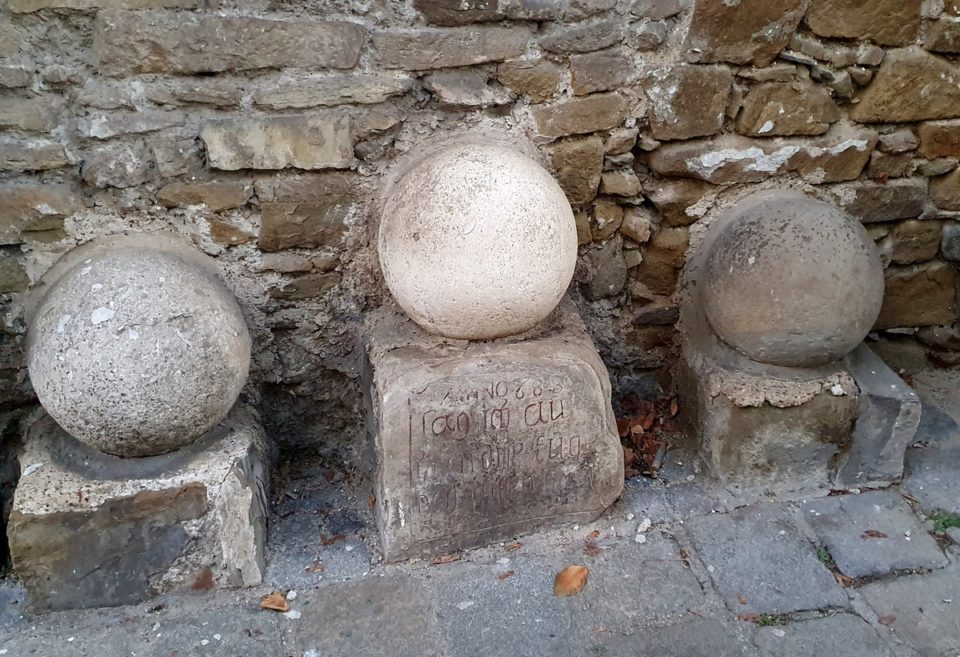 How to get to these sights?

The easiest way is to find a public transport connection at: www.vor.at

If you are in the historic city center, you can visit the objects 3-8 on foot.

The history of more than 300 years ago is not only remembered through paintings, mosaics, stone sculptures and other similar objects. After all, even coffee came to Vienna with the Turks! But you can read about it in another article on the blog: The Viennese tradition in a cup of coffee 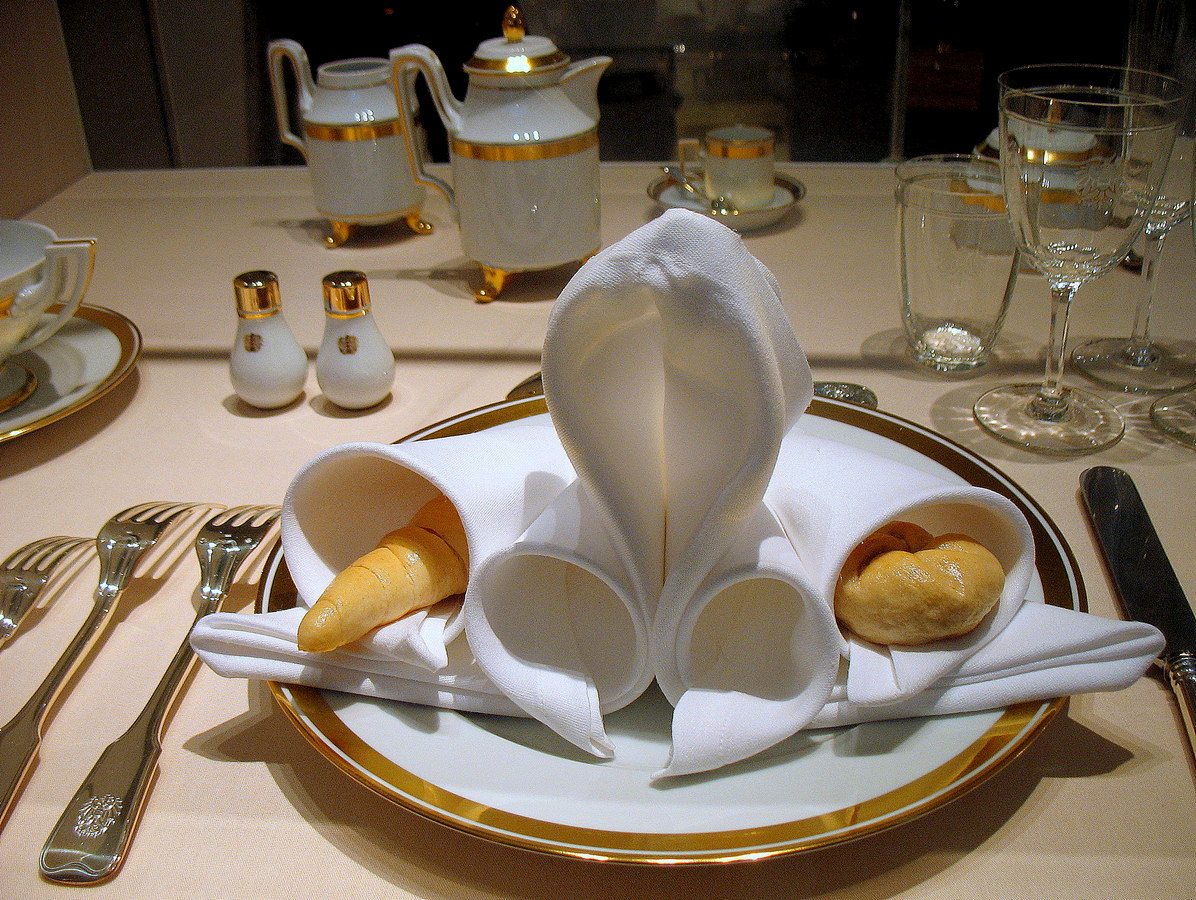 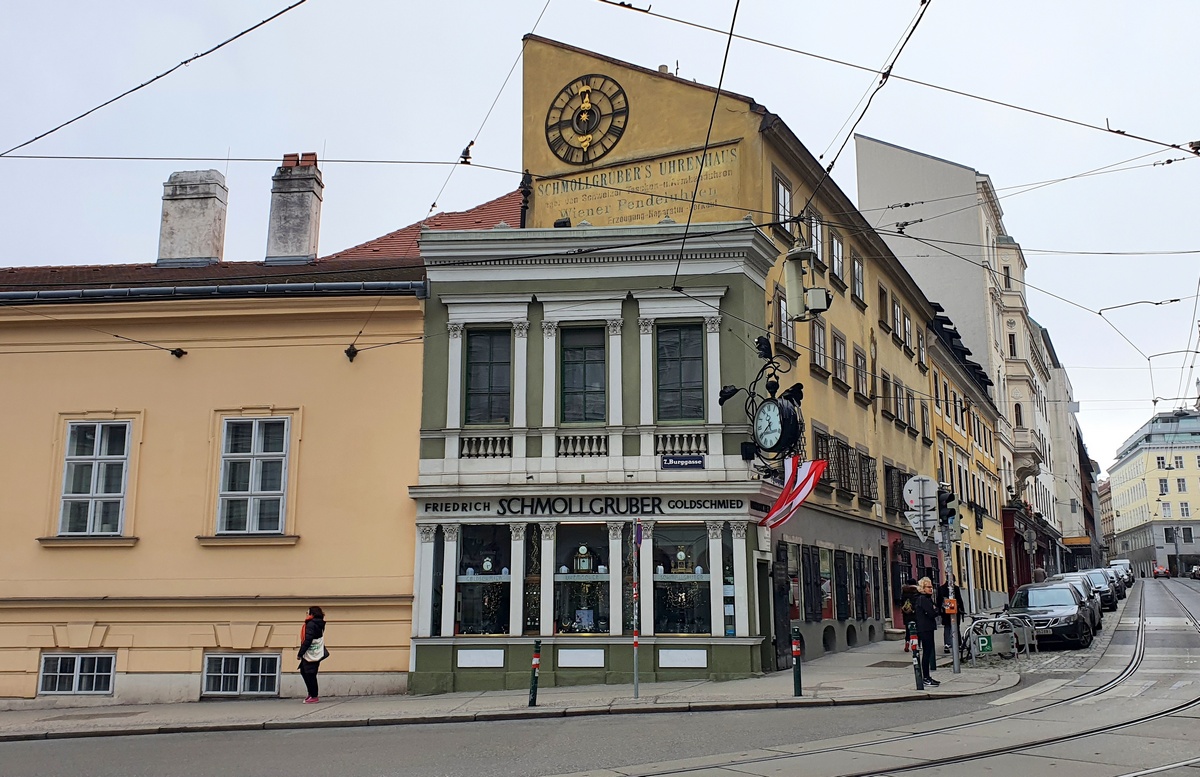