The third cave I visited was without tourists, but also very interesting. And I have to say that just getting to it was an adventure.

At first, we stopped at an orange house with a red roof, which stood out well in the green valley surrounded by limestone mountains. It was the Rio Corvera Queserie, where traditional blue cheese is made – mainly from cow’s milk. We were greeted by Jaime, the owner. The cheese had been already produced by his father-in-law, Jaime started only in 2019. The start was successful, even his father-in-law praised his products. But then the corona came, the cheese could not be delivered to the shops because they were closed, Jaime had to drive the cheese from house to house. Even now, the situation is not easy, but fortunately, the interest in the tasty product persists. 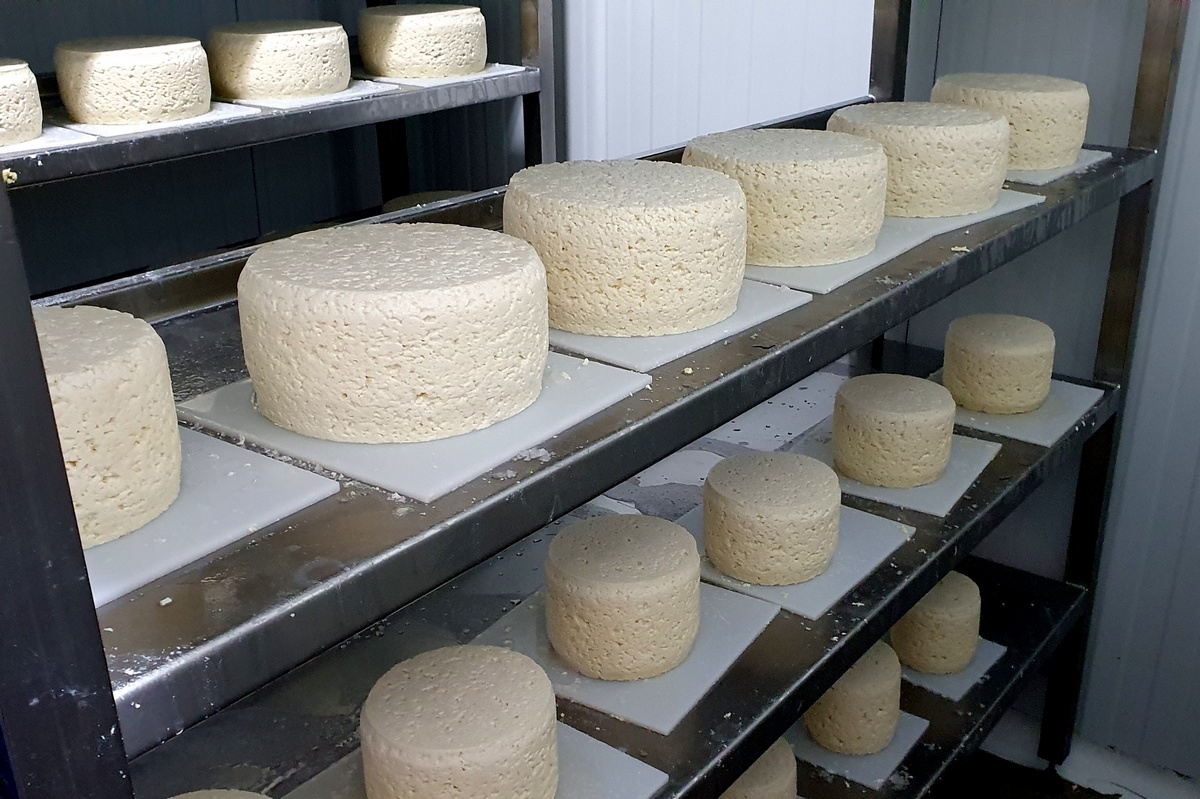 We looked in the first room, where the cheese was dried for 15 days. Half-kilo and two-kilo loaves of cheese were neatly placed on the shelves in the second room as well. They’ll stay here for two weeks too. The cheese was still snow-white and has to be turned every day with a top-down motion.

Jaime carved a small triangle in one loaf. A blue tint began to shine through the opening. The time has come for the cheese to move from here to the cave. 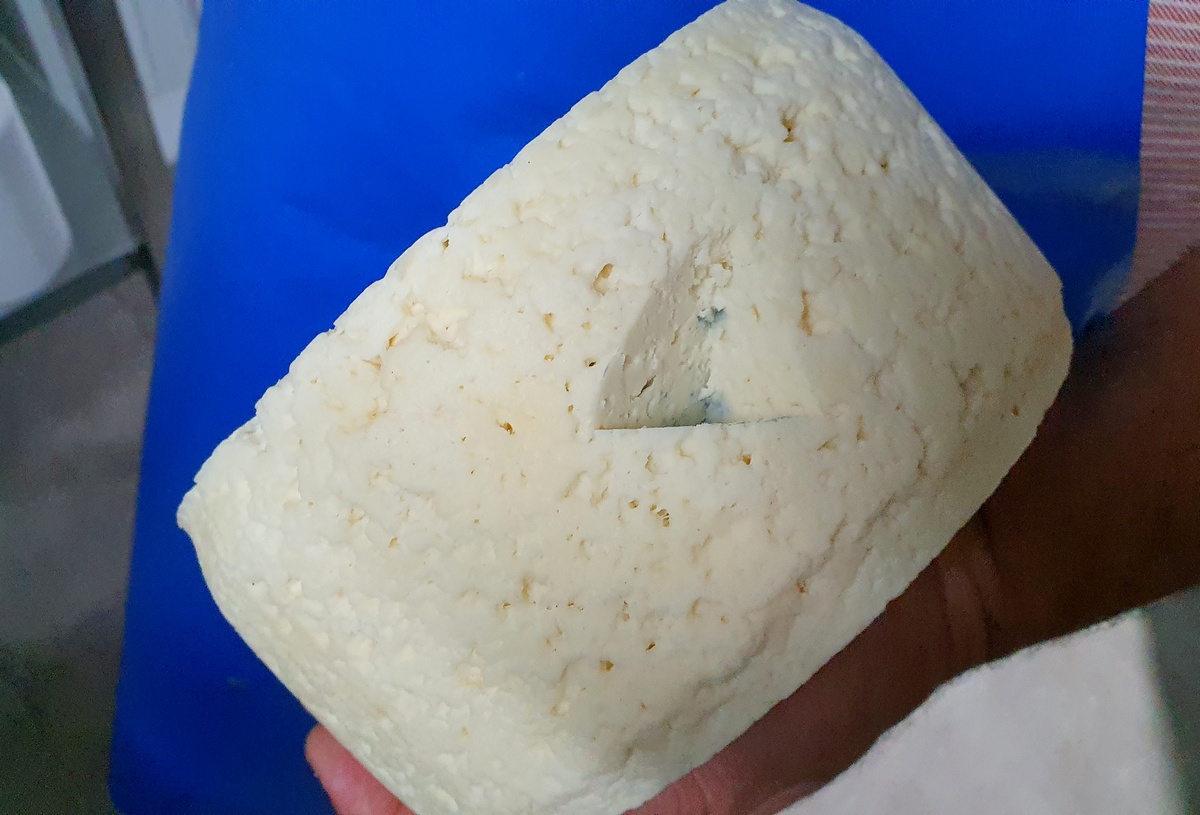 We got in the car and drove the narrow switchbacks to the top of one of the surrounding hills. The road was partially unpaved, with wooden stakes on some places but in some parts, there was no protection, just a steep slope. The curves were so sharp that sometimes we had to stop, back up a bit and only then continue around the bend. 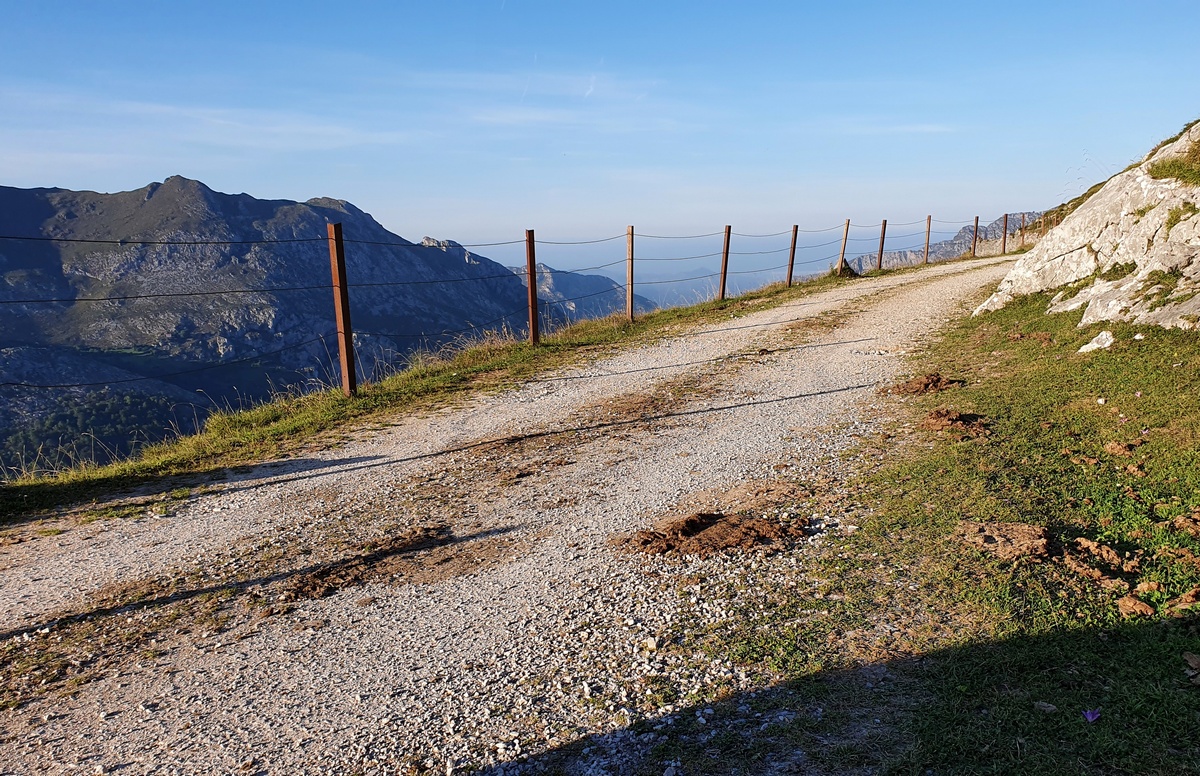 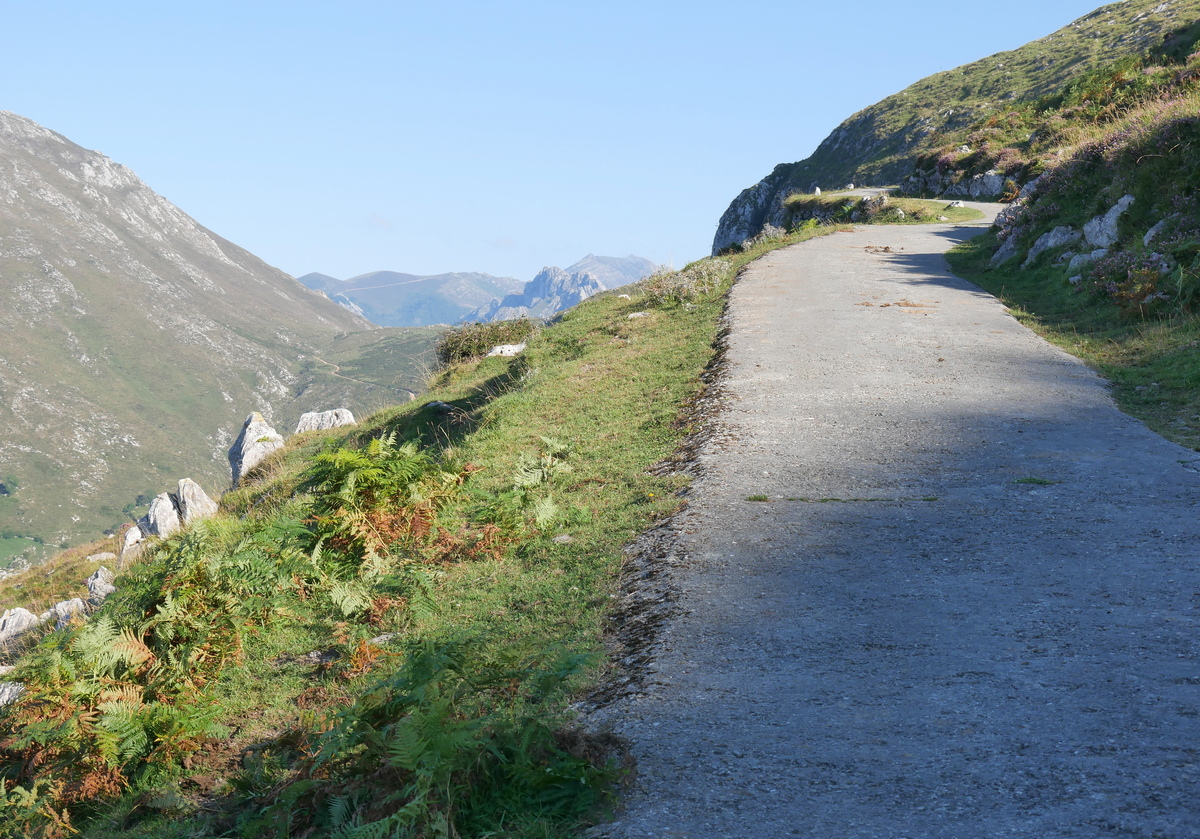 I wasn’t afraid, I trusted Jaime. I knew he’s driven this road countless times. When the cheese is in the cave, it should be turned once a week. With each switchback, the villages scattered in the valley became smaller and smaller. 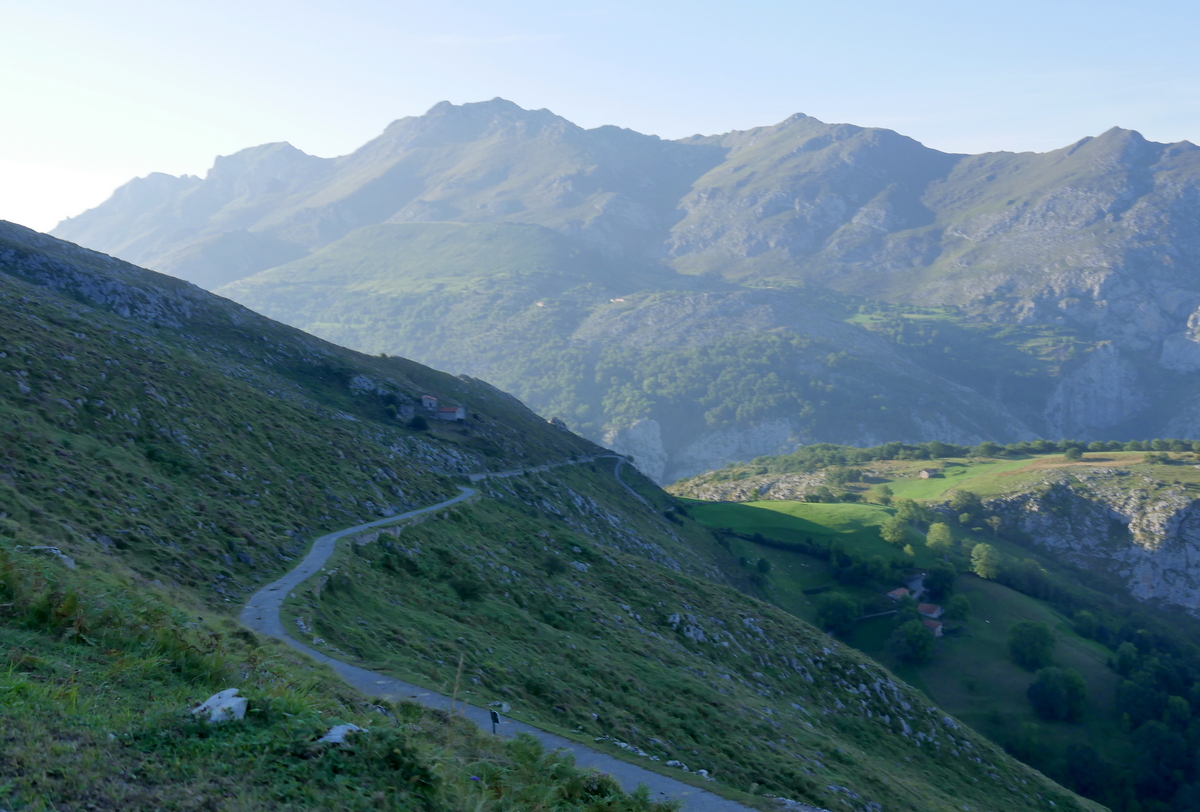 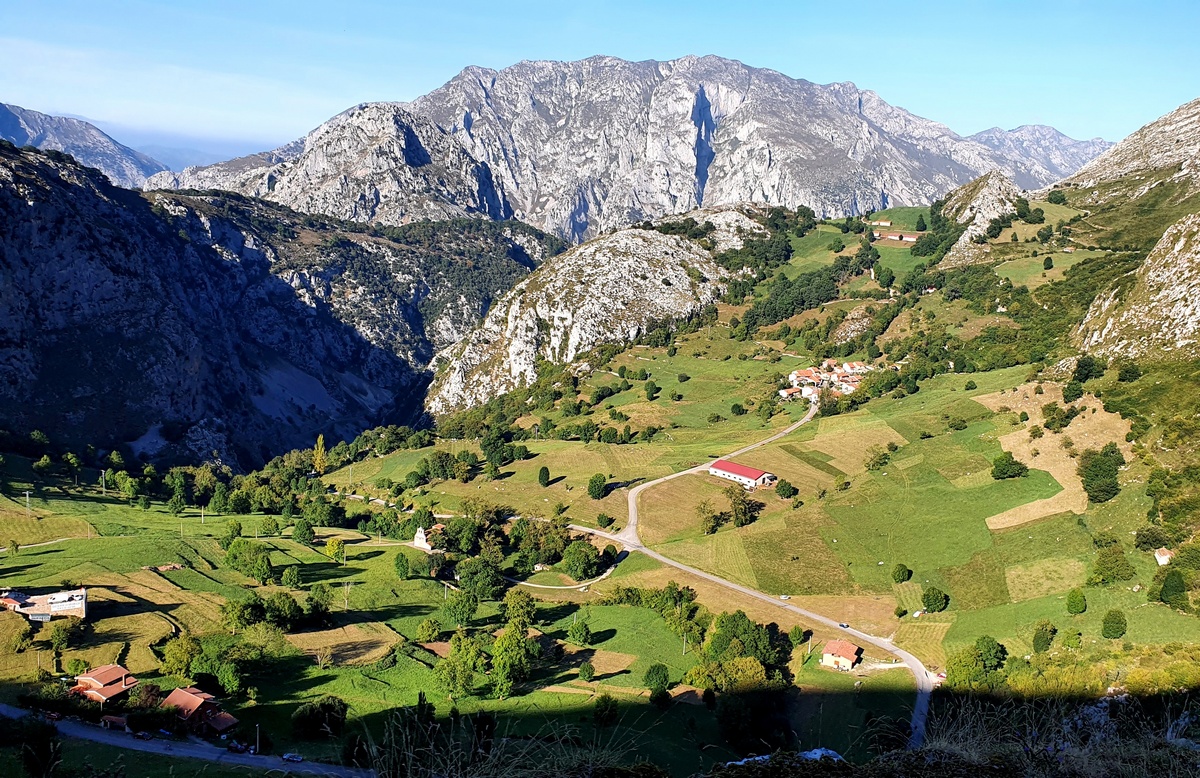 I rather watched the other side. The strips of rock were adorned with tiny purple flowers and strange thistles with distinctly blue stems. In some places, cows grazed among the flowers, but sometimes they went for a walk right on the road ahead of our car, which made it even more difficult for us to drive. 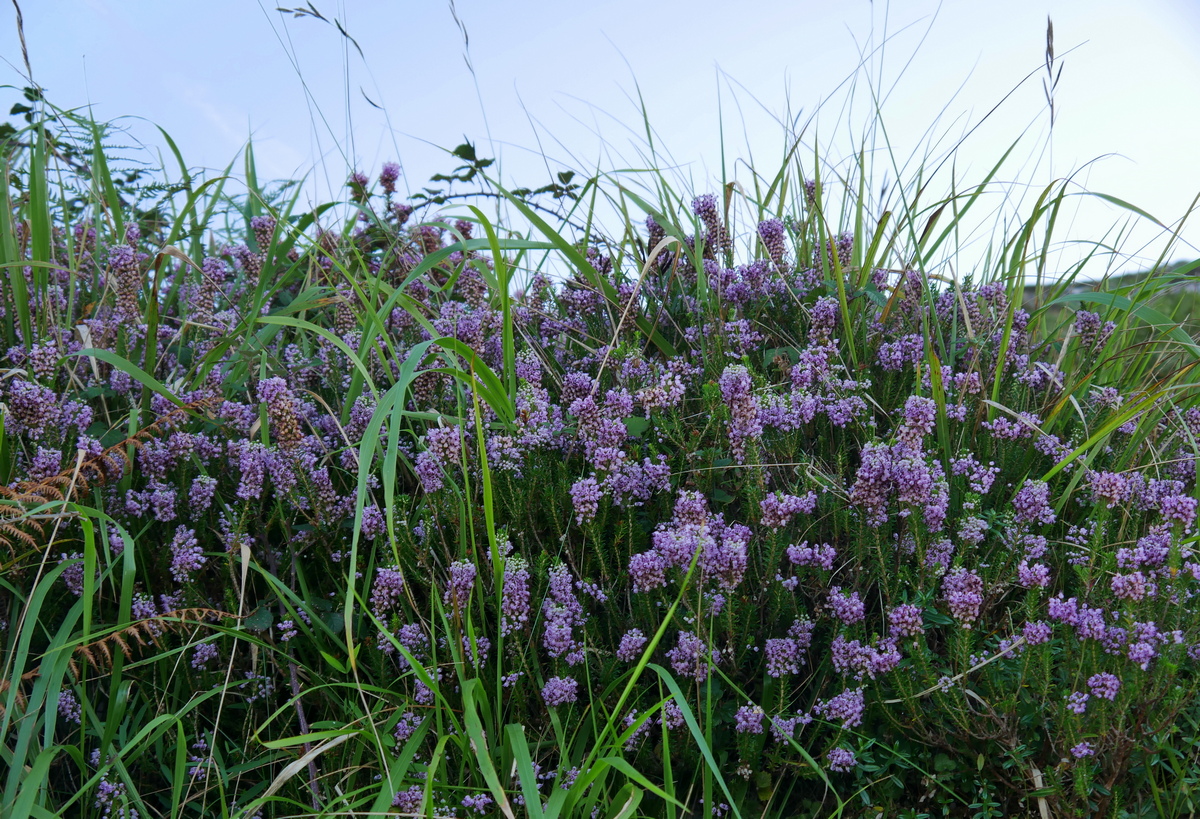 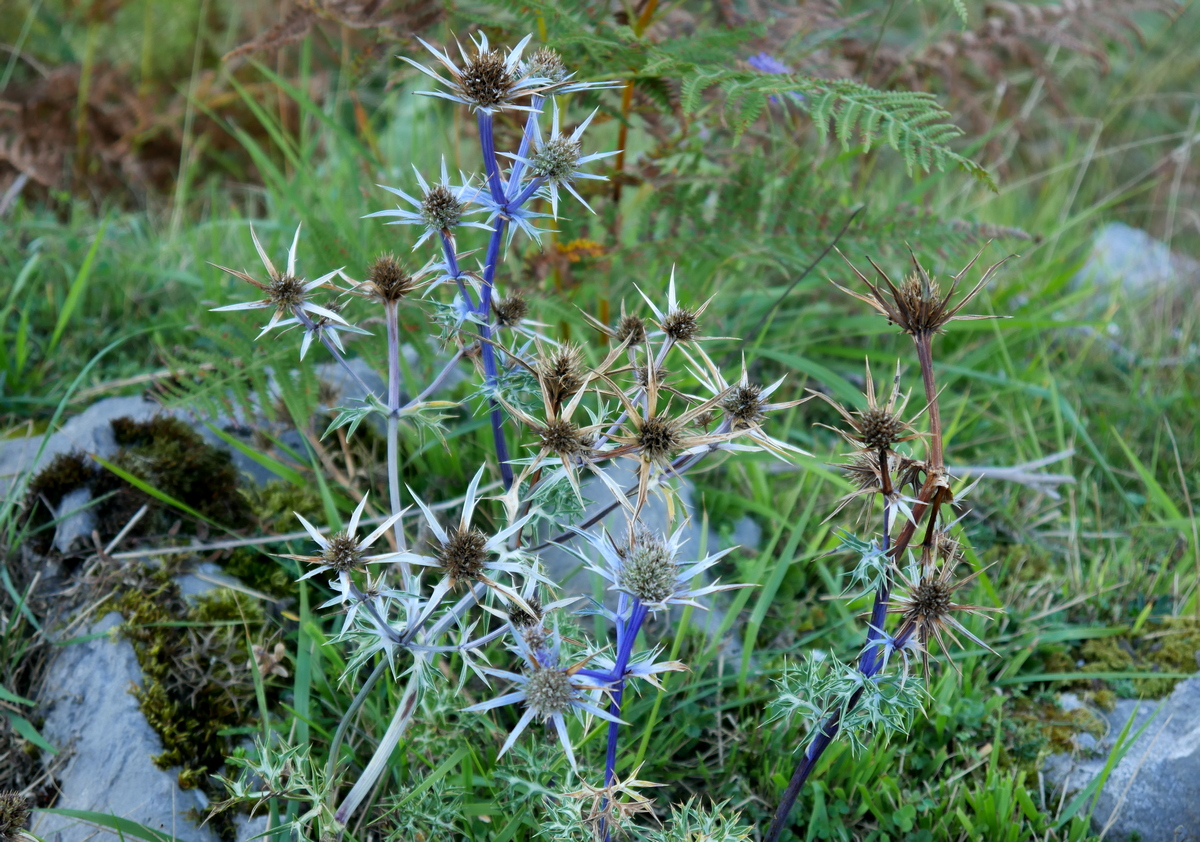 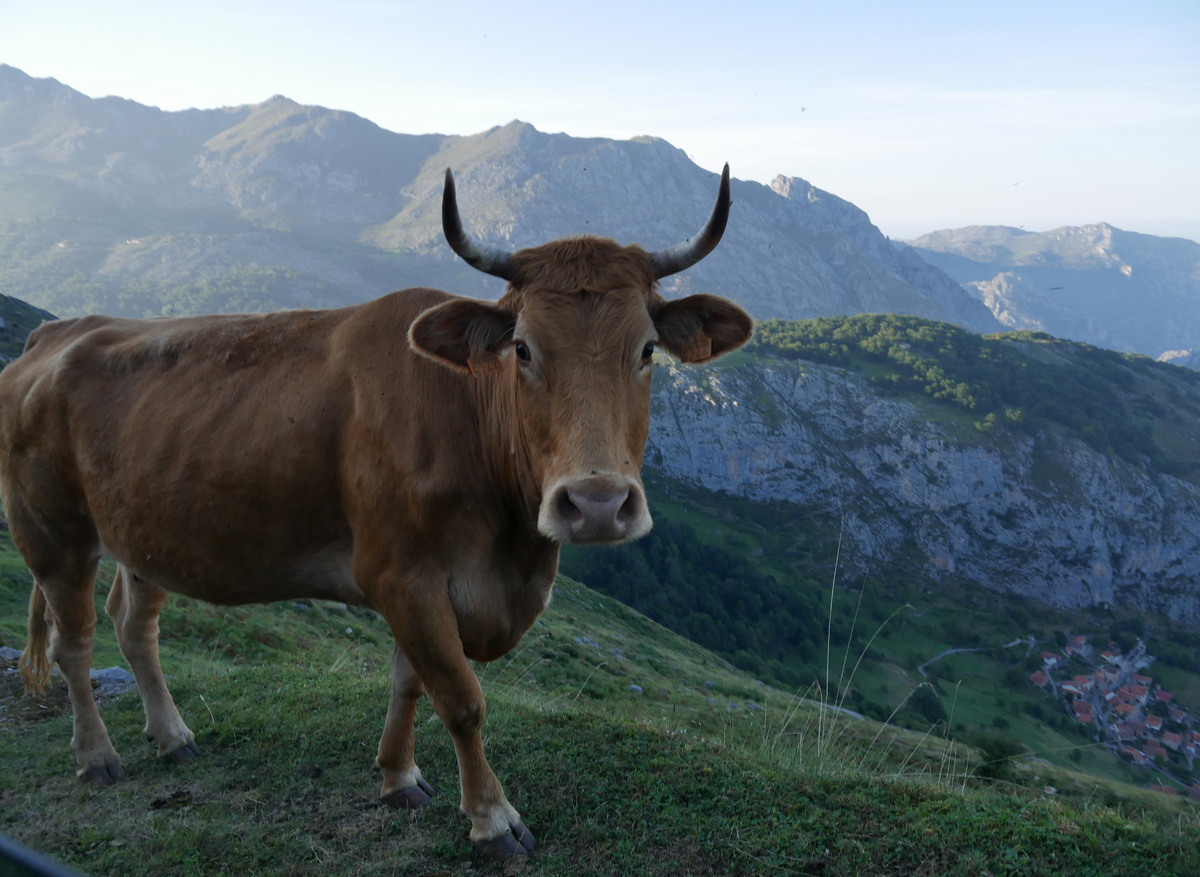 Apart from the animals, there was no living soul there. Occasionally, an empty shepherd’s stone dwelling appeared in the meadow. 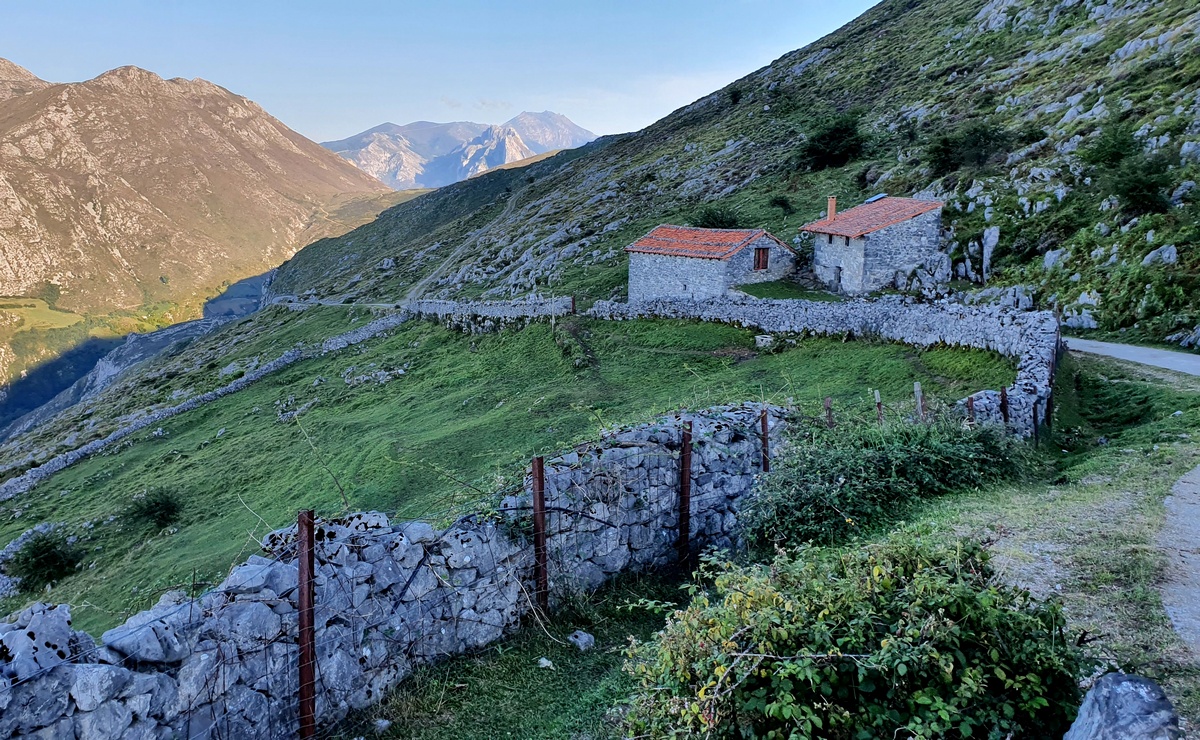 We were already at an altitude of almost 1.000 m above sea level. I was looking for a cave, but even when we stopped and got out of the car, I didn’t see any. We walked a little downhill and there was a small door in the lush vegetation. Jaime first sprayed the door with a repellent so that the flies would not feel like making a trip to the cave. To this day, I don’t quite understand how I managed to get through the small square entrance with a backpack on my back and a camera hanging around my neck… 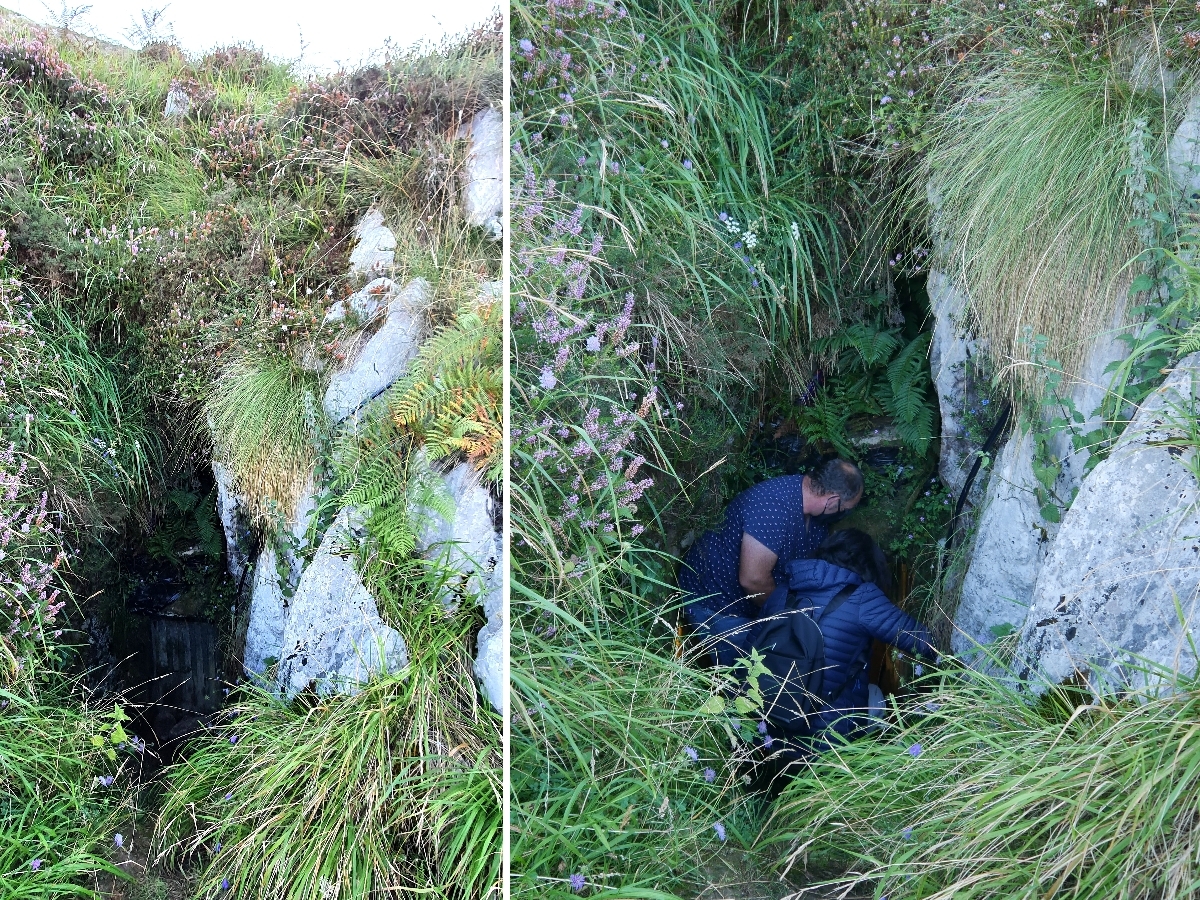 The instant we found ourselves inside this natural limestone cave, the cheese greeted us with its unmistakable aroma, which we could also feel through the facial mask on our noses (at least we had a test that we had not lost our sense of smell and had no corona). 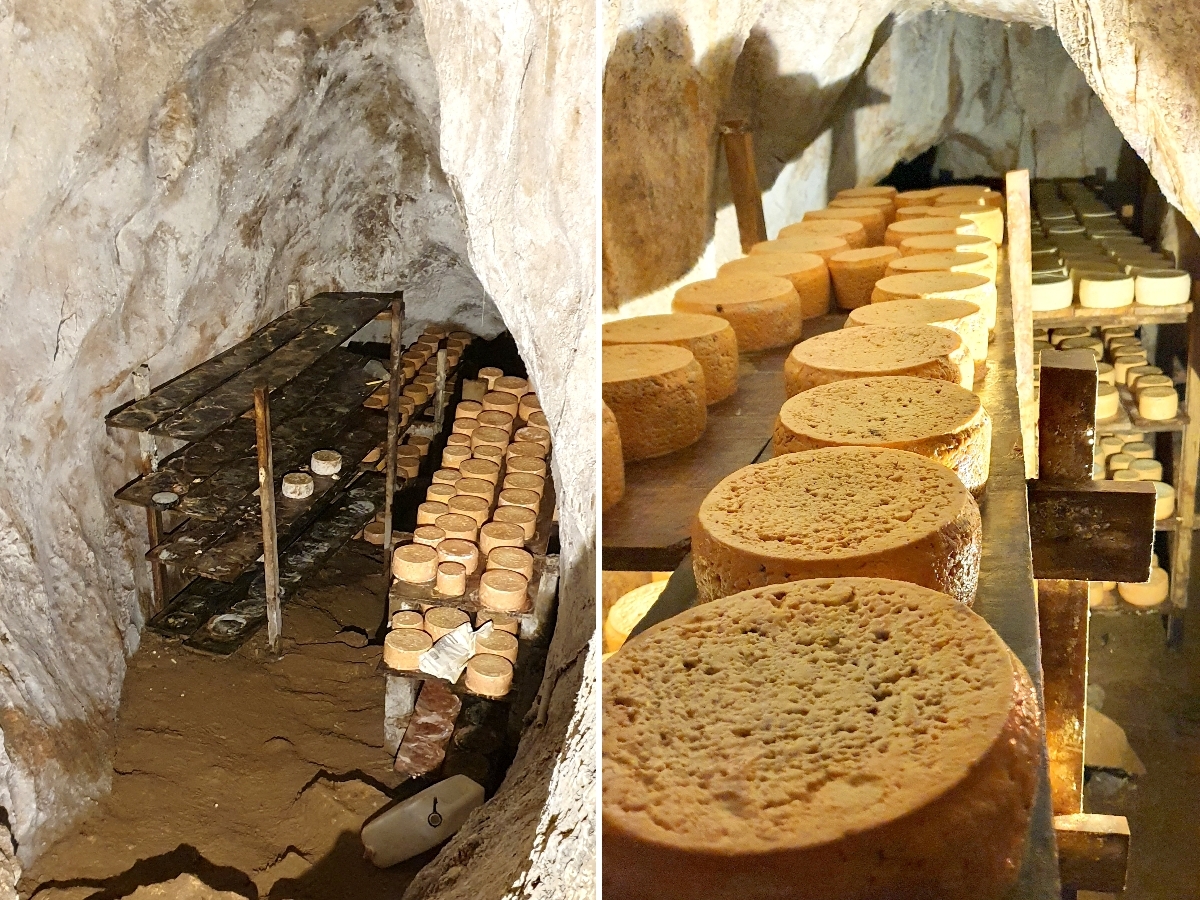 Jaime turned on the portable lamp and shone on his products. The cheese on the shelves was already yellow, and some of them already showed a blue-green tinge. The most mature cheese had white mould around the side. The cave can hold up to 1.5 tons of cheese! 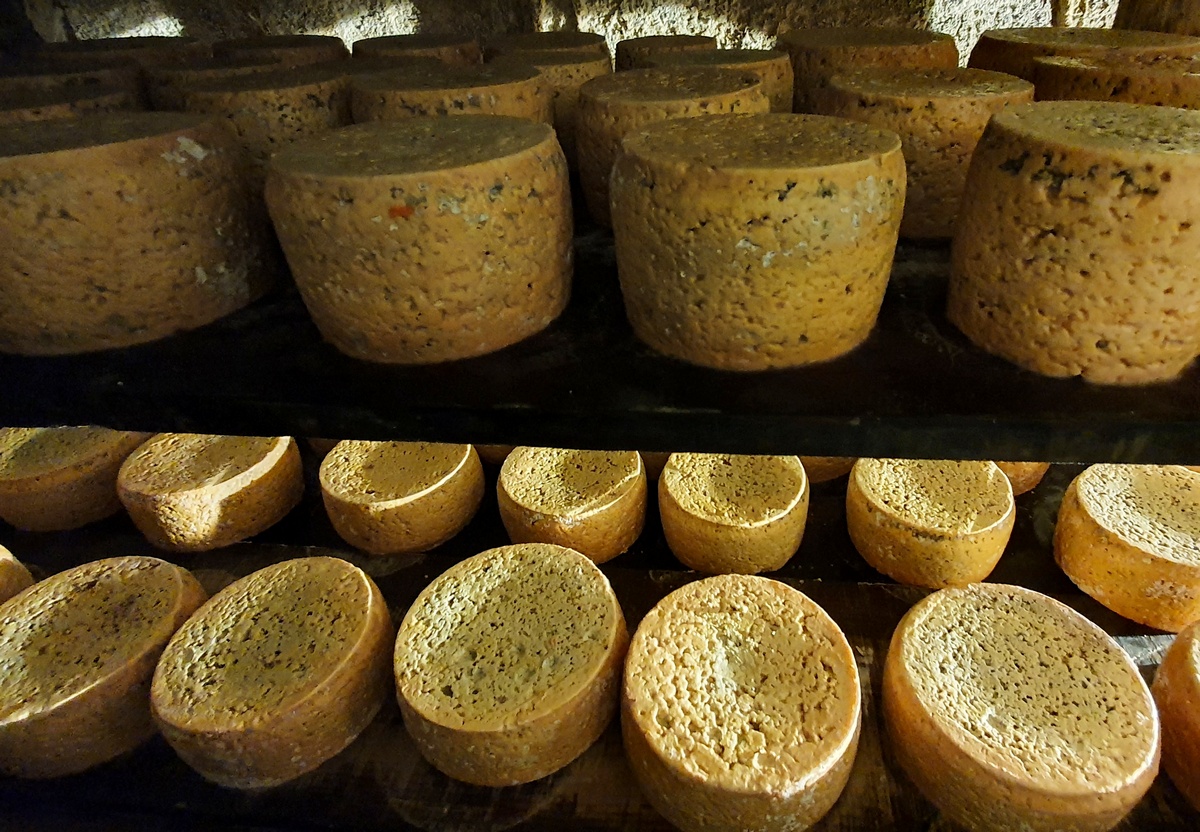 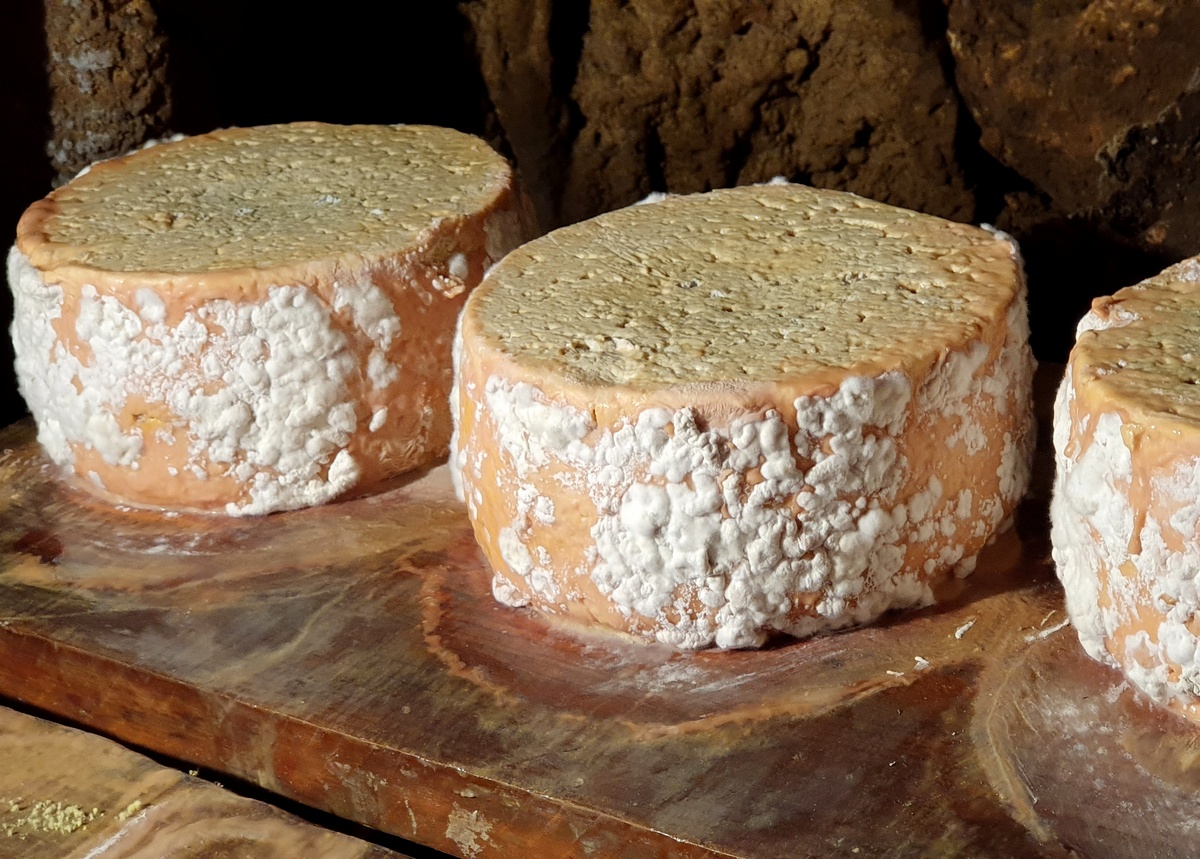 When I stayed in one place for a little longer, I was afraid that I would not come off the ground. It was covered with sticky mud. The cave was damp but not wet. Water is not dripping here like in other caves, so the cheese shelves don’t need a roof. Water does not penetrate even when there is snow outside. Jaime told us with a smile that it was a much bigger problem for him to find the snow-covered entrance then! The cave maintains a constant temperature of 11°C throughout the year, which is ideal for maturing cheese. The cheese stay here in the dark and damp for at least four months – the longer, the stronger the taste. As I mentioned, they need to be turned over once a week. If not possible (in winter), then at least once every two weeks.

We forced our way into the air through the small door (it went out easier than in) and went for a short walk. From the mountain pass Salto de la Cabra (1.109 m above sea level) we had a beautiful view of the Picos de Europa National Park. The massive mountains cast huge shadows in the early evening sun, and the shadows of the wooden stakes along the road lengthened ridiculously. 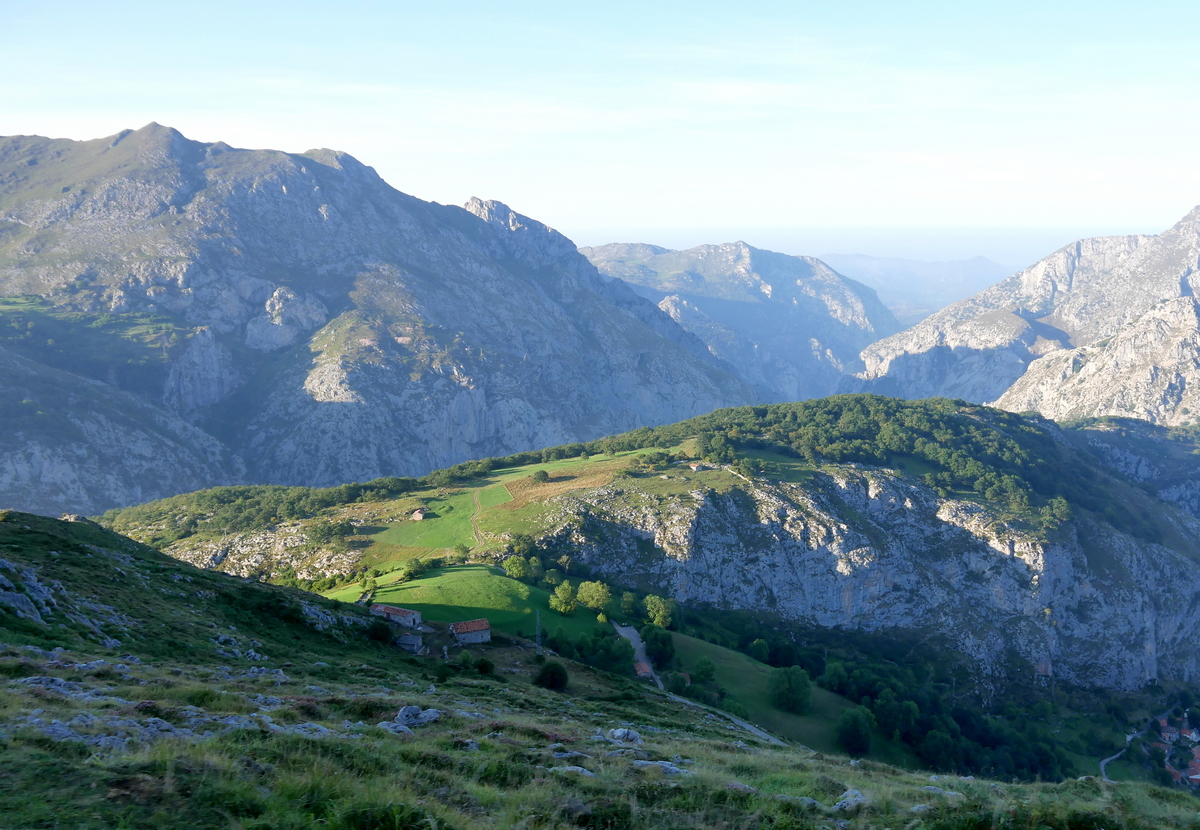 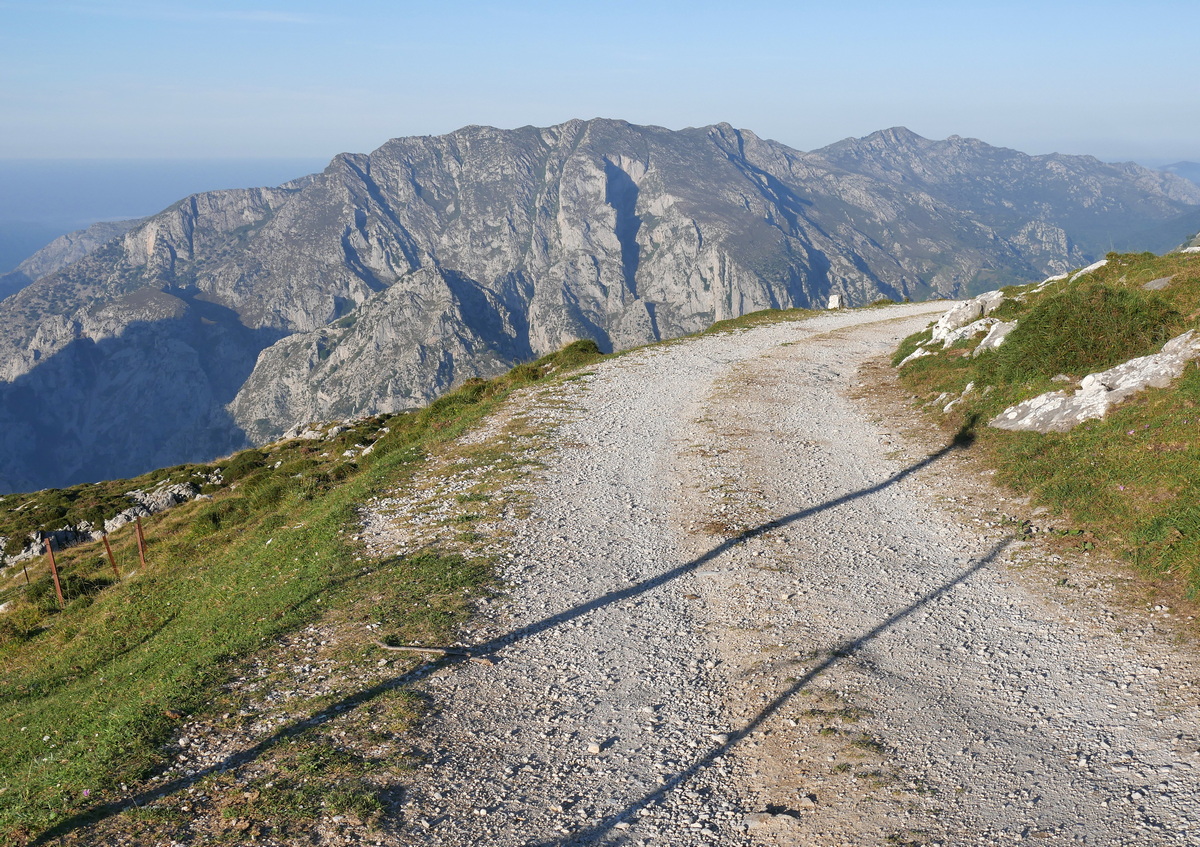 We returned to the cheese factory to taste the cheese we had learned so much about. Jaime took a large loaf and cut it. The cut was compact white with blue-green spots. The cheese had an excellent mildly spicy taste, which combined everything the cheese had absorbed during the months of its existence. 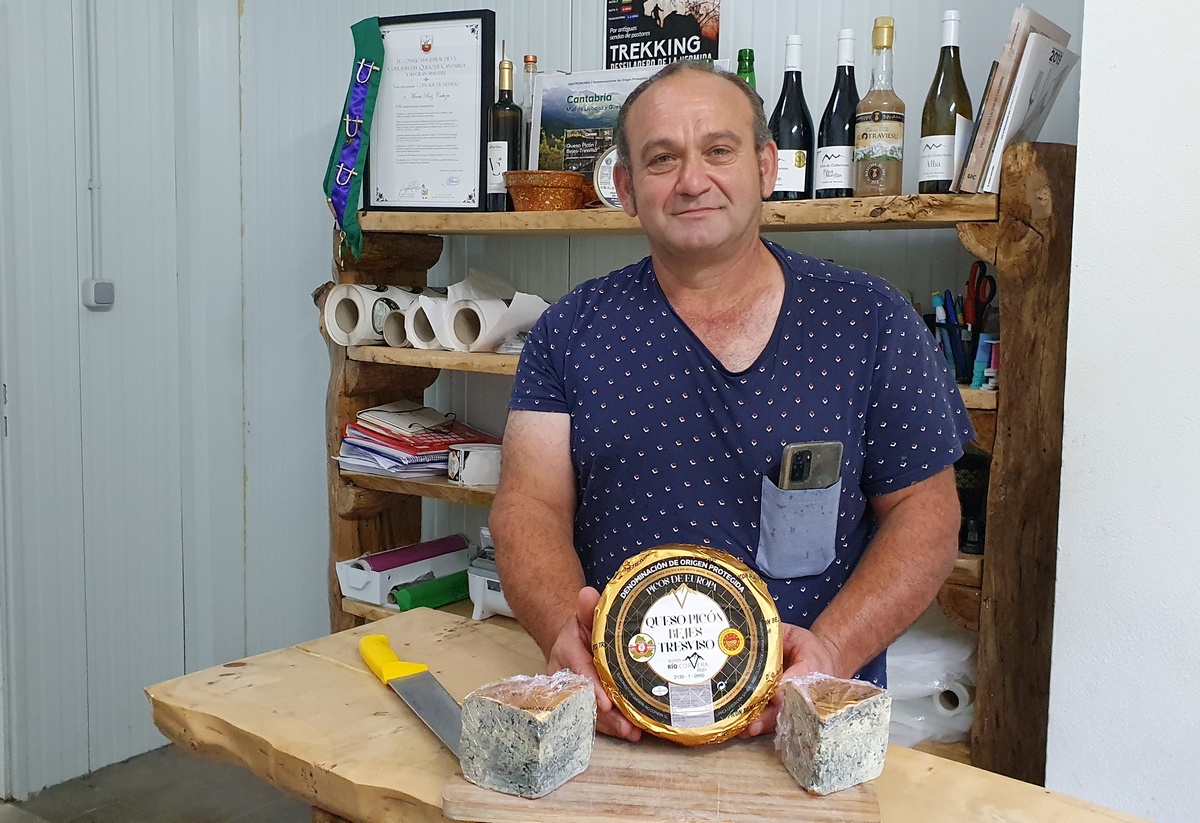 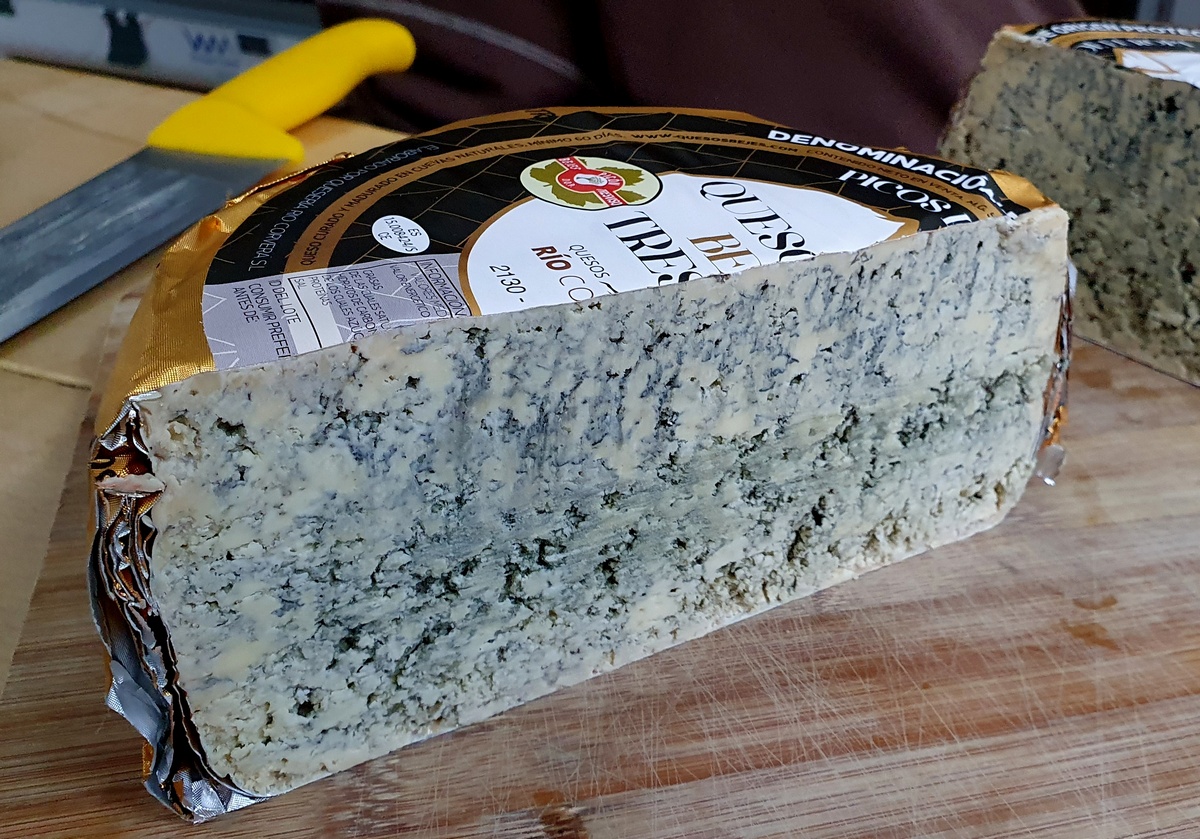 Similar cheese factories and caves can be found in several places in this region of Liebana, most in the villages of Bejes and Tresviso, which have also given the name to this local speciality. 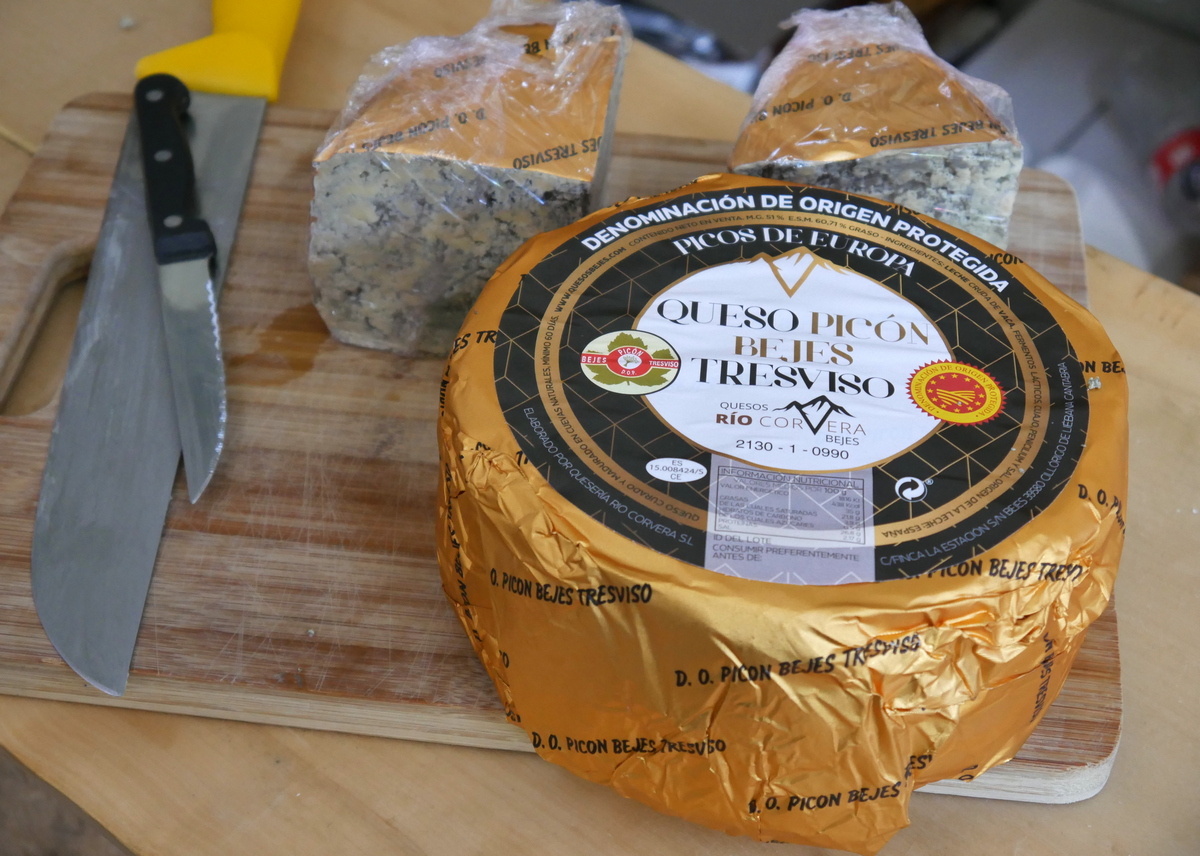 You can also read articles about other caves:

ALTAMIRA – in the art gallery of prehistoric man

My thanks to TURESPANA and Fundación Camino Lebaniego for arranging a visit to this cheese factory and cave for me. 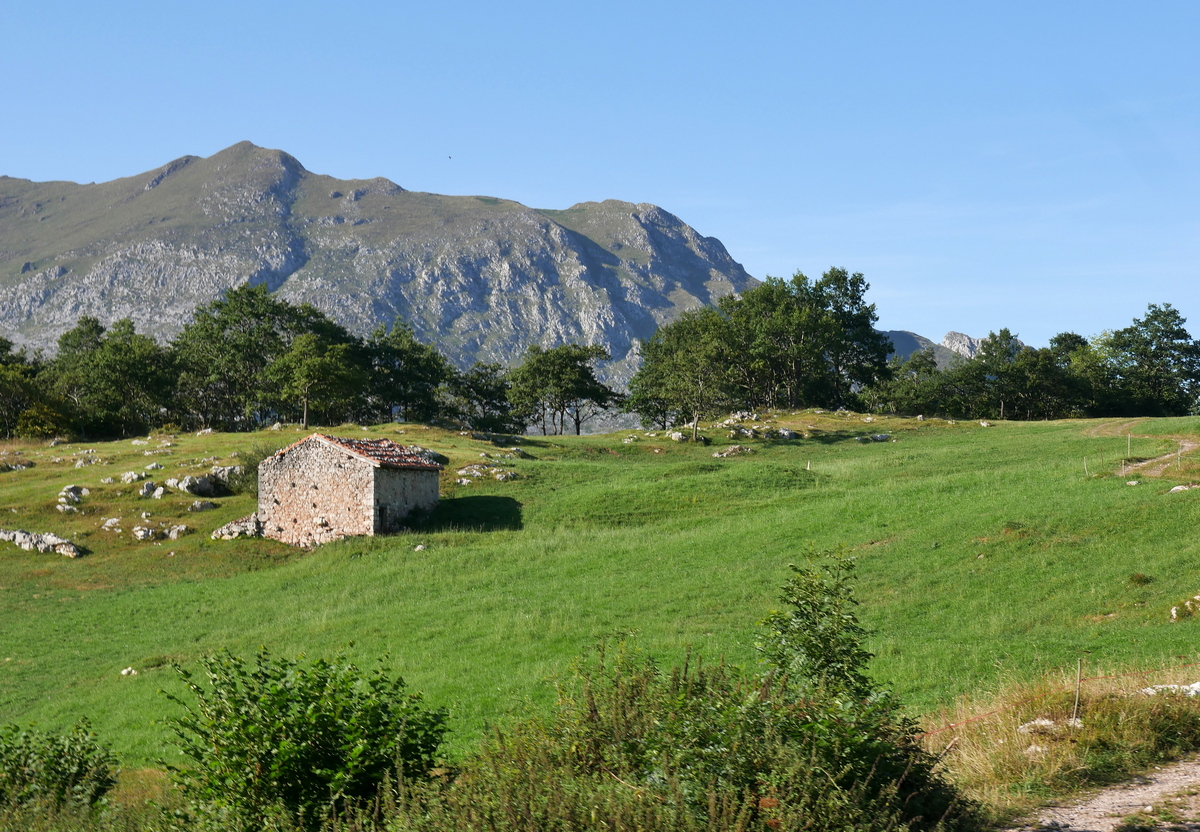 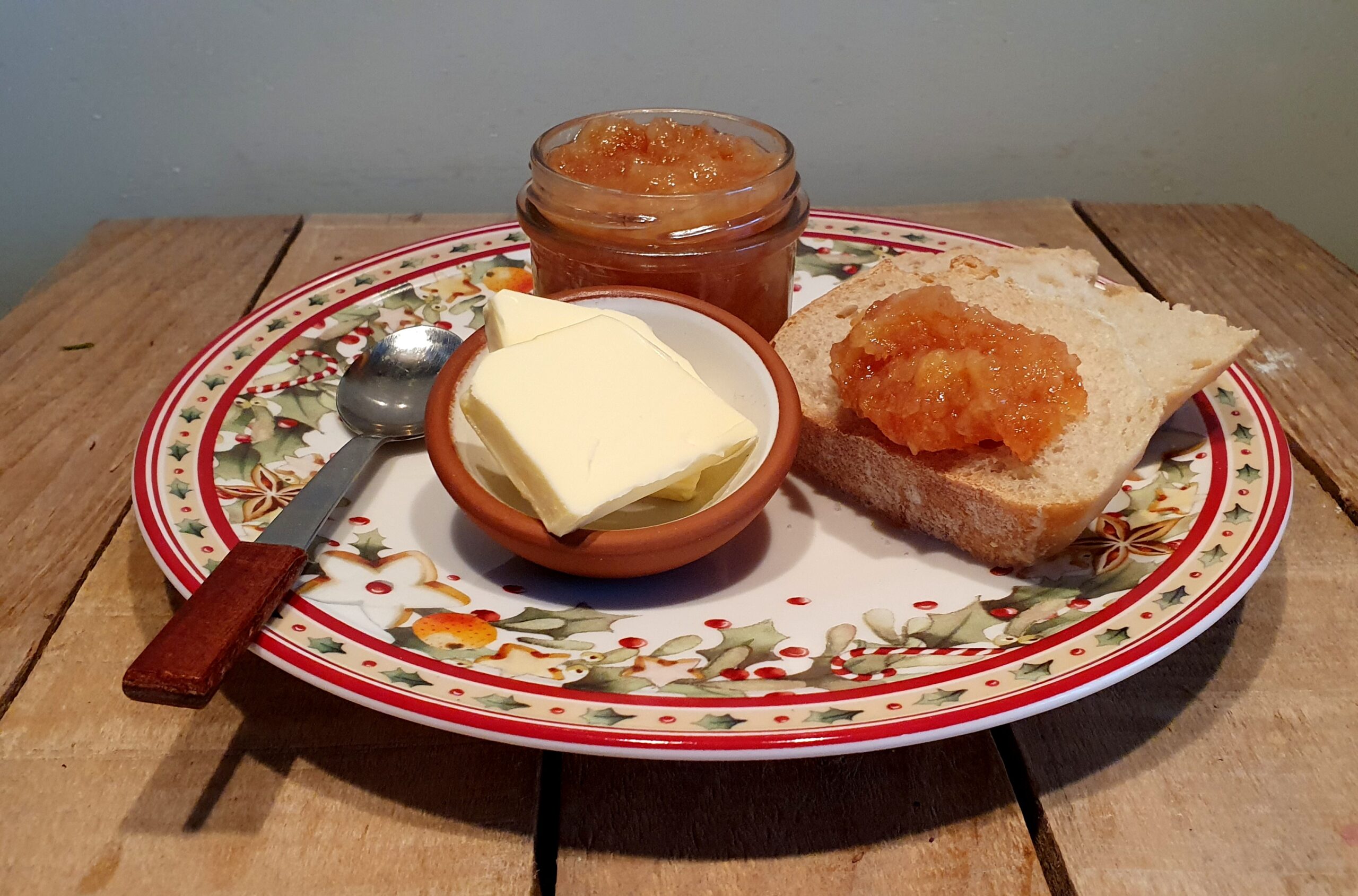 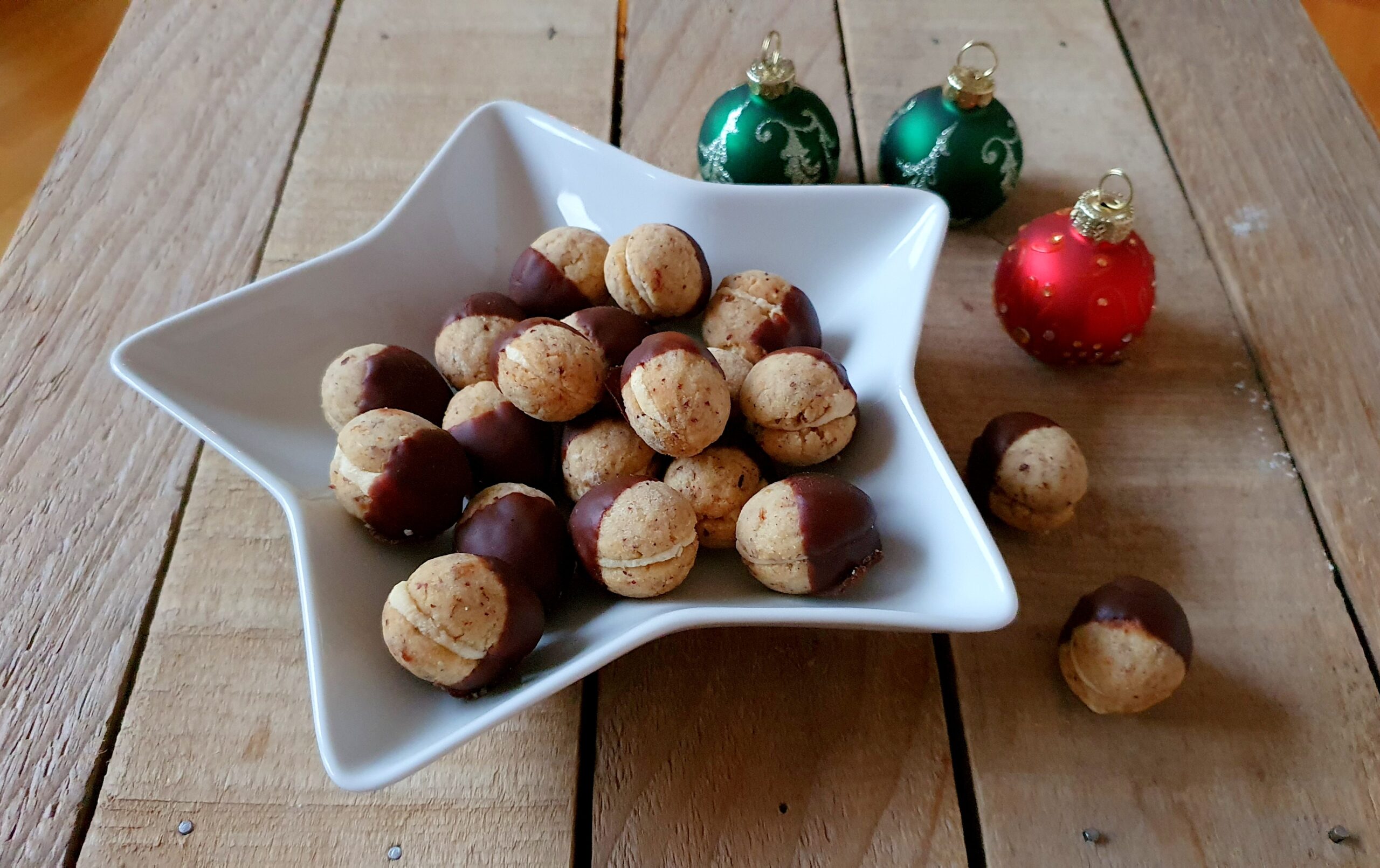