Kitzsteinhorn, an alpine mountain in the Hohe Tauern (state of Salzburg), is known mainly to skiers. Its characteristic silhouette has also become part of the logo of this region. 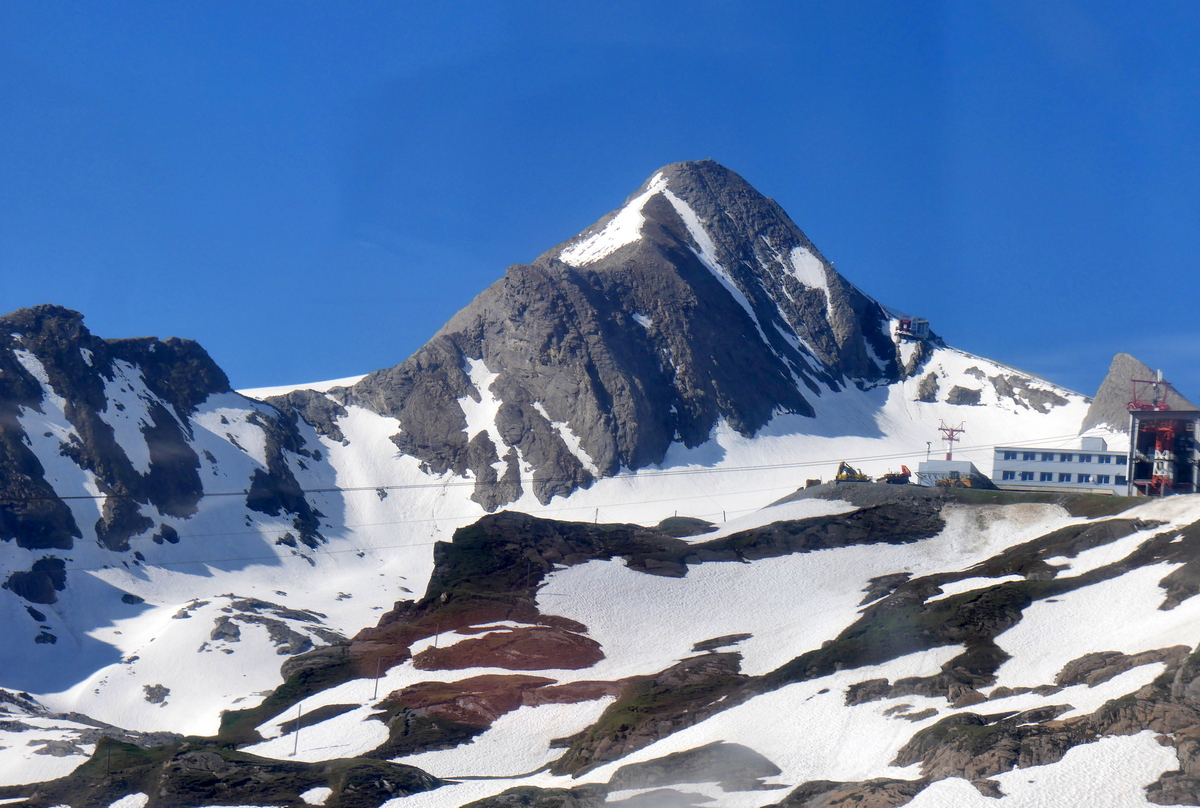 However, it is not only skiers who visit the area. Now, during summer, tourists come here who want to go hiking and breathe in the fresh mountain air. Or to have a hearty, delicious breakfast – like me! Because this can be a similarly great experience as winter skiing.

I got here at the beginning of summer, it was still early in the morning, most of the valley station of the panoramic cable car (911 m above sea level) was lost in the fog, so it was not even visible where the cabin would take us. 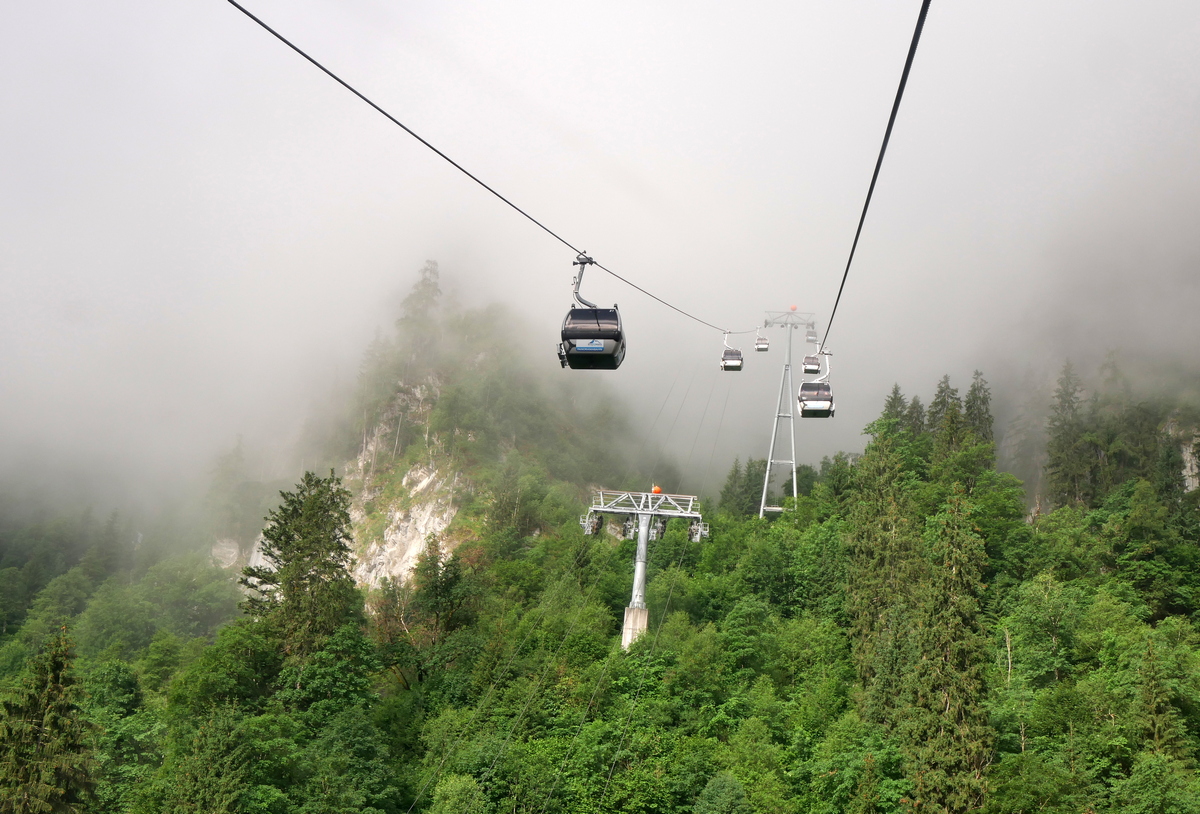 During the ride, however, the fog began to dissipate and beautiful views opened up all around us – rocky cliffs, flowing ribbons from the melting snow and deep green trees. As the height increased, the trees disappeared. Bright white tongues of snow crawled across the low greenery. Sheep grazed on the mountain pasture. 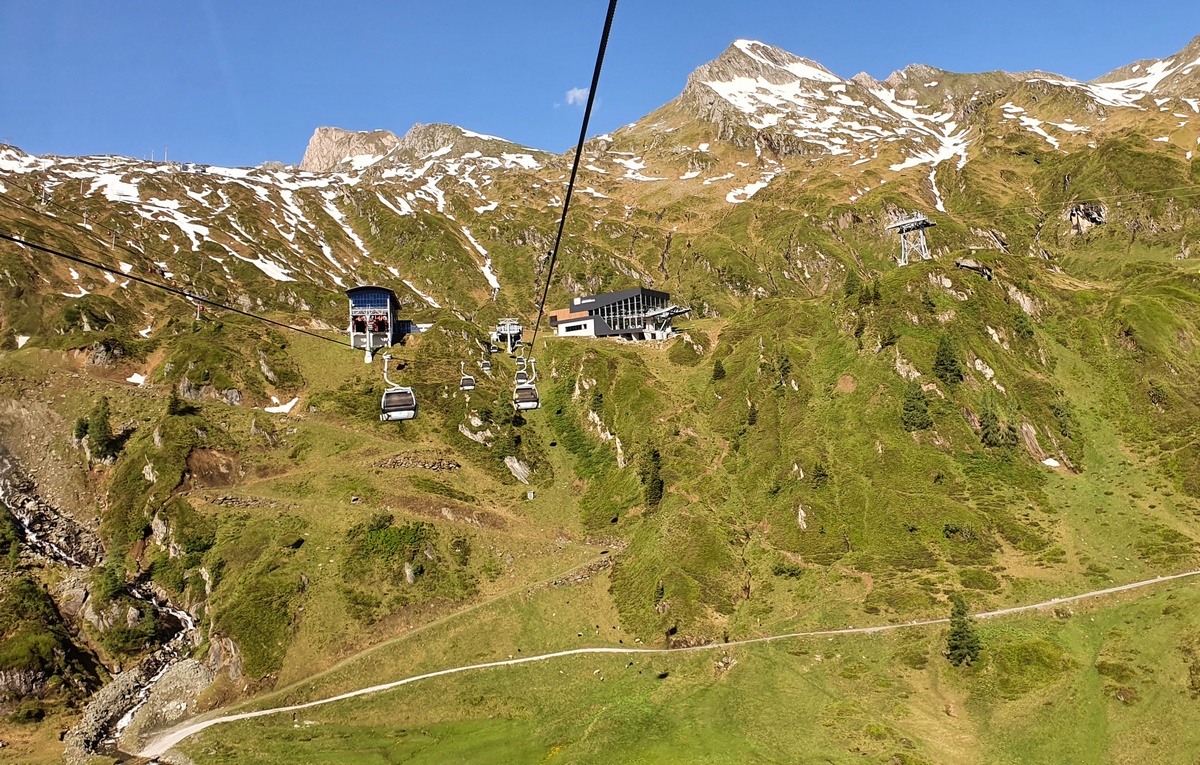 The Alpincenter at 2,450 meters above sea level was still without people, sporting goods stores were opening and offered their goods for sale. You could also rent skis and boots there, even warm winter anoraks. We didn’t need them because the summer sun was sharing its golden rays high in the sky. But the sharp mountain wind was cold. 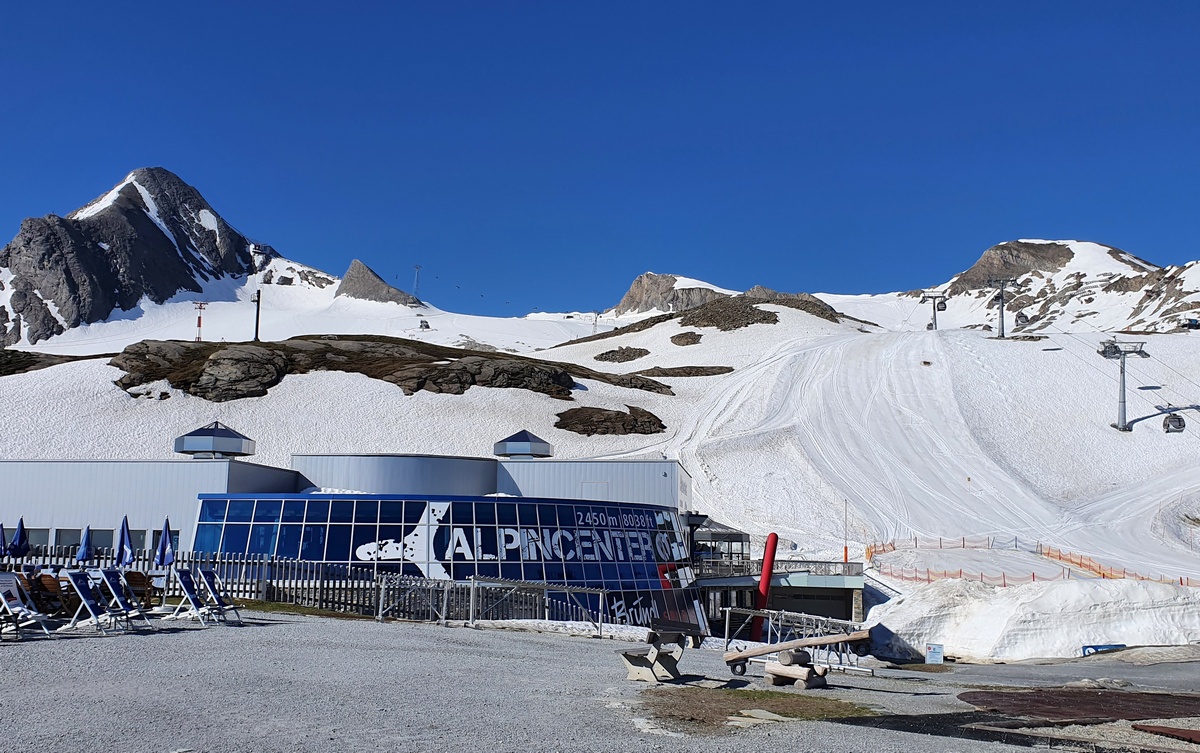 I have to admit that I guess I haven’t even been to a place with so many different kinds of cable cars before. A real paradise for skiers! The Kitzsteinhorn Glacier Ski Area – right at the border of the Hohe Tauern National Park – offers 40 km of slopes at an altitude of 768 to 3,029 meters above sea level and is open from October to July. It is one of the best ski resorts in Austria, possibly in Europe – in fact, the first glacier ski slope in the Austrian Alps, the first glacier skiing resort in Austria. Its development began with the launch of a large cable car on December 12, 1965. 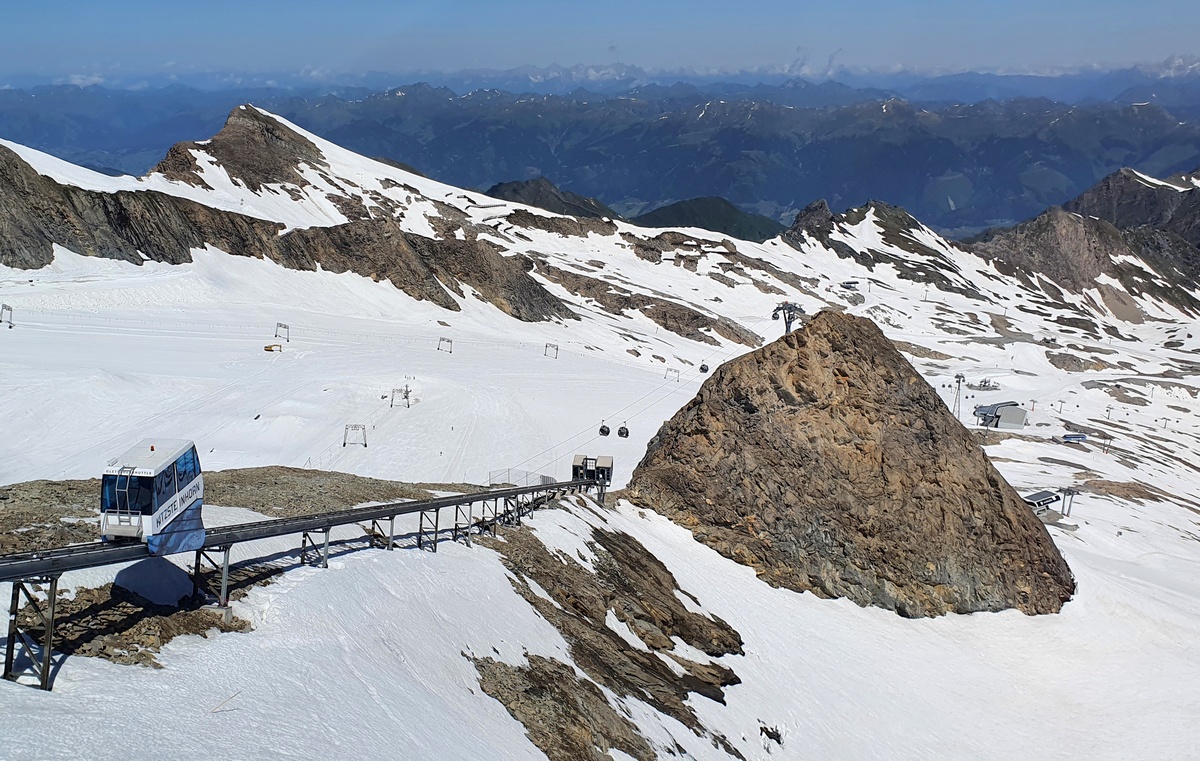 Today, comfortable cable cars of various sizes, shapes and colors run here. In the whole entanglement, I liked the round cabins of the Gletscherjet 2 the most. Their distinctive red color contrasted strikingly with the surroundings. The clouds were already somewhere deep below us and the majestic mountains were colored in various shades of blue and gray. 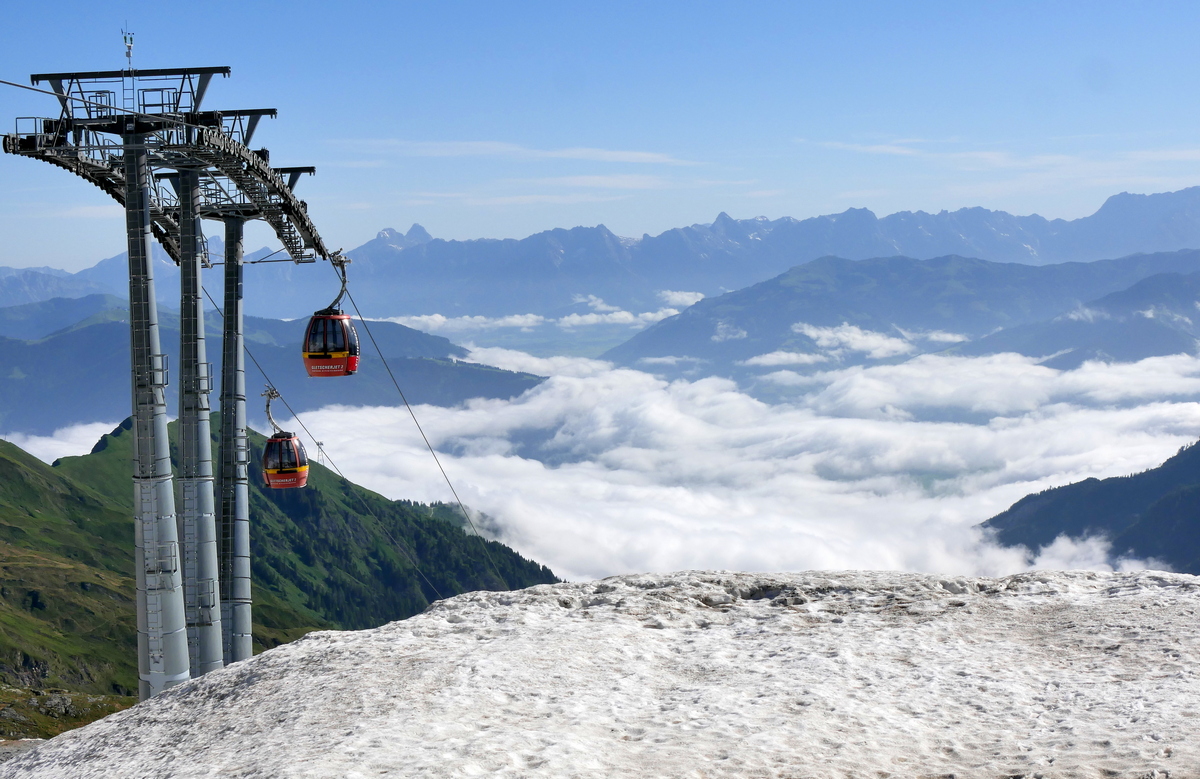 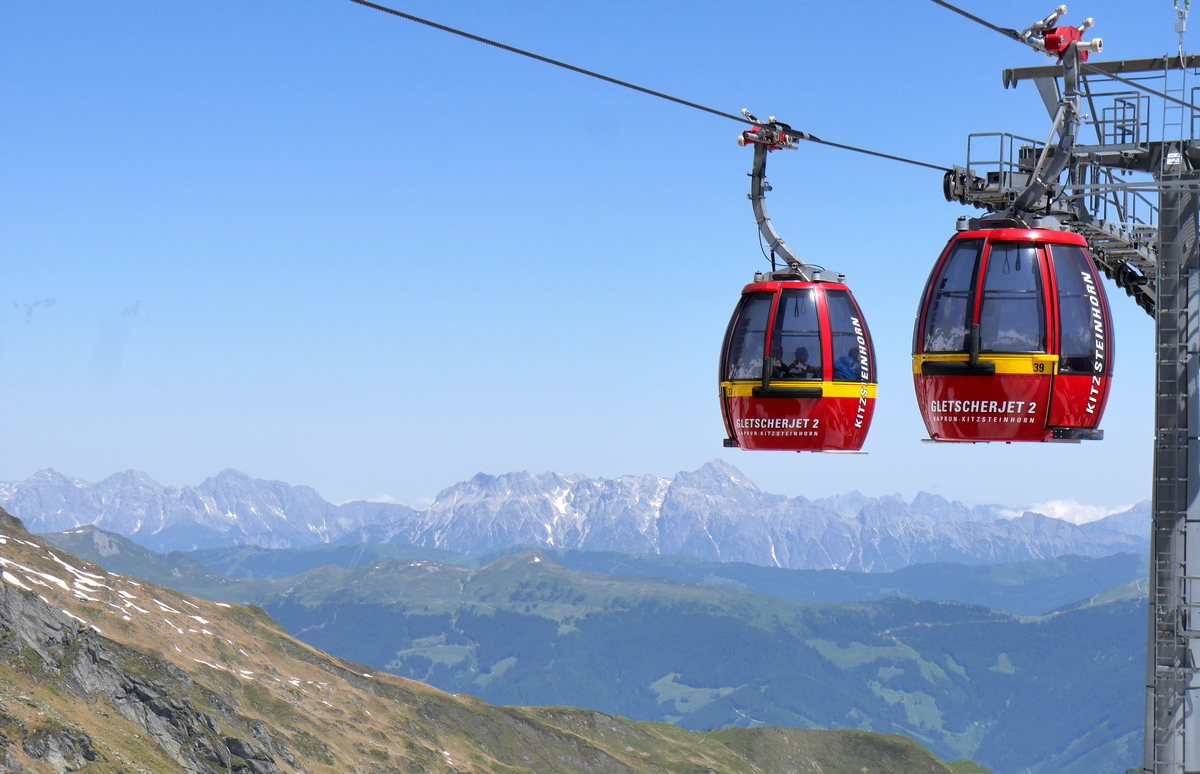 However, we were still not at the destination of our trip, but the restaurant below the summit of the Kitzsteinhorn was already easier to spot. 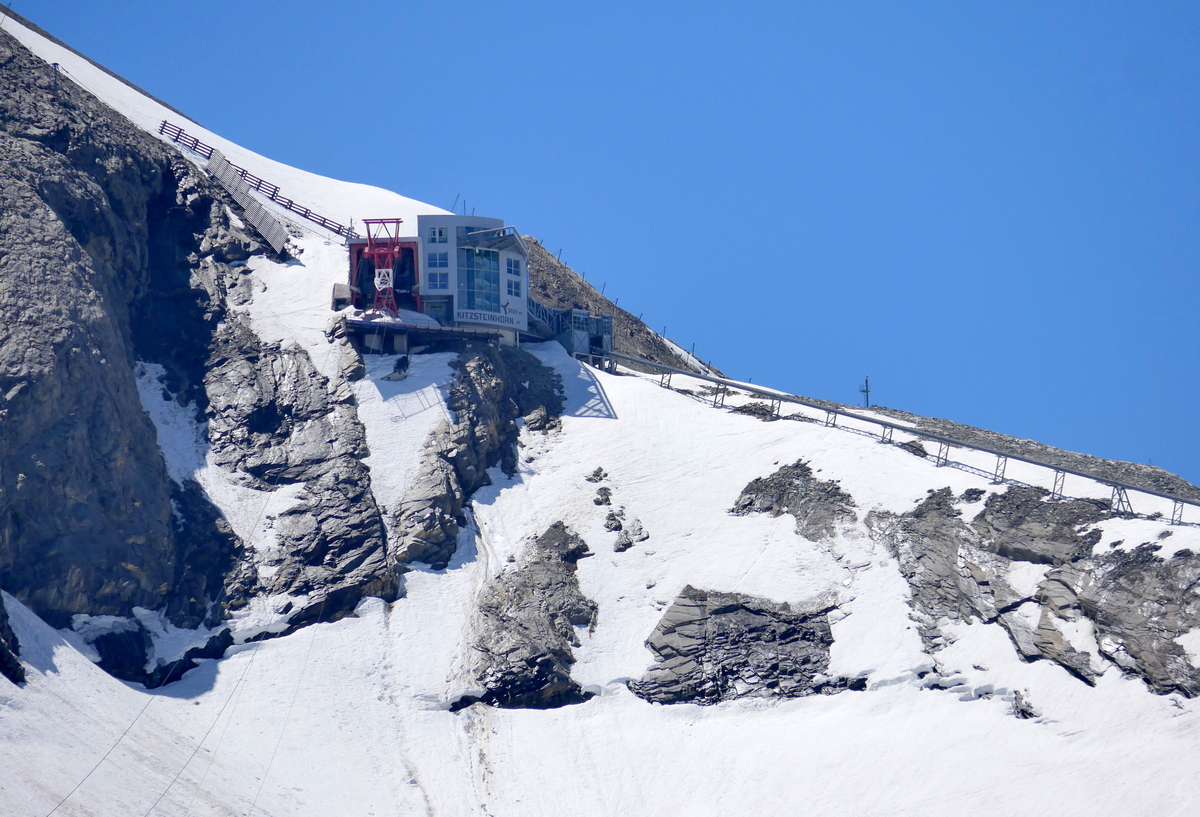 Alpine cuisine high above the clouds

We got up by another cable car – Gipfelbahn. The Gipfel Restaurant is Salzburg’s highest-situated restaurant. Breakfast had always been served here but since last autumn, they have become more and more focused on cooperation with regional suppliers and producers, which is one of the main pillars of sustainable tourism, which is increasingly being promoted by SalzburgerLand. 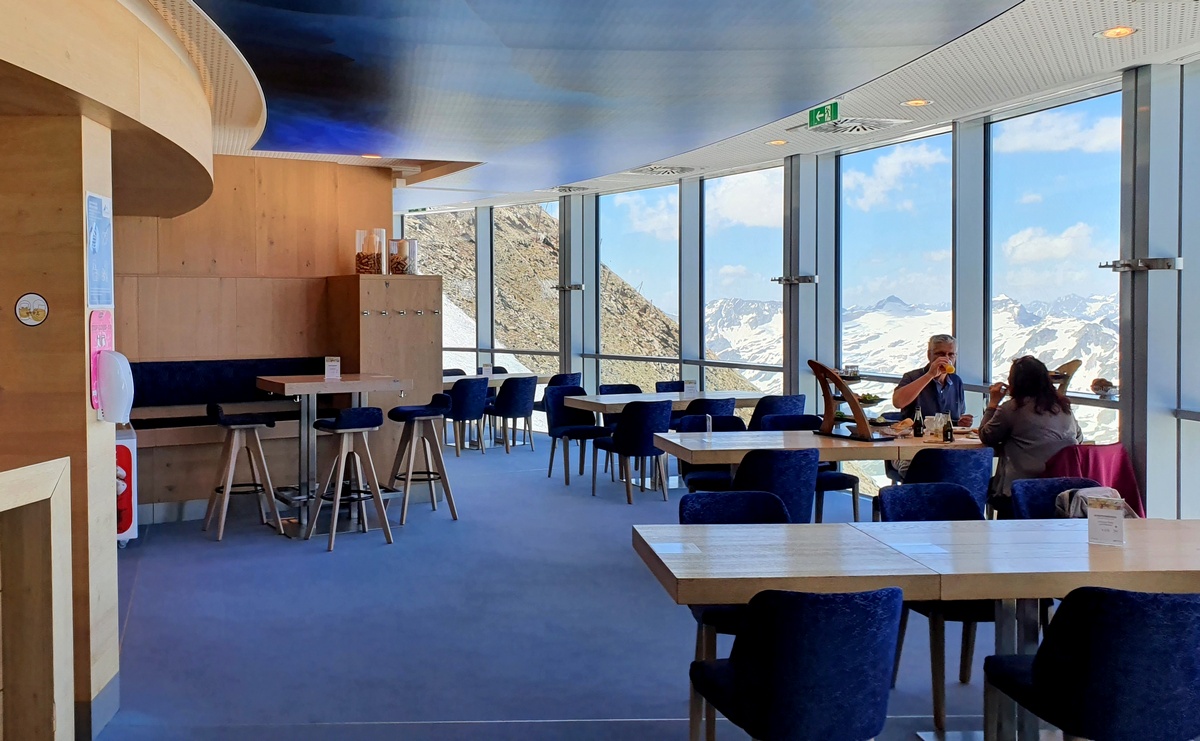 They offer both Viennese and Skier’s breakfasts, but we chose the Gipfelfrühstück – the Summit Breakfast because we were only less than 200 meters from the top of the mountain (3,203 m above sea level). Johann Entacher was the first to climb the Kitzsteinhorn in 1828 – he would certainly be amazed at how comfortable you can get here today, a hundred years after his climbing. 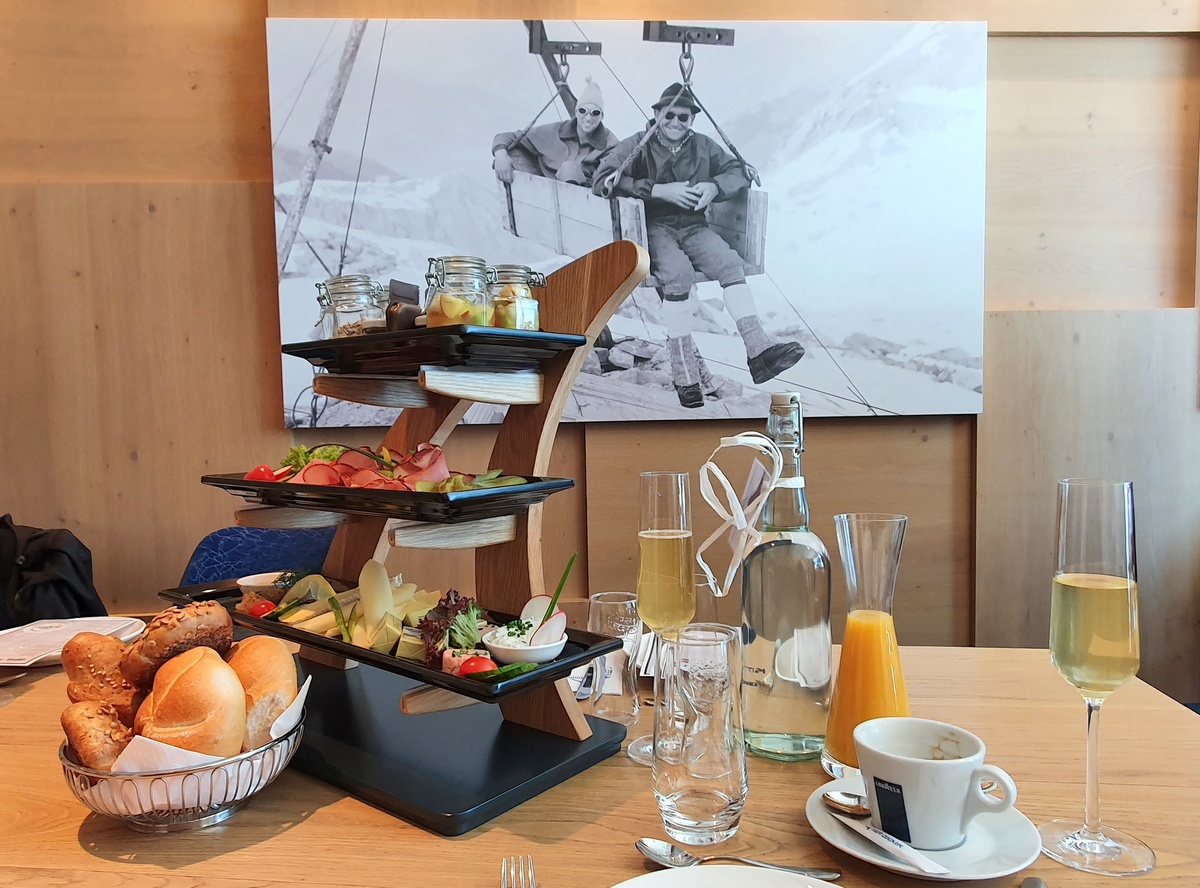 We started the breakfast with a toast from prosecco and liqueur made of the mountain gentian root. Then a three-story wooden stand landed on the table with a variety of delicacies – cheese, ham, bacon, pickled trout (which was truly delicious!), various spreads, fresh pastries, butter, scrambled eggs, vegetables, yogurt, muesli, fruit salad – like I mentioned almost all ingredients were from the local region. In addition, two hot drinks of your choice, orange juice and water. 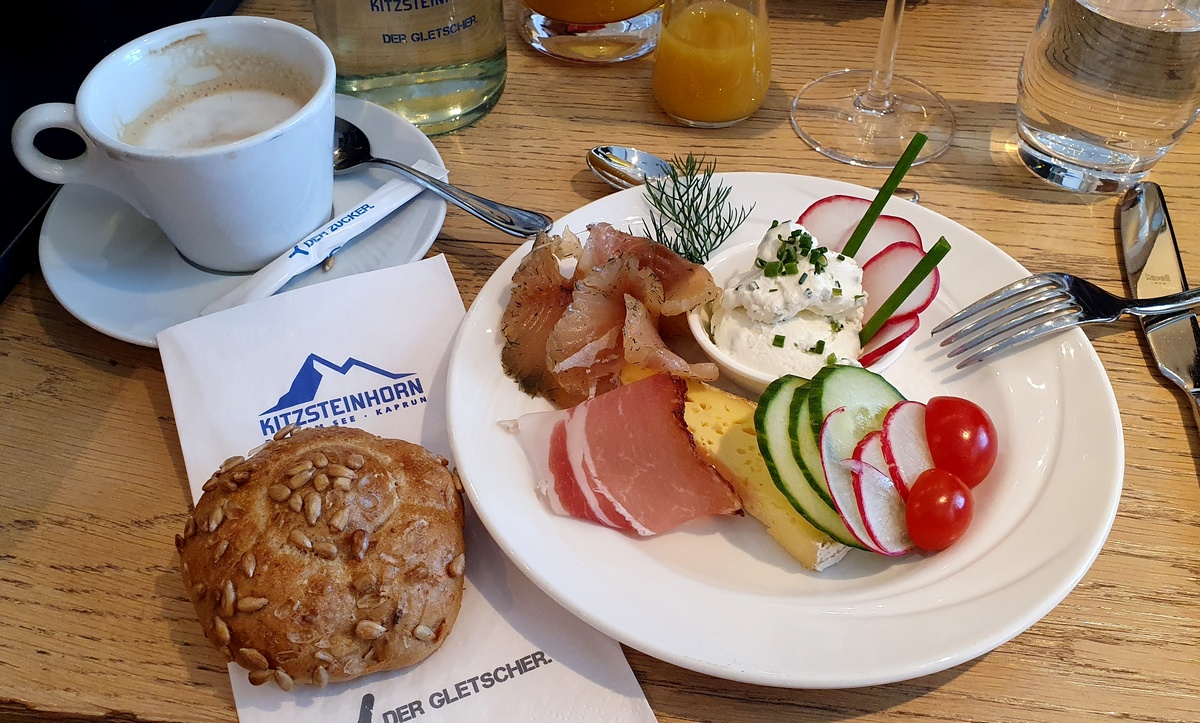 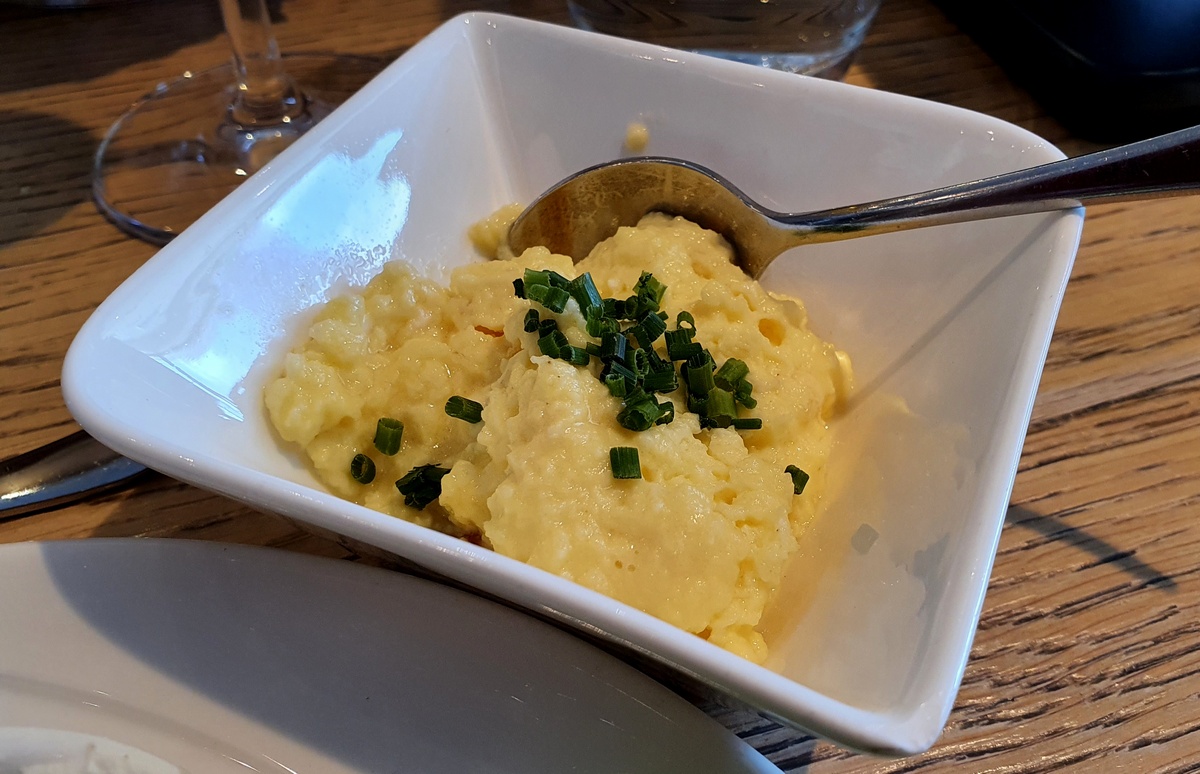 As a sweet dot at the end, small cakes appeared on the plate, beautifully sugared, like when the tops of the surrounding mountains are dusted with fresh snow. 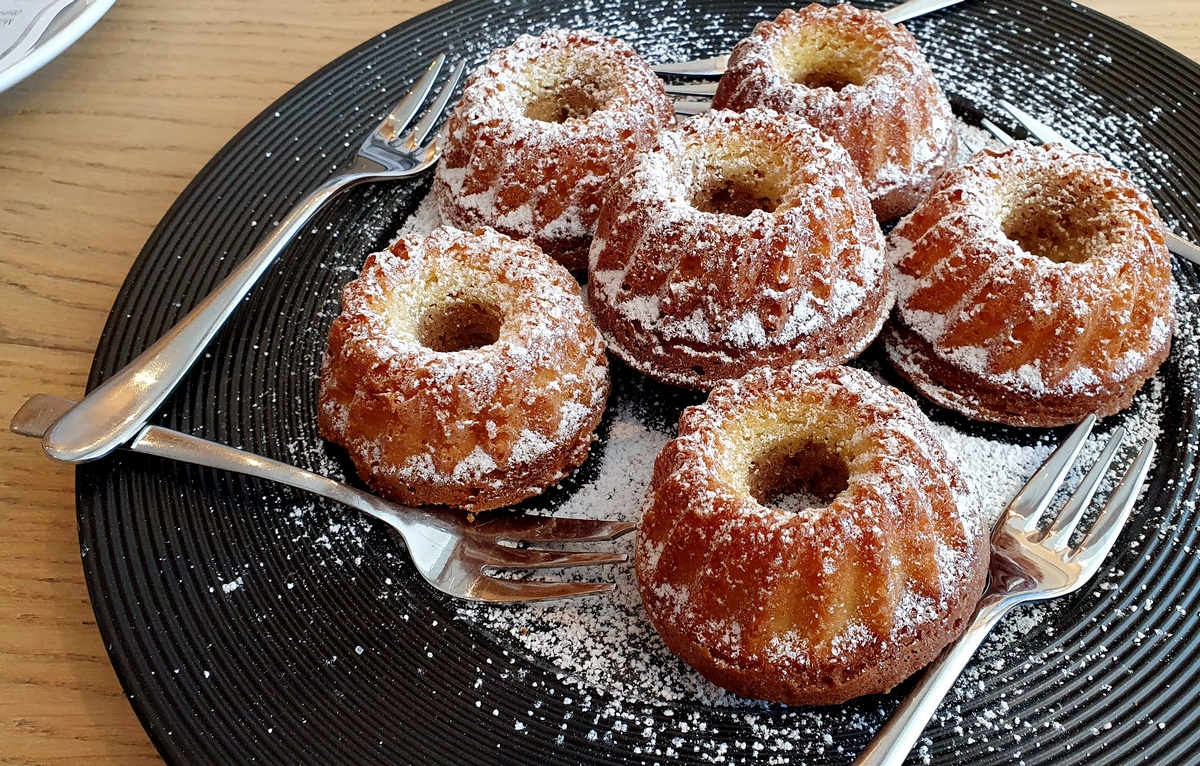 One stand is designed for two people, breakfast is served from 9.00 to 11.00, the price is 24.90 € (the year 2021). I didn’t even manage to eat it all! I can assure you that you will not be hungry for a long time after such a hearty breakfast, so this rich menu can easily be described as brunch.

However, you will also receive one great bonus to the breakfast: the Top of Salzburg panoramic platform at 3,029 meters above sea level. The view of the glacier kingdom of the National Park is amazing, although the glacier retreats 3 to 8 meters each year. 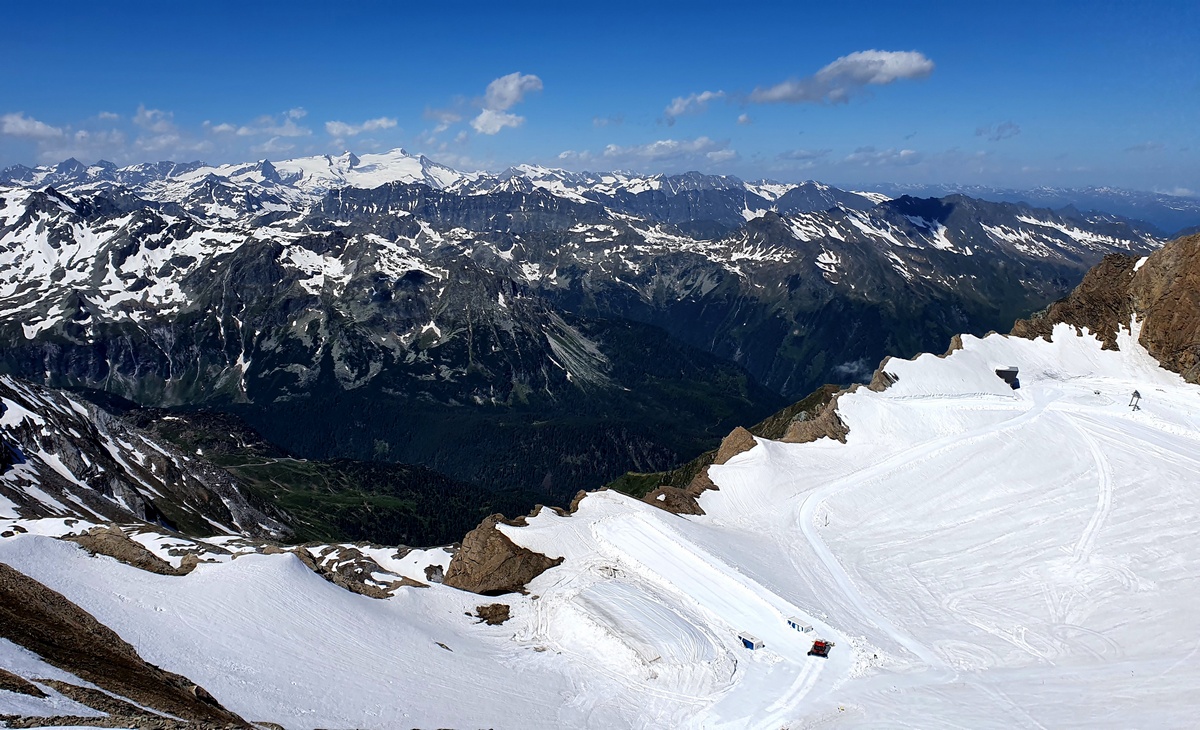 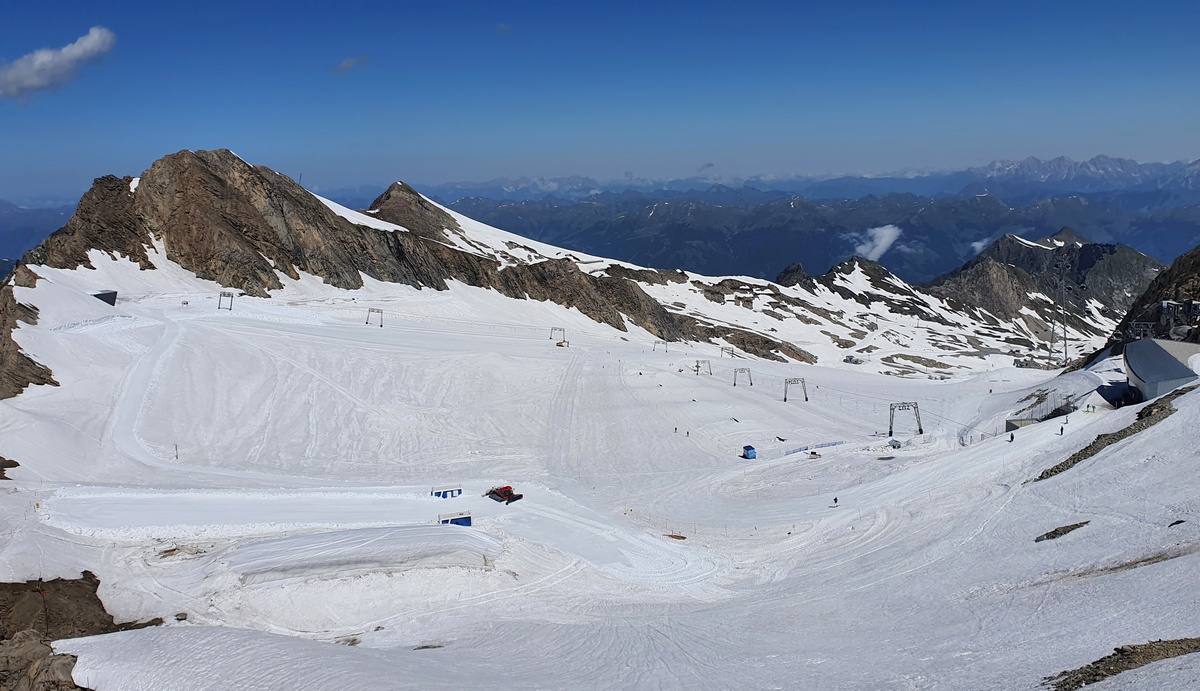 If you are bothered by strong winds, you can also enjoy this view from the inside and watch the skiers with a cup of coffee. 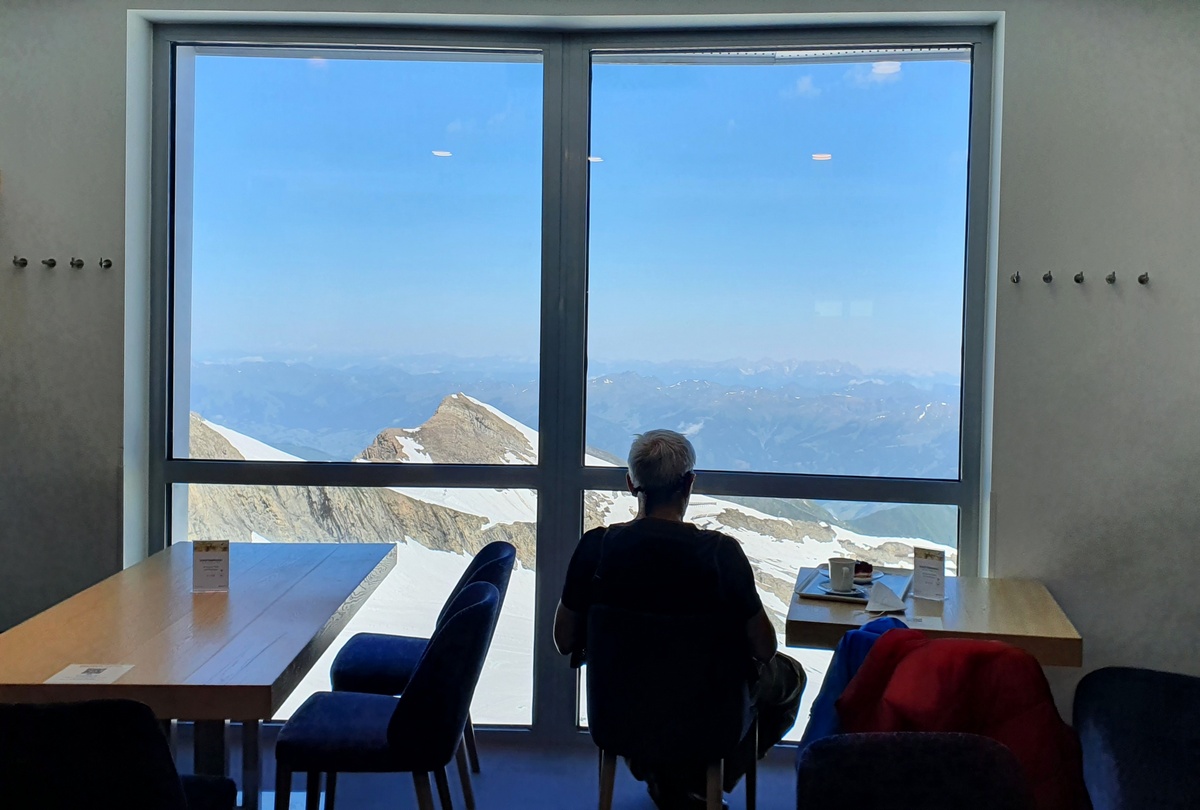 We also entered the Hanna Tunnel – named after Johanna, wife of Ing. Wilhelm Fazokas, a developer who contributed to the development of this glacier ski resort. 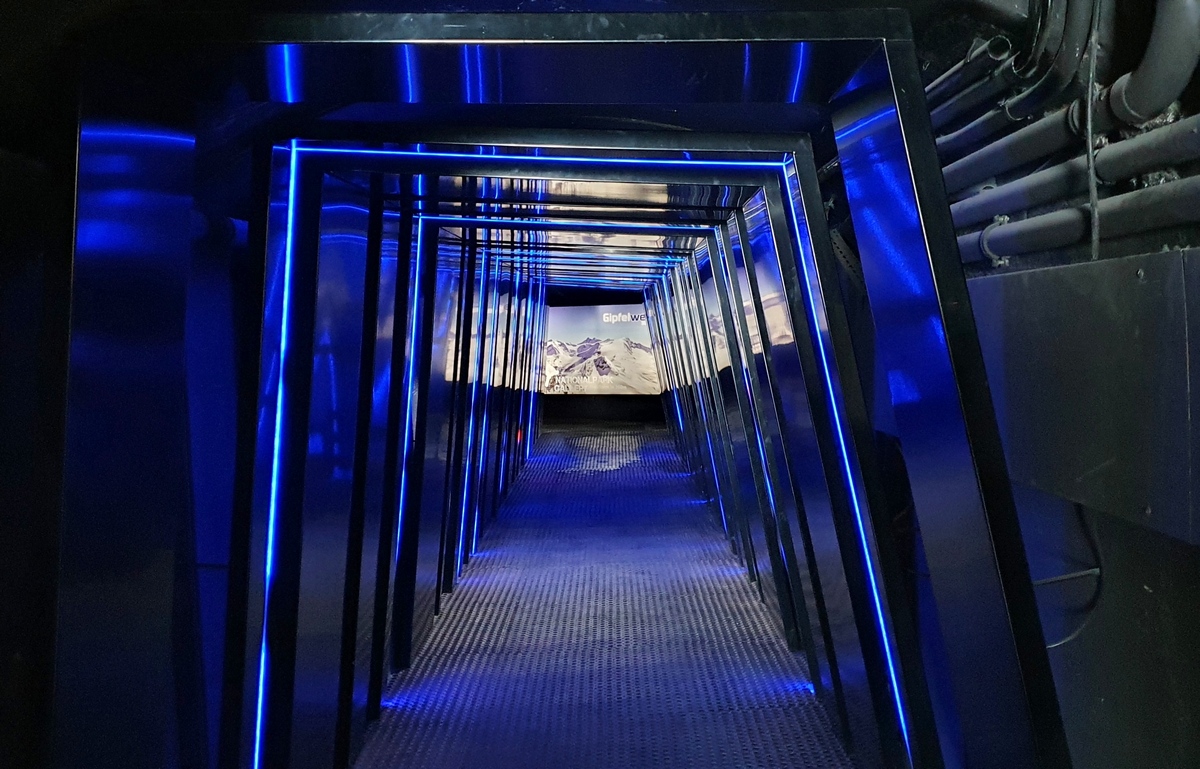 It is a 363-meter long tunnel, part of the Gallery of the Hohe Tauern National Park, where in six info-stops placed in illuminated alcoves visitors get acquainted with various interesting facts about the national park, such as how gold and silver were mined here (the biggest boom was in 15th and 16th centuries), about local deposits of crystal, but also emerald and epidote, about glaciers and permanently frozen earth, etc.

At the end of the tunnel, you emerge from the inside of the mountain at a viewing platform. Once again, you will have an amazing view (3,000 m above sea level), up to Austria’s highest peak Grossglockner – especially in such fantastic weather as we had. The Austrians call it Kaiserwetter – Emperor’s weather.

The snow-capped peaks of the mighty mountains without end and beginning shone in the midday sun, and suddenly you wanted to embrace all that beauty, even though a freezing wind blew at you, trying to snatch your cell phone from your hand and change your hairstyle into crazy shapes. 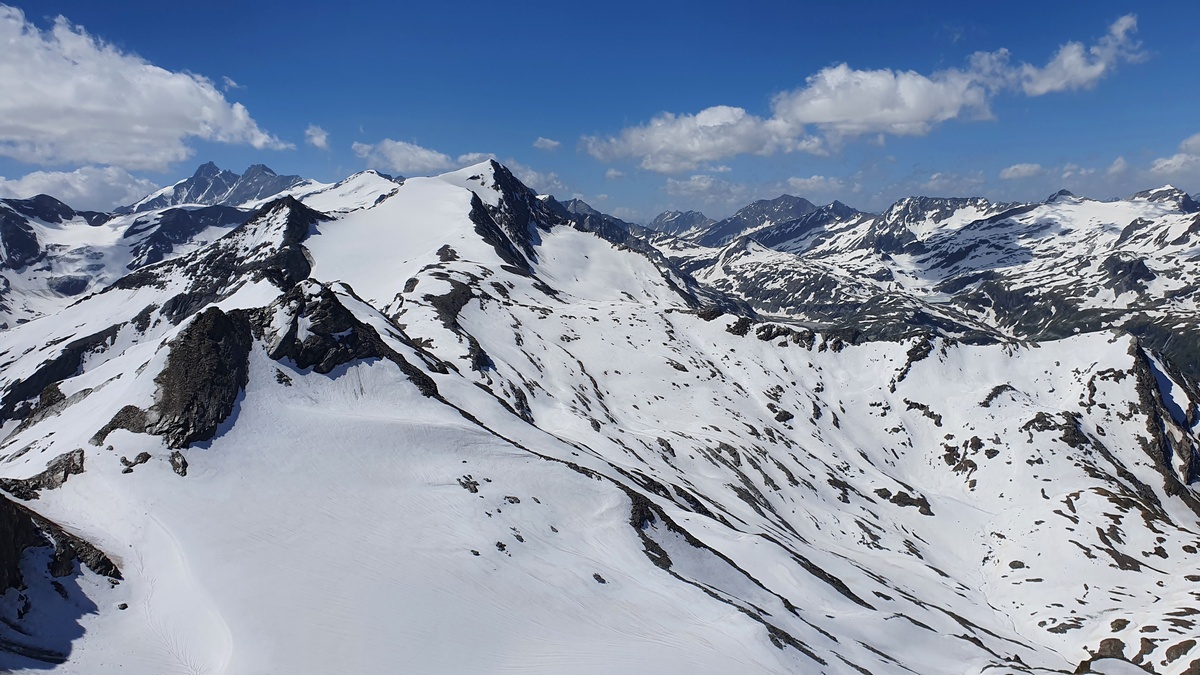 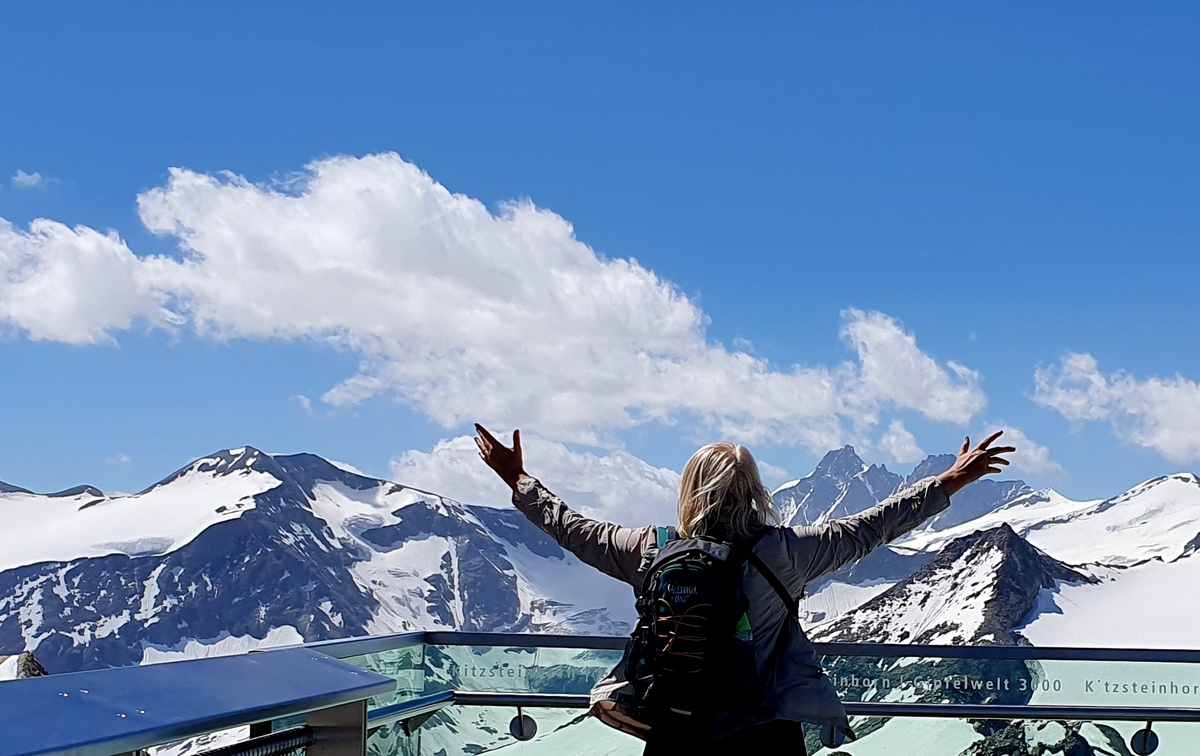 We returned through the tunnel to the upper station – it’s harder, you go uphill, the signs warn you to walk slowly at this altitude. If you are tired, make a stop at a large piece of crystal and draw the necessary energy from it. 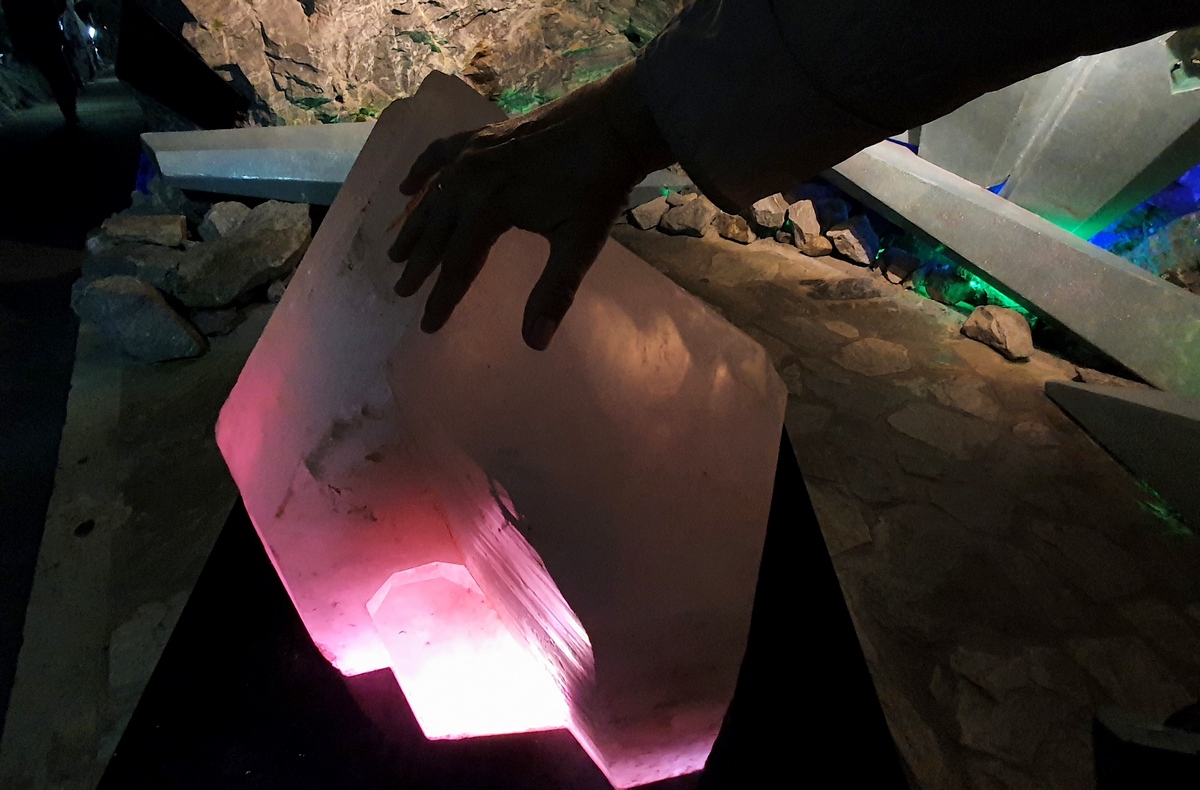 We returned to the Alpincenter, which, in the meantime, had come alive with skiers and visitors sunbathing in sunbeds, and then we took the cable cars back to the green valley. 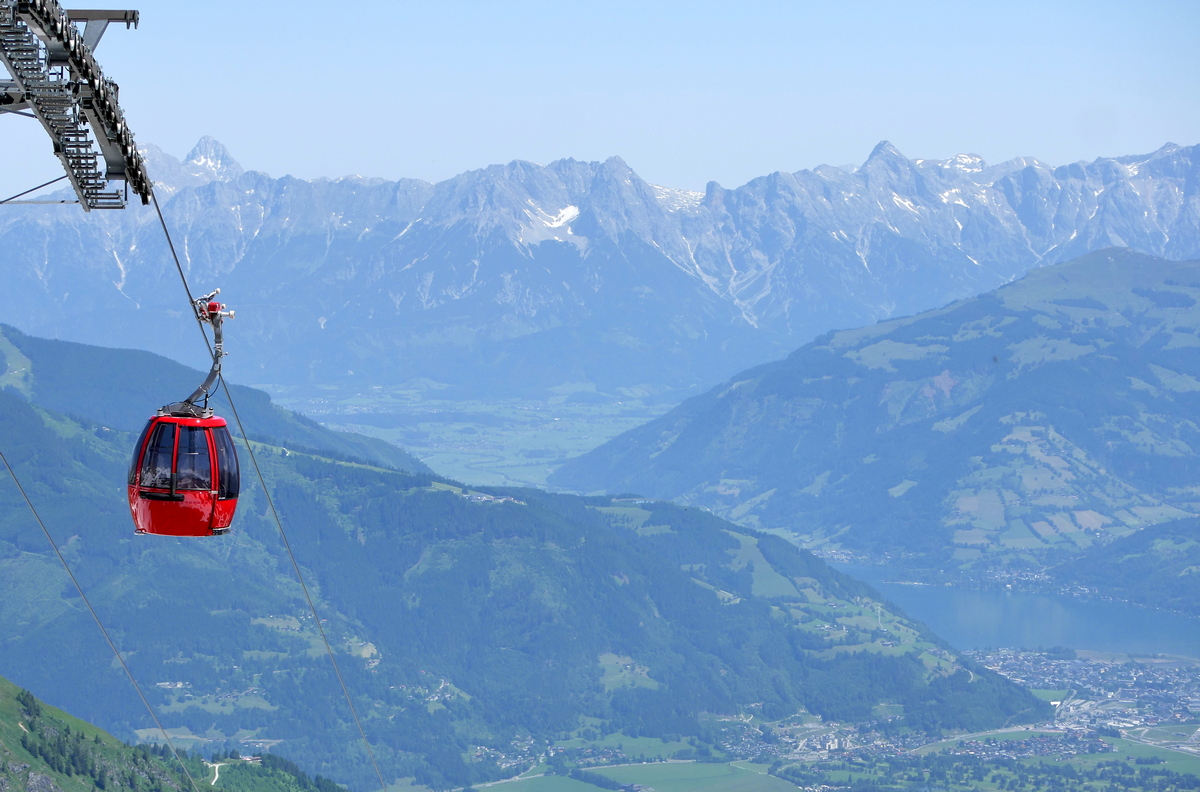 Summer Card – a combined ticket for natural and other attractions of the region, all cable cars, swimming facilities and local buses. Guests staying in partner companies receive it free of charge, the list of partners: here

How to get here:

From Vienna to Zell am See by car, you need about 4 hours. Guests staying in the region can use public transport for free. 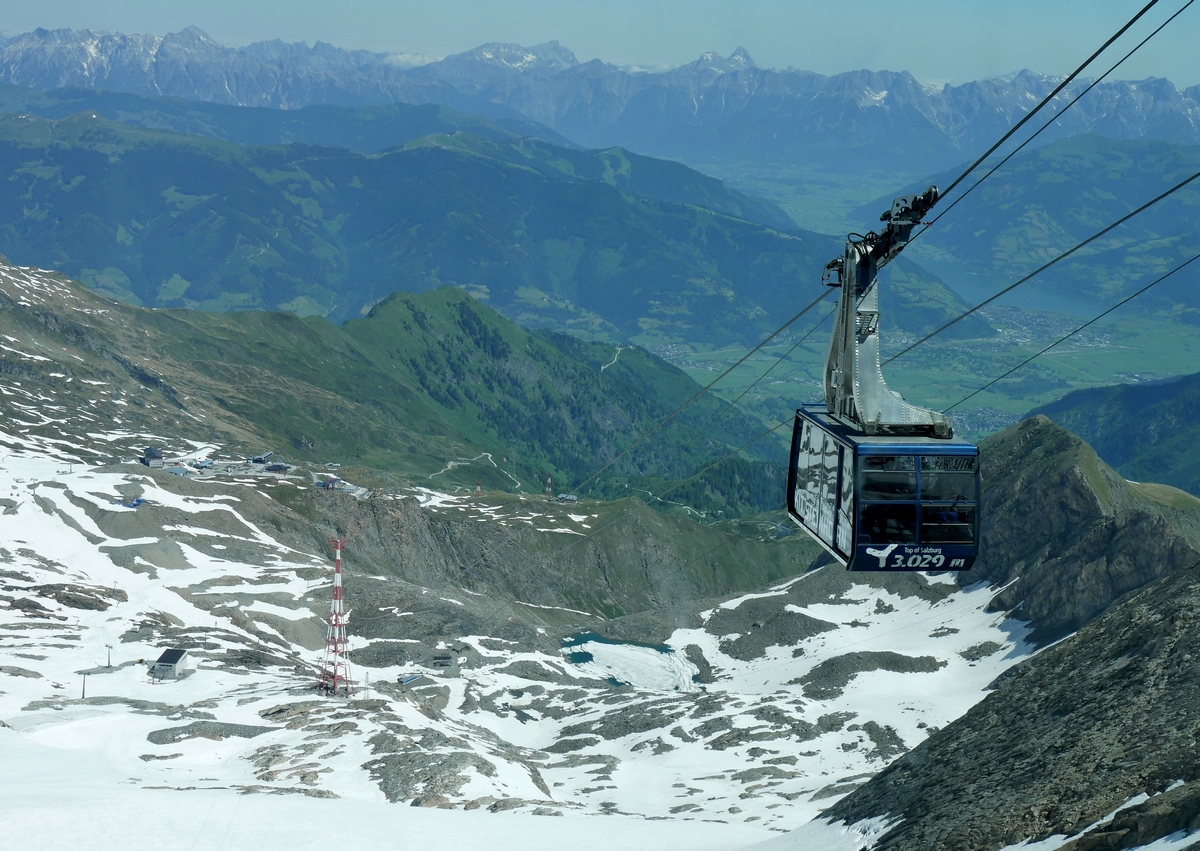 Thanks to SalzburgerLand and Zell am See-Kaprun for the invitation and for arranging this experience. 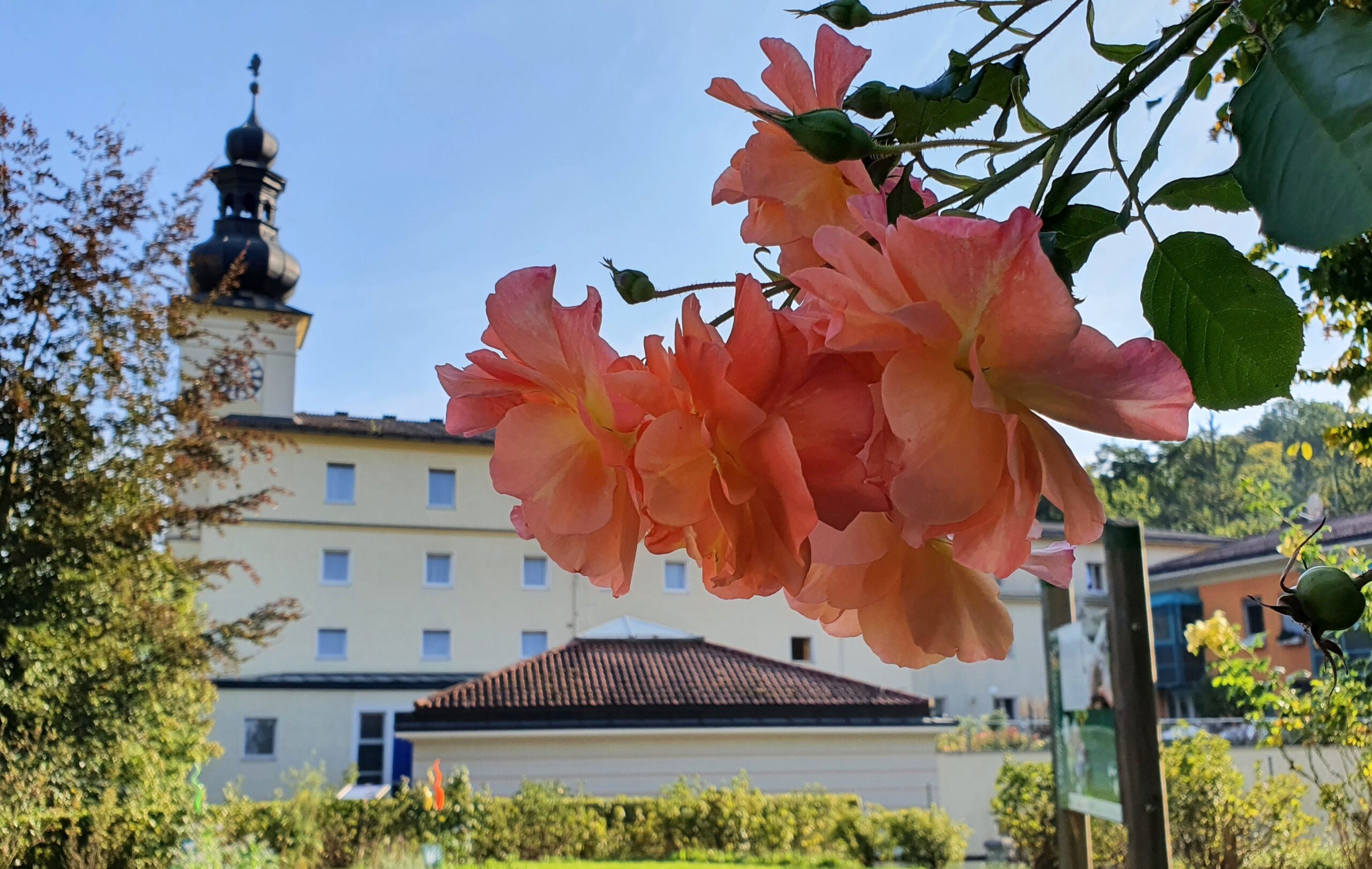 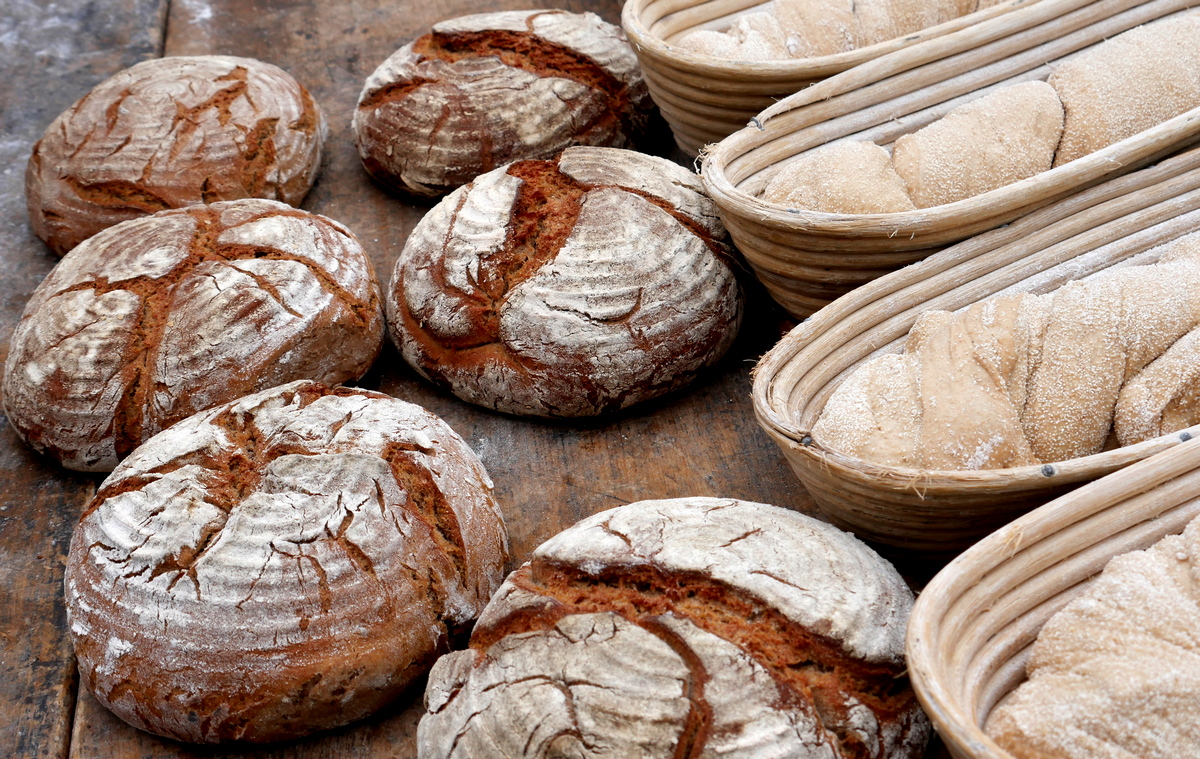