“I’m going to town,” says a Viennese, located outside the Ringstrasse, but still inside Vienna, and intends to go to the 1st district. “How is it possible?”, a stranger wonders as the person has already been in the city. This habit seems to have been preserved from the time when the visit of the inner city was connected with “crossing border”.

It is My Will

In the Middle Ages, the town was surrounded by the walls built by the Babenbergs in the 13th century. Along the walls, there was a strategic free area of 300 meters, the so-called glacis. It provided a clear view so that the approaching enemy could be spotted immediately. Although the city fortifications proved to be useful during the siege of Vienna by the Turks, they gradually lost their importance. When Napoleon marched into Vienna in 1805, the weathered walls would hardly survive his howitzers. Nevertheless, it still was not allowed to build at the glacis; in the summer it turned into a dusty wasteland and in rainy weather, it became a muddy slurry.

On December 25, 1857, the newspaper Wiener Zeitung surprised its readers with a letter from Emperor himself, which began with the legendary phrase: “Es ist meine Wille…” (It is my will). Emperor Franz Joseph I. informed about the city’s development plans – about the intentions to break down the useless walls and rebuild the area into a splendid street as Paris or Barcelona had already done long ago! From the very beginning of this project called Ringstrasse (Ring Boulevard), it was determined what should be built here: an opera house, an imperial archive, a library, a city command office, and also museums and galleries for the rich imperial collections, residential and rental houses, gardens and parks.

The Ringstrasse, which today many call the most beautiful boulevard in the world, was opened in 1865. The opera house was the first public building on this ring street.

An architectural competition was announced for its construction in which the project of two Austrian architects – Eduard van der Nüll and August Sicard, in the style of French Neo-Renaissance, won. The new building began its history on 25 May 1869 with the premiere of Mozart’s Don Giovanni opera which was attended by Emperor Franz Joseph I. and his beautiful Sisi. However, neither of the architects attended this opening night. The Viennese didn’t like the building. They thought the monumentality and dignity of the opera house were not shown enough. What happened? Based on the initial errors in the construction plans, the level of the Ringstrasse had to be raised, making the opera look like a “versunkene Kiste” – a sunken box, as the local people said.

Even the Emperor said that the opera was sitting somehow low. Eduard van der Nüll didn’t endure this mockery and committed suicide. His colleague August Sicard died of tuberculosis two months later. The Emperor was so shocked by the architect’s suicide that since then he always used to say the same at any opening ceremony: “It was nice, I was very pleased…”

The inhabitants of the capital of the monarchy have become accustomed over time, the opera has gradually built up its reputation. The greatest flourishing time was under the leadership of Gustav Mahler in 1897 – 1907 when a generation of singers was replaced and Mahler introduced various practical reforms. During World War II, the opera was still in operation. On June 30, 1944, the last performance before the summer break was played – Wagner’s opera Twilight of the Gods. No one at that time knew that the scenic remark about the hall falling apart in the flames of fire at the end of this musical work symbolically foresaw the future of this historic building.

The Fall and the Rebirth of the Opera

The new theatrical season was not opened any more, the propaganda minister Joseph Goebbels ordered to close all theaters on the territory of the Reich. However, there is more to it than that. On March 12, 1945, the US Air Force hit the opera house during a bomb attack that was originally intended for the Floridsdorf refinery. Only the front part of the building survived, which had already been bricked up for security reasons.

It means that only the main entrance, vestibule, staircase, imperial lounge and loggia with frescoes by Moritz von Schwind, depicting the scenes from Mozart’s Magic Flute, remained, while the other parts of the building, the auditorium, stage, backdrops, decorations and costumes were destroyed by the fire. After the war, long discussions were held, whether to demolish or reconstruct the damaged building. Finally, the reconstruction plan was carried through and the opera was restored to its near-original state.

Classical music from Fidelio by Ludwig van Beethoven resounded on November 5, 1955, just a few months after the Austrian State Independence Treaty was signed. So the process of restoring the sovereignty of this country had symbolically ended.

In the following year, Herbert von Karajan took over the leadership of the State Opera. He enforced the principle of performing operas in the original language (even now they play in six languages) but also began to engage the best opera singers from abroad. The Vienna Opera gradually gained an international character. As of now, the most famous opera stars such as Maria Callas, Luciano Pavarotti, Plácido Domingo and Anna Netrebko or conductors Rafael Kubelík, Igor Stravinskij or Leonard Bernstein have performed and still perform on its stage. Even Giuseppe Verdi had conducted several times here.

The Viennese may not even know that their opera house is one of the busiest institutions in the city. During ten months of the year, there are about 350 performances, every evening a different one is played. This means that right after the evening performance ends, the scene has to be disassembled. In the morning, they prepare the stage for the morning rehearsal. When this is finished they dismantle the backdrops and begin to prepare the stage for the evening performance!

In addition, there are rehearsals on other stages, ballerinas practice in their rehearsal rooms, castings are taking place in some other rooms while another staff prepares costumes, masks… What’s more, in the cellar, ice is produced which is used to cool the auditorium during summer heat!

1. On the official website of the Vienna State Opera in English, information about the program and tickets is available. You can also buy tickets at https://viennaoperatickets.com/

By the way, the Vienna State Opera is visited by 600,000 spectators annually, with 97% seat occupancy every year! 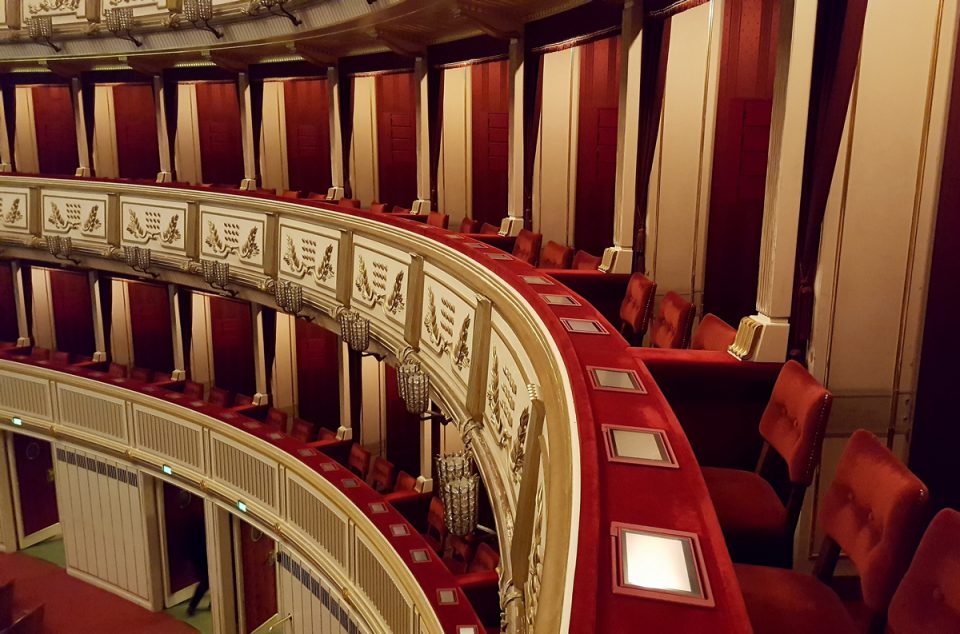 2. A large screen has been mounted on the side of the building towards the Kärtnerstrasse displaying around 50 operas and 20 ballets in the evenings from May to September. 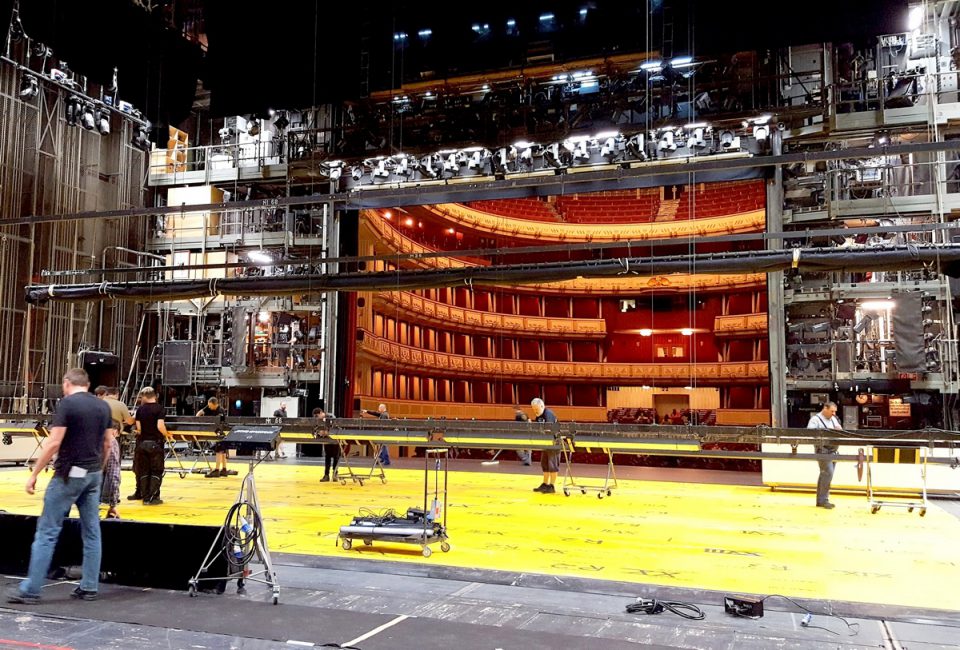 4. You can escape the rush in the Café Oper right in the opera house. With a cup of Viennese coffee, you can watch the ongoing performance on the TV screen.

Update 2020: Unfortunately, the management of the opera decided to enlarge the vestibule and closed the cafe. 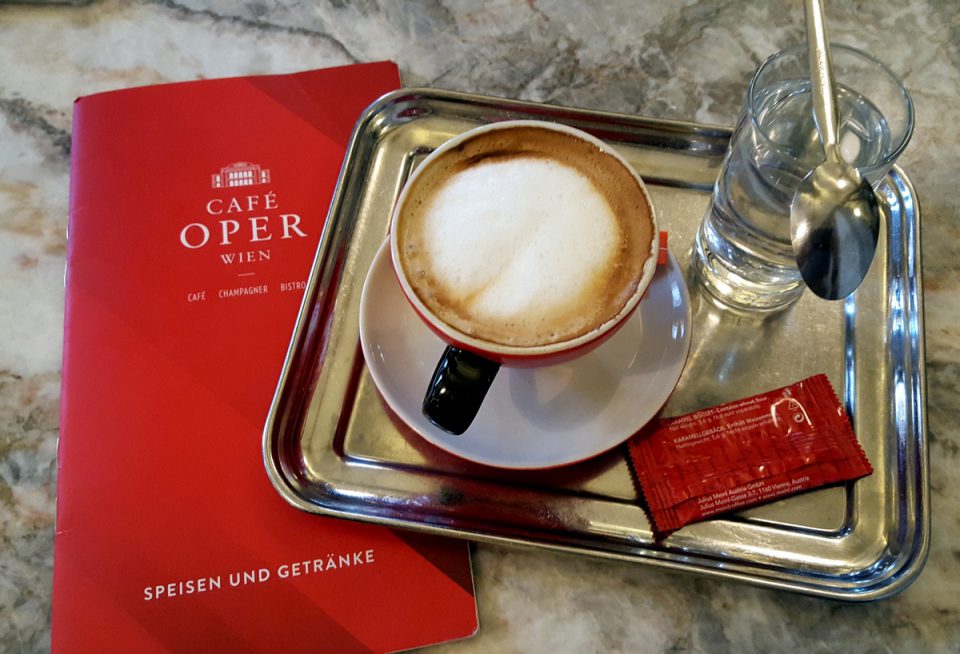 5. One of the prestigious events is the Opera Ball which is held every year on the last Thursday before Easter Lent. It is also a great challenge for the technical staff because the entire auditorium on the parterre must be dismantled and hidden in the space below. Read more about this event in my article: Three Best Ball Addresses in Vienna. 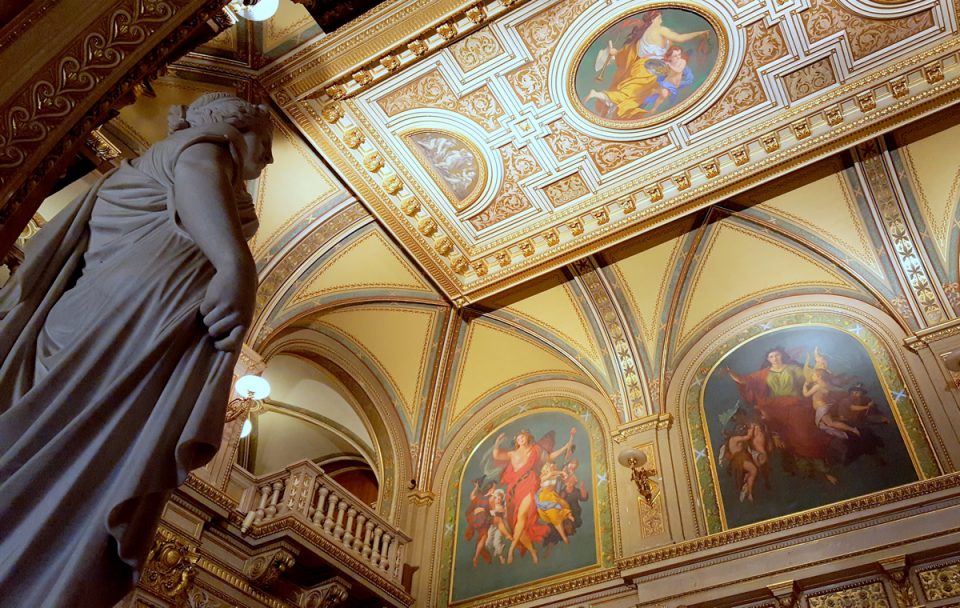 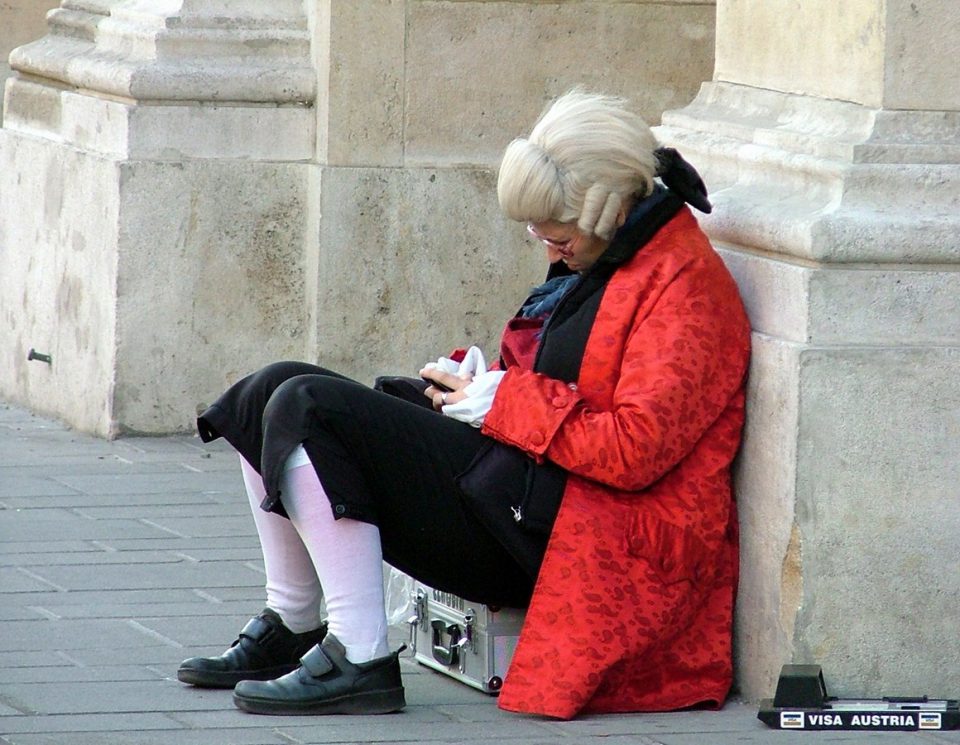 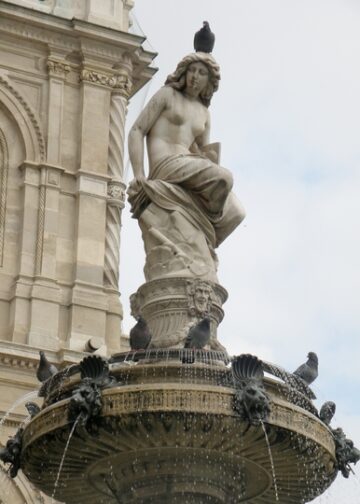 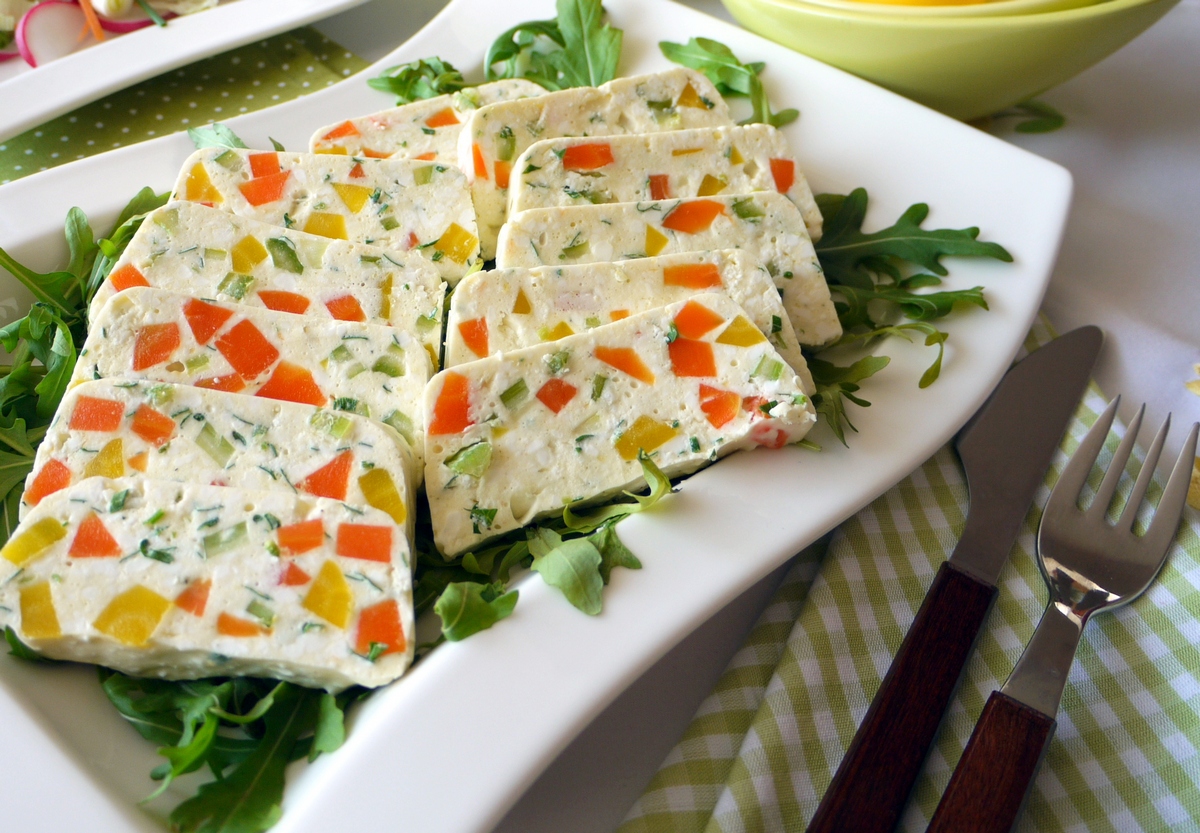 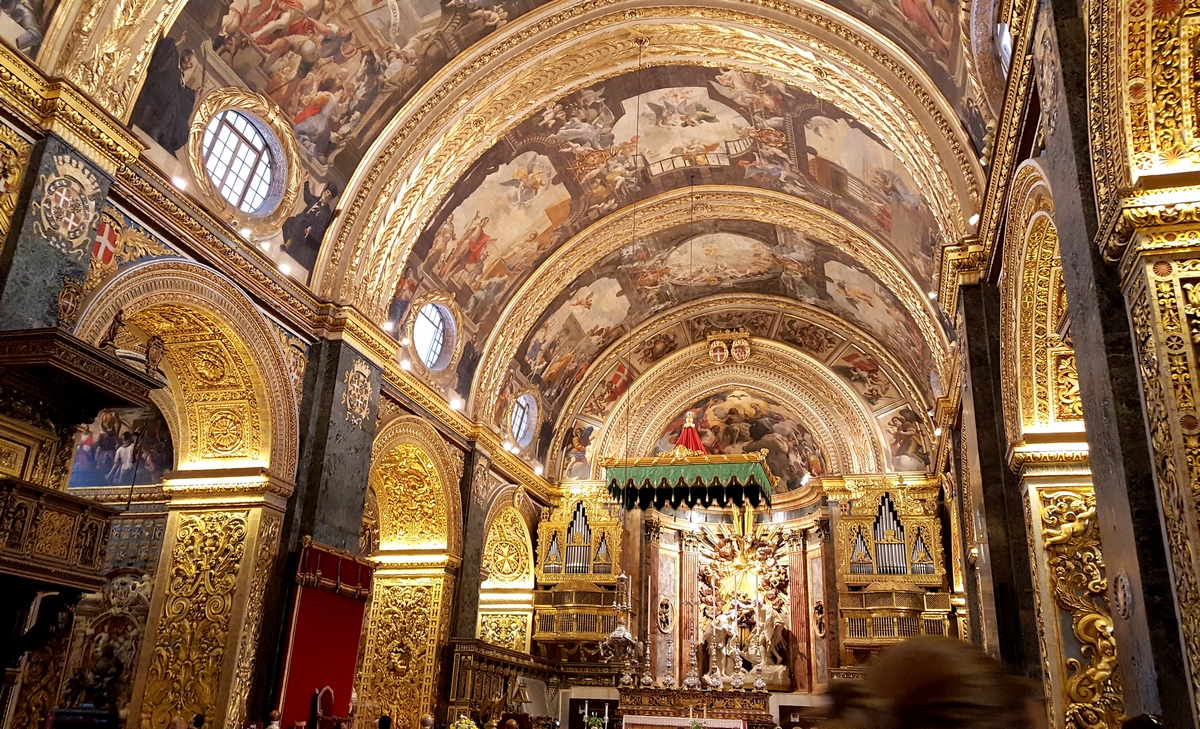 In the Shadow of Valletta's Churches