The place near St Stephen’s Cathedral is always crowded, but if you get there on 11th of November before noon, you might be in shock how much people are gathering there. It doesn’t matter whether it is a Sunday (like this year) or an ordinary workday.

11th of November is a very special day for Austrians. It is the beginning of a festive period of hilarity called Fasching. Austrians begin to buy carnival costumes and masks and prepare their evening dresses, dress suits and tuxedos. Shops are offering a much bigger amount of typical sweet pastries because the demand is also much higher. They are made of yeast dough and look like doughnuts without a hole. Austrians call them “Krapfen” and claim that they have invented them. Anyhow, I have already written about it in the blog.

The precise beginning of this crazy – as they say – fifth season is on the 11.11. at 11.11 o’clock. The number 11 is considered a number of fools. It is more than the 10 Commandments but less than the number of apostles or months of a year. However, it is possible that this date was chosen thanks to other, much more prosaic reasons. According to the agricultural calendar, 11th of November is considered the end of the farming year – the harvest is collected and mostly processed, even wine is already drinkable. The time has come not only to rest but also to have fun. 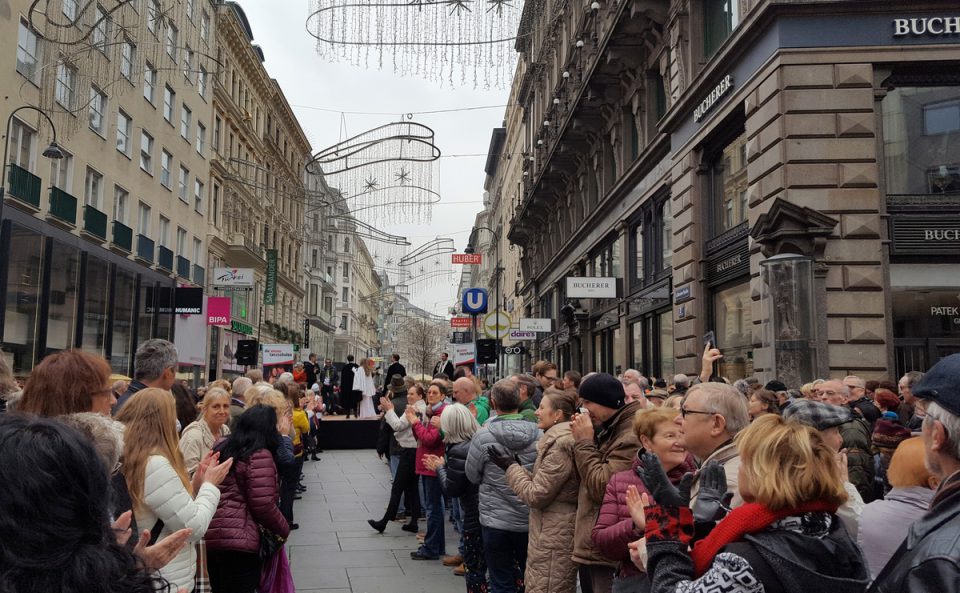 Viennese come to the square near St. Stephen’s Cathedral before 11. There is a small stage on one of the streets. Two dance experts and two couples from Viennese Dancing Schools are explaining and showing the steps and dancing figures of the quadrille, a traditional ball dance. 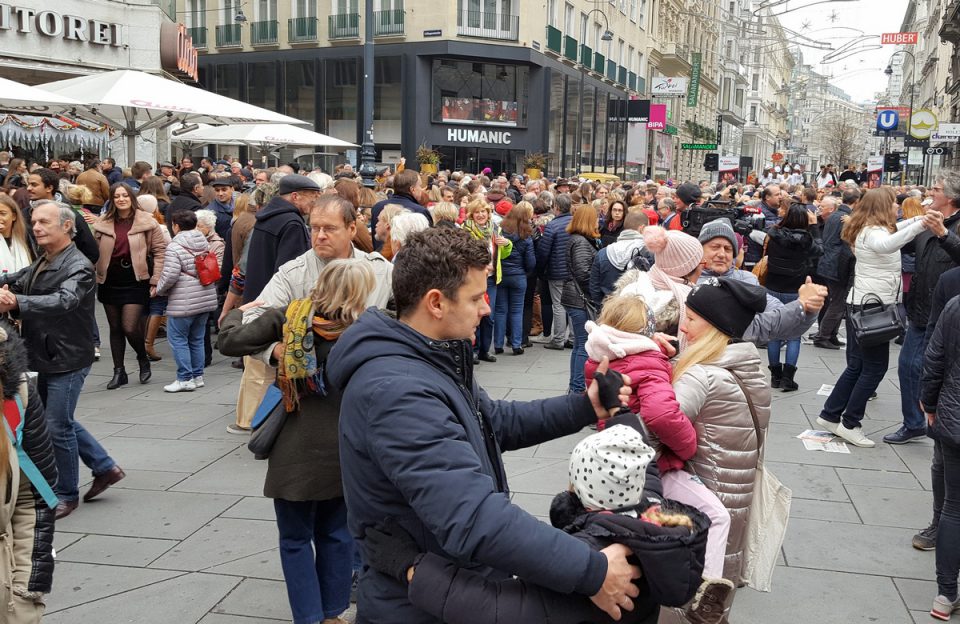 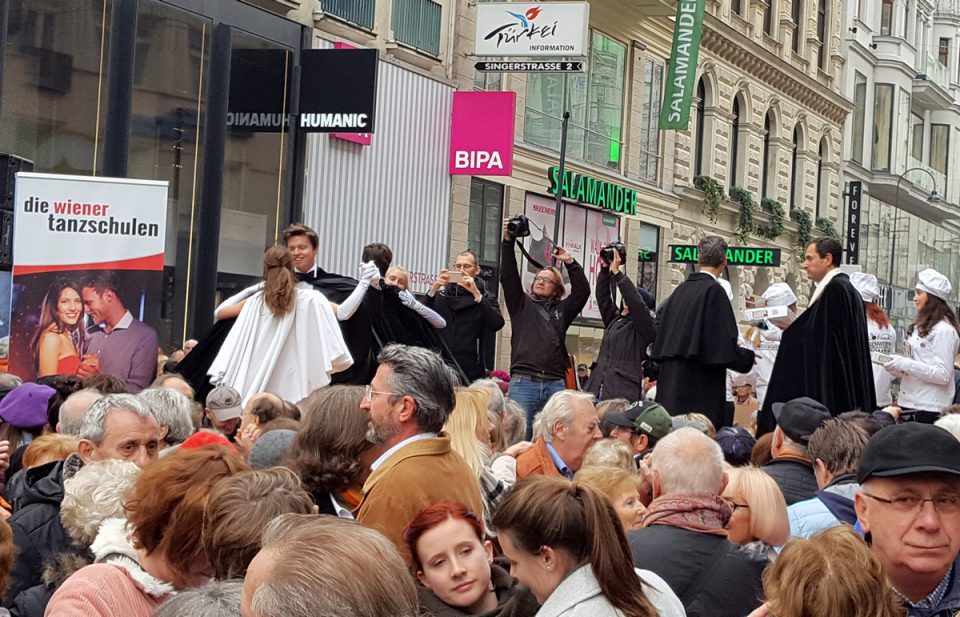 The pairs under the stage part in rows. When I arrived there, there were three long two-row rows reaching almost the Cathedral. All people – local ones, tourists or random passers-by, old or young, children or adults rehearsed the steps with vigour.

I moved a little bit further towards the Aida cake shop which every year on this day organizes a competition in Krapfen eating. There were already 11 small tables decorated with confetti. At the tables, there were 11 competitors drawn from more than 500 applications. 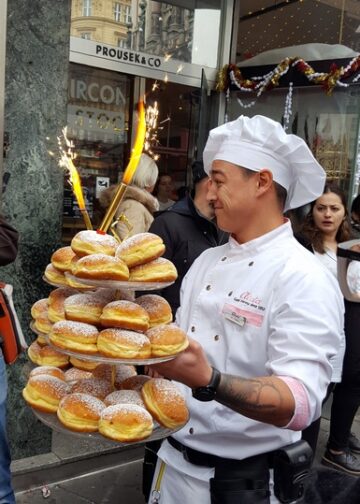 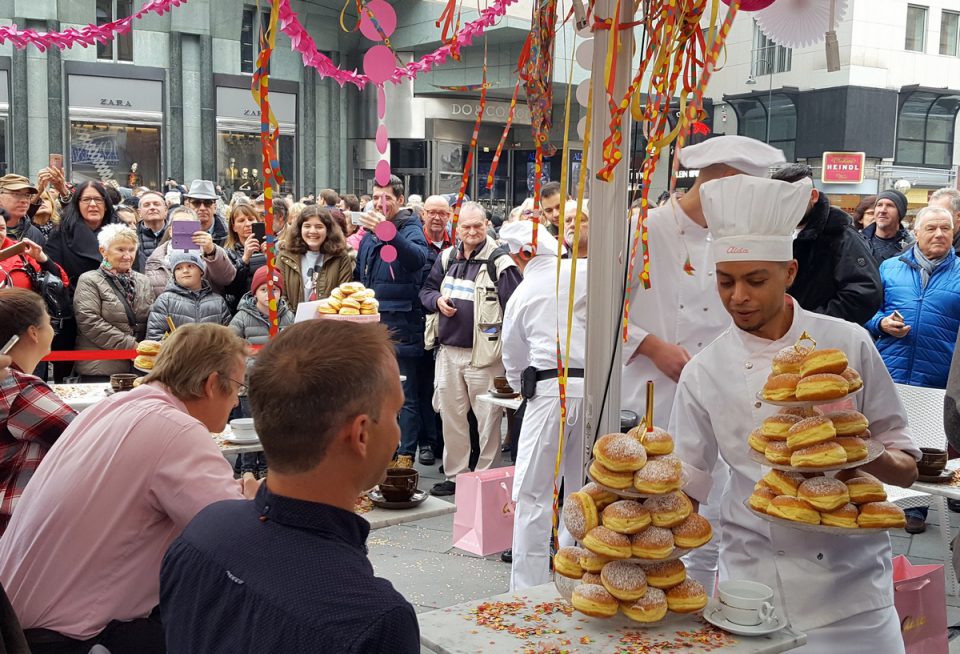 Shortly, the cooks from the cake shop brought huge pyramids of doughnuts and put them on the tables. There were 30 pretty big pieces on each of the pyramids, all filled with apricot marmalade and sprinkled with sugar powder. 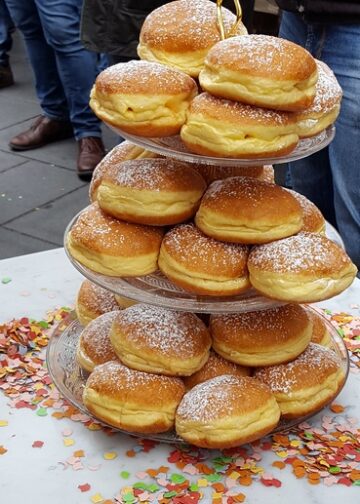 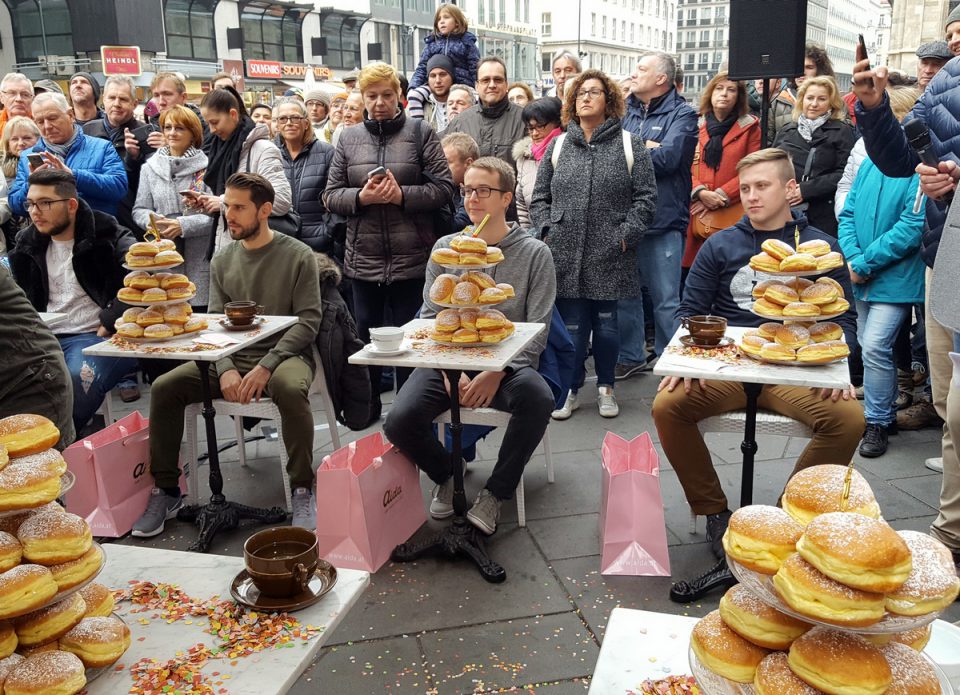 There was also TV-staff. At one moment, the presenter together with the dance master and actually with the whole crowd around started to count down the last seconds. Punctually, at 11:11:11 o’clock, the square turned into a huge open-air dancing room and the 11 competitors started to eat the sweet pastries. I expected them to swallow almost whole pieces but I have to say they were eating with elegance. Some competitors were enjoying their titbits eating them slowly while some others held a doughnut in one hand and taking a selfie with the other hand. 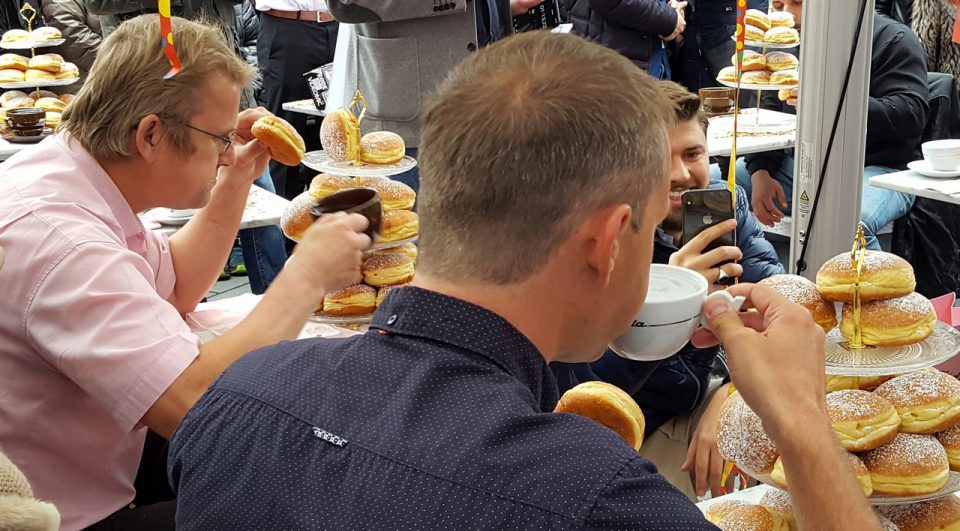 There were also cups with water on the tables to wash down the sweet bites. One man even started to dip the doughnuts in water to enable them to slide easily down his throat. Behind the competitors, their family, friends and also strange onlookers jammed and took pictures or videos of the funny event while the crowd in the background was moving in a dancing passion. After the quadrille, they danced the waltz and galop. 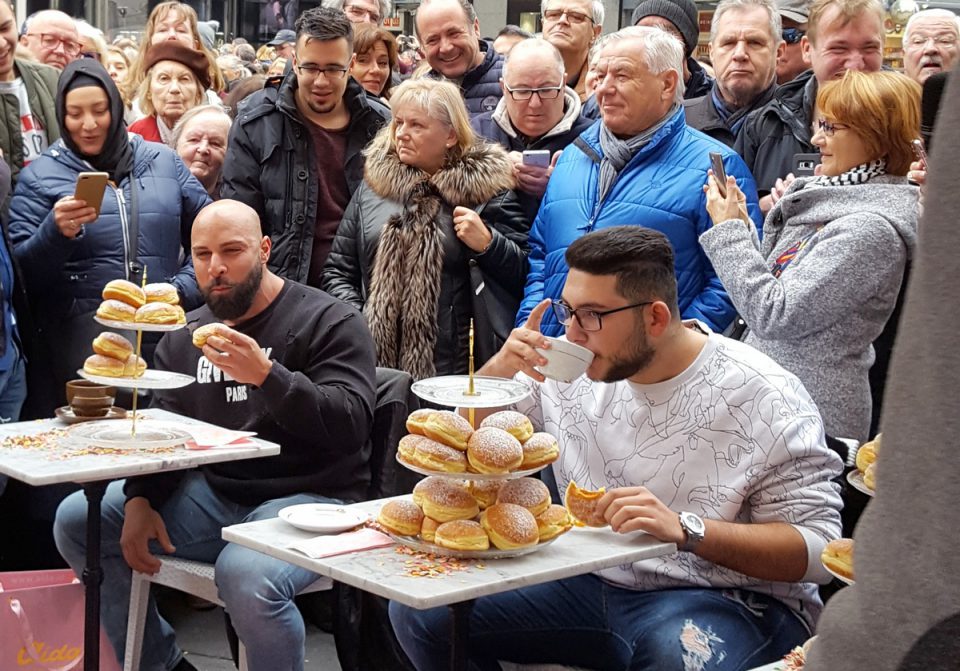 The front-runner had already been clear in the 7th minute. His plates were getting empty while the other competitors still had their pyramids almost full. The 27-year-old Samer ate 27 doughnuts in 7 minutes! 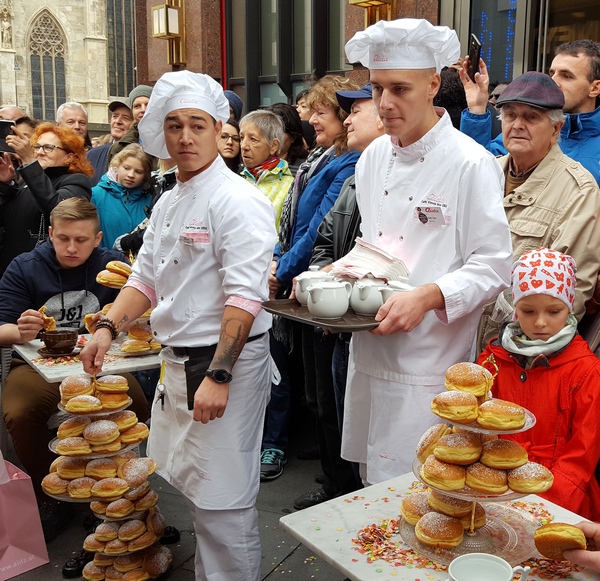 The bakers from Aida were well prepared. They had still enough doughnuts in reserve. But no one except Samer managed to get to the second pyramid of the pastries.

The competition took 11 minutes and 11 seconds. Samer consumed 33 doughnuts! He was rewarded with a check of 1.111 euro from Aida. And what can he buy for that? Much more doughnuts! 🙂 But don’t worry, Aida is a well-known Viennese cake shop which offers many more sweet temptations. 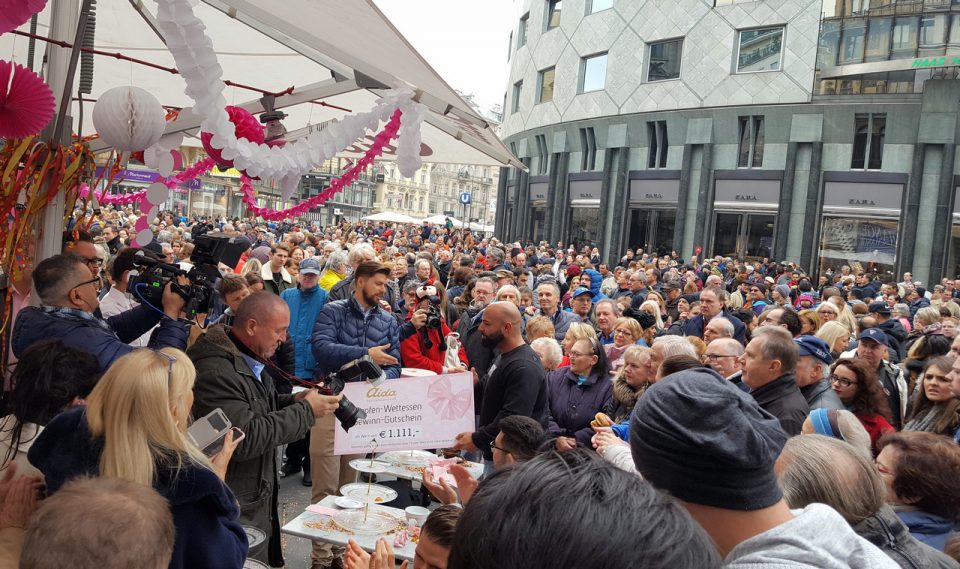 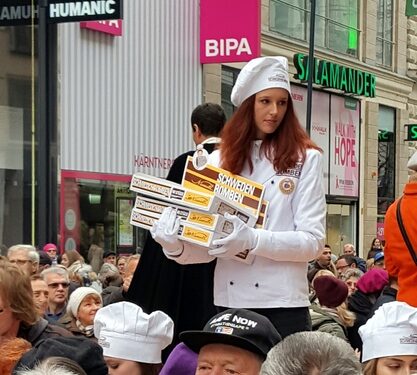 Don’t worry, these are not weapons of mass destruction but another Austrian sweet invention. Their inventor, the young confectioner Walter Niemetz was on a trip to Sweden when he got the idea to produce this sweet goody made of sugar foam. Today, the company produces about 100 million of them every year! They are very popular and people were really pushing hard to get one… 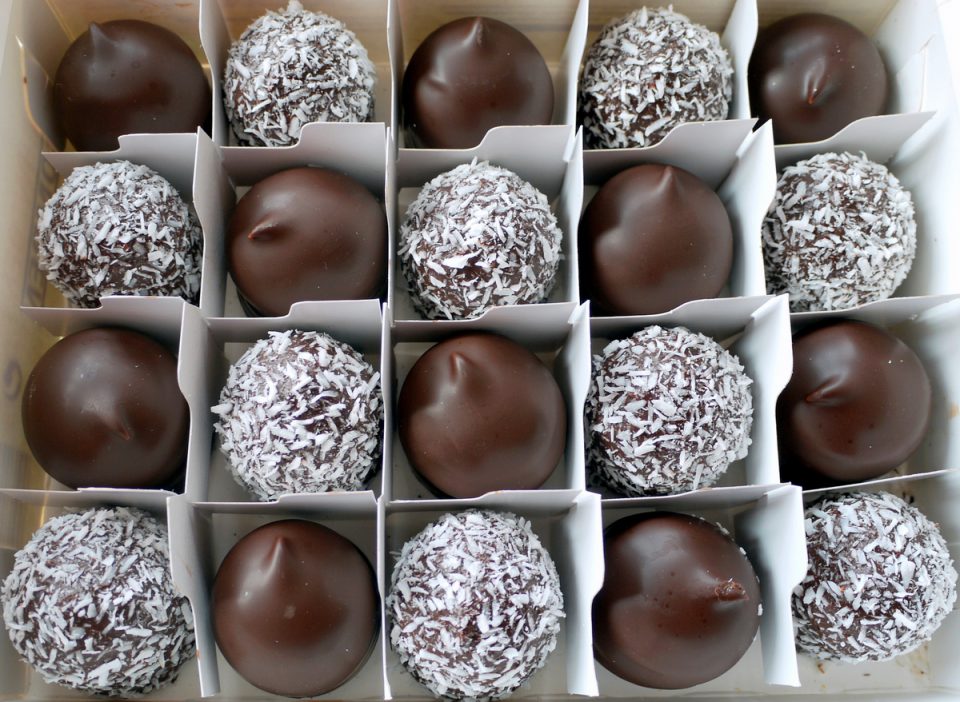 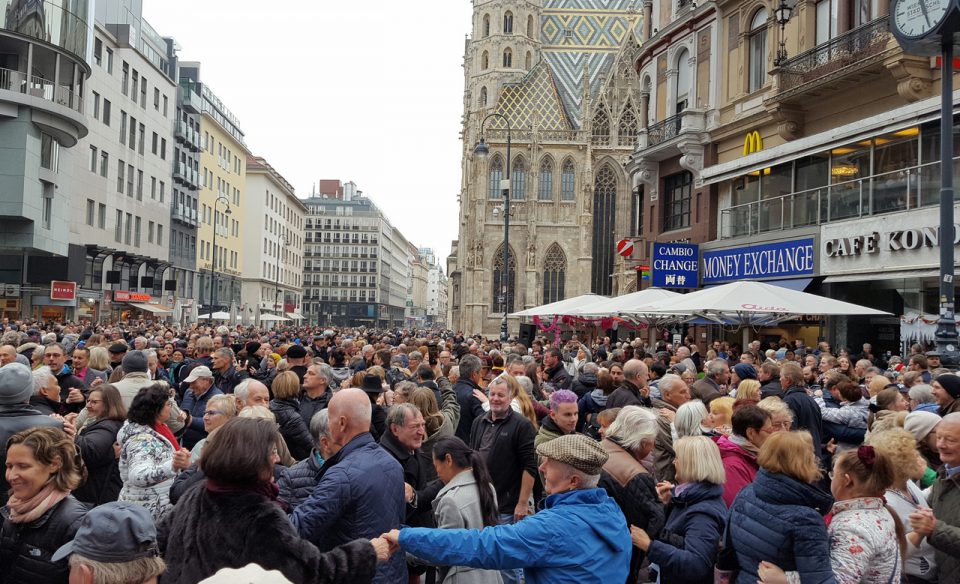 Many people didn’t want to go home yet, they continued dancing at the waltz pace or put masks on their faces and clinked small bottles of sparkling wine… The funny period of “Fasching” has started and the ball season was opened. It will continue until the Tuesday before Ash Wednesday. During this period, about 450 balls will be organized in Vienna! 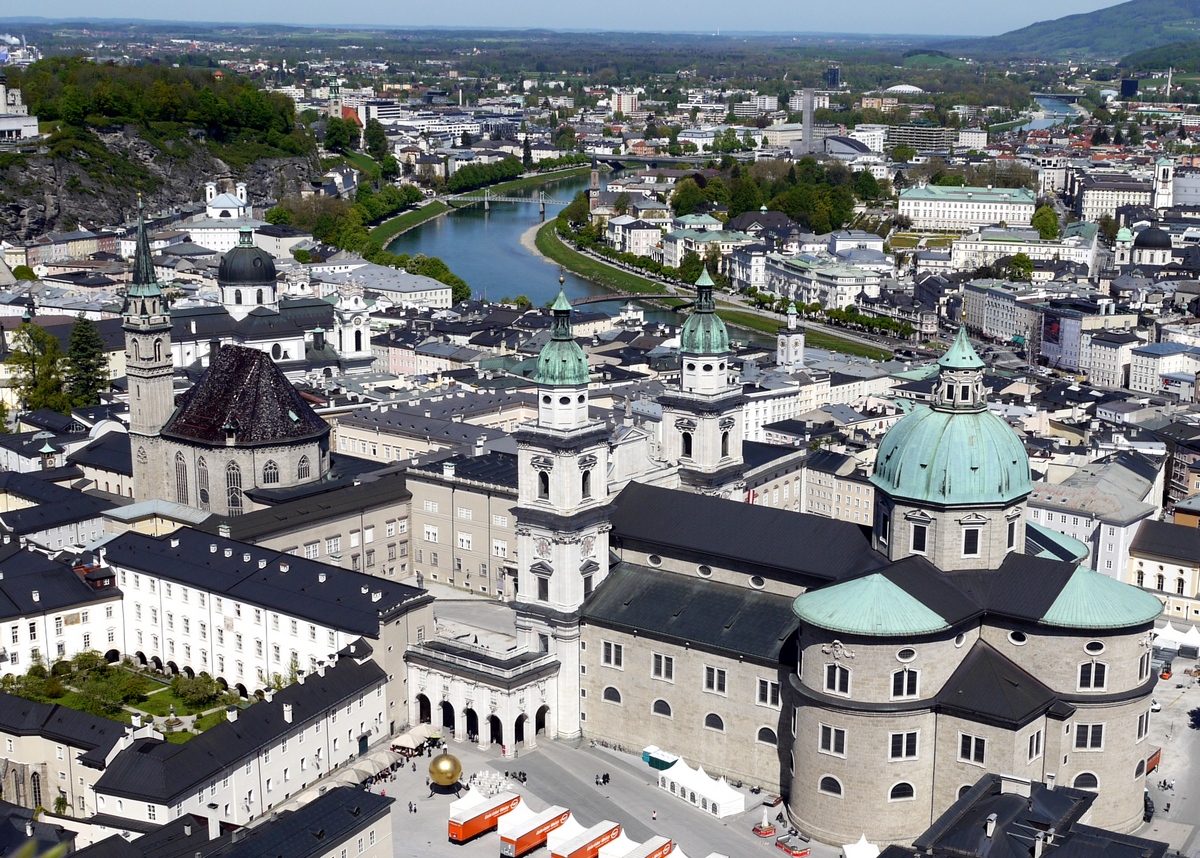 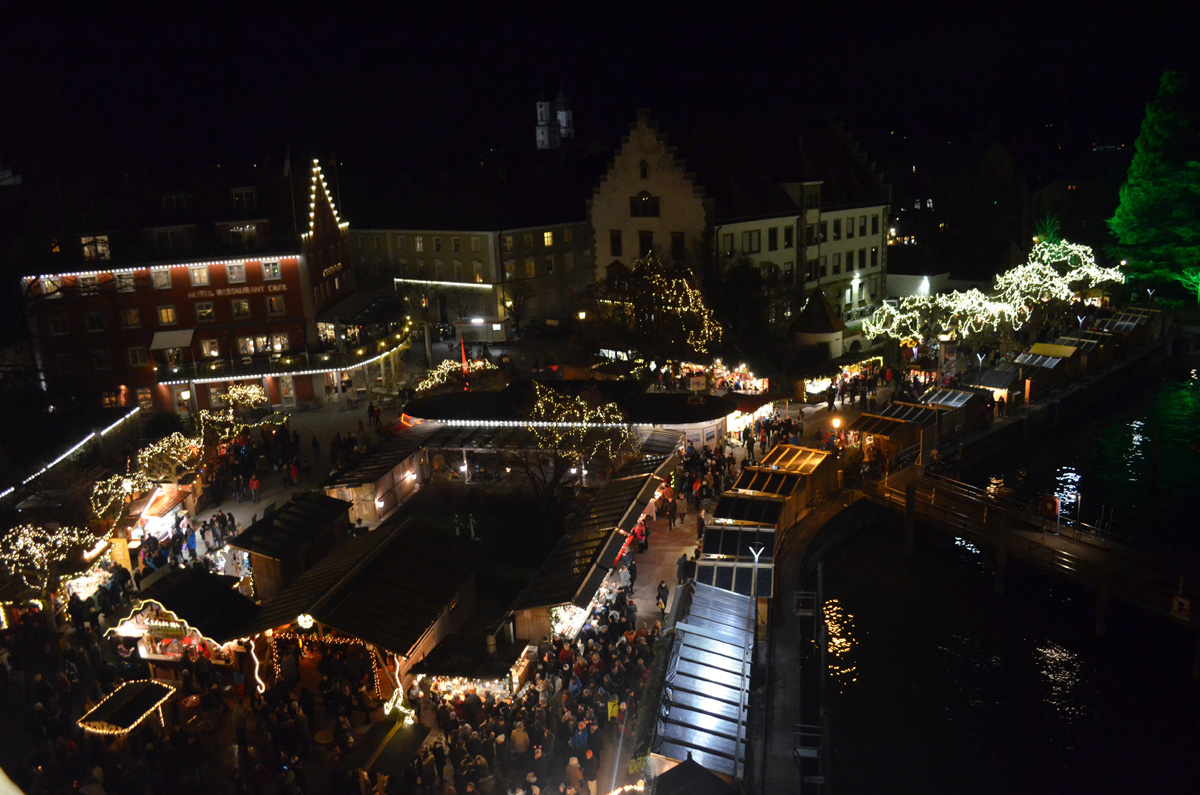