I have to confess that even in my mother language, I had never heard of musk oxen before our trip to Norway. If you want to observe them in their natural habitat, you have to visit the National Park Dovrefjell. Near the parking at Tverfjellet, we could already see a model of that big ruminant animal. 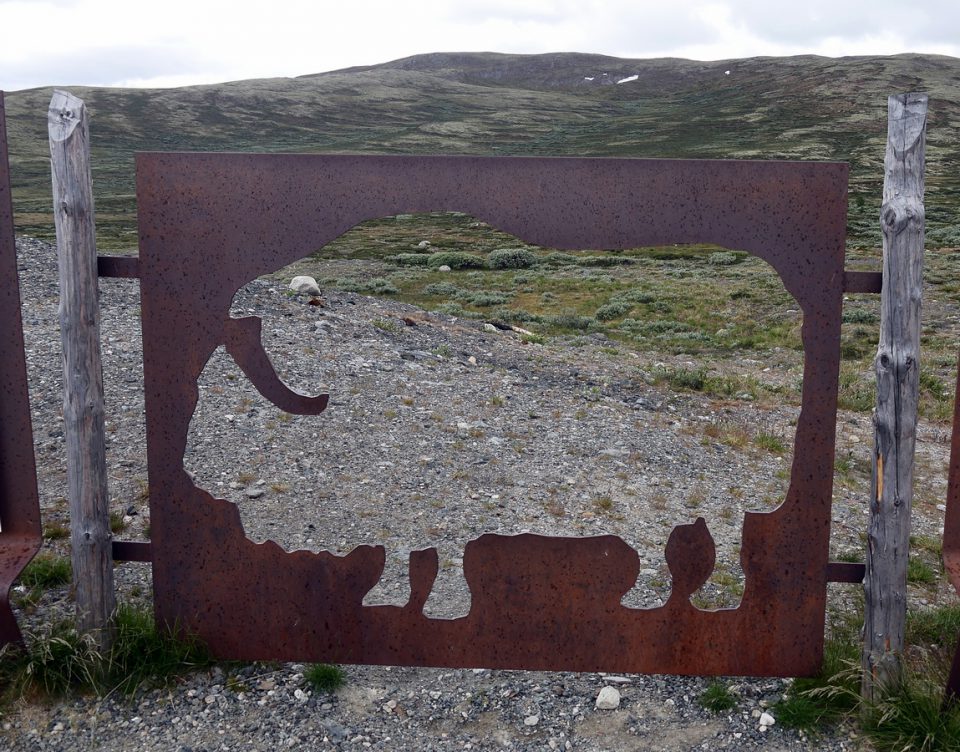 We walked up a 1,5 km gravel path. All around, there was just a raw plain landscape where we were a very easy target for the wind which became much stronger every minute. 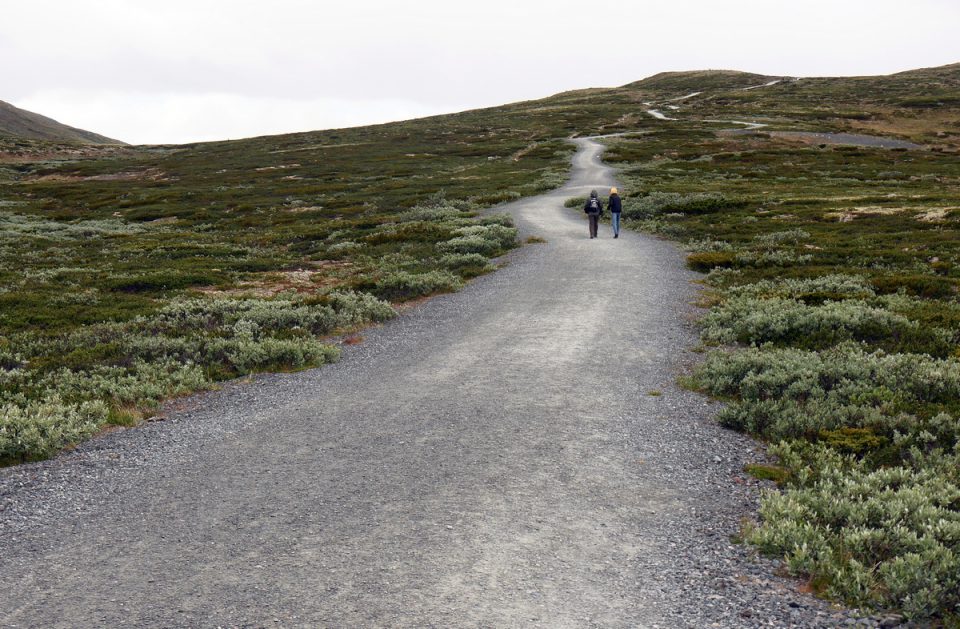 There were no trees, just small shrubs with cream-coloured flowers covered with a fine fluff protecting the plant from the cold. It wasn’t easy to take a picture of them, the wind was bending them in all directions. We also wrapped ourselves into our scarfs, put caps on our heads and rolled up the collars. It was the second half of June, but I wouldn’t have rejected gloves either! 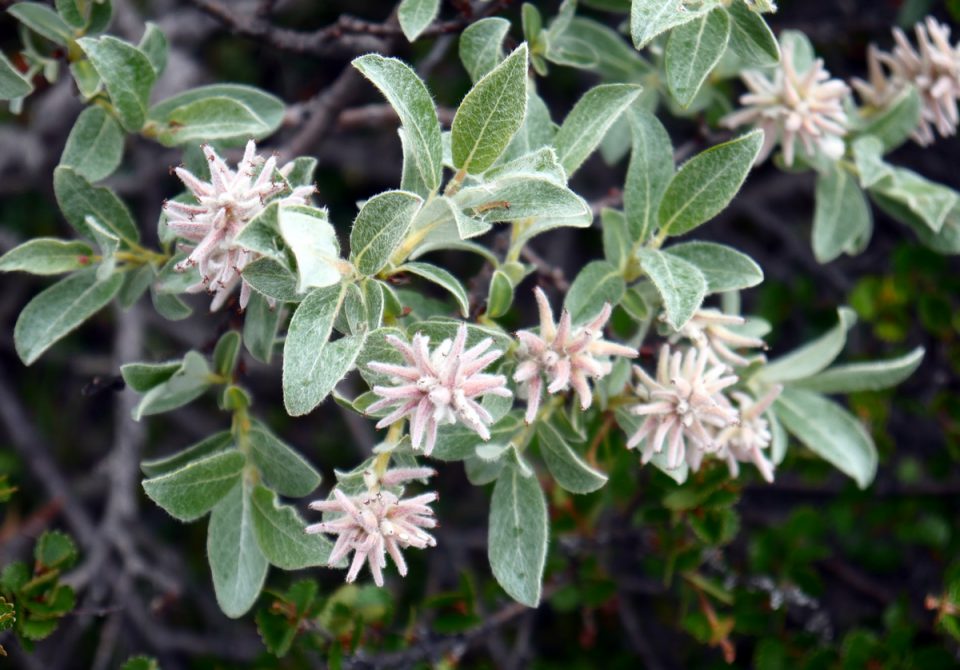 Ducking our heads to avoid the unfriendly wind, which threw frozen snow into our faces, at least we could better see a series of stone slabs which tell the history of this region over the last 10,000 years. 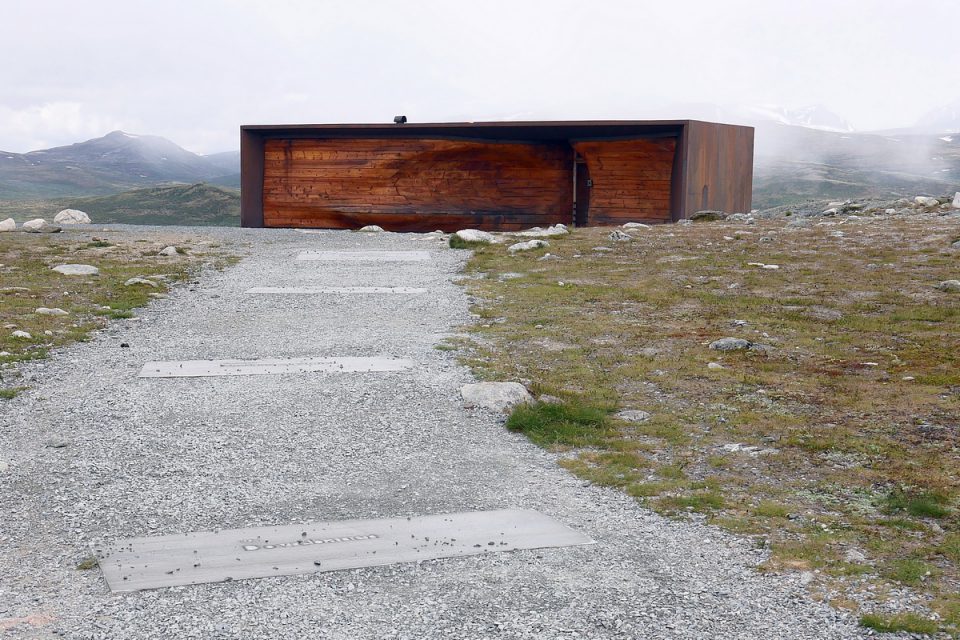 However, the big “rusty box” also attracted our attention. At first sight, it looked like a forgotten container. If the weather had been better, behind the “box”, we could have seen the Dovrefjell mountain range – a barrier between the Northern and Southern parts of Norway – with Snøhetta, the highest peak (2,286 m above the sea level). However, the sky was covered with a heavy curtain of clouds which only from time to time revealed at least something from the natural props. 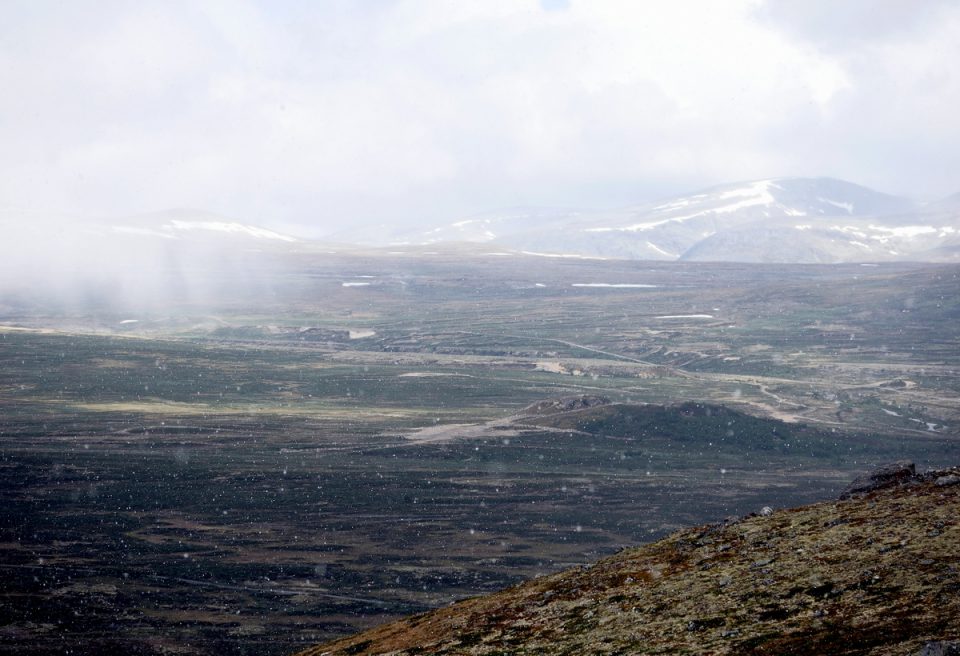 Suddenly, I remembered where I had heard the word Snøhetta already. It is also the name of the architectural company which designed the new modern building of the Norwegian National Opera in Oslo! 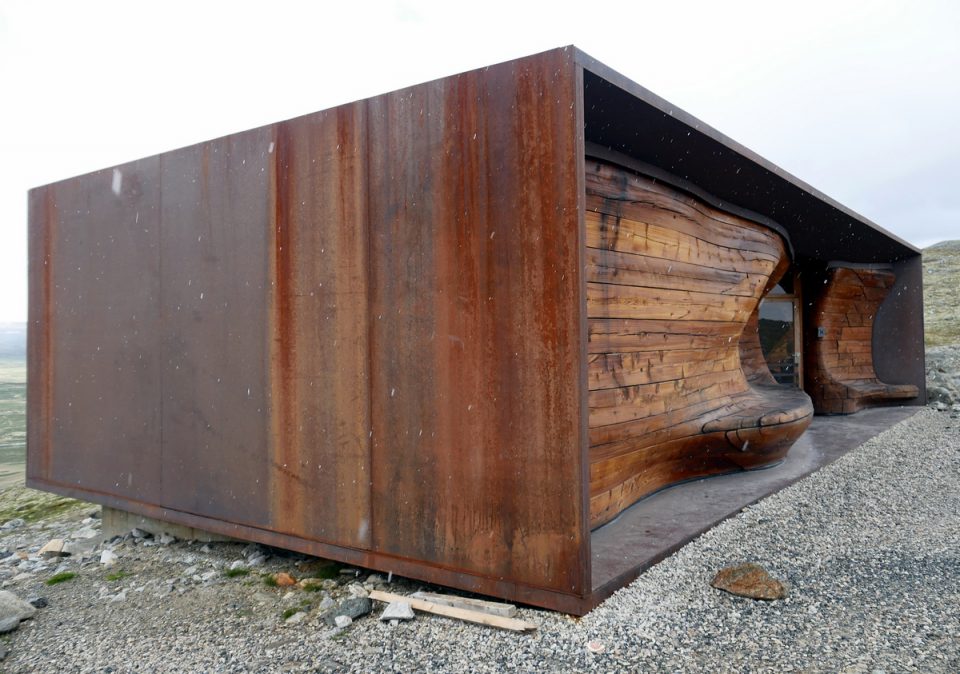 The unique building with a rectangular frame of corten steel was also designed by the Snøhetta architects. Its front wall is made of glass offering an amazing view, of course, if the weather cooperates with you. 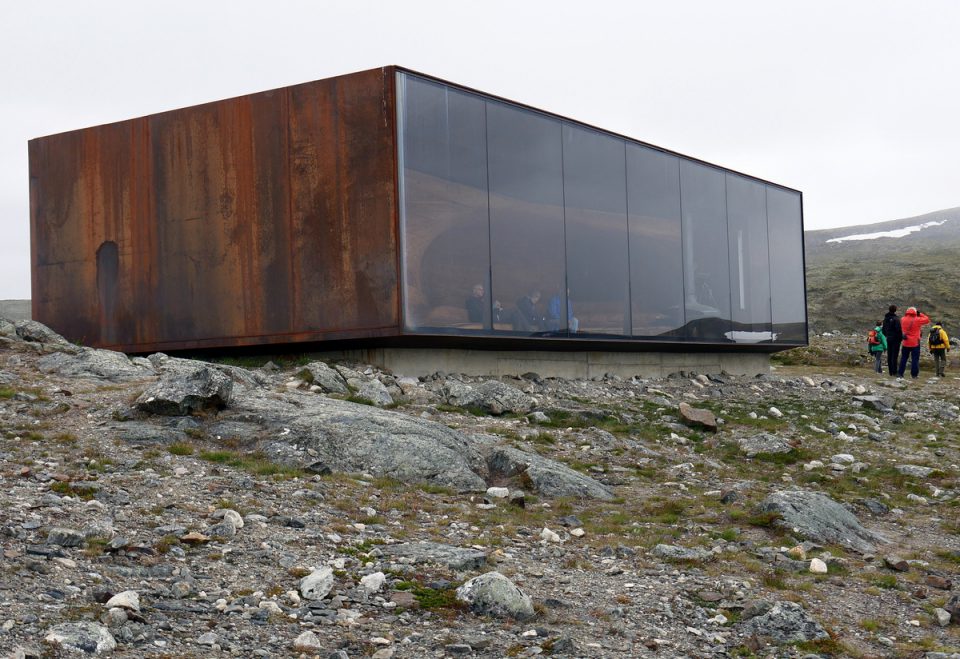 Entering the building, you will understand the simple beauty of this construction. The wooden interior should remind of a natural form eroded by natural forces like wind and water. A suspended furnace completes the cosy atmosphere. Actually, the viewpoint building offers two things like a real home – warmth and protection. It was rewarded with several international awards and was named the World Building of the Year 2011. Since then it is open to the public, although only in June – October. 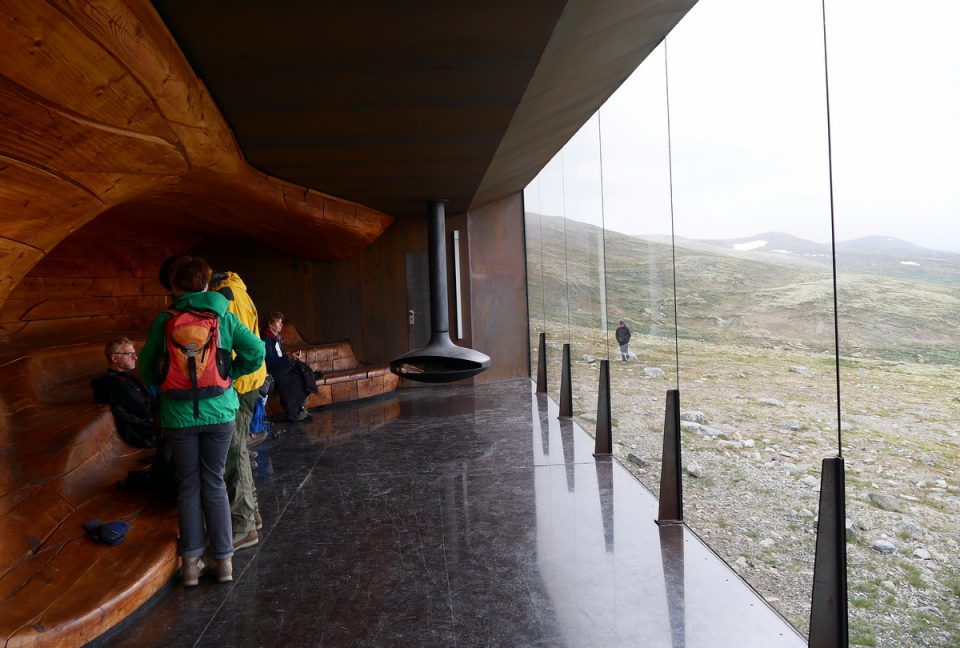 From this viewpoint, you can observe not only the mountains but also the musk ox. The animals were imported here from Greenland in the fifties of the 20th century and became assimilated very well. Today, this is the only place in Europe where they live in their natural habitat. If you plan to visit the place, don’t forget to take your binoculars with you. Everywhere, you can read that the recommended distance is at least 200 m. We were safe, the musk oxen were far. We didn’t disturb them and they didn’t disturb us.

Without binoculars, they could be only hardly spotted. However, even from this long distance, their body size earned our respect (their weight can be up to 400 kg!). We could see their woolly brown coats, long curved horns and short legs. They were grazing peacefully on the hill opposite of us, we could see a family with two youngs and also two other individual animals. The distance was too big to take good pictures but at least you can see this symbolic collage of what we could see. 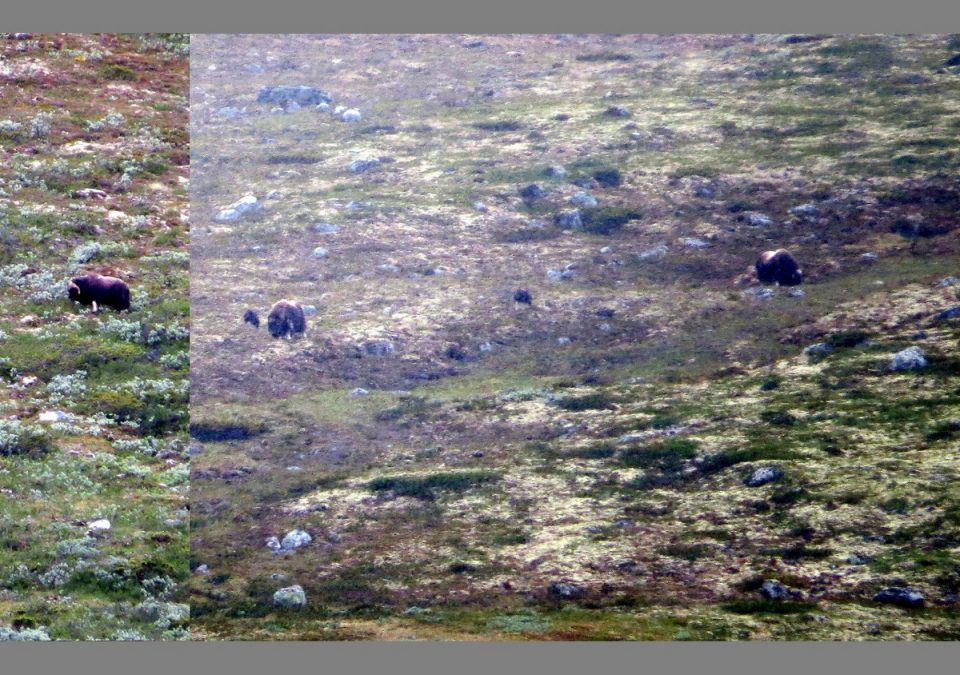 If you are more interested in these animals, then you can order a four-hour-safari here: www.moskussafari.no and watch them and take pictures from a much better distance. 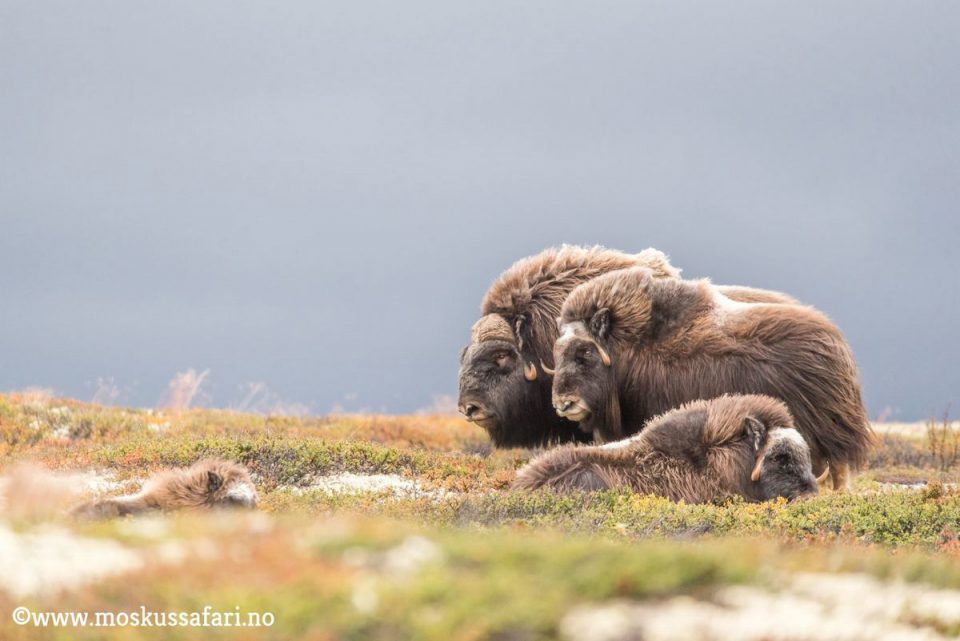 Despite the bad weather, the place had its magic and I recommend to visit it. The National Park Dovrefjell is also home to Europe’s last wild reindeer herds. We weren‘t able to see any. However, we had wished very much to meet a moose (elk) in Norway. After all, when you come to this country, almost immediately, you will see the traffic signs with the symbol of that king of Norwegian forests. 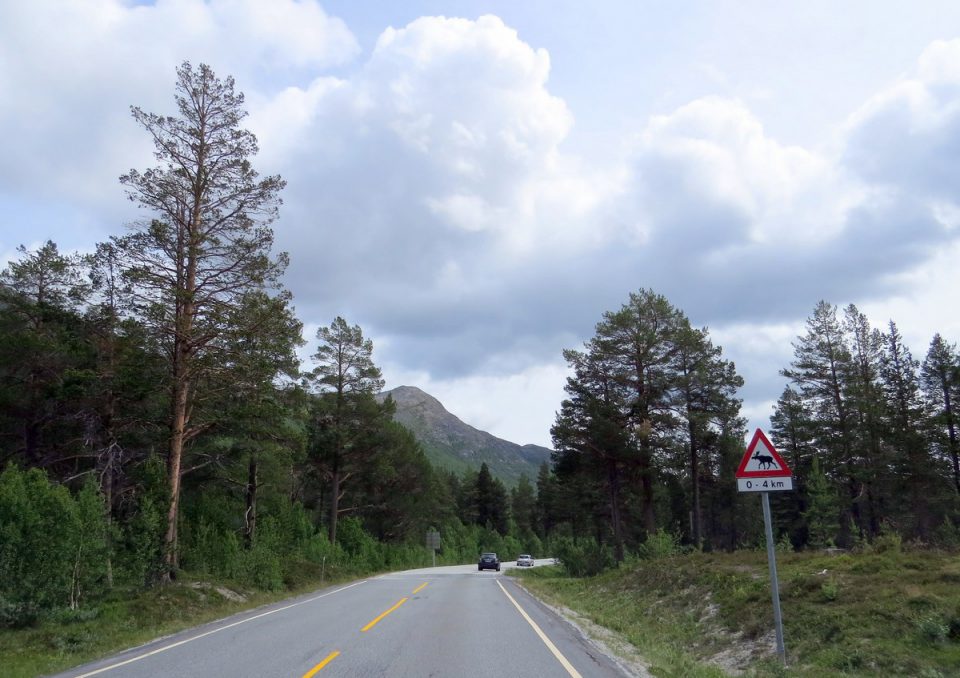 The optimistic hole in the sky was very promising, we hoped for better weather… 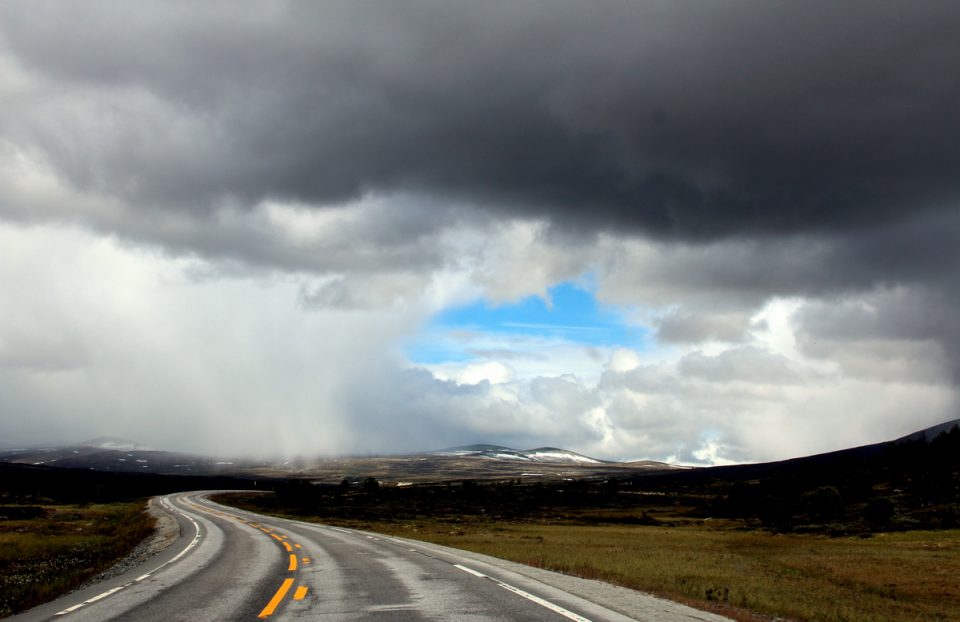 In several guidebooks, we had found the information that you could most likely meet a moose in the region between Tynset and Elverum so we decided to follow that road. First, we saw an elk in the Holmenkollen Museum in Oslo so we exactly knew what we were looking for. 🙂 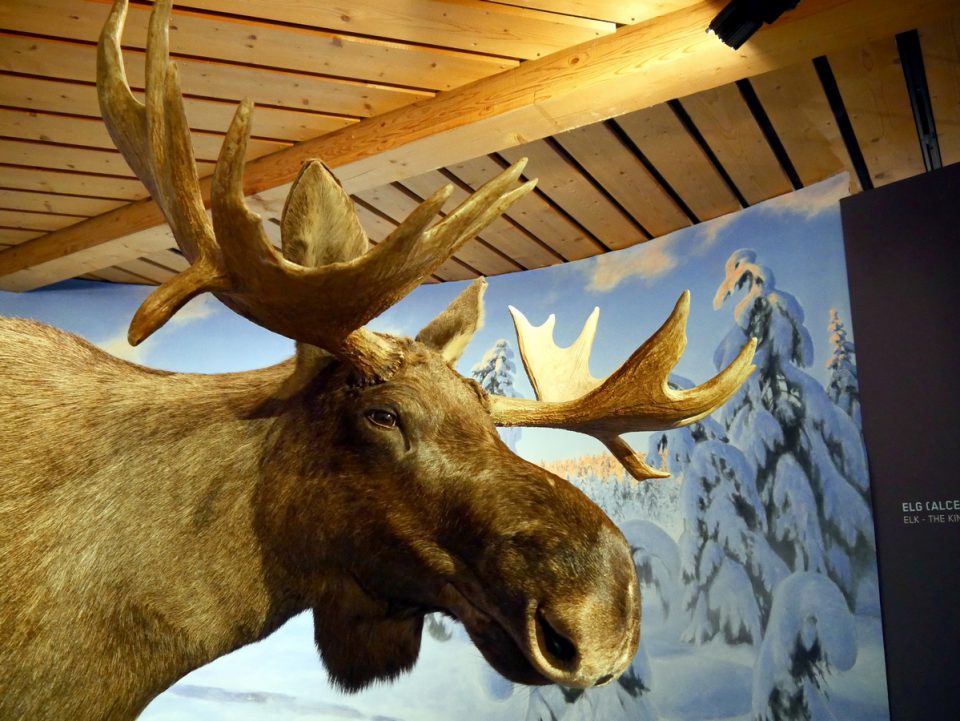 Although we were passing places where an elk could enjoy aquatic plants, pond grasses, young trees or shrubs, we could only see the typical broad open-hand shaped antlers attached above the door on cabins as an evidence of their presence… 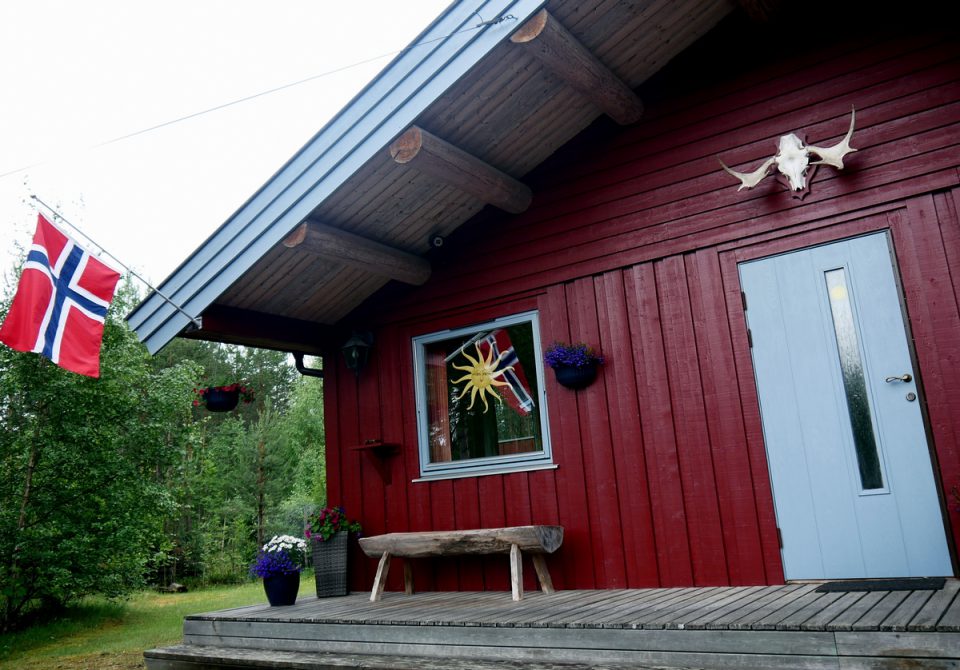 …or attached to trees along the road. Did you know that the elk’s antlers could weigh 20 kg? These brightly coloured antlers were made by Norwegian artist Linda Bakke. They are a part of the project to use art as a reminder of the dangers of wildlife and in this way to reduce traffic accidents caused by collisions with these animals. 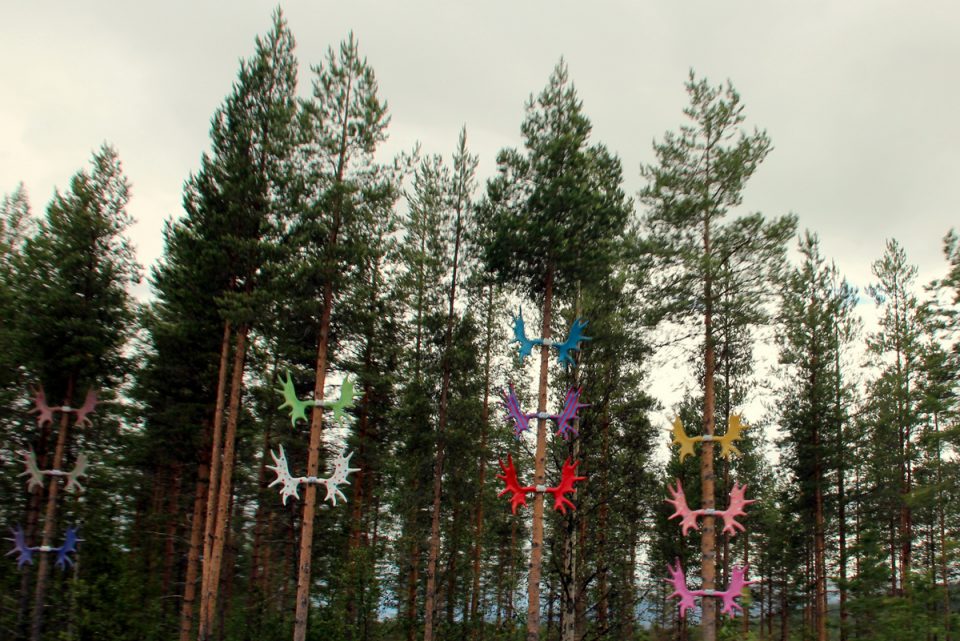 We were keeping watch closely, but we could find an elk as a pop art’s model only… 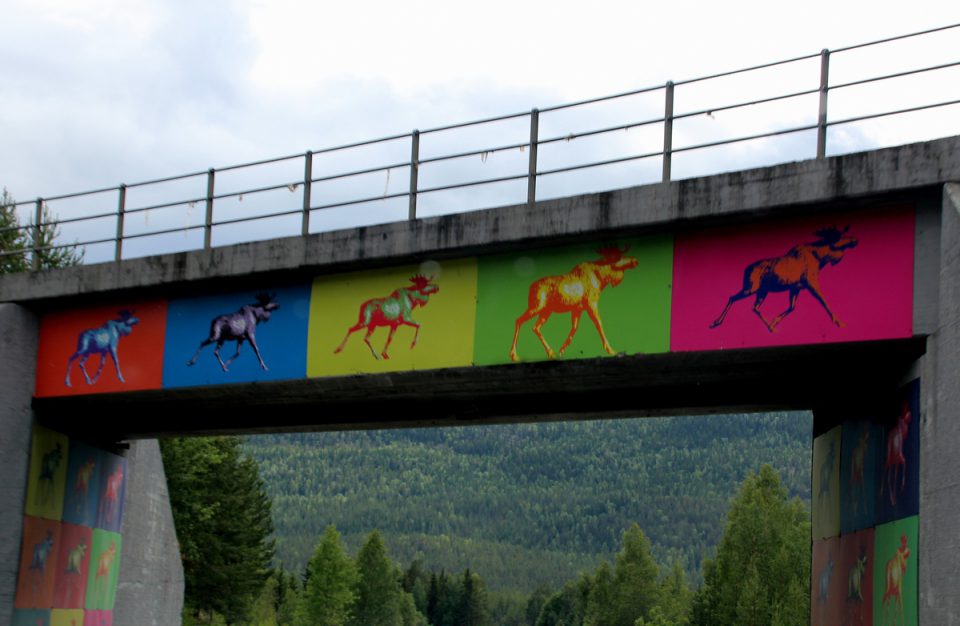 …or as a statue on a roundabout. 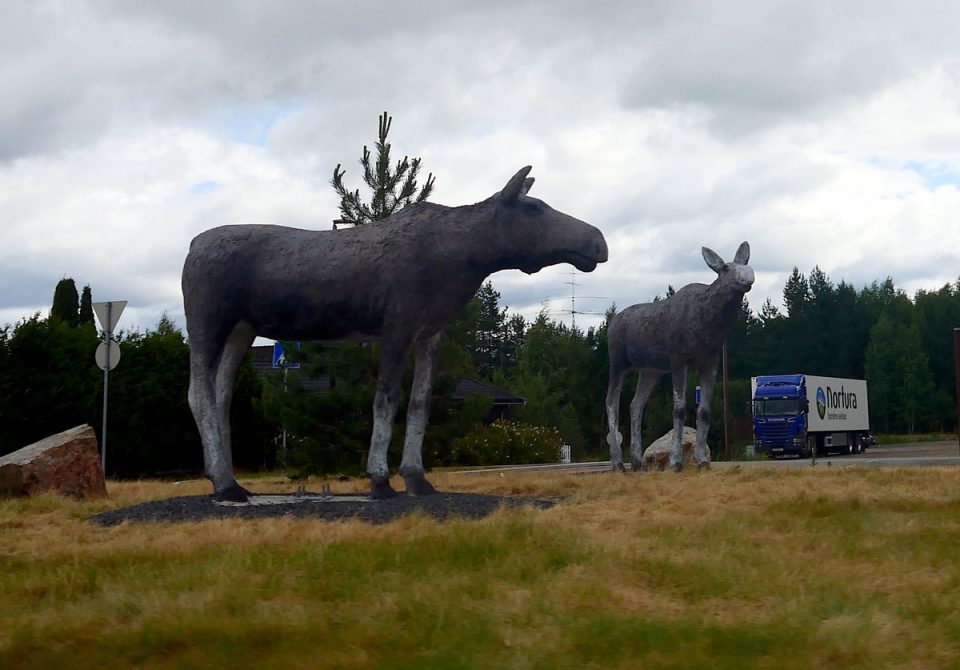 We even saw the world’s largest elk sculpture – at the rest station Bjøråa. It is Storelgen, The Big Elk, made of polished steel. The natural scenery around the statue reflects on it. It was also made by Linda Bakke in 2015. On average, an adult elk stands 2 m high but the height of this one is 10,1 m! It is 30 cm higher than the previous record elk sculpture in Canada. It is also a part of that art project I mentioned above. 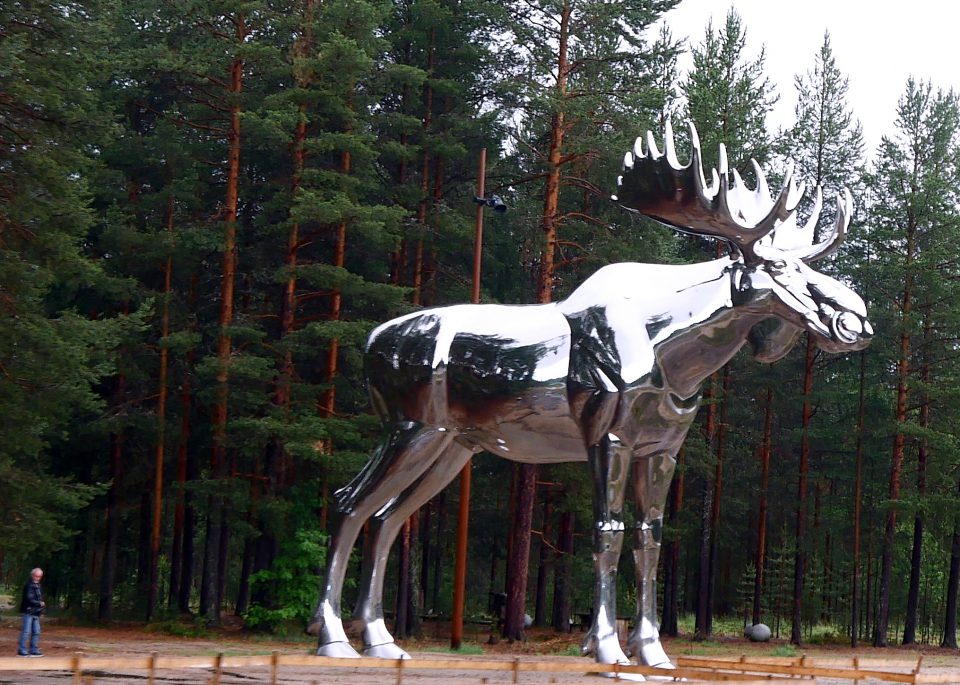 But then we saw him! The elk stood at a glade on the left side of the road, it was exactly a place where we could stop our car without any problems. As if he was waiting for us. He raised his head conscious of his exceptionality and nobility. Still growing, his antlers were covered with a soft velvet fur. He gave us a while to take pictures of him but the pictures are not sharp enough as if our hands were shaking from the feeling of the unique moment. When we got out of the car to take some more pictures, the elk turned his back on us and gracefully jumped over the fence. At that moment, we could see another elk among the trees. It could have been his female partner. We remained standing there for some more time just to work out this extraordinary experience. 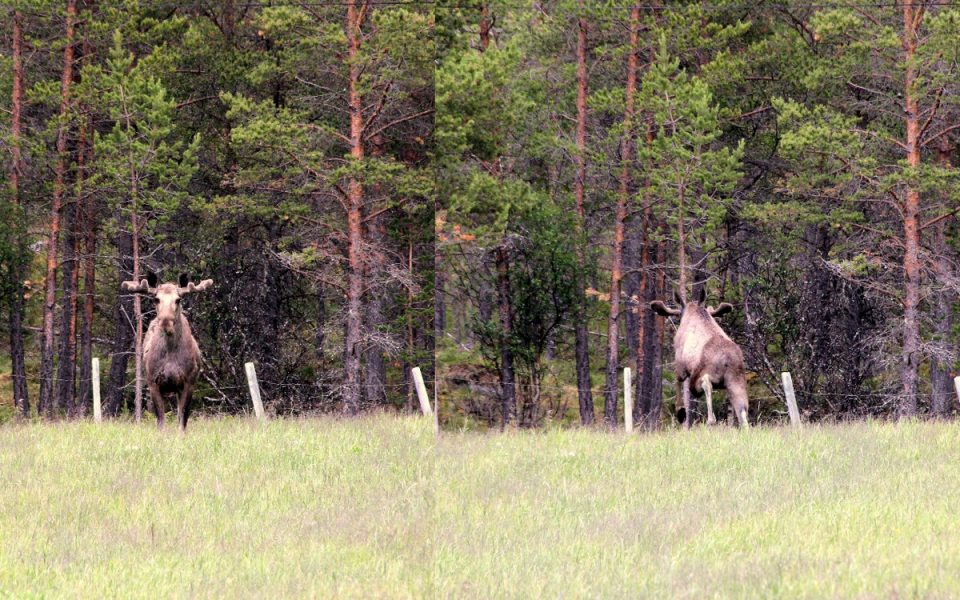 We met the elk near the small town Alvdal so the guidebooks were actually right.

During our journey, we could also see herds of horses from time to time. Although I am not an animal expert, I can already recognize a Fjord horse. After all, it is not so difficult as you can see: the horse is dun in colour and has a strong arched neck. According to the old Vikings’ tradition, the mane is cut off so you can see very well that it is two-toned with a significant dark-coloured hair in the middle of the mane. 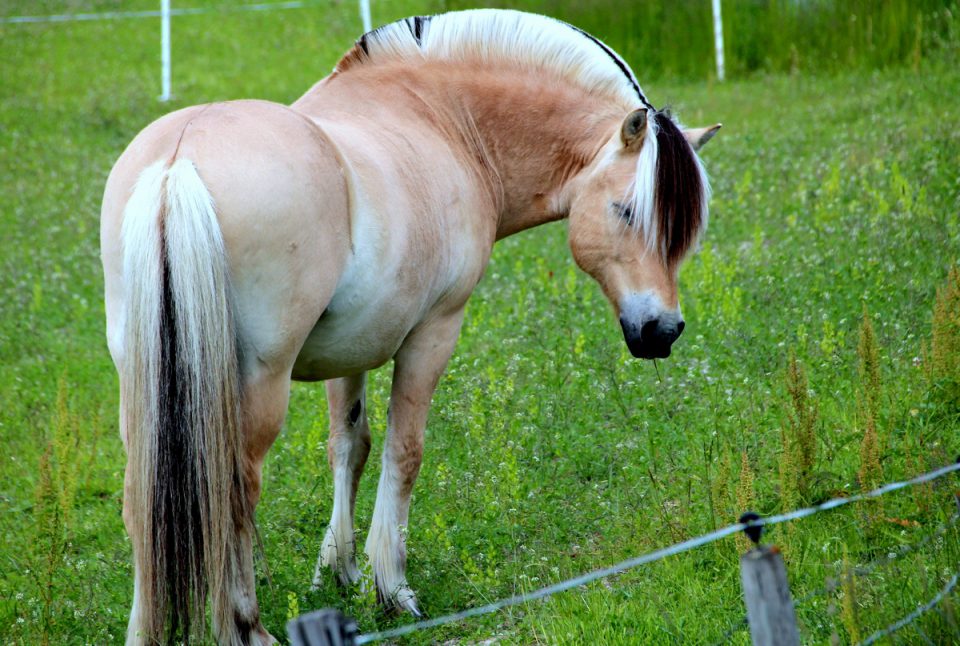 The Fjord horse was brought to Norway 4,000 years ago, probably from far Asia. The horse is smaller in size but very strong. It is one of the world’s oldest and purest breeds.

Have you been to Norway? Did you also meet any interesting animals? If you haven‘t visited yet but you plan to do it, I wish you that an elk is somewhere there waiting to meet you too. Let me know afterwards! 🙂

How to Choose the Right Guide for Paris 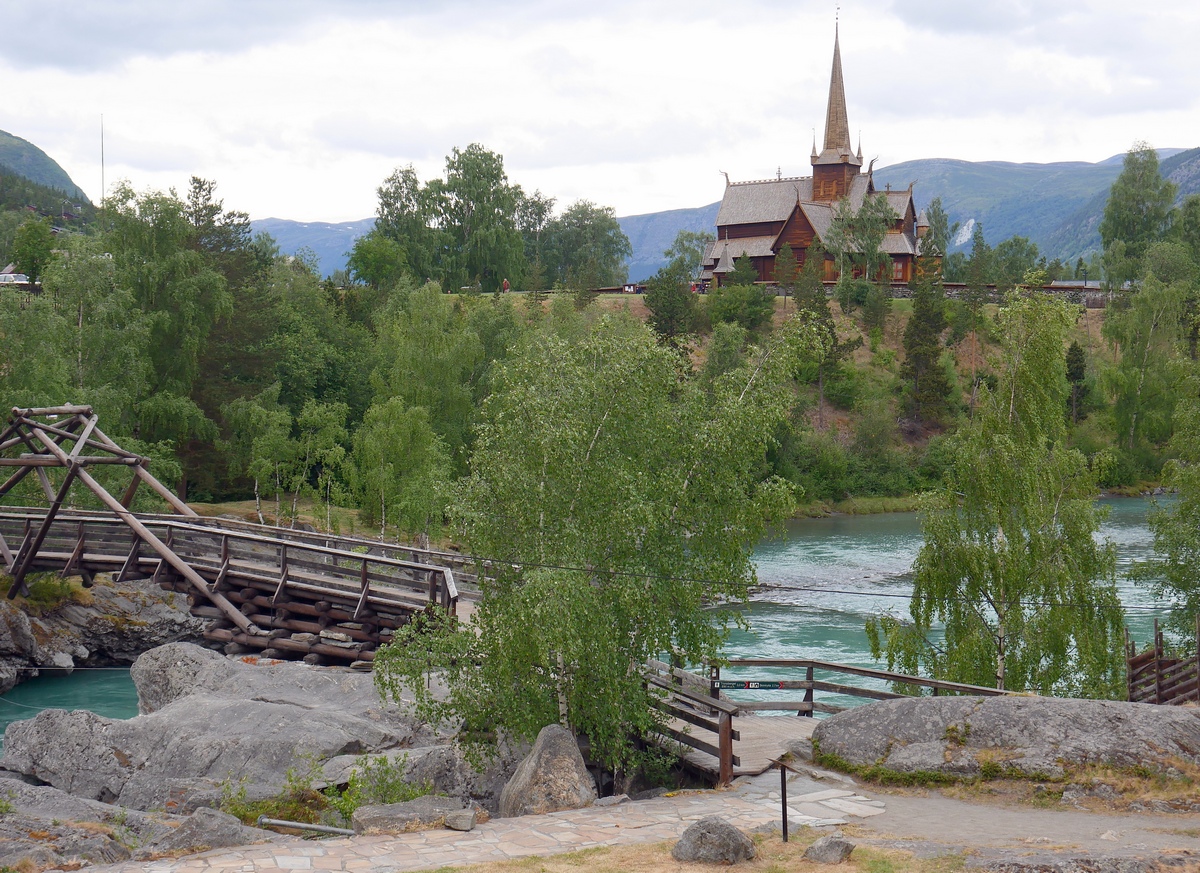 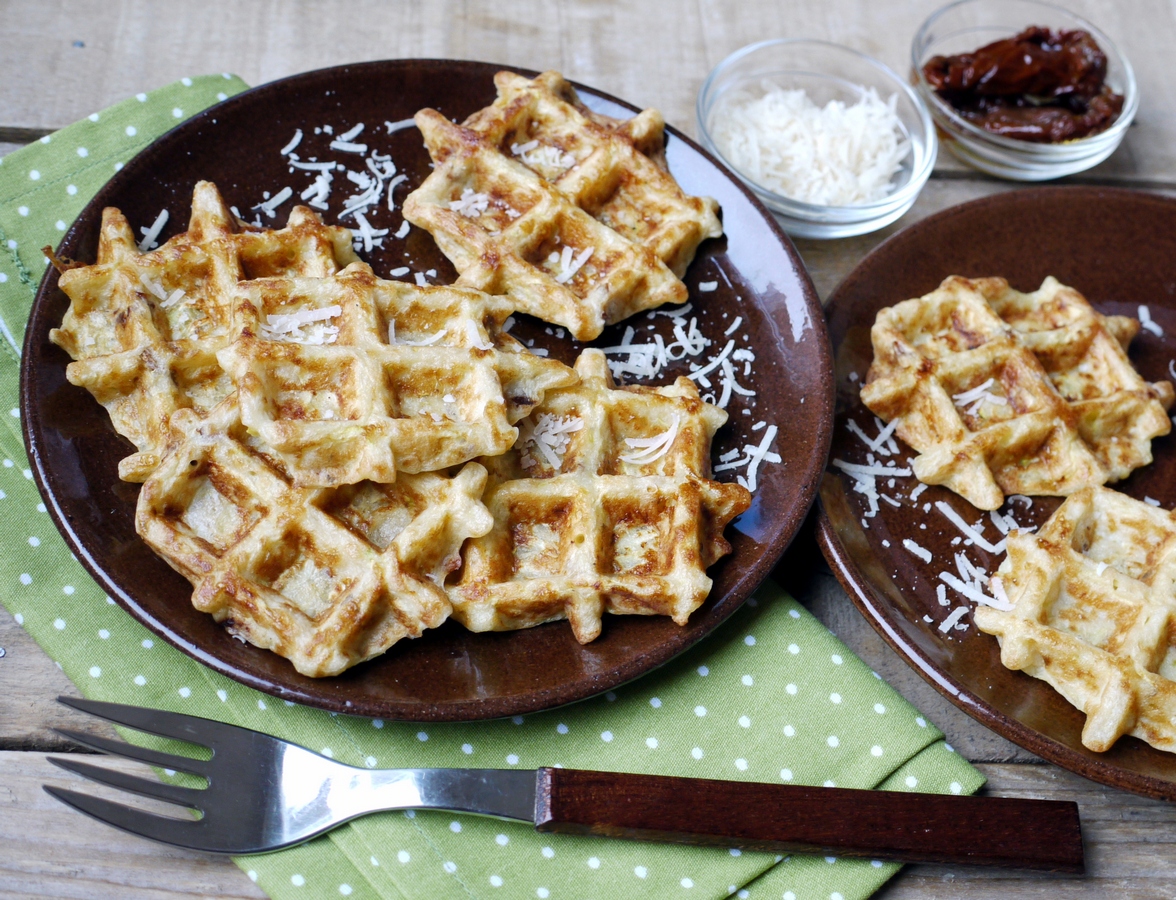