Usually, we visit a museum because of the exhibits. The Museum of Art History (Kunsthistorisches Museum – KHM) in Vienna is unique because at the moment you enter the building, you actually don‘t know where to look first – at the black and white mosaic on the floor, marble columns and statues, richly decorated walls or grand ceremonial staircase? 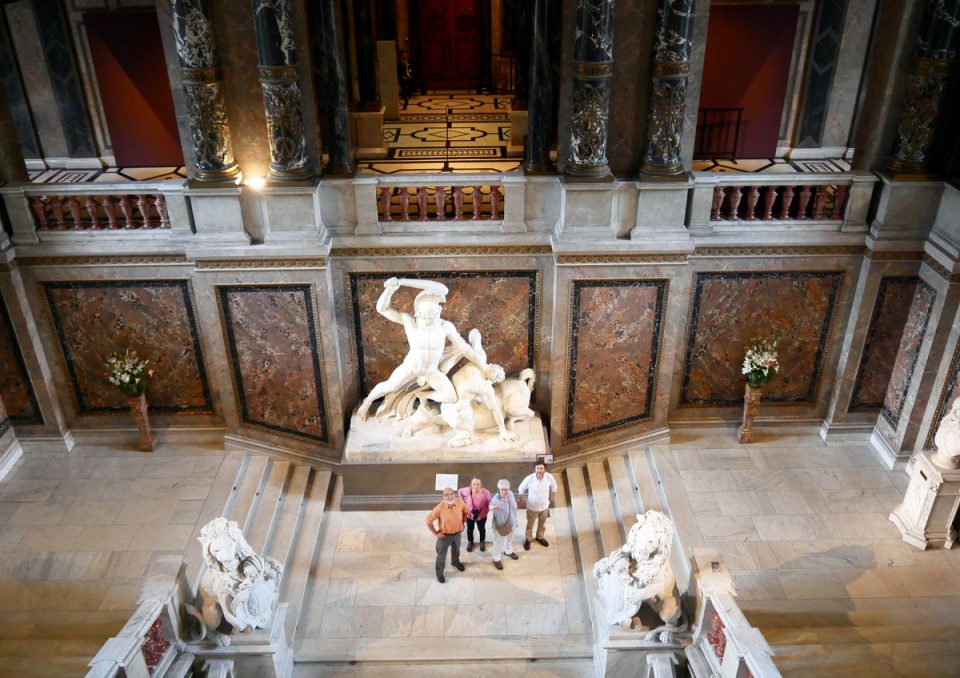 One of the objects I am sure you will notice first is the statue of Theseus slaying the Centaur made by Antonio Canova on the landing of the staircase. If you have read my article about the People‘s Garden in Vienna, then you may remember the snowy white Theseus Temple in that park. Originally, the statue was kept in the temple and landed later under unclear circumstances in the museum on this prominent place. 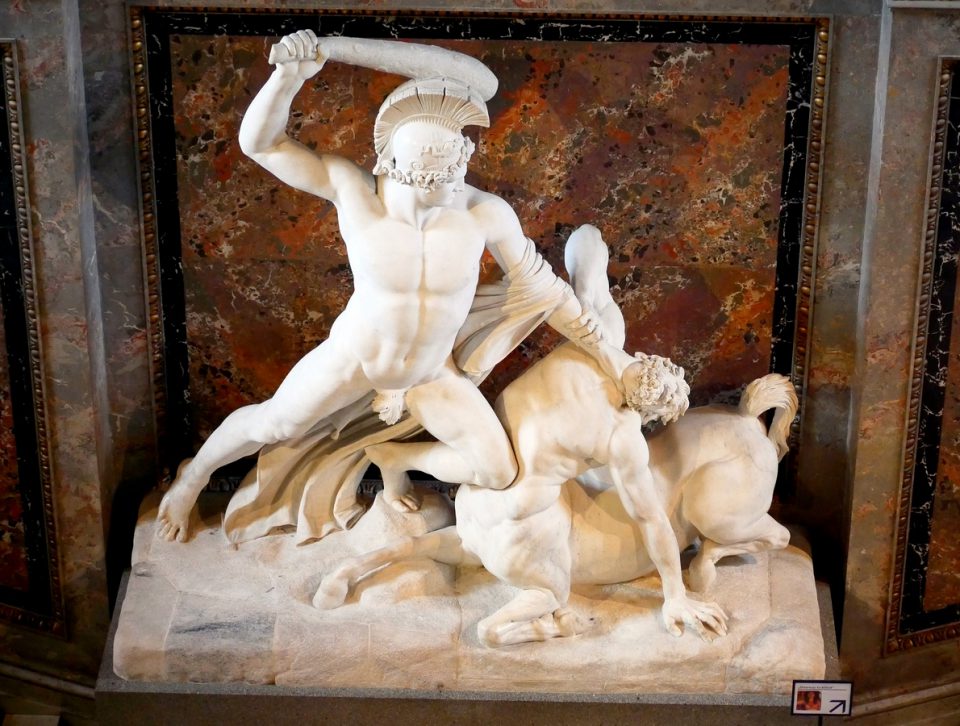 This is the place where most of the visitors stop for a while not only to take a selfie with the brave Greek hero but also to bend back and look at the ceiling above their heads. This is the Apotheosis of Renaissance made by the Hungarian painter Mihály Munkácsy in 1890. 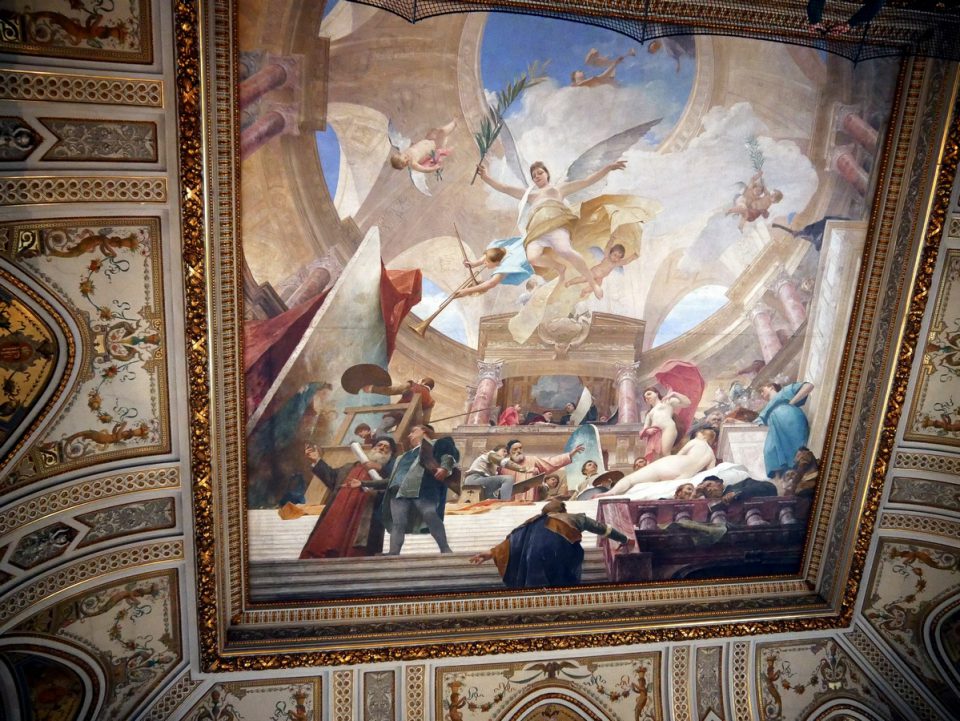 After at least a fleeting glimpse at the ceiling, visitors continue upstairs and then run in all the different rooms of the museum with rich art collections. Usually, I do it the same way, but last time I visited the KHM I paid more attention to the paintings around the staircase. This year (2018), we commemorate the 100th anniversary of the death of the famous Austrian painter Gustav Klimt. The KHM had an excellent idea how to bring the works of him and other painters who decorated the walls of the vestibule closer to the visitors. 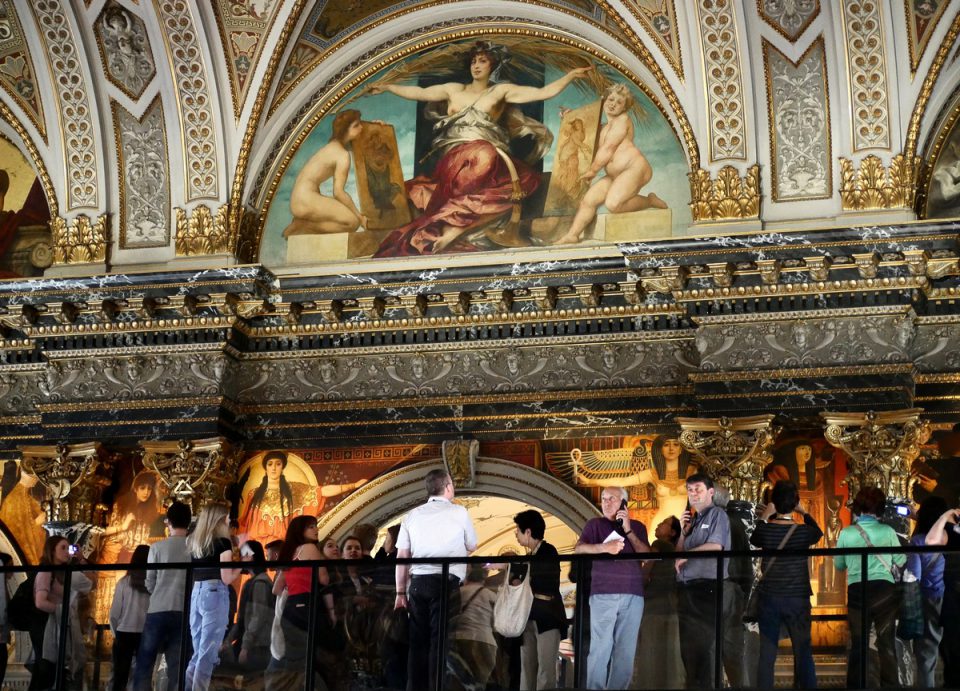 They have built a metal bridge on the northern side. If you stay on it, a totally different view at that space and its decoration will open in front of you. You can even see the paintings in the corners and between columns which normally could be seen only very hard. 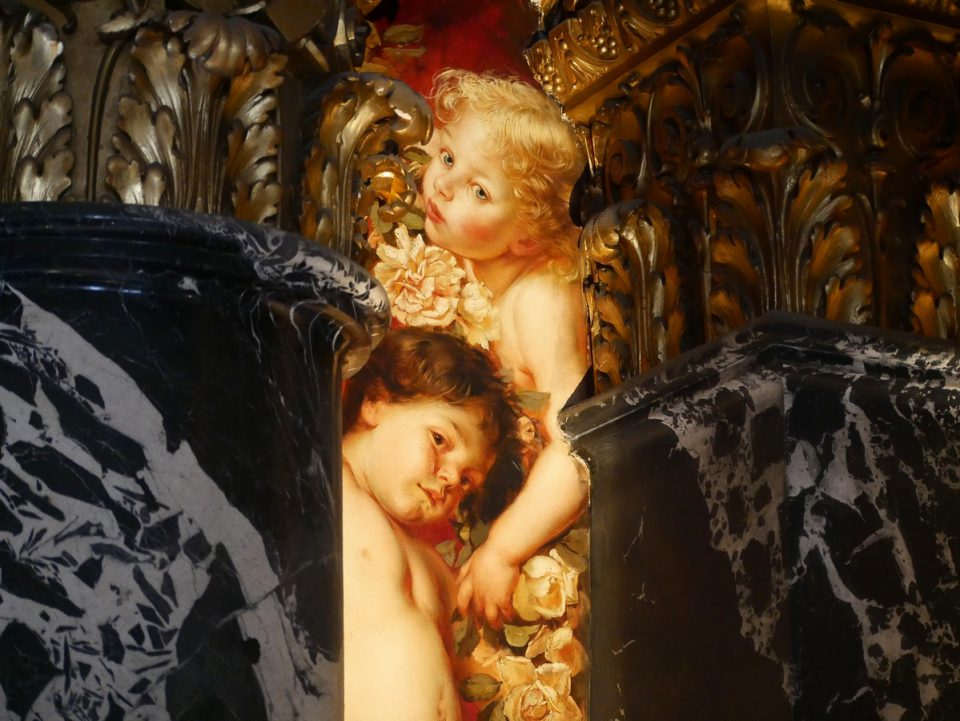 The ceiling painting is also much closer from here. You can see two men submerged in a talk better – they are Raphael and Leonardo da Vinci, who holds a scroll in his hand. 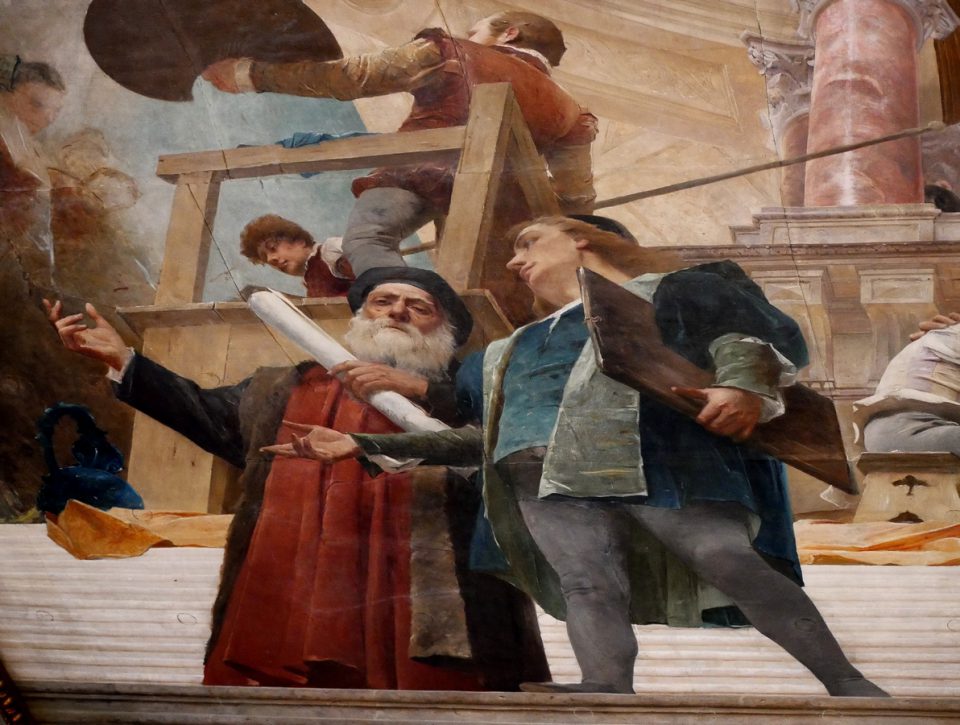 However, there are also other personalities – Michelangelo behind a balustrade with a hammer in his right hand, Titian explaining something to his student and Paolo Veronese standing on a scaffold in front of a large canvas. 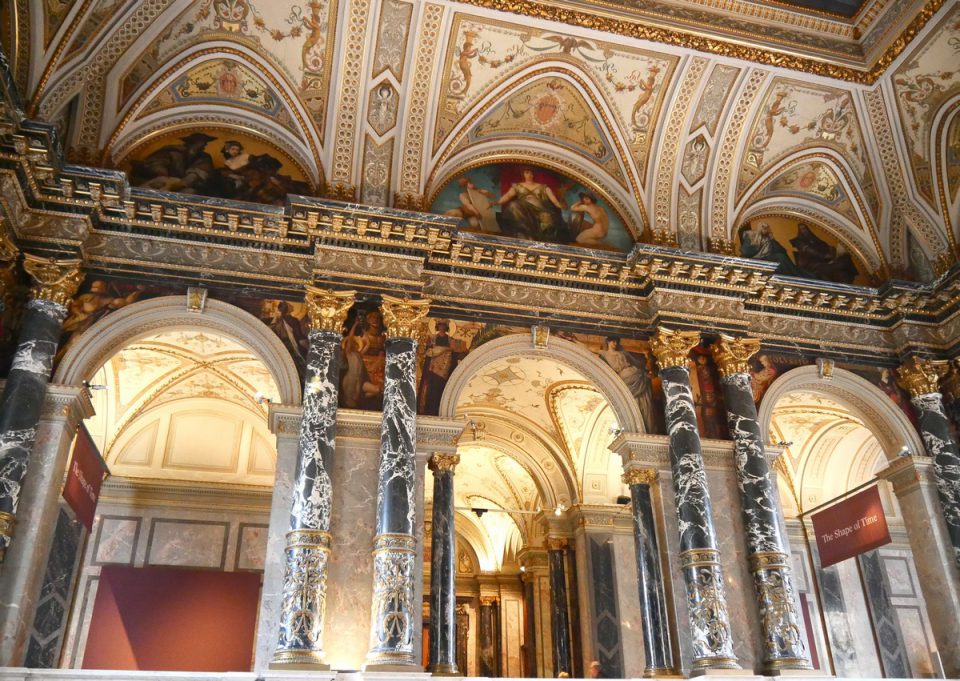 There are 12 lunettes (half-moon shaped spaces) around the ceiling, decorated with the paintings of Hans Makart, a dominant protagonist of Viennese painting art at the end of the 19th century. They are painted on a gold background and fixed to the wall and they present Italian, Spanish, German and Dutch masters of the 16th and 17th centuries with their models or favourite objects. They were created in accordance with their self-portraits and other paintings exhibited not only in the KHM but also in other renowned museums.

Makart’s health got seriously worse during his work on the staircase and he died in 1884. The ceiling and lunettes remained unfinished. Hans Canon was commissioned to complete it but he also died unexpectedly. That’s why the Hungarian painter Munkácsy, who lived in Paris at that time, was asked to finish the ceiling. However, there were still 40 (!) other empty fields to be covered with 40 canvas paintings. This task was entrusted to three young artists: 27-year-old Gustav Klimt, his younger brother Ernst and their friend Franz Matsch.

It was not only a question of prestige but also a formidable challenge for them. You know it – to finish an open work is often more difficult and more responsible than to start from the very beginning. The paintings had to fit atypical spaces and what’s more, the painters were under big-time pressure. They started in 1890 and the opening of the museum was planned for October 1891! And because the museum had been under construction for almost 20 years already, Viennese people were already very impatient.

The temporary bridge permits visitors to better approach those paintings. Here you have some of them.

On the eastern side (on your left, if you stand on the bridge), there are the paintings of Ernst Klimt which depict German Renaissance, Spanish and Dutch art and Italian High Renaissance.

The southern wall (opposite the bridge) was executed by Franz Matsch. In the left, there is Saint George. Although it is pretty dark, nevertheless, you can see a skull reminding of Holbein’s painting The Dance of the Death.

The western wall (on your right, if you are on the bridge) was decorated by all three artists:

And now it’s the time to explore Gustav Klimt’s works on the northern wall and examine them at close hand thanks to the bridge.

Ancient Greek art – a young girl on the left reminds of the figures of Tanagra. There is also a small statue of Venus undoing her sandals in front of a big vase, also from the collection of the KHM.

On the right side of this wall, there are paintings symbolizing Old Italian art.

Finally, we approach Egyptian art. I have a special connection to this because I spent four years in Egypt. That’s why I left it for the end. It is unbelievable how Klimt managed this. Although there is a large section of the Ancient Egyptian Art in the KHM today, at the time when Klimt was working on these paintings, all the objects were still packaged and stored in the Belvedere palace waiting to be moved to the new museum. There were no photographs available, so Klimt had to study different publications, including the catalogue of the Cairo Museum. 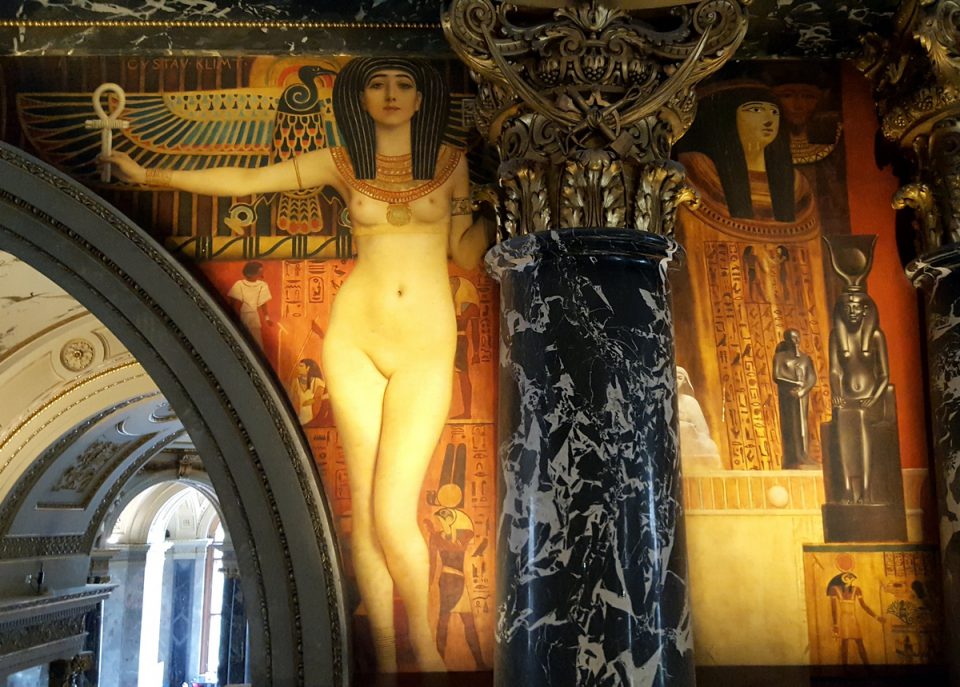 The naked female symbolizes life, therefore she holds the symbol of life (ankh) in her right hand. On the right, you can see a sarcophagus, death mask and other items which were used to be put in tombs by Ancient Egyptians. There are 21 objects, painted in detail, so you can feel like entering the Egyptian collection of the museum already – papyri, gods, hieroglyphs, a statue of Isis, pectoral, ushabti, solar disc… 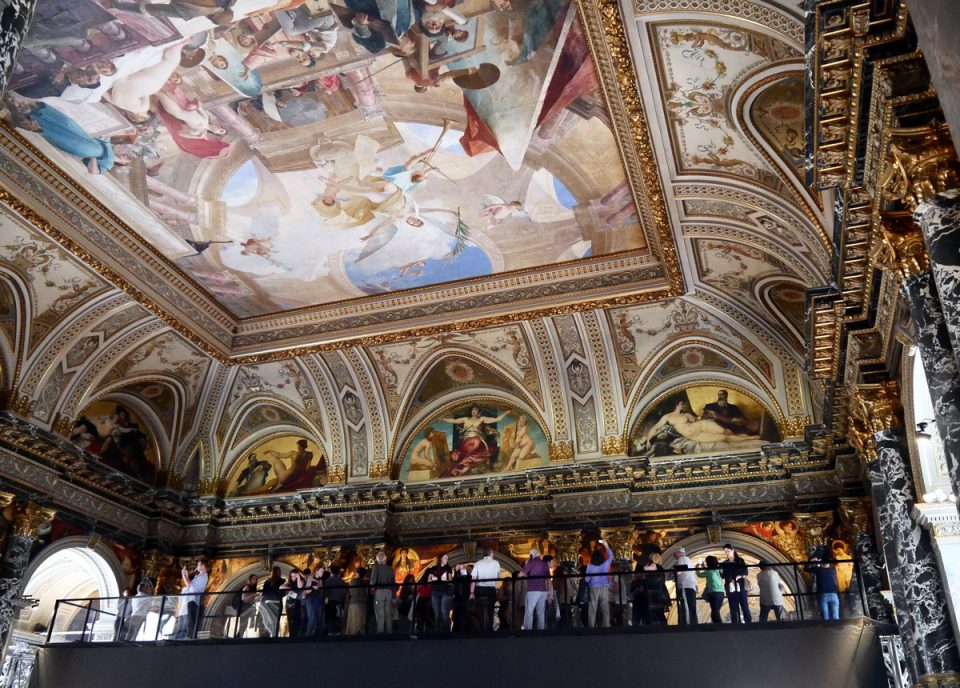 As you can see, the decoration of the vestibule in the Museum of Art History corresponds exactly to the name of the museum – it explains the history of art. It doesn’t just delight the eyes of the visitors but also instructs and inspires them to enter the art collections of this museum.

The Museum of Art History was opened on 17th October 1891. As usual, there was harsh criticism after that. However, it is important to note that the rooms didn’t look like they do today. The walls were completely covered with paintings. The paintings blended, you could not concentrate. At the same time, the new Court Theater was opened, but the acoustic was not good. So all the newspapers wrote that Vienna had gotten a new theater where you could not hear anything and a new museum where you could not see anything… 🙂

The “Stairway to Klimt” will be available until 2nd September 2018. If you won’t manage, then you better bring binoculars with you if you want to explore those walls with paintings as well.

At the Table with the Austrian Emperor
Tags: artcity holidaycity tourculturehistoryKHMKlimtmuseumMuseum of Art Historypaintingstips for visitVienna
Previous Post 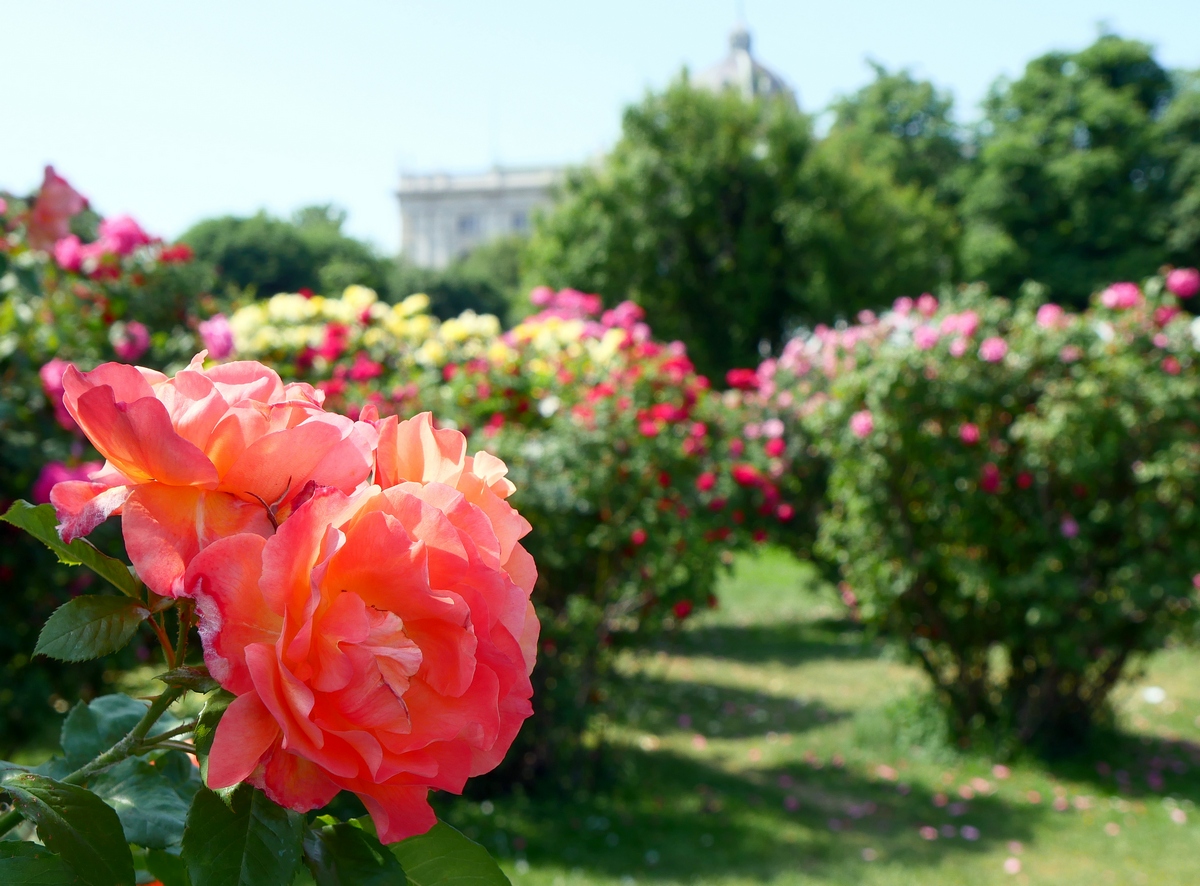 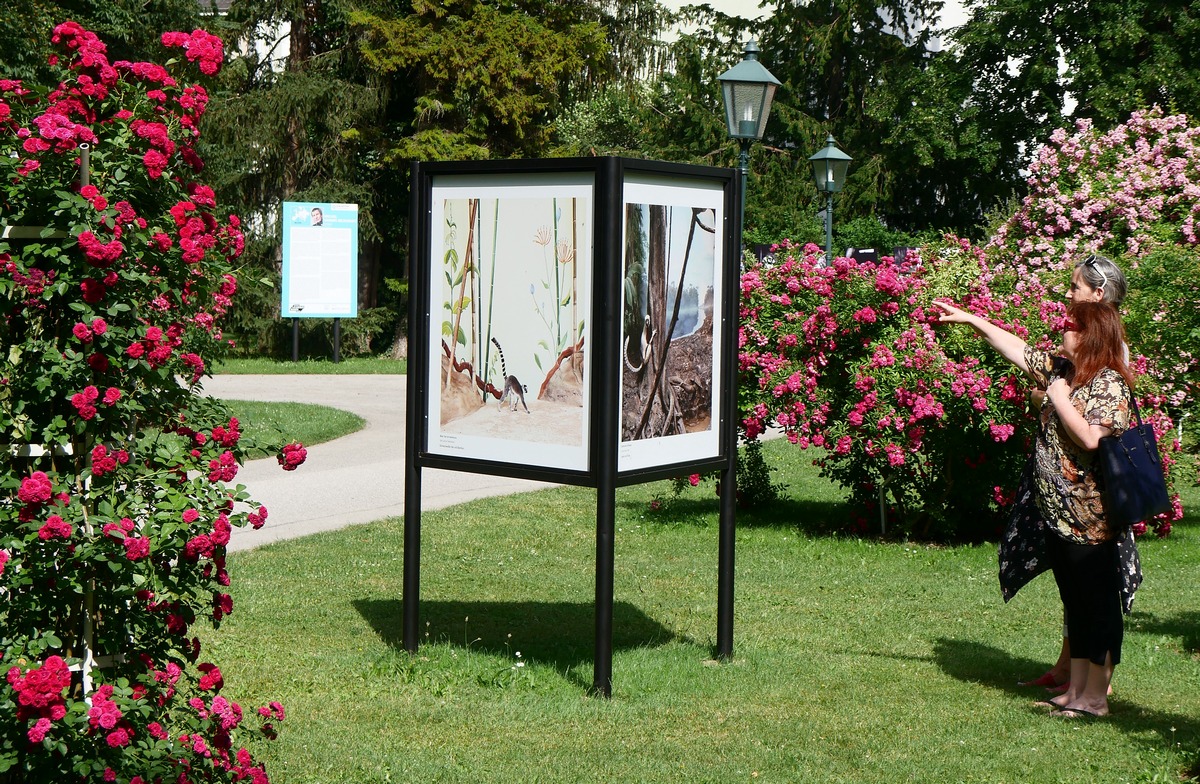