No Result
View All Result
Home TRAVEL Bosna and Herzegovina

by Ingrid
in Bosna and Herzegovina, TRAVEL
0

Necropolis Radimlja (3 km west of Stolac) – with medieval tombstones (stećci) of Bogomils. Bogomilism was a sect created in the 10th century in Bulgaria and spread in the whole Balkans. The Bogomils accepted the New Testament and the Book of Psalms, gave up their secular fortune, did not use the Christian cross nor build churches. The services were performed in simple houses without any decoration. There are 133 monuments in the necropolis from the 14th and 15th centuries, 63 among them are decorated. On some of them, there are also engraved names of stonemasons. 20 tombstones belong to the noble family Miloradović. On the huge white limestone monuments, you can see different ornaments, figures, flowers, swords, bows, warriors, hunters on horses, dancing women and some animals. The figures often raise their right hand with spread fingers as a symbol of the power of God.

Although Croatians had demanded the whole sea coast for themselves after the split of the former Yugoslavia, according to the Dayton Peace Agreement Bosnia and Herzegovina received 24 km of the coastline. 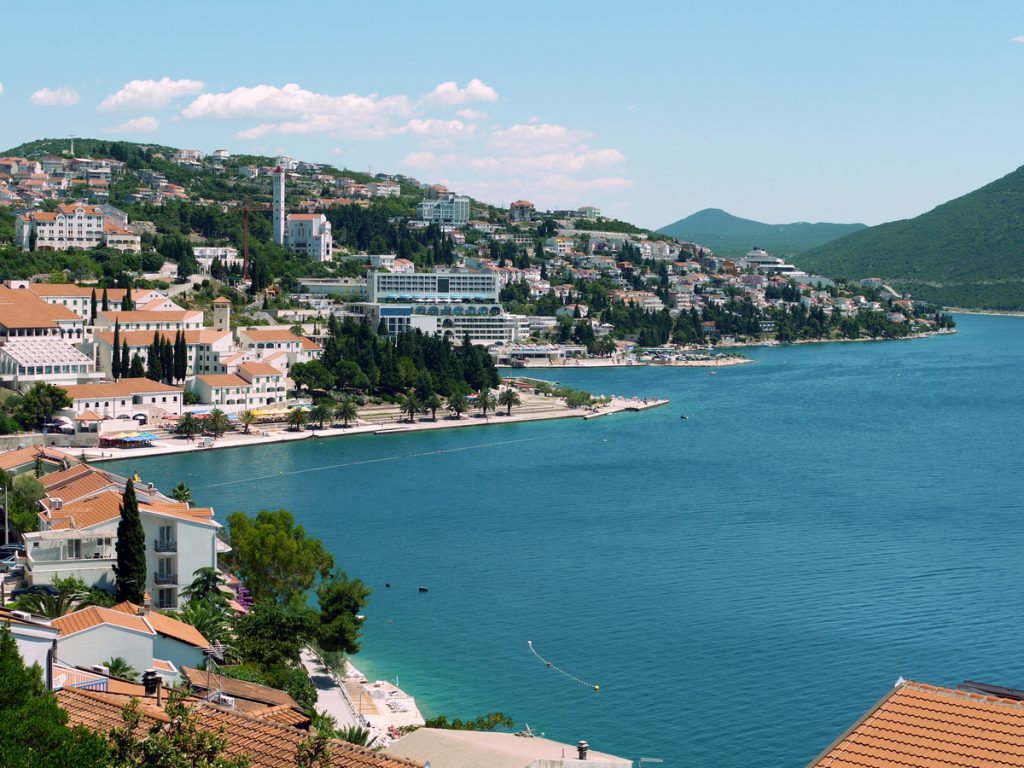 The only town to be situated here is Neum – a base for smugglers in the past, rebels against the foreign rulers during Ottomans period and partisans during World War II. After the war, it used to be a favourite holiday place for communist officials in the former Yugoslavia. There are both older and new hotels now, and also private rooms. It is suitable for families with children. Prices are much lower than in neighbouring Croatia. 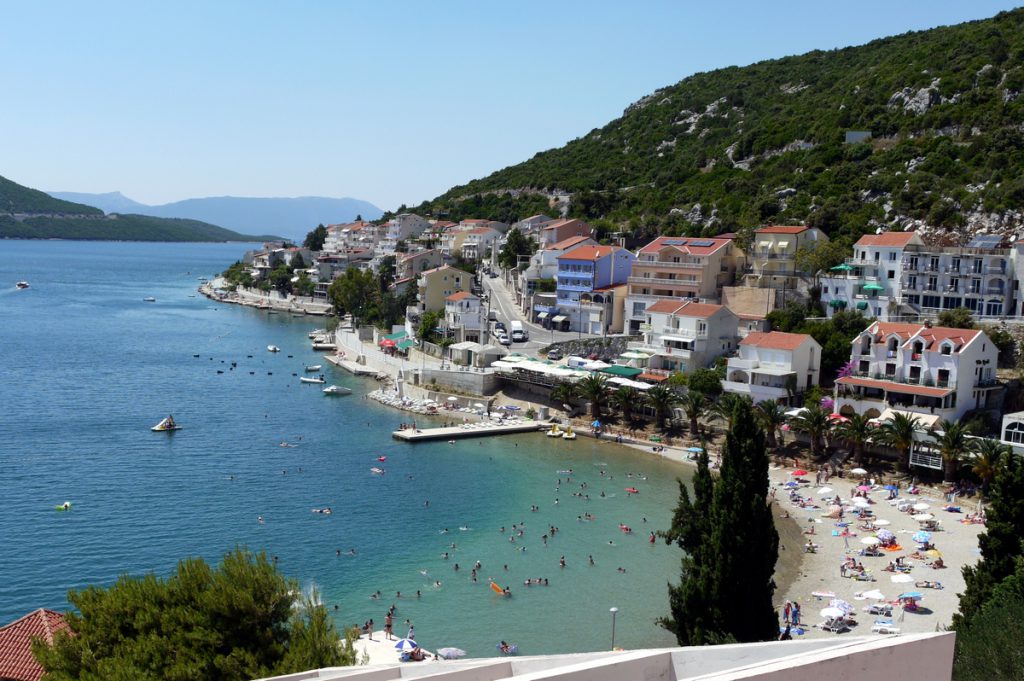 There were many tourists from Poland during my visit here, usually they combine their stay with the visit to Medjugorje, a site of pilgrimage. But other trips are also possible – to Dubrovnik (60 km) or Makarska (80 km), the route is very pleasant: the valley of the Neretva river with canals, trees and small fertile fields. You have to have your passport when crossing the check points. If you come here even just for a visit, I recommend you to have a lunch or dinner at the summer restaurant of the Zenit Hotel. They serve excellent sea food specialties and local wines. 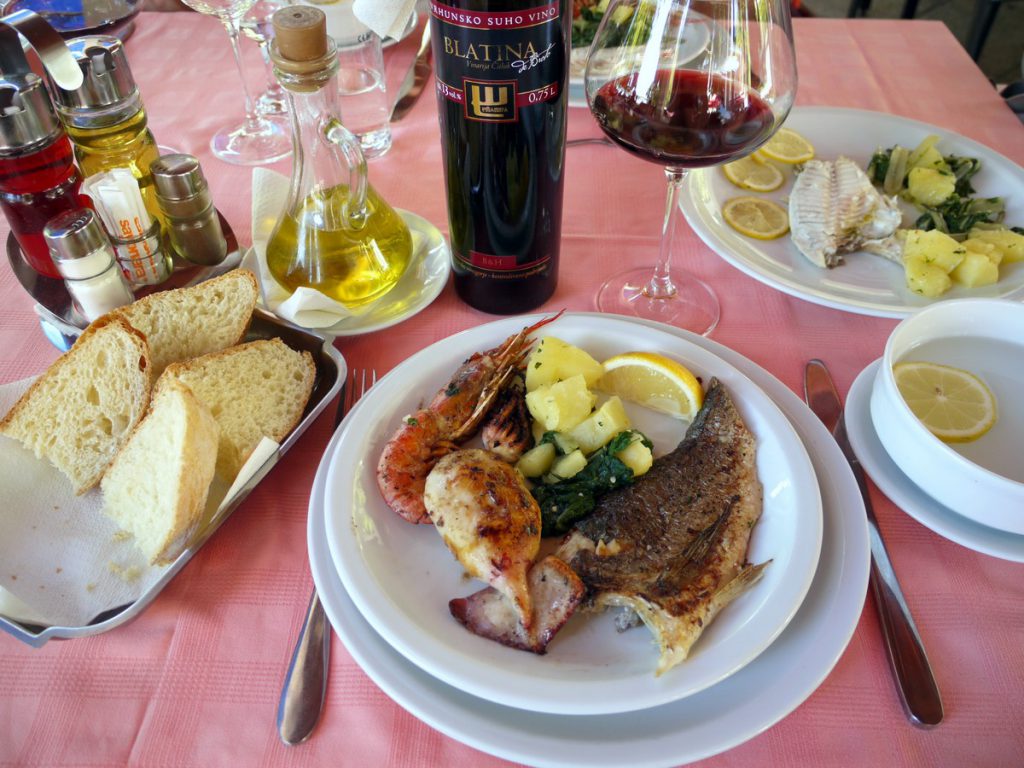 Vjetrenica – the Wind Cave – is the largest cave complex in Bosnia and Herzegovina. Why this name, you will understand as soon as you enter the cave. Even in summer, the strong, cold wind has a velocity of 15 m per second. That’s why it is necessary to put on a sweater or jacket and wear good shoes. Almost 2 km of the total length (7 km) are accessible. 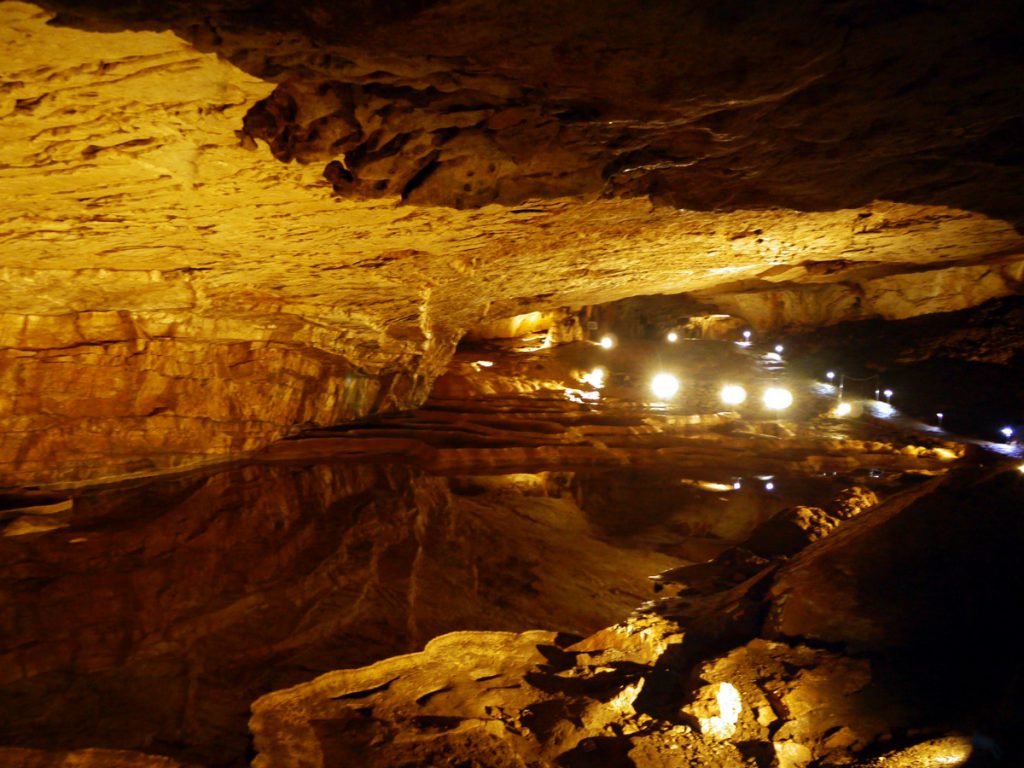 There are several lakes and typical cave sceneries inside, they say that the cave is very charming even in winter. But the most important attraction is proteus anguinus. This odd creature with 4 legs and a length of 20 – 30 cm, which can survive for several years without food, is also called human fish by local people because its skin colour is similar to human skin. Unfortunately, I could see it in some pictures at the entrance only. Well, maybe I have to come back one day… 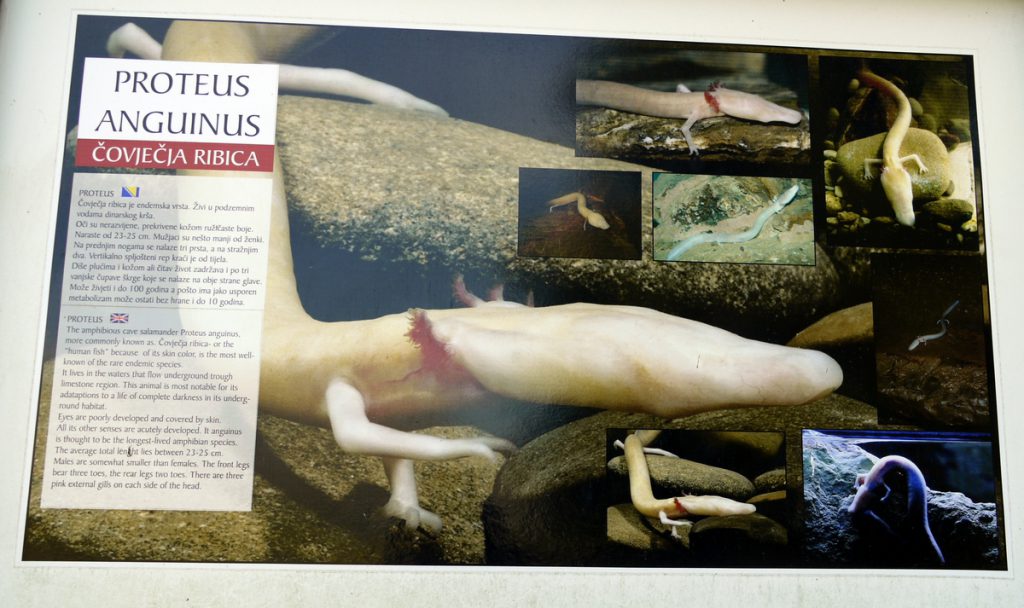 By the way, to get to the cave you have to pass through the territory of Republika Srpska – according to the mentioned Dayton Agreement, Bosnia and Herzegovina was divided into two constitutional and legal entities: the Federation of Bosnia and Herzegovina and the Republika Srpska. Passing through the second one of them you will see signs written in Serbian Cyrillic. There are no borders.

Mogorjelo – the first buildings are from the 1st century, probably destroyed by a fire. In the 4th century, a very rich Italic settler built a large suburban manor house (villa rustica) here. We do not know his name and just the ruins remain of his luxurious residence. They have become overgrown with grass and the whole scenery is completed by cypress trees. 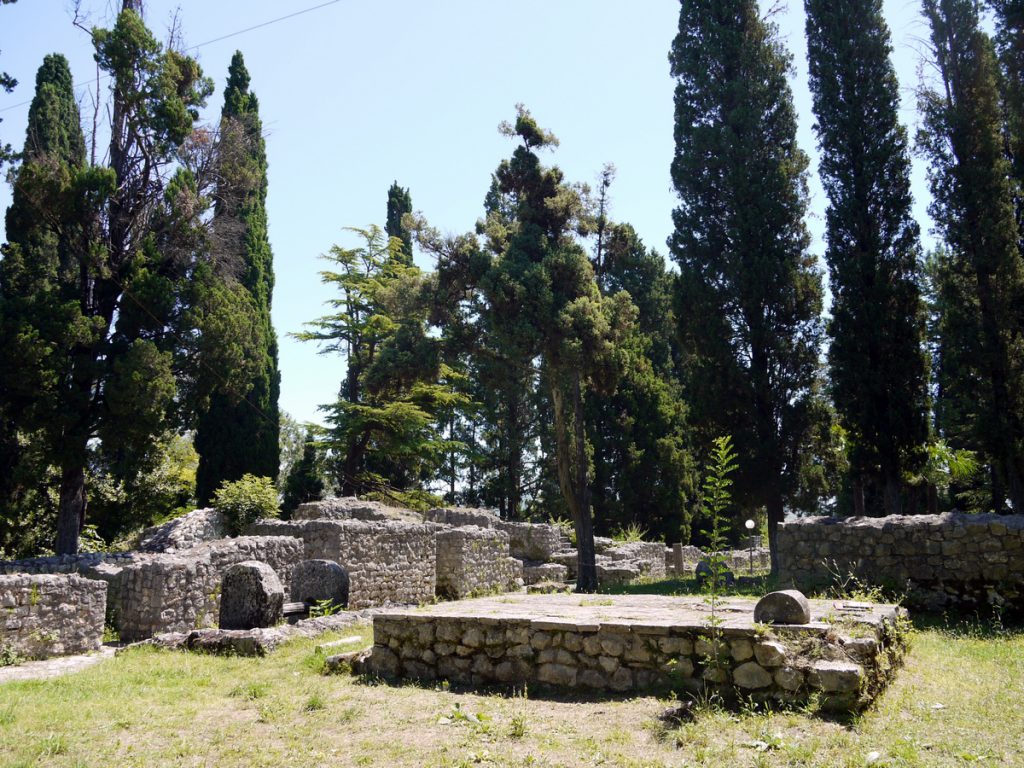 Archaeologists have identified several buildings in this open-air museum like a bakery or mill and of course, also some wine cellars. The manor house was probably destroyed by Visigoths. Later, a basilica of St. Mogoro stood here. St. Mogoro, who gave the name to this place, was an early Christian martyr. There is also a pleasant restaurant in the area and a horse riding club Vranac nearby. 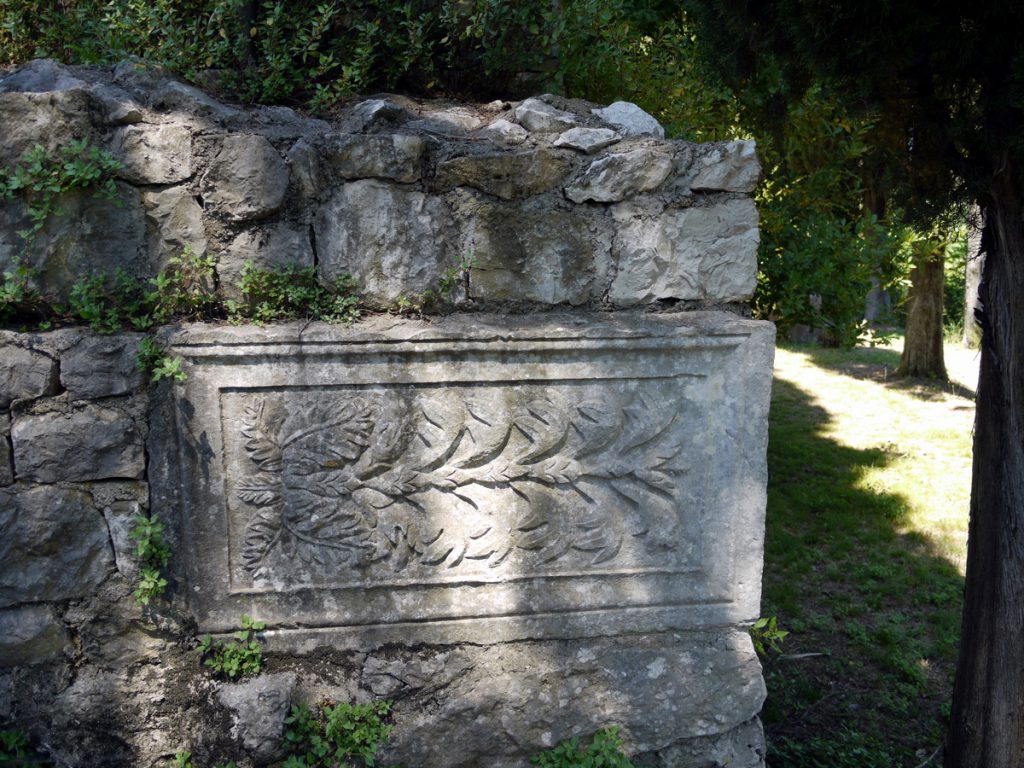 Medjugorje is not recognized by the Vatican as a pilgrimage site because they can not confirm the supernatural nature of the apparitions. Anyway, I think that the fact that a small village where people lived a miserable existence by growing wine, tobacco, fruits and vegetable and young people moved to America because they could not see any perspective, and is now a place where houses are built with 3 floors and where are more than 15,000 beds for pilgrims although the population is only about 4,500, is also a miracle! And every year, hundreds of new beds are added.

In June 1981, allegedly six local children witnessed apparitions of the Virgin Mary, who was very beautiful and floated on a cloud, holding a child in her arms. She encouraged peace, belief and prayer. Two weeks later, the news about the apparitions spread around the whole world. Since then, many pilgrims have come to this place.

The Parish Church of St James dominates the site. 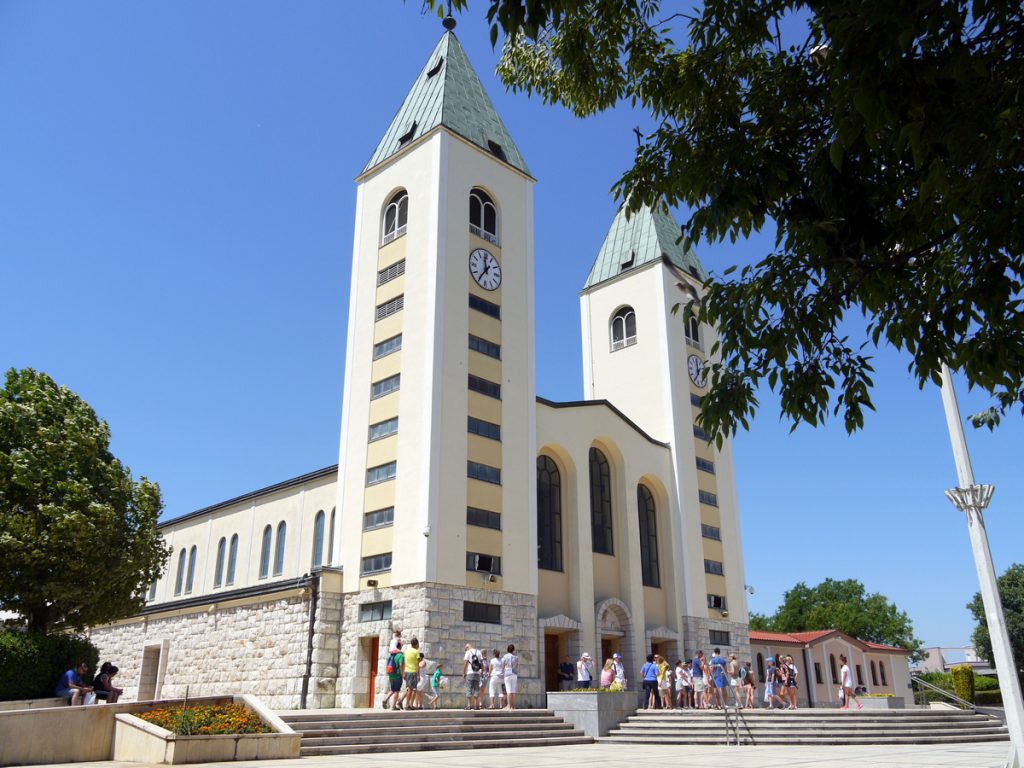 A marble statue of the Virgin Mary from the Italian sculptor Dino Felici stands in front of the church. Worshipers kneel down, devoutly telling their beads. 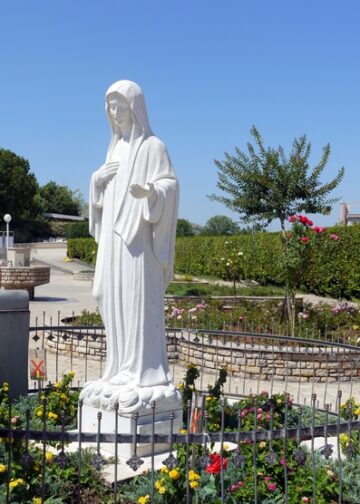 The site is ceaselessly extended. There are so many confessionals that the place is also called The biggest confessional in the world. An open-air altar was built in 1989 to seat up to 5,000 pilgrims. When I was there, the benches were empty but from everywhere, you could hear the unmistakable sound of hundreds of cicadas. I only did not know if they were praying or just singing. 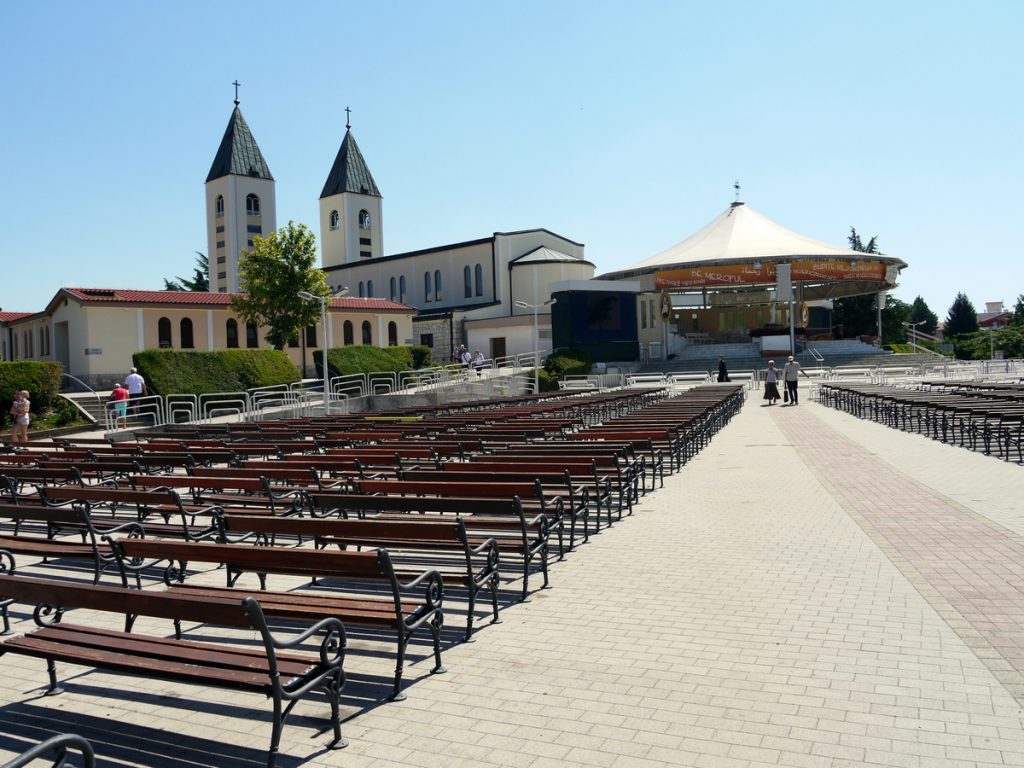 I liked the bronze statue Risen Christ most – a replica from the Slovenian sculptor Andrej Ajdič. The figure of Jesus, 2,77 m high, stepped from the cross and stretched his arms as they were still nailed. Since 2001, some holy liquid has been dripping from the right knee. Pilgrims were standing in line with handkerchiefs in their hands, ready to collect some drops of it. 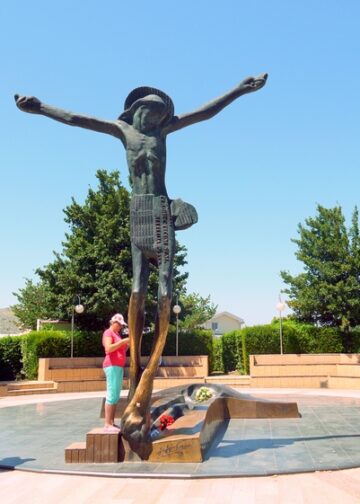 Today, Medjugorje is one of the most visited pilgrimage sites in Europe. Every year, about 1 million of pilgrims are coming. There are also many shops with religious souvenirs, some restaurants… Almost every citizen lives from the tourism and the region belongs to the most prospering ones in Bosnia and Herzegovina. So why do not believe in miracles? 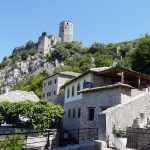 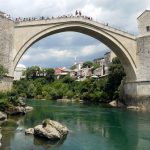 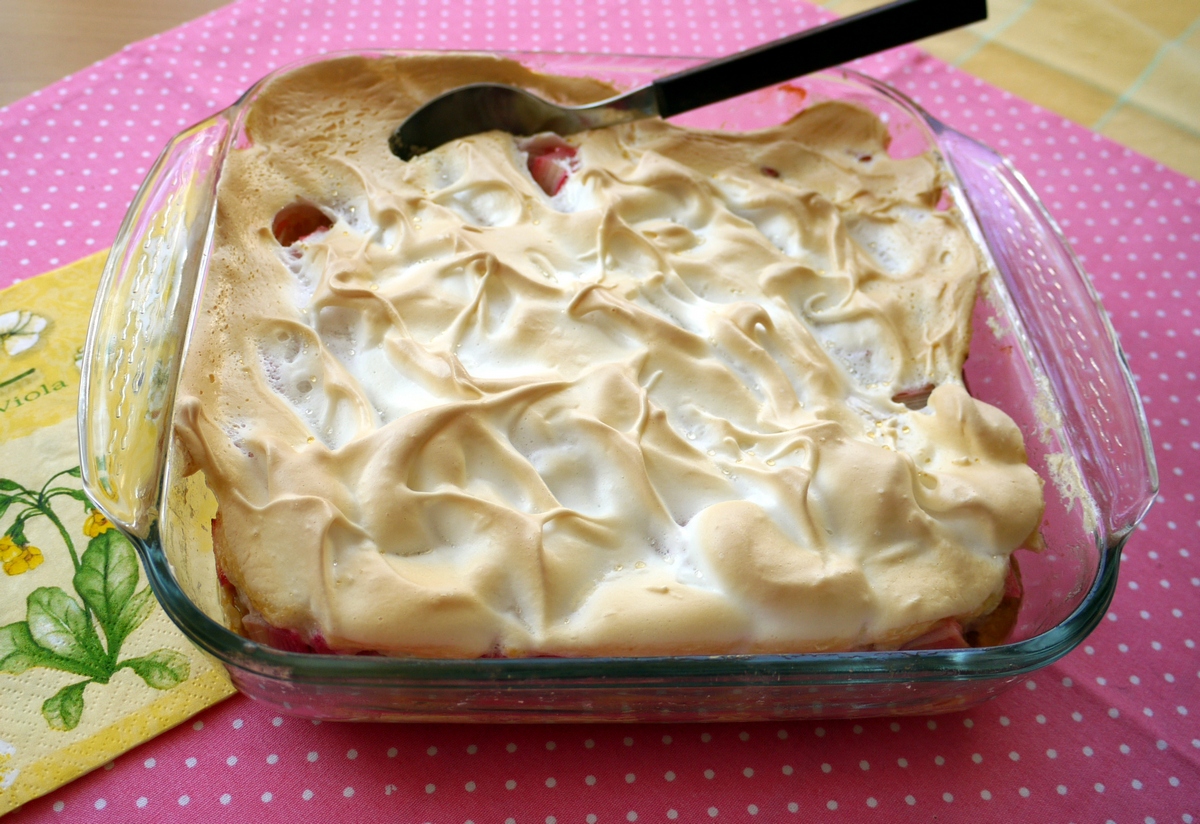 Spring in the Paintings and on the Plate
Rhubarb Pudding 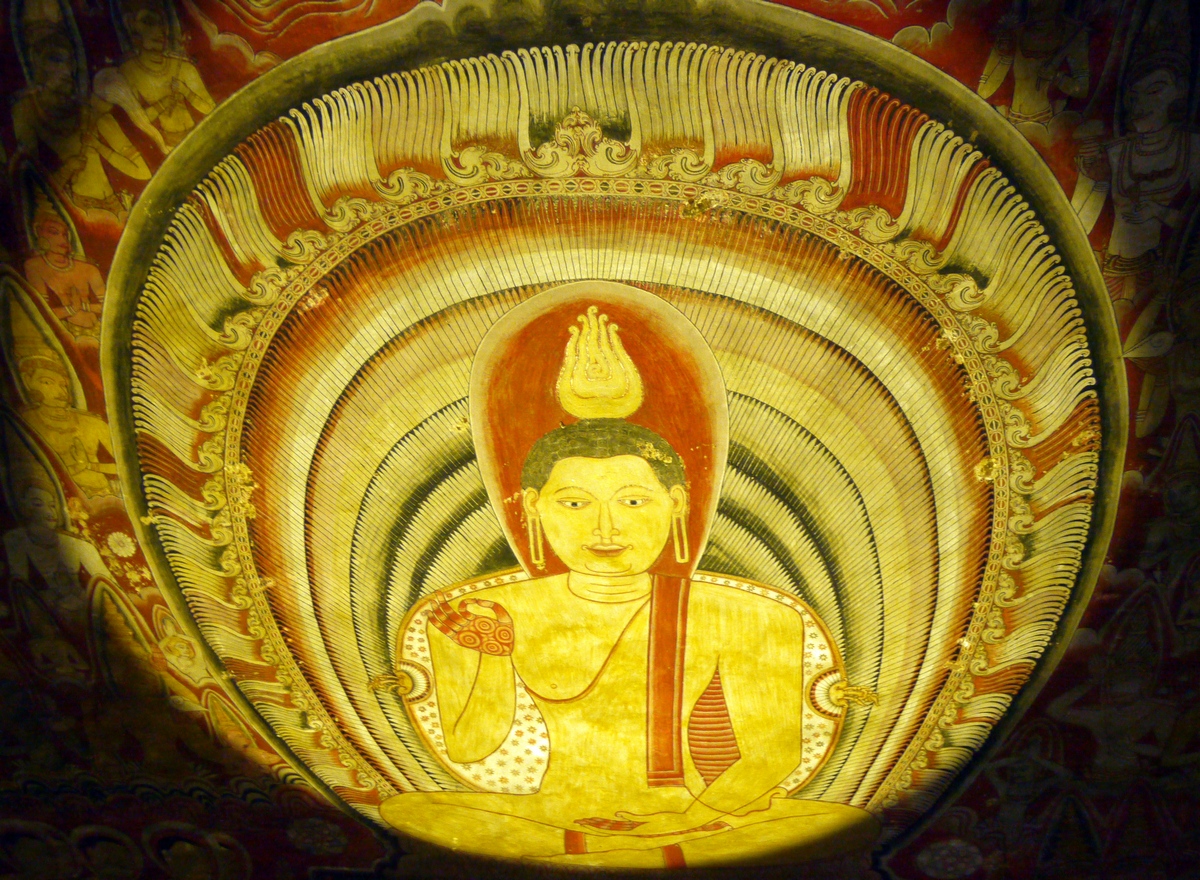