It was the end of the 19th century. Erwin Perzy, a producer of surgical instruments, was sitting in his workshop in the 17th district of Vienna and trying to develop a strong bright light source that could be used as a surgical lamp. He was just making experiments with the so-called Schuster lamp – a flask filled with water which he put in front of a burning candle to increase the candlelight. Erwin added metal fillings to the water to intensify the reflection. These floating glittering fillings reminded him of snowing. And he got an idea!

Erwin Perzy made a miniature model of the basilica in the famous Austrian pilgrimage site of Mariazell. He put it in a glass ball with a diameter of 4 cm, filled it with water and put ground rice inside. After shaking the ball it looked as if it was silently snowing on the basilica. This is how he built his first snow globe – a gift for one of his friends. But it was such a success that in 1900 he and his brother Ludwig decided to establish a company producing snow globes and got the first patent for it. The production in the family firm continues until today – Erwin Perzy III. belongs to the third generation. 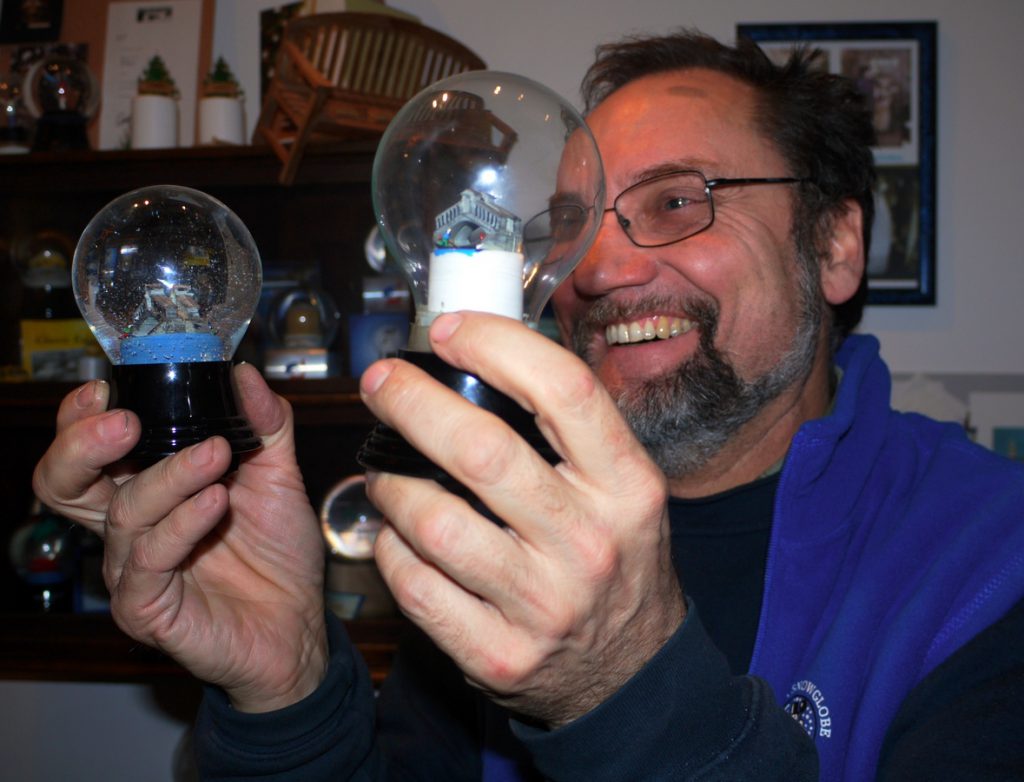 Visiting the workshop where its owner explained to us with enthusiasm the production we felt like Gulliver among Lilliputians, there were miniature models of houses, churches, benches, trees, animals, human figures… everywhere around us. 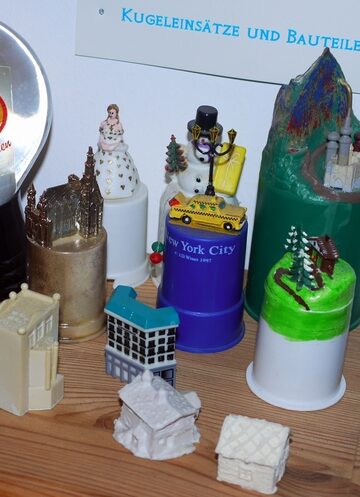 Today, the family company produces about 300-500 thousands of snow globes a year. They have more than 1.000 models and forms which they put inside the globes. 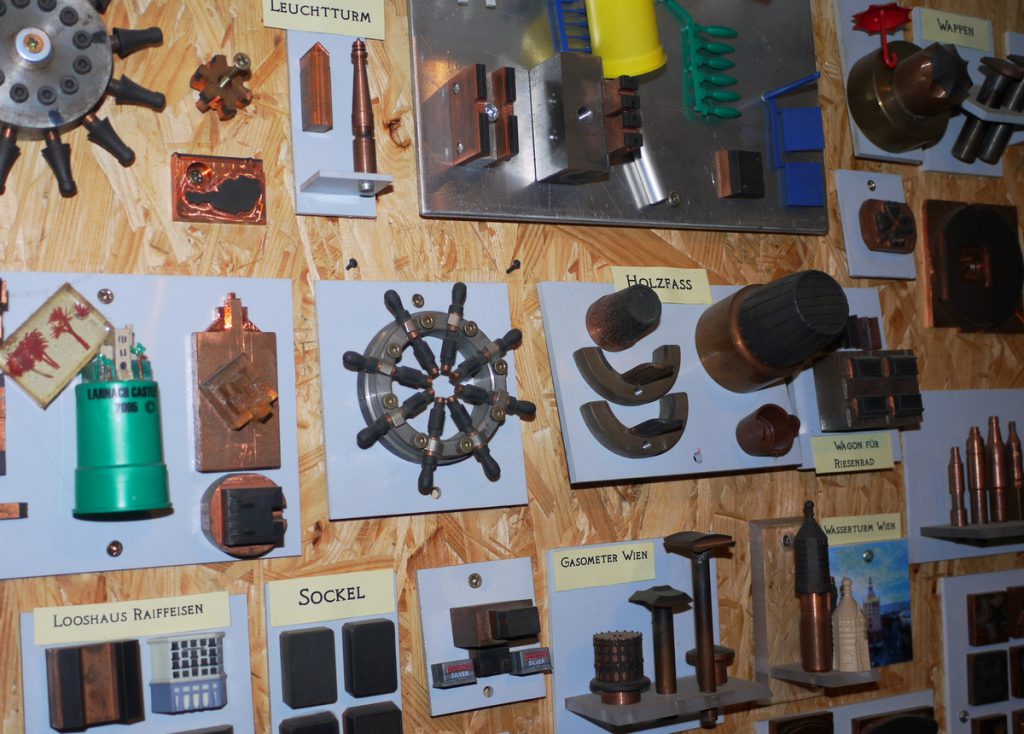 Snow globes inseparably belong to the Christmas atmosphere in Vienna. They are still produced here by hand, but of course, there are some changes in their production. In the 1950s the glass was replaced by plastic. However, the material of which the “snow” is made is still a production secret. You can easily distinguish the original product of Vienna from cheap copies: the snow should not sink down to the bottom very quickly but it should float in the globe very slowly and sink as long as possible, it can take even two minutes. Can you imagine – snow globes were used in the Emirates during science classes to explain to pupils what comes down from the sky in the winter in our latitudes! 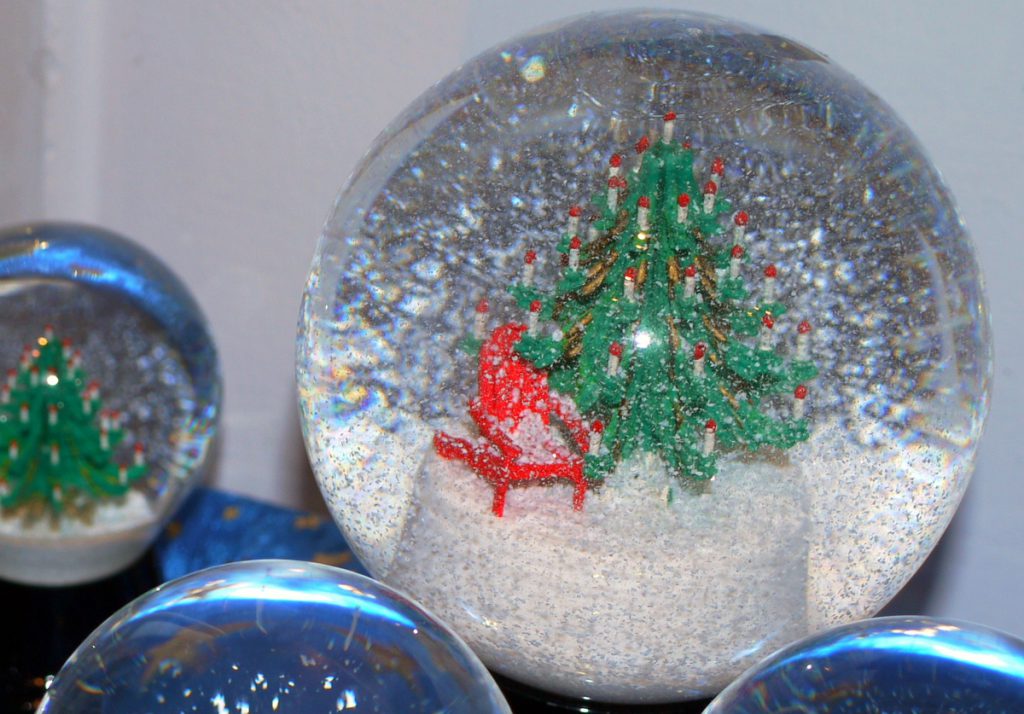 The smallest globe has a diameter of 11 mm and weighs 1 gram only. There are 0,6 ml of water and a 3,6 mm figure inside. The biggest one has a 15 cm snowman inside, a diameter of 35 cm, a weight of 31,4 kg and 22 l of water. The most expensive snow globe has been made for a collector, with the model of the Stephansdom made of gold inside. 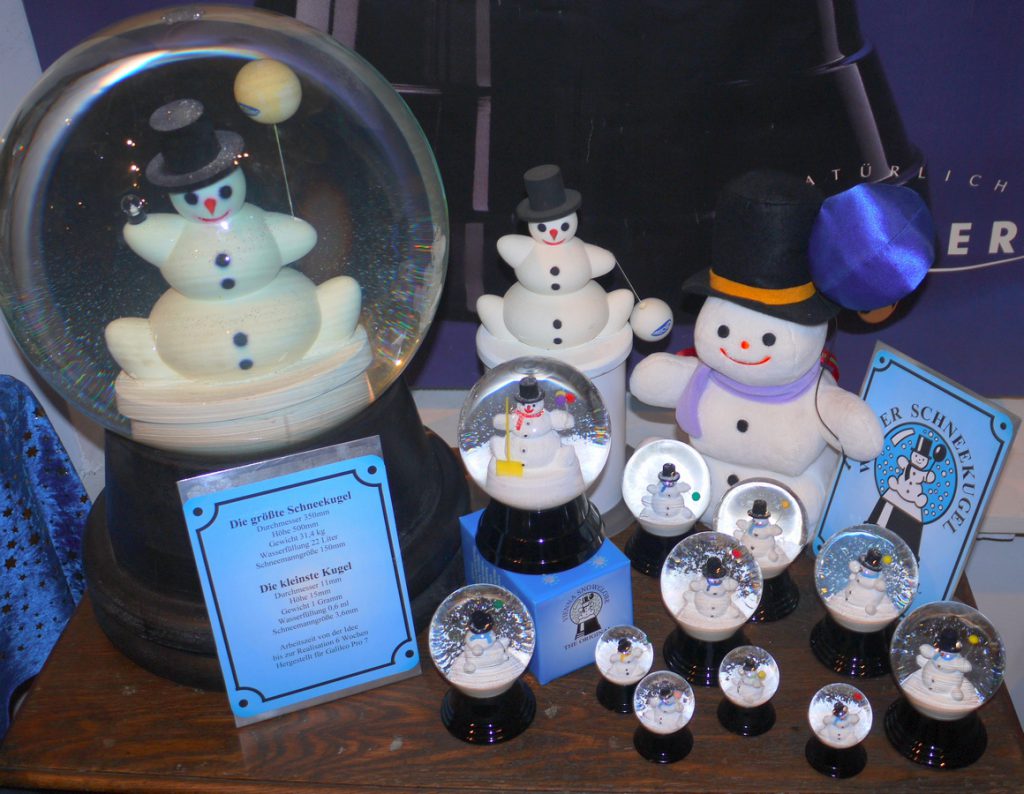 In 1995 the company returned to the production of 25 mm globes again, which was the original size produced by the inventor Erwin Perzy who even received a special award from Emperor Franz Joseph for it. Also, today these models belong to the most popular ones. 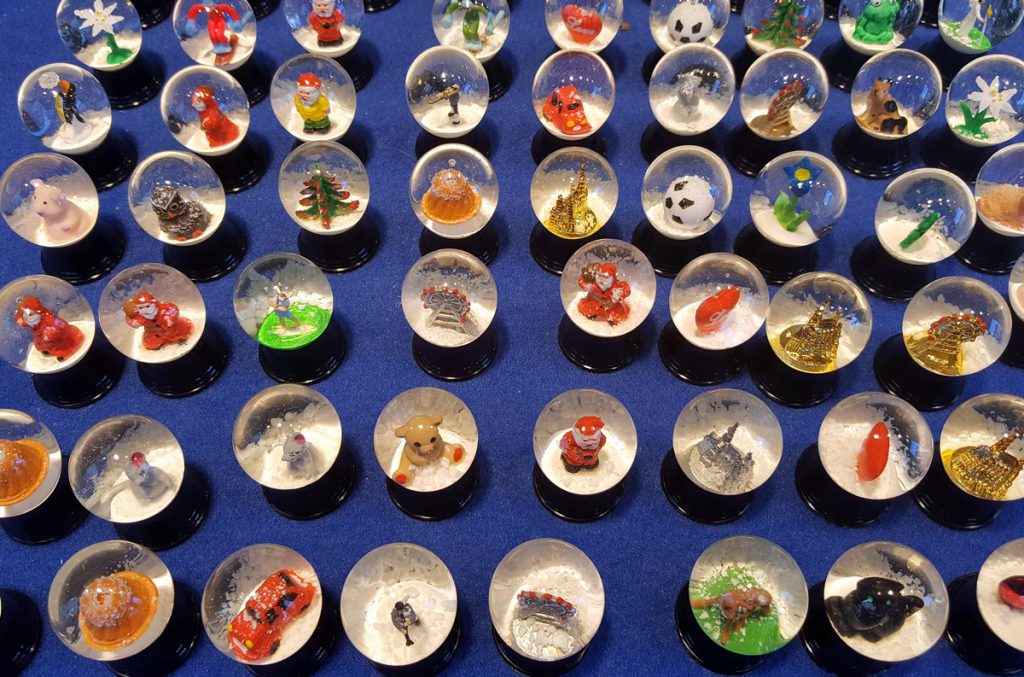 Erwin Perzy III. told us also about some special models which are made on order. There are even clubs of collectors in some countries. But he also proudly showed us some articles from newspapers about the snow globe which was given to Bill Clinton when he had become the American president. The base was made of solid silver and the snow globe contained the original confetti used at his inauguration party. 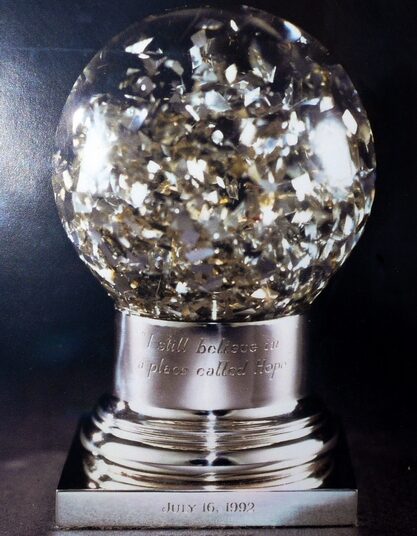 We were also shown a model made for Barack Obama – with his whole family and dog. 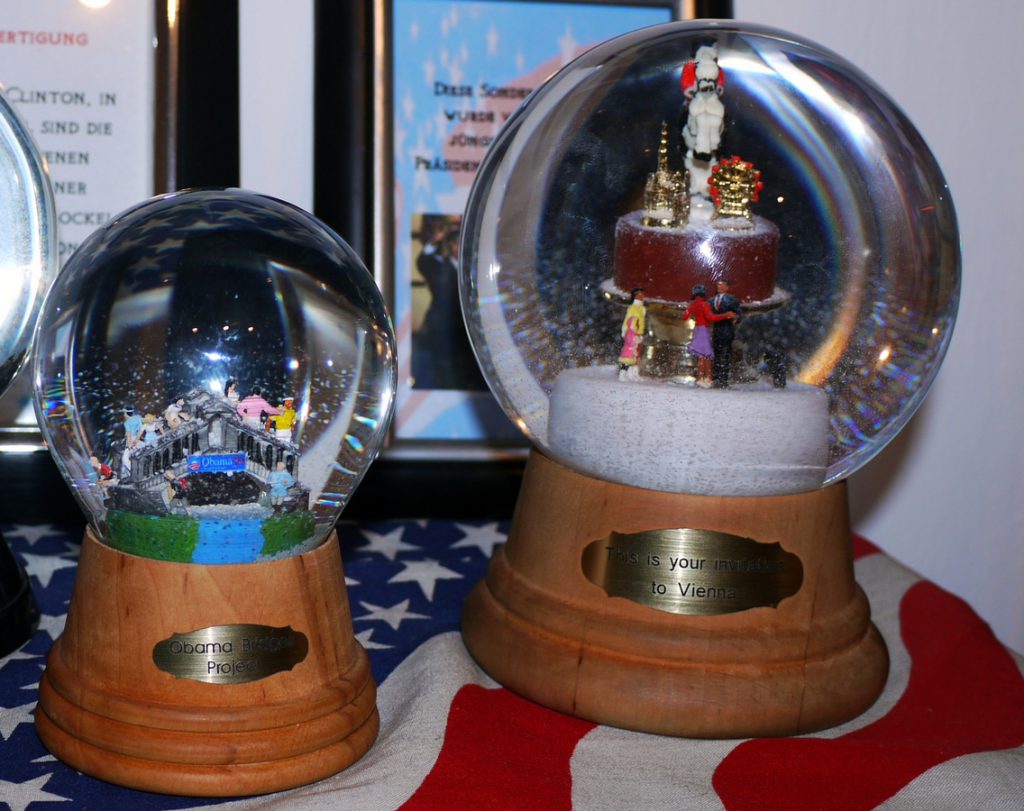 Typical Viennese motifs belong to the most sought-after ones: Stephansdom, Ferris big wheel of Prater, the City hall with the Christmas market… 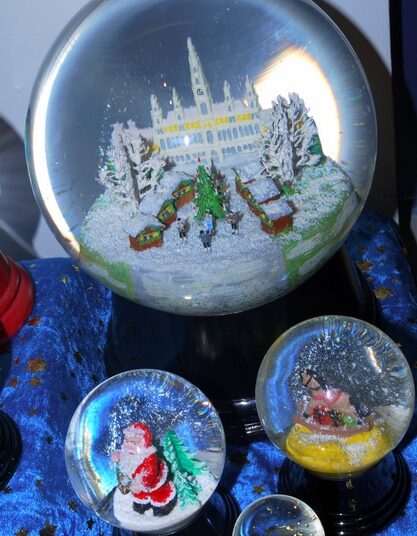 Christmas motifs are the second most popular ones: snowmen, angels, Santas, Christmas trees… But today they must compete with pets, comic figures and other modern heroes. The magic globes where it snows are exported worldwide, especially to the USA, Canada and Japan. 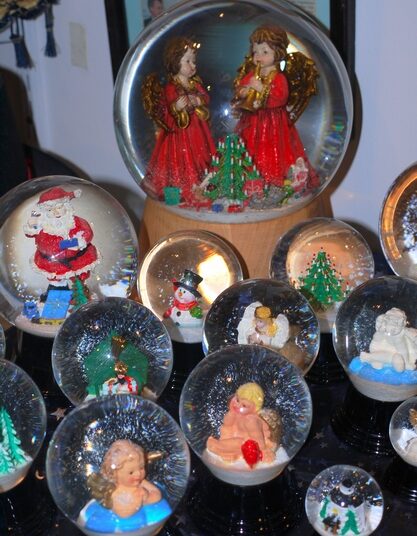 And what motive for an idyllic world kept in a transparent ball would you like to have?

Address of the workshop, shop and museum: Schumanngasse 87, 1170 Vienna

How to get there: use the website of the public transport in Vienna: www.vor.at 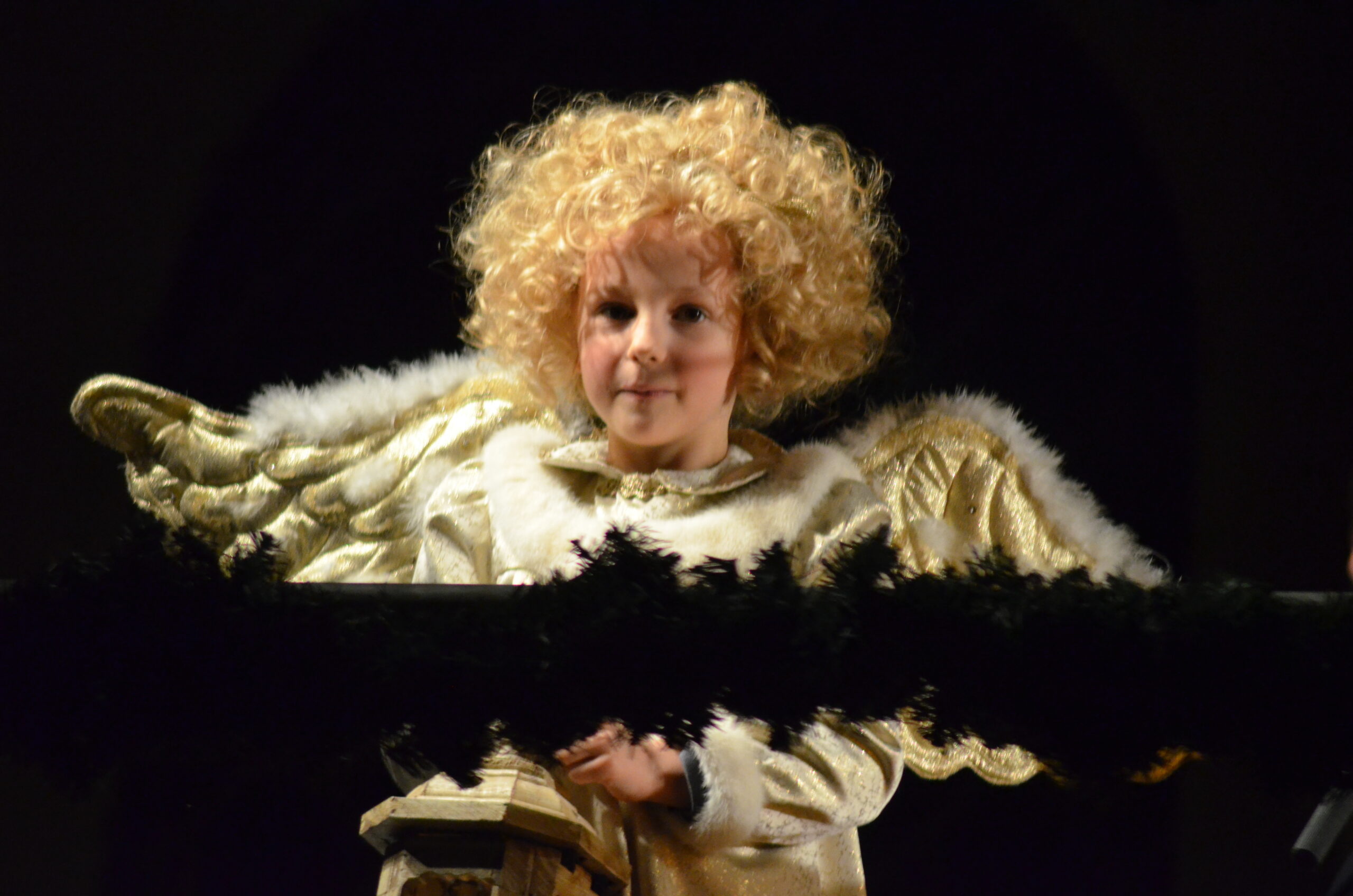 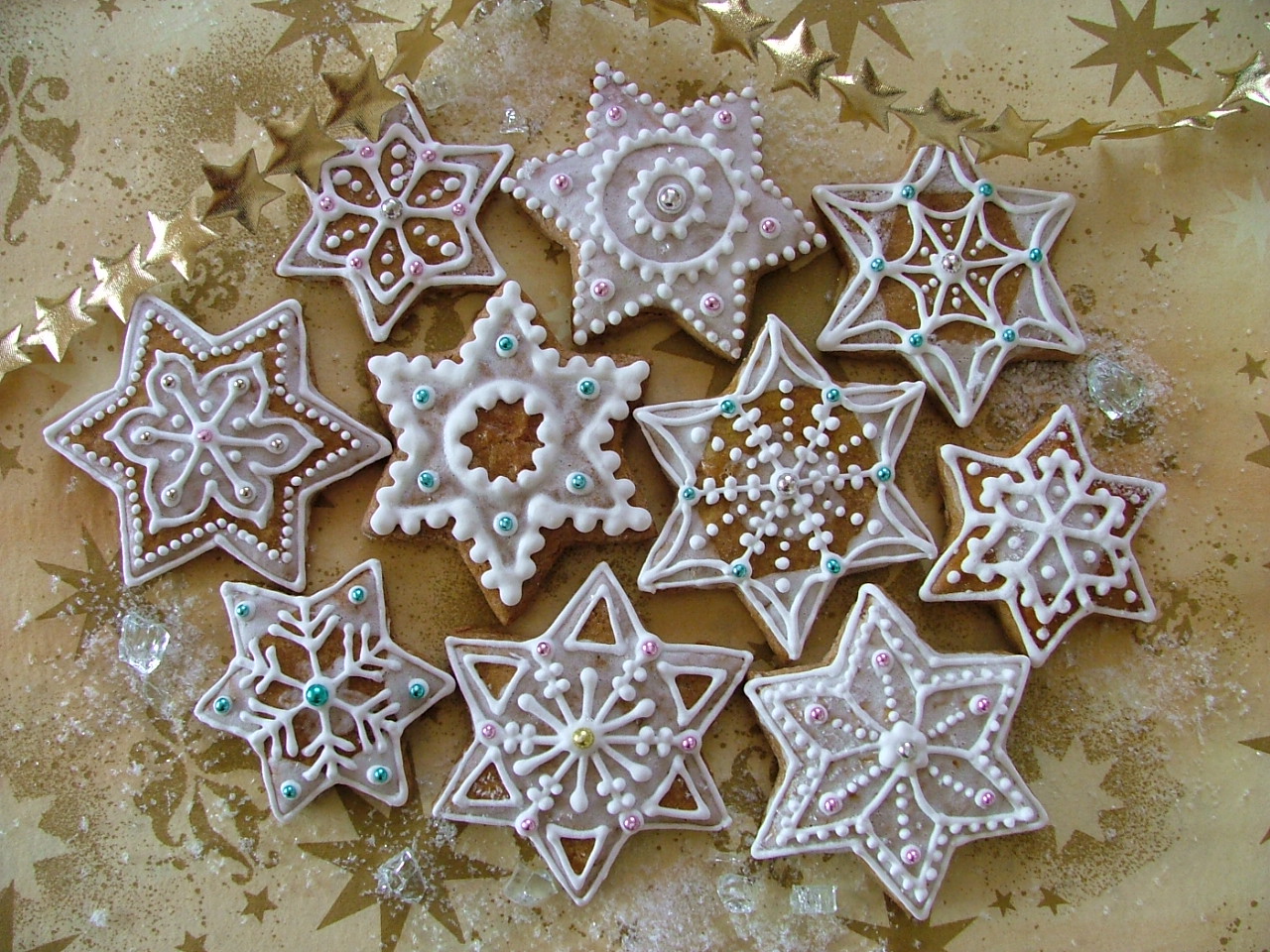