by Ingrid
in Belgium, TRAVEL
0

For the third day in Brussels, I reserved the tips on the most beautiful views of the city. Because when I visit a city, I always try to look at it from above – you can better understand its architecture and the dimensions of some buildings. 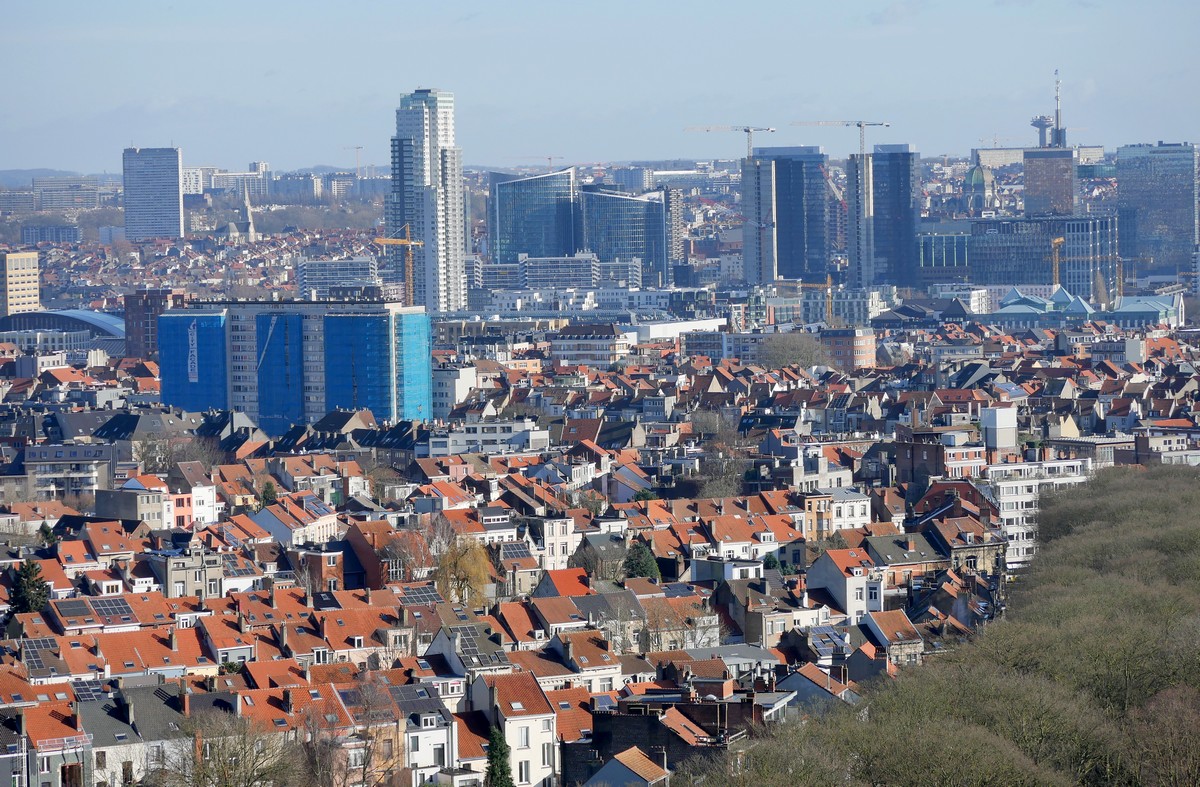 As I mentioned in the first article, the yr.no website for the weather forecast reliably determined for us the day when the weather was supposed to be beautiful, and we decided to use it for these vantage points:

(1) The first place I would like to recommend has already been mentioned in the article Day 2 – it is Mont des Arts. It is a very lively place, the nearby museums attract many tourists. In nice weather, you can enjoy the view of the city hall tower from here, and the figure of Archangel Michael at its top can be seen more clearly. The silhouette of a monumental building can be seen in the distance in the city skyline as well. 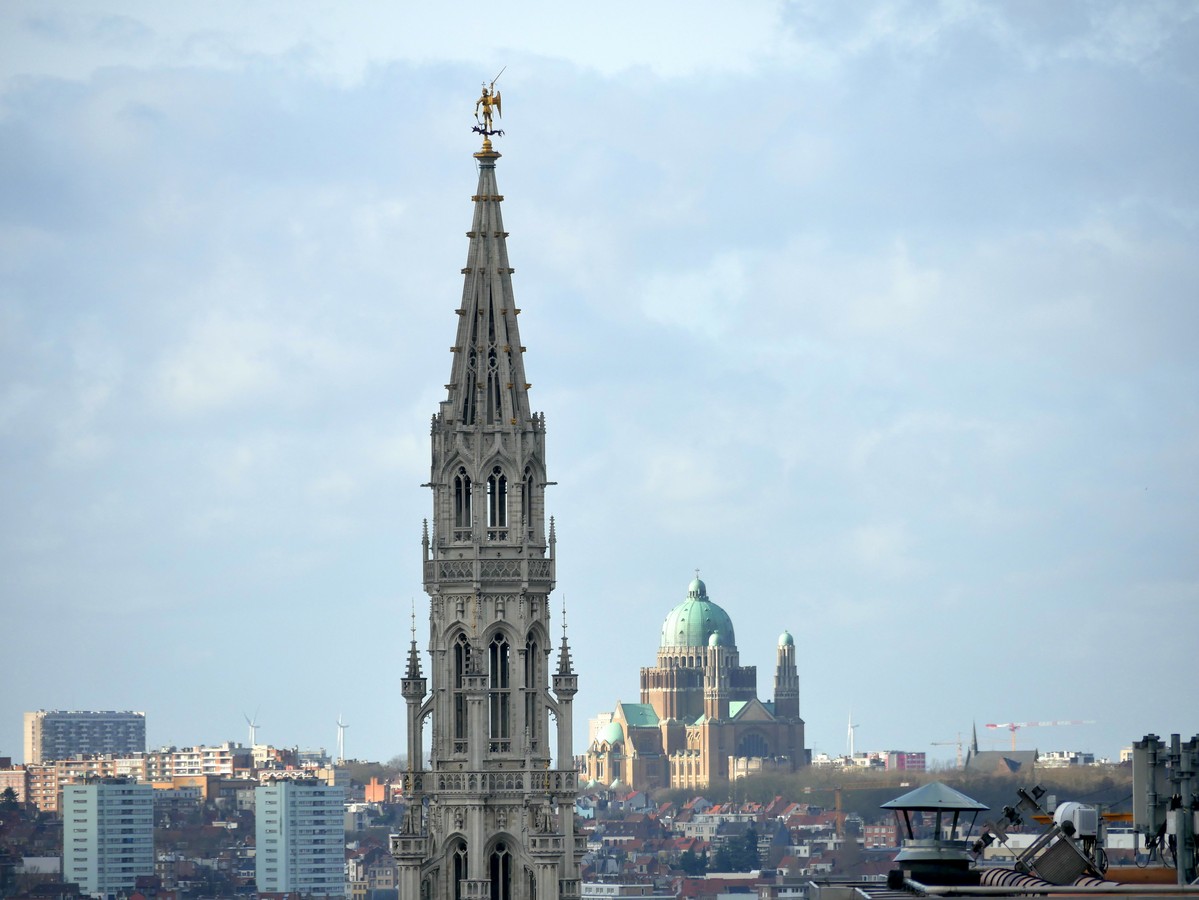 (2) The above-mentioned building is the Basilica of the Sacred Heart – Basilique Nationale du Sacré-Cœur. You can reach it by subway M2 or M6, station: Simonis, but you have to walk for a while, too. It’s a bit like a Fata Morgana. As we walked toward the church through the park, the trees on both sides seemed to stand in a guard. It seemed to us that we were close, but we were not, we still had to walk on and on…

This delusion is caused by the huge dimensions of the basilica, as it is the 6th largest church in the world: 89 m high, 167 m long and 108 m wide. 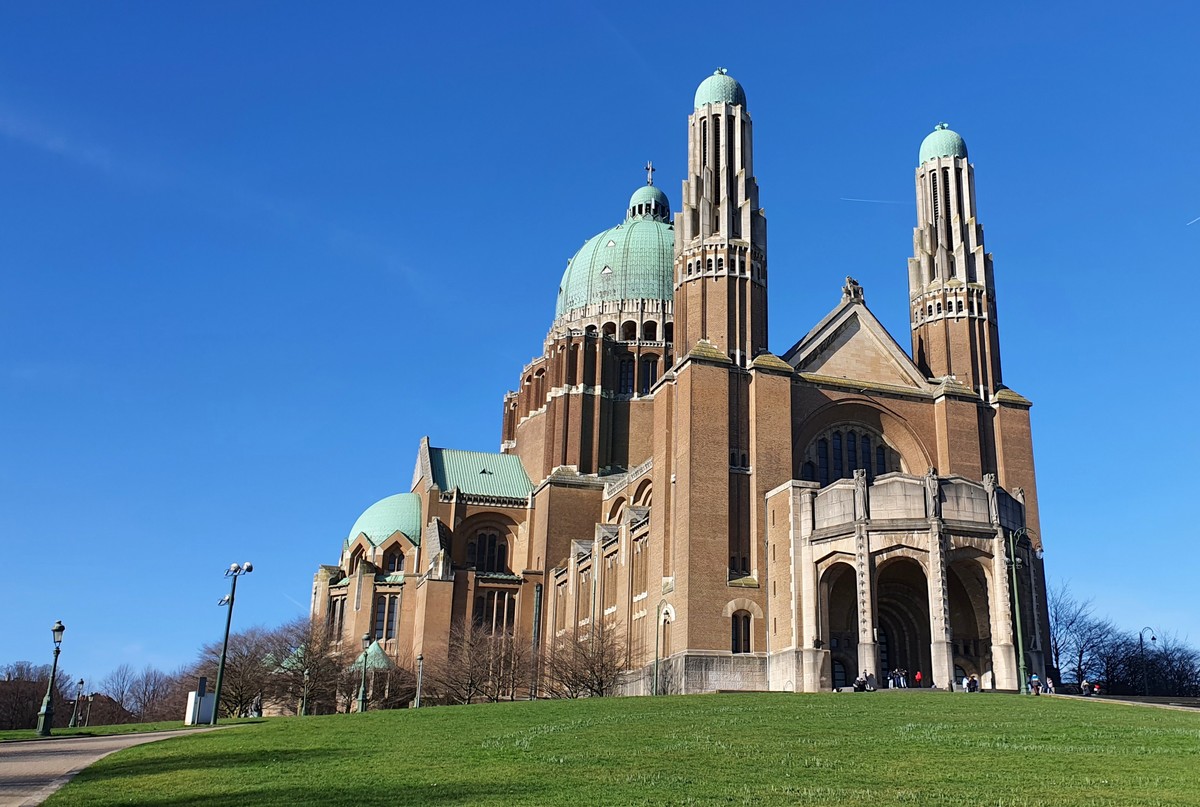 Koekelberg Hill has long been asking to build something special on its top. In the middle of the 19th century, King Leopold I dreamed of turning this place into a royal residence, his son Leopold II. was thinking of a pantheon dedicated to famous Belgian personalities. However, when he visited Paris, he liked the Basilica du Sacré-Cœur so much that he decided to build a pilgrimage church instead. Thus a plan for a magnificent neo-Gothic building was created. The king laid the foundation stone in 1905. When the foundations were completed, the First World War broke out. Financial problems caused that the plan, style and architect had to be changed. The construction was then slowed down by World War II, so it continued until 1969 when the copper dome with a diameter of 33 meters had finally been completed. 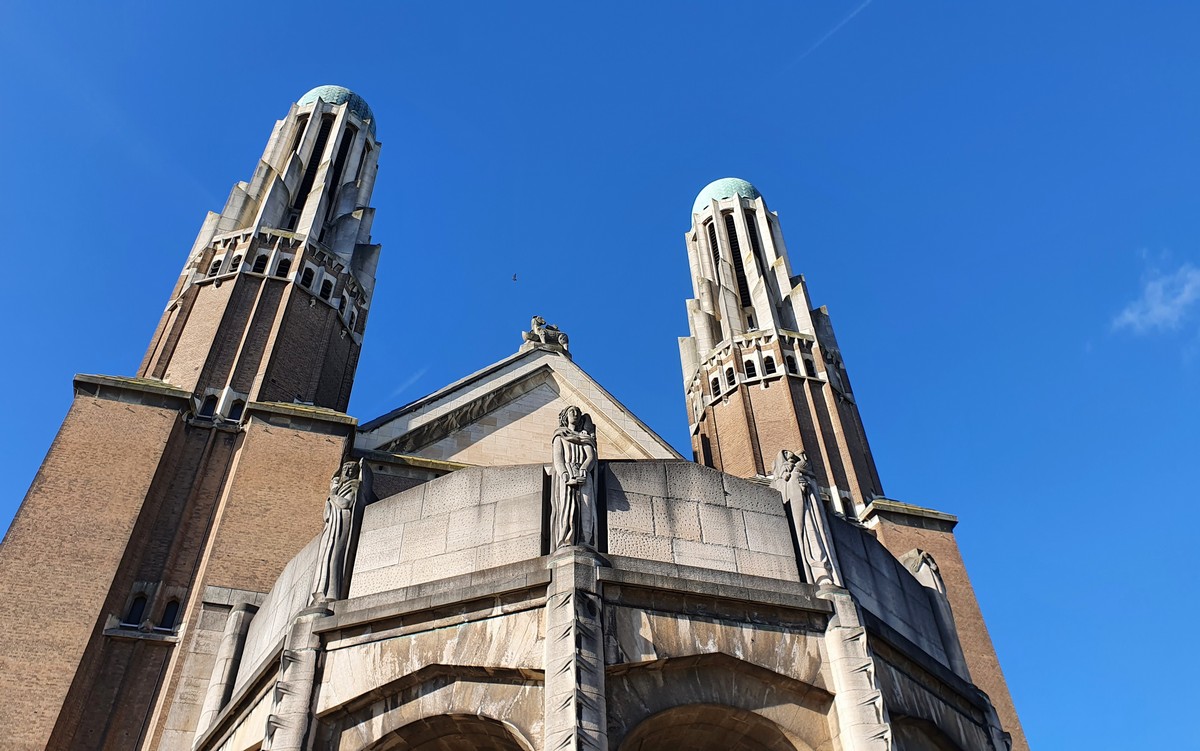 The interior and its dimensions are just as stunning. The basilica is the largest Art Deco building in the world. The statue of Jesus at the altar is 4 meters high! The church can accommodate more than 2,000 people and is used not only for holy masses but also for conferences and exhibitions. 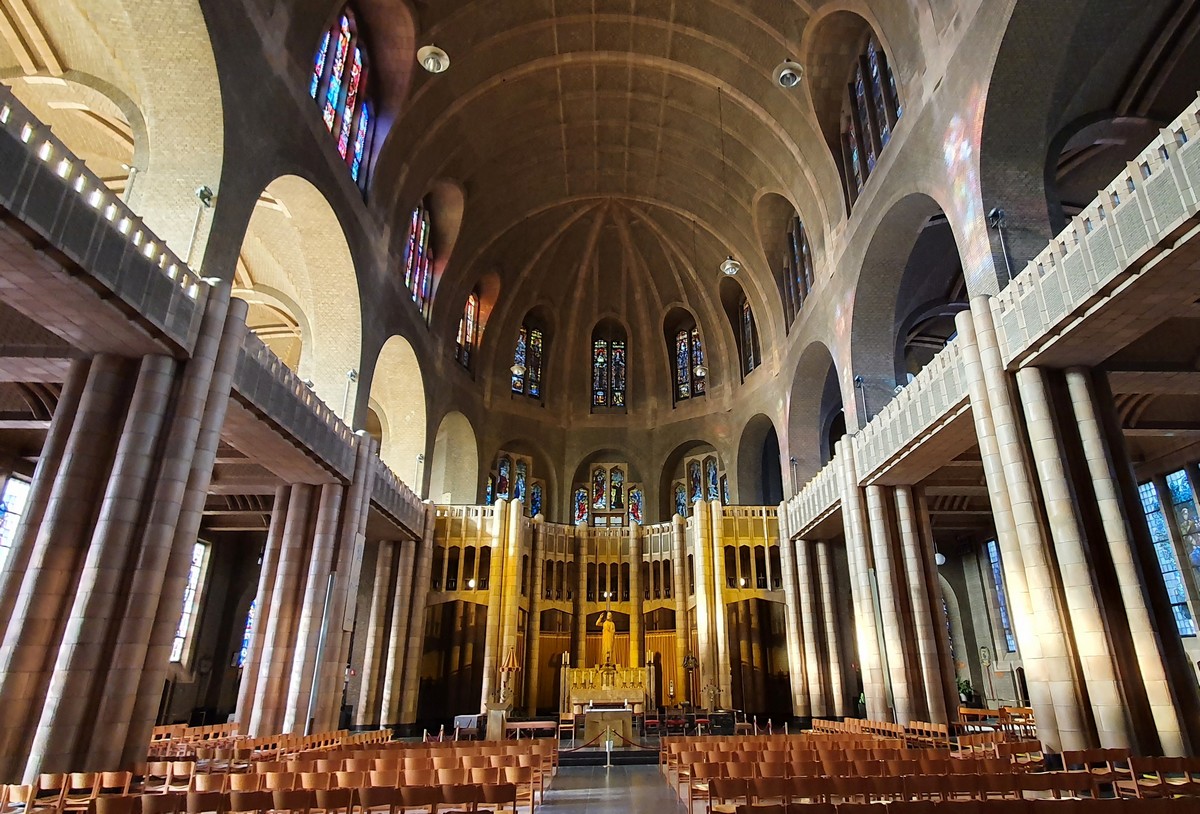 There is an elevator in the basilica (small fee – payment only by card!) which will take you to a height of 53 meters to the platform at the dome (or 243 stairs). From here, you will have an interesting view of the massive towers of the basilica, but also of the city. Who will find the city hall tower now? 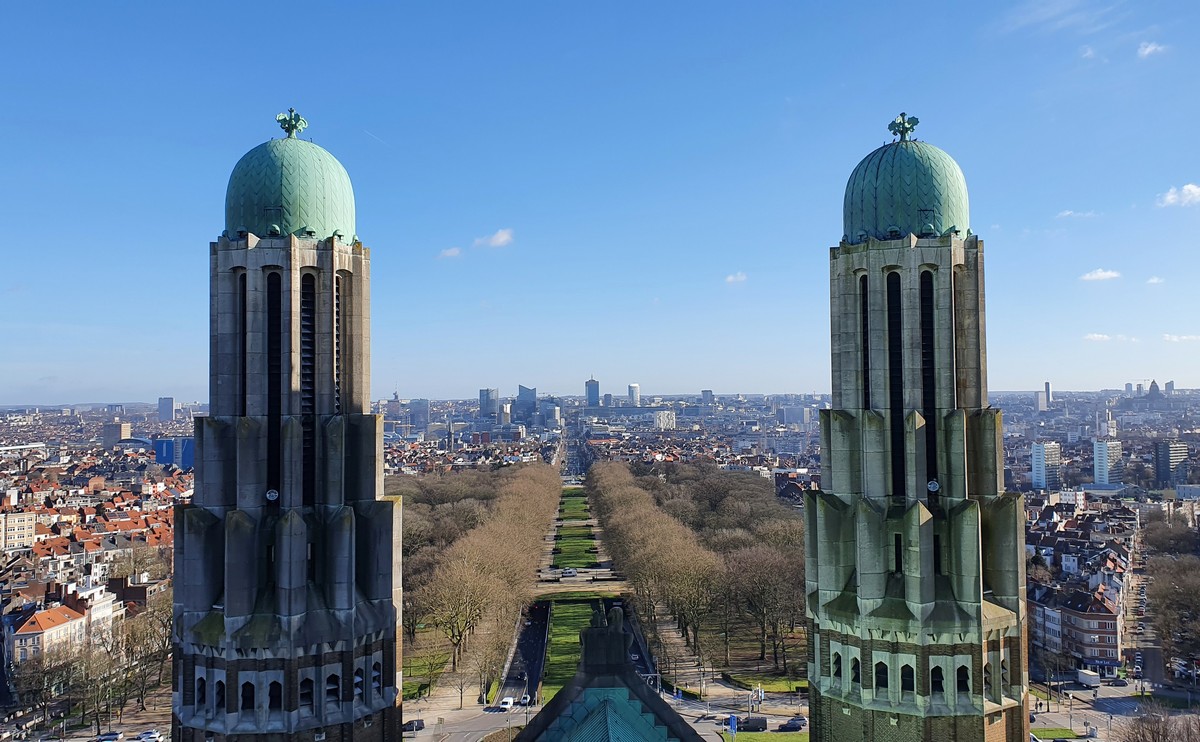 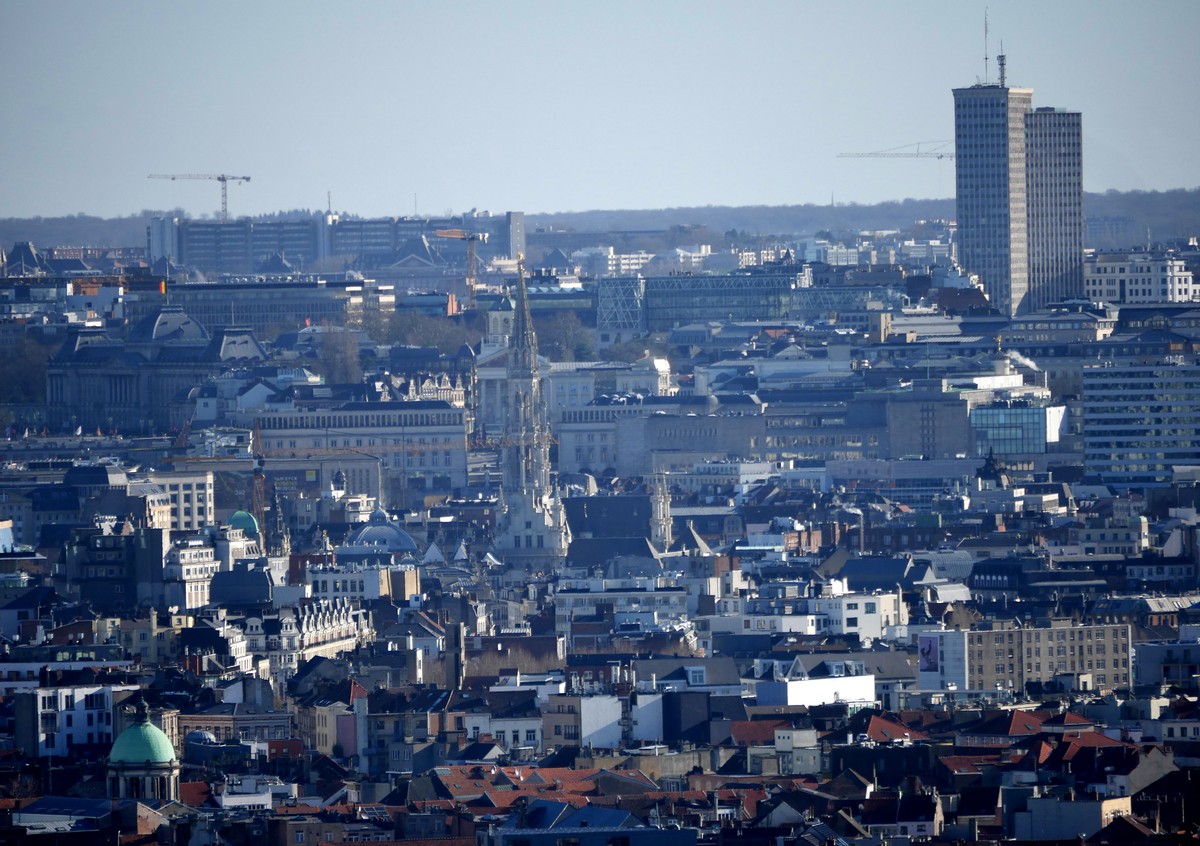 From the basilica, you can see another building – the Atomium – our next stop. 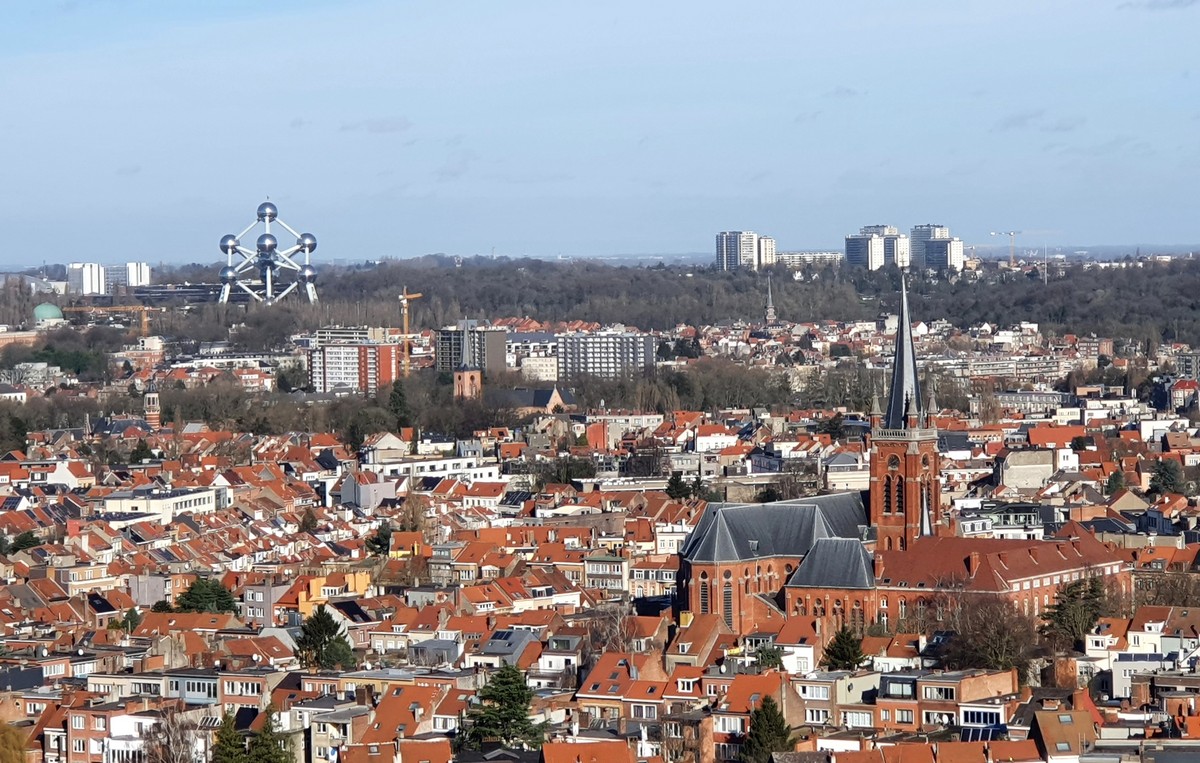 The Atomium is one of the iconic symbols of Brussels, perhaps even Belgium. It has another specific meaning to me. On my first visit to Brussels – when I used to live behind the Iron Curtain – I had seen the Atomium only from afar. I really wanted to get there, but since it’s located outside the historic center, I didn’t have time for that. I didn’t know if I would ever be able to go to the West or return to Brussels again, so the Atomium became a symbol of unattainability for me… Although I visited Brussels later, I only now had the possibility to visit the Atomium.

In the 1950s, Brussels was preparing for the EXPO 1958 World’s Fair. Usually, every such exhibition also has its own flagship building. In Brussels, according to the first design, it was to be a huge concrete tower. But because it looked quite like the Eiffel Tower, the sponsors refused to fund the project because it lacked originality. So the architect André Waterkeyn came up with a proposal to build the Atomium – it represents an iron crystal magnified 165 billion times. 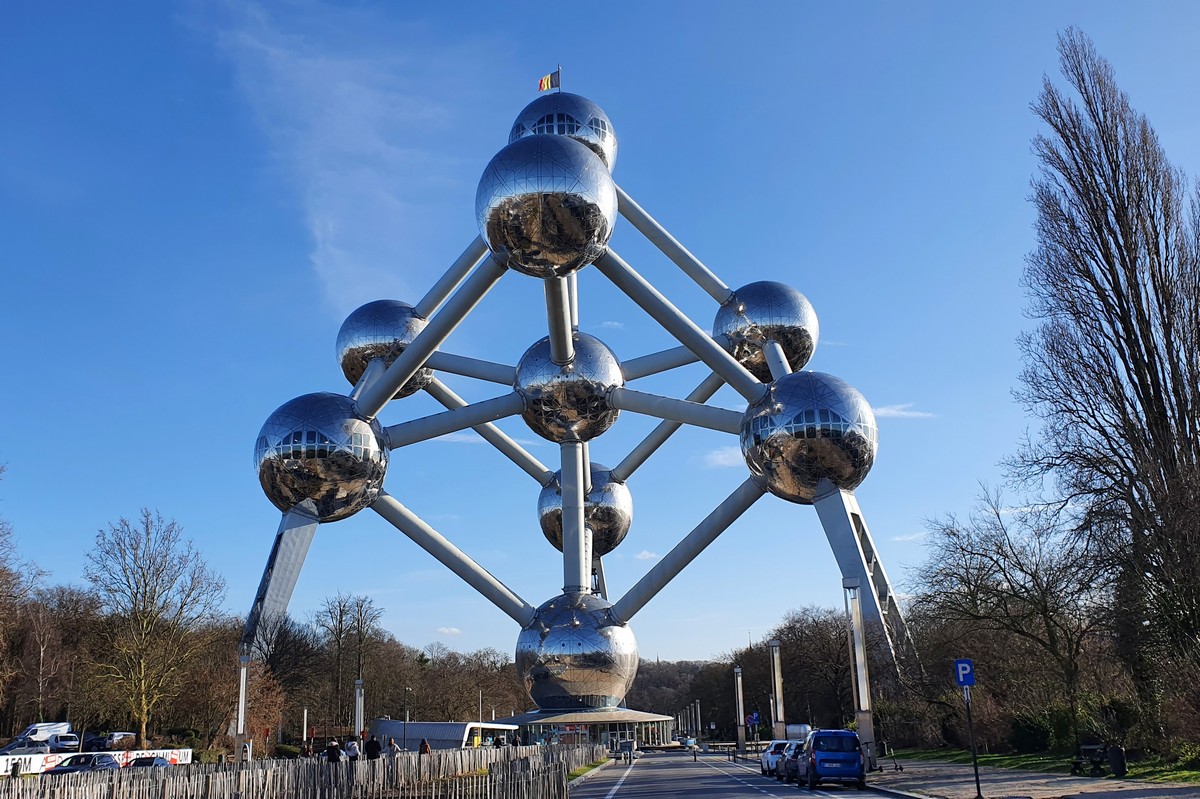 As World War II was still in the memories of the people in those years, the Atomium was supposed to symbolize the hope that atomic energy could also be used for peaceful purposes. However, it was not planned that the 102-meter-high monument should remain standing here after the World’s Fair. However, the inhabitants did not want to give up this symbol; it underwent a major reconstruction at the beginning of the 21st century and is now one of the most sought-after attractions in the Belgian capital.

From a distance, the Atomium reminded me of a children’s magnetic kit with nine (oversized) silver balls. In fact, those spheres have a diameter of 18 meters and are connected by tubes that are 23-26 meters long. 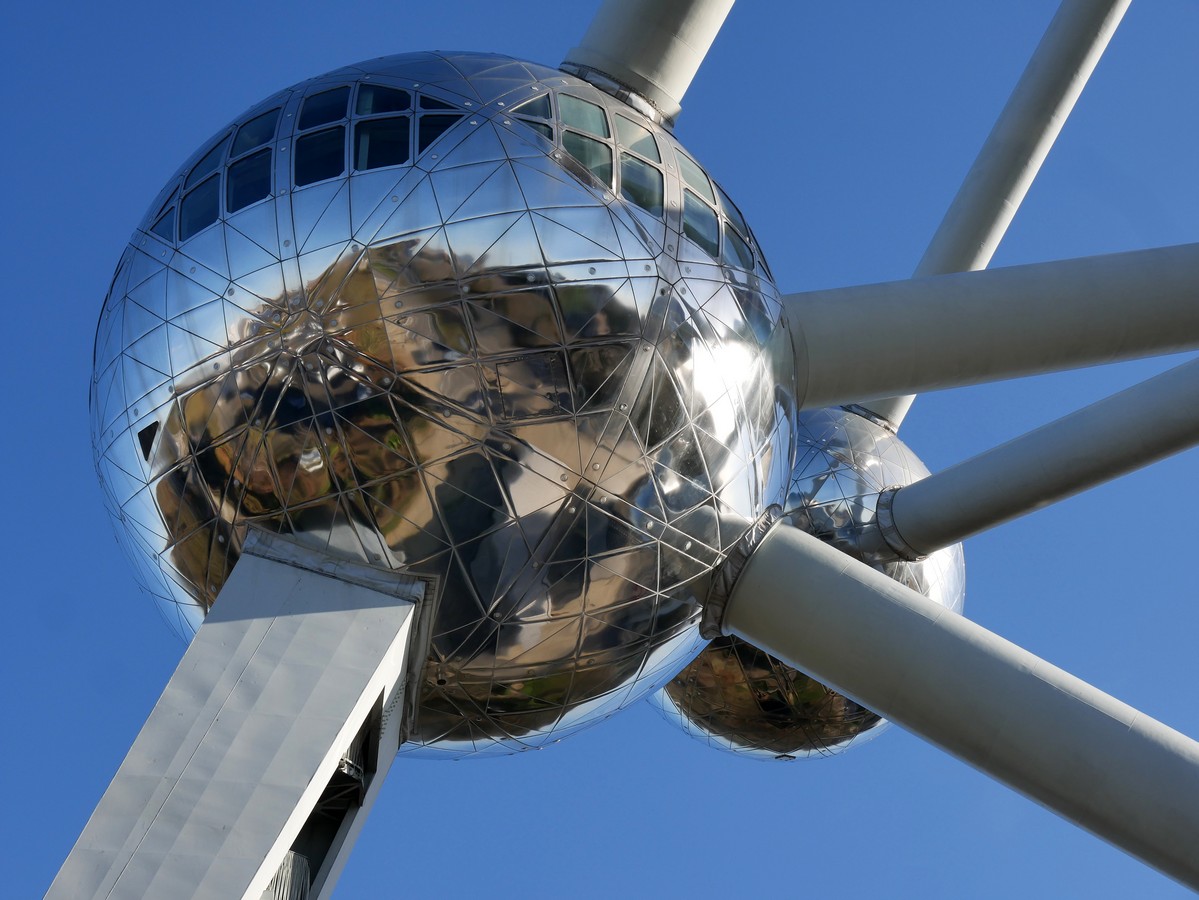 You can reach the monument by subway: M6 – Heysel Station. Opening hours and admission fees: Atomium

When I visited the Atomium, there were no crowds of tourists, but it is recommended to book tickets online. 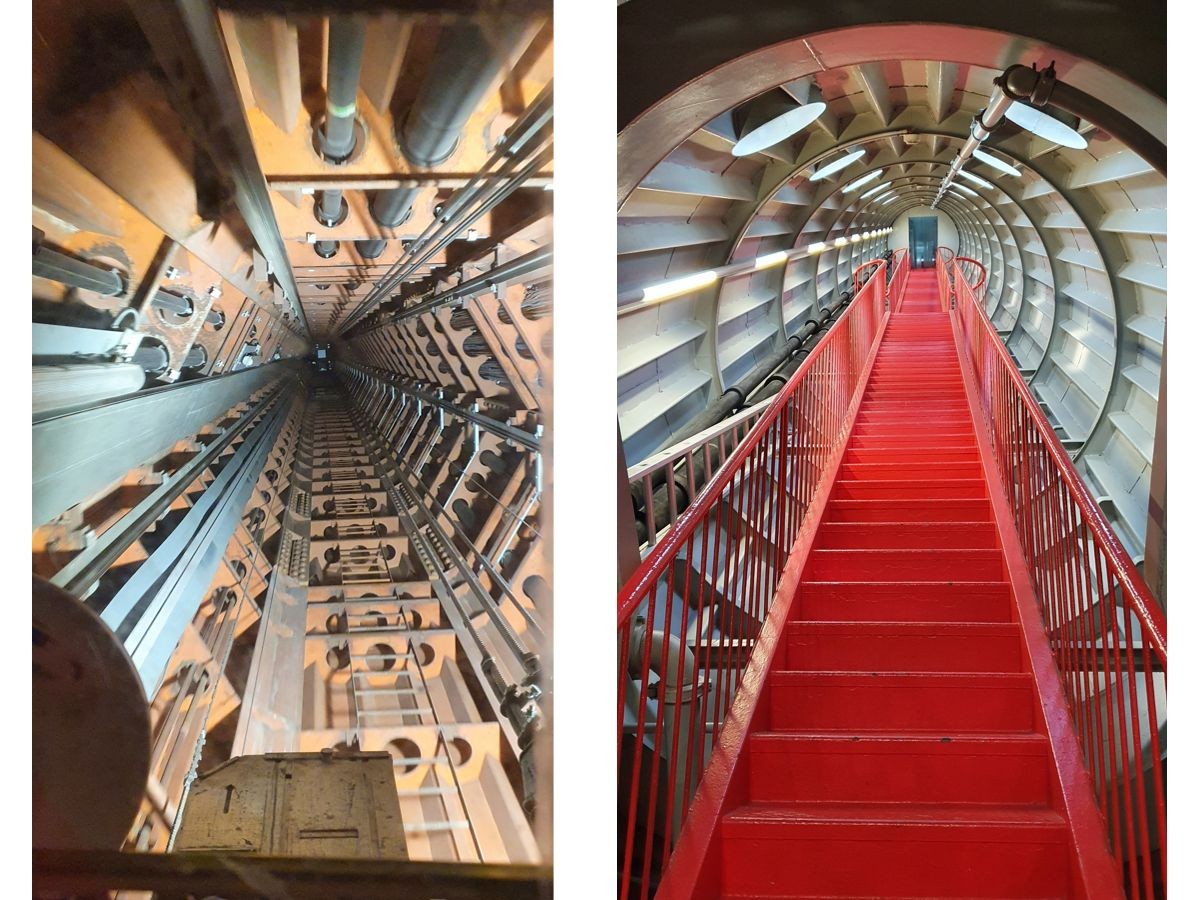 You definitely need to go inside too! First, the elevator will take you to the highest sphere, then you can explore the others. Inside some spheres, there are modern light installations, escalators run in the tubes, which also change their lighting. There is also a nice restaurant in one sphere. 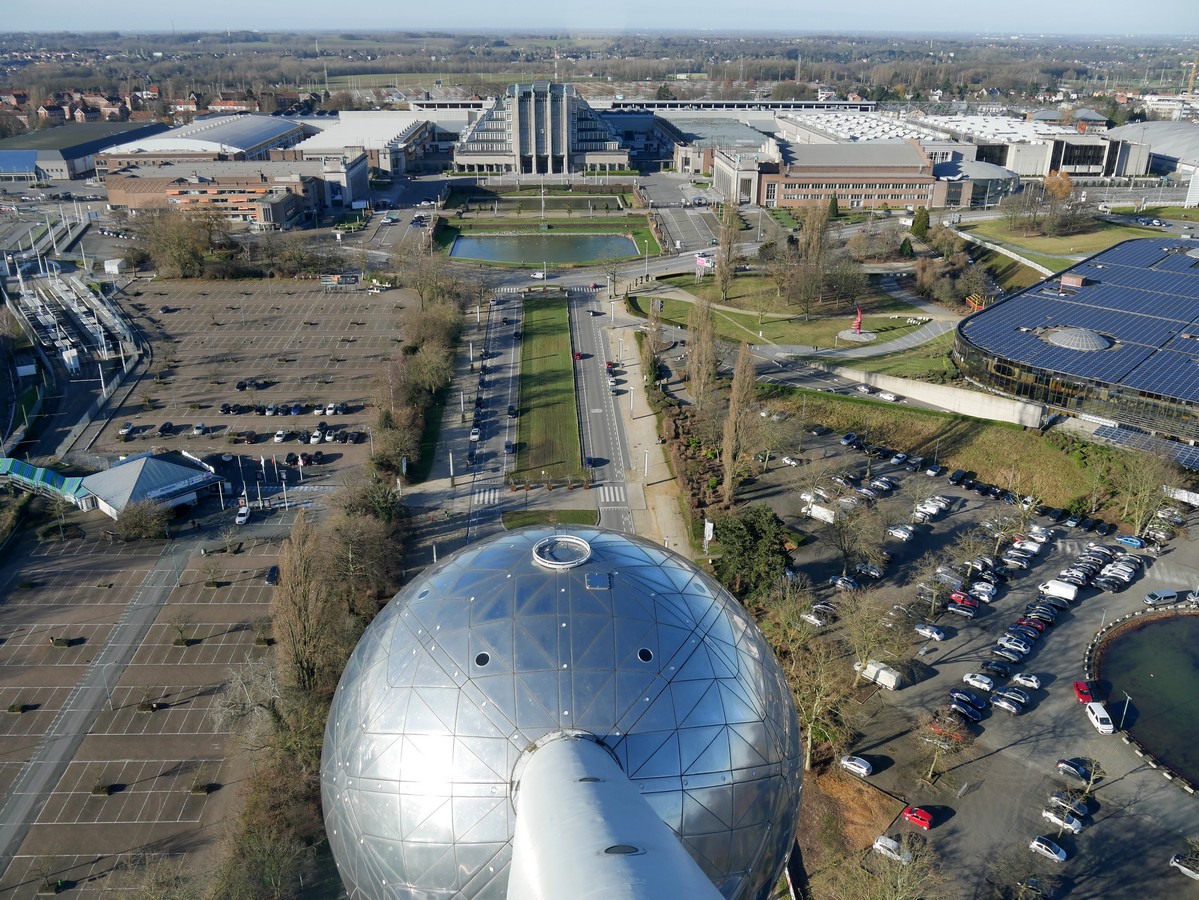 The view of the surroundings is nice, but the city is not visible as much. However, you will see another attraction – Mini-Europe – with replicas of Europe’s most famous buildings and monuments. It was still closed at the time of my visit (February), but since I am not a big fan of such exhibitions I did not mind at all. More information: Mini-Europe

(4) And finally, one more tip for a nice view – the square near the Palace of Justice (Place Poelaert). We were here at the time when the sun was slowly descending on the horizon, bathing the rooftops in special lighting. From this place, you can see the basilica, but also the Atomium and the city hall. 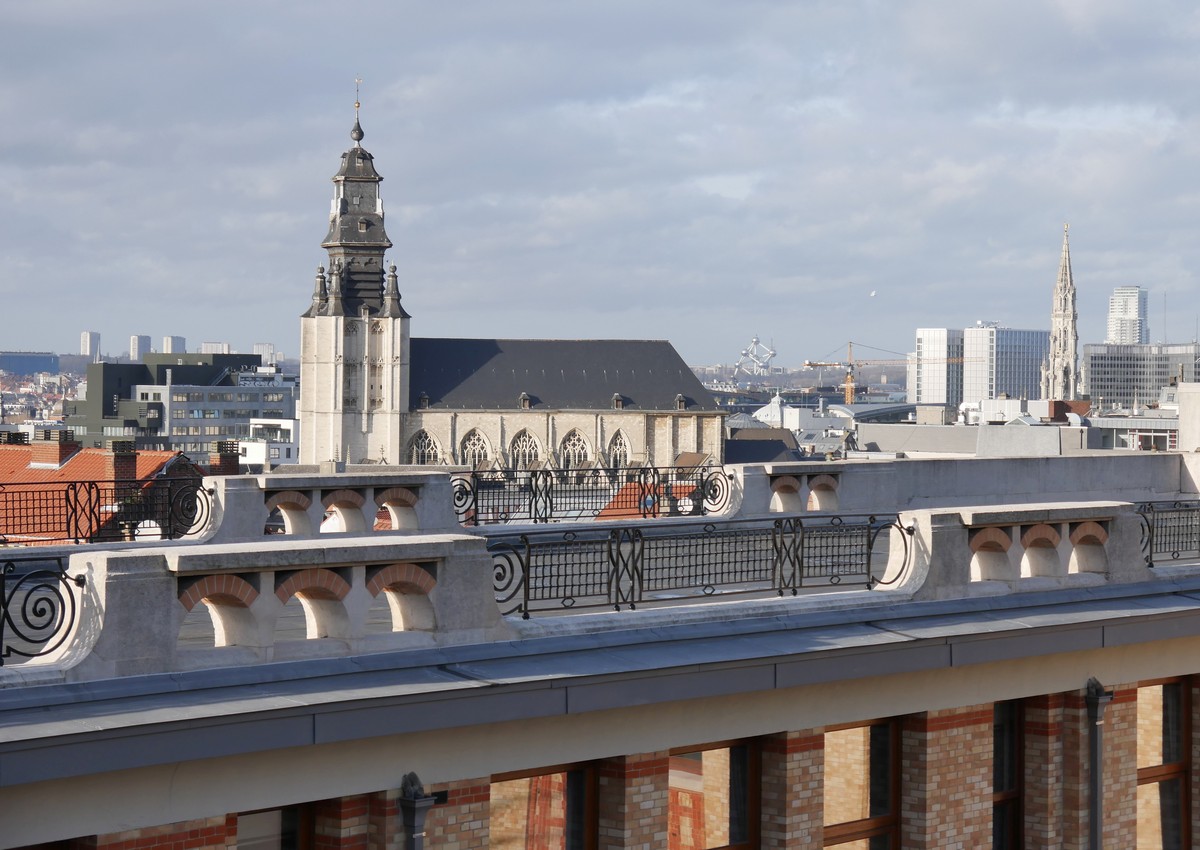 The church in the foreground is Notre-Dame-de-la-Chapelle, where the famous Flemish painter Pieter Bruegel is buried. I tried to get into it twice but it was always closed, so I only could see the painter’s statue at the church. 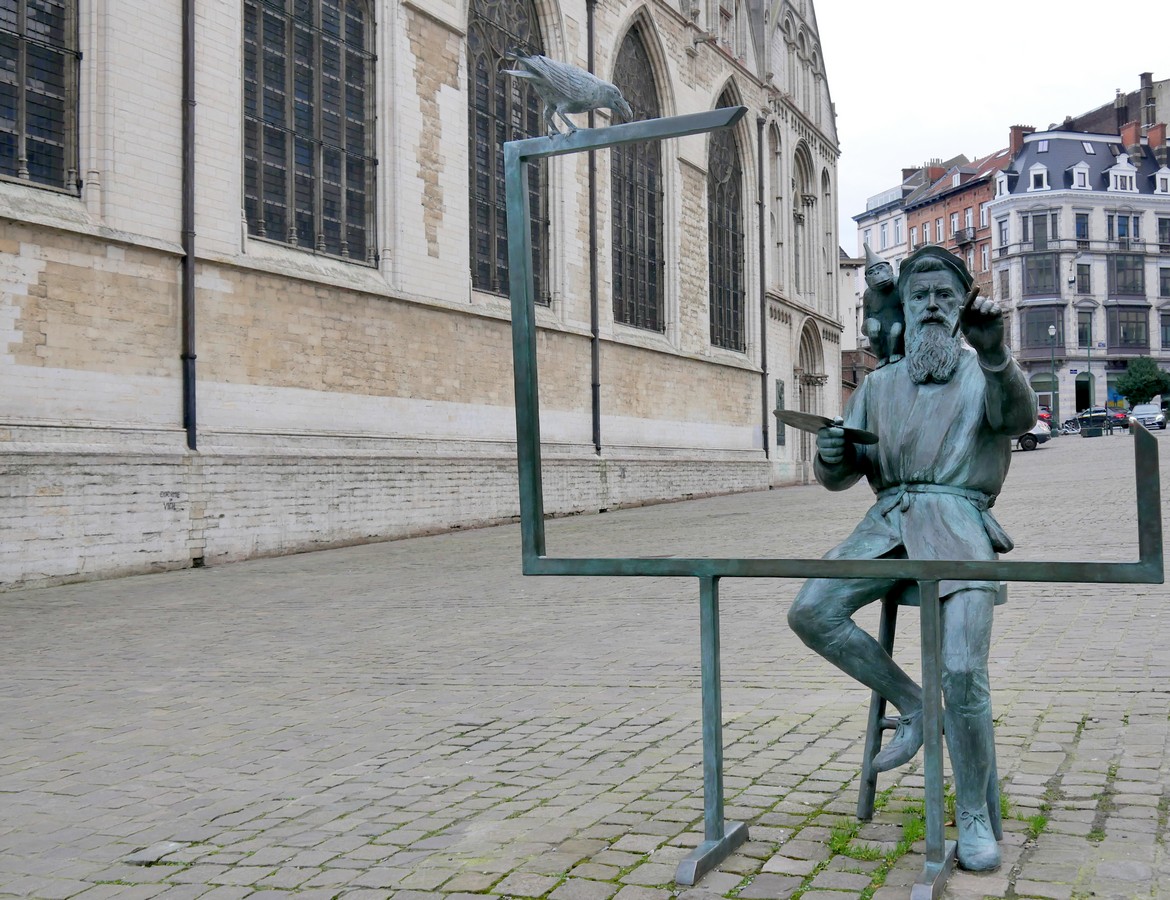 The Palace of Justice – Palaise de Justice sits above the old working-class district of Marollen, whose inhabitants revolted against this building in vain – during the construction, hundreds of their houses were demolished. The palace is a real monster, occupying an area of 26,000 m². It was completed in 1886. It was designed by architect Joseph Poelaert (mentioned already in the article Day 2), who even lived in the neighborhood. The residents were angry that they had to move out of here. The insult „skieven architek“ (shameful architect) soon became popular and is still used to name someone who cannot be trusted. And when the grand opening of the palace took place, people made it clear what they were thinking of it – destroying the chairs, cutting out parts of the pillars and urinating on the carpets. 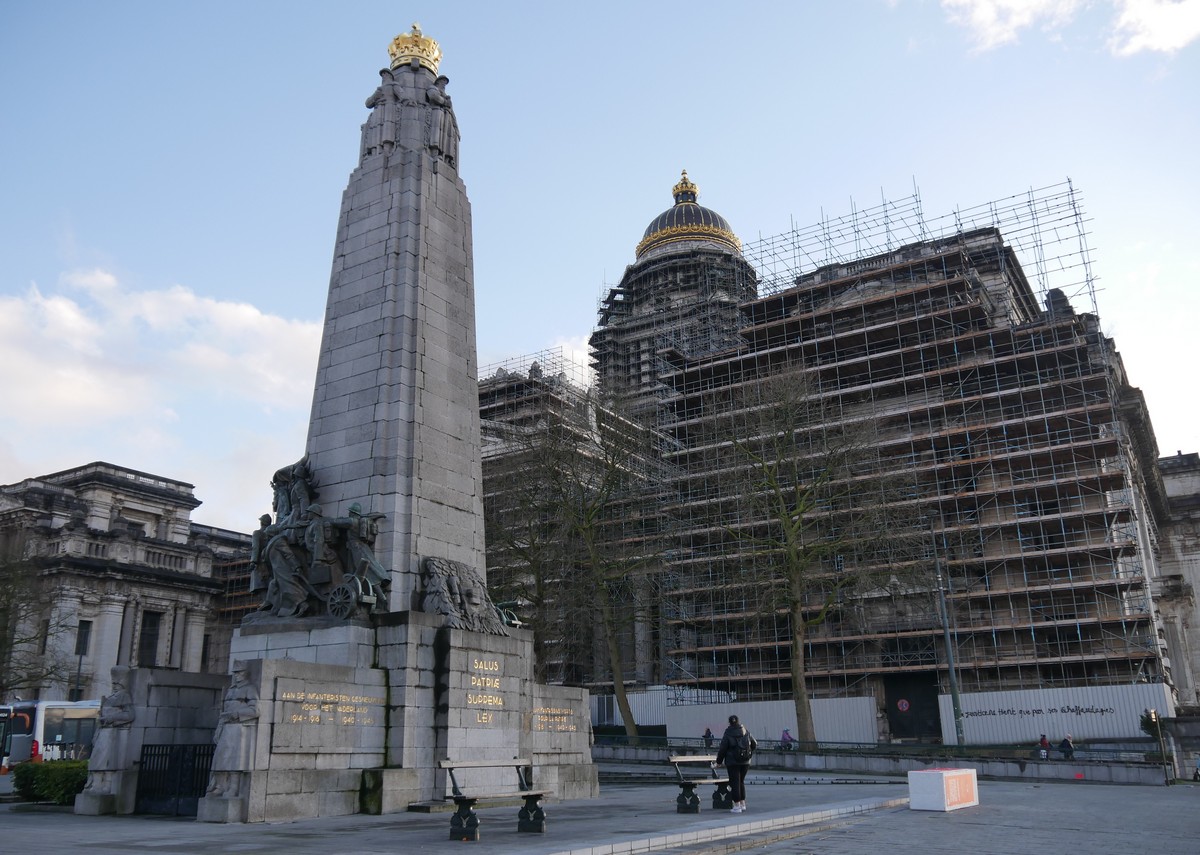 Tram 92 has a stop at the square in front of the palace. I have traveled it many times and I think it is one of the most beautiful tram routes in Brussels. So if you have some time left and you no longer want to go to museums, resp. you don’t want to walk at all, take a ride on this tram. 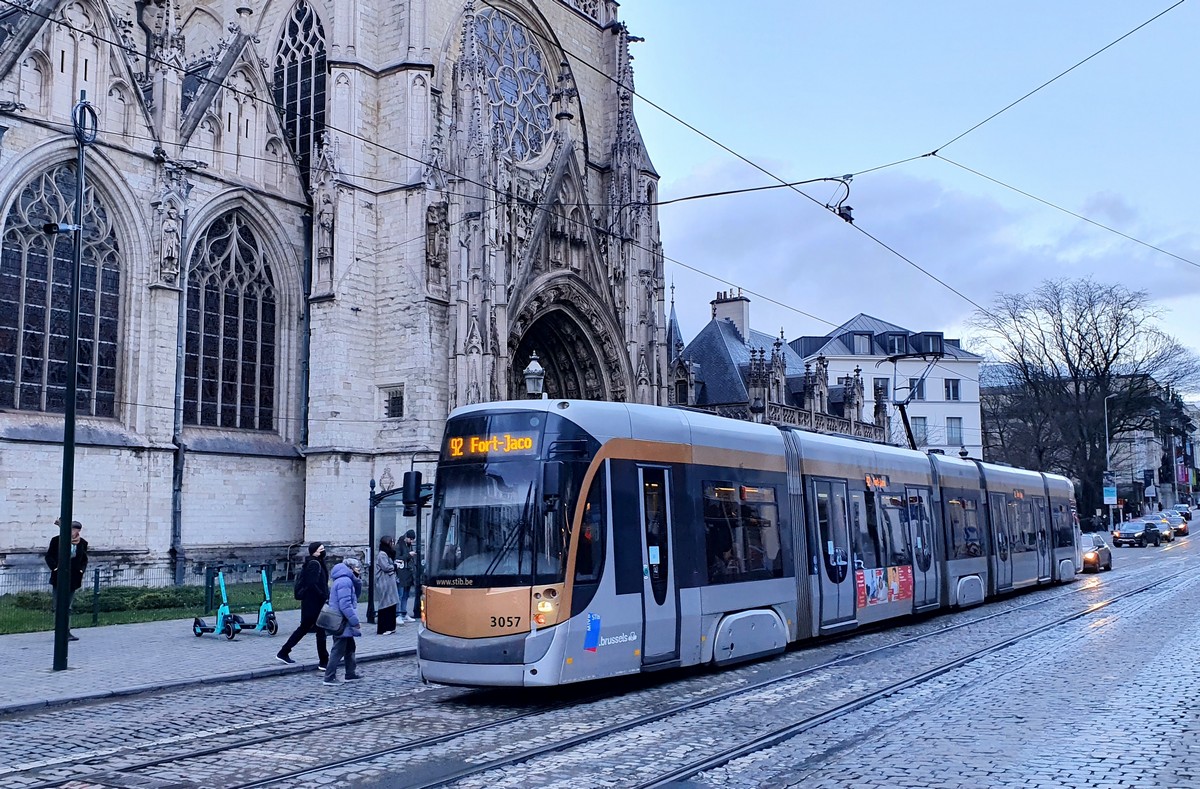 I stayed at a hotel near Petit Sablon Stop. The tram stops in front of the pilgrimage church of Notre-Dame du Sablon from the 15th century, which was built on the site of a small chapel of the archers’ guild. 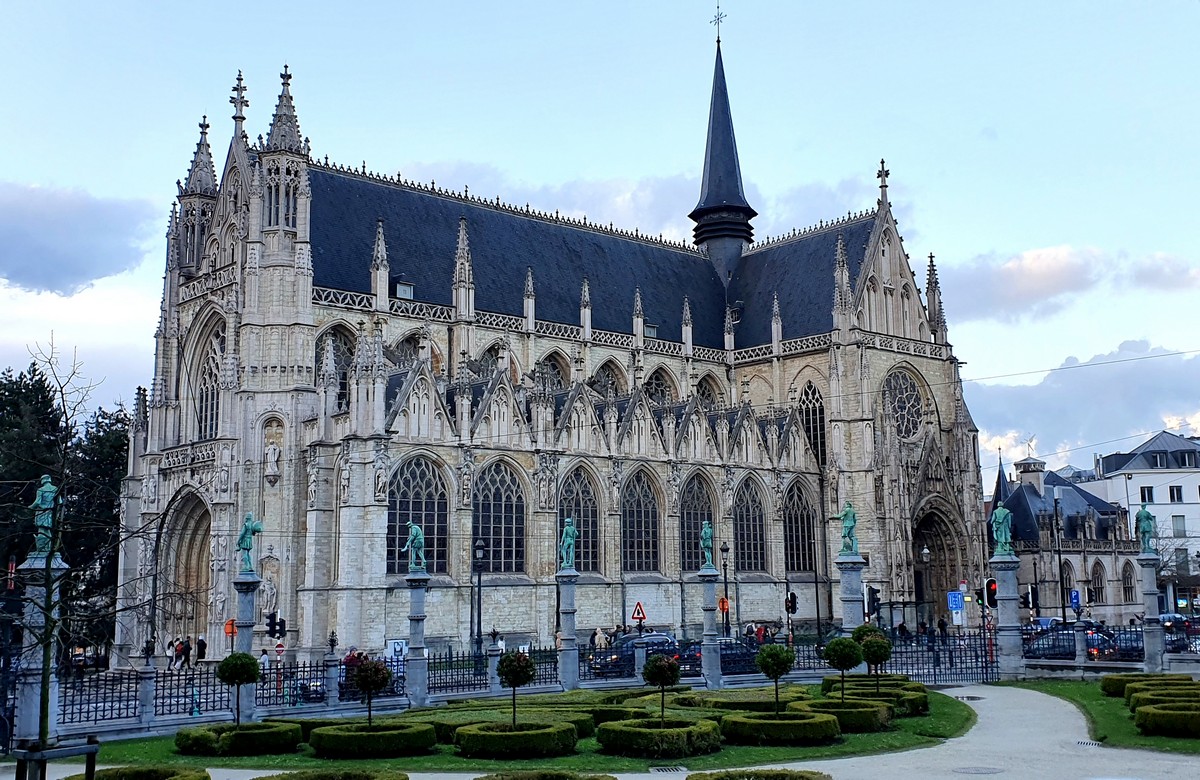 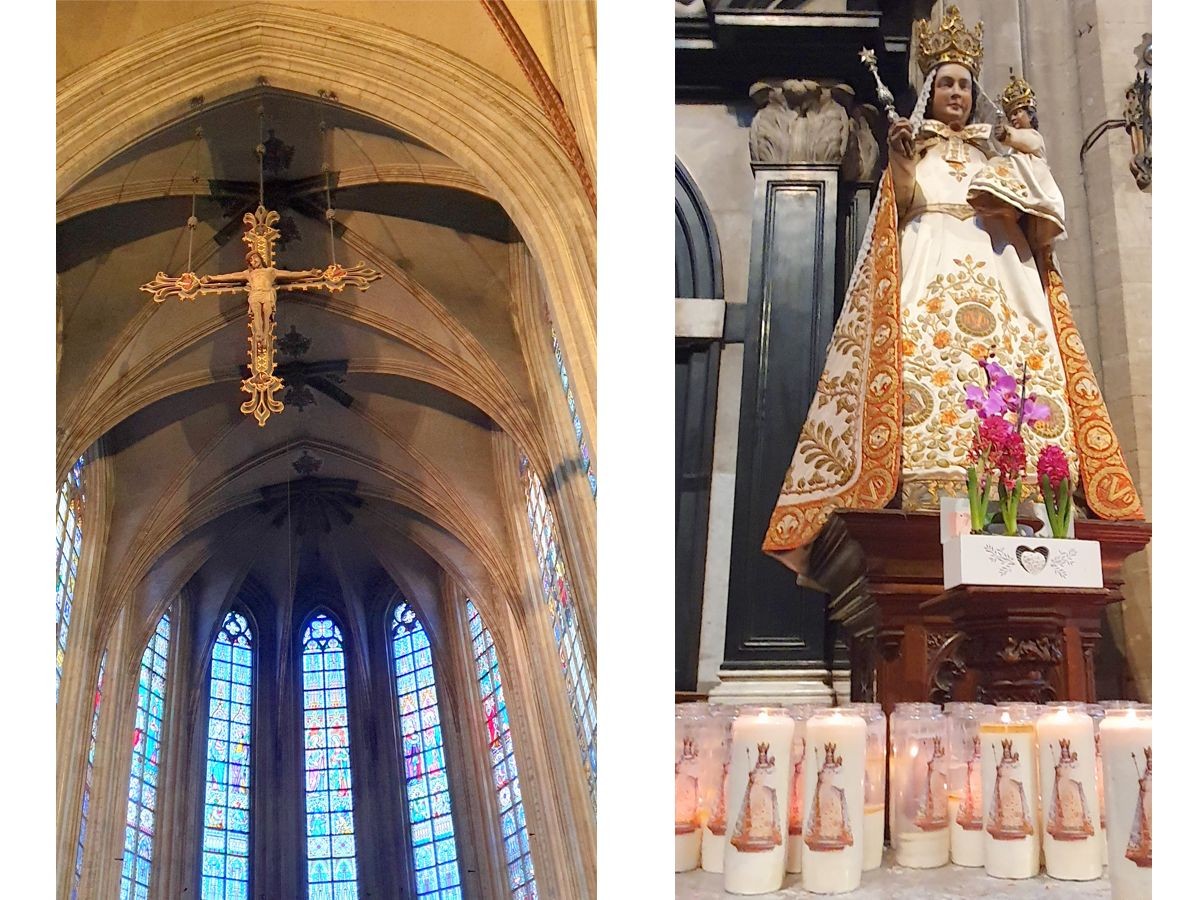 On the other side of the road, there is a small park, around which you can see a beautiful wrought iron balustrade with 48 bronze statues, representing various crafts, once very common in the city. In the back, there are ten statues of various famous scholars and humanists and in the middle of the park, you can see two more figures. 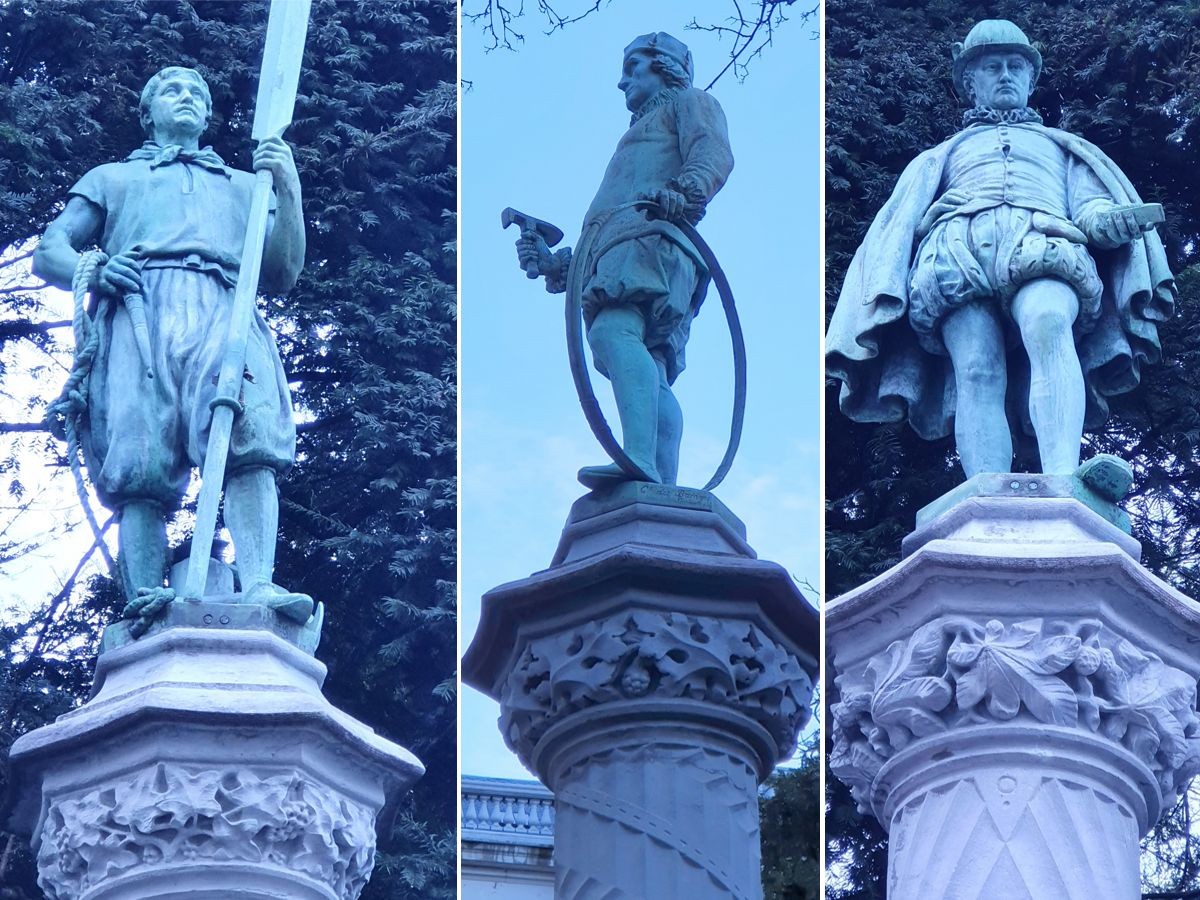 The Count of Egmont and the Count of Hornes were executed at Grand-Place. Their statues symbolize the struggle against Spanish tyranny in the 16th century. 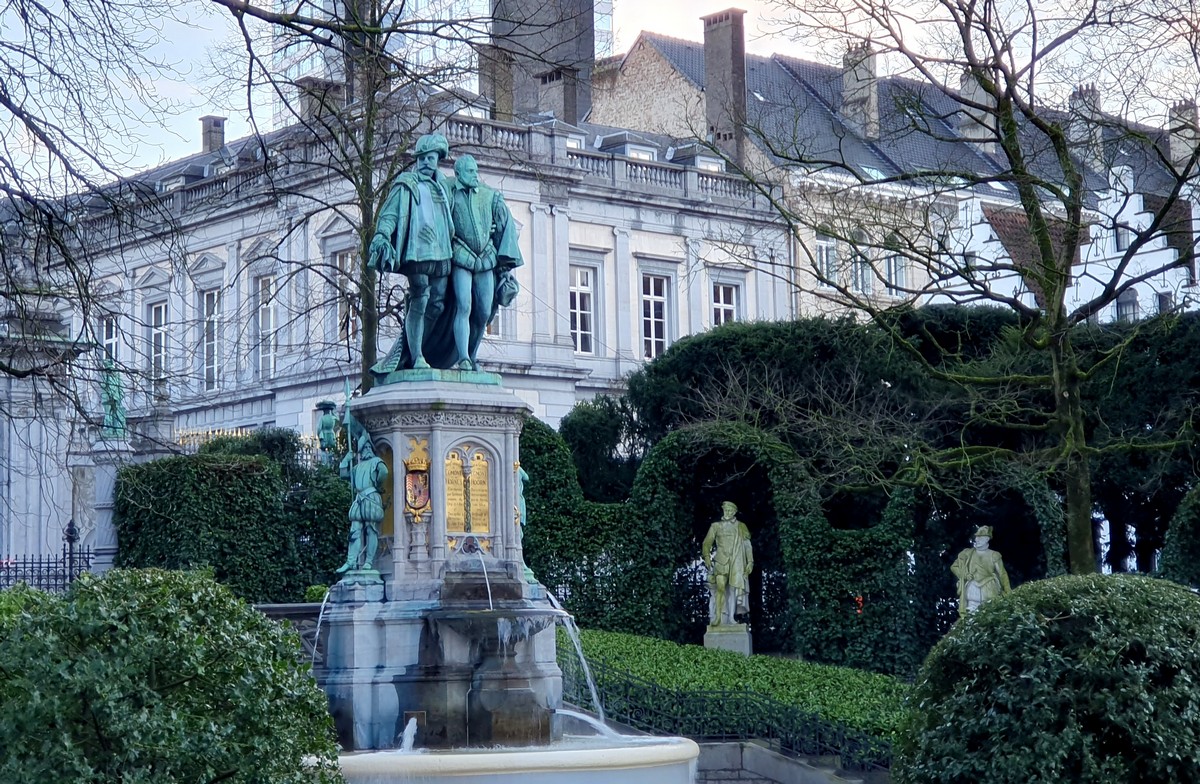 When I took the tram towards the city center, the following stops followed: Royale – buildings of the Royal Museums of Fine Arts, Palais – Royal Palace, Parc – Brussels Park (I wrote about all these attractions in previous articles) and I usually got off the tram at Botanical Garden.

If I got on the tram at the church in the opposite direction, on the left, we passed two interesting buildings – the Royal Music Conservatory in the French Neo-Renaissance style and the Great Synagogue (1878) – with the Star of David and the Tables of the Law in a niche at the very top of the façade. 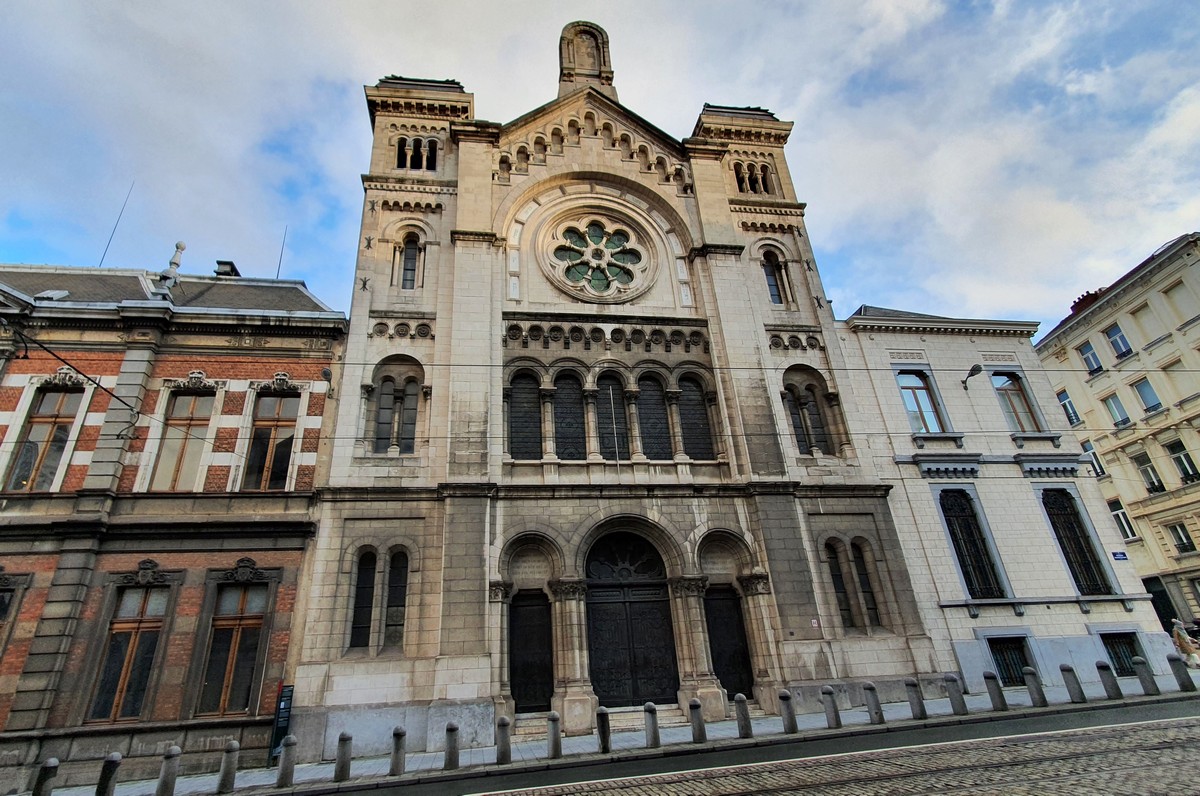 The next tram stop is Poelaert (the view and the Palace of Justice) and other interesting stops are Louise – the avenue with luxury boutiques, Faider – Art Nouveau buildings and Janson – Museum of Art Nouveau architect Victor Horta in his former house and studio (more about Art Nouveau in Brussels in a special article – soon).

How to get here: of course, the fastest way is by plane. However, I have opted for a more environmentally friendly night train from Vienna directly to Brussels. The train also has the advantage of arriving at the Midi Station in the city, which is also a subway stop (metro lines 2, 3, 4 and 6), so you can take the subway to where you need it from there. Train info: nightjet

Transport in the city: I took advantage of the special Brussels Card – I could use public transport unlimited and I also had free admission to several museums: Brussels Card

You can find transport connections in the city at: tripplanner

Where to stay: I stayed at the 4-star Hotel HN Collection Brussels Grand Sablon, Rue Bodenbroek 2 – an excellent central location!

Where to eat: right on the ground floor of the hotel, there is the Hispania Brasserie by Marcos Moran, a restaurant with many awards. Delicious seafood dishes! 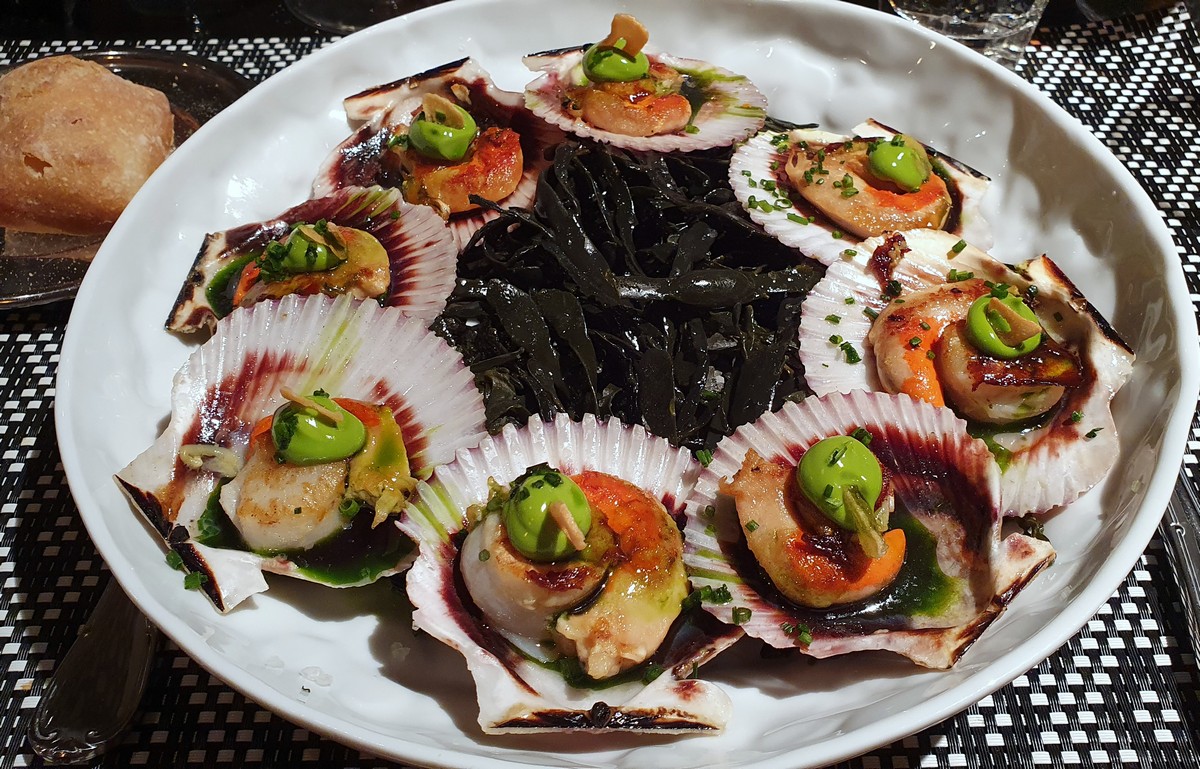 In addition to the restaurants in the previous articles, I would also recommend the (small but always full) Fernand Obb restaurant – all products are 100% made in Belgium. Above the entrance, there is the inscription: The sky is blue, the birds are singing and the parsley is fried. And really, that parsley was tasty and crunchy! And the combination of a shrimp croquette with traditional Brussels waffles was also interesting! 🙂 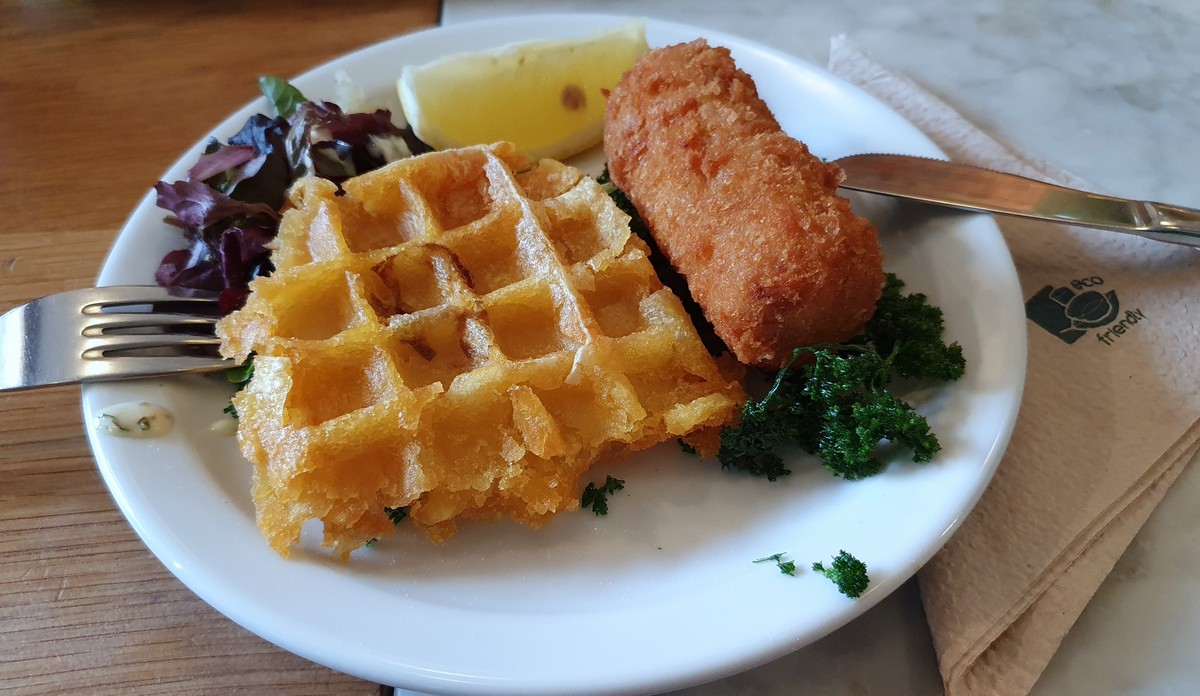 You may also read:

Brussels – The capital of comic strips

Brussels – 9 Art Nouveau Buildings that are Worth Seeing, Even if Only from the Outside 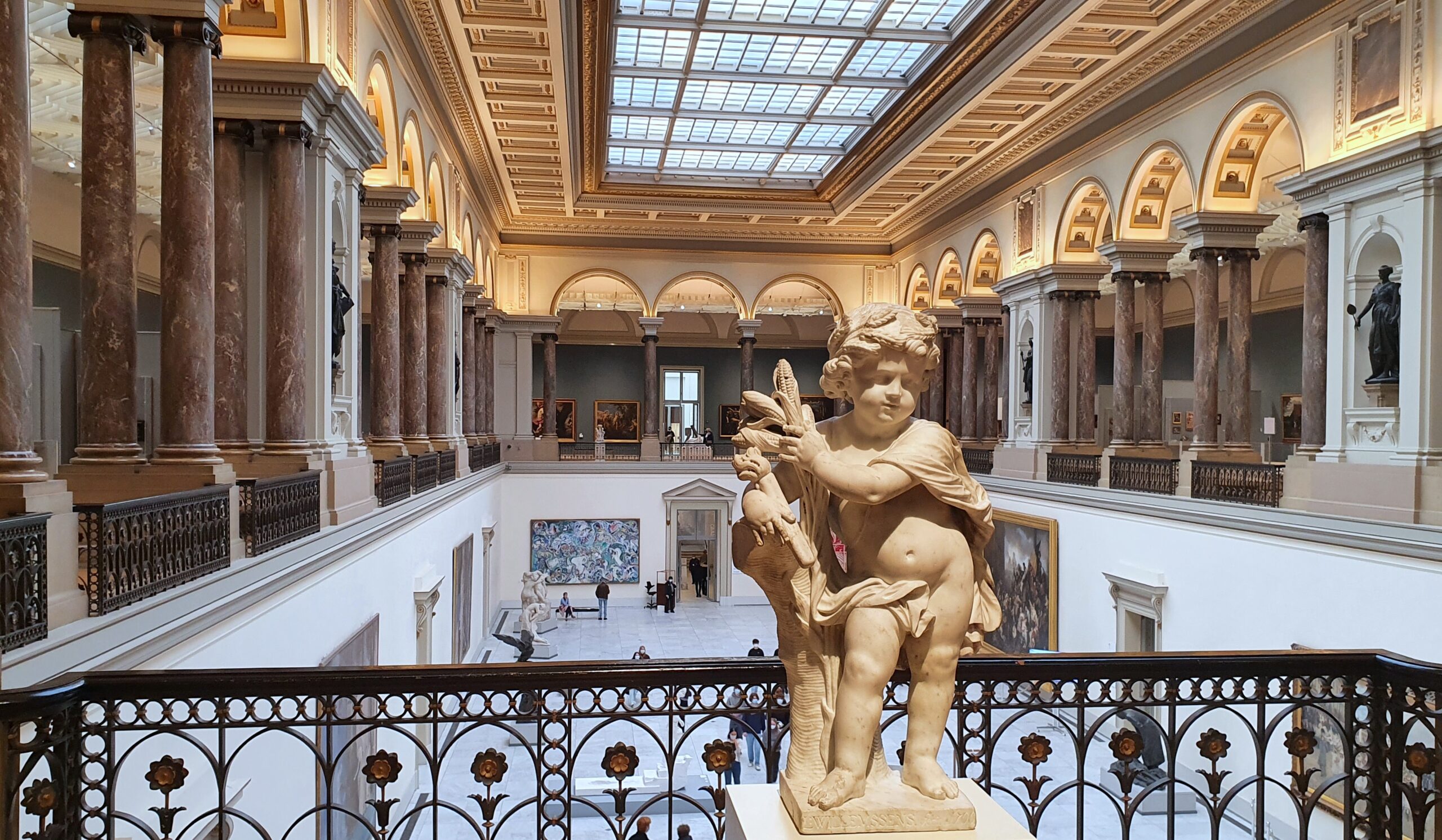 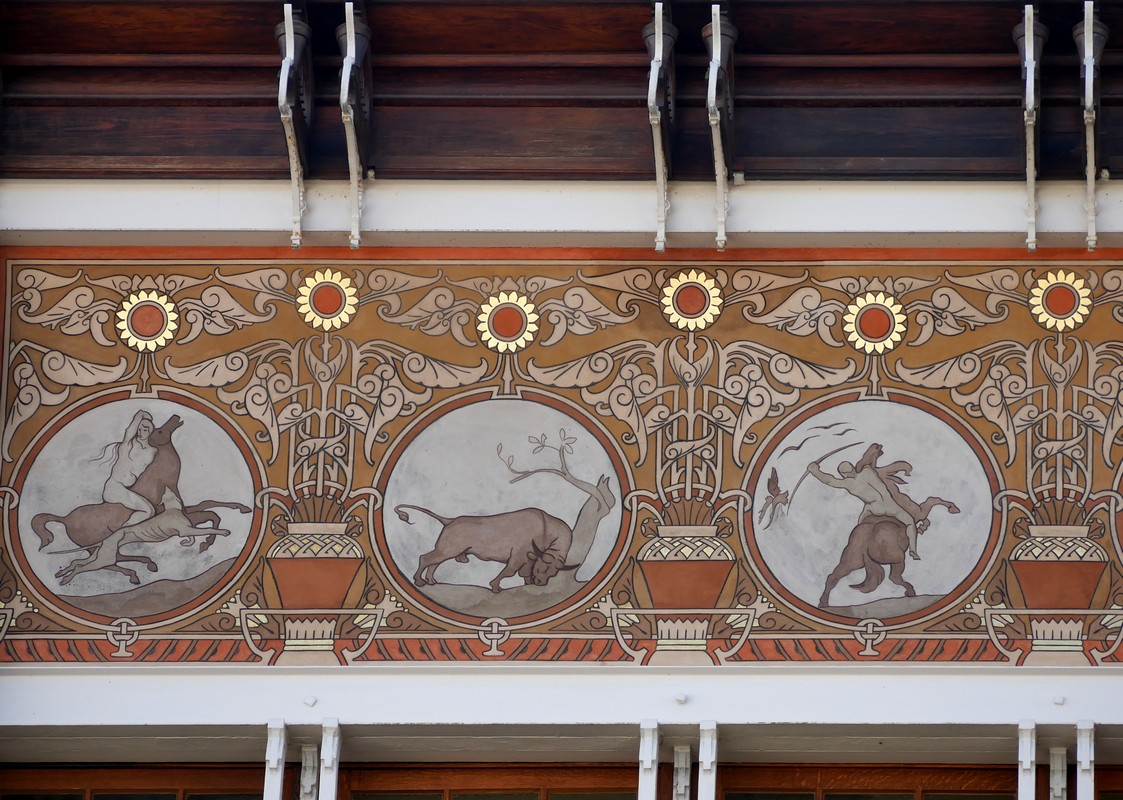 Brussels – 9 Art Nouveau Buildings that are Worth Seeing, Even if Only from the Outside

Brussels - 9 Art Nouveau Buildings that are Worth Seeing, Even if Only from the Outside