Have you ever been to Vienna? If so, then you must have visited or at least walked around St. Stephen’s Cathedral. Its tall pointed tower can be seen from many places in the city. However, not everyone knows that the towers were originally supposed to be two. The Viennese tell legends about why the north tower remained unfinished. However, after my recent trip to the Cistercian abbey of Rein in Styria, I no longer need a story about a young builder in love, because I already know that the other tower is located in the pilgrimage church of Maria Strassengel! 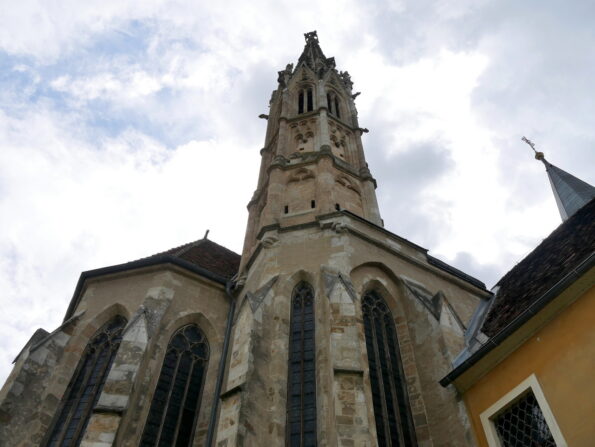 If you would like to make a trip to these parts of Austria, then you should first visit Rein – the oldest still-functioning Cistercian monastery in the world. For more information, see my article: Rein

To this abbey belongs the Maria Strassengel Church, located just a few minutes away by car, in the direction to the village of Gratwein-Strassengel. 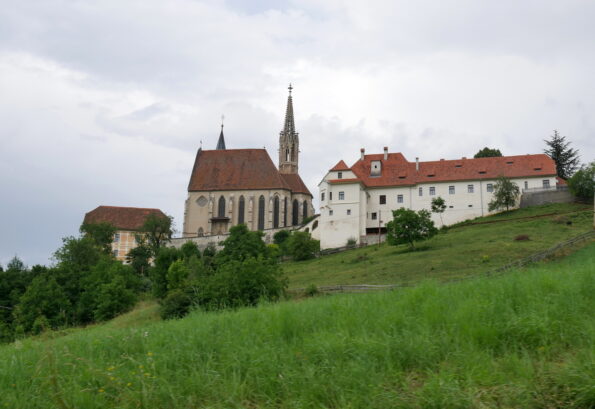 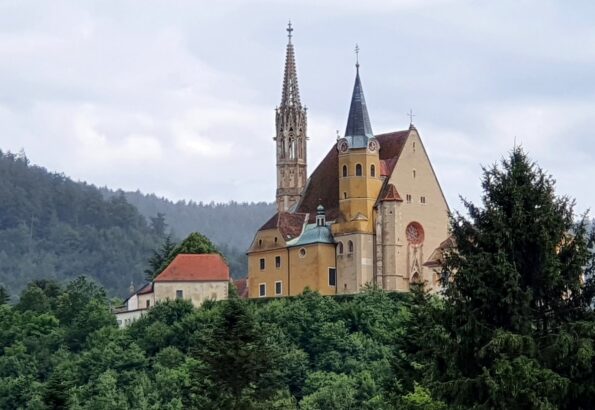 Although I have already visited several pilgrimage sites and churches, Maria Strassengel really amazed me. The massive building sits on a hill, each part of it is different, so when you go around it from different sides and your angle of view changes, so does the shape of the church – at one point you can see all the towers and turrets of the building and you have the impression that the high tower somehow doesn’t fit there, as if someone had pasted it there. Then the church looks as if a part has been cut off from it, the second big tower is hidden behind the roof, but from another perspective, the church appears in front of you in all its Gothic beauty, the tall tower rises to the sky like a sharply cut pencil and you can see that it really belongs to this building (which means it was not transferred here from Vienna’s Cathedral :)). 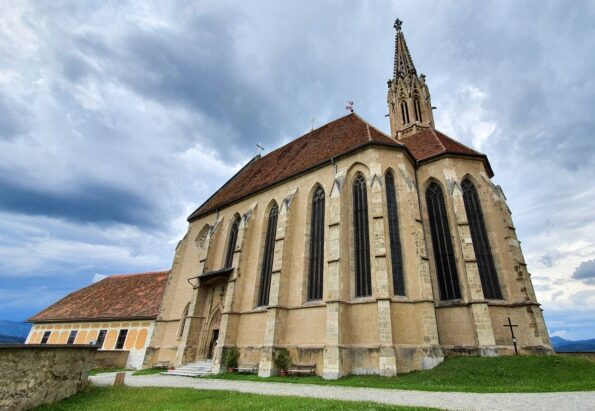 Originally, there used to be a chapel on this hill, which had probably been built by the monastery of Rein in the 12th century. In 1346, Abbot Hartwig laid the foundation stone for the construction of today’s church, which is one of the most important sacral buildings of High Gothic in Austria. 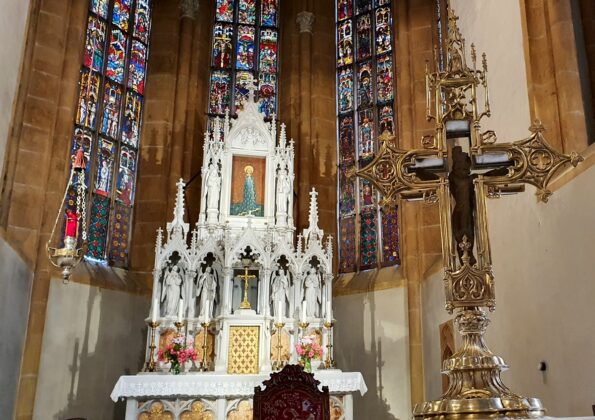 Our guide Abbot Fr. Philipp Helm explained to us that the resemblance to the tower of St. Stephen’s Cathedral is not accidental, because this one was also built by the same builders who – according to the preserved documentation – came here directly from Vienna. It was completed in 1366. Also on this tower, you will find gargoyles, stone heads, pointed arches and crockets, pinnacles and other Gothic ornaments, but the tower is smaller and finer, so everyone calls it “Little Steffl” (as the Viennese call their cathedral Steffl ). 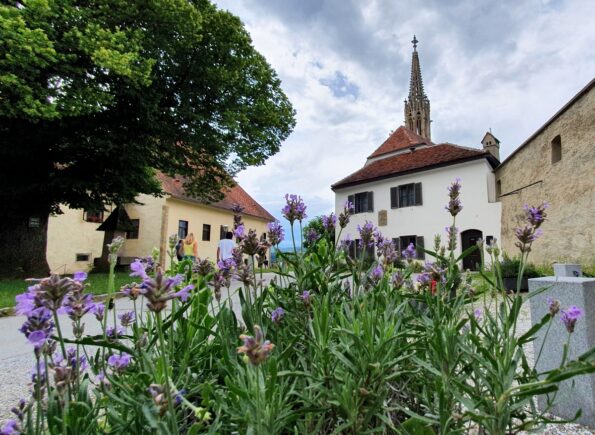 Believers come to pilgrimage sites to pray together, make their invocations or thanks for hearing them. You can also recognize this in the votive paintings in the chapel, it is immediately clear who was praying for what here (a child in a cradle, an ill man in bed…). 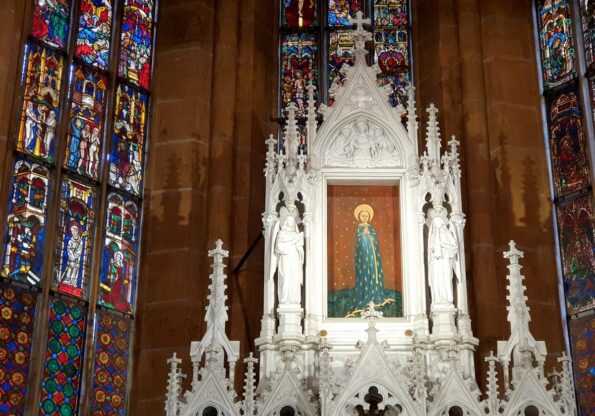 An important object that has attracted pilgrims to this church since the 12th century is the picture of St. Mary on the main altar, brought from the Holy Land by Margrave Ottokar III, son of Leopold the Strong of Steyr, the founder of the monastery in Rein – today unfortunately only a copy, because the original was stolen in 1976. Mary is pregnant, in a typical Gothic blue dress decorated with small ears of corn.

This event – the donation of the picture to the monks – is also immortalized on a painting in the side chapel. Since then, the cult of Mary has been worshipped here, the monogram with her name can be found in several places in the area. 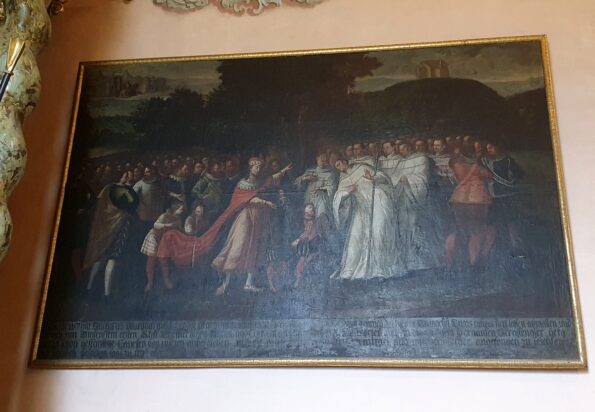 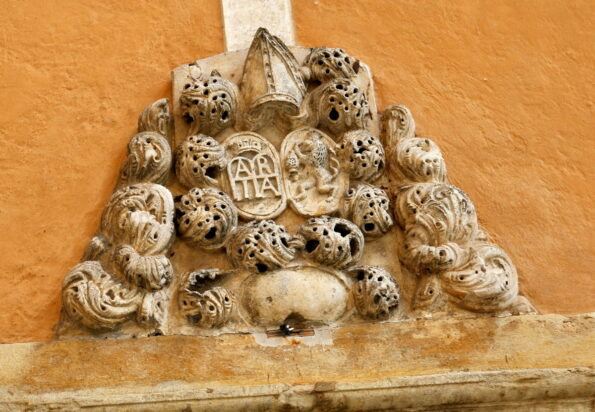 The stained glass windows behind the main altar are partly original from the 14th and 15th centuries – those ones with dark red glass.

The second object for which pilgrims came and still are coming here is a strange root that looks like the crucified Christ. It is said to have been found by a shepherd after noticing that his cows and donkeys seemed to be kneeling in front of something under a fir tree. 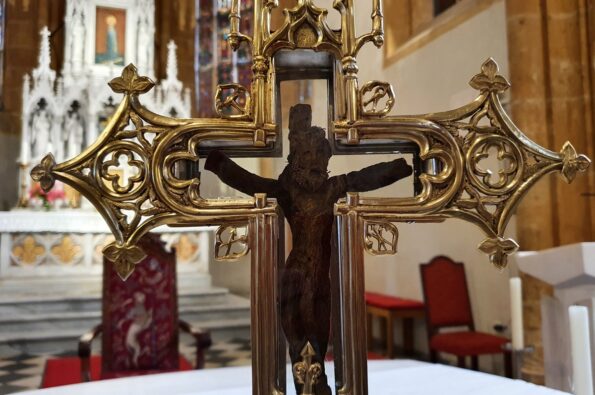 I especially liked the reliefs above the entrance doors to the church, made of sandstone. In a relief above the west entrance, the archangel Gabriel speaks to Mary, telling her that the word will become a body, as evidenced by the child flying to Mary from heaven. 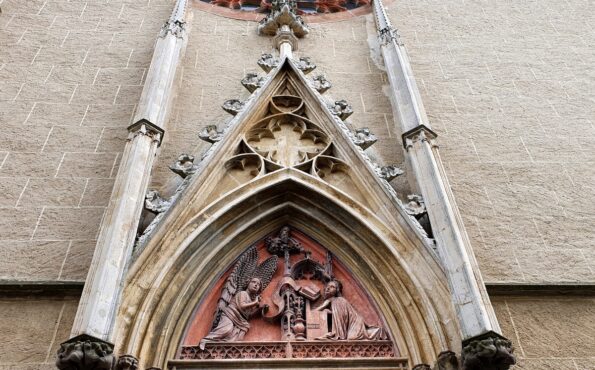 The relief above the southern (currently in use) entrance brings closer the scene after Christ is taken down from the cross which is symbolized by the tree of life. Mary cries over her dead son, there are also other women and John, one of Jesus’ closest disciples. 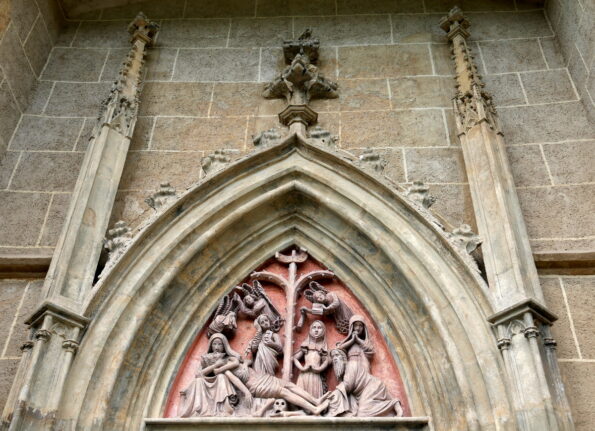 There is also a tavern and a house for monks in the area. And since even these holy men could not live only on the spiritual word there is also a kitchen. But what a kitchen! The medieval kitchen was last used for smoking meat. Although the kitchen has a high chimney, its walls are covered with thick black, shiny and I assume also sticky layers of soot and smoke. It was as if someone had poured black tar on the walls. Brrr… I promised to myself that I would switch on the fume hood more often in our kitchen! 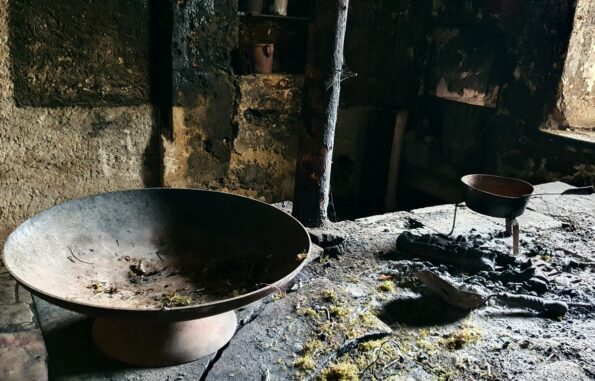 It is better to quickly go back outside to enjoy the view of the surrounding countryside. In the courtyard, we also discovered a fig tree with small green fruits, which I would not expect at all in this part of Austria, and a big old linden tree – a natural monument. 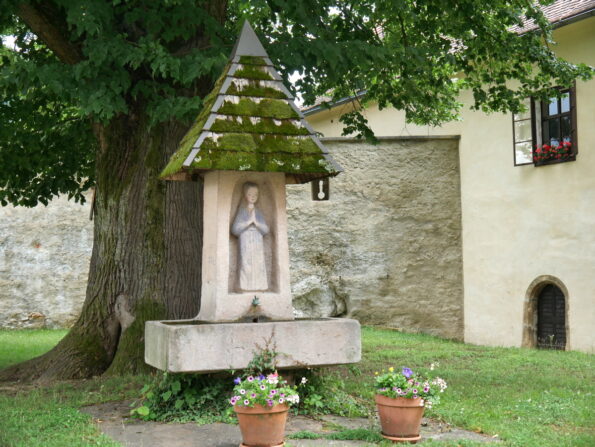 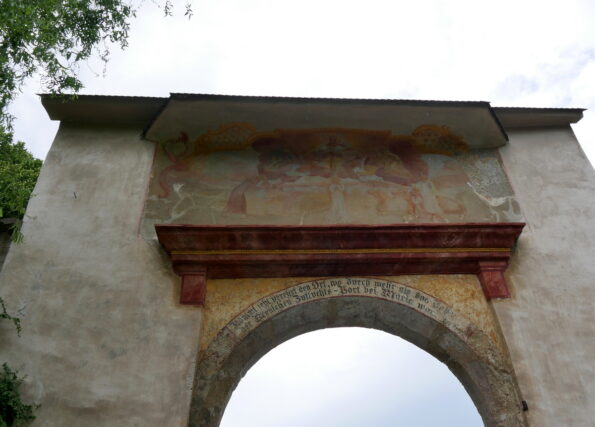 We left the complex through a brick gate which was restored in 1757. It has once been richly painted but the wind and the rain have washed away a lot of the paint. However, you can still recognize the figure of the Madonna at the legendary fir tree, the root-cross, the figures of the Holy Spirit and the Father and on the clouds, there are St. Benedict and St. Bernard of Clairvaux, who contributed to the founding and expansion of the Cistercian order. And there are also cows, thanks to which the rare relic was found. Only now did we realize that we had seen the same animals on arrival at this pilgrimage site, grazing peacefully on the hillside near the majestic church. 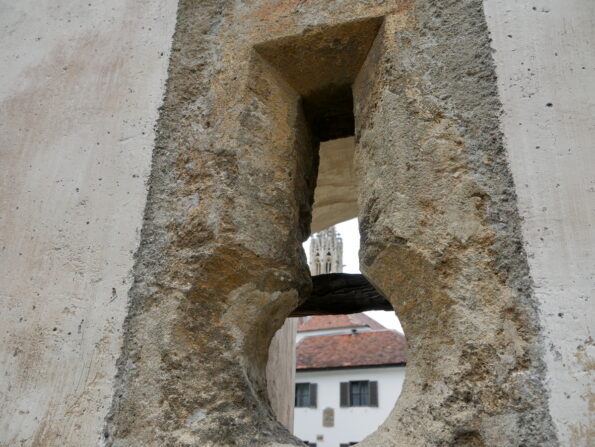 A visit to the Abbey of Rein (30 km from Graz) and the pilgrimage church Maria Strassengel is an excellent tip for a day trip not only for devoted pilgrims but also for those who are interested in history, culture and nature as well. 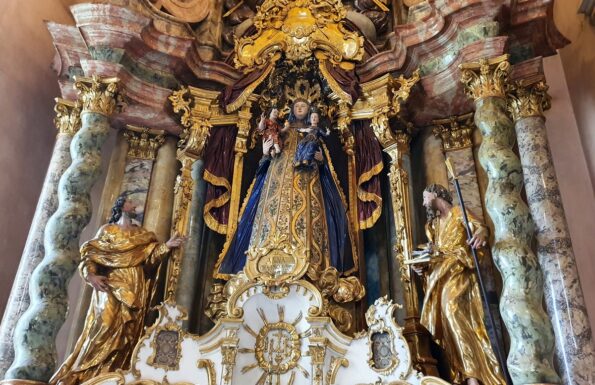 Other tips for similar trips: Admont Abbey with the largest monastery library in the world

Thanks to Klösterreich for organizing my visit to this pilgrimage site. 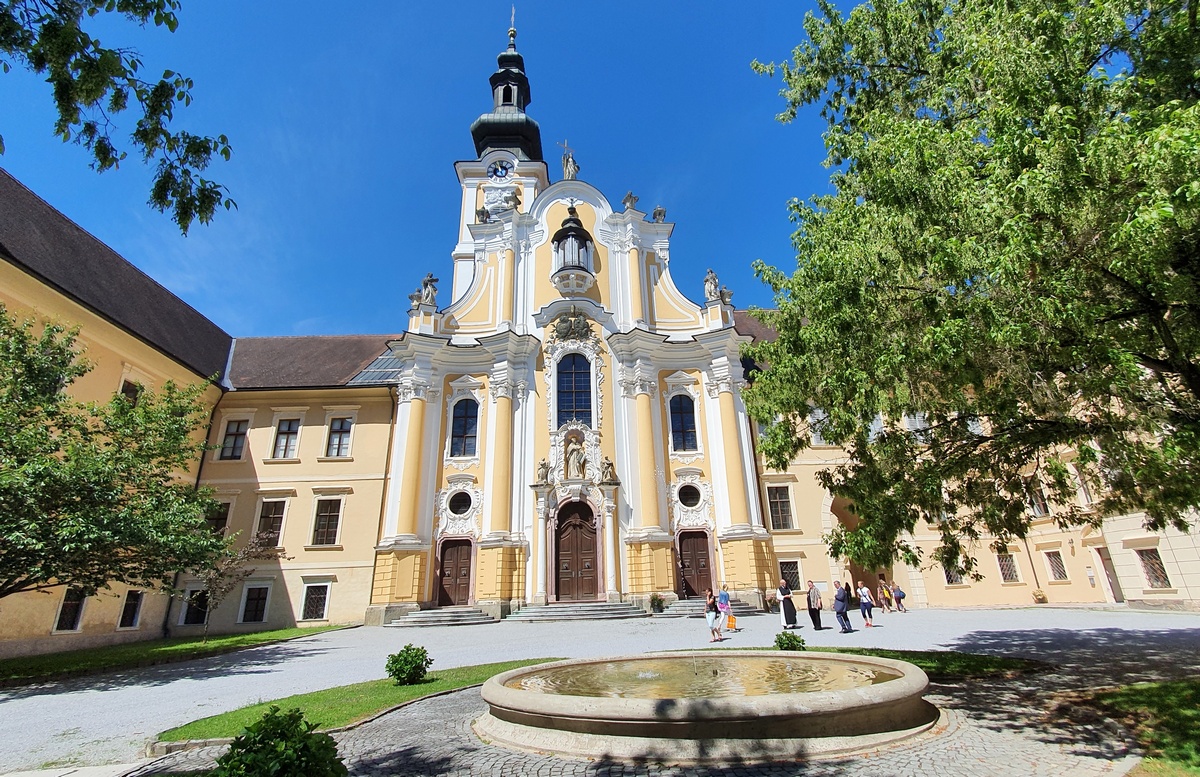 Rein – At the Oldest Cistercian Monastery in the World 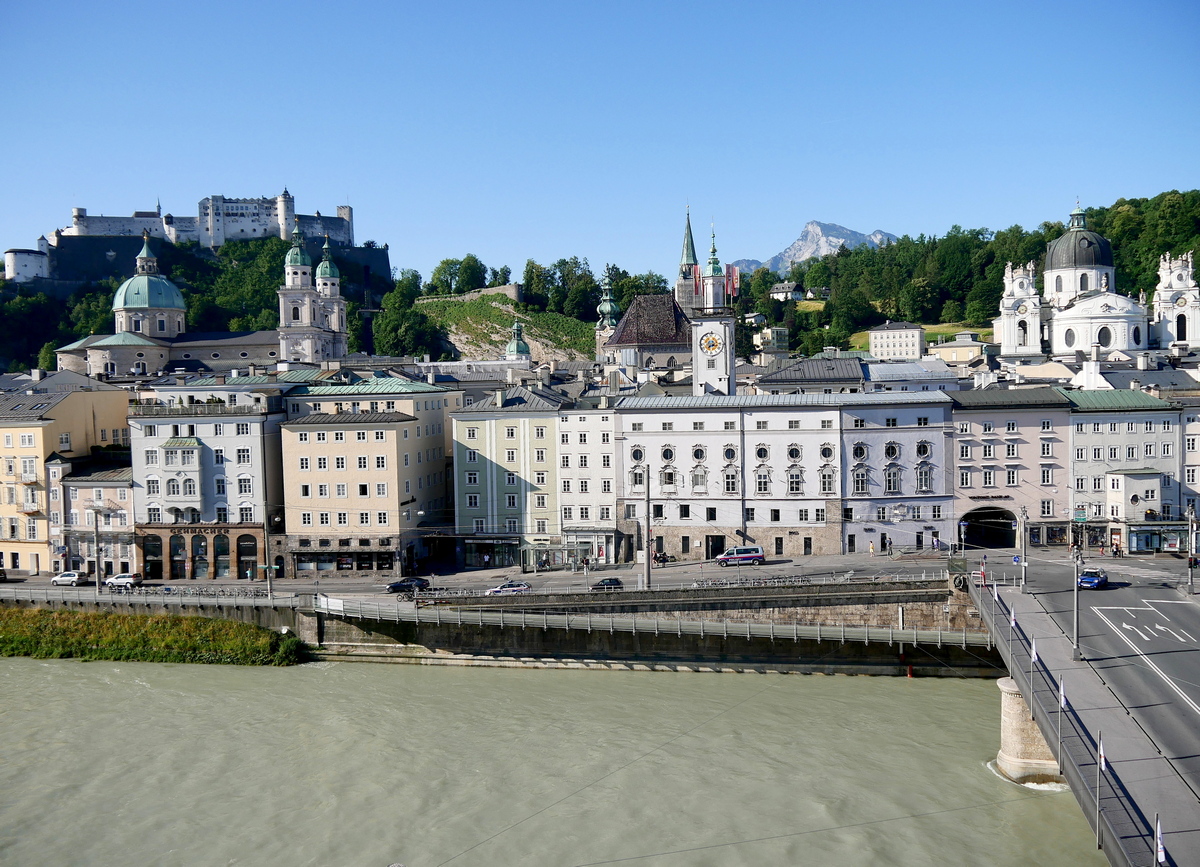