Skjálfandi bay with the small town of Húsavík belongs to the most picturesque places on Iceland. 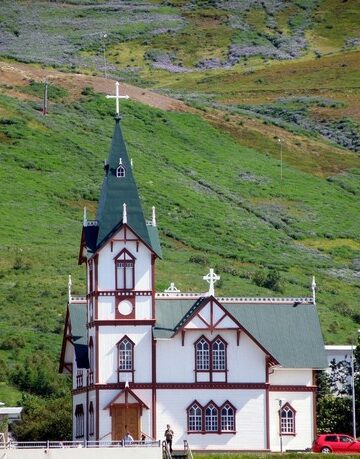 The slim tower of the wooden church Húsavíkurkirkja in Art Nouveau style dominates above small houses. The walls of those houses are covered with colourfully painted corrugated iron. On the altar picture in the church is the scene about the resurrection of Lazarus. The story is set in scenery with lava fields… 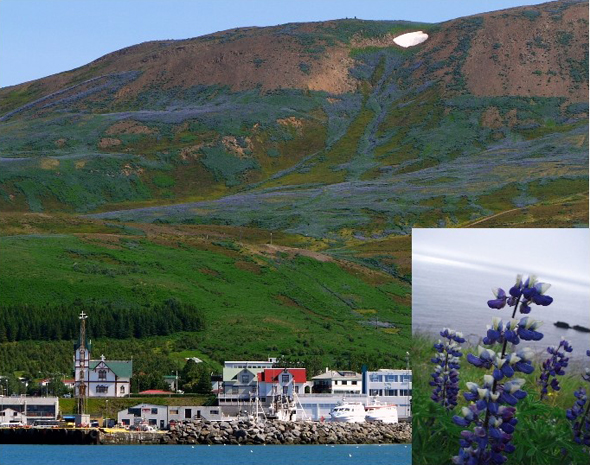 A “blue” hill is rising above the town, there are large patches covered with blue flowers of the lupine which is the most common plant in Iceland. 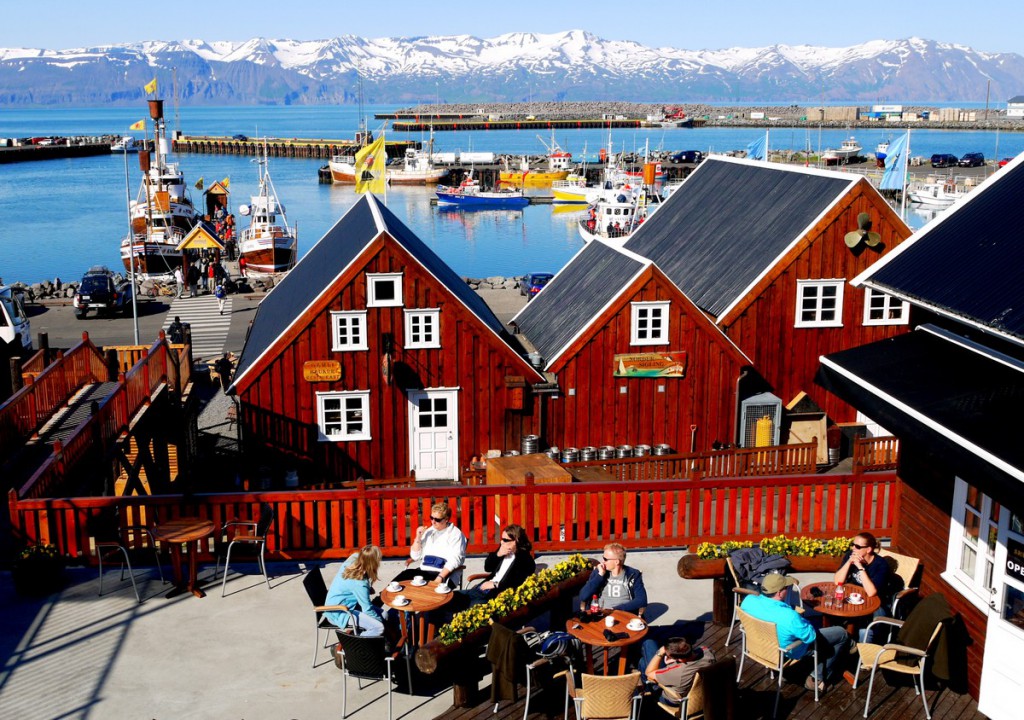 In the summer months, you can sit on the restaurant terrace in the port, even with short sleeves, enjoying the view of the bay with snowy mountains and tasting some of the culinary fish specialties. 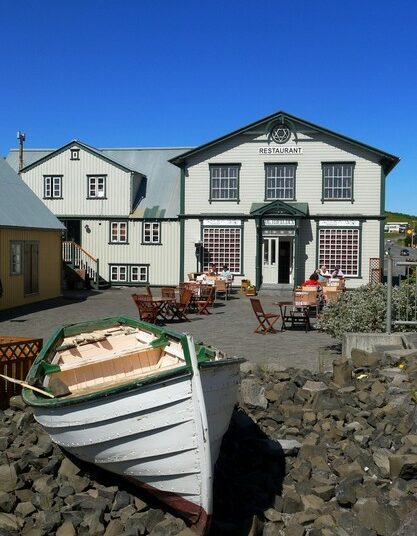 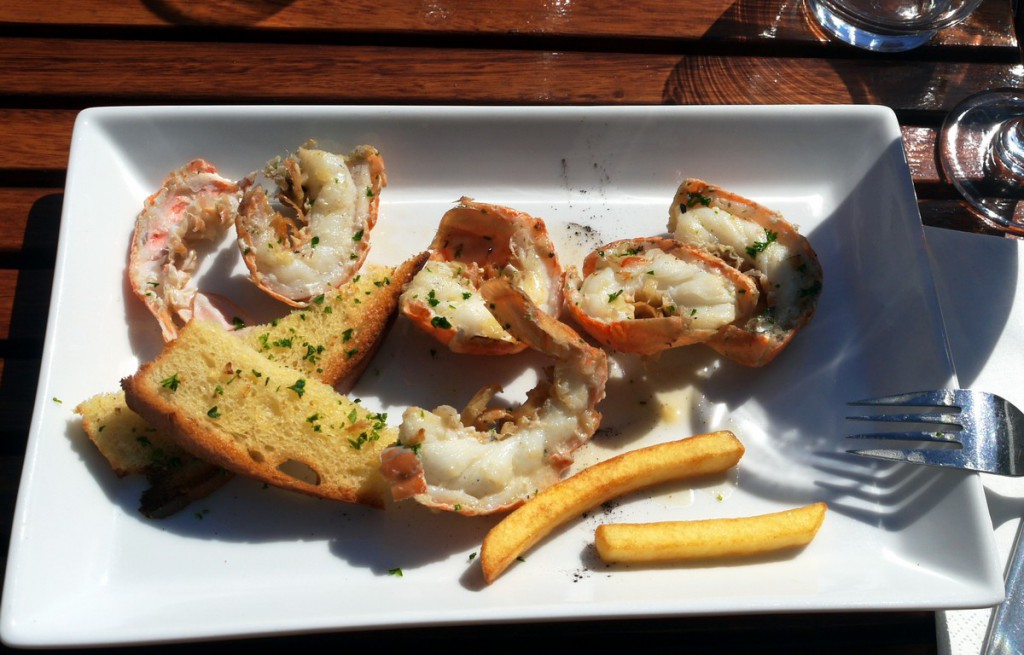 However, the main attraction of Húsavík is whale watching. We came here for the same reason. Boats made from oak wood were already waiting in the port. We took the ship named Náttfari which means literally “nightwalker”. Náttfari was a slave who escaped his master – the Swedish Viking Gardar Svavarsson who was the first to stay over winter in Húsavík around 870 A.D. 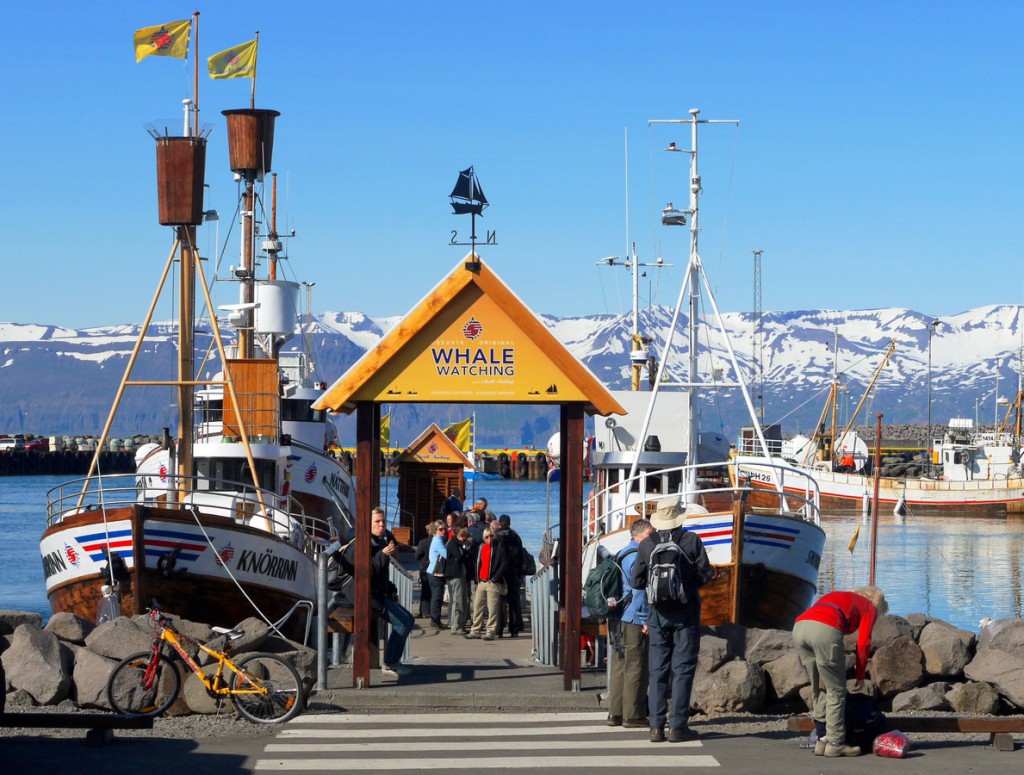 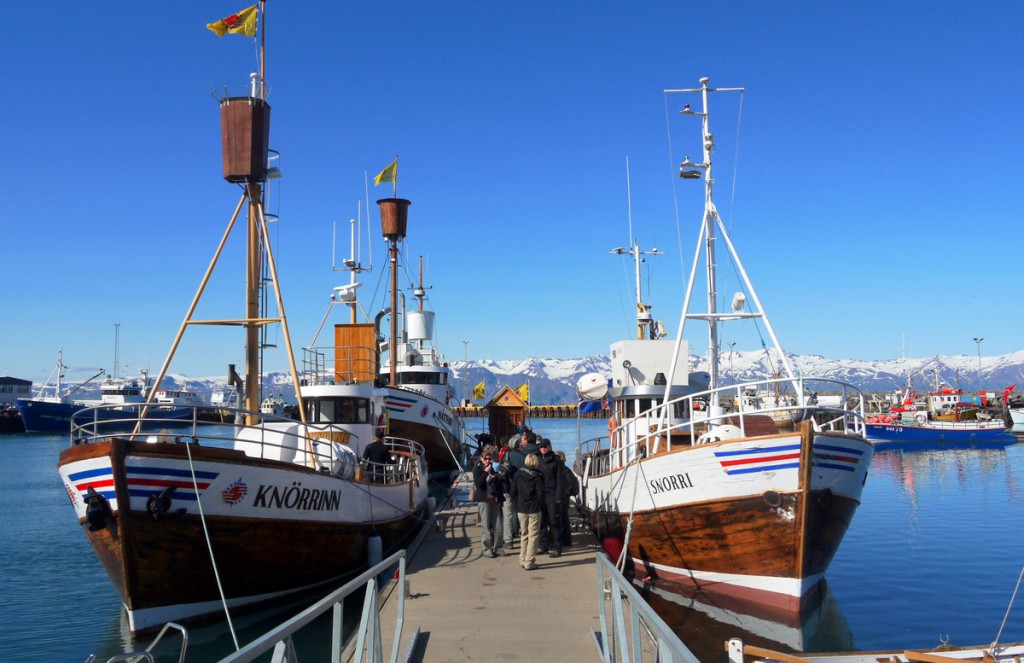 Although the sun was shining we had to dress warmly, including a warm cap and gloves. A raincoat was also necessary, it protected us from the freezing wind on the open ocean. 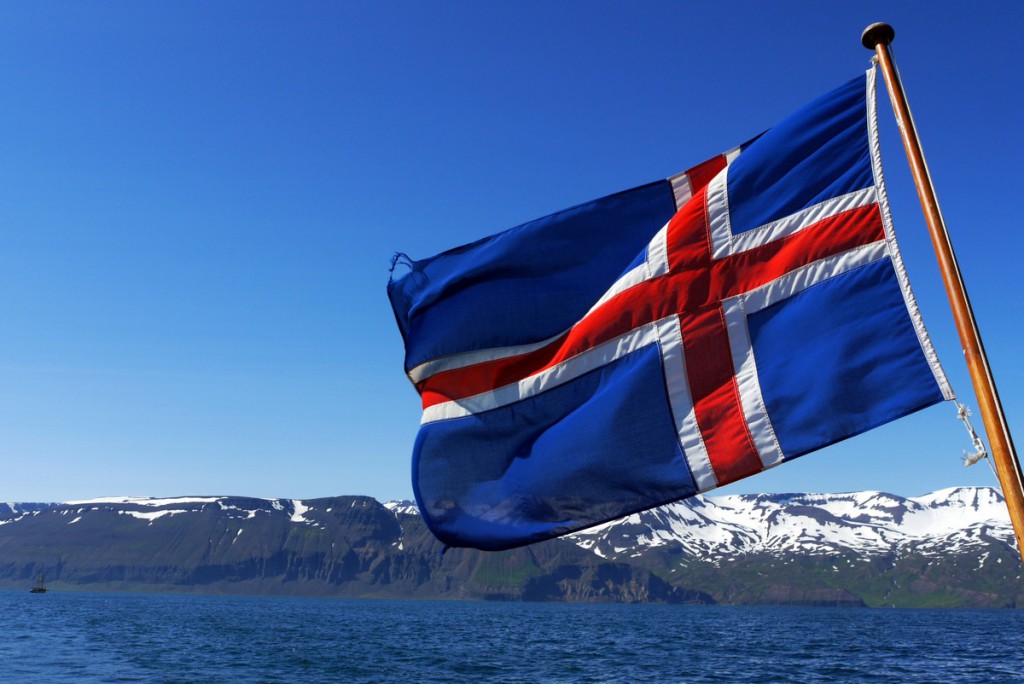 First, the chief observer explained to us the sailor’s clock method of signalization. If he cried out: “Nine o’clock!“, we all moved to the left side of our ship and started fanatically taking pictures.
Whales, despite their high tonnage sizes, surprised me with their smooth movements. They majestic surged several times above the surface, then at the last surge, which was a little bit bigger, they took a deep breath and sank into the ocean depth for several minutes. But just before they did, they proudly showed us their elegant flukes. We remained standing in our position with our fingers stuck on the trigger. But whales have their own hide-and-seek rules. They arose somewhere totally else than what we expected. Delighted in how they had tricked us, the whales blew out their characteristic fountain.

In Húsavík, there is a probability of 95% to see those biggest mammals live. Mostly you can watch the humpback and minke whales. 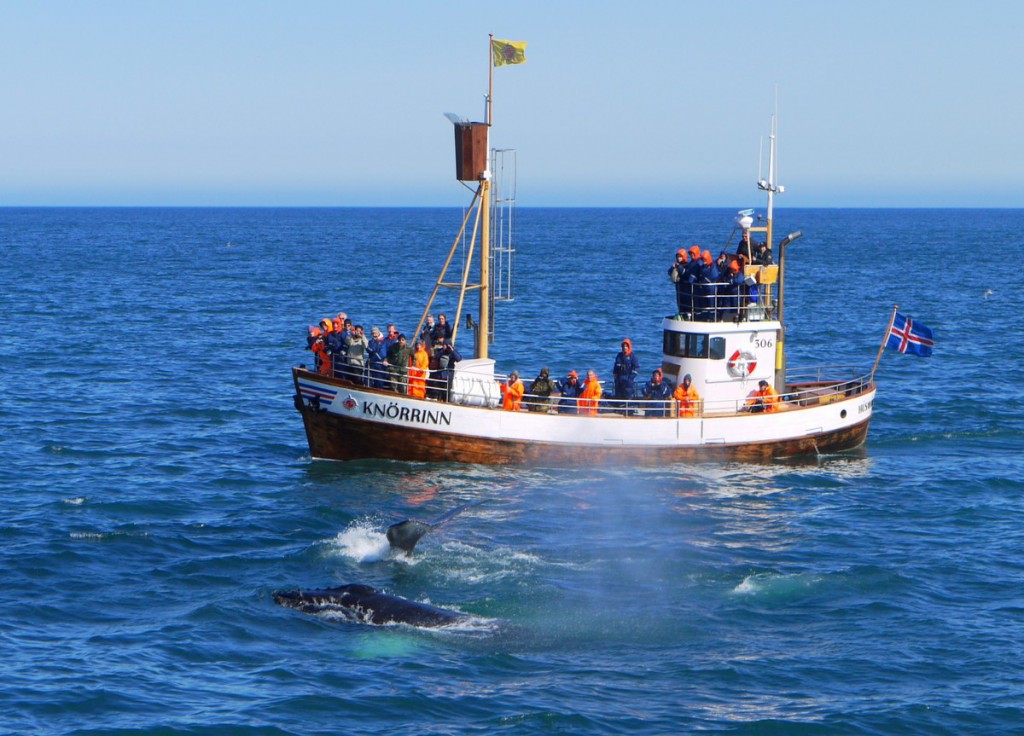 We also found some interesting information in the Whale Museum, including the sad story about Keiko – the most famous orca, born near Iceland, who portrayed Willy in the American movie “Free Willy!”

Húsavík is also the right place for those who are looking for something special and piquant. They can visit the Icelandic Phallological Museum, probably the only museum in the world with a collection of phallic specimens (more than 200!) belonging to all the various types of mammals found in this country. 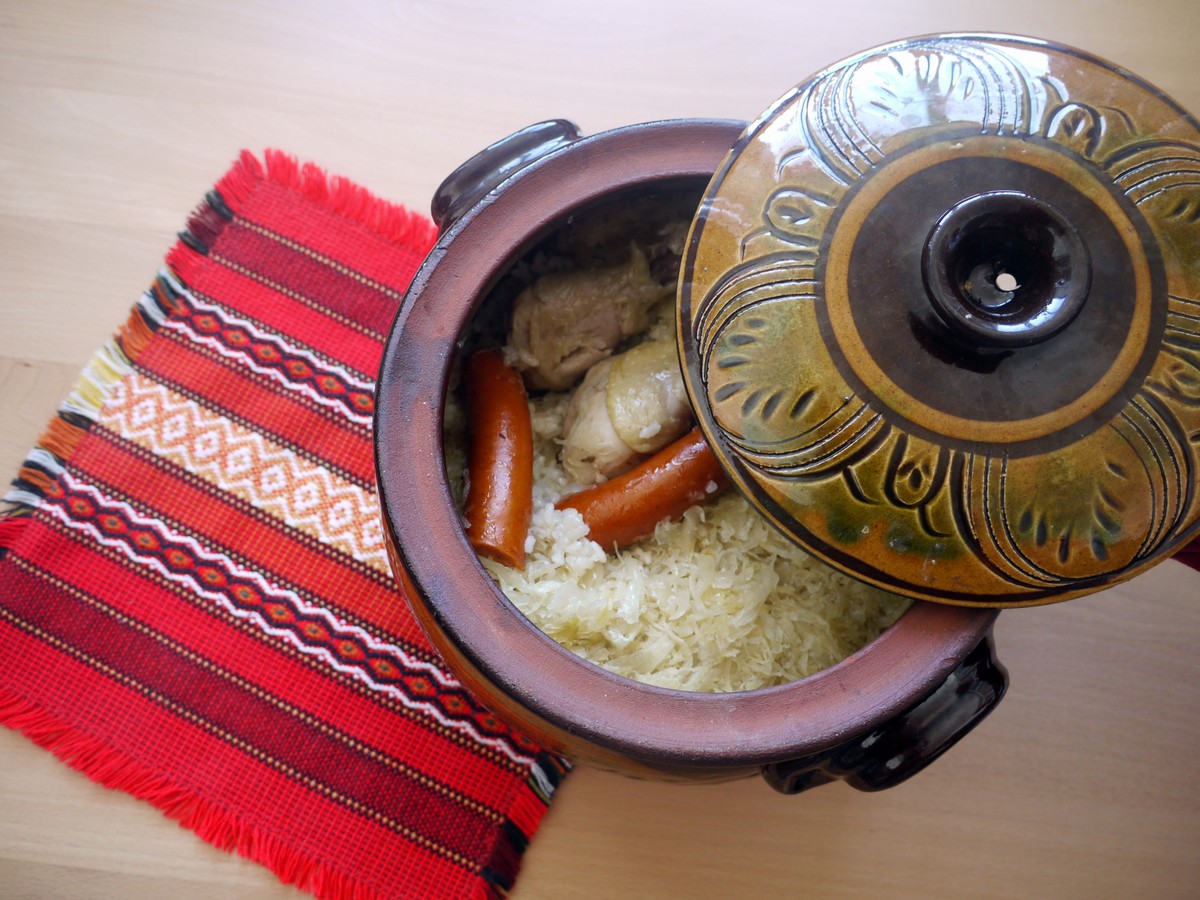 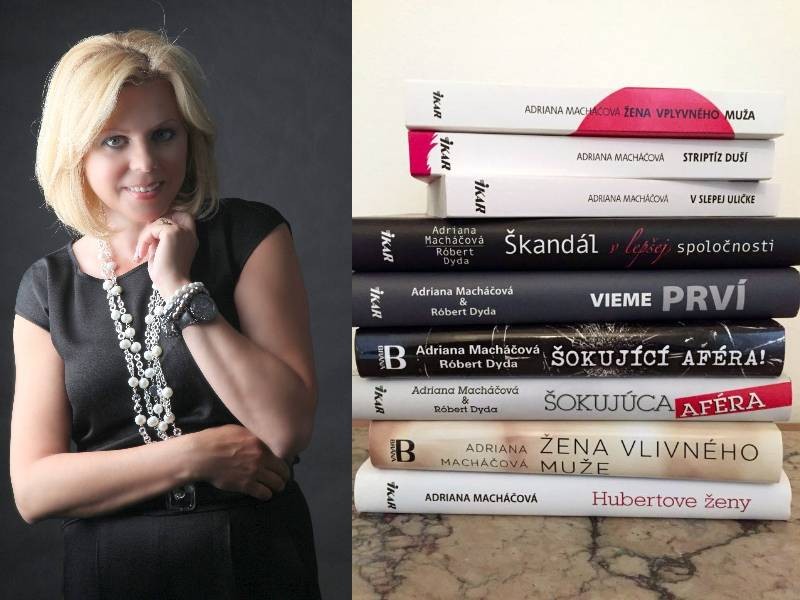