Nikolaihof is located near the historic town of Mautern in Lower Austria. I must admit that the reason for my visit to this family winery was not wine, but a cookbook. Though not any book! Did you know that cookbooks also receive the “Oscars”? The Gourmand World Cookbook Awards are presented in various categories. Since 1971, Nikolaihof has been led by Christine Saahs. She is the author of two books that have won this award. First, it was the cookbook of the region – Wachau Cookbook in 2016 and, four years later, the book Cooking with the Power of Nature in the category Nature as Medicine. 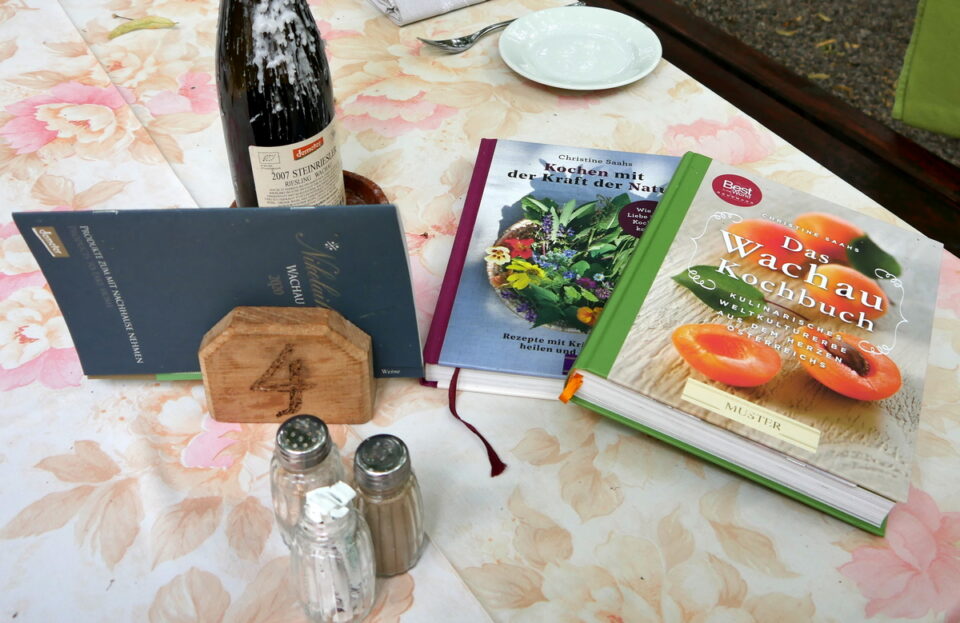 Both books will delight not only lovers of culinary art with interesting recipes but – especially the second book will impress everyone with its positive energy while just flipping through the book. It is similar with the Saahs family estate. As soon as you enter the inner courtyard, you will be enchanted by the pleasant atmosphere, amplified by the old linden tree, its huge branches shelter from the heat and light summer rain. 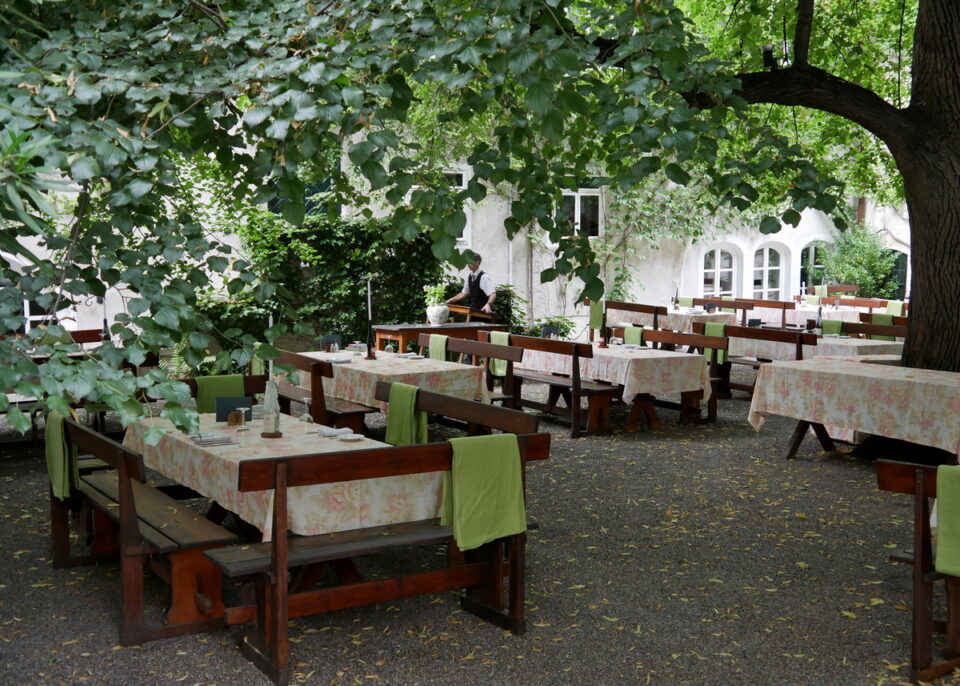 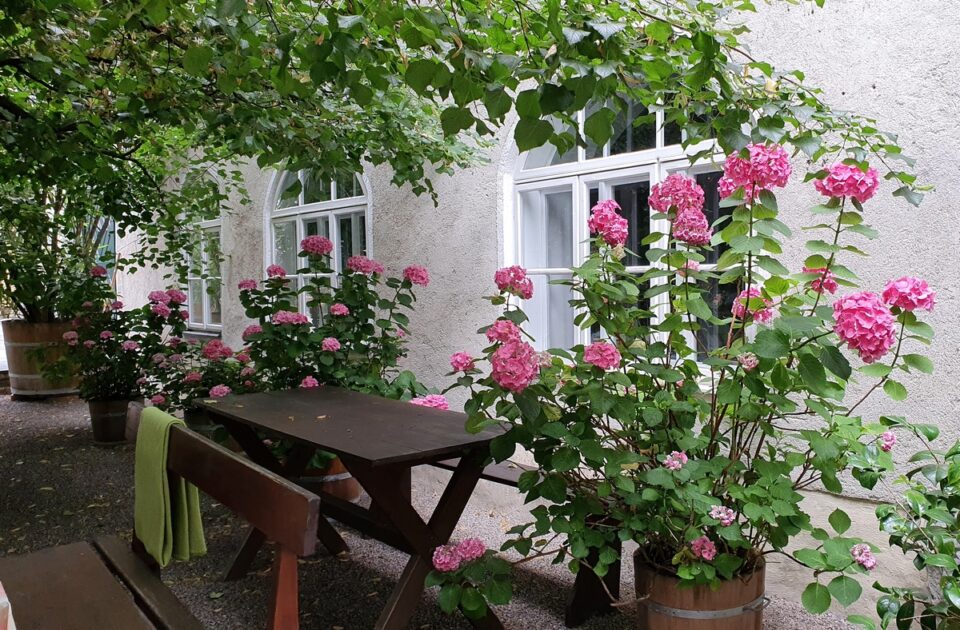 Every detail is carefully thought out – flowers in old pots and vases and other natural decorations, blankets for guests for colder summer evenings…

Both the Celts and the Romans, who built the fortress of Favianis as part of their defence system here, had already known that the place was characterized by strong energy. The remains of the ancient fortifications can still be found today. In the year 470, St. Severinus retreated here to his prayers. When describing his life story, even the local vineyards are mentioned already. In 777, Nikolaihof was handed over as a gift to the abbey of Kremsmünster, later transferred to the administration of the monastery of St. Nicholas of Passau. Even today, the area is dominated by the tower of the chapel of St. Agapitus, built on the site of a former Roman early Christian basilica. 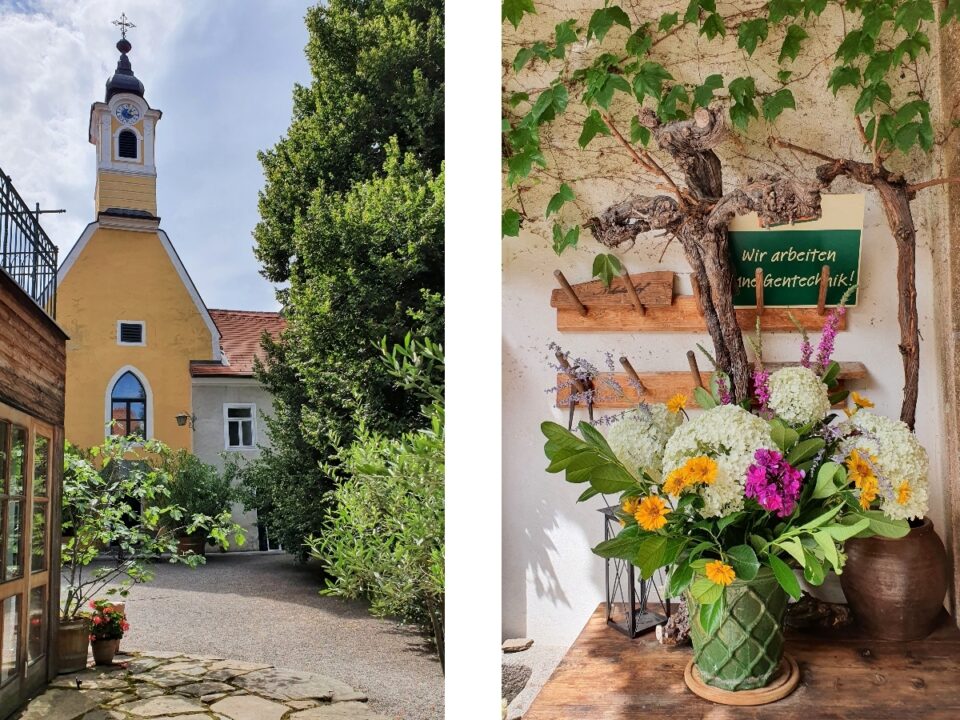 The Saahs family acquired the estate in 1894. Since 1971, Christine and her husband Nikolaus – as one of the first in Europe – began to introduce the principles of biodynamic Demeter agriculture. These regulations were developed by the world’s oldest bio-association, founded in 1924 in Germany. The name is derived from Démétér – the Greek goddess of fertility, land and agriculture. Biodynamic farming means more than just giving up spraying and chemical fertilization. It is an attitude of life, shaped by respect for all living things. The highest principle is to minimize interference with nature and its natural processes in order to maintain the quality and vitality of the soil. Because only then the soil can give the plant what it needs, and consequently the plant is able to pass on its life power to the person who will consume it. Therefore, the natural rhythm is observed and it is fertilized exclusively with compost and green fertilizer, supplemented with biodynamic preparations which are produced from natural substances by farmers grouped in the Demeter association. 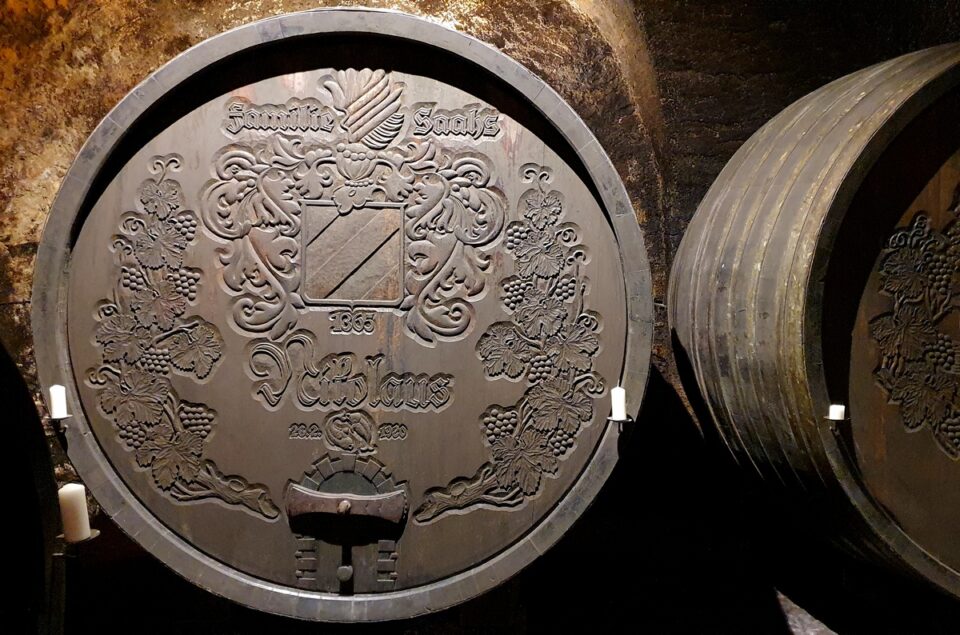 First, Christine led us to their almost 2,000-year-old cellars. We descended to a depth of 6.5 m by steep stairs, the temperature dropped with each step. It was 10°C inside. The walls of the cellar date back to Roman times, it was probably built into an old crypt. Here, some wines have been maturing in oak barrels for twenty years. Tartar, a crystalline substance that forms on the walls of barrels, is collected and added to drinking water jugs. The barrels are huge, with a volume of 2 to 12 thousand liters, they are decorated with wood carvings. We could see St. Severinus or also the old wooden bridge in Mautern, the second bridge over the Danube in Austria. Although the river is very close, water has never penetrated the cellar in its long history. Christine has three children, each of them has their own barrel. 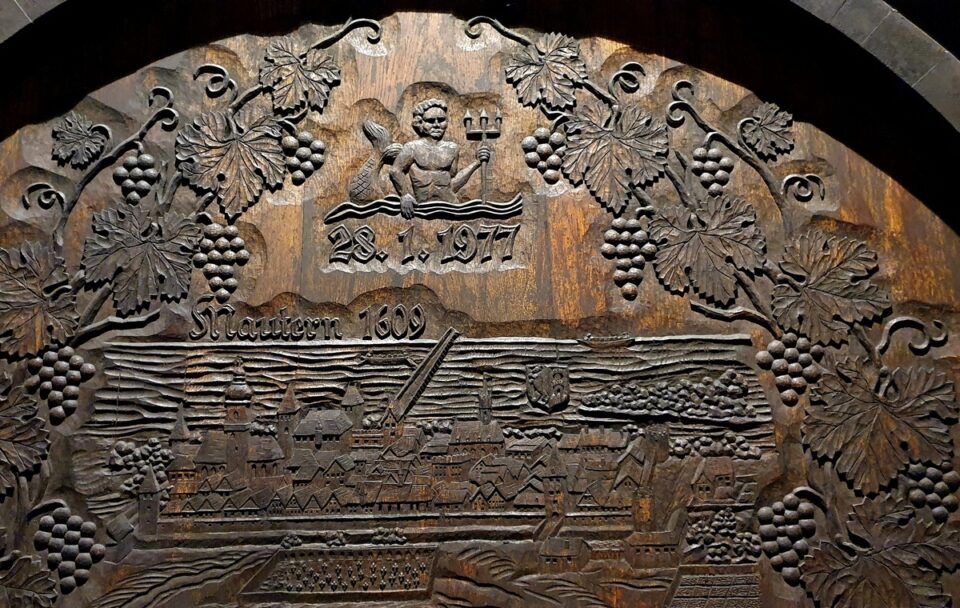 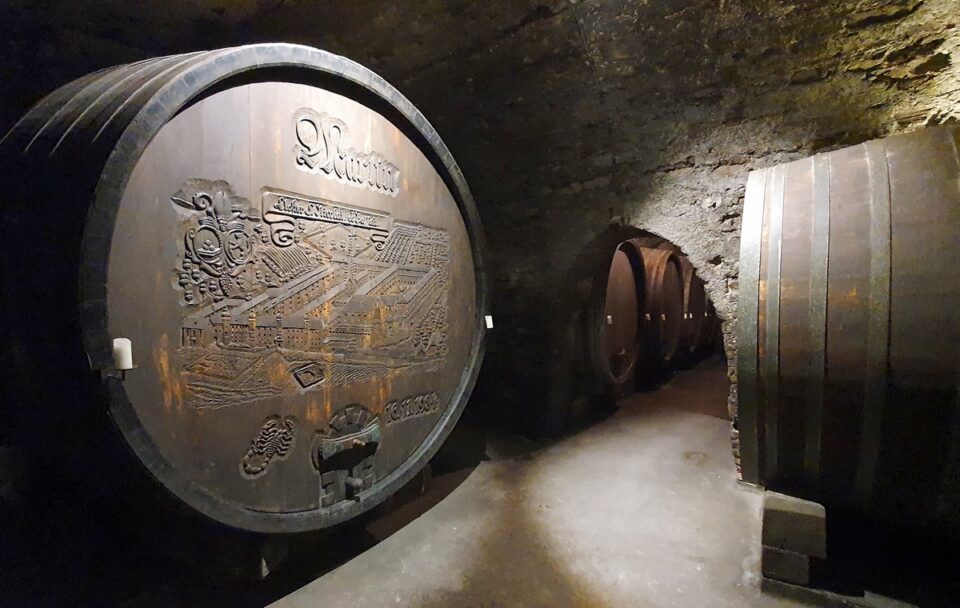 We moved from the cellar to a cozy wine tasting room. We also stopped at the 350-year-old press, the largest of its kind in the world. It weighs two tons and its 12-meter trunk is made of one piece of elm. 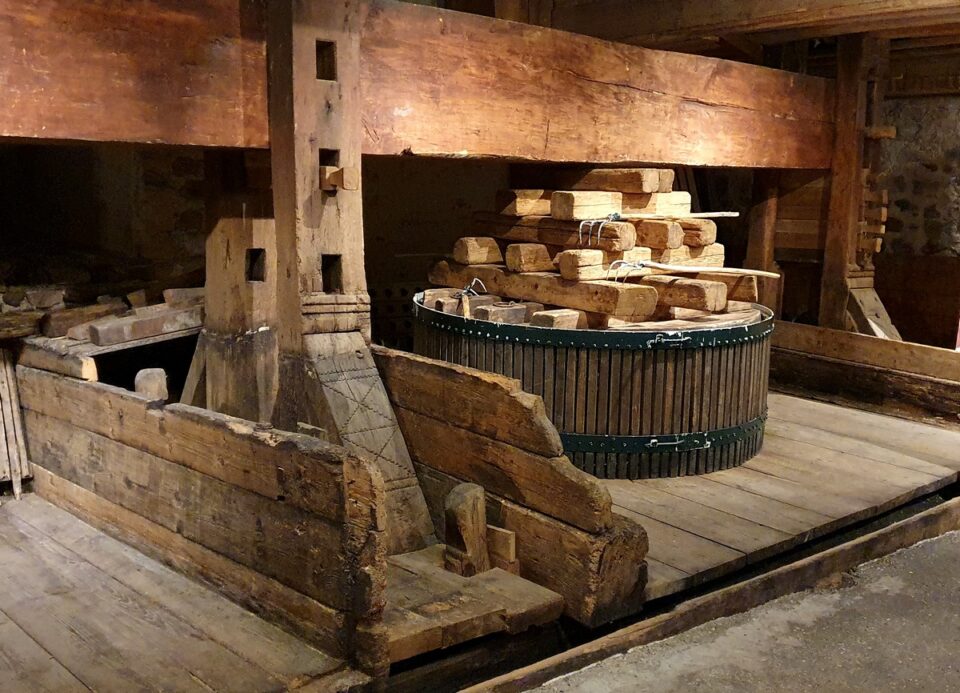 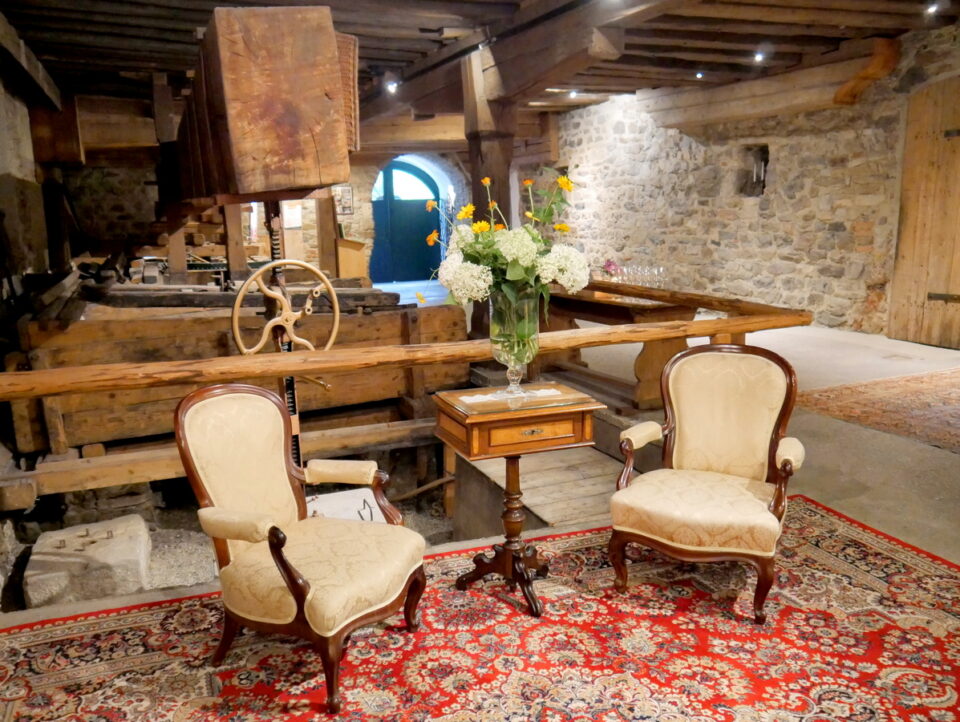 All offered wines have a Demeter certificate and are characterized by high quality. In Nikolaihof, you will not find seedless grapes, which are offered in supermarkets, because such grapes lack the source of their vital energy. On 22 hectares, the varieties typical of the Wachau region are grown: Green Veltliner, Rizling and Neuburger. After gentle pressing, the grapes ferment with their own natural yeasts, which develops the unmistakable character of the wine. My favorites were the slightly spicy Gewürztraminer and Gelber Muskateller with a fresh, summery, fruity taste. 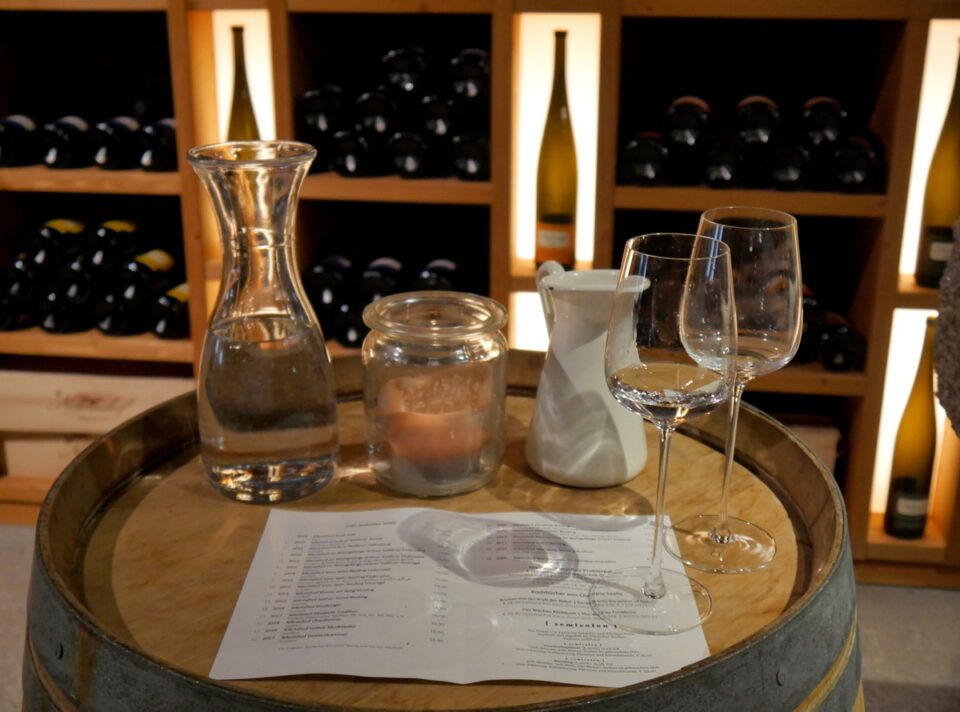 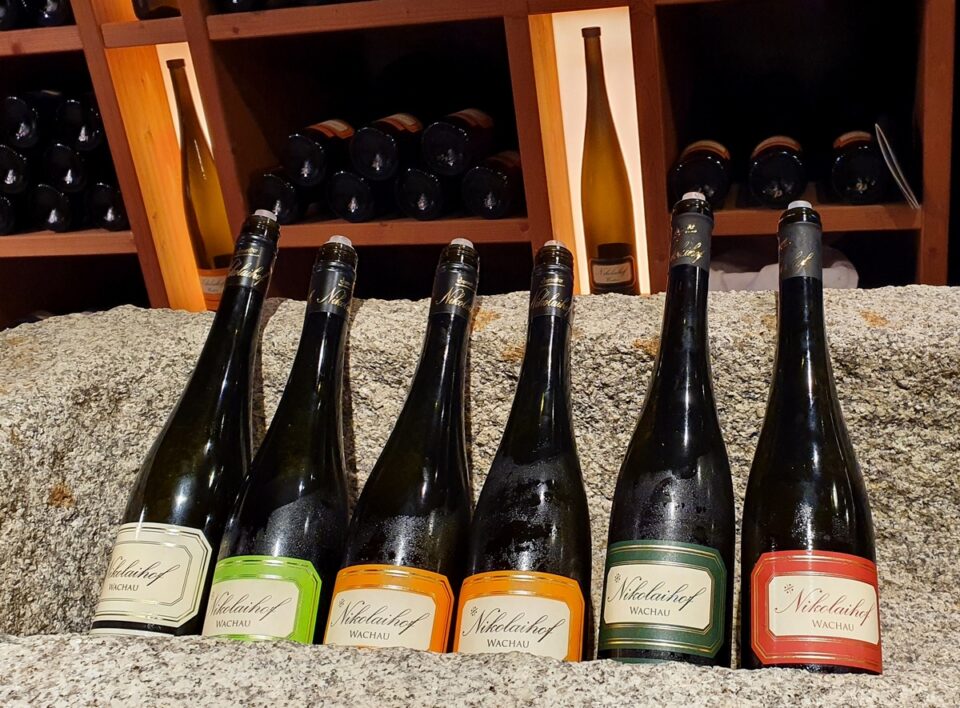 In addition to wine, other regional products are also processed here, especially apricots, from which compotes and brandy are produced. Other specialities are also on offer, such as green walnuts marinated in walnut liqueur. With the same passion and zeal, they also produce natural cosmetics based on Demeter oil from grape seeds. 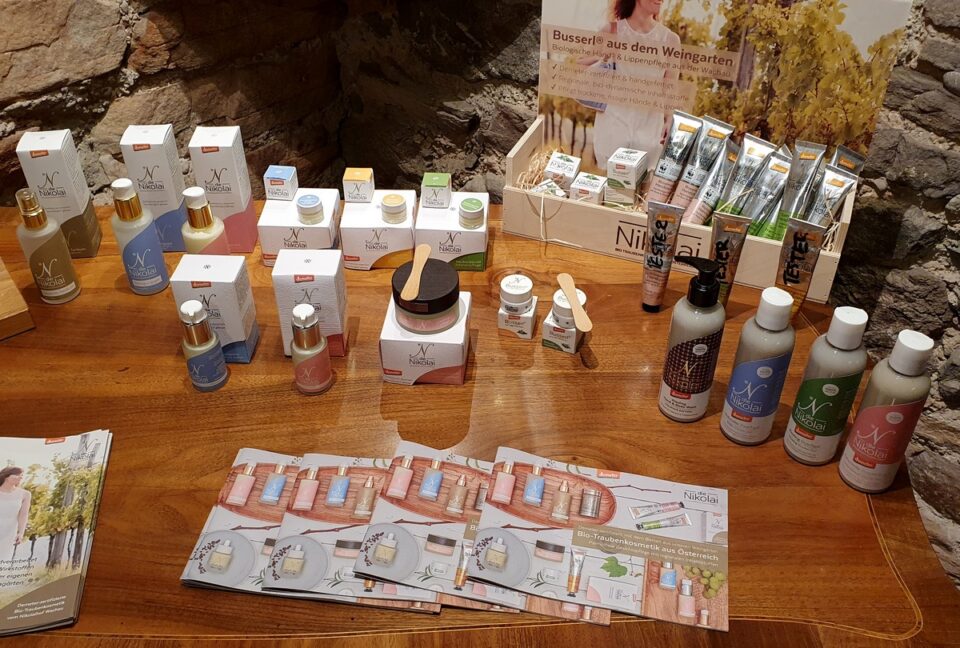 Another one of Christina’s pride and joy is her garden, which we could also see. Christine enthusiastically showed and named the flowers she grows without any chemistry. Suddenly, she stopped, tore off an orange lily flower and handed it to me asking, “Have you ever tasted this flower?” Christine uses many plants — both leaves and flowers — to prepare meals or at least to decorate ready dishes. According to her, the plants reflect what happened to them during the process of their growth, the full power of nature, which is thus passed on to man. Meals thus become not only more beautiful to look at, but also more valuable. 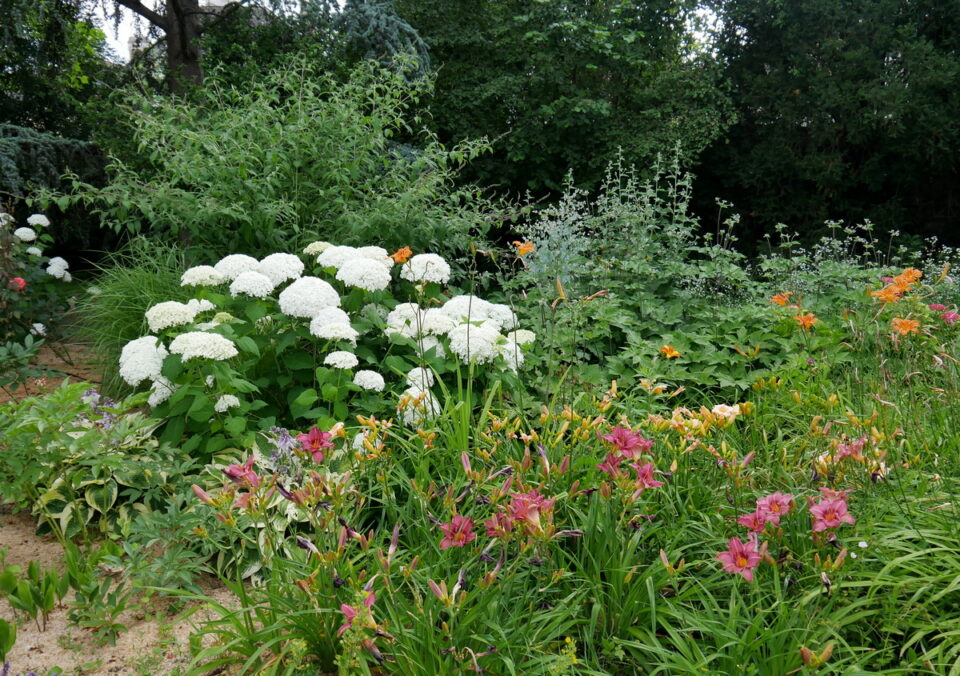 Beautifully shaped flower petals, their vivid color and delicious scent not only attract insects but also have a positive effect on humans, brighten the mood and warm the soul.

Afterwards, we crossed the road and continued along a natural path. Christine showed us the flowers of yarrow and explained how difficult the Demeter principles are. This plant is one of the ingredients in natural fertilizer which they produce themselves. However, you are supposed to only tear off the miniature white petals without taking the tiny green beds from which they grow! From here, we also had a nice view of the Steiner Hund hill with the terraces of the vineyards. St. Severinus had chosen a very pretty place for his prayers indeed! 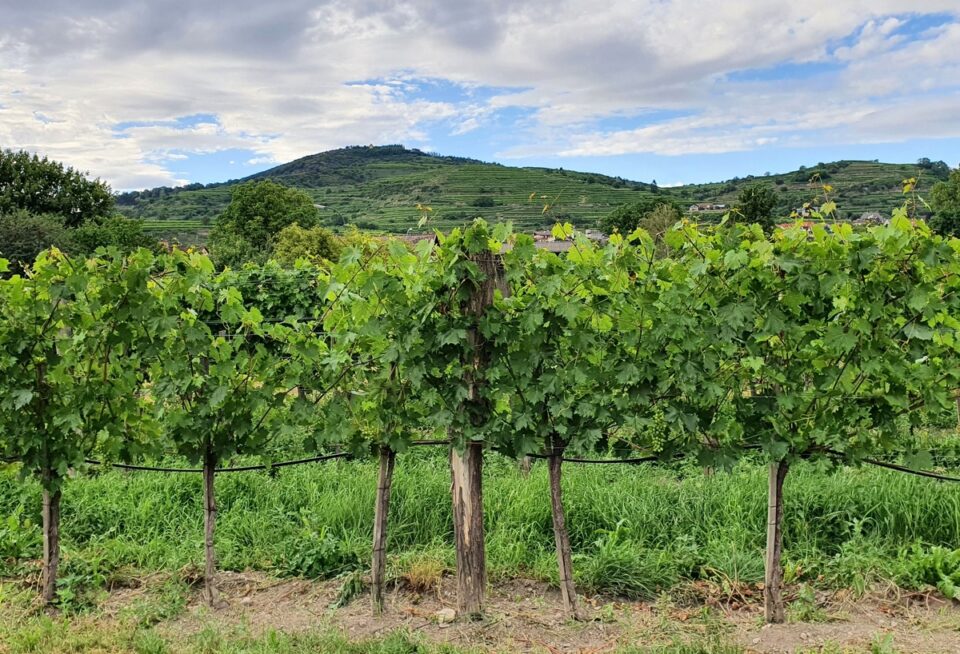 The path led us to a modern guest house, which – like the already mentioned cosmetics and wine tasting – is in charge of the next generation of the Saahs family. There is also a playground for children made of natural materials, a natural swimming pond and a wellness pavilion with a sauna. And also priceless peace and quiet… 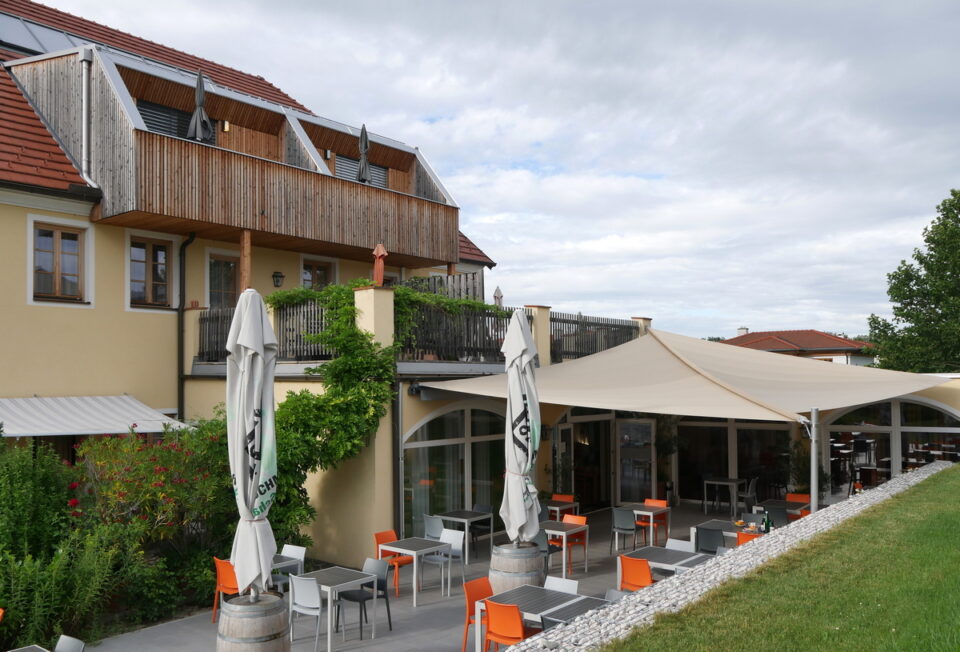 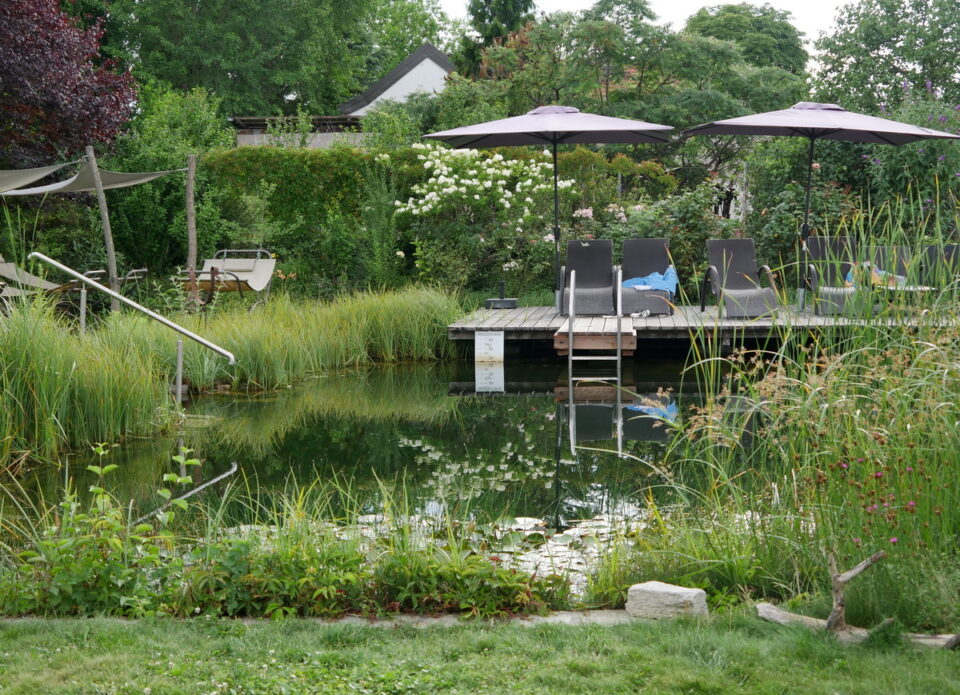 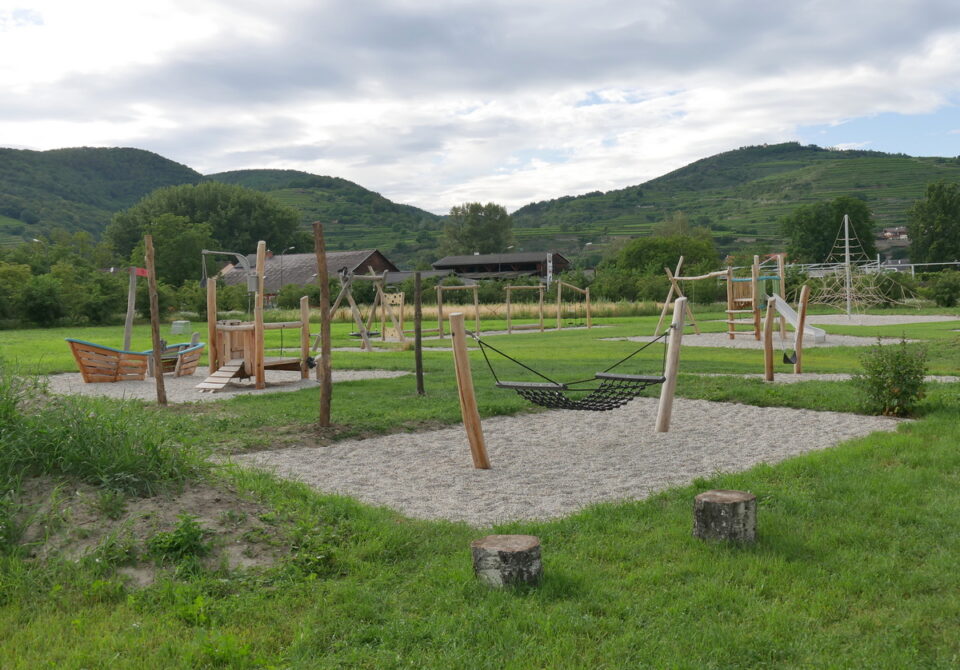 We returned to the yard with the old linden tree. It was a pleasant summer evening, the tables were already filling up. But even if the weather is not friendly, you can also sit indoors. Since we were here at the time of the pandemic, they solved the problem of keeping distance very tastefully and stylishly – they separated the tables with panels from the old windows, which not only complied with the ordered regulations but also enhanced the homely atmosphere of the place. 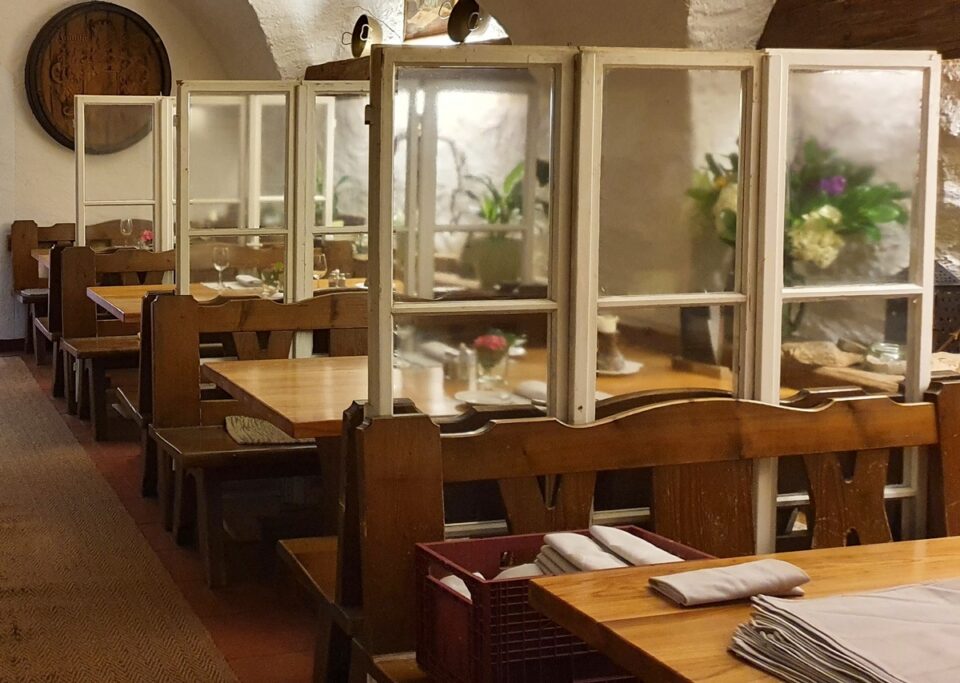 A remarkable cookbook brought me to Nikolaihof. At the end of our visit, we were pleased to accept the invitation to dinner so that we would not only have to read about the tempting dishes, but also be able to taste them. We chose nettle salad, spicy bull’s chest with a sesame crust and game meatballs. 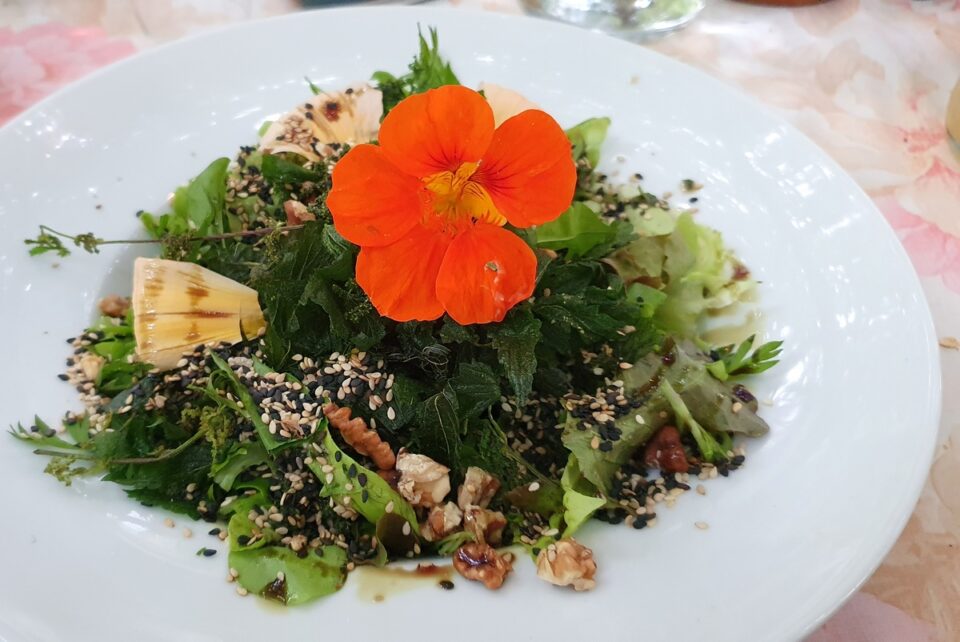 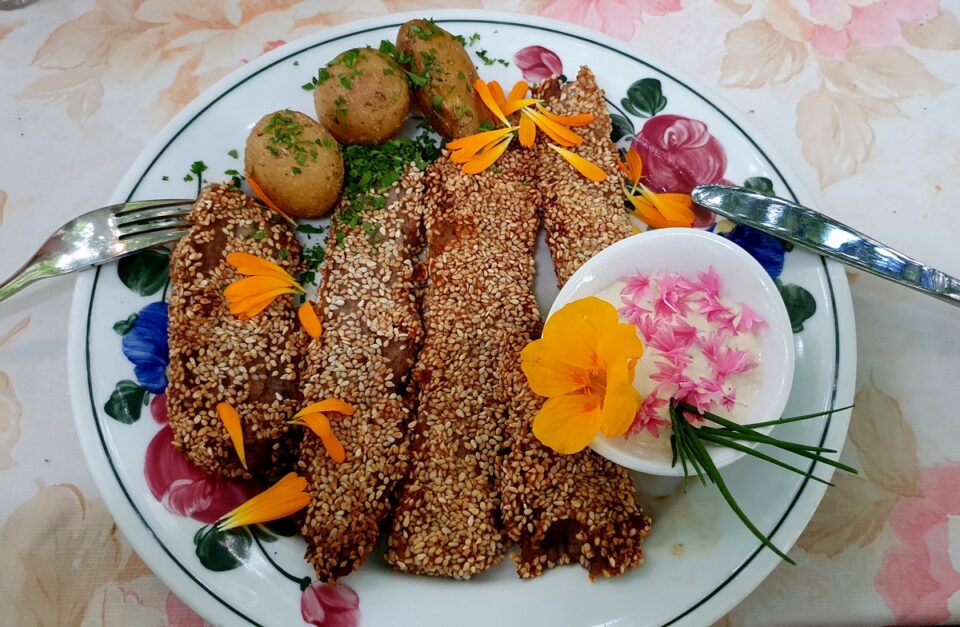 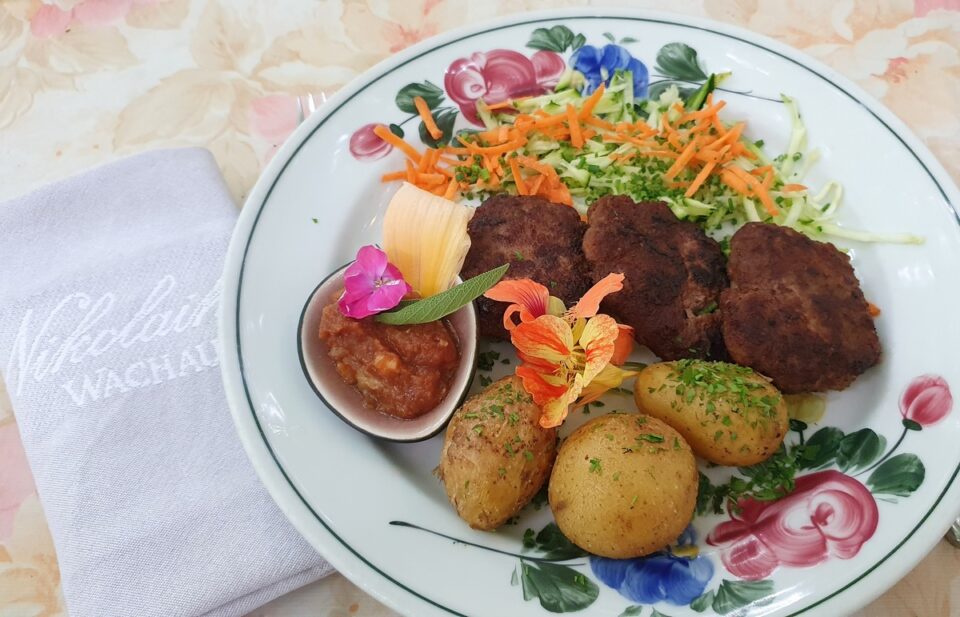 As in the book, the food on the plate was beautifully styled and decorated with flowers. And everything tasted wonderful!

We didn’t even want to leave – we were in the middle of the picturesque Wachau valley region, which is even inscribed on the UNESCO list, sitting under a century-old linden tree, enjoying dishes from the best cookbooks in the world and drinking excellent wine. What more is needed for such moments of happiness? 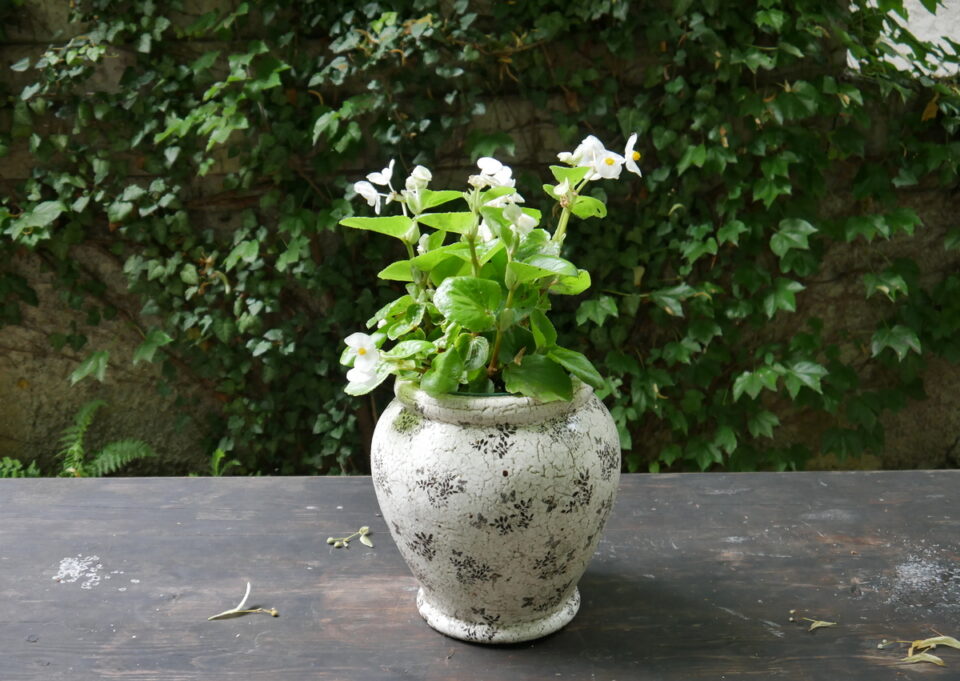 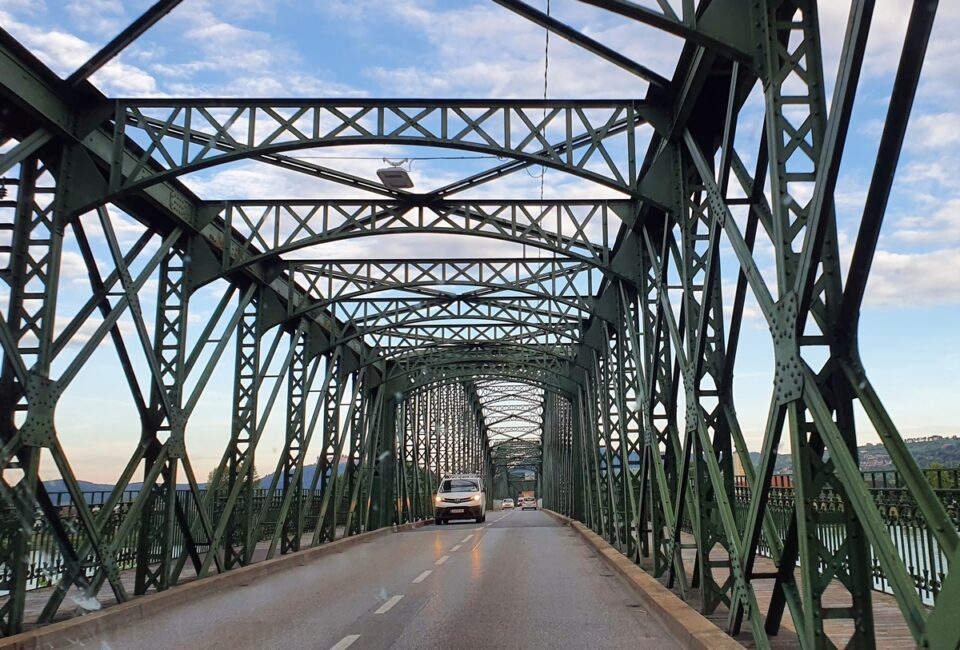 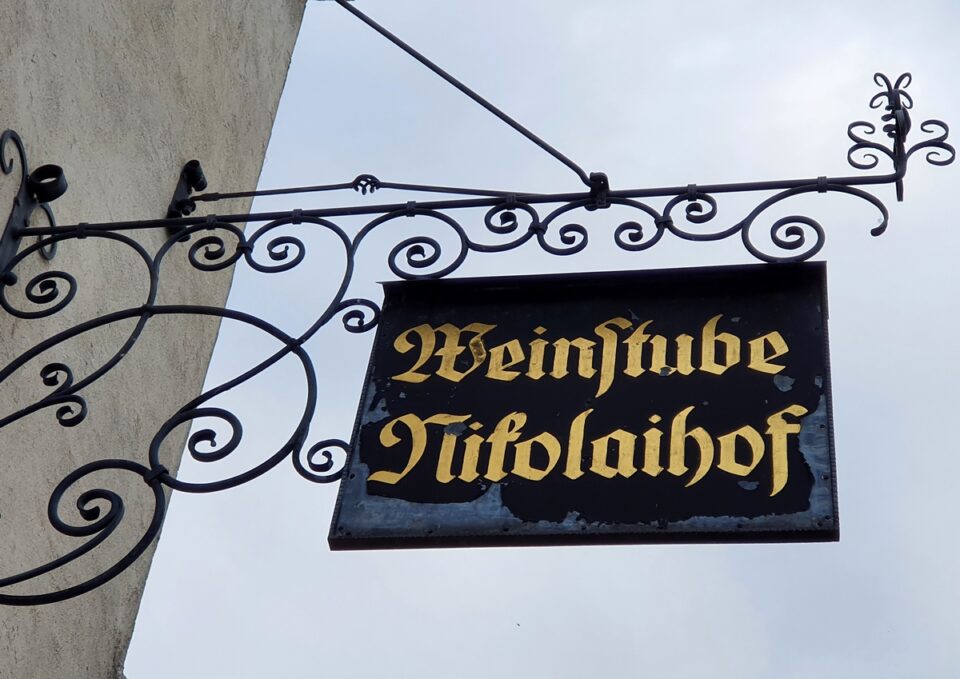 Possibility to order the cookbooks of Christine Saahs (both award-winning books were also published in English): here

I would like to thank Mrs Christine Saahs for the invitation and the opportunity to get to know their family winery better. 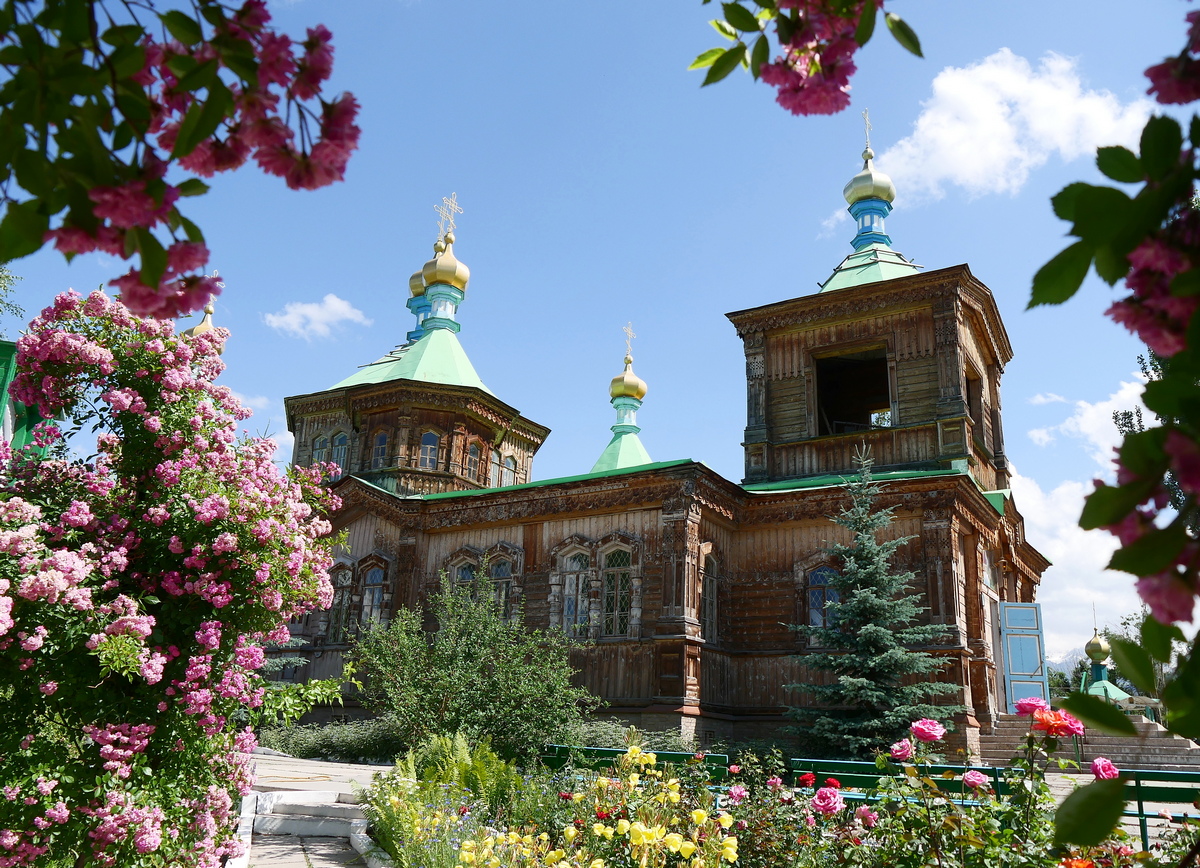 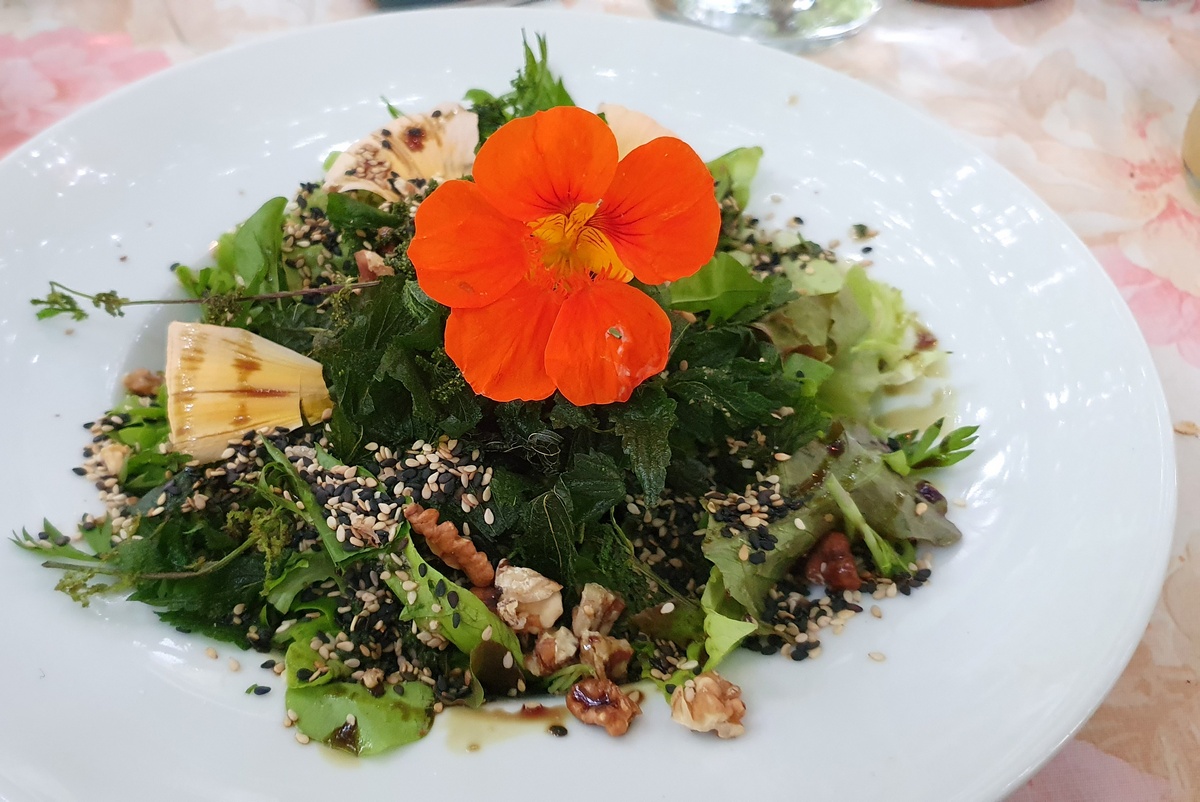