The white rabbit did not appear any more, but curious squirrels came to visit me and every morning some little birds sang for me a morning serenade on the trees near my log cabin. Of course, the smallest one sang the strongest. 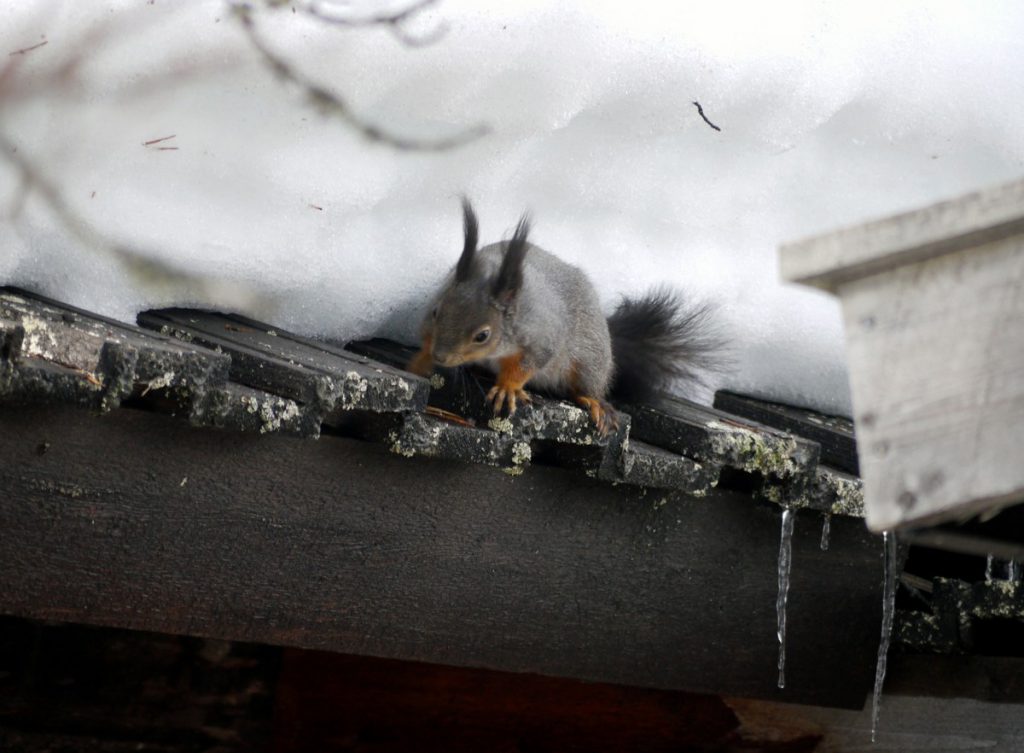 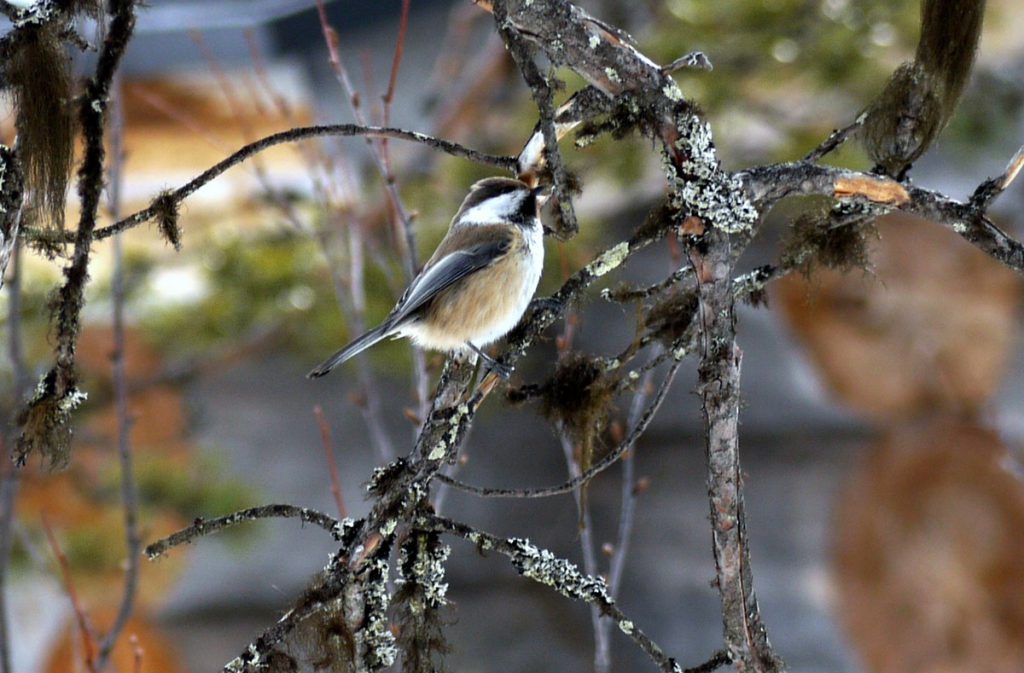 Today we were given a four-hour snowmobile tour. I have never sat on anything like this before but I have already ridden bicycles, camels and donkeys – so why not try this nice red machine? 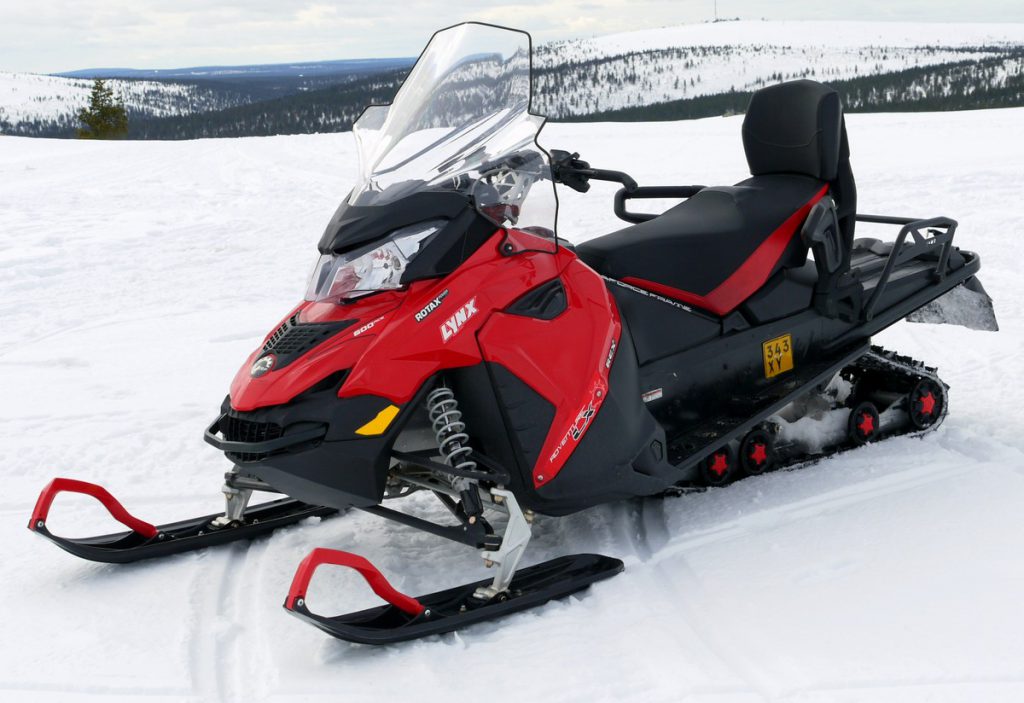 First, we were given thermal clothing. Small, tall, men, women – we all perfectly harmonised in the huge blue and black overalls. At this moment I understood why Finnish does not distinguish gender, the word hän means both “she” and “he”. Can you imagine, if two Finns are talking about a third person and somebody overhears them, it is possible that this person does not know at all if they are talking about a man or a woman. In the same suits, we all were also hän. 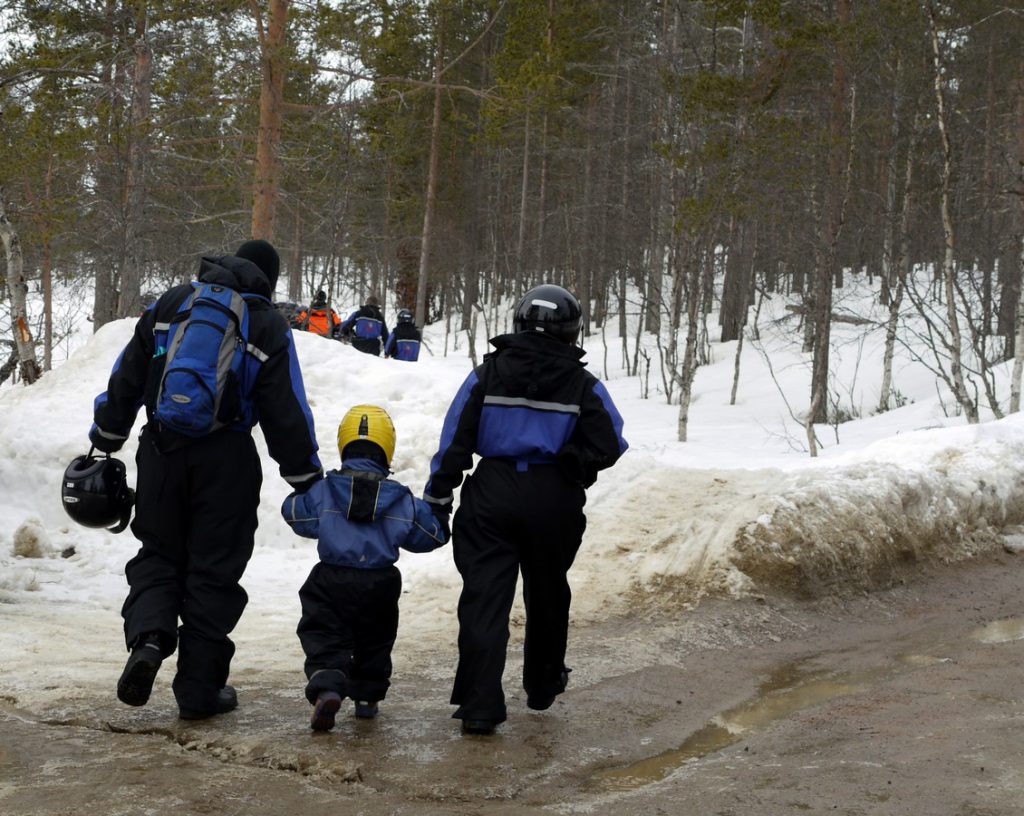 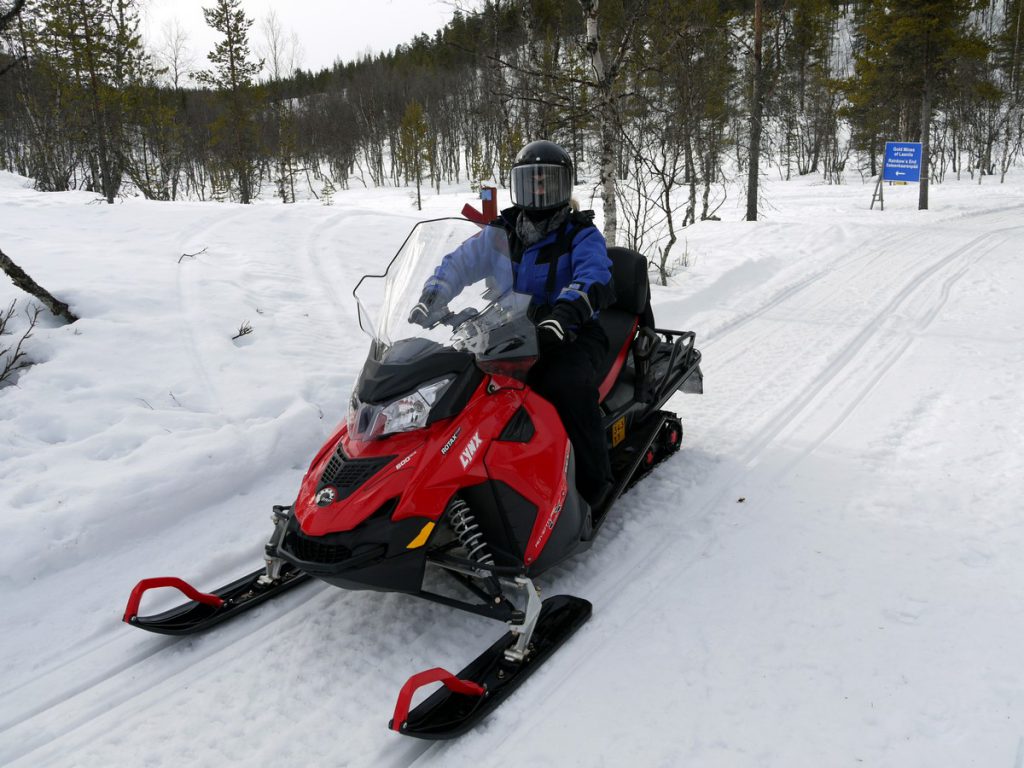 Winter boots belonged to our equipment as well, never mind if they were too big, they gave me thick green socks. A mask, a helmet and gloves were also provided although both seat and handlebars were heated. A short training followed: to pull out a knob and press an orange button – the engine launched and peeped two times, then to give gas and we could go. The tachometer showed options up to 140 km/h but we started moving slowly. On the rough terrain with snow bumps and potholes, we jumped up and down like on a horse. 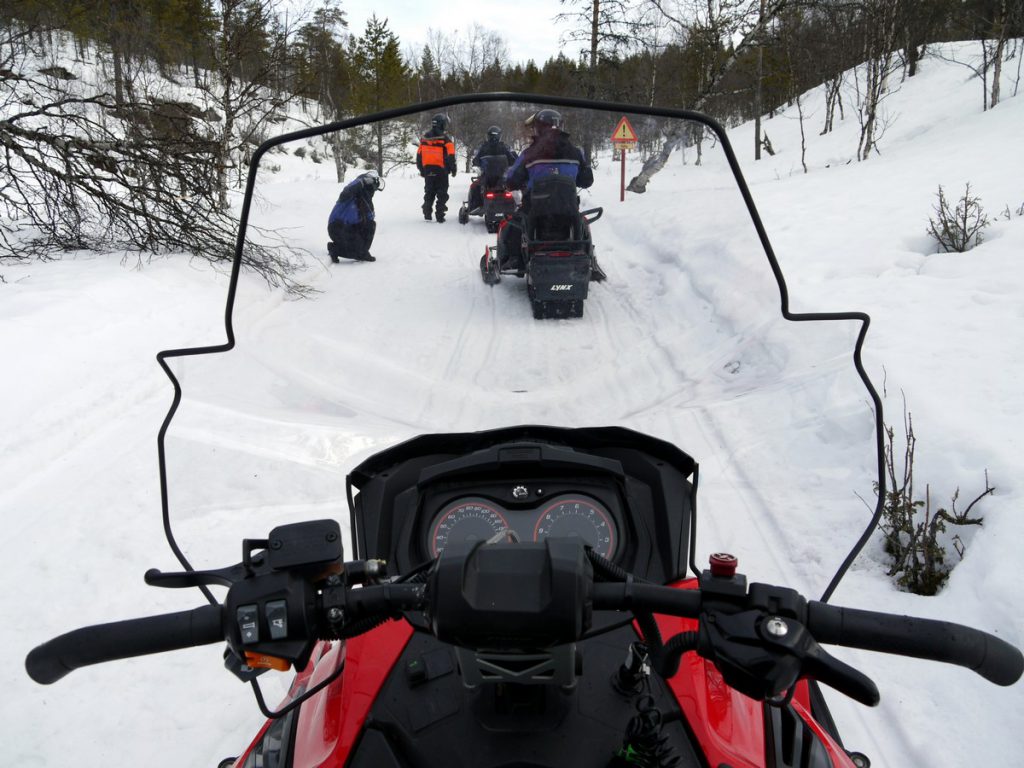 We had to cross the road several times. First, our guide crossed it, stopped on the other side and waving his right hand gave us a signal to move. At one crossing like that, I noticed a traffic sign with a local place’s name with Č. A nice Č with the hook! I have always been persuaded that you can find such Č in Slavic languages only. In English, you need “ch” to express it, in German even four letters: “tsch”. And suddenly here, more than 200 km above the Arctic Circle, I could see our Č – I immediately felt a little bit like home. 🙂 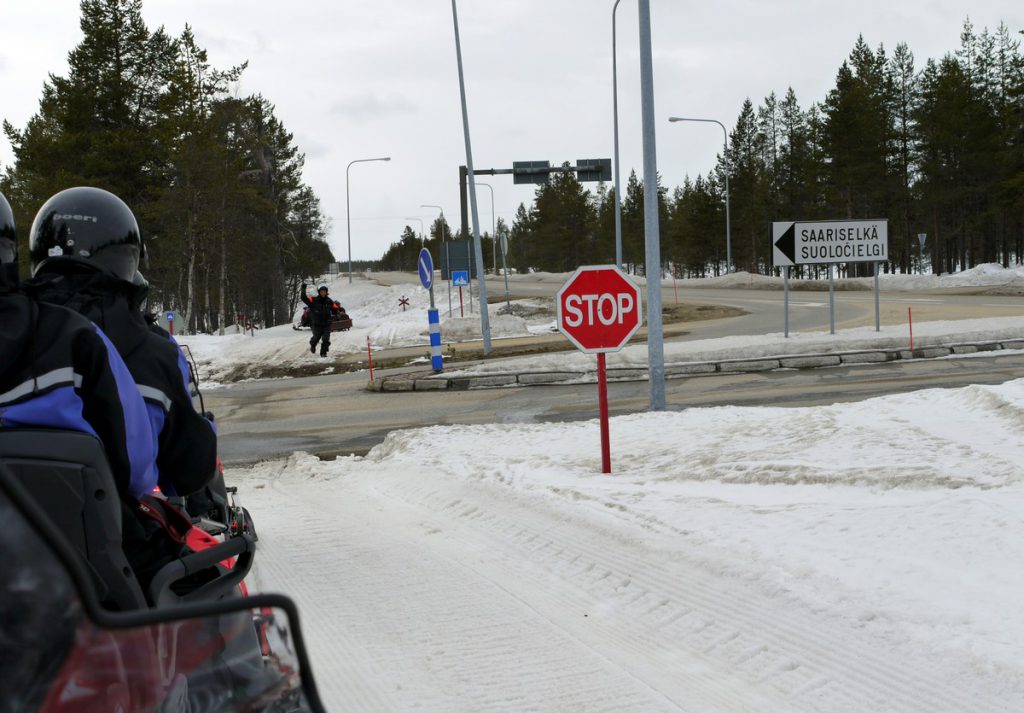 From time to time other tourists on snowmobiles or cross-country skiers crossed our track. There is 230 km of maintained cross-country ski trails in the area. We also passed by such boards – a short lesson in Finnish! I think Finns love using double letters, they have words like lappeellaan (flat) or liikkeessään (showroom). Can you imagine dictations at school? Very long words are created using double letters, I could not read the inscription on the board if I had not stopped there, and thanks to God, there was a very clear picture on it. According to the Finnish edition of the Guinness Book of Records, the longest Finnish word is this one with 61 characters: lentokonesuihkuturbiinimoottoriapumekaanikkoaliupseerioppilas (technical warrant officer trainee specialized in aircraft jet engines). 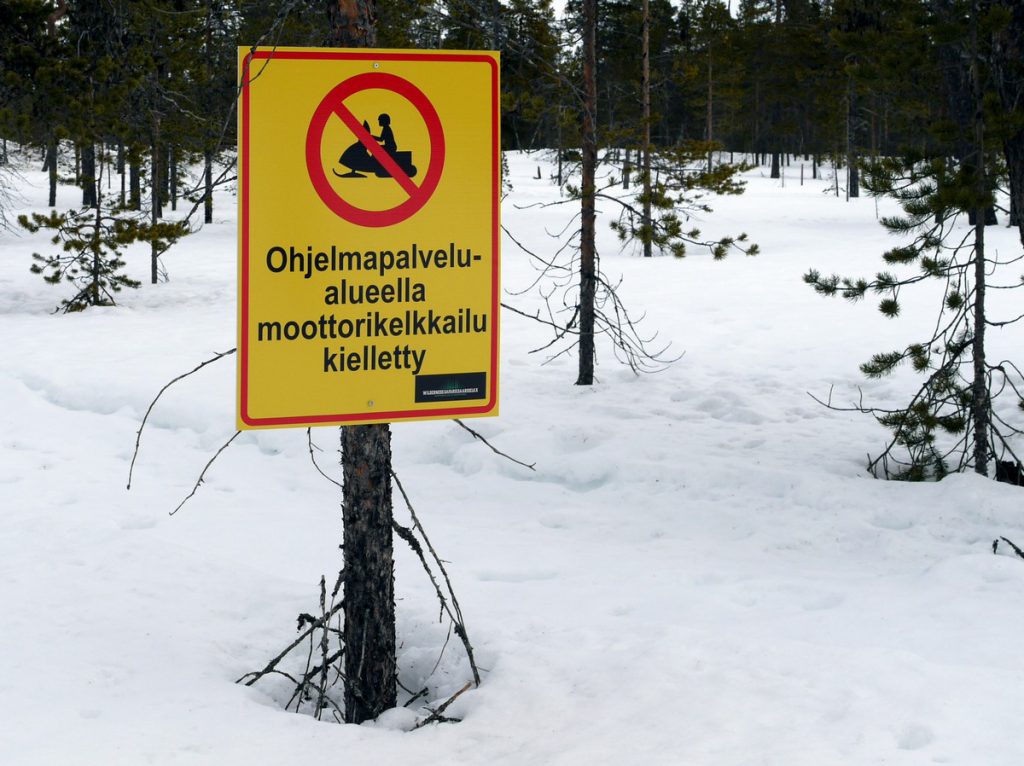 We could drive our snowmobiles at higher speed on flat plains, but at 40-50 km/h only. I had already a feeling that the snowmobile and me and also the breakfast in my stomach were trembling. So I preferred to slow down and enjoy the landscape… We passed the river, where for almost 150 years adventurers and tourists infected with gold fever from near and far were coming to pan for gold. 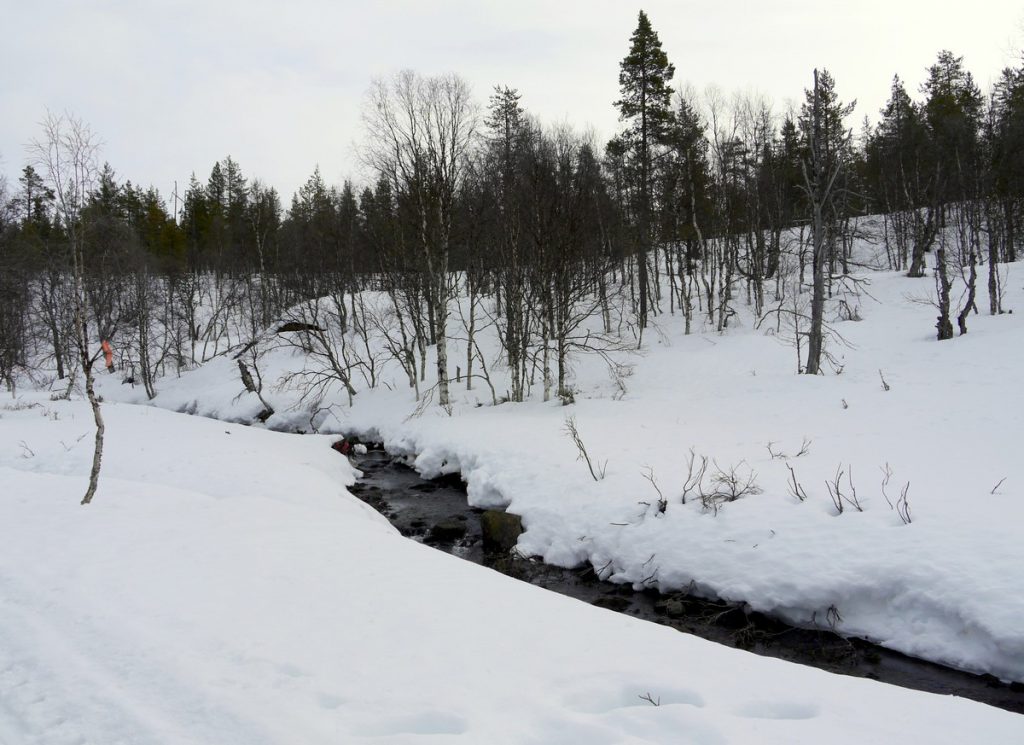 But the landscape was rather dull. 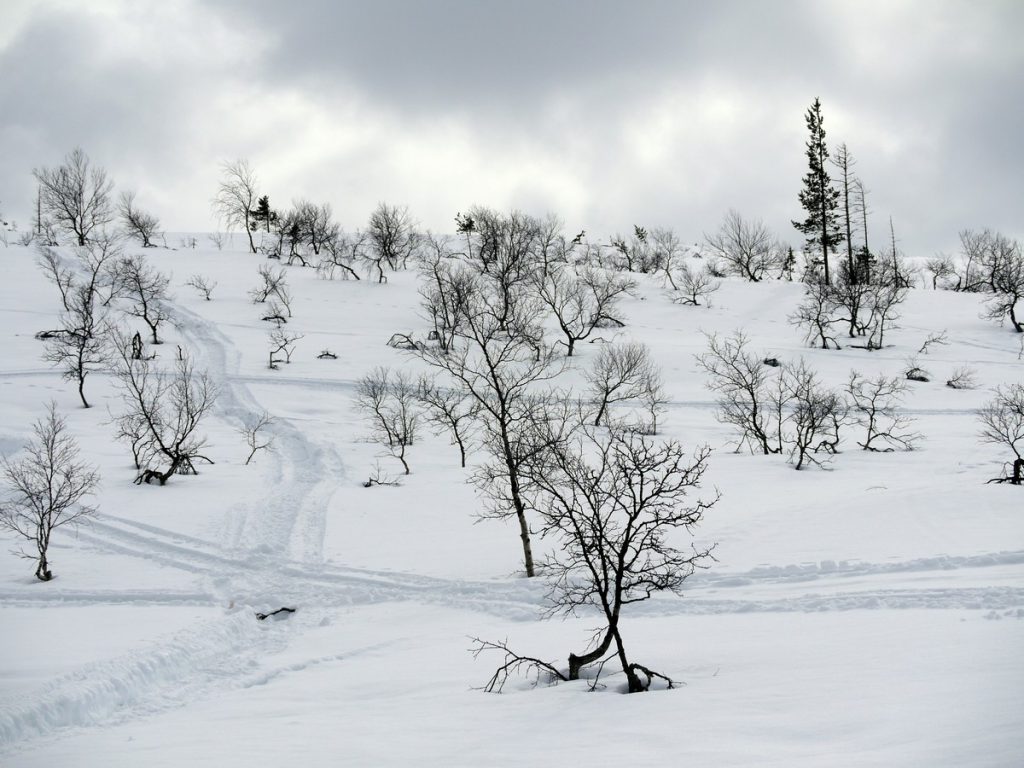 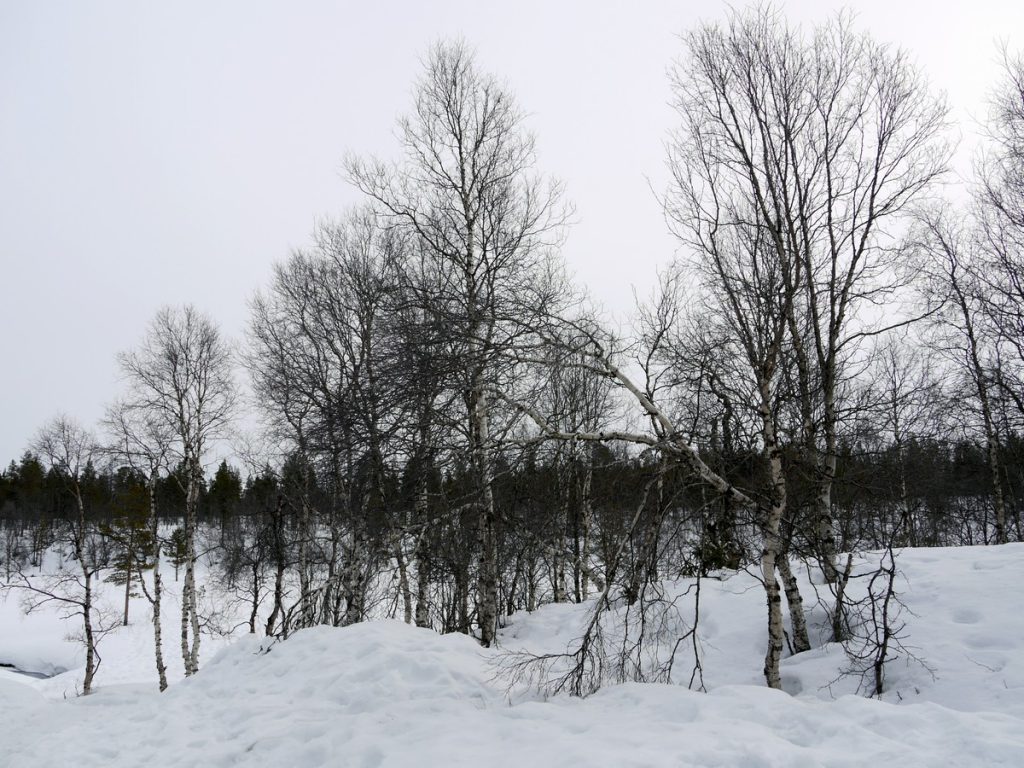 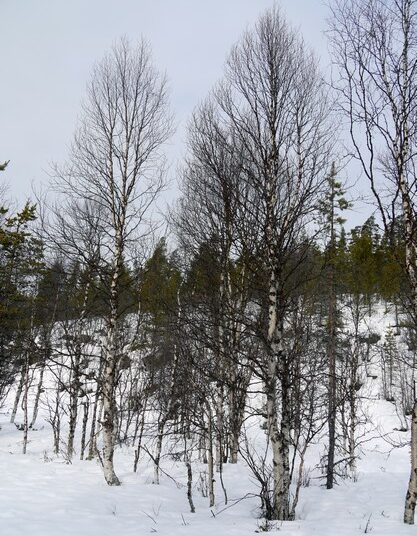 Some birches bowed and sunk their “heads” in snow as ostriches do with their heads in the sand. I would like to know if the trees straighten their weak trunks when the snow melts. 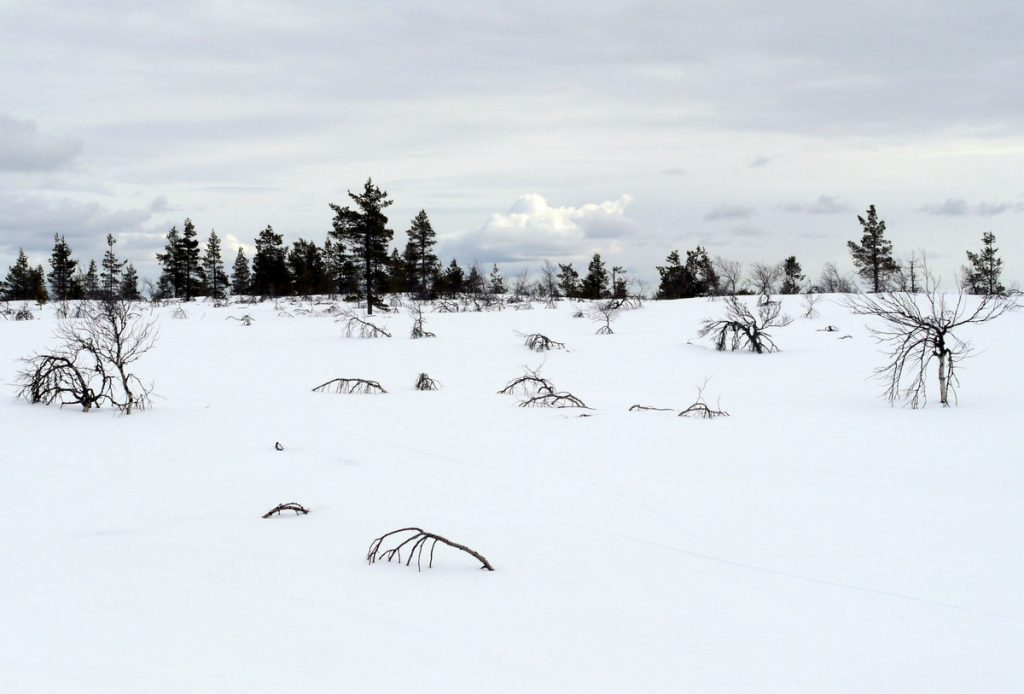 Our next stop was the hill Kaunispää (400 m above sea level) on the boundary of Urho Kekkonen National Park. There was an interesting wooden construction on the top. And there another lesson in (not only) Finnish. 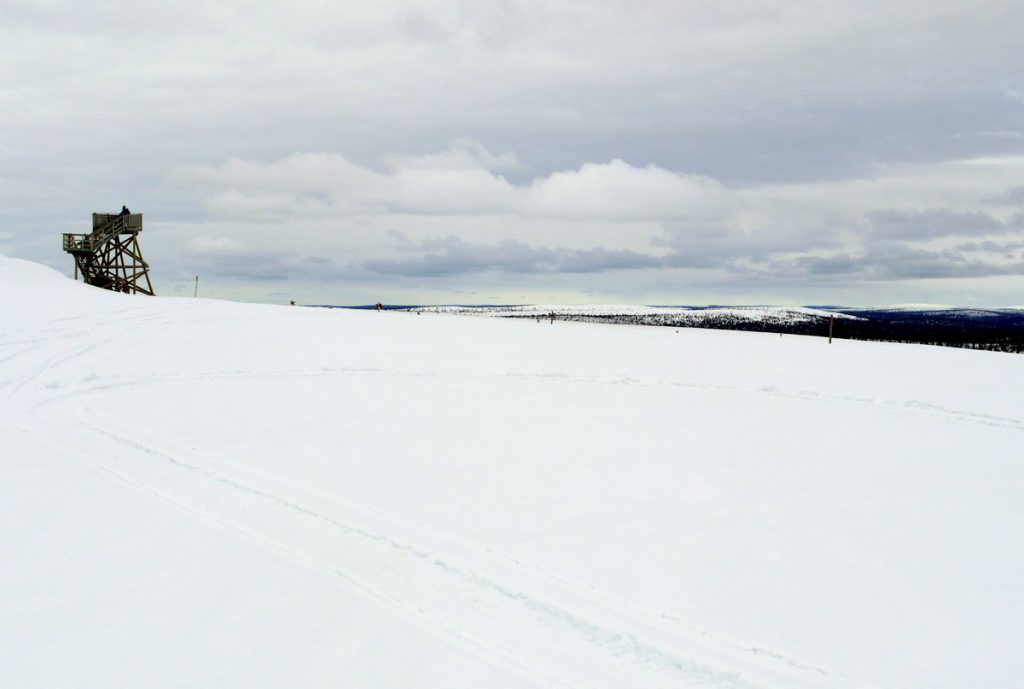 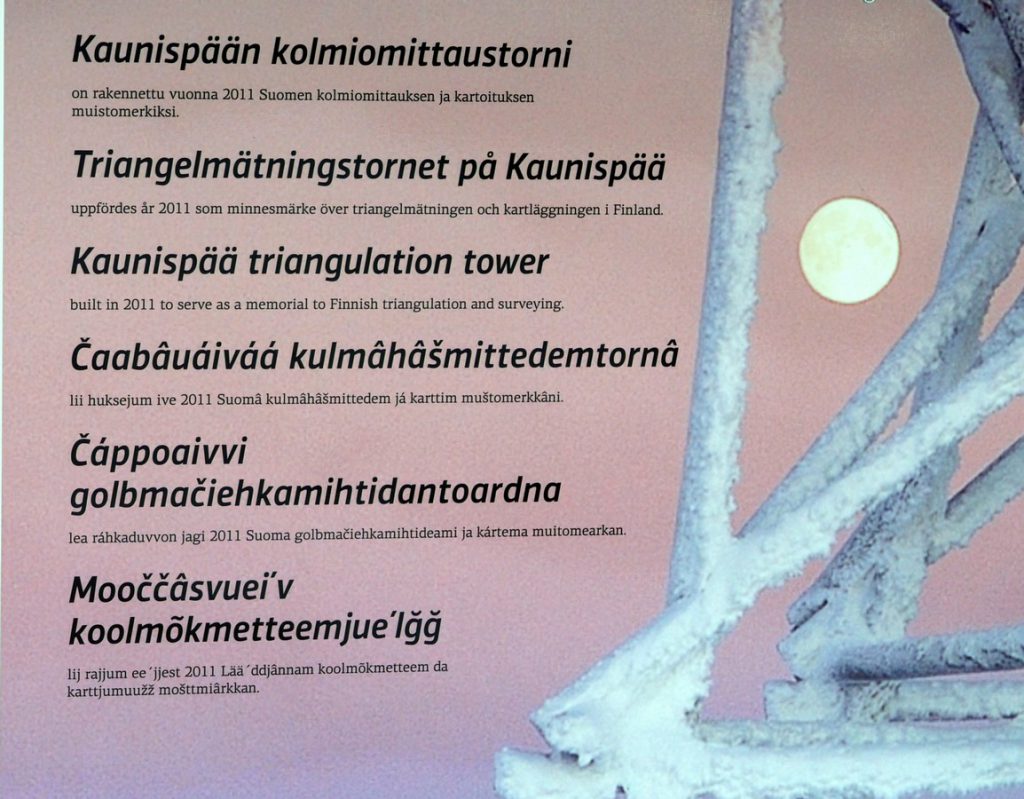 The first notice on the board is in Finnish, below it in Swedish which is the second official language in Finland. English follows, enabling it to be understood by foreign tourists as well. After that, there are three other inscriptions – three different languages of Sami people (Laplanders). They are not offended if you call them Laplanders but you will get more respect if you say Sami people. Lapland is a geographical term, it is the region where Sami people live. By the way, they have their own flag, anthem and parliament as well. And several languages (not dialects!). And they use our č, š and ž, even double as you can see on the board. What’s more, they even have g with a hook! 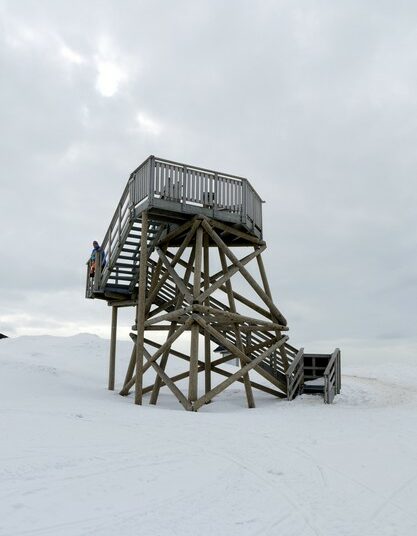 It says on the board that the wooden construction is a triangulation tower built in 2011 to serve as a memorial to Finnish triangulation and surveying. There was a very nice view from there. 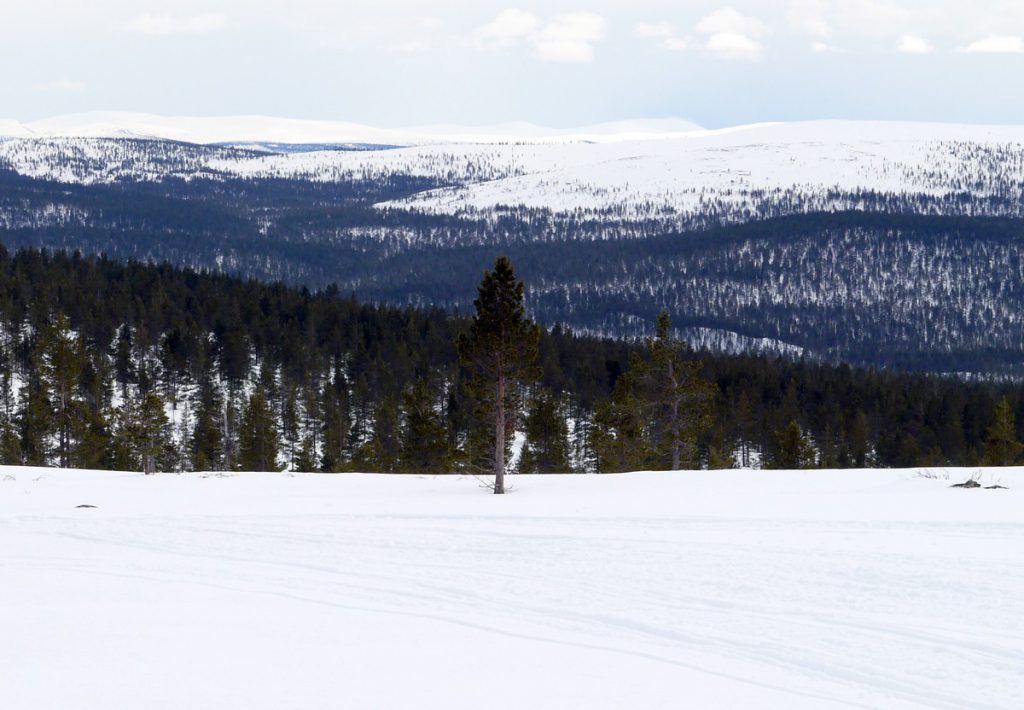 We made short stops on the hills Palopää and Urupää. Our guide told us that it was clear and we would be able to see Russia – white, with snow-covered mountains in the background, which are about 40 km far away. But I could argue against this clear weather. It looks a little bit different in our latitudes. Here I could see only grey and white in different shades, sometimes blue. Trees were black, coniferous ones dark green. We – dressed in our suits – did not differ from the surroundings, the only motley colours were the red on our snowmobiles and some orange on the guide’s overall.

Before we started the snowmobile safari it was about zero degrees. I took a picture of a roof with small icicles. When we came back it was already seven degrees above zero. Thawing. I again took a picture of that roof. Can you find at least ten differences between the two pictures? 🙂

We finished our trip in a simple cottage, where a delicious fish soup was warmed for us (the recipe soon). The moment we finished the soup, they took all the plates made from special hard paper and the plastic spoons and threw EVERYTHING into the oven! It burned! Not like the bark or the flyer paper in my cabin! Does it mean that it is working with plastic here??? After the soup, we were offered a thick pancake with strawberry jam and tasty small nuts cookies. 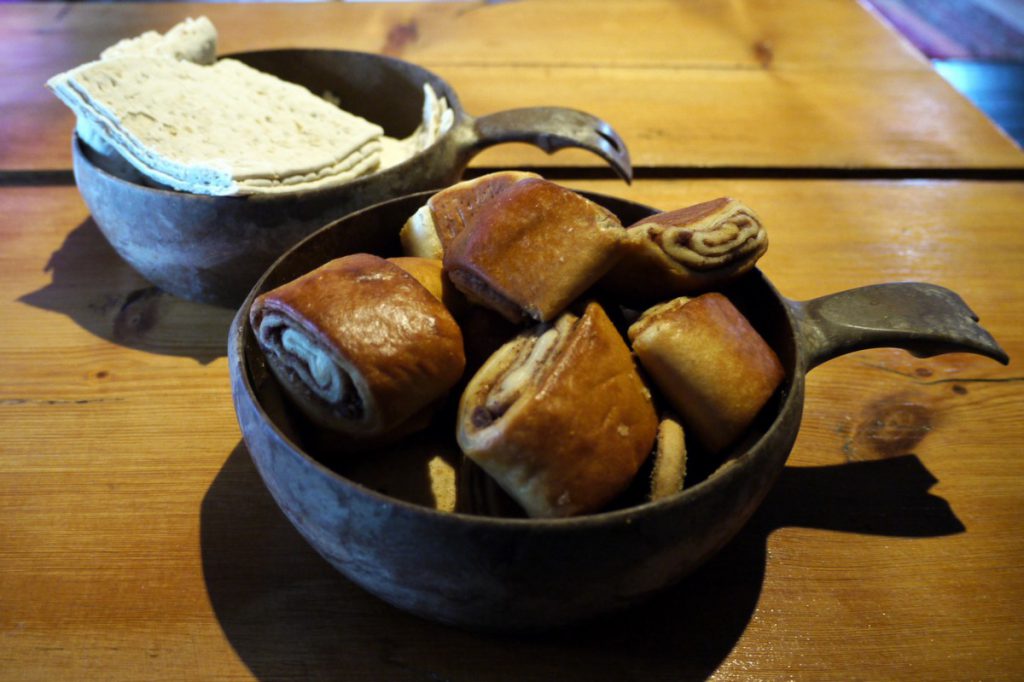 Outside we noticed a funny small house on a tall foot. It is a “refrigerator”, used once by Sami people. It is placed so high to prevent wild animals to steal and eat the stored food. White rabbit, where are you? 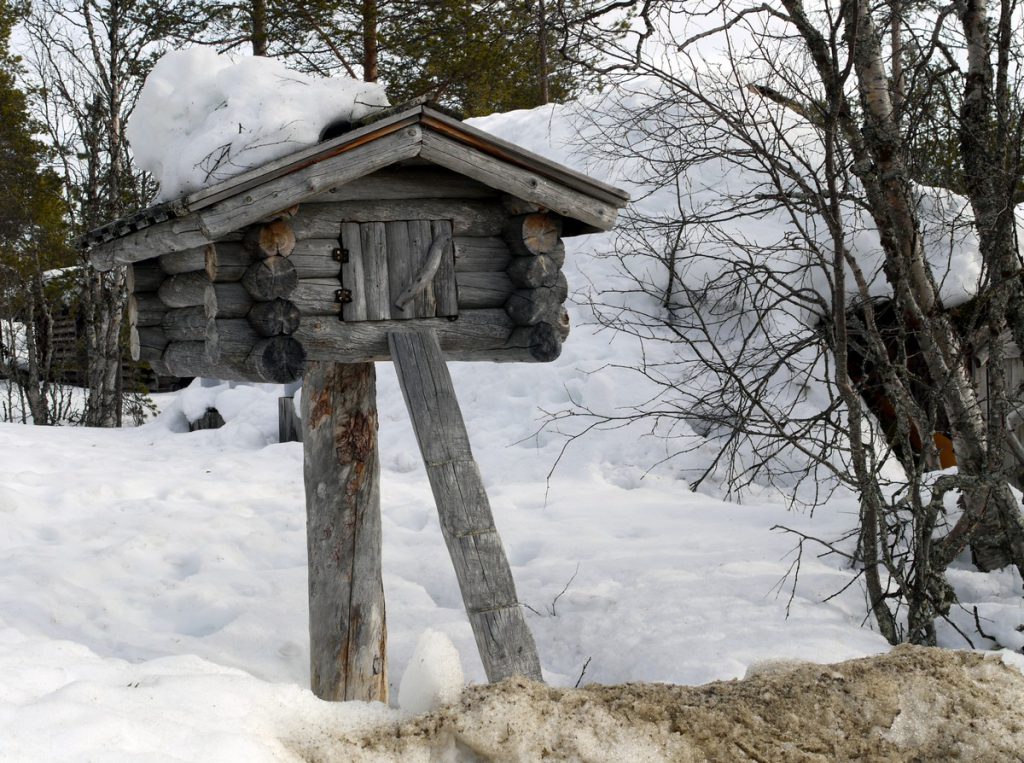 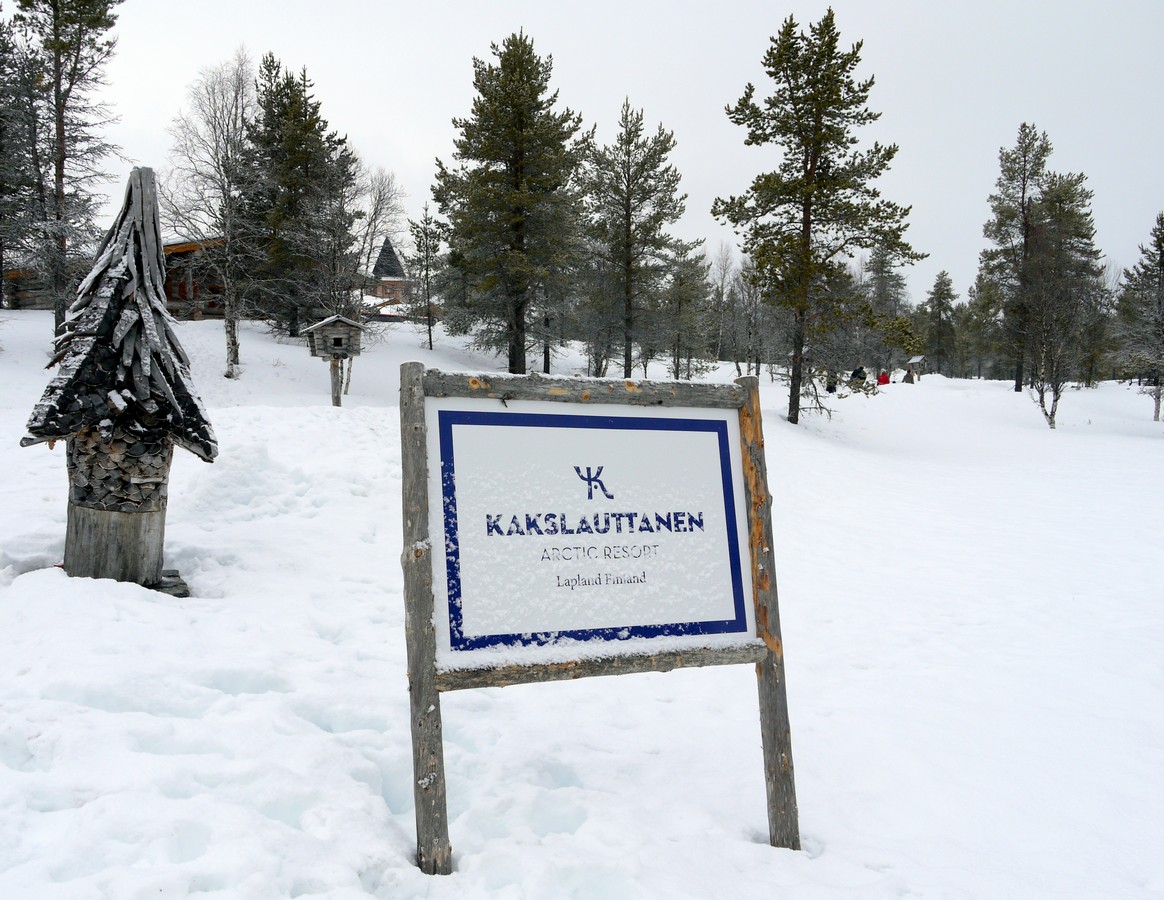 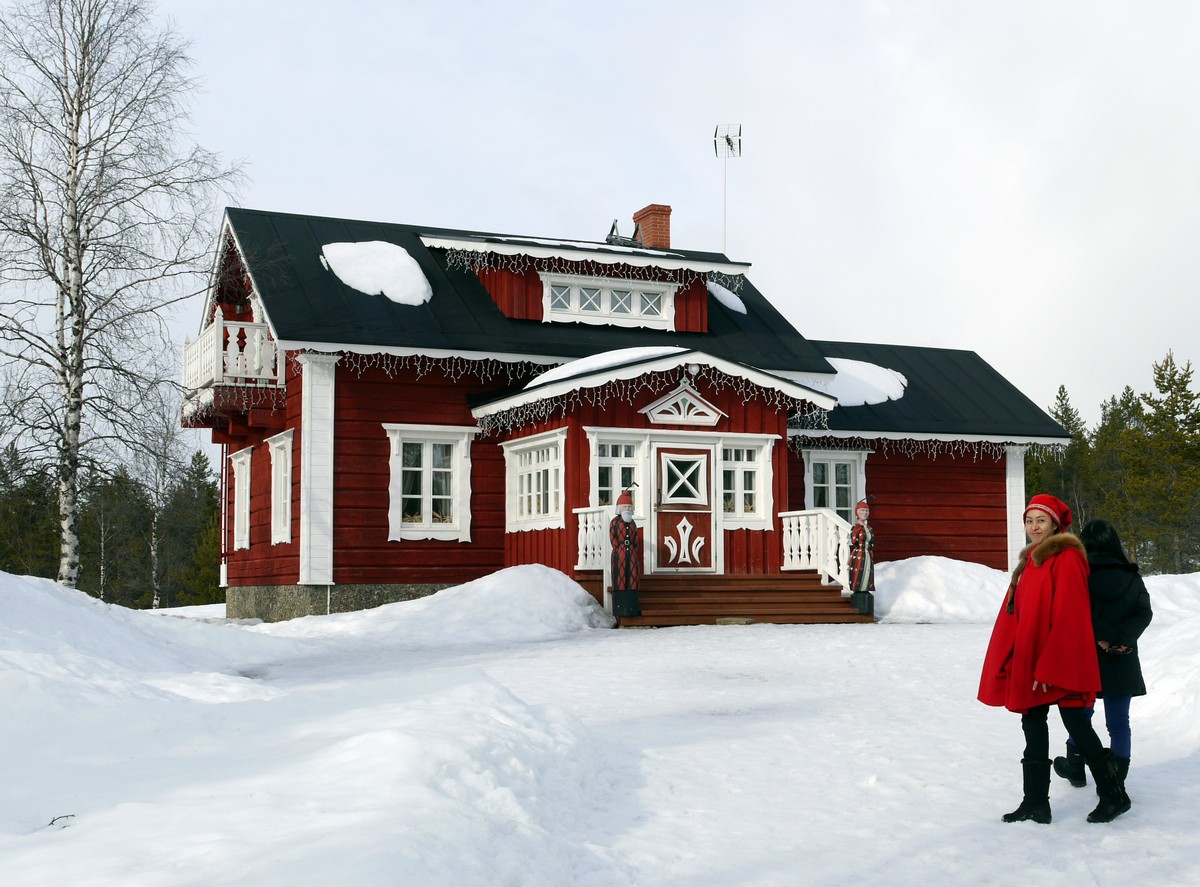