There had been neither radio nor television in Oman until 1970, only one post office, one hospital and three boys’ schools in the whole country. Local people had lived in clay brick houses or shacks made out of palm tree leaves, without tap water and electricity. Everything changed when Qaboos bin Said took the power in a palace coup against his father, Sultan Said and began to invest the earnings from oil into the development of his sultanate. That is why the 23rd of July, the first day of his reign, is celebrated as Renaissance Day.

Omanis are Muslims, of whom three quarters follow the Ibadi school of Islam. Sultan Qaboos financed the construction of many mosques, the Sultan Qaboos Grand Mosque in Muscat is the most magnificent of them. 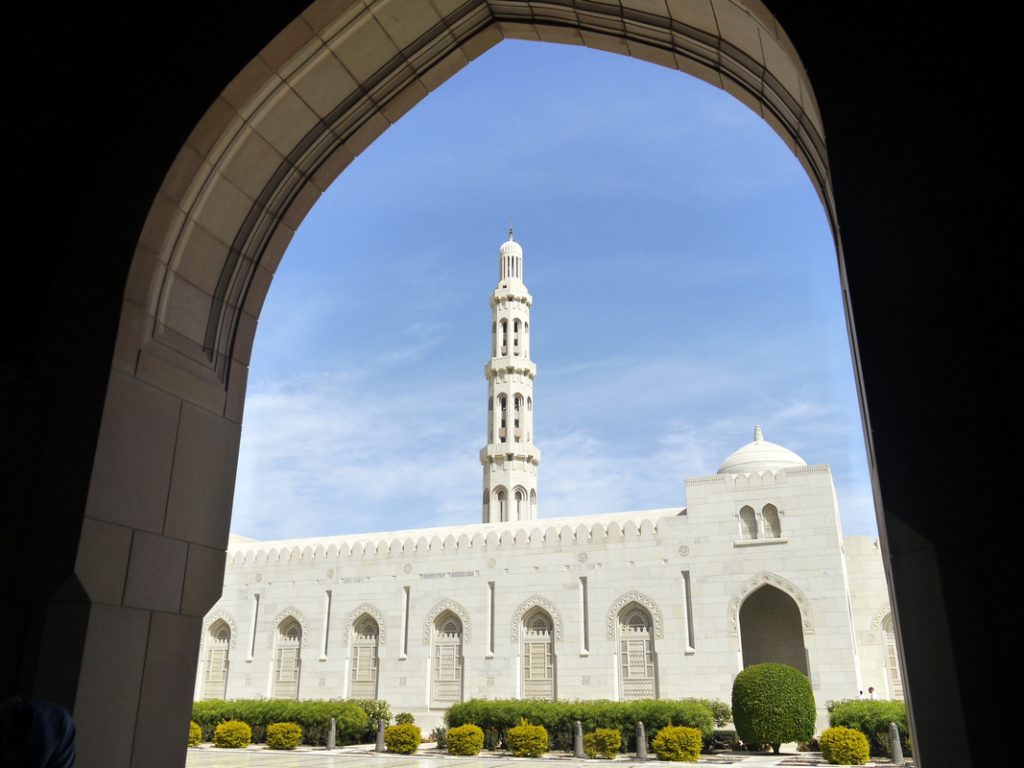 It took 6 years and 4 months to build this impressive building which boasted with two world records for some years. Of course, I wanted to visit the mosque – the only one in the whole country which is open for non-muslims as well.

In all guide books, there is the information that Oman is a conservative country and you should be dressed properly for a visit to a mosque. For men, long trousers are enough but women have to cover their ankles, arms and hair. I put on the longest skirt I have, a scarf on my head and a jumper with long sleeves. I critically looked at Dutch women from our group who tried to roll their leggings down to their ankles. With every single step, the leggings pulled back upwards. Our guide approved my dress and while he was reprimanding the Dutch ladies I headed for the areal of the mosque. Two “fashion policemen” in long rosy galabyas and with turbans on their heads were standing near the entrance. I almost passed through when I heard a resolute “Stop!” One of the men refused to let me in because my skirt had a vent on the back! A short one, but still. 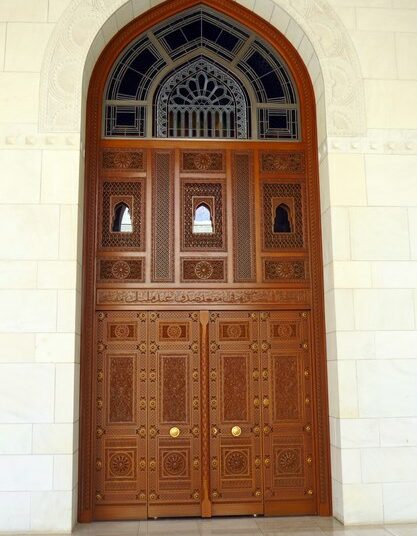 Although somewhere I had read the information that it is possible to borrow some clothing at the entrance, they did not offer anything to me. Our guide hurried up to me and because I was the only one (!) who was not allowed to enter he tried to help at least with the question if I had tights. Can you imagine? I did! I do not know what a premonition I had in the morning but – although it was 35° C – I had put a pair of nylon knee-high stockings in my handbag! Being very proud of my foresight I went to the toilet to put them on. I came back smiling and… The man uncompromisingly said he would not let me in because the tights had the same colour as legs!!! Which meant I had travelled such a long way to Muscat only to not be allowed to visit the mosque of the Sultan? Well, my dear Omanis, you do not know the inventiveness of a Slovak woman! I knelt down and knotted both cut skirt parts together. The man tried to argue that I will not be able to walk like that. His look said everything… 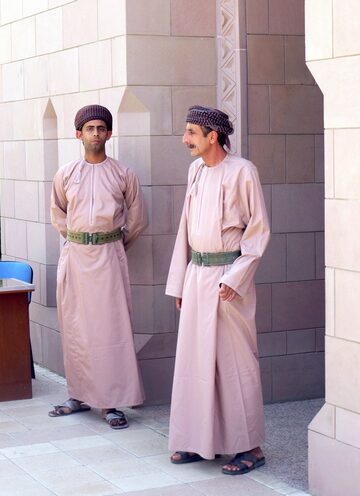 But I just said that this was already MY problem and rushed after my group. Well, maybe “rushed” is not the proper word, it is better to say: I was scuttling like a Japanese geisha… 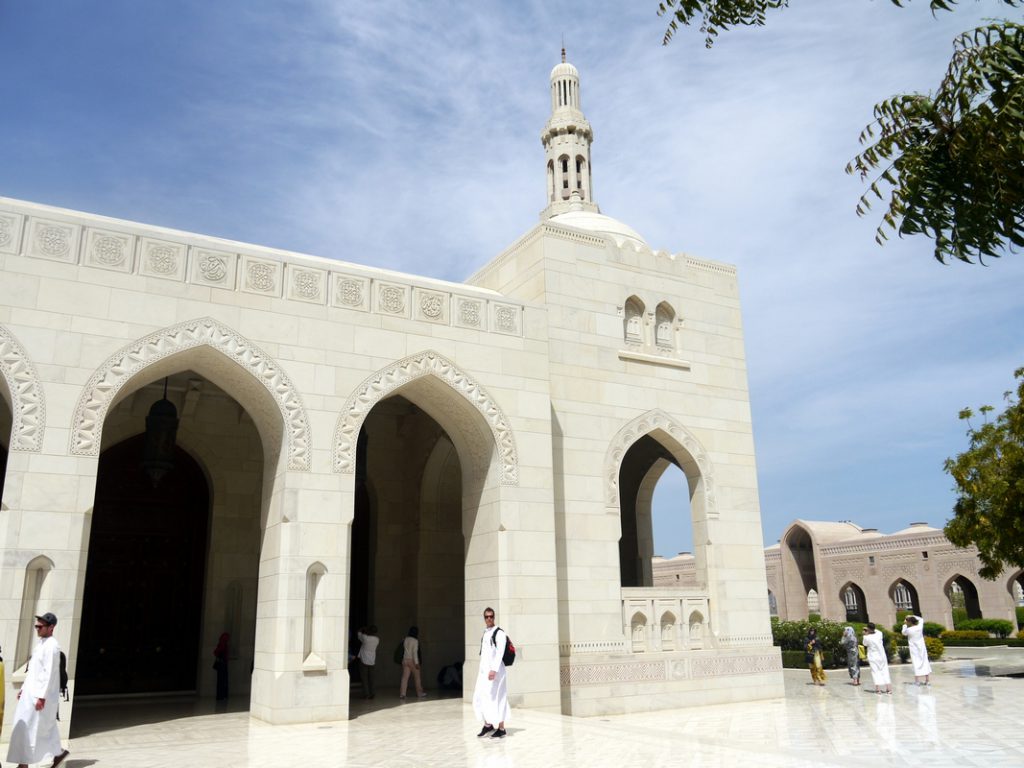 The mosque was built out of 300,000 tones of Indian sandstone. The marble pavement was so shining that you had the feeling you could do ice skating here… 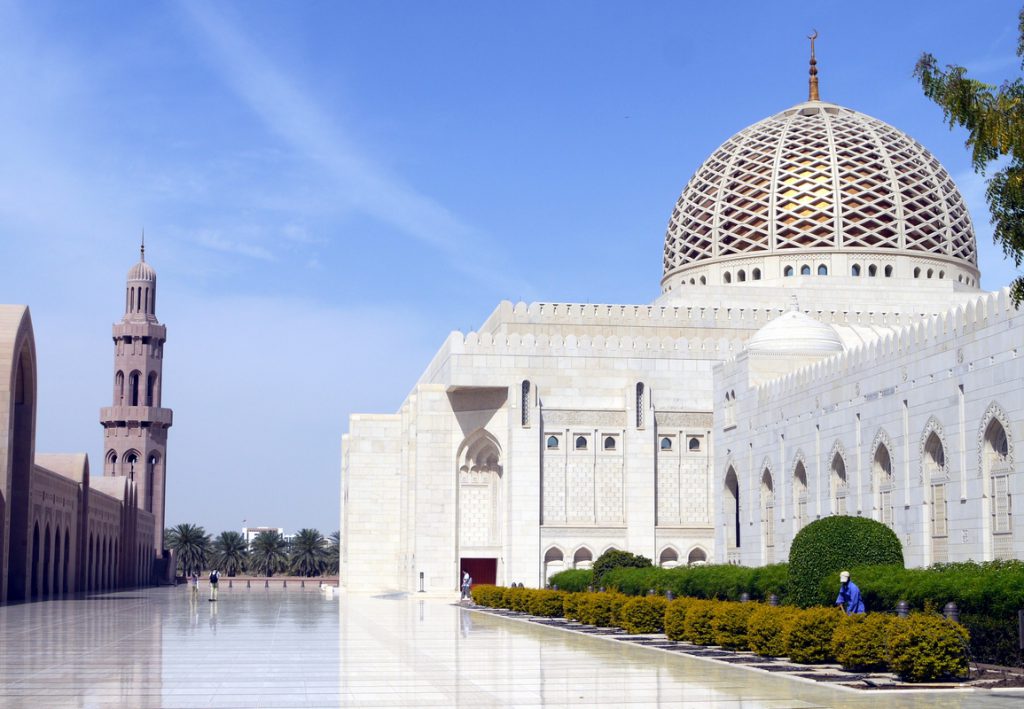 The interior is decorated with grey-white and dark grey carved marble tiles. Do not forget to take a look at the ceiling. Its creators found their inspiration in old Omani fortresses. Nevertheless, the main attraction in the room is the chandelier which had been the largest chandelier in the world for several years although it does not look oversized within the space. The chandelier was manufactured by the Italian company Faustig.

The Sultan Qaboos Grand Mosque had one more primacy – the world‘s largest hand-woven carpet (70 x 60 m). In 2007, the Sheik Zayed Mosque in Abu Dhabi was finished and the world records moved to the Emirates: the largest chandelier and also the largest carpet. But never mind, the Omani prayer carpet is still beautiful and impressive. It was woven together of 8 pieces, contains 1,700 million knots and weighs 21 tons. 28 colours were used in varying shades. It took 600 female weavers from Iran four years to make.

We also visited the prayer hall for women. It was significantly smaller and noticeably less decorated. However, the chandeliers there were nice as well. 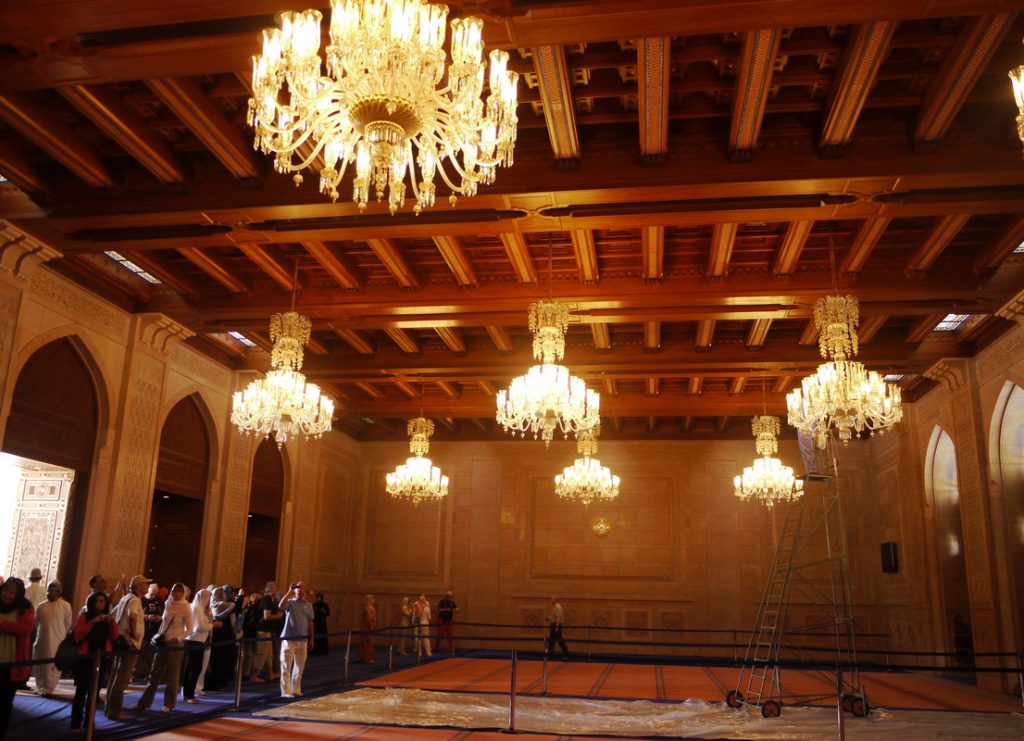 We walked around the outer ground. 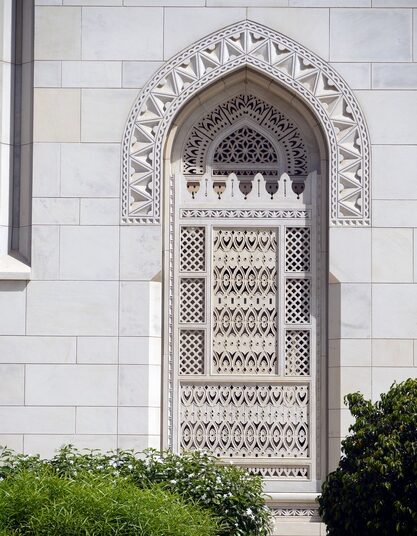 Surprisingly, there was a lot of green vegetation there: flowers, carefully trimmed lawns, bushes and trees. Among them also Neem trees – their slender twigs were chewed as a toothbrush by Omanis in the past. 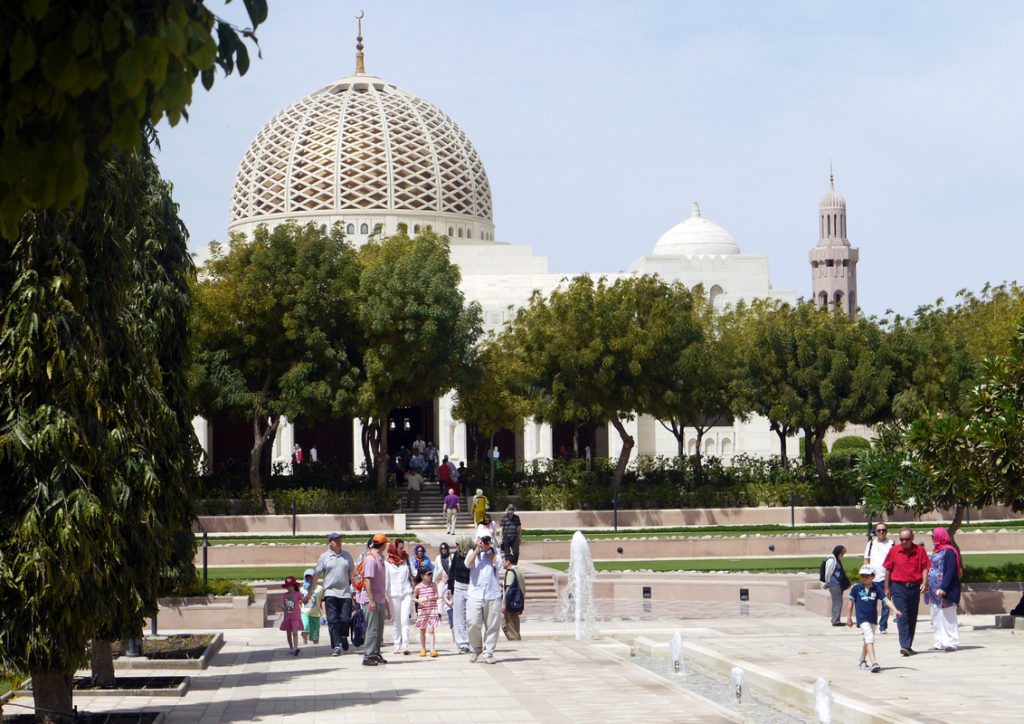 In Muscat, it is raining just once or two times a year, it is 50-55°C in the summer, there are no tourists after Mai. A new season starts in September again.

Slowly we were leaving the areal of the Grand Mosque. I was happy I managed to get into the mosque after all because this mosque is well worth a visit. But next time I better dress like this: 🙂 🙂 🙂 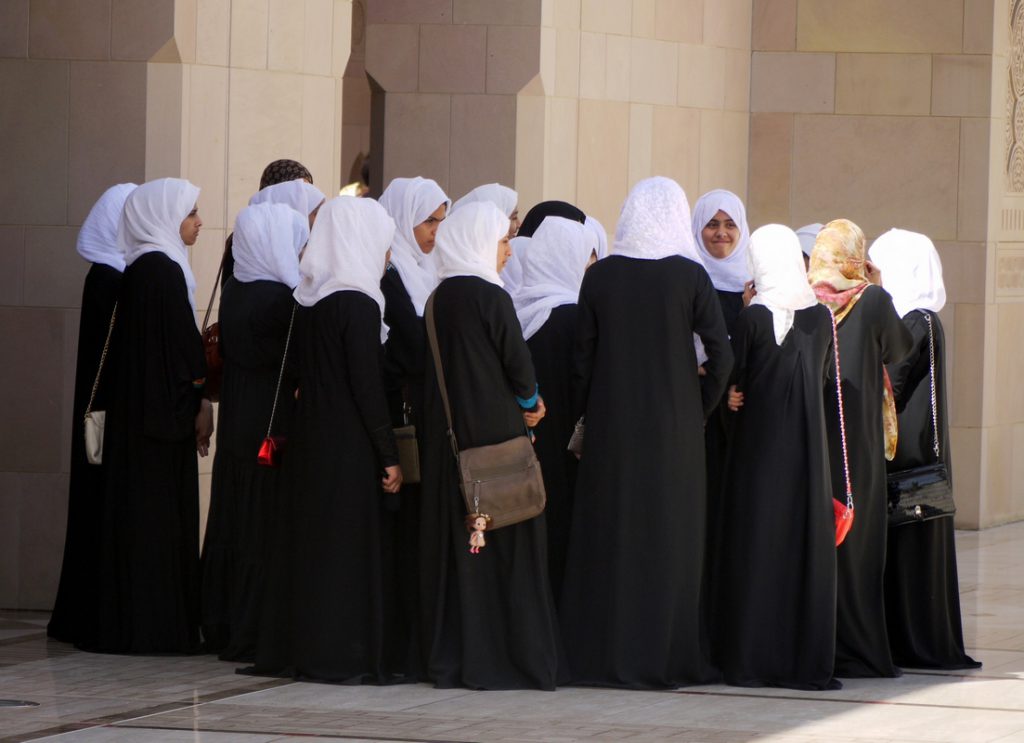 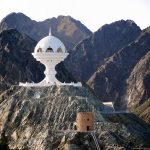 Oman – At the Market in Muscat 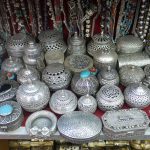 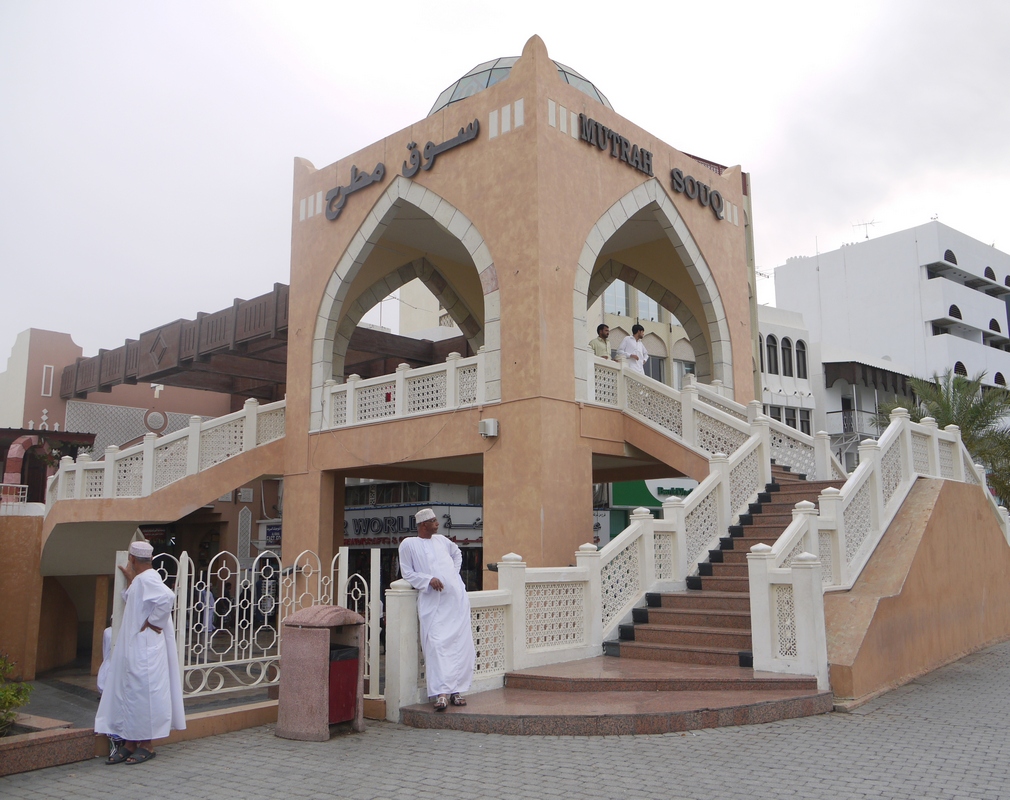 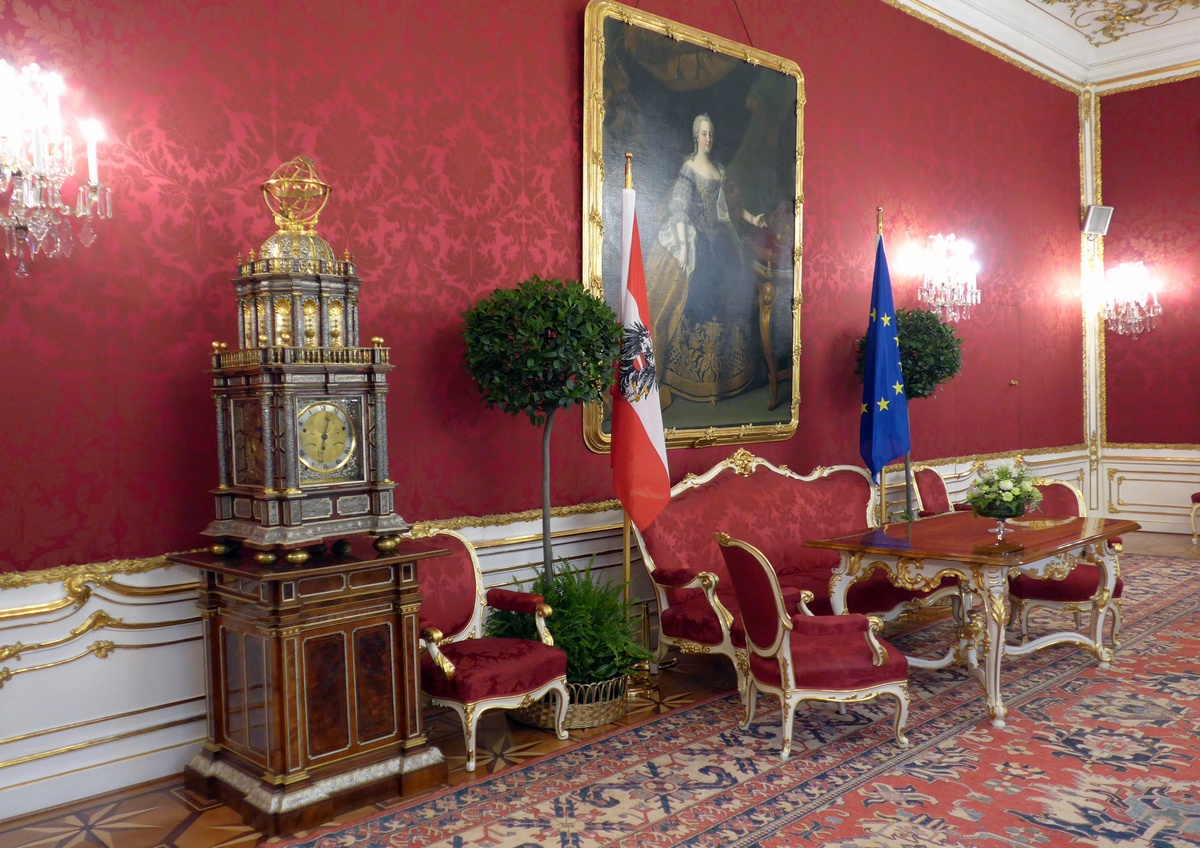